Here is a Predator spaceship overview from the Predator movies, games and comics. The Predators are known to use various types of ships with different design and capabilities. The Rage War trilogy even established that they cannibalize technology from other species and that there are no Predator spaceships that are alike. Most of these ships don't see much action and some tend to crash land. The Expanded Universe and it's crossover comics contain some rather ridiculous ship designs and they are in the of the list for your enjoyment. 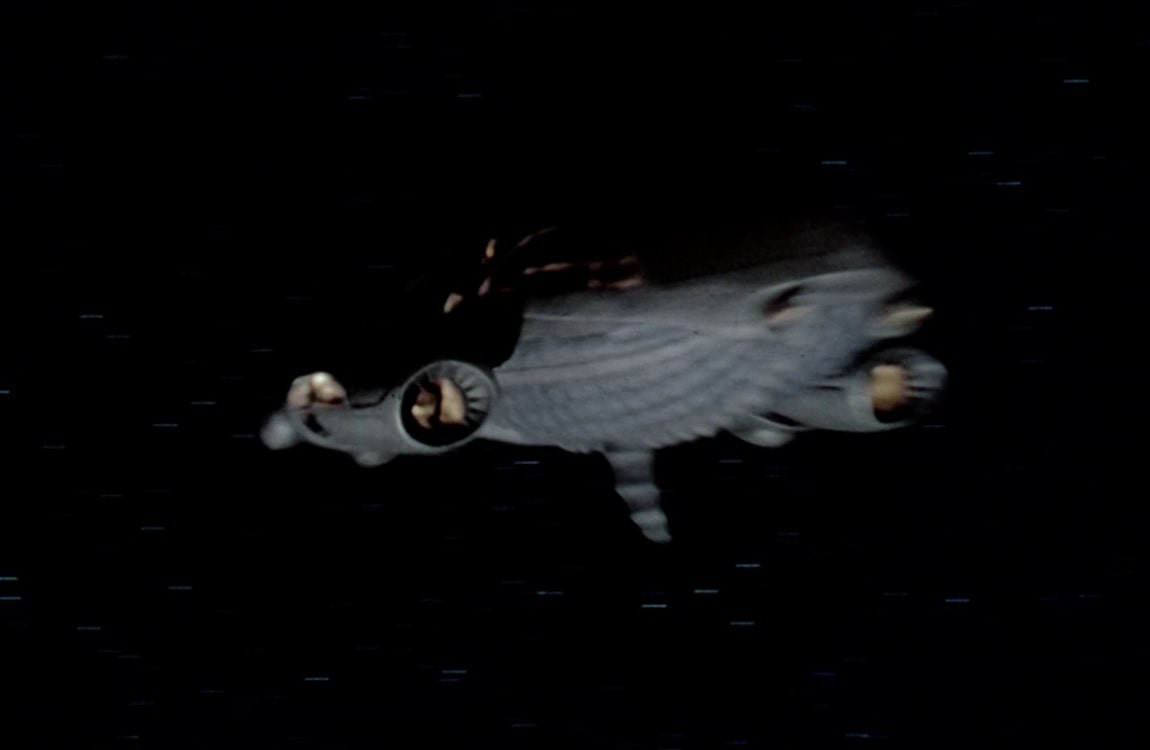 The Classic Predator Ship is probably the most well known Predator Spaceship. It has a fish-like appearance in order to help with the cloaking capabilities. It can drop Predators in pods from orbit so they can go on their hunting trips. It shows up in a lot of Predator media and varies slightly in color. In the movie it is grey, but it has also known to be brown and white. It appears to have two laser cannons or missiles in the front. 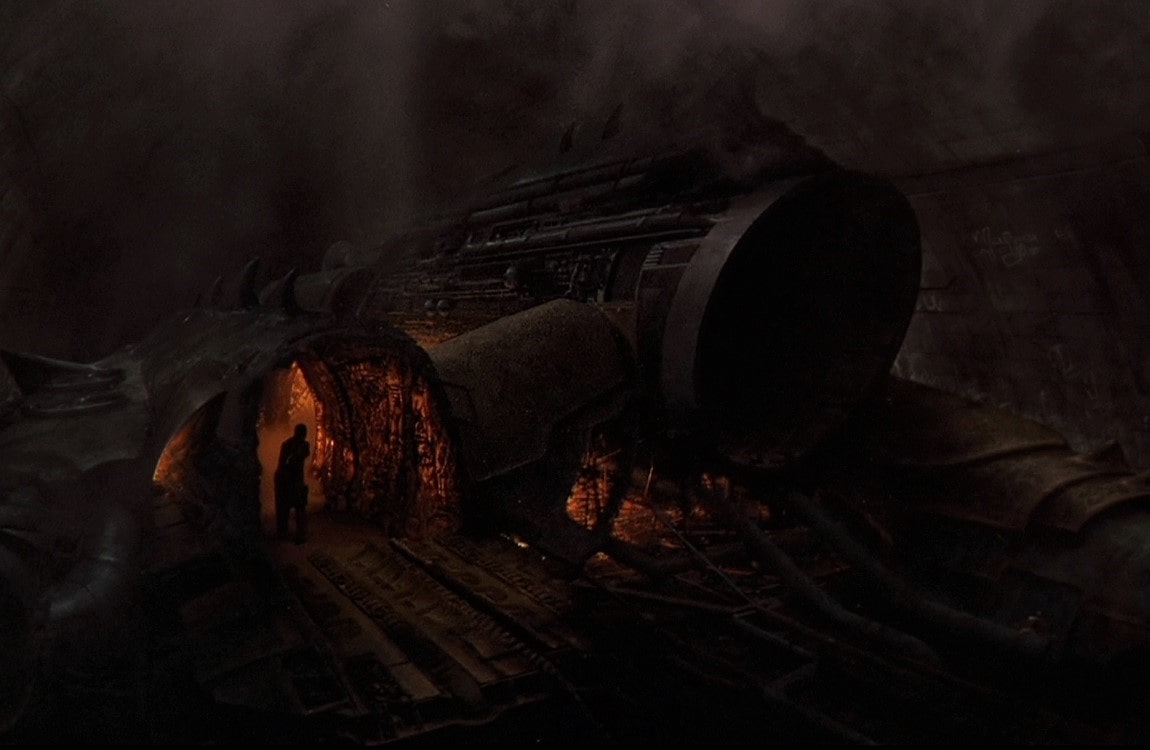 The Lost Tribe Ship was a ship hidden in the sewers of Los Angeles in the year 1997. It contained the Lost Tribe Predators and the trophy room with the famous Xenomorph skull. It was probably bigger than the Classic Predator Spaceship and longer in shape. The ship escaped from Earth after the events of Predator 2. 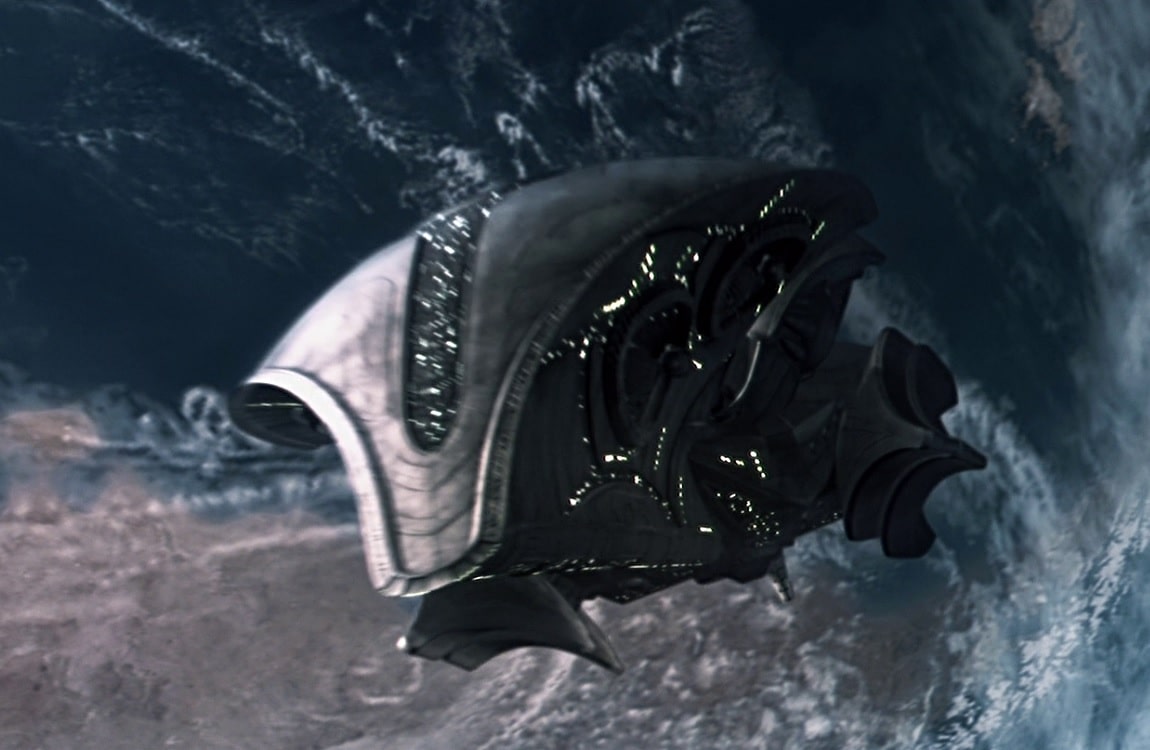 The Mothership is the biggest known Predator ship. The Predators have used them for over several millennia. Smaller Predator ships like the classic ship or scout ship can dock with the mothership. It has advanced cloaking capabilities and packs a lot of firepower. You see it destroying a Colonial Marine vessel in the opening of Aliens vs. Predator 2010 PC game. It also appears in the Alien vs. Predator movies, dropping the exotic tribal design of the interiors seen in Predator 2 for a more bland metallic look. 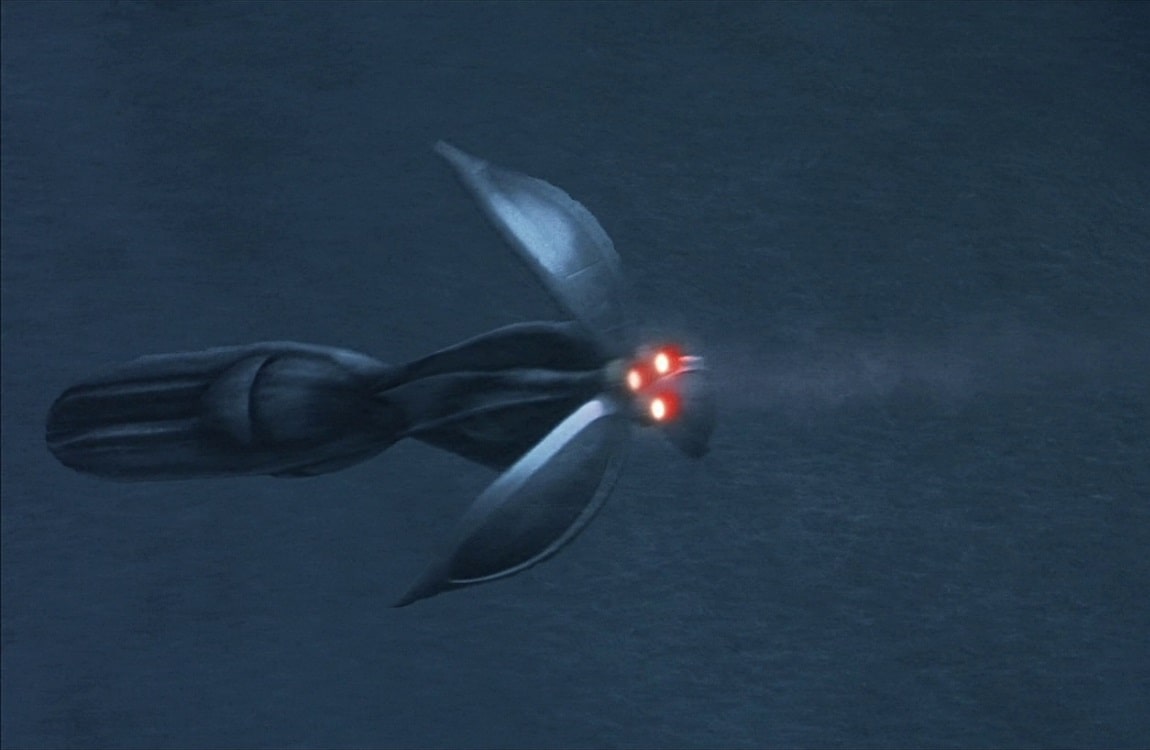 The Mothership does not just release smaller ships from its underbelly, it can launch tiny drop pods as well, designed for only one Predator. The three Young Blood Predators from the first AvP movie were dropped in Antarctica in such a way, and possibly even the first Jungle Hunter. The drop pods keeps the Yautja alive for a short while and have a small space for their weapons and gear. It has small engines for maneuvering to an exact landing site. 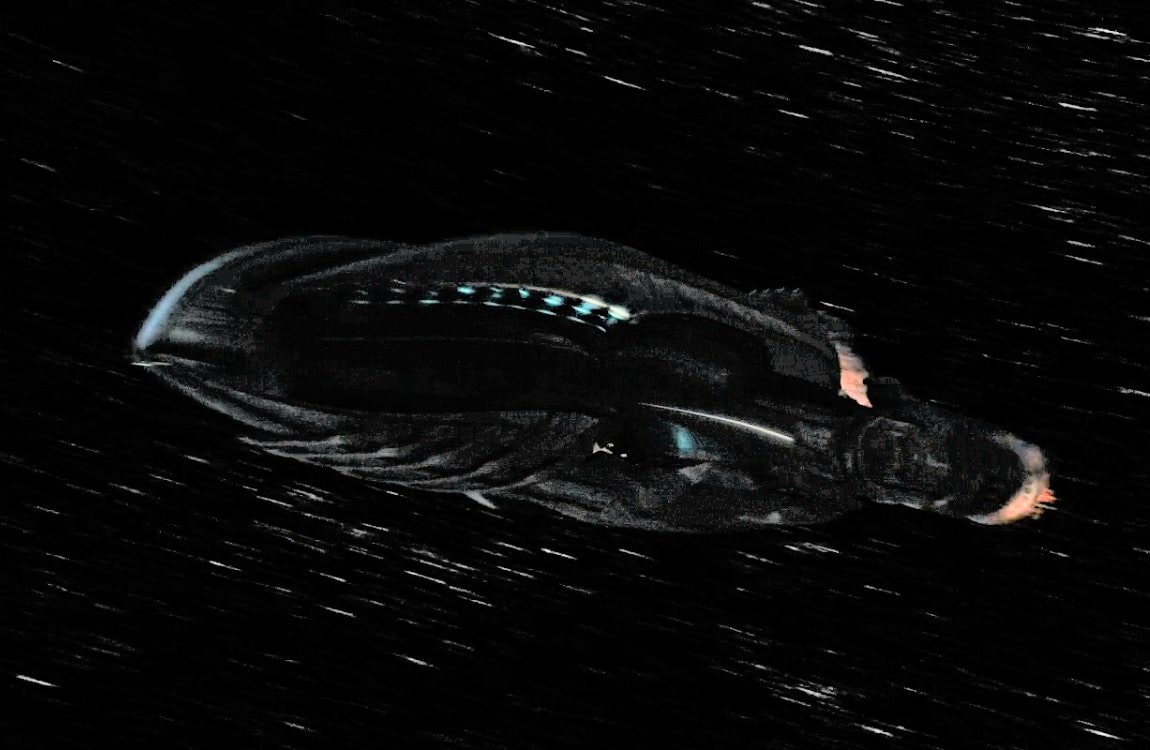 The scout ship is a similar ship to the Classic Predator Ship. It usually only contains a few Predators and is often docked to the Mothership. Scouts ships can also contain Xenomorph facehuggers for "seeding" other planets or for experimentation. When in trouble, the scout ship can send a distress signal far into space, reaching the Yautja Prime. A scout ship crashes on Earth in Aliens vs. Predator: Requiem and causes the big mess of events in the movie. 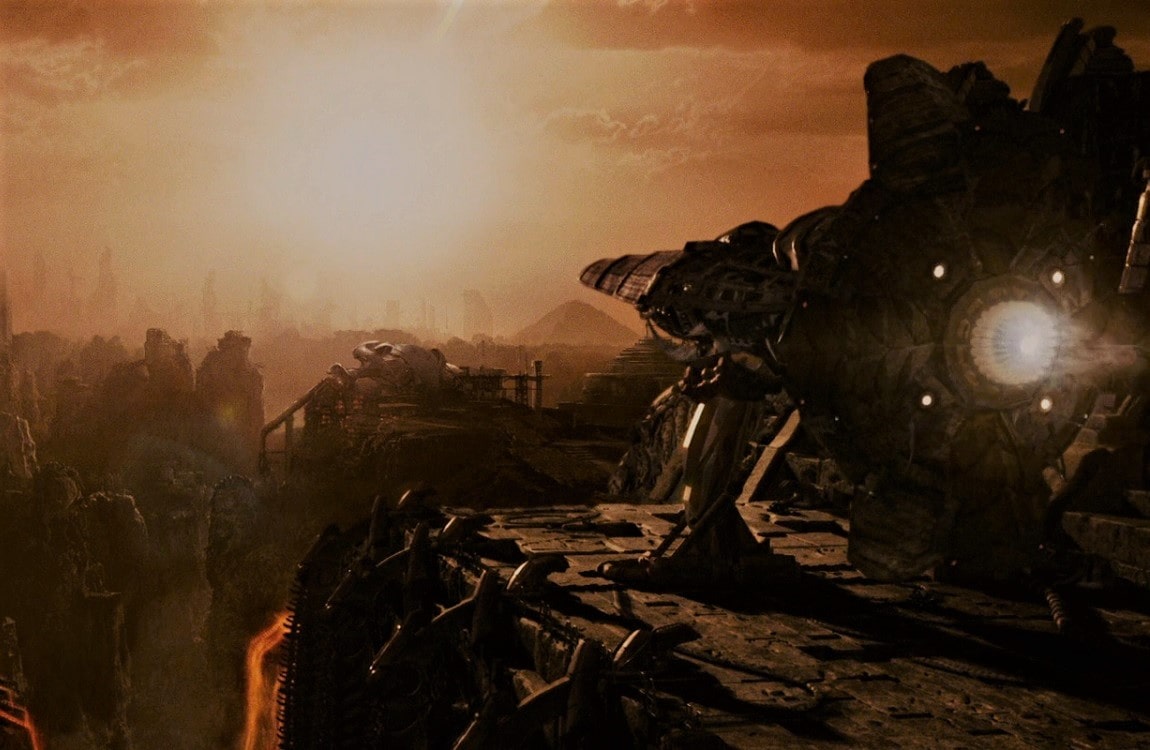 Wolf's Ship is a really fast ship originating from Yautja Prime in the movie Aliens vs. Predator: Requiem. The ship uses a more militaristic design and is not as sleek as the other ships. When Wolf received a distress call from the crashed scout ship, he set his course to Earth and arrived in a matter of hours. It was able to use a drop pod to send Wolf to Earth and probably stayed in orbit of Earth. Wolf died later and the ship could very well be still orbiting Earth. Note the other Predator spacecraft in the background of the picture. 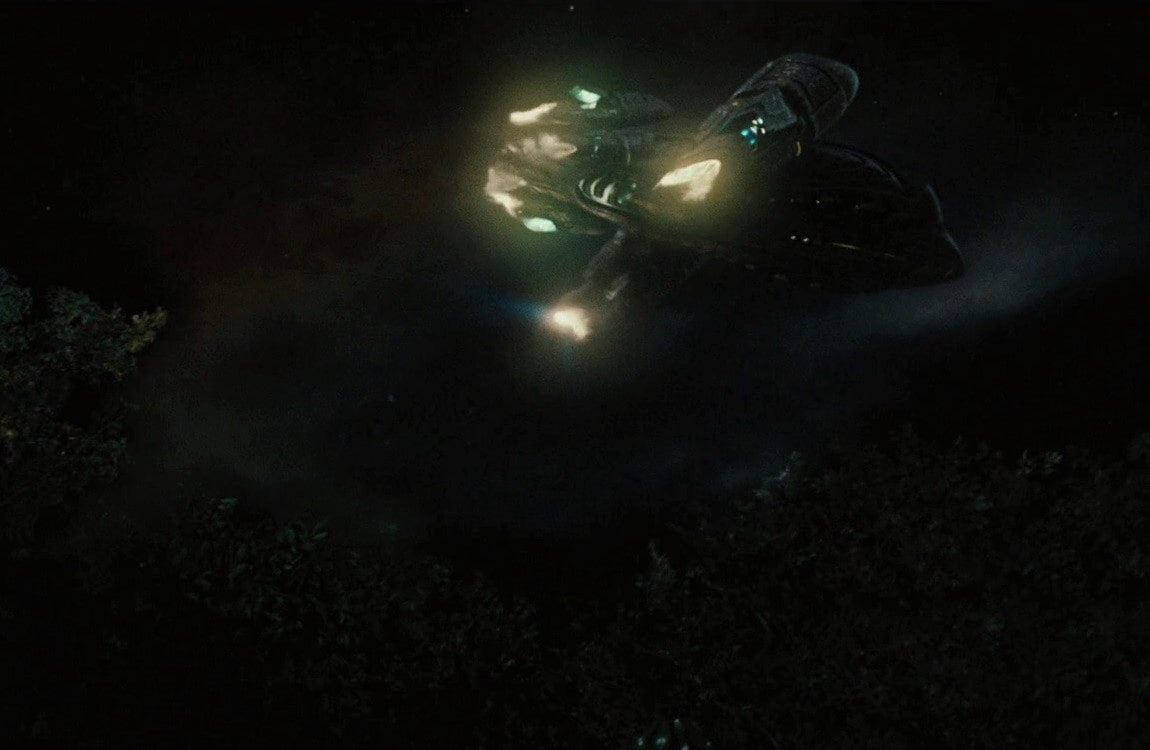 The game preserve ship was a Predator spaceship belonging to the crucified classic Predator in the movie Predators. He had a personal link to the ship through his wrist gauntlet. The ship had vertical thrusters and is one of the few Predator ships that is known to actually land on a planet instead of dropping drop pods or crashing. The ship was blown up by a super Predator, who surprisingly also had a link to the ship through the wrist gauntlet. 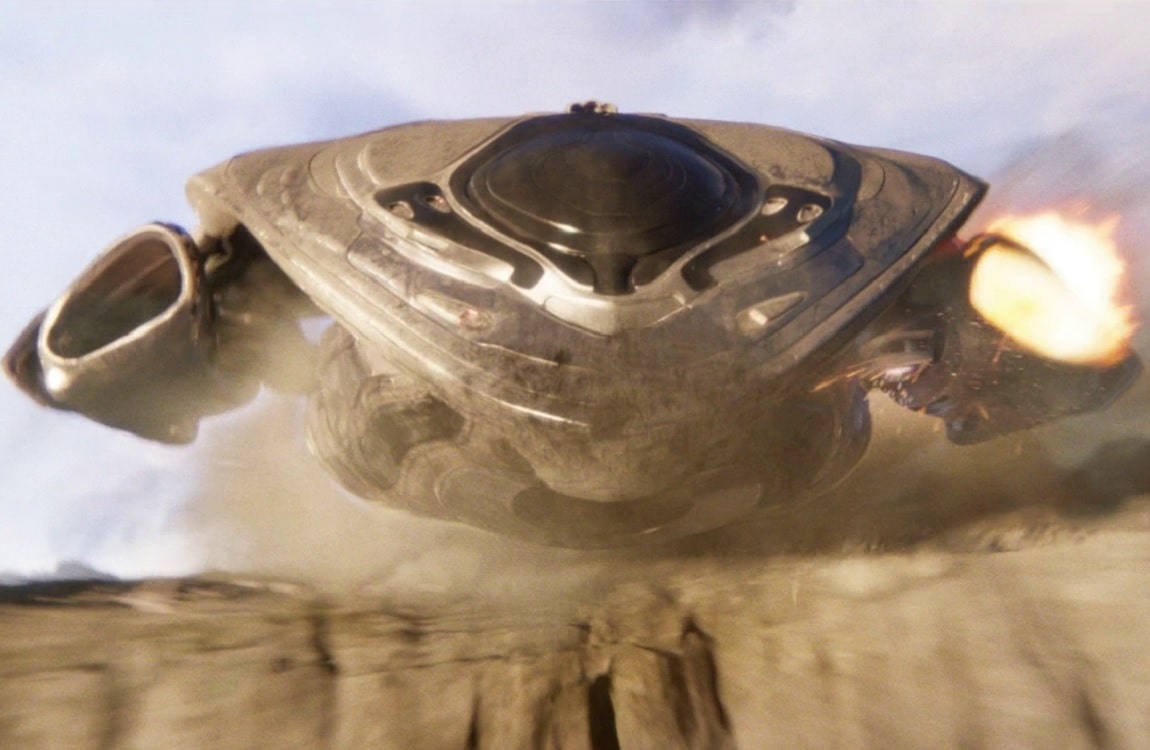 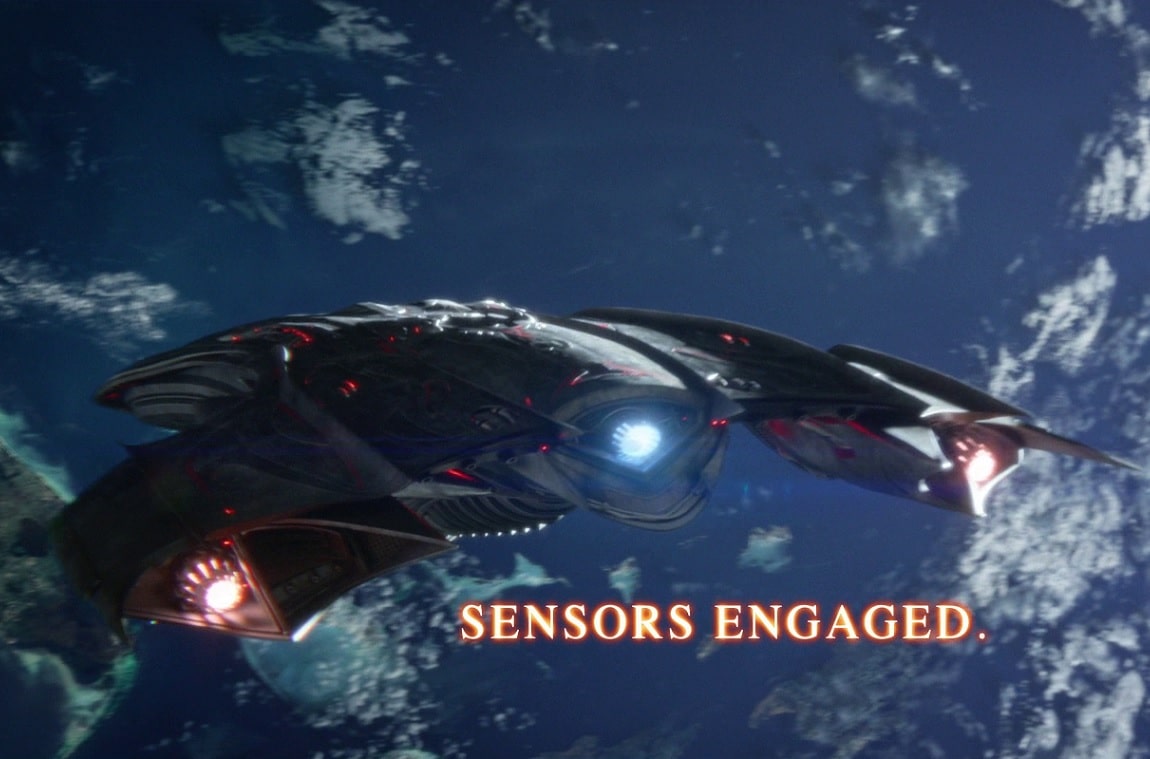 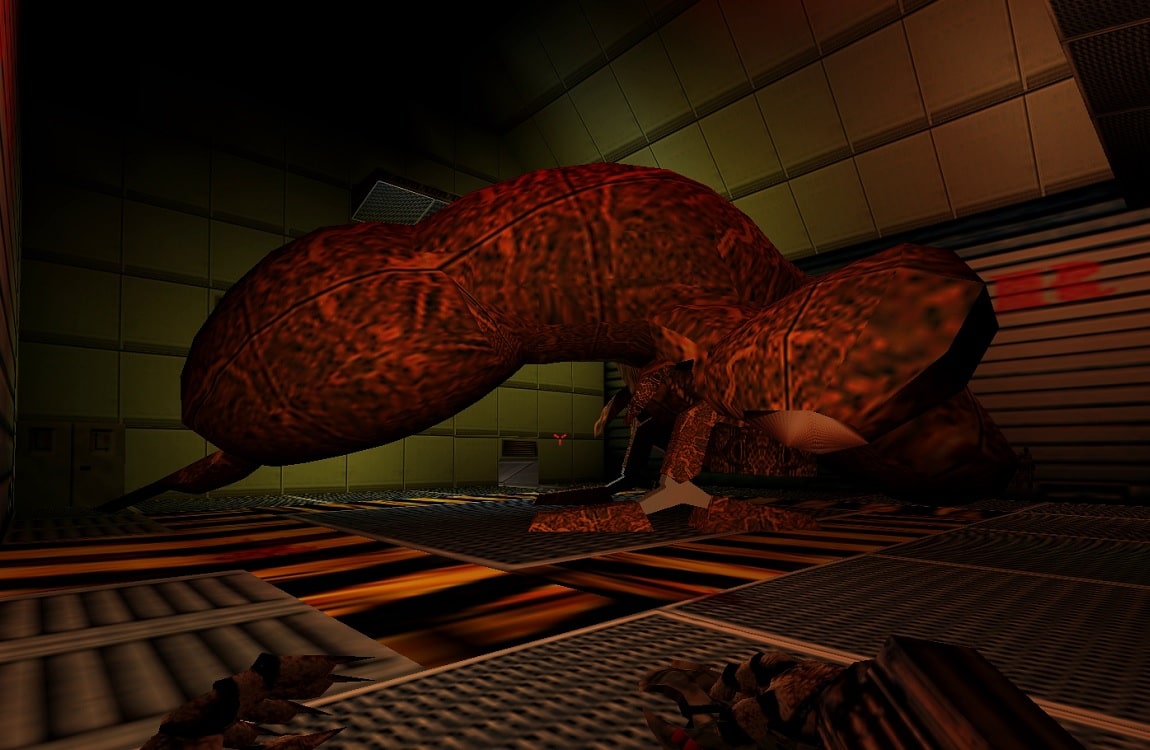 While many Predator ships look like fish, this one looks like a chicken. This individual ship was captured along with its only Predator passenger in Area 52 in the Aliens vs. Predator 1999 PC game. The Predator was experimented on and birthed a predalien. Another Predator reached the ship, retried the disc and pistol from it, and killed the predalien. Area 52 self-destructed and the Chicken Ship escaped with its new pilot. 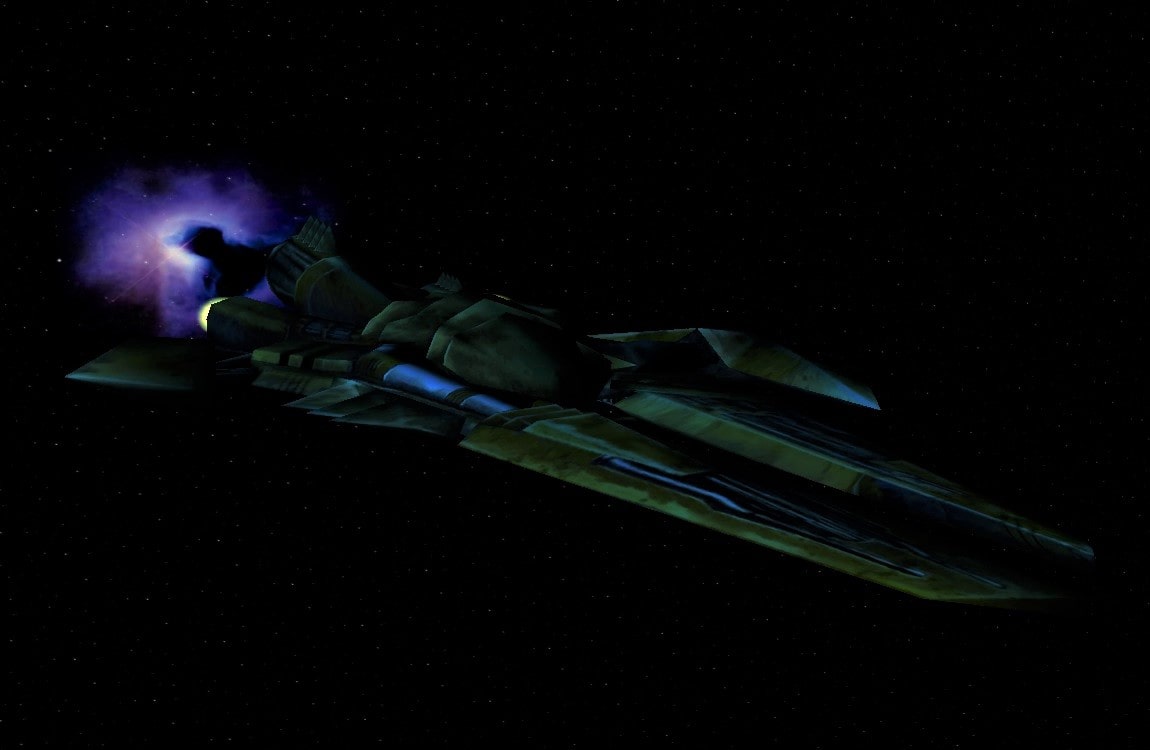 Prince, one of the main characters in Aliens vs. Predator 2 PC game, arrived on the Royal Predator Spaceship to LV-1201. The ship landed on a remote area of the planet to allow Prince to commence his hunt. The ship looked quite different from other Predator ships, having a long and metallic design (kind of like a spear), without and smooth edges. Although it had a cloaking device, it was still picked up by Weyland-Yutani sensors. 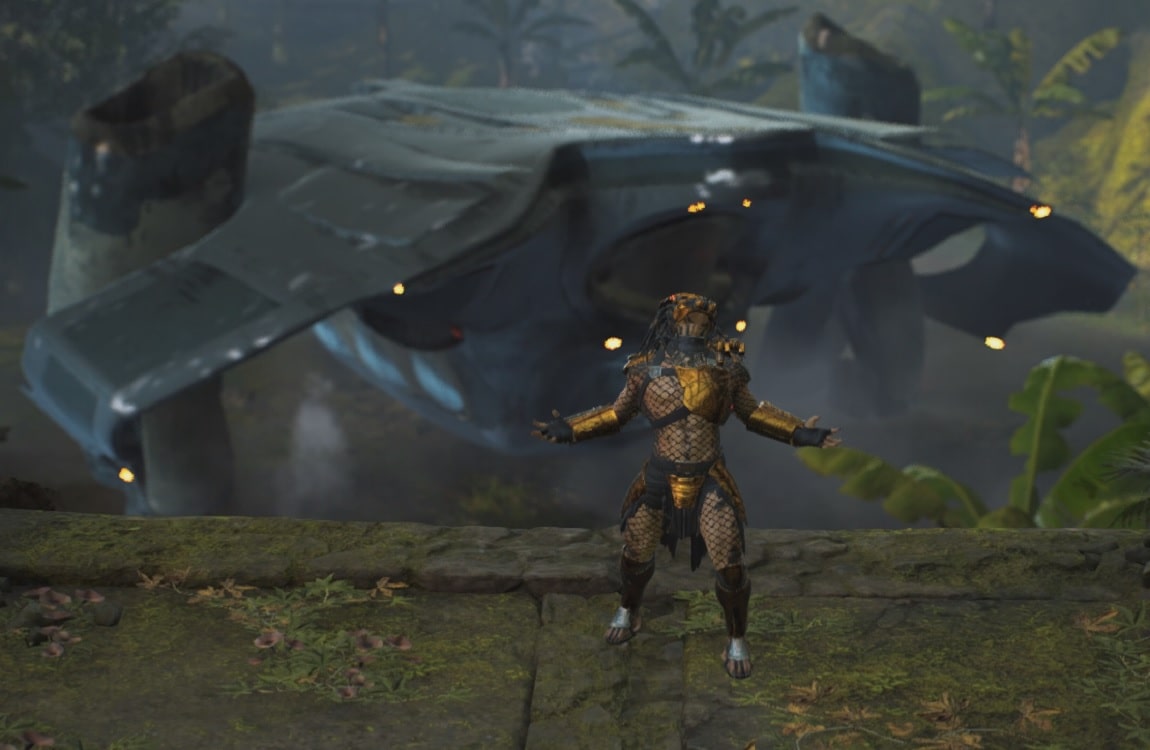 The only ship seen in the Predator: Hunting Grounds game briefly shows up at the beginning of the tutorial level. It looks similar to the design of the Fugitive Predator's ship from The predator, although more metallic in color. The ship must definitely have a cloak, but the Yautja does not activate it during the tutorial missions time. The game is missing a trophy room that would fit really well in a ship like this. 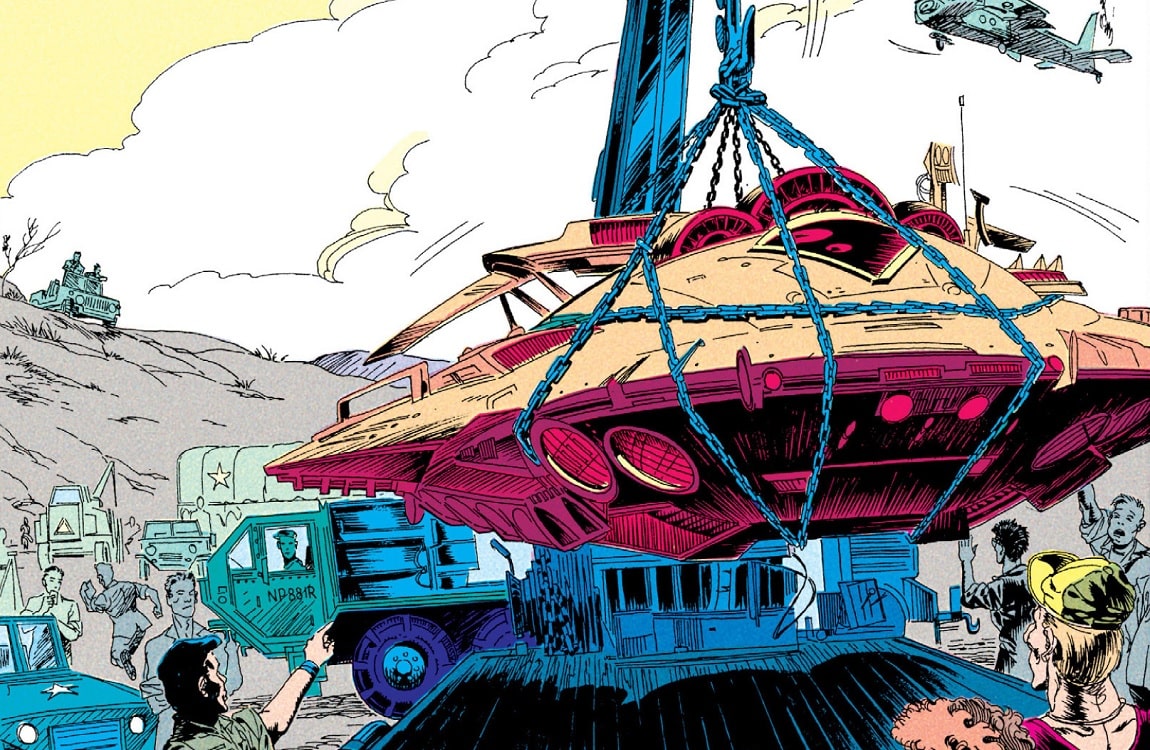 The Saucer is another unique type of Predator Spaceship that doesn't show up much in Predator media. The main Predator in Predator: The Big Game crash-landed in the Nevada desert on the saucer ship. The ship was captured by US military who started to do research on it. Unfortunately for them, the saucer self-destructed, taking the whole US army base with it. The Predator himself survived the explosion but was later killed by Corporal Enoch Nakai. 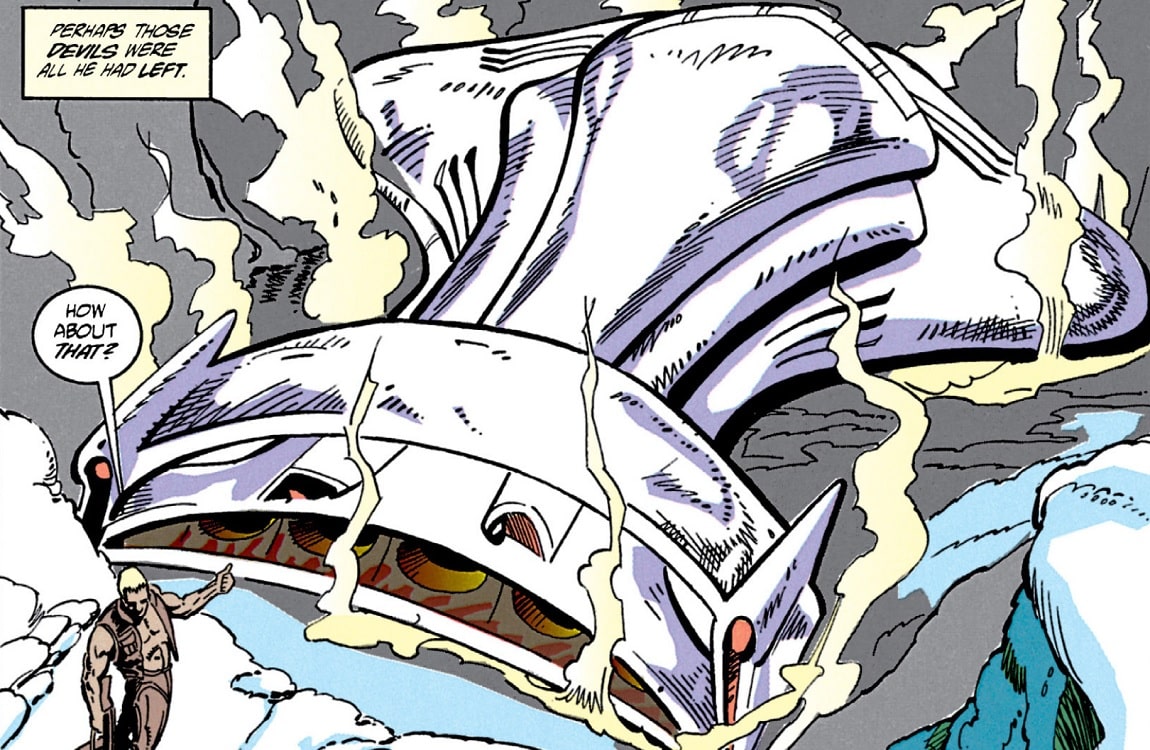 The Predator hunting party from the Predator: Cold War comic book arrived on this ship in Soviet Siberia. Although Predators prefer to hunt in the warm climate, they can also do so in Arctic conditions as their ships keep them warm. The interior of the ship looks very similar to the Lost Tribe Spaceship, with orange walls and a misty floor. The ship has a sleek design that slightly resembles the designs of Giger, and packs powerful engines. 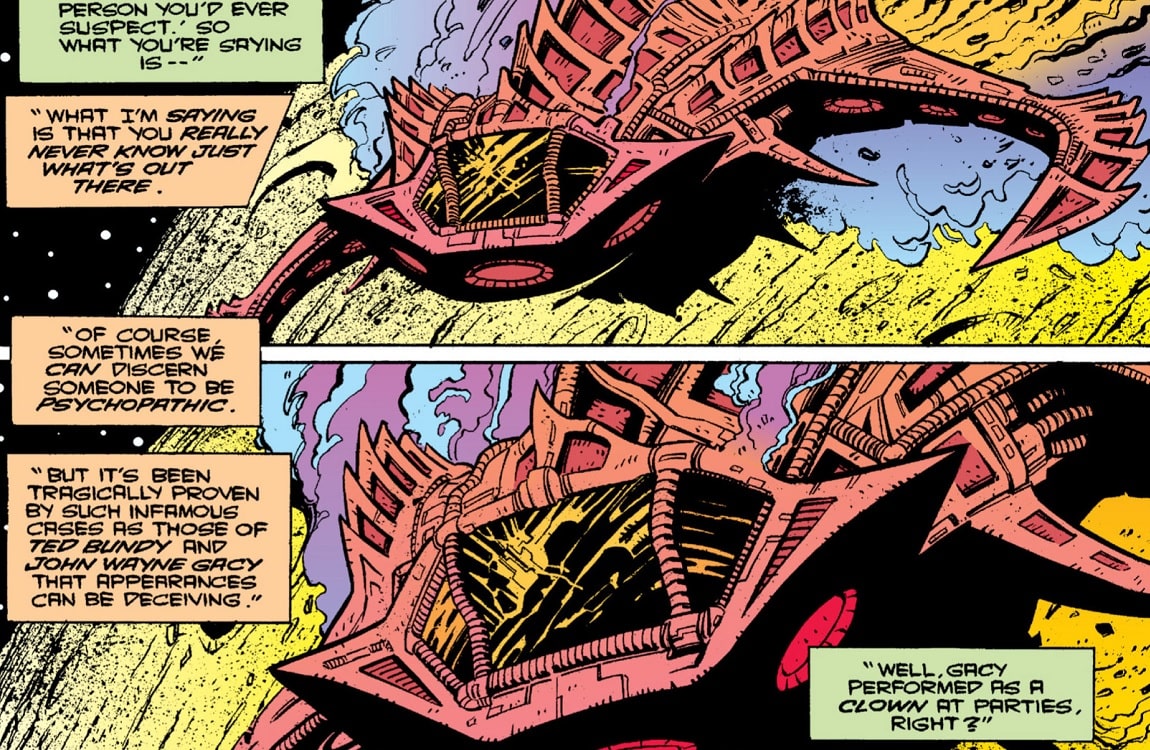 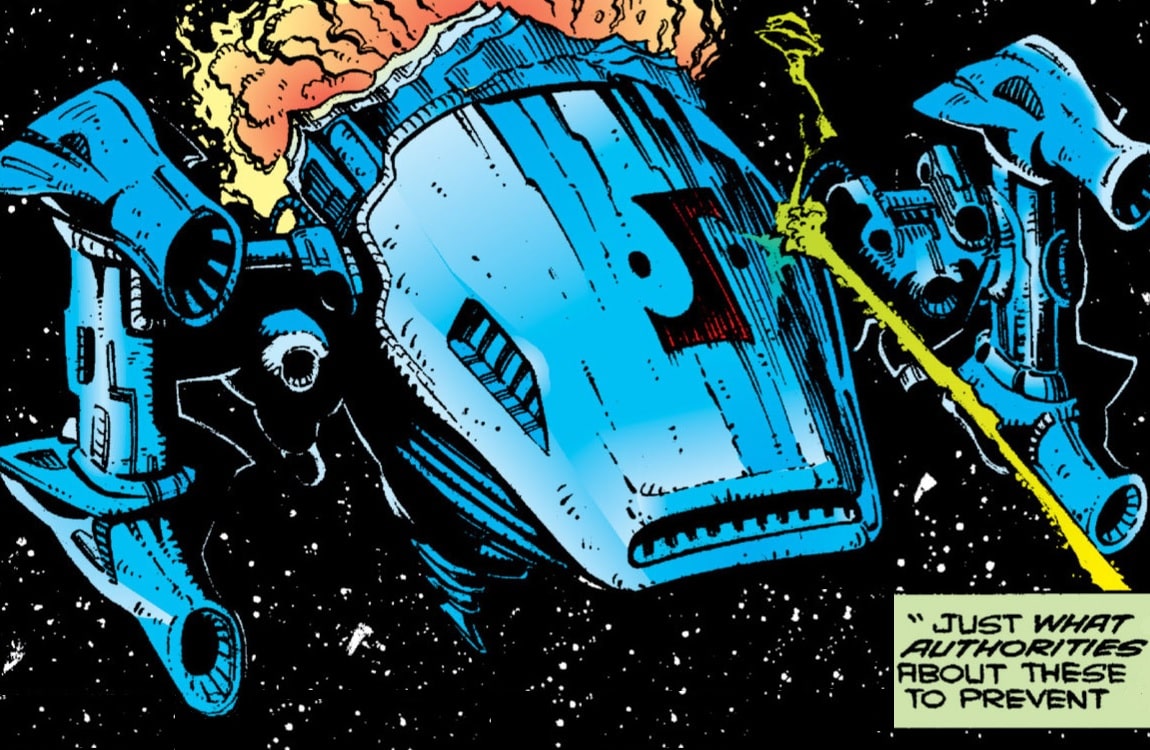 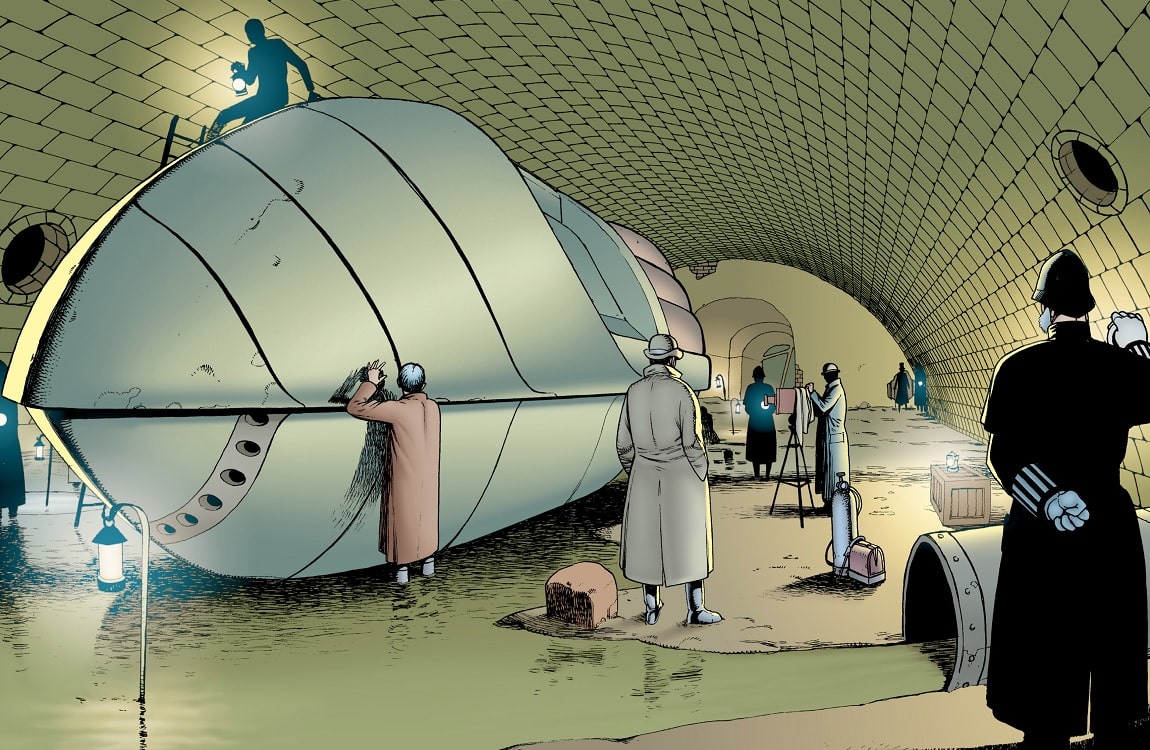 The Bullet is one of the most interesting Predator spaceship designs resembling a long bullet. The ship arrived in London in the Victorian age and was hidden in the sewers of the city. It came with a cloaking device but was still discovered by humans, including Inspector Lestrade. This spacecraft makes its only appearance in the Predator: Nemesis comic, one of the best Predator comics ever. The comic is basically a crossover with some of the characters from the Sherlock Holmes stories. 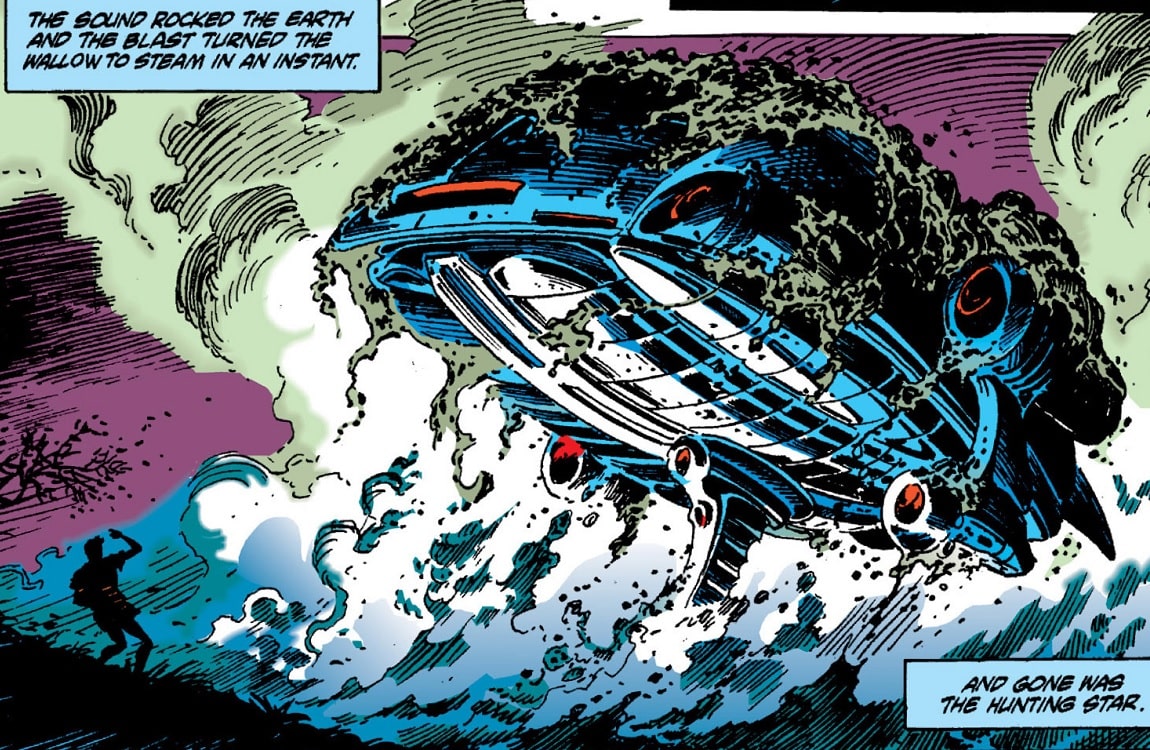 The Predators don't hunt only humans on Earth. Sometimes they like to go on actual safaris in Africa to hunt big animals. The Safari Ship design is similar to the Classic Predator Spaceship, but is more metallic. Hidden underneath the Safari foliage, it was not actually cloaked, as there was lesser need for concealment in Africa. The Safari Ship makes an appearance in the Predator: The Pride at Nghasa comic book. 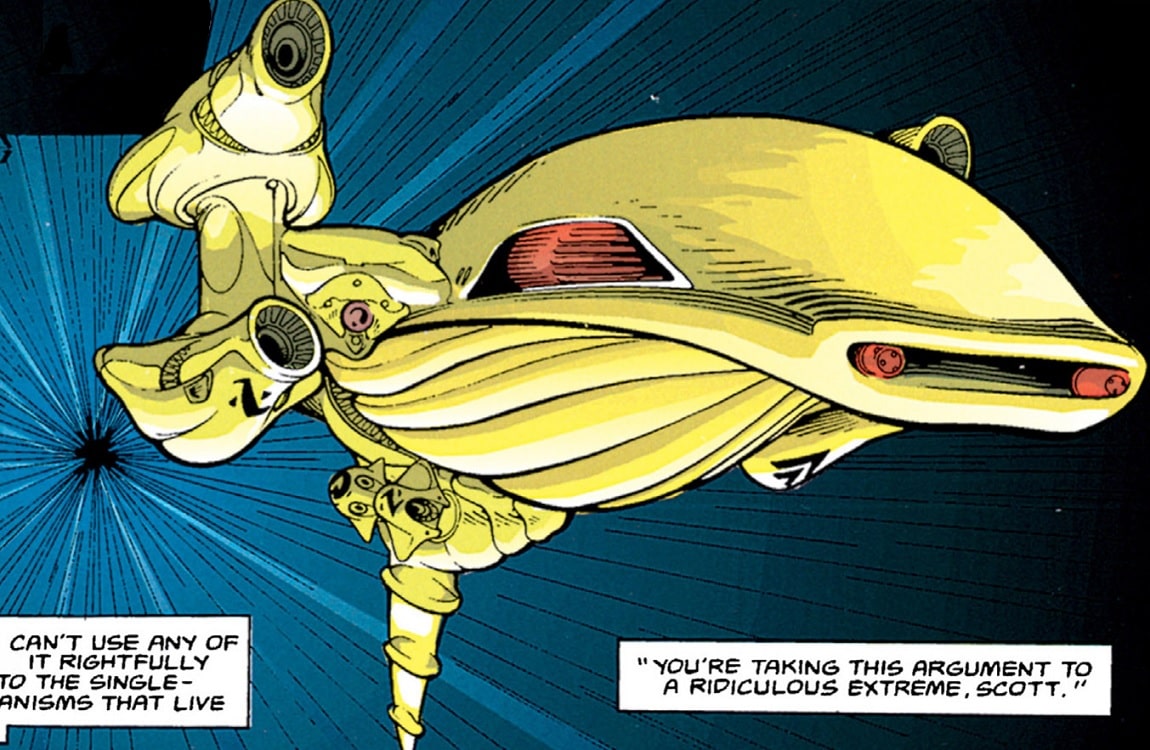 The Golden Mothership was one of the bigger Predator ships, possibly the same size as the regular mothership we see in the movies. It housed an entire clan of Predators which can have hundreds of members. The Golden Mothership contained an Alien Queen which layed eggs for the Predators to be used in seeding planets. The Predator spaceship contained both drop pods and shuttles for easy escape or for making planetfall. Note the drop pods on the lower part of the ship and the 4 engines, which is more than the classic Predator ship. Machiko Noguchi lived on a Golden Mothership for close to a year. 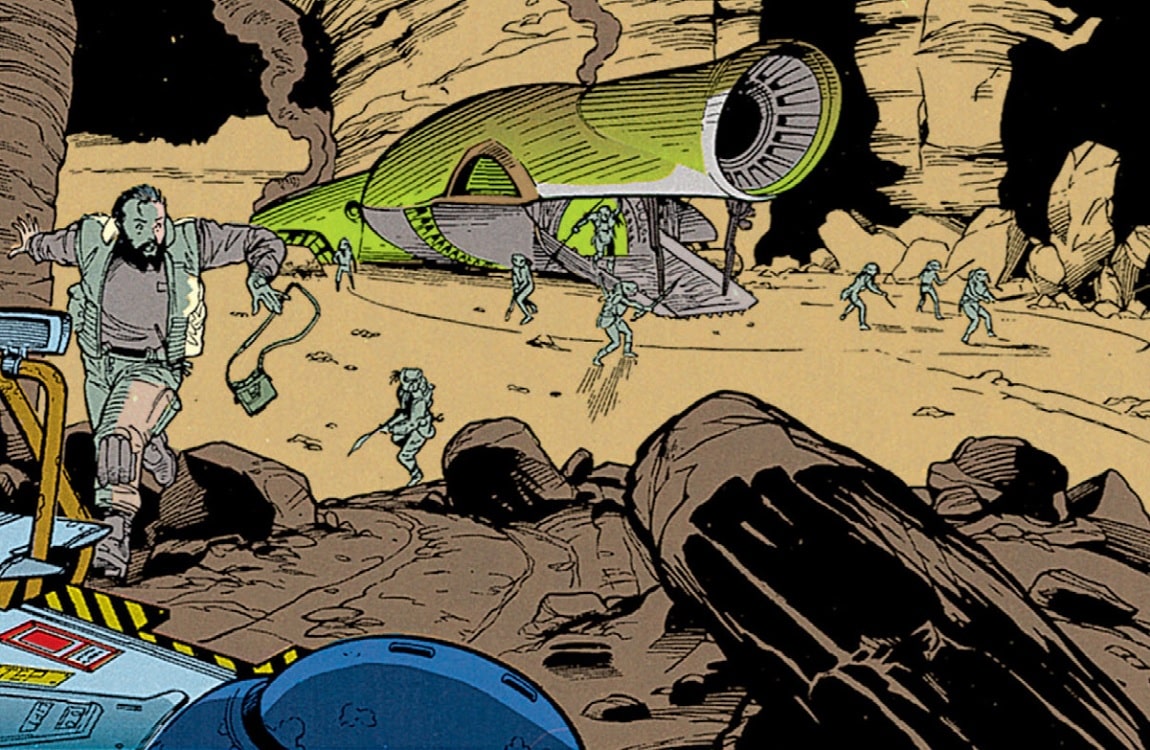 The Predator dropships are attached to a mothership and a Predator hunting parties can make planetfall in them. They don't come with any weapons and can actually be easily destroyed. For example, a dropship was destroyed on planet Ryushi when a human landspeeder crashed into it. The Predator hunting party was left stranded on the planet and all of them died later. 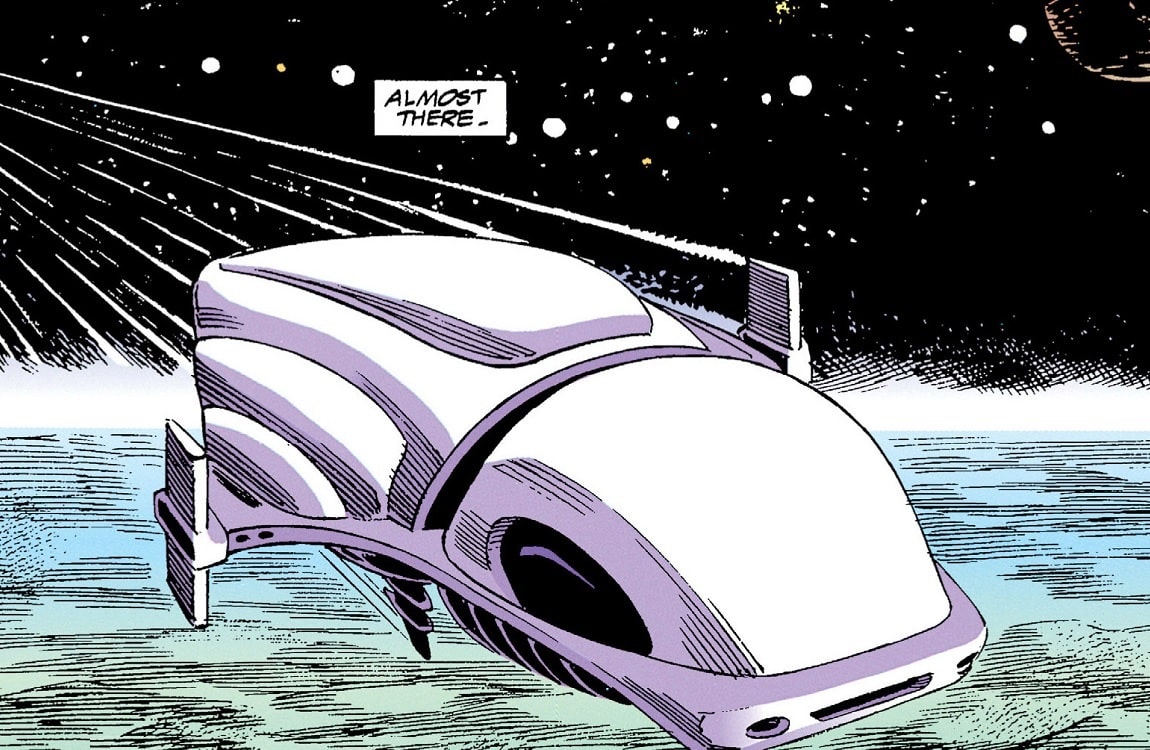 The Predator shuttle is a smaller type of spacecraft designed for planetfall from the Predator mothership. It is bigger than the dropship and actually has some weapons. The shuttle is colored white and resembles the classic Predator spaceship with its fish-like design. Machiko Noguchi used a shuttle to escape from the Predator mothership after she had fallen out with her clanmate Predators. The shuttle made an appearance in the Aliens vs. Predator: War comic book.

This big ship shows up in Gotham City in the epic Batman vs. Predator comic saga. The ship resembles the Classic Predator Ship but is more metallic and probably bigger in size. It has twin engines which are on the sides and is equipped with a powerful searchlight. The ship houses a hunting party of Predators that come into contact with Batman, who has defeated a Predator himself after a long struggle. 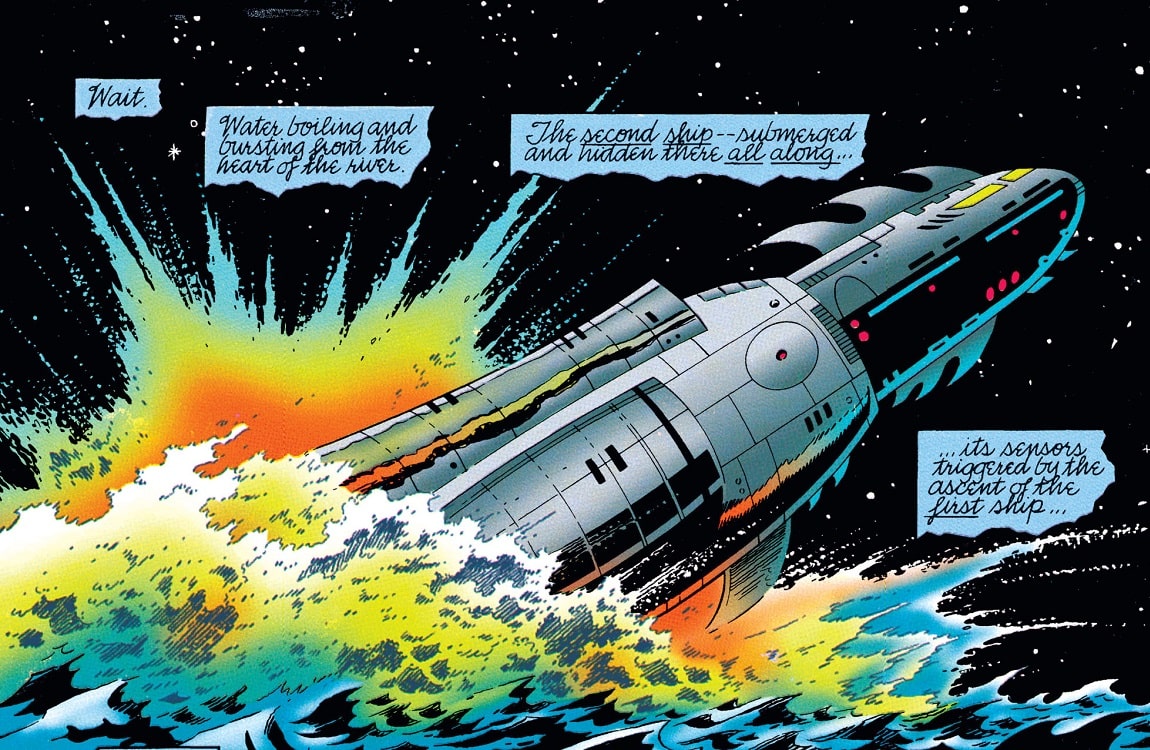 The second Predator to arrive in Gotham City was a Bad Blood, and he hid his traditional-looking Predator ship in a forest near the city. After he failed to kill Batman in multiple skirmishes and fought enforcer Predators sent to hunt him down, he decided to escape in his ship. However, an enforcer Predator ship emerged hidden from the waters of Gotham Bay and followed the Bad Blood to Earth's orbit. It then shot him with a red laser weapon, a rare case of ship-to-ship combat from Predator lore.

The dog ship resembles the head of a dog, although probably not intentionally. Otherwise, it has a sleep and brown design, similar to other Predator ships. The ship is not very large, operating only one pilot Predator. The dog ship shows up in the Aliens vs. Predator vs. Terminator comic book, released in 2000.

The JLA vs. Predator comic introduced Meta Predators, a group of hybrid Yautja who had taken over some of the abilities of JLA members. One Predator had the power of Plastic Man, and somehow this allowed him to transform into a fighter plane, chasing down the real Plastic Man (also in the shape of a plane) around Venice. It actually managed to do a good job of fast maneuvering and had powerful guns, but this was by far the most ridiculous Predator ship design by date.

Please note that the list is not definite, there are more ships in the Predator media. However, I the ones that look too much like the others have been excluded. Want to know more about the Yautja? Check out the list of the most Badass Predators and the best Predator Weapons.