The Yautja don't just hunt humans and Xenomorphs. They also enjoy a more traditional against a less intelligent but wild and powerful adversary, like a grizzly bear, mountain lion or a crocodile. These fights are often short and brutal, and the Predator does not always win. Here is an overview of different Predators hunting wild animals. As Peter Keyes said in Predator 2: "He's on safari. The lions, the tigers, the bears... oh, my!". 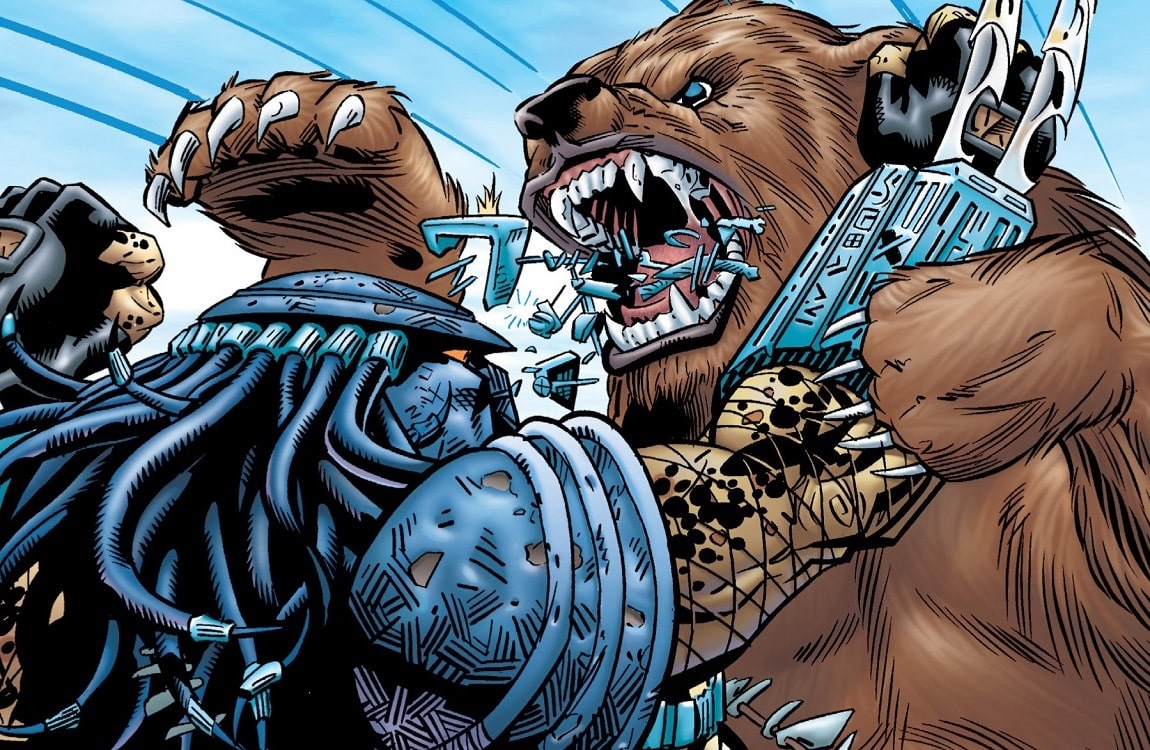 The Predators have hunted bears on numerous occasions and these animals seem to be their preferred non-human prey other than Xenomorphs. In Predator: Primal a lone Yautja hunted grizzly bears in the Alaskan wilderness of the Denali National Park and Preserve. After killing a mate of a mother bear with his shoulder cannon, he engaged the grizzly in melee combat and had the cannon bitten off. He lost the initial fight by falling off a waterfall. In round two, the Predator tried to use fire against the bear, but got mauled badly again. Giving up, he entered his ship and initiated the self-destruct device, killing himself but leaving the mother bear unharmed. 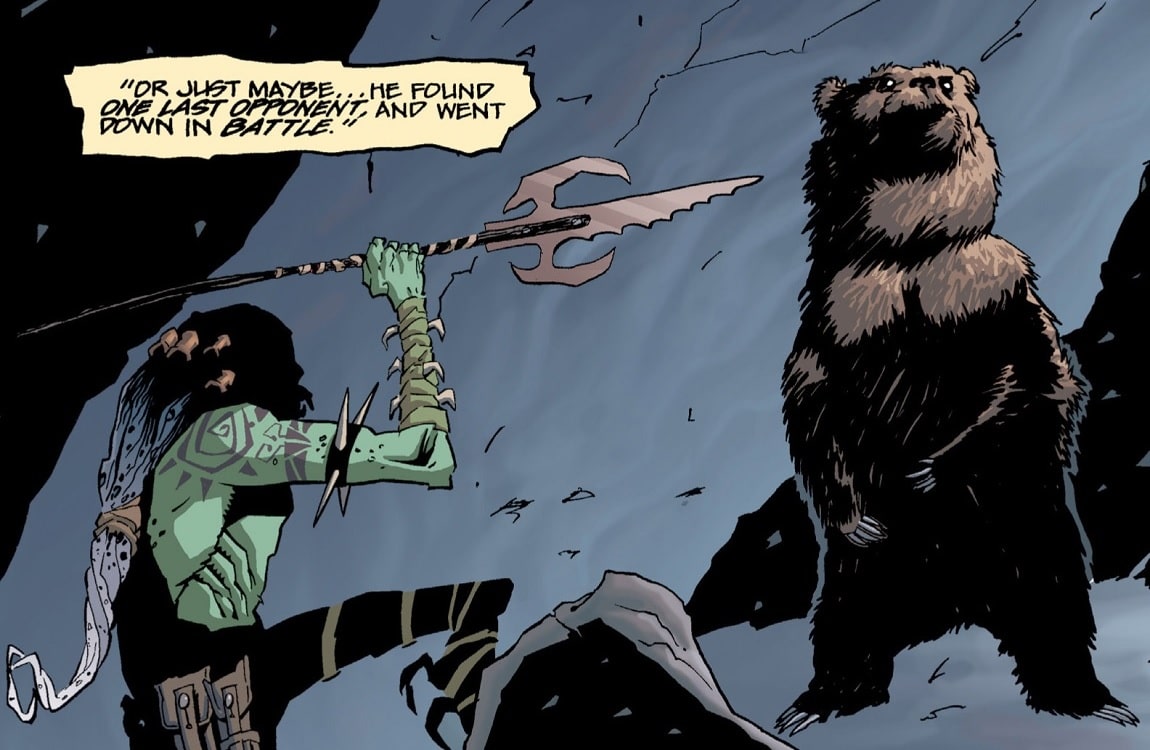 The Ancient Predator left the Predator Homeworld to hunt down three Bad Blood Yautja who had escaped to a national park on Earth. After hunting and killing them with relative ease, he took some time off and stayed in the park to hunt some game. He was last seen entering a bear cave high on a cliff edge, stalking a big bear with a spear. It was speculated that this could have been the old Yautja's last opponent in battle and he never returned to Yautja Prime. 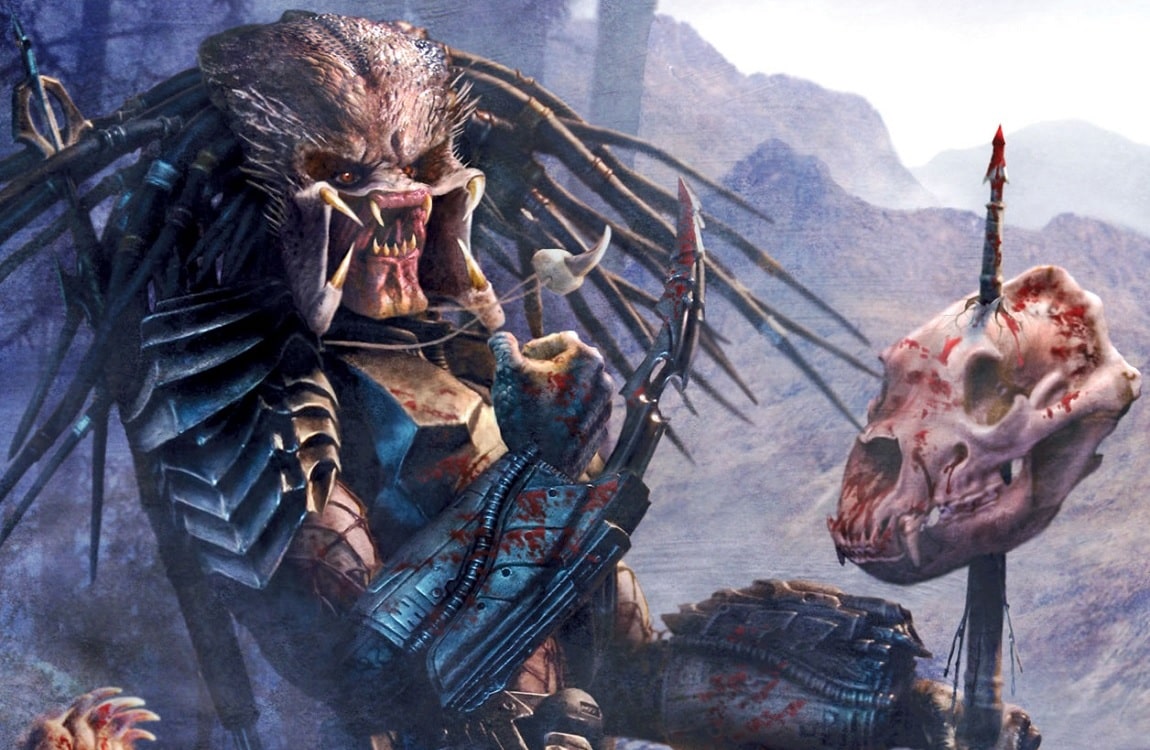 The Predators returned to the Alaskan wilderness in Predator: Turnabout, one of the greatest one-off novels from the franchise. The Yautja were more like background characters in the book, hunting grizzly bears while the story focused on Sloan, a forest ranger and an ex-military sniper. Sloan stumbled onto a fight between a Predator and a bear on a riverbank and could not believe what he was seeing. Although the Predator won the fight, the sniper later dispatched all the remaining Predators and escaped with his new lady friend - Mary. 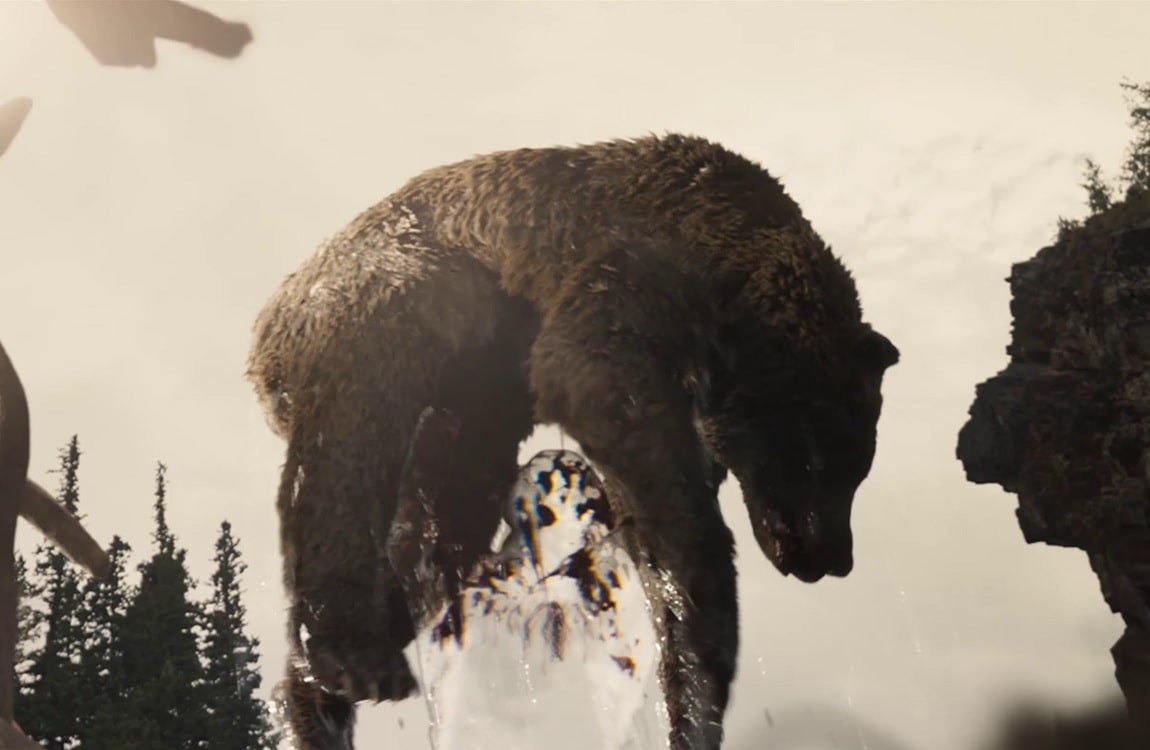 The Feral Predator is another Yautja who hunted bears, as seen in the latest Predator movie titled Prey. A female Comanche hunter named Naru tried to hunt a big bear herself but just made it angrier by shooting an arrow in its neck. She then dived into a river, hid under a beaver dam, and would have been mauled by the bear, if not for the Feral Predator killing it from behind at the last minute and saving her life. Feral then lifted the giant bear above his head in triumph while being cloaked. It is yet to be seen if he took a trophy as well. 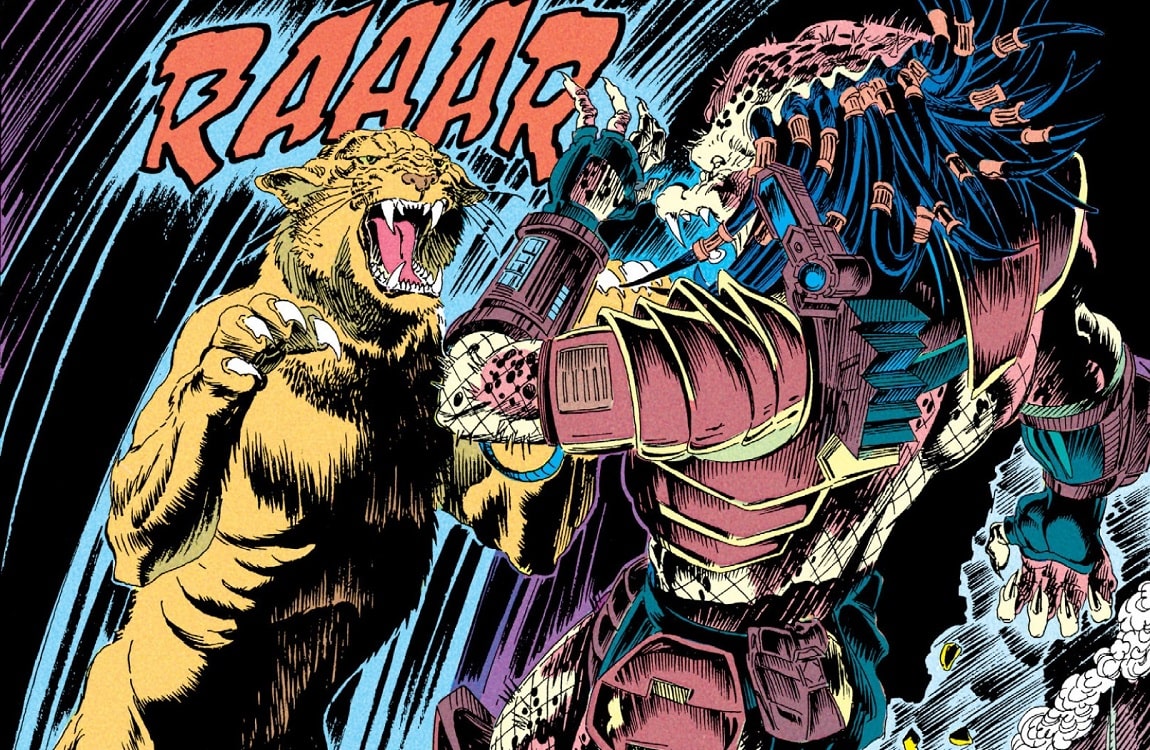 The crazed Yautja from Predator: Big Game landed in the New Mexico desert and proceeded to hunt both wildlife and humans. When the Yautja was resting by a fire in the middle of the desert, he was quietly approached by Enoch Nekai, a local Indian and a US soldier who was seeking revenge for his fellow soldiers. The Predator sensed his presence, but was suddenly attacked by a mountain lion, that possibly had a spiritual connection to Nakai and his dead twin brother. The lion was a worthy opponent to the Yautja, who was caught off guard. He received grave wounds to his arm, shoulder and face. It was implied that the lion was shot through the chest with the shoulder cannon and both Nakai and the Predator lived to fight another day. 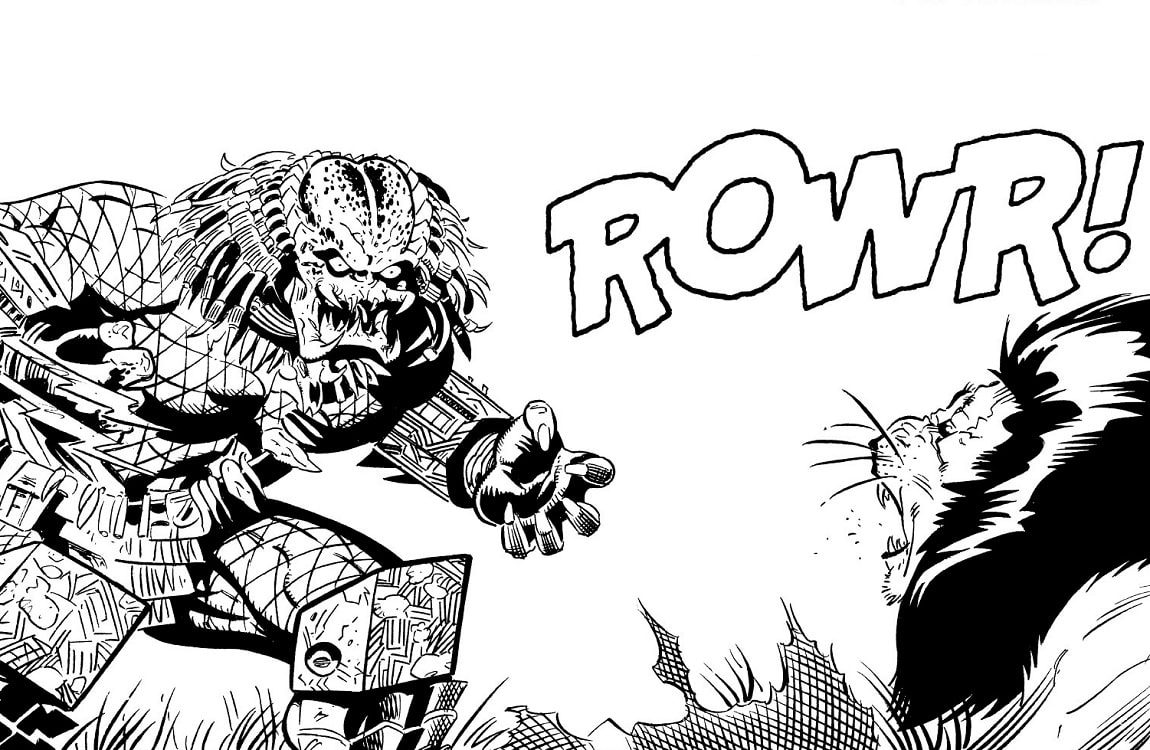 In Predator: No Beast So Fierce, the widow of Captain Trask put together a group of bounty hunters to hunt down the lion that killed her husband in the African jungle. The group found the huge lion and captured it in a net, but were soon ambushed by a Predator. The jungle hunter made quick work of the human group but he was actually after the lion. After dropping his Yautja bio-mask and energy weapons, he released the creature from the net. Seconds later, they were on top of each other and the victor of the fight was left open. 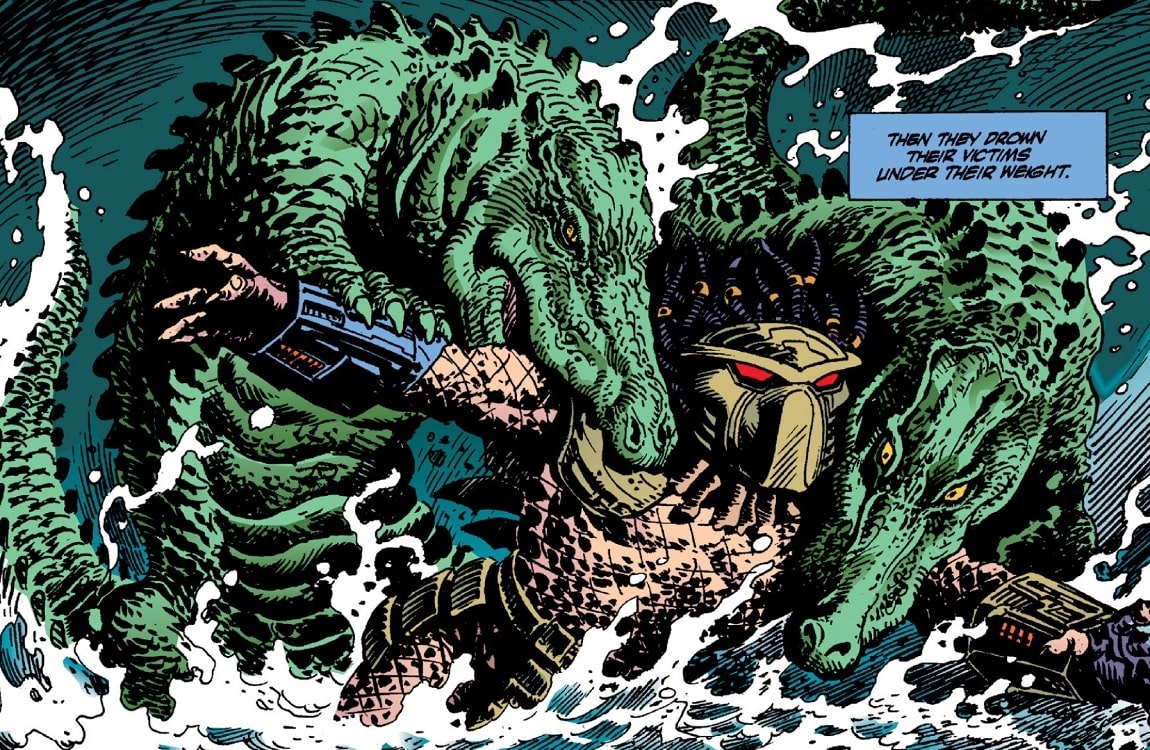 The Predators have had at least a couple of run ins with Crocodiles, but these have been more accidental in nature. The Nghasa Predator was ambushed by two crocodiles while pursuing an English colonist in a swamp in Africa during the 1930ties. The animals dragged the Yautja under the water and the Predator escaped by using his shoulder cannon, but lost his left arm in the process. Another ferocious crocodile nicknamed Pol Pot fought the Yautja from Predator: South China Sea multiple times. While Pol Pot's final fate was unclear, the Predator was gravely wounded in their last stand-off and had to retreat to his ship, where he died later in an explosion. 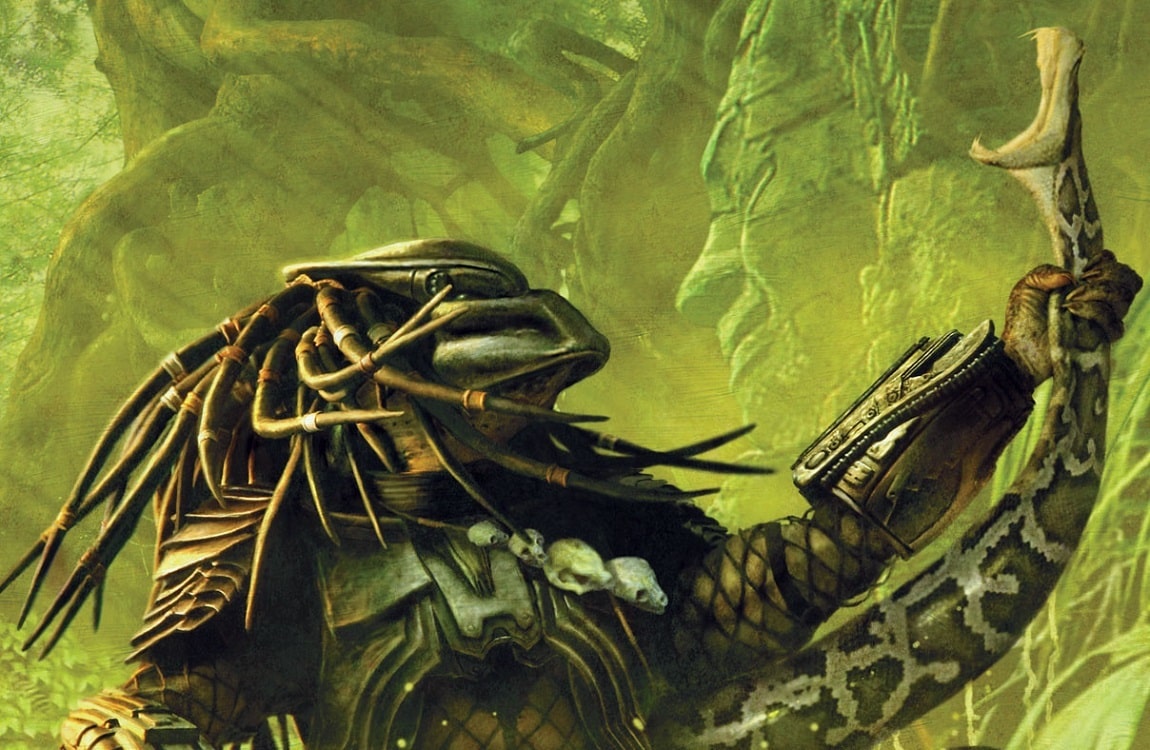 The Predators probably don't enjoy hunting snakes, as they don't present great trophies, unless they are giant snakes. Their encounters with snakes are mostly accidental and they kill them in self-defense. One such brief encounter happened in Predator: South China Sea, which is also depicted on the book's cover. A big anaconda lunged from the swamp on the island and wrapped itself around the Yautja. The Predator grabbed it by the head and killed it with his wristblades. 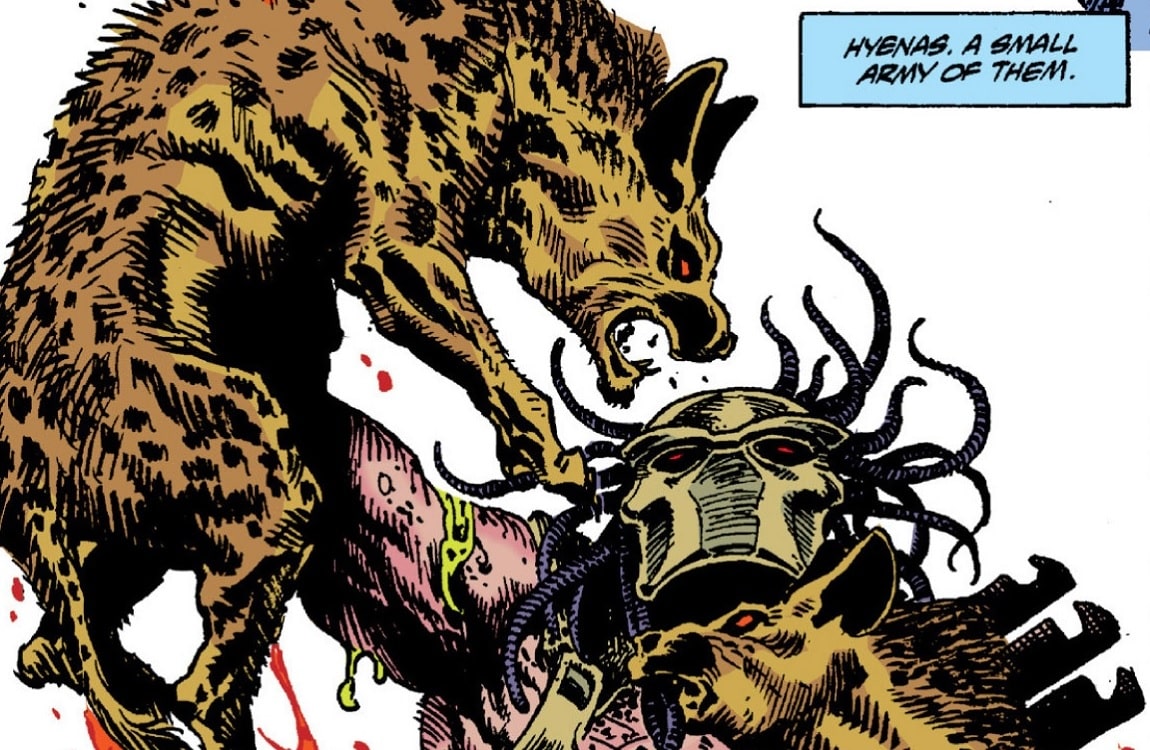 After being attacked by crocodiles in a swamp and losing his left arm, the Nghasa Predator was attacked by a wild pack of hyenas. They are probably considered unworthy prey and not worth hunting, but the Yautja had to defend himself. It is worth noting that the Predator's scent and unearthly blood must have been strange to them, but nether the less they found the wounded prey worth attacking. The Nghasa Devil killed several of the hyenas with the wristblades and shoulder cannons. The noisy fight attracted a nearby lion as well, who leaped on a hyena. The Yautja made a quick exit, and being wounded and fed up with Earth's wildlife, left in his hidden ship. 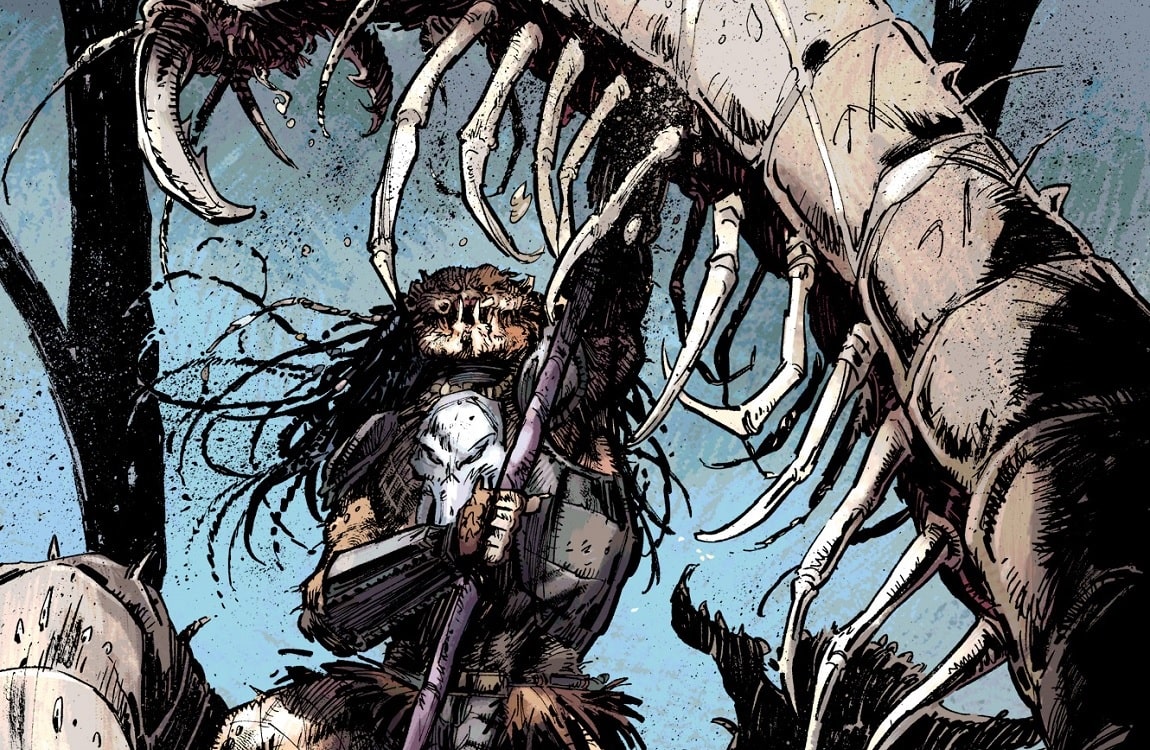 After the Predator nicknamed Ahab reached his lifelong dream of hunting and killing an Engineer, he stayed on the LV-223 to hunt easier game. As the moon was infested by the Black Goo unleashed in the Prometheus movie, local flora and fauna had quickly evolved and produced hideous creatures. Ahab spent about a year on the planetoid hunting such creatures, including a giant centipede. Being an experienced hunter, he had no trouble dispatching it with a makeshift spear, there was no need to use ranged weapons against prey like this. Ahab hunted the Space Jockey and the giant Centipede in the Predator: Fire and Stone series. 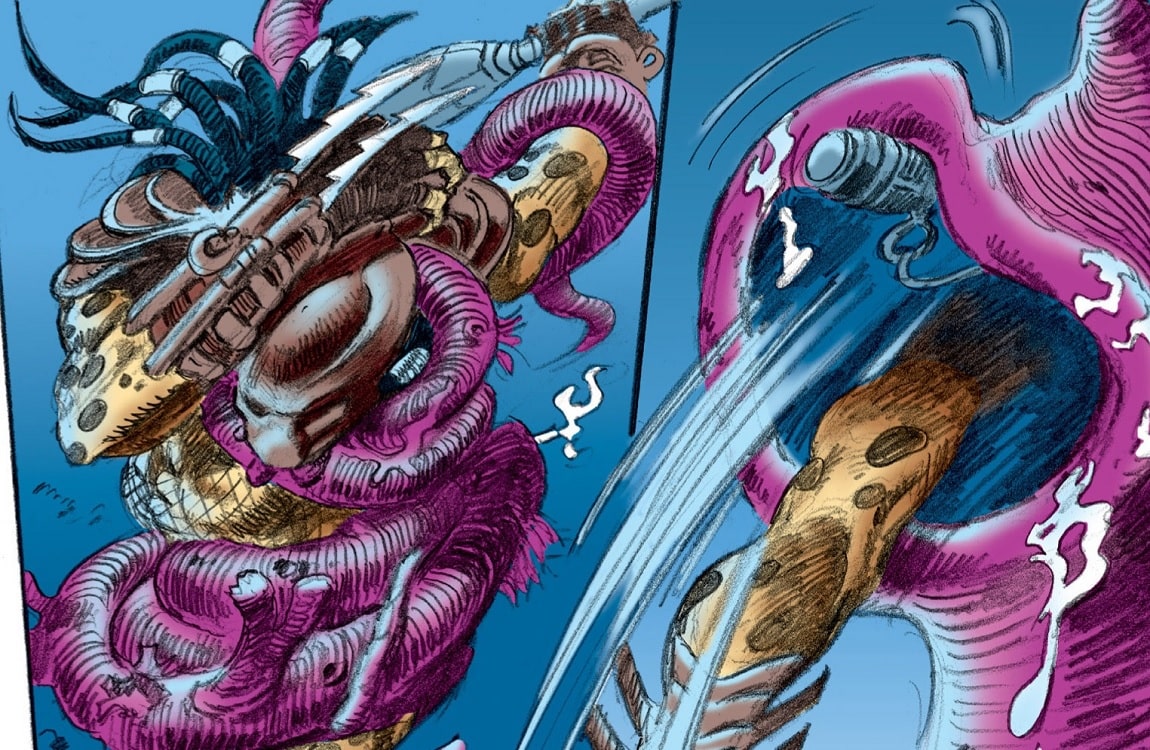 The Predators don't just love hot weather, they enjoy warm water as well, especially if there are exotic creatures involved. In Predator: Hell & Hot Water, a lone Yautja landed in the ocean near the coast of Chile where a volcanic eruption had caused unusually hot water. Turned out the Predators are great divers as well, and don't need much special equipment for the endeavor. The lone Predator hunted a giant squid and was involved in killing most of a special diver team sent to investigate the disturbance. He later fought an unidentified tentacle creature, and after a fierce fight, seemingly died in an underwater cave.