The trophy room is the pride of the Predators. There they display the trophies from their most powerful enemies as reminders of successful hunts. The skulls and spines of all kinds of different creatures have been displayed, including humans, Xenomorphs, other Predators and even dinosaurs. The Predator movie established that the Predators actually collect spines for DNA splicing but perhaps that is not their main objective. Here is a compilation of different Predator trophy rooms and walls from the movies, games and comic books. 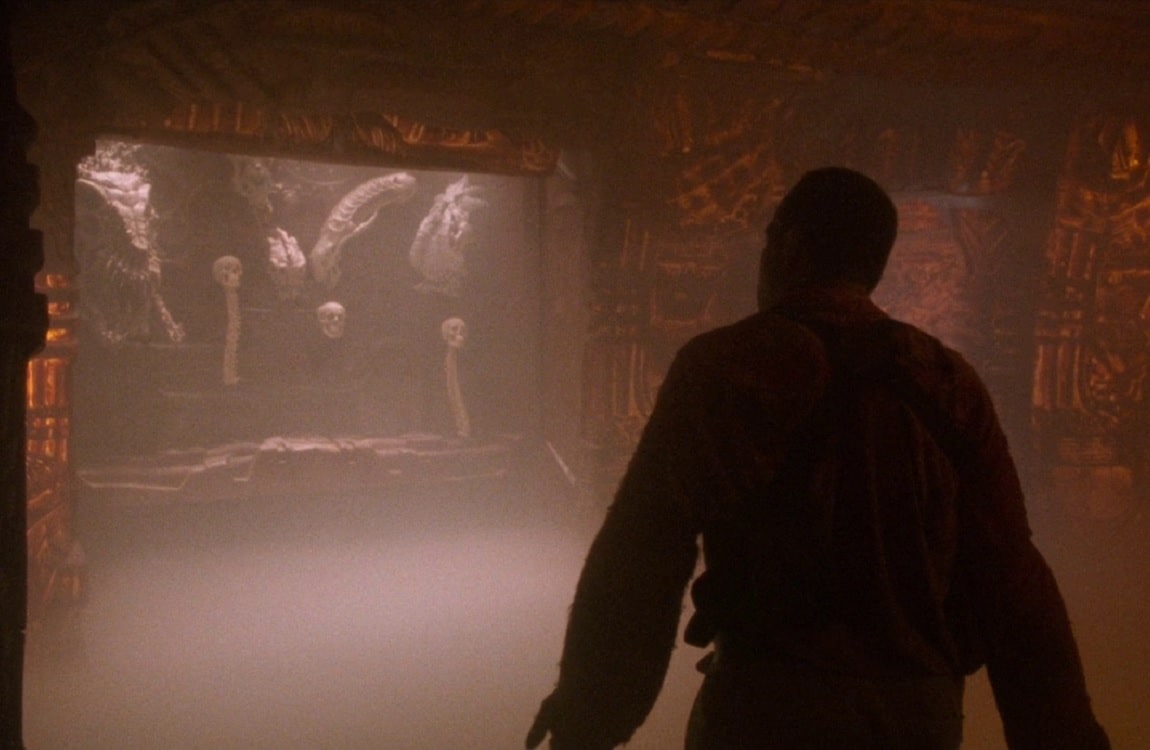 The trophy room from Predator 2 is definitely the most famous display of Predator hunting successes. It was located in the Lost Tribe ship under Los Angeles and was visited by Detective Mike Harrigan while pursuing the City Hunter. Besides the skull of King Willie, the trophy wall contains a mutated version of a T-Rex dinosaur, a Xenomorph head and the skulls of some unknown creatures. The one in the middle resembles a Yautja skull. The big one on the right is possibly a creature from the Aliens vs. Predator 2: Primal Hunt video game. The Lost Tribe trophy wall was the first case in movies where we saw evidence of the Predators fighting Aliens. 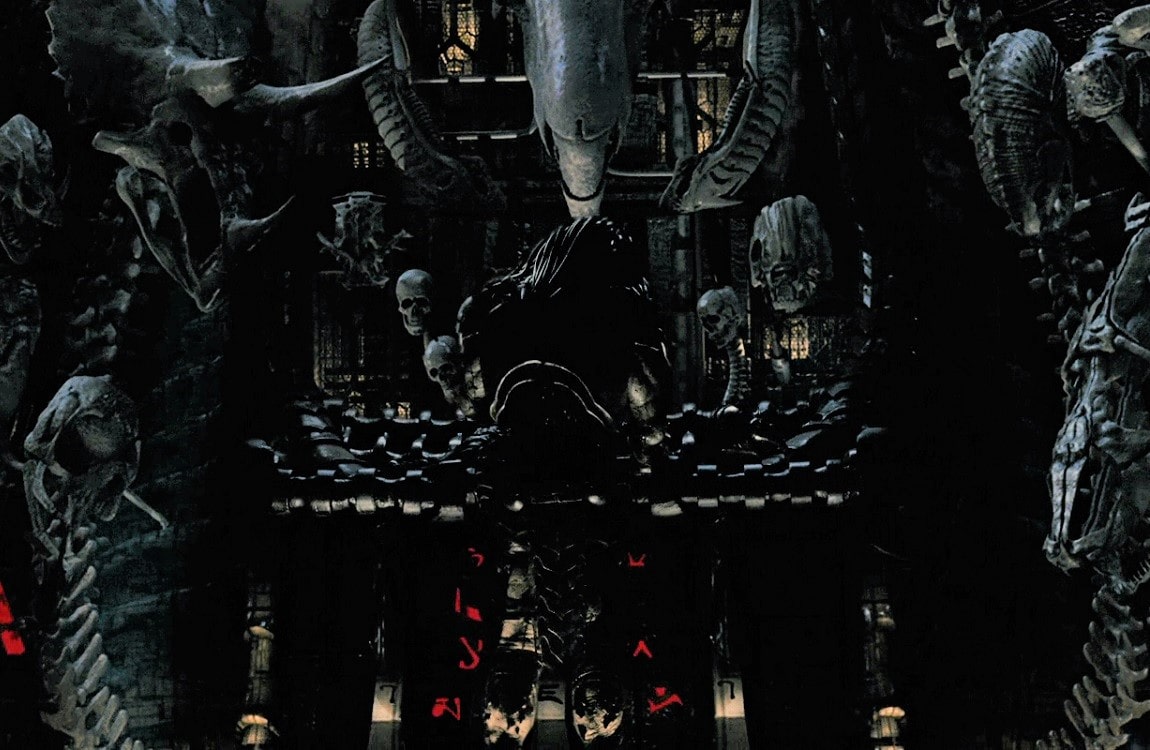 The trophy room from the beginning of Aliens vs. Predator: Requiem is probably the most impressive one from all of the Predator media. Too bad we see it so briefly and in very dark light, like the rest of the movie. It was located on the Predator scout ship that separates from the mother ship. It was not only a trophy wall but also a workbench from the Predators who cleaned the skulls of fallen enemies on the table. The impressive lineup of skulls even contains a Space Jockey head. The trophy room was destroyed together with the ship on Earth by Wolf during his cleanup mission. 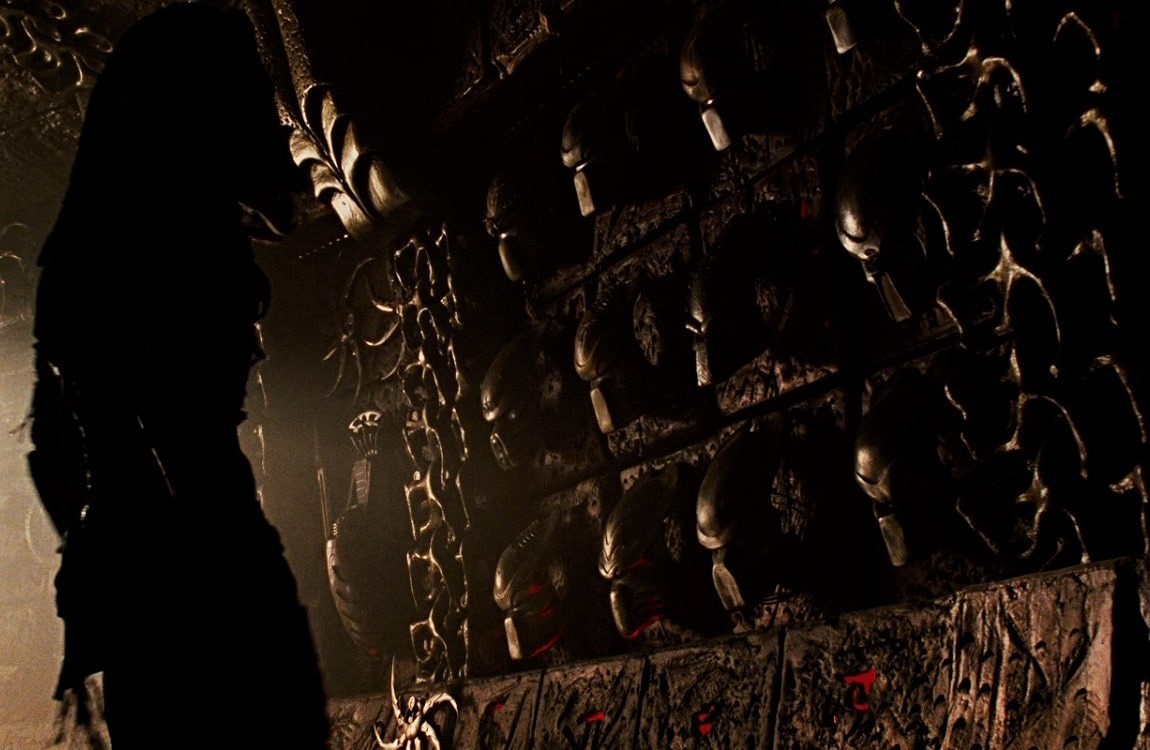 Wolf did not necessarily have a trophy room, but more like a war room in his penthouse-like apartment on Yautja Prime. However, it is possible that the masks and weapons displayed in the room are mementos from conquered enemies, including other bad-blood Predators. Wolf also used a tail manufactured from the tail of a Xenomorph, possibly also a trophy itself. On Earth, he was not so much interested in taking trophies, but cleaning up the mess of the other Predators. He did skin the poor deputy sheriff for no apparent reason though.

The Game Preserve Outcasts from Predators discovered the whole messy camp of the Super Predators, including trophy skulls, flayed skins, skinned bodies, and the captured Jungle Hunter Predator, tied to a totem. It even contained discarded Yautja skulls, thrown into the mud. Nothing was well arranged like with many of the other Predator trophy collections, revealing the reckless nature of the Super Yautja. Perhaps the camp was meant to be found as a way of intimidating their prey. 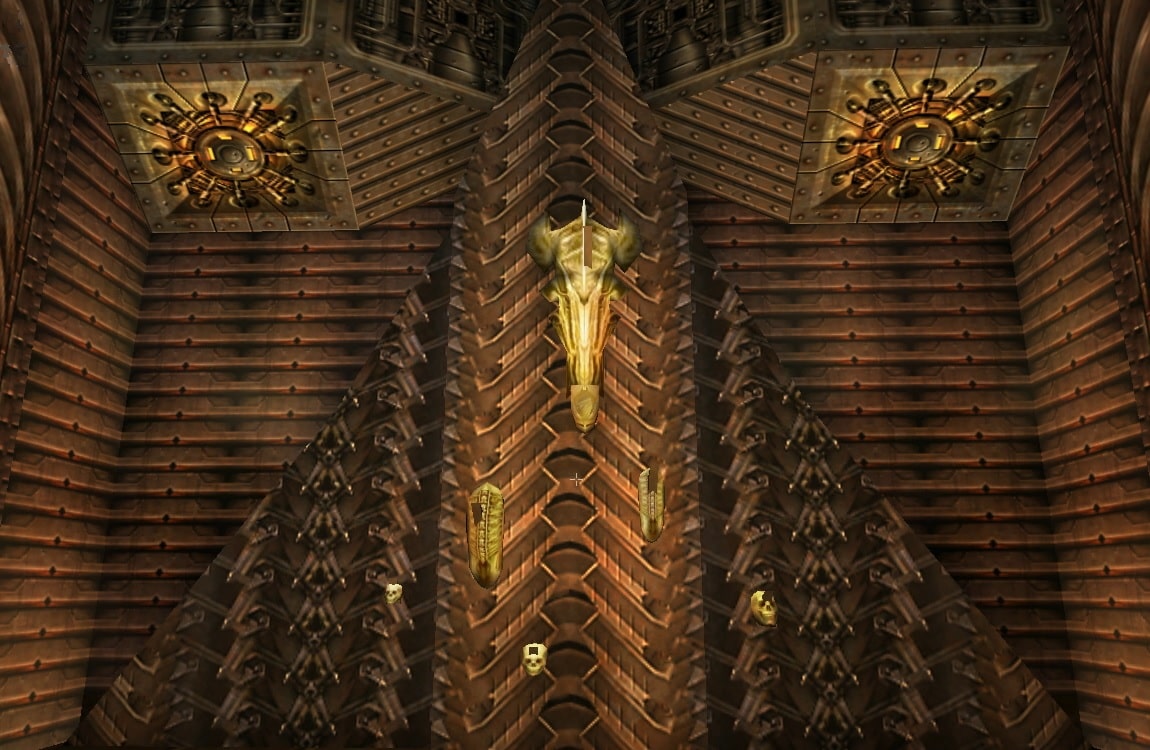 The Zeta site trophy room on LV-1201 was located in the ruins of an ancient Engineer structure in the Aliens vs. Predator 2: Primal Hunt video game. The ancient Predator discovered the structure in the 18th century and the Yautja built their own facility on top of the Engineer ruins. The facility contained the impressive looking trophy room. On display were 3 human skulls, 2 Xenomorph skulls and the head of the Alien Queen. Although there weren't many trophies, the wall looked great with the golden skulls and background. 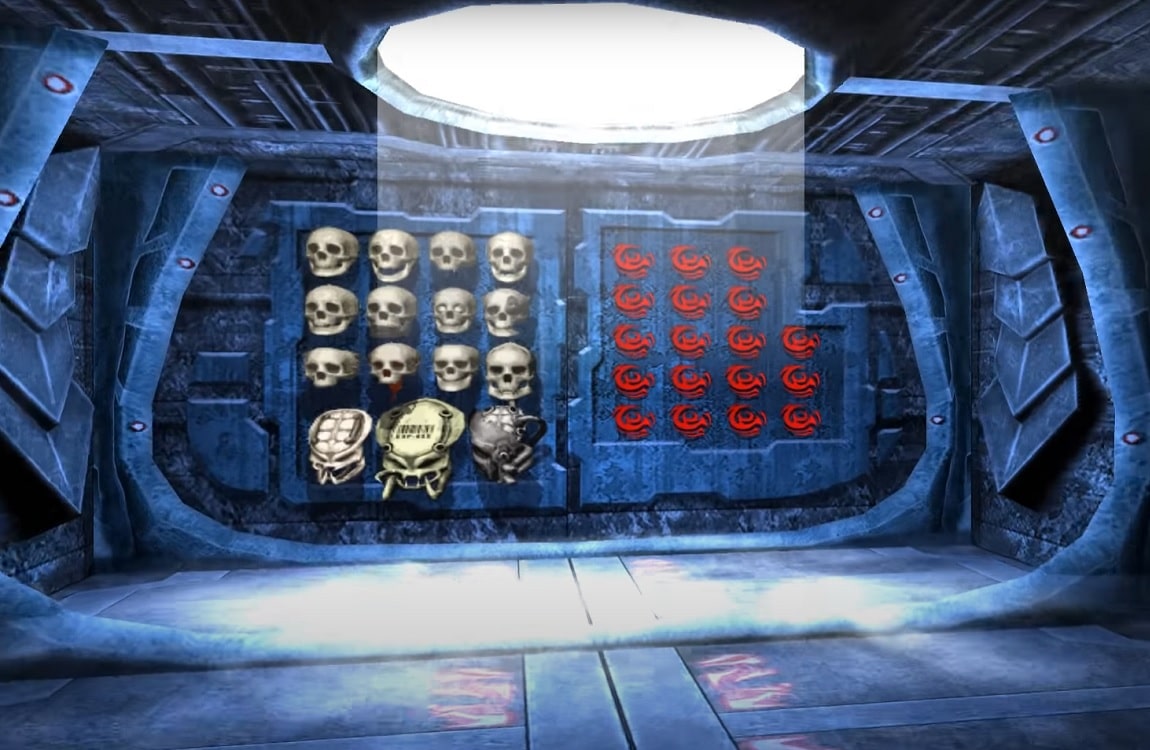 Scarface the Predator from the Predator: Concrete Jungle video game had a simple looking trophy room in his ship. He only displayed human and Yautja skulls, although he also hunted Xenomorphs at one point. The biggest Predator skull in his collection belonged to Stone Heart, a cybernetically enhanced Predator. The trophy wall also contained 12 skulls of different crime bosses from the Neonopolis city where Scarface hunted. On the right side of the trophy case were displayed personal achievements that were obtainable in the game.

The Mortal Kombat XL video game includes the Alien and Predator as playable characters. After defeating an opponent and ripping their head off, the Predator placed their skull inside a sleek looking trophy room, presumably on-board his spaceship. The trophy room contained several exotic trophies, like the head of a mutated T-Rex (similar to the one in Predator 2), the skull of a Tyranid from Warhammer 40 000 and a skull from the Diablo video game series. 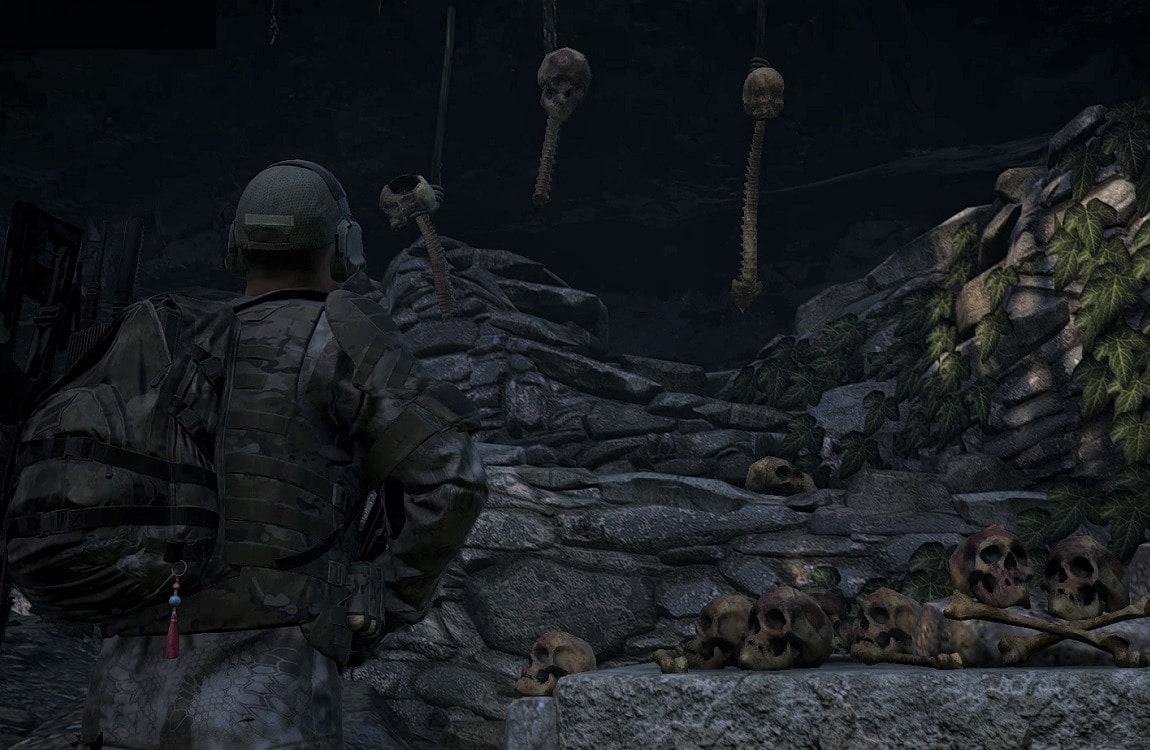 The Tom Clancy universe got a visit by a Predator in the Ghost Recon Wildlands video game. The locals in Bolivia complained about the jungle moving and people disappearing. A squad of Ghost Recon soldiers investigated the scene and found a Yautja ship, skinned bodies and a Predator trophy wall in the jungle. The wall was filled with the skulls and spines of slaughtered narcos and possibly rebels who fought against them. The Predator was mortally wounded by the Ghost Recon squad and chose to blow himself up. 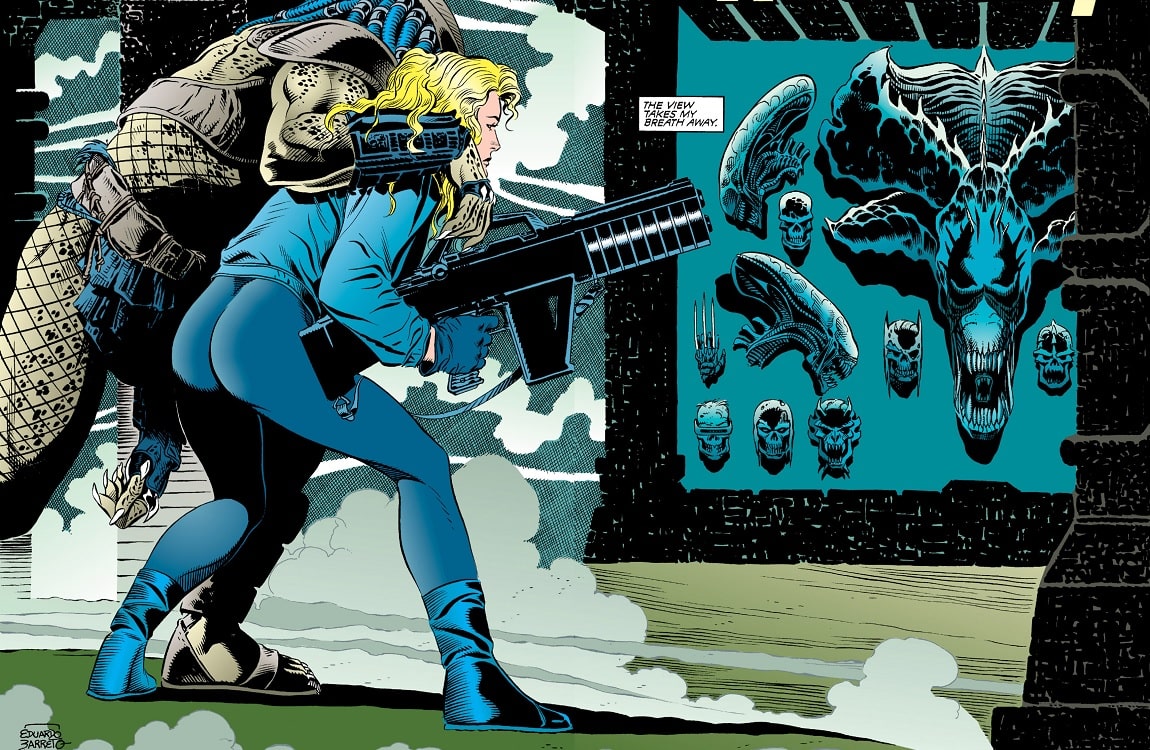 The Predator nicknamed Big Mama had a very exotic trophy wall on-board her ship. In addition to an Alien Queen and 2 Xenomorph warrior skulls, it contained the body parts of several iconic superheroes from the DC and Marvel universes. The skulls of Batman, Cyclops and Magneto and the clawed hand of Wolverine were displayed. Big Mama must have visited some parallel universes during her hunts. However, it is not so far-fetched as it seems. Batman is known to fight the Predator in the excellent Batman vs. Predator comic series. A fan film called Wolverine vs. Predator was released in 2013 in part of the Super Power Beat Down web series. Unfortunately, the Predator lost in both crossover events so it's nice to see Big Mama's reversal of that. 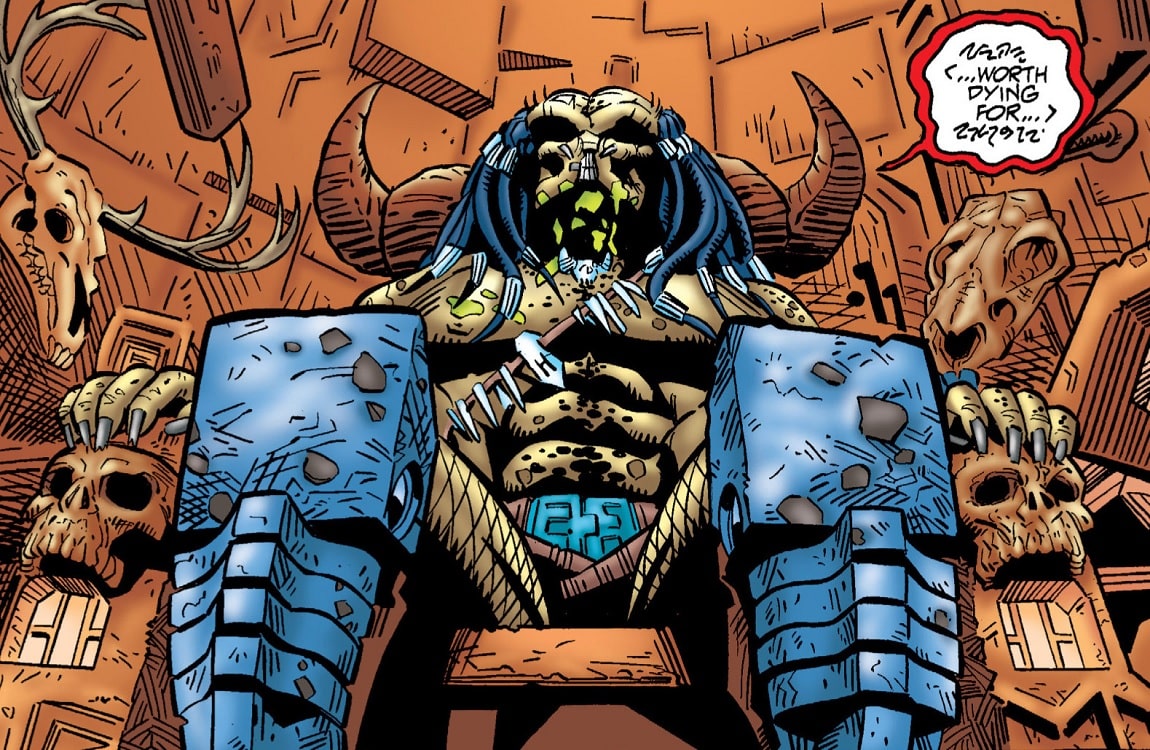 In Predator: Primal, a nature-loving Yautja visited the Denali National Park in Alaska with his spaceship. The Predator loved hunting deer and grizzly bears and this was also reflected in his trophy room on-board the ship. This is the only known Predator trophy room to display antlers, quite similar to many human trophy rooms on Earth. The room also contained a throne-like chair decorated with human skulls. The Primal Predator fought a grizzly bear one last time and lost the fight. Being severely wounded and feeling dishonored, he blew himself up in the spaceship along with his many trophies. 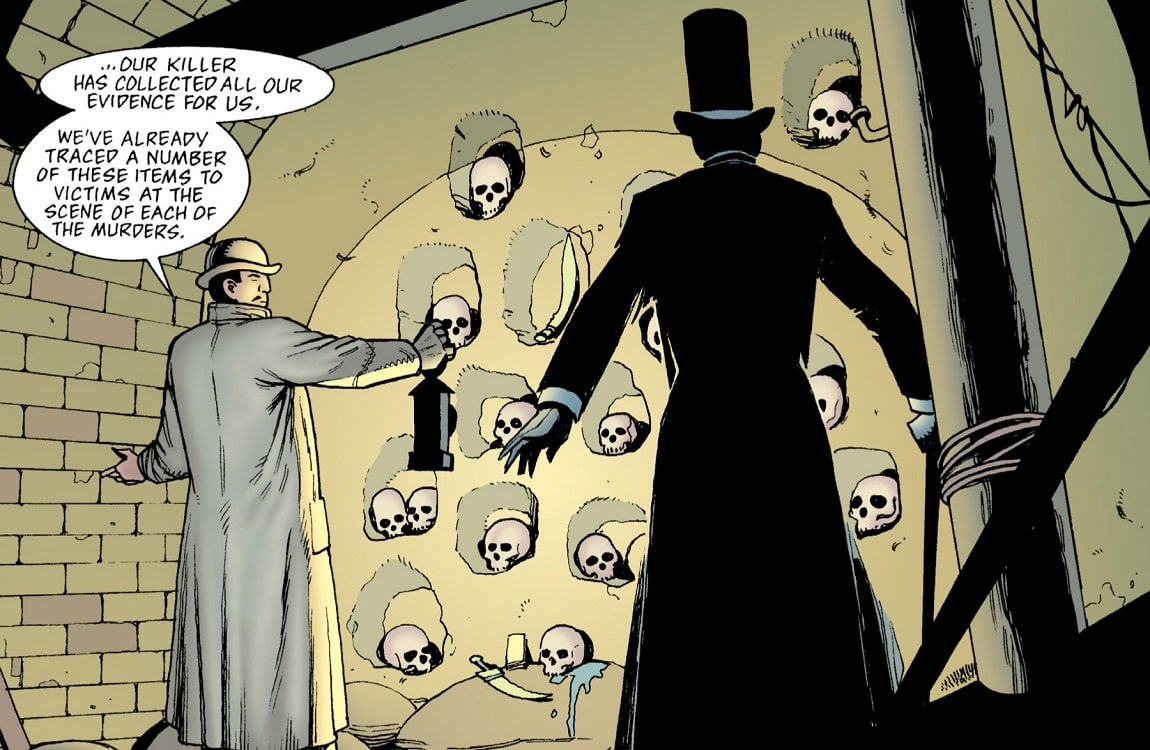 Springheeled Jack was a nickname given to the Predator who terrorized London at the end of the Victorian Age. His exploits were similar to Jack The Ripper, and their identities were sometimes mixed up. Springheeled Jack's trophy room was located in the sewers of London and contained about a dozen human skulls. His ship was hidden in a nearby tunnel but he chose to display his trophies outside of it, unlike several other Predators. There were also a few weapons from his fallen enemies, like a scimitar. The Predator was defeated by Captain Soames in the same sewers. Springheeled Jack and his trophy wall appeared in the Predator: Nemesis comic book.

The Trophy Room in Afghanistan 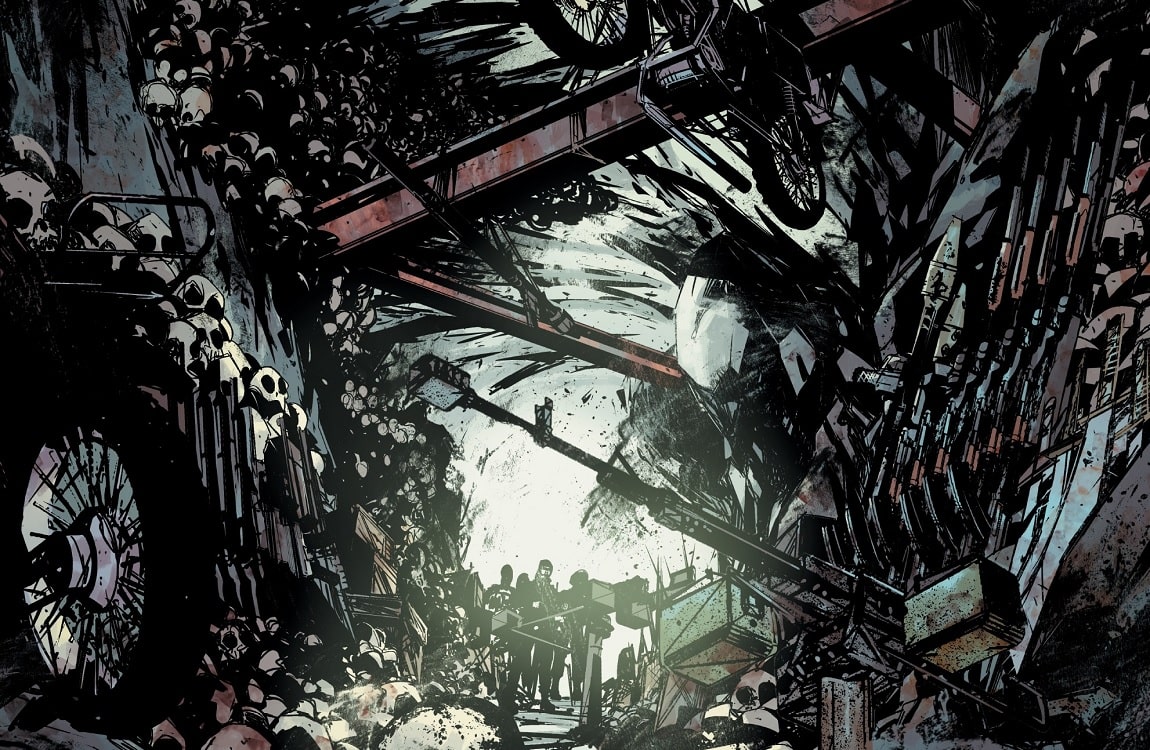 While most Predators enjoyed collecting spines and skulls, the Afghanistan Predator from Predator: Hunters II loved hoarding human weapons in addition to skulls. His collection consisted of AK47-s, bazookas and even motorbikes. As Afghanistan has always been a hot zone, it contained the much-needed conflict and collectibles for the Predator. The Predator stored his mementos in a hidden cave in the mountains which was discovered and looted by humans later. 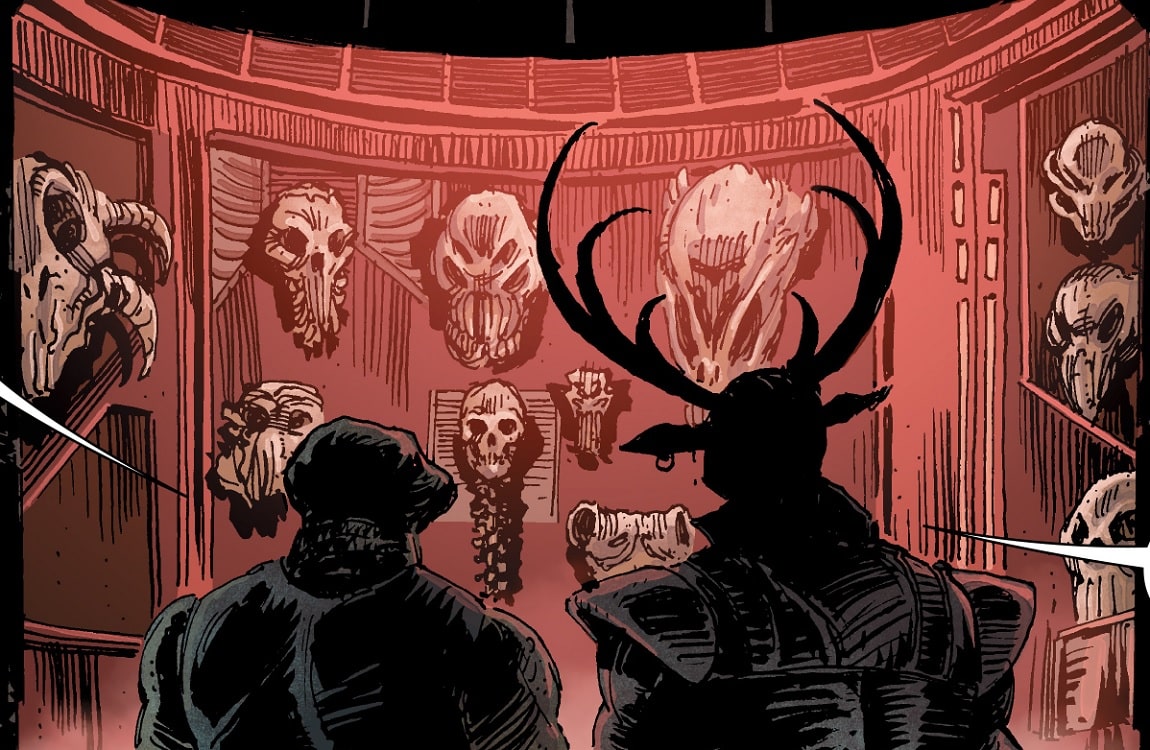 The Cursed Earth Predator (from Predator vs. Judge Dredd vs. Aliens - Splice And Dice) crash-landed on Earth and was hunted down by the mutant hybrids of Dr. Niels Reinstöt, including a stag man with antlers. His ship also fell into enemy hands, revealing both an impressive weapons room, and a trophy collection. It contained many exotic trophies, including a pale Xenomorph skull, similar to the one seen at the end of Predator 2. The skull went into use soon after, as Dr. Reinstöt reverse-engineered the Xenomorph DNA from it, producing an egg and a facehugger. The facehugger then latched on to the Cursed Earth Predator, producing a Predalien, who would soon fight Judge Dredd. 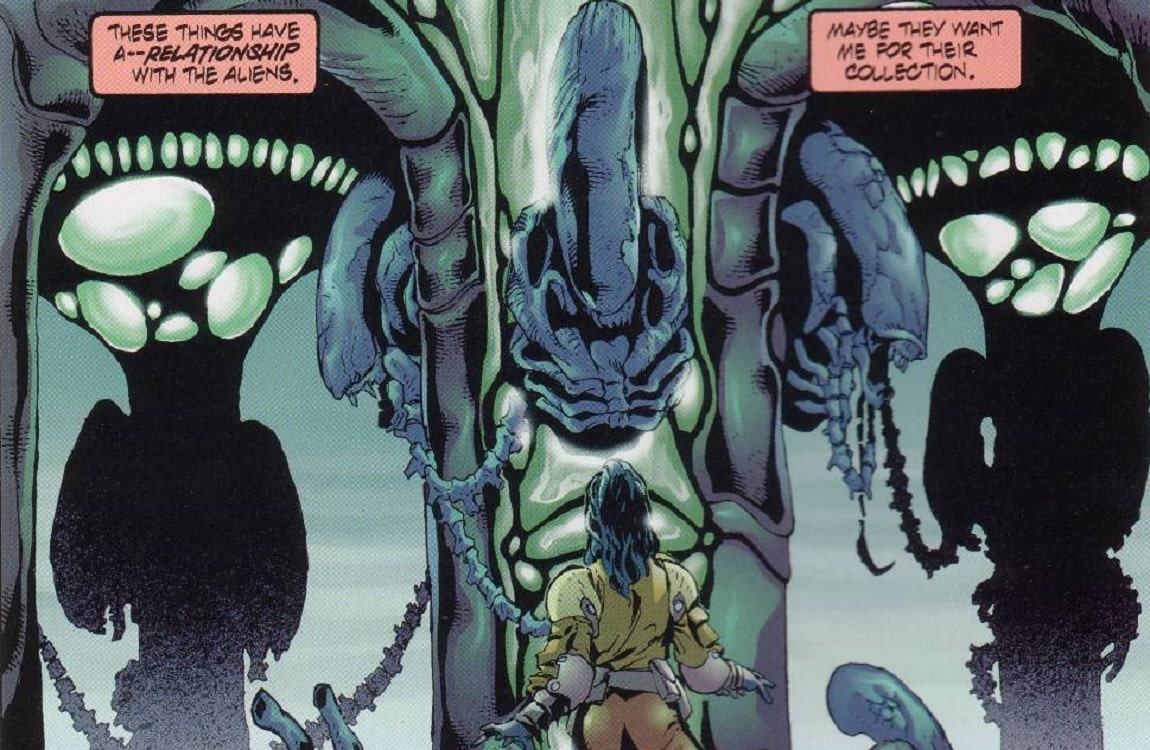 A unique and purely Xenomorph-oriented trophy collection showed up in the Aliens versus Predator versus The Terminator comic series. It was located on a Predator mothership and contained multiple pillars with Xenomorph heads with ribcages still attached. On the foot of the pillars were dozens of Xenomorph corpses. This trophy case was discovered by none other than Ripley 8, a somewhat surprising protagonist in this weird crossover series. The Predators made an uneasy alliance with her and allowed Ripley to roam around their ship, still wondering if they would take a trophy from her. 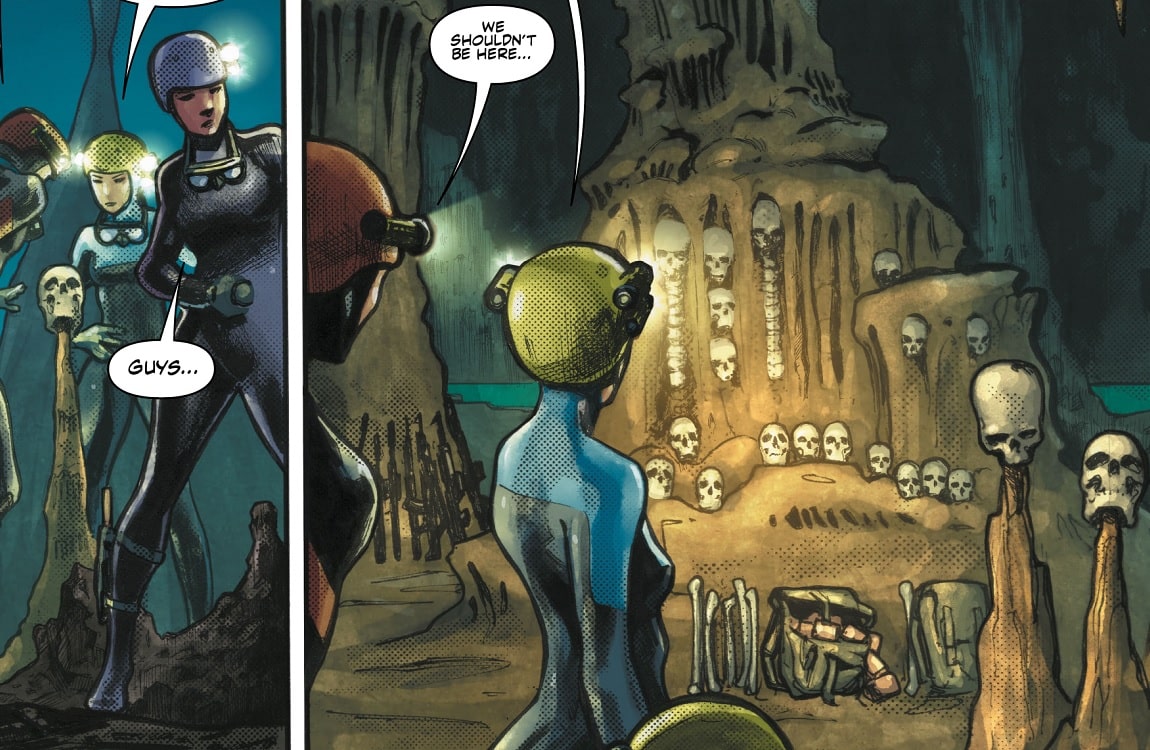 The two Predators from Predator: Hunters III hunted in the jungles of Belize and hid their trophies in an underwater cave near an ancient temple. Their prey mostly consisted of drug cartel members who were operating in the area, so in addition to skulls, the trophies included AK rifles and packs of heroin. The cave was discovered by a trio of scuba divers, who quickly realized their mistake of venturing into the wrong place. The two Predators killed the divers, but argued about the nature of the kills because the humans were unarmed at first and two of them had been women. The trophy wall was probably left in place, as the Predators left in their Mothership later.

Want to know more about the Yautja? Check out the list of the most Biggest Predators and look over the best looking Predator Bio-Masks.