The Lost Tribe Predators were a clan of Yautja hidden in a spaceship under the sewers of Los Angeles, as seen by Mike Harrigan at the end of Predator 2. However, they got their name from the fact that the suits were stolen soon after the filming was wrapped on Predator 2. Most of these Predators were played by the LA Lakers and exactly half of them wore bio-masks in the final scene. Here is an overview of the Lost Tribe Predators, including available backgrounds from the Predator books, comics, and NECA figure bios. 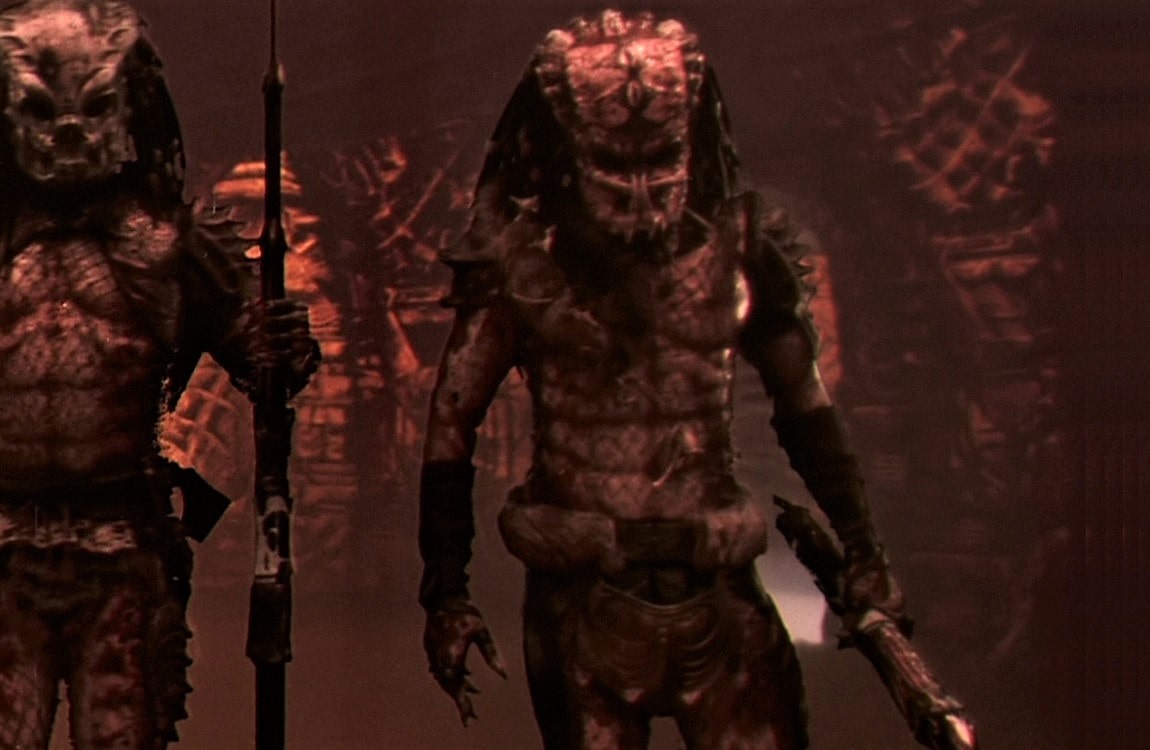 Snake is one of the most mysterious of the Lost Tribe Predators and got his nickname from the snake-like skin on his unmasked face and arm. Snake wore a combistick and stood next to the Guardian Predator. Like the Warrior Predator, he wore a hanging ornamental groin protection. NECA is yet to release an ultimate figure of Snake and his background is unknown, having not appeared in any books or comics either. 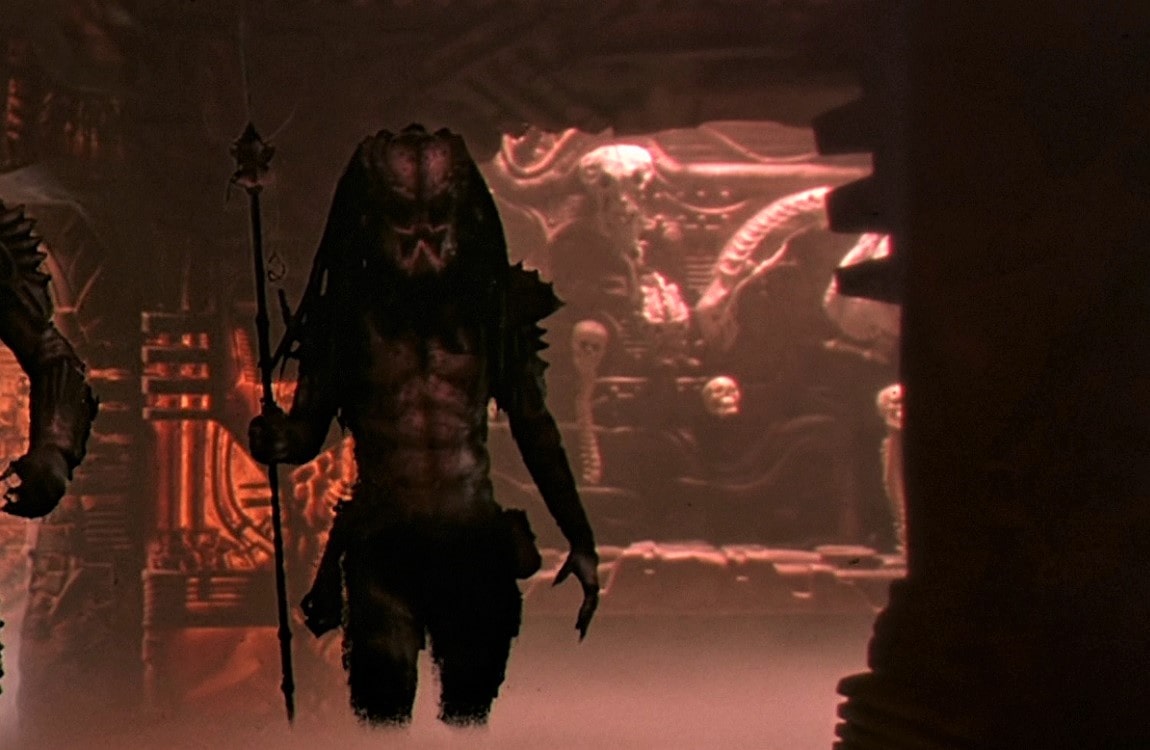 Like Snake, Shaman has no Expanded Universe background and his origins can only be speculated on. He is possibly a spiritual leader of the clan, wearing a shaman staff that can also be used as a weapon. Shaman is also sometimes called Hippie, possibly because of his very long dreadlocks and skinny body. He stood beside the Warrior Predator and was the closest to the Trophy Wall, perhaps just coming from inspecting it. 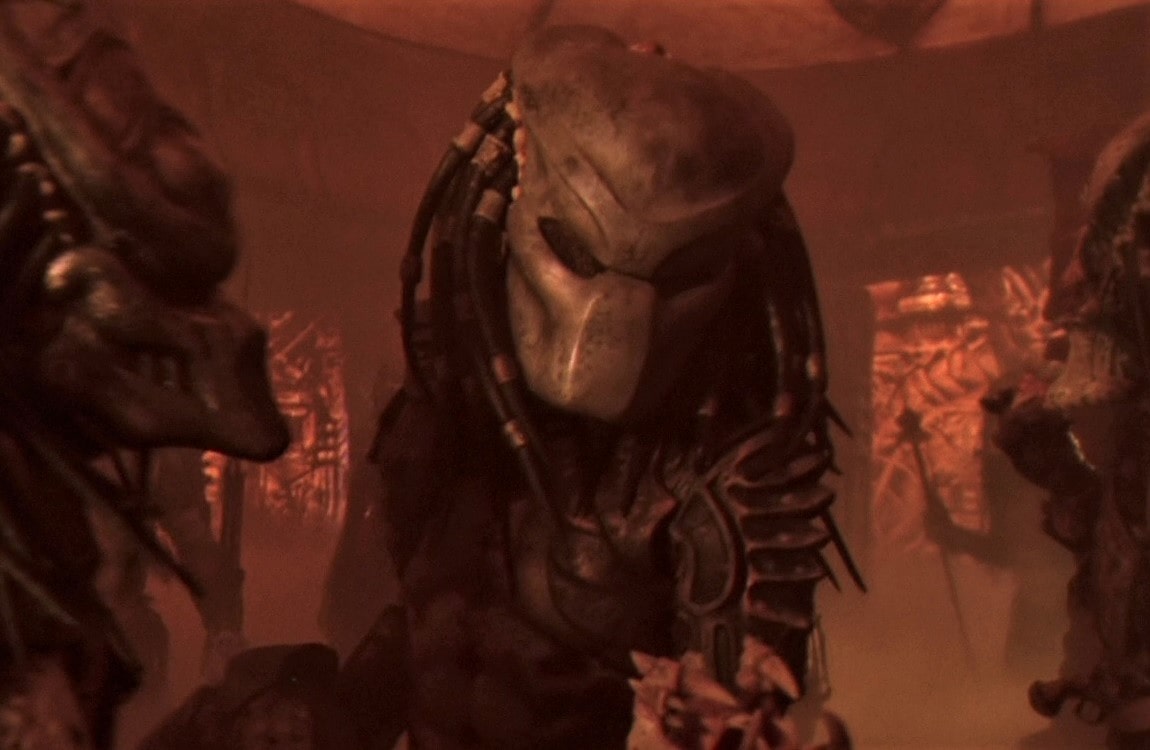 Scout wore the exact same mask and armor as the Jungle Hunter from the first movie. He stood next to Boar Predator and helped carry City Hunter's body away from the scene. According to the NECA figure background, Scout was an expert sniper, specializing in plasma rifles. Growing up on an isolated island on Yautja Prime, he descended from a rare sub-species of Yautja. In the Lost Tribe, he was tasked with taking out secondary targets from a distance and possibly venturing into Los Angeles secretly as well. Scout's unmasked face was pale with a ridged forehead and huge tusks hinting at his alternate sub-species, and also causing some controversy. 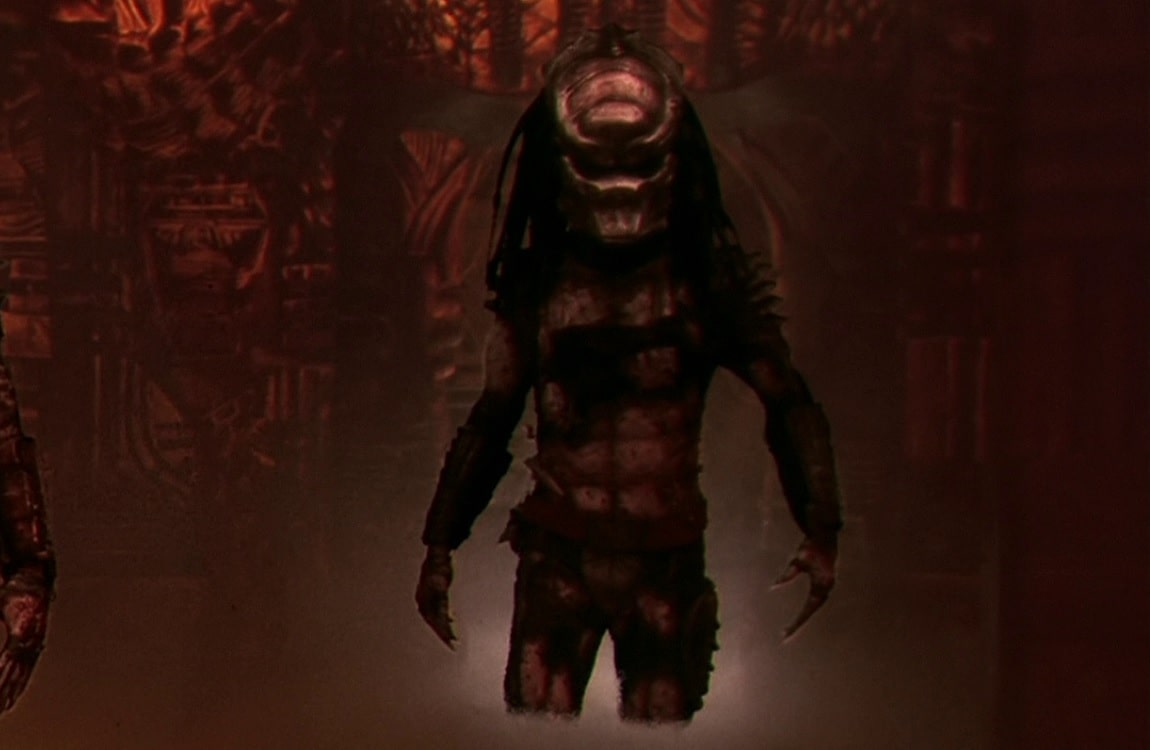 Boar Predator was the older of the two Boar brothers of the Lost Predators, the Yautja who wore very similar masks. Apparently, the two brothers had been young thieves who were caught by Greyback and taken into the clan for their first hunt in Los Angeles. However, they would reach glory after the events of the movie. The duo combined their strengths into an effective team, taking on jobs protection, extraction, and exotic trophy hunting. While Stalker (the younger brother) did most of the thinking, Boar was the aggressive and brave type. 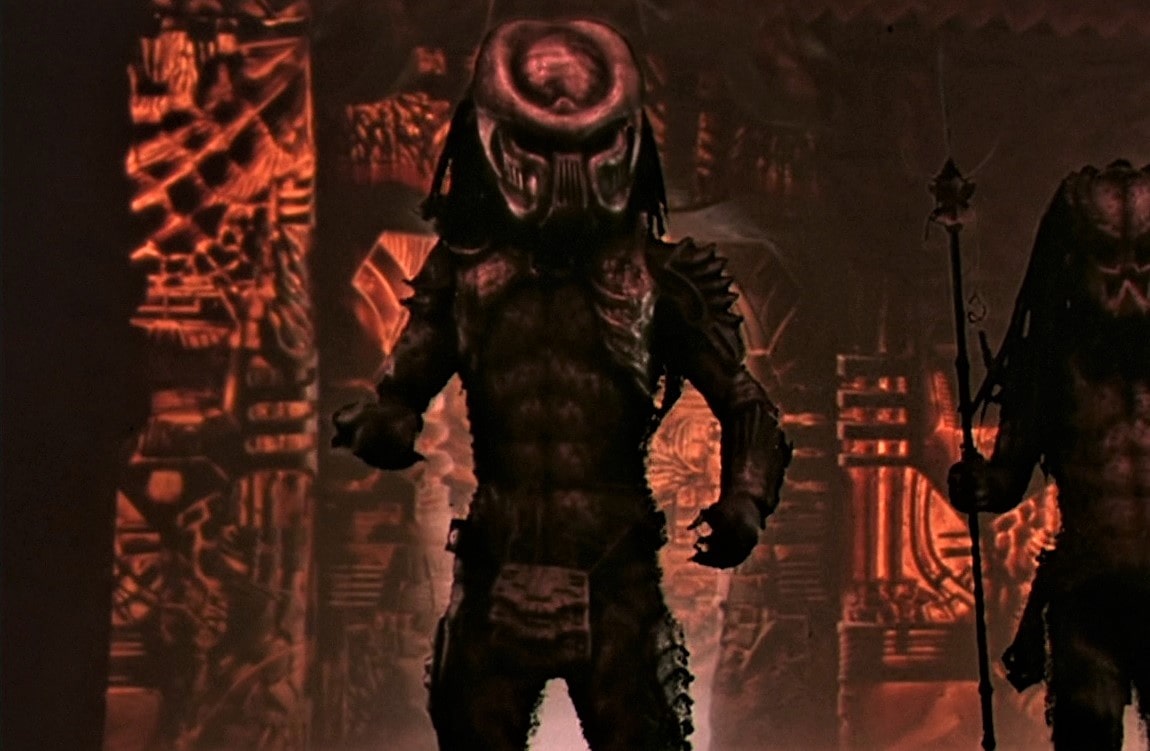 Warrior wore one of the best-looking masks of the Lost Predators and was also called Ram. He had a blueish skin tone and wore no weapons, standing next to Shaman and emerging from a tunnel next to the trophy case. According to the NECA bio, he was an Elite Yautja who was forged in the fire of the "Blood Ring", a combative fighting sport. The ring allowed no ranged weapons, so Warrior became an expert in melee, wielding a giant axe. He was one of the eldest members of the Lost Predator and trusted right had to Greyback. Warrior was also the weapons master of the clan. 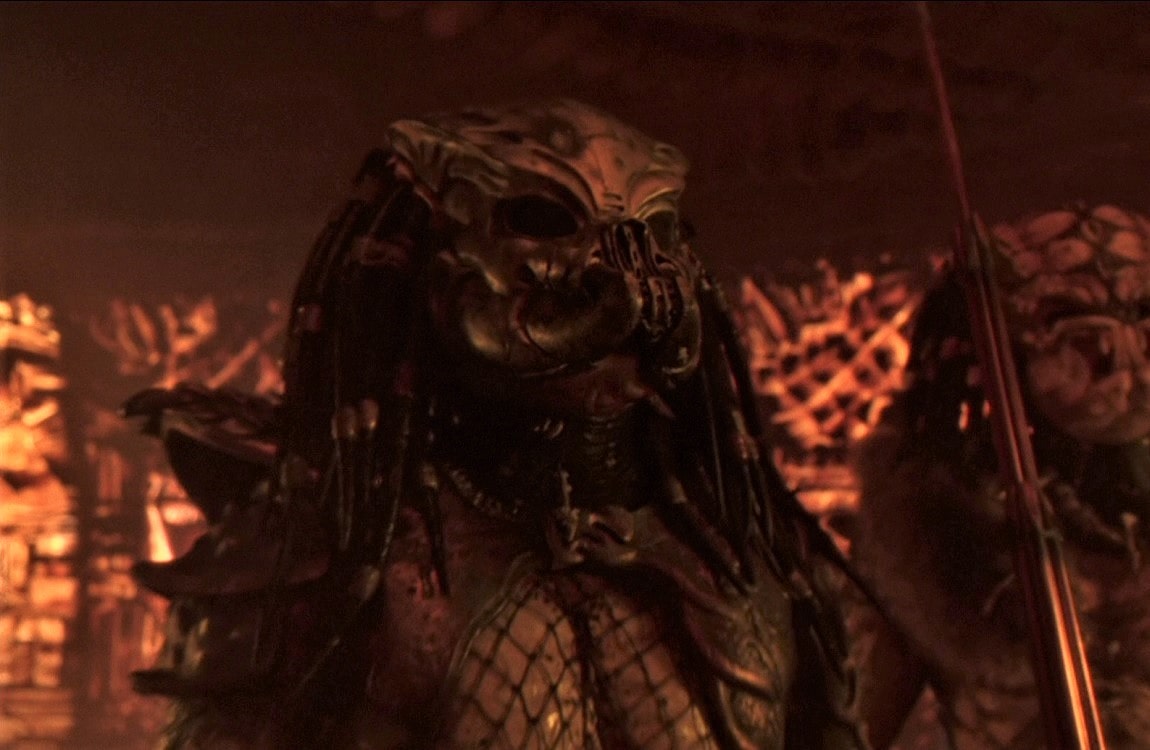 Guardian Predator (also known as Gort) wore the original mask of the Jungle Hunter from the first movie, before it was replaced for a more elegant one. According to the NECA bio, he was the only Predator in the Lost Tribe who had served as a temple guard, an occupation for a Predator seen in the first AvP movie. His skills were more focused on being a soldier than a hunter. Guardian was the explosives and big gun expert of the clan, being trusted on taking down heavy opponents. However, this didn't fit well with trophy hunting, as no trophy would be left in a big explosion. Feeling a bit disgruntled, he also hunted alone and took on difficult opponents including the Xenomorphs, becoming an Elite in the process. 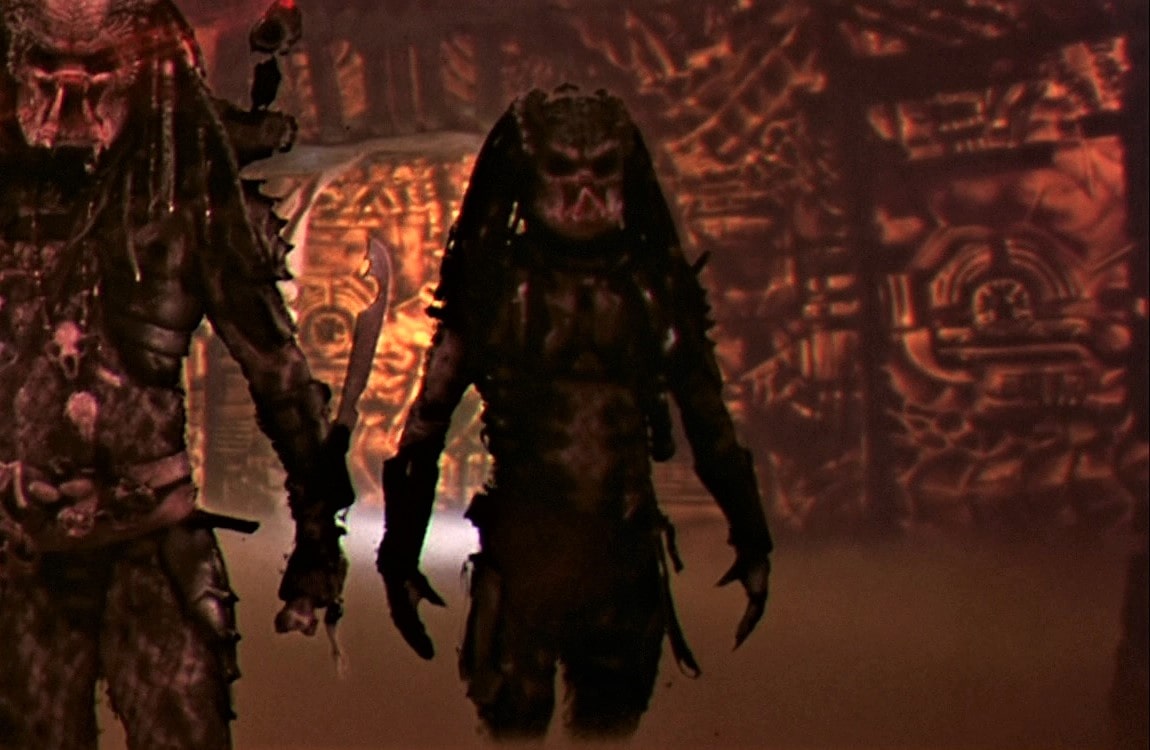 In addition to the Elder Predator, Borg (also known as Armored Lost) has one of the most interesting backgrounds of the tribe. He was a master of weapons who joined the Lost Tribe at an early stage of his career. Soon after, Borg was involved with the Spiked Tail and Lasershot Predators in a heist to steal experimental Predator technology from Yautja Prime. They barely escaped the planet and were disowned by the Elder Council, becoming fugitives. With their new highly advanced ship and weapons, they explored the galaxy and took on mercenary jobs from alien races, even hunting artificial intelligence. The NECA background even hinted at Borg being able to time travel with his ship, going a bit too far into Star Trek territory where his name originates from. 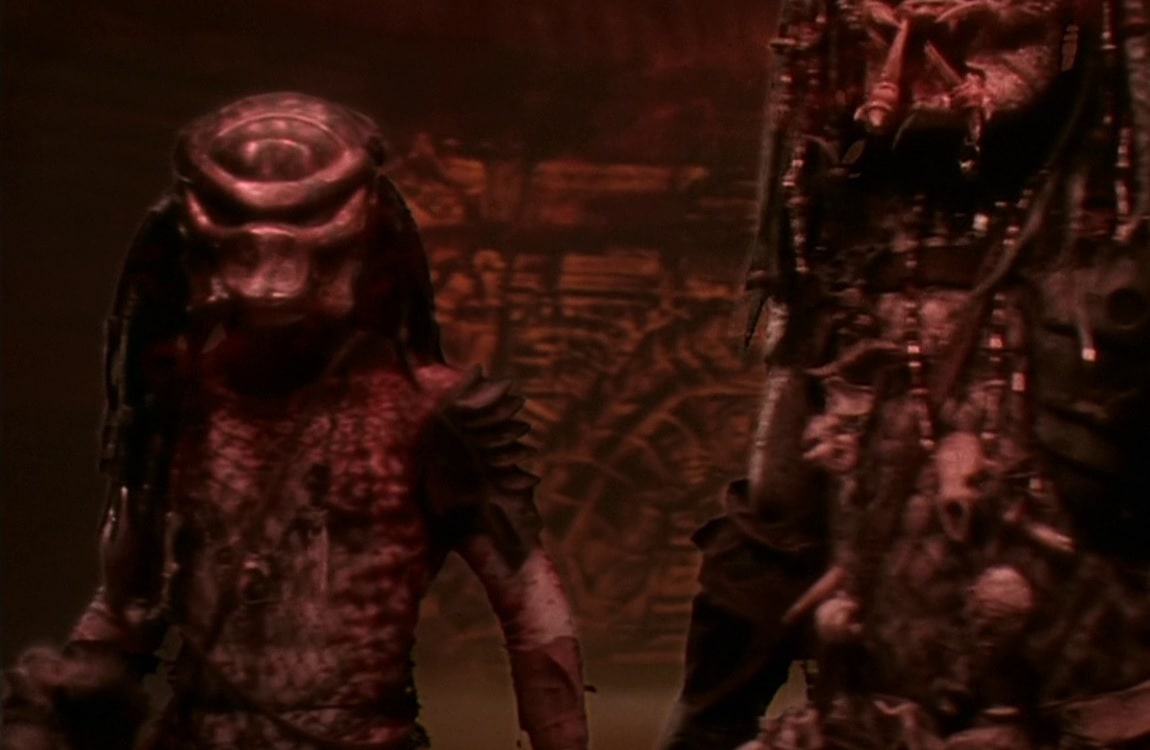 The Stalker Predator (also known as Brother Boar) cannot be underestimated by his small size and young age. As seen on the NECA ultimate figure package, he is one of two known Predators who have hunted and killed an Engineer, the other being Ahab from the Fire and Stone series. Being more intelligent than his older brother Boar, he took the initiative in engaging in more exotic and dangerous hunts, finally leading to the killing of an Engineer. In the end, they were an intergalactic mercenary duo known throughout the underworld, possibly leaving the Lost Tribe behind. 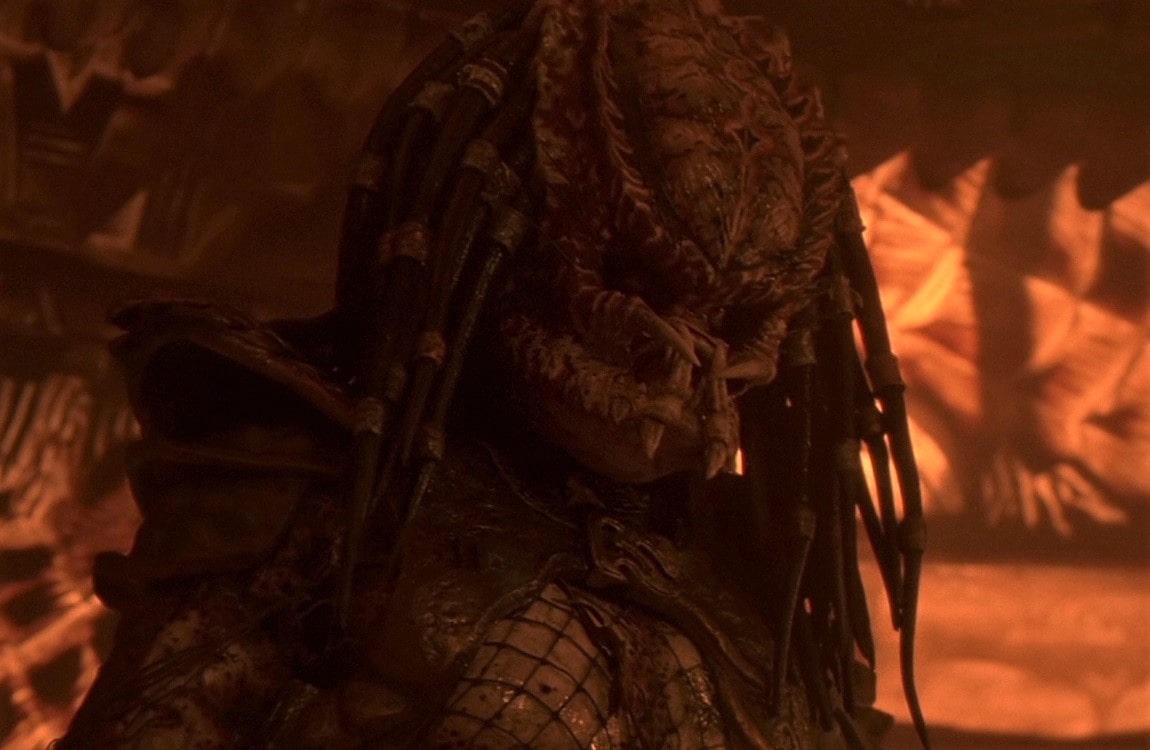 The City Hunter is the most famous Lost Tribe Predator, but he is actually a relatively young hunter, possibly even being a Young Blood on his first serious hunt. According to the Predator 2 novelization, the City Hunter studied the recordings being transmitted from the Jungle Hunter's bio-mask in Val Verde and became interested in hunting humans. The young Yautja did a good job taking down gang members, police, and even a whole team of OWLF commandos. However, he was reckless during his rampage in Los Angeles, leaving too much of his technology behind, which led to his downfall as it was used against him. The City Hunter also underestimated Mike Harrigan, who finally killed him in his ship, in full view of his tribe members. His body was taken home with full honors, which was either Yautja Prime or some other Predator planet. 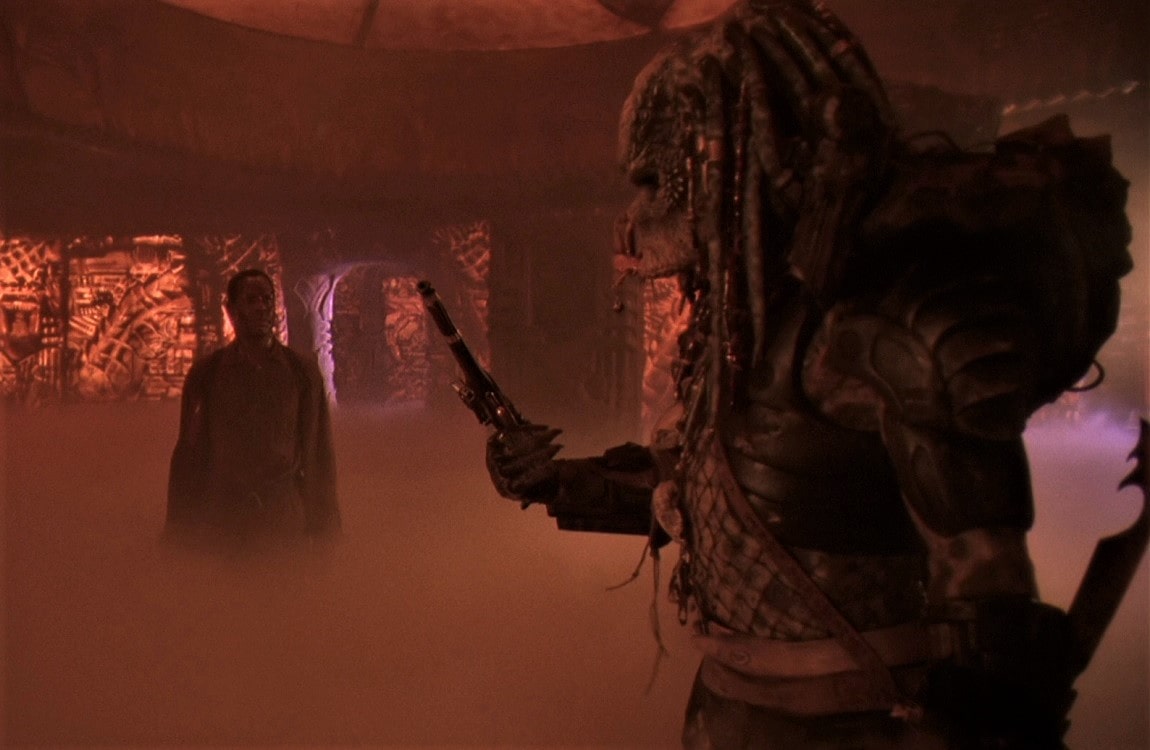 Greyback the Elder was the leader of the Lost Tribe and one of the most established Predators ever. He was already hunting on Earth in the early 18th century, teaming up with captain Raphael Adolini against a mutinous crew of pirates. When Adolini was killed, Greyback acquired the flintlock pistol with the famous engraving "Raphael Adolini 1715". Later, Greyback formed the Lost Tribe, taking both young troublemakers and established warriors from Yautja Prime for his new 10 member crew. During the events of the Rage War in the late 27th century, a thousand-year-old Predator King with name of Kalakta joined up with humans to fight against the Xenomorphs controlled by the Rage. The book hints that Kalakta could actually be Greyback, who became the leader of the entire Predator race.

Did you enjoy the article and want to read more fun lists about the Predators? Check out the list of Hybrid Predators and the Super Predators.