Wolverine and Predator are both feral creatures who have a strong connection to nature and the jungle. In addition, they both mount razor-sharp claws that extend from their arms which are used to engage opponents in close-quarters combat. While Wolverine has mutant healing powers, the Predator makes up for it with more advanced weaponry and extraordinary strength and resilience. The two combatants are a good match for each other and it is no wonder that some crossover encounters between them have already occurred. 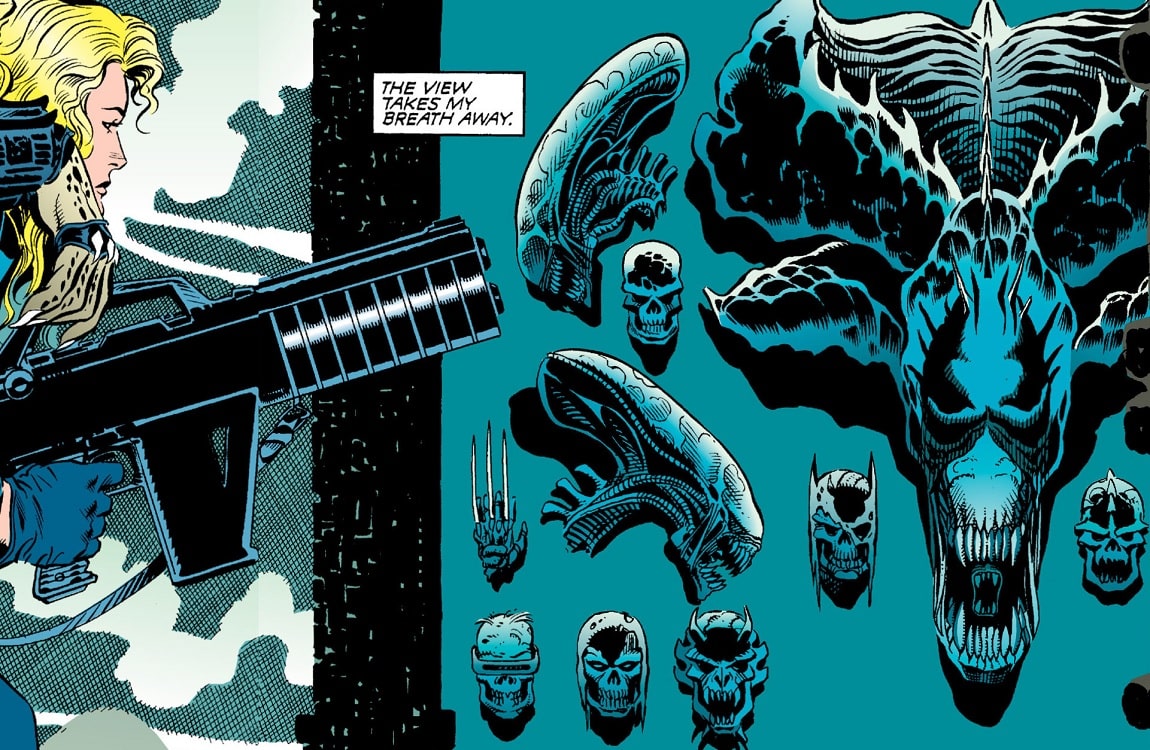 The first encounter between the 2 beings was hinted at in the Aliens vs. Predator: Deadliest of the Species comic series. An experienced female Predator named Big Mama was searching for her abducted children throughout the galaxy. Her ship featured a vast trophy wall which indicated her hunting successes. In addition to a few Xenomorph skulls, the trophy case housed the skull of Cyclops and the clawed left arm of Wolverine. Deadliest of the Species was written by Chris Claremont who was famous for the more iconic X-Men stories, including the Dark Phoenix saga. Although just an easter egg, this trophy seems to indicate a Predator victory, although a severed arm would be something that Wolverine could recover from. However, severing an arm of Wolverine is his adamantium form would be close to impossible. 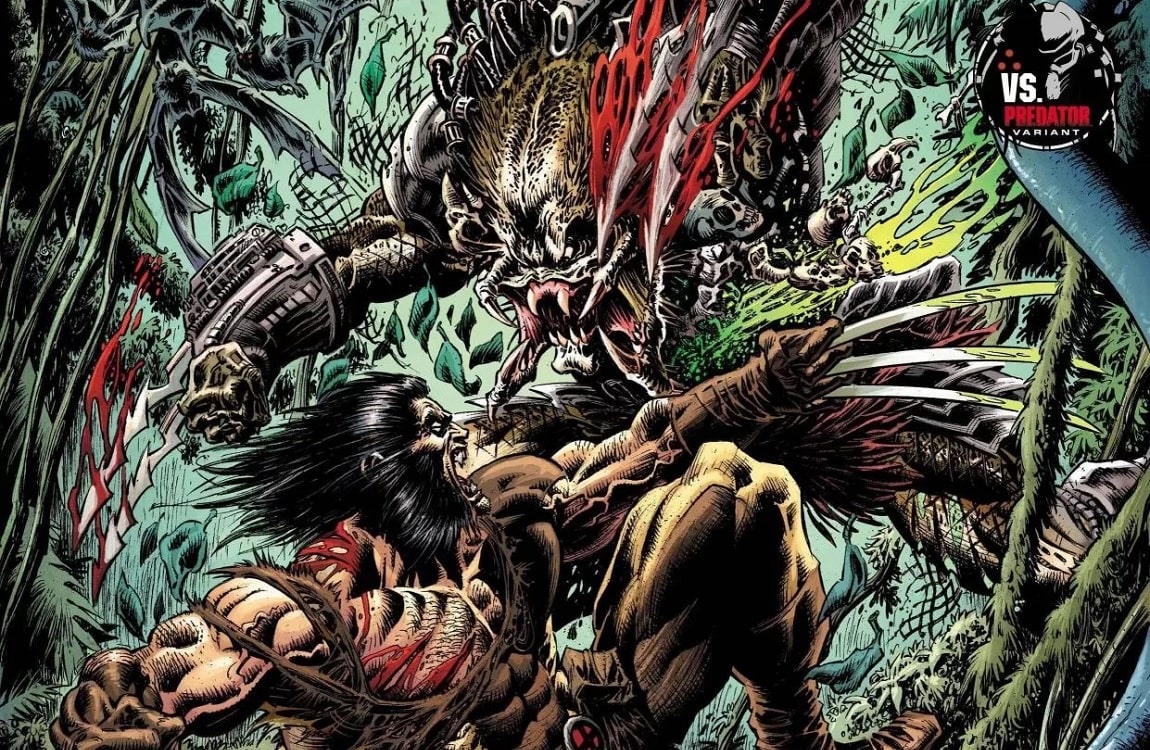 Dark Horse was famous for holding the Predator comic license for decades, developing dozens of Predator series, including crossovers with multiple DC universe characters like Superman and Batman. Marvel recently acquired the license with the acquisition of 20th Century Fox by Disney. A final hurdle in the way was removed when Disney resolved a dispute with the Thomas brothers over the ownership of the original Predator movie. This allowed Marvel to start their own line of Predator comics, including possible crossovers with Marvel characters. To celebrate this, crossover covers for most of the ongoing Marvel comic lines were created, including Wolverine. Although the proposed crossover event does not exist yet (only the cover), it depicts Wolverine engaged in a vicious and bloody duel with the Predator in a jungle infested with bats and snakes. A perfect setting for such an epic event.

Wolverine and Predator in Fortnite 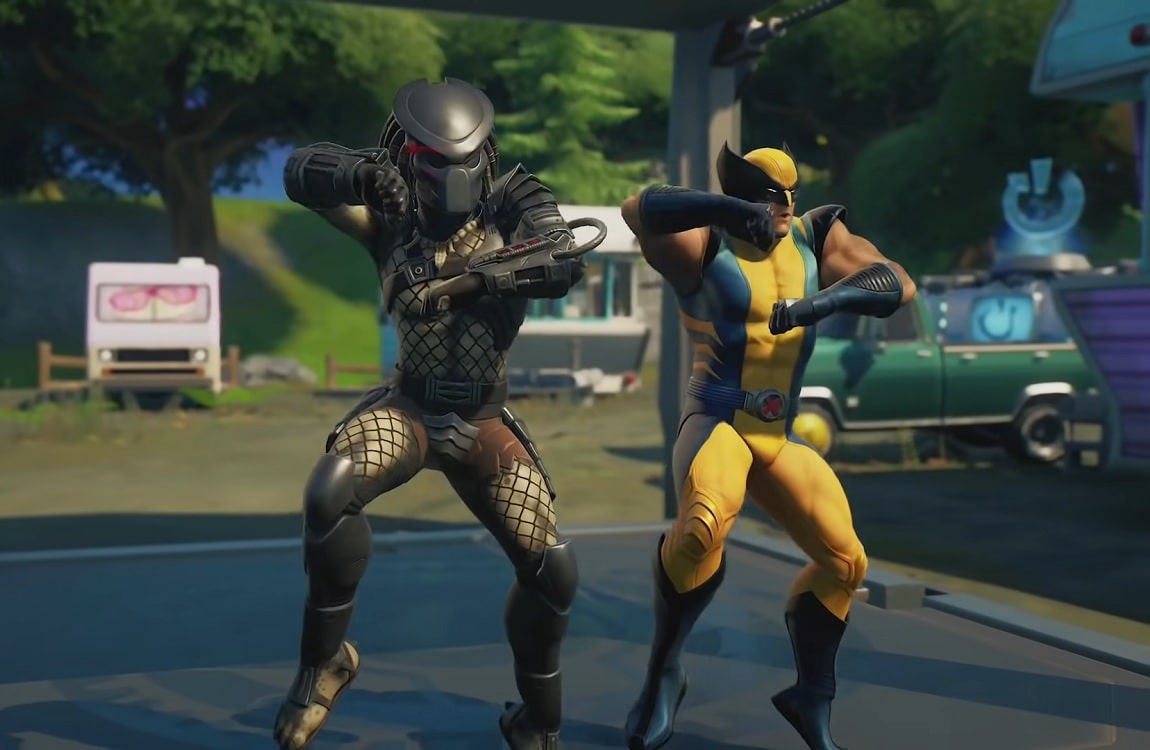 As was the case with Predator vs. Terminator, Fortnite allowed for the unique opportunity of Wolverine battling with a Predator in form of a video game. The Wolverine character outfit was released in 2020 and it came with its unique Wolverine Challenges and a Snikt! emote. Predator was released a year later and although it wasn't in the same season, players who obtained the Wolverine outfit could still duke it out with the Predator. However, as with the regular craziness of Fortnite, some players didn't fight but chose to have a dance session instead. Both characters are still in Fortnite, but most of their unique challenges and quests have since been removed. 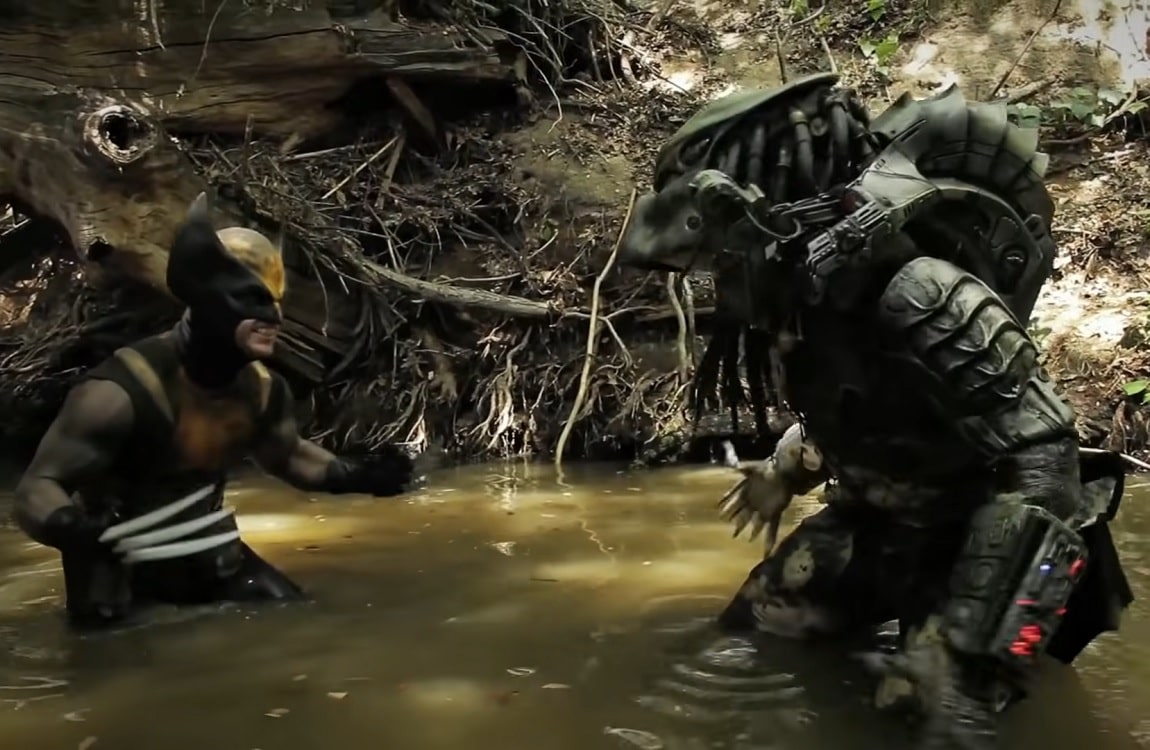 The best representation of a Wolverine and Predator fight comes from the web series called Super Power Beat Down. SPBD pitted many super-powered legends against each other and determined the winner. Episode 9 was titled Wolverine vs. Predator which was essentially a four-minute fan film of Logan encountering a Predator in the Columbian jungle. Although the jungle hunter stalked and hunted Wolverine at first, he quickly turned the tables and surprised the Yautja by emerging from a river. After the loss of the shoulder cannon, the fight soon turned into a stab fest, with both combatants viciously stabbing each other with their wristblades. Wolverine was gravely wounded but managed to impale the Predator through the head. Somehow the Predator started the self-destruct sequence and Logan had to flee, jumping down a waterfall but emerging victorious. Wolverine's healing factor is most likely the biggest advantage in a fight like this and it is no surprise that he became the winner.

Predator vs. Wolverine in Fan Art 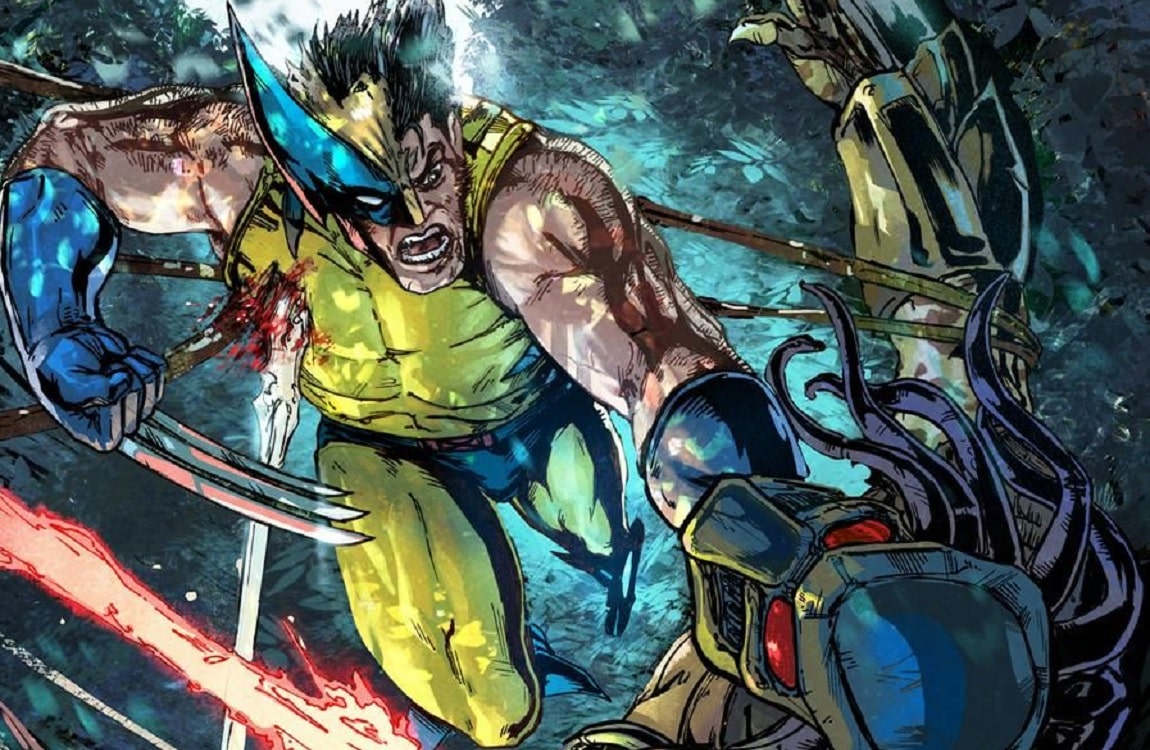 Predator fighting Wolverine is a popular topic among fan artists. In this artwork by VegasDay from DeviantArt, Wolverine is seen being in his trademark berserker rage while getting the upper hand on the Yautja. The hunter seems to be partially cloaked, but it is doubtful that cloaking would mask anything from Logan, who could find his prey by only the scent. Wolverine is stabbed in the chest, but would most likely heal in quick order. The Predator's shoulder cannon blast seems to have missed and the hunter would most likely be stabbed to death soon. 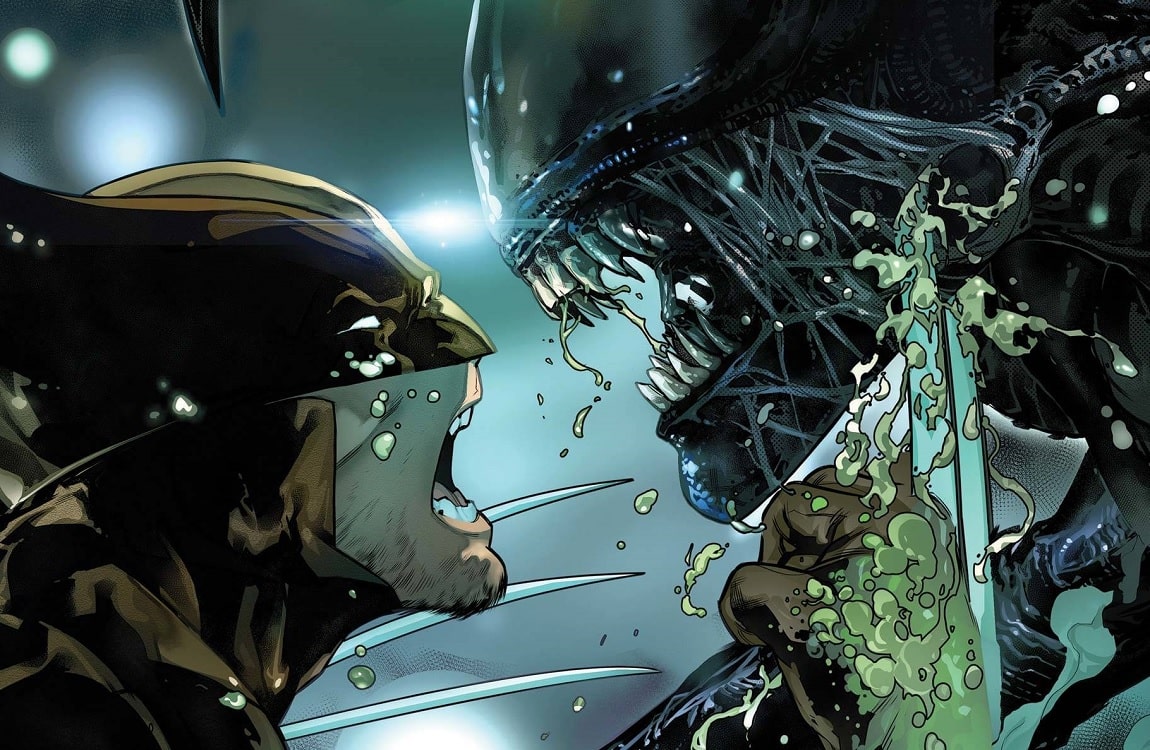 Marvel not only released variant covers of Predators fighting superheroes, they did the same for Xenomorphs. A variant cover of Wolverine vs. Xenomorph by R.B. Silva depicts Logan stabbing an Alien through the throat while it is dripping acid on his arm. This fight would most likely go the same way as Wolverine vs. Predator, with Wolverine being badly wounded but emerging victorious in the end. While the Predators had the advantage of advanced weaponry, the Xenomorphs would overwhelm with numbers. The acid damage would heal quickly but Wolverine would have to be worried about a facehugger. Most likely the resulting chestburster would have trouble emerging from his adamantium ribcage, but could emerge from his mouth. Again, this would not be fatal for Wolverine, but the Wolverine-chestburster would certainly cause a lot of trouble for the X-Men.

Want to know more about the Predator fighting different enemies? Check out the list of the Predator vs. Engineer fights and the overview of Yautja hunting wild animals.