The female Yautja are fearsome warriors just like their male brethren. Little is known about them and there are only a few notable specimens. When they have a mate, they prefer to hunt together, sometimes even die together. They are often more calculative than males, who tend to be more reckless. The female Predators have never been featured in the movies, they are only in the books, graphics novels and games. Here is a overview and list of all notable female Yautja who have hunted during the long Predator timeline. 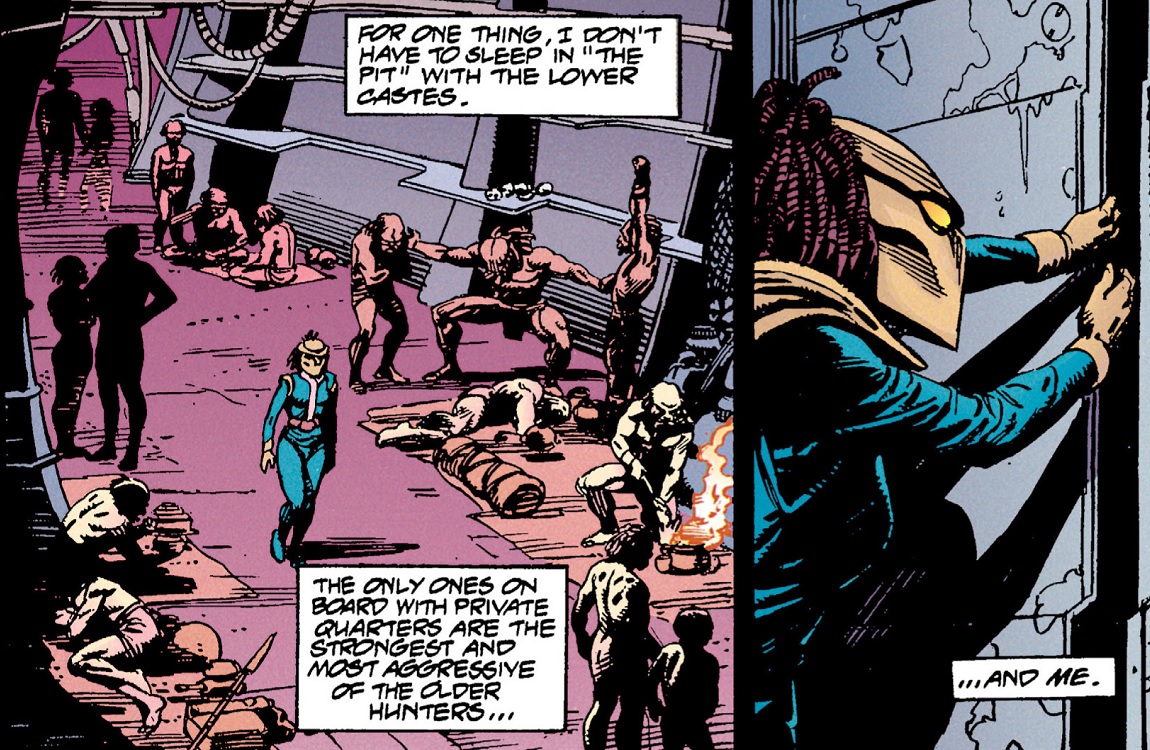 As with individual female Predators, the depiction of Predator society and family life is rare in the Predator lore. There are a few glimpses in the Aliens vs. Predator: Prey book and the Aliens vs. Predator: War book and comic. Mothers lived together with their children in small families. Furthermore, the Superman and Batman versus Aliens and Predator comic series took a grounded look at a hidden Predator society hidden in the mountains of South America, with Predator mothers tending to Yautja children while living a simple tribal life, confirming what was seen before in the AvP comics. The much-hated Predator: Forever Midnight took a different path by explaining that Predators (named Hish-Qu-Ten, who are most likely subspecies) could change their gender at random. 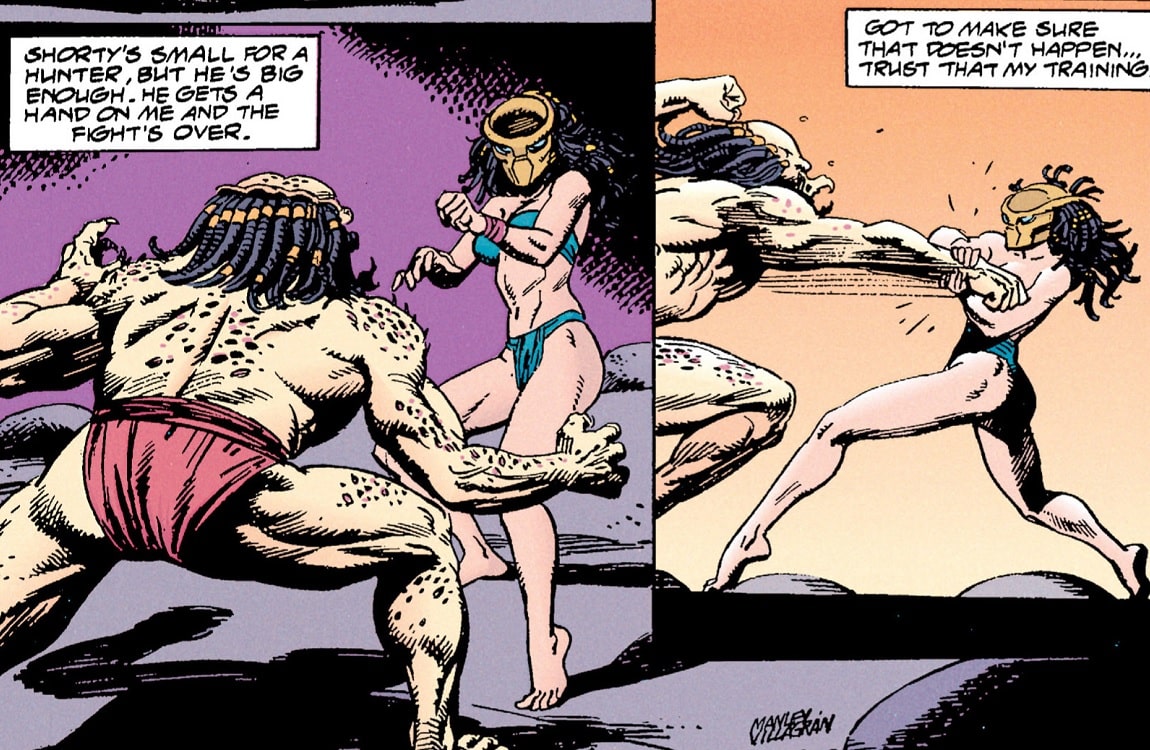 Mating was said to be pleasurable and the females tended to be more aggressive in the act. For regular Yautja, children were born similarly to mammals and did not hatch from eggs, as one might expect from a reptilian race. For the Hish-Qu-Ten, children were born in bigger groups and were called "spawnlings". The genderless Hish could have about seven children as average and taking care of them was often considered an annoyance. There are no cases of Predators mating with humans and this would be most likely impossible, although there has been sexual tension between a few individuals. For example, human Predator Machiko Noguchi fought with a small Predator nicknamed Shorty while both were almost naked, resembling a strange mating dance. Scar Predator also had a weird affection for the human female Alexa Woods, but their sympathy was cut short by the Alien Queen. 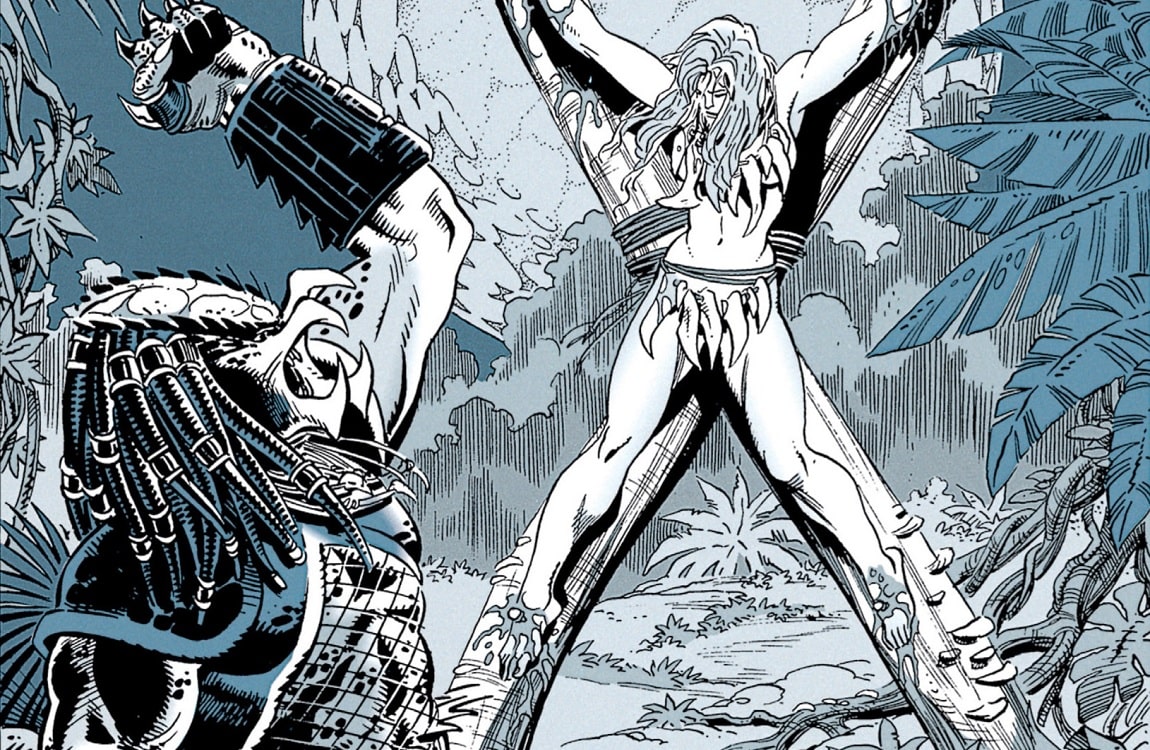 The size and shape of female Predators have been a bit inconsistent throughout Predator lore. The first descriptions in the AvP: Prey book and the Deadliest of the Species comic hinted that female Predators are bigger than males and might not have any female features like breasts and mammary glands at all. Later inclusions in the Predator: Hunting Grounds game, Predator: Stalking Shadows, and Aliens vs. Predators: Ultimate Prey book described them as about the same height as males, being more agile and lean, and having breasts that were covered in armor. Their heads have been shown to be narrower, with smaller eyes and longer dreadlocks. The Female Predator's height has been about 2-2,5 meters, depending on the individual. The following is a list of all known female Predators, both from the old and new Yautja lore. 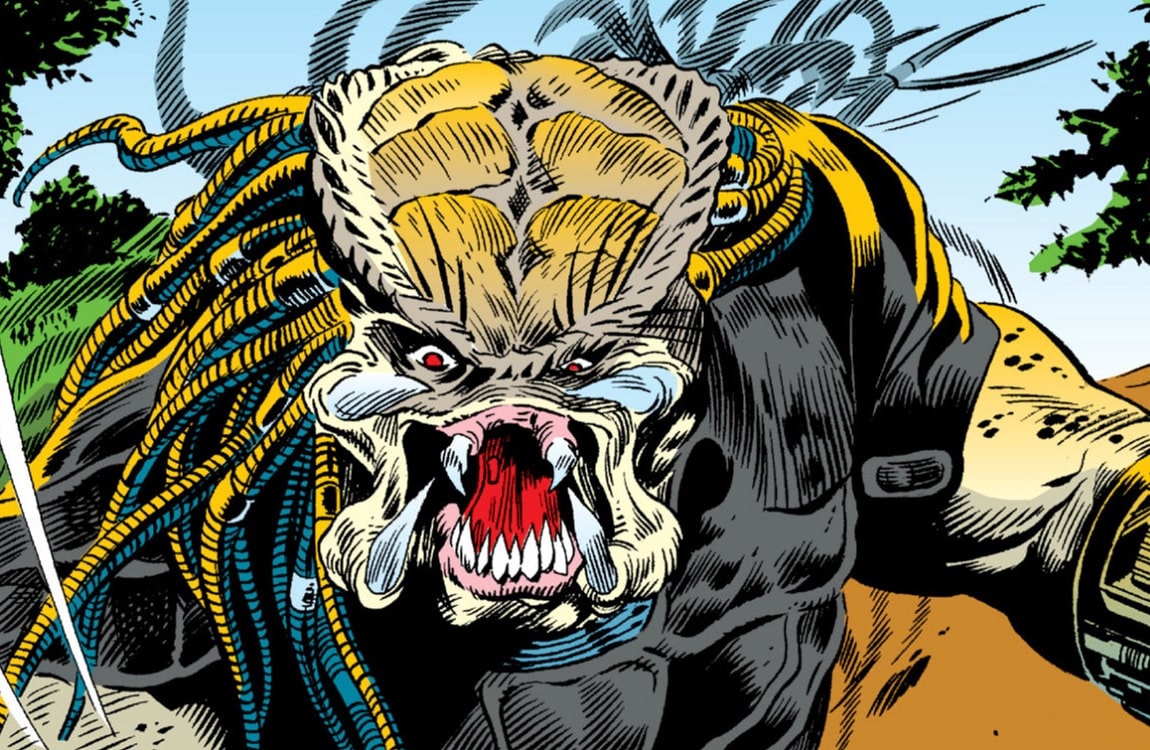 Big Mama was a female elite hunter who had little female features but was much larger than an average Predator. Big Mama trained Caryn Delacroix (also known as Ash Parnall) and a group of mercenaries to be elite Alien hunters. Together they battled and killed several Aliens, white hybrids, robot Aliens and human soldiers. Although wounded several times, she is one of the few Predators to successfully survive the hunt. Big Mama was featured in the Aliens vs. Predator: Deadliest of the Species comic book, which is part of Aliens vs. Predator Omnibus: Volume 2. 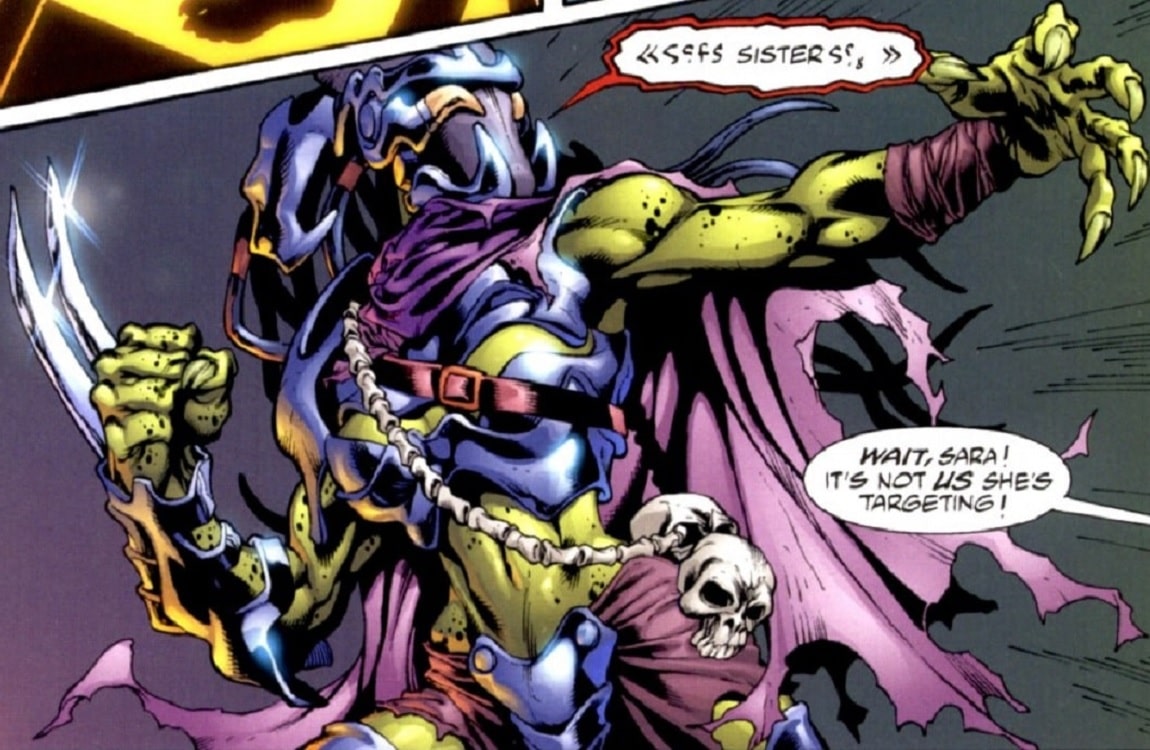 Sister Midnight was a female Predator who found herself mysteriously drawn to the power of Witchblade. She breached the hull of a spacecraft that was attempting to infest Earth with Aliens. Sister Midnight fought a DarkAlien (a Xenomorph born from a Darkling) and was badly injured. She died while detonating her self-destruct device which destroyed the spaceship. However, she was able to complete her mission by destroying the Alien menace. Sister Midnight was featured in the Witchblade/Aliens/Darkness/Predator: Mindhunter crossover comic, released from 2000 to 2001. 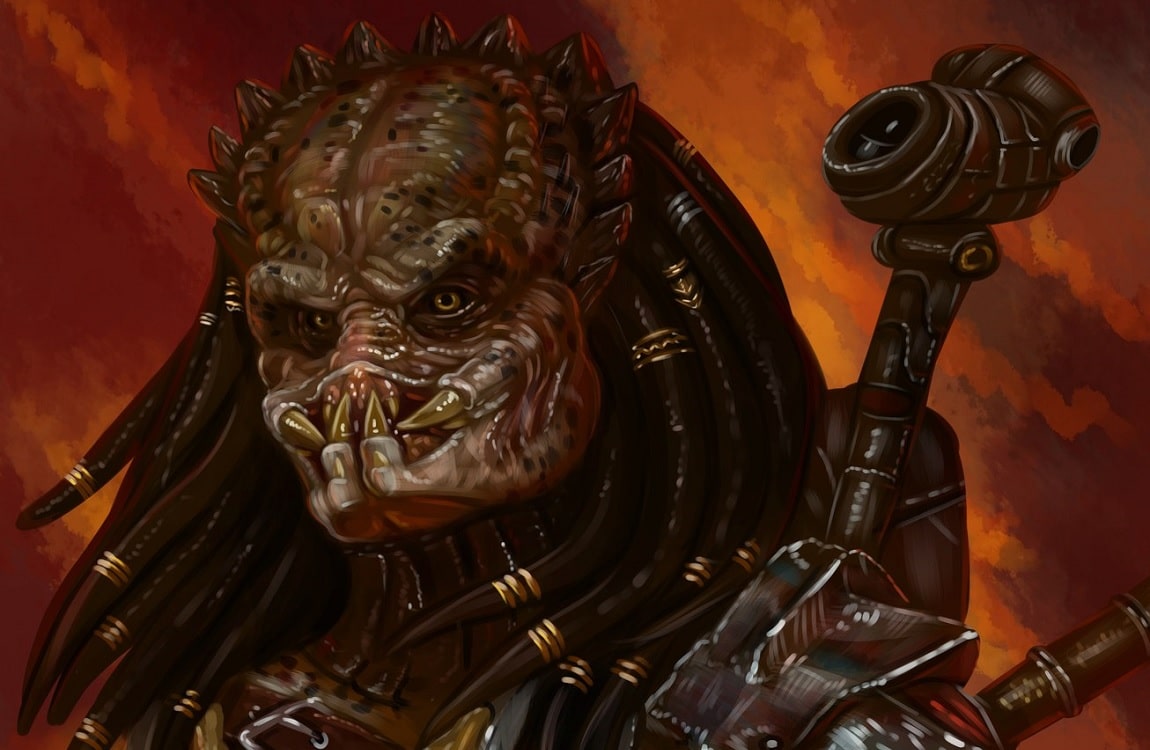 Vagouti was a female Yautja who traveled to Earth together with her male companion, Nakande. Vagouti was larger and more experienced by Nakande, but they were both expert hunters or possibly even retirees (wanting to make one last hunt). They wanted to exact revenge on humans who killed their brethren nine years before in Alaska. Together they located Sloane and Mary, two special forces snipers living a quiet life in a remote Oregon forest. Vagouti and Nakande slaughtered a group of bikers but failed to kill Sloane and Mary. First Nakande was killed in an ambush. Sloane mortally wounded Vagouti, who set off her self-destruct device. However, the humans were able to escape the blast radius. Vagouti was a female Yautja in the Predator: If It Bleeds anthology book story "Rematch", released in 2017. 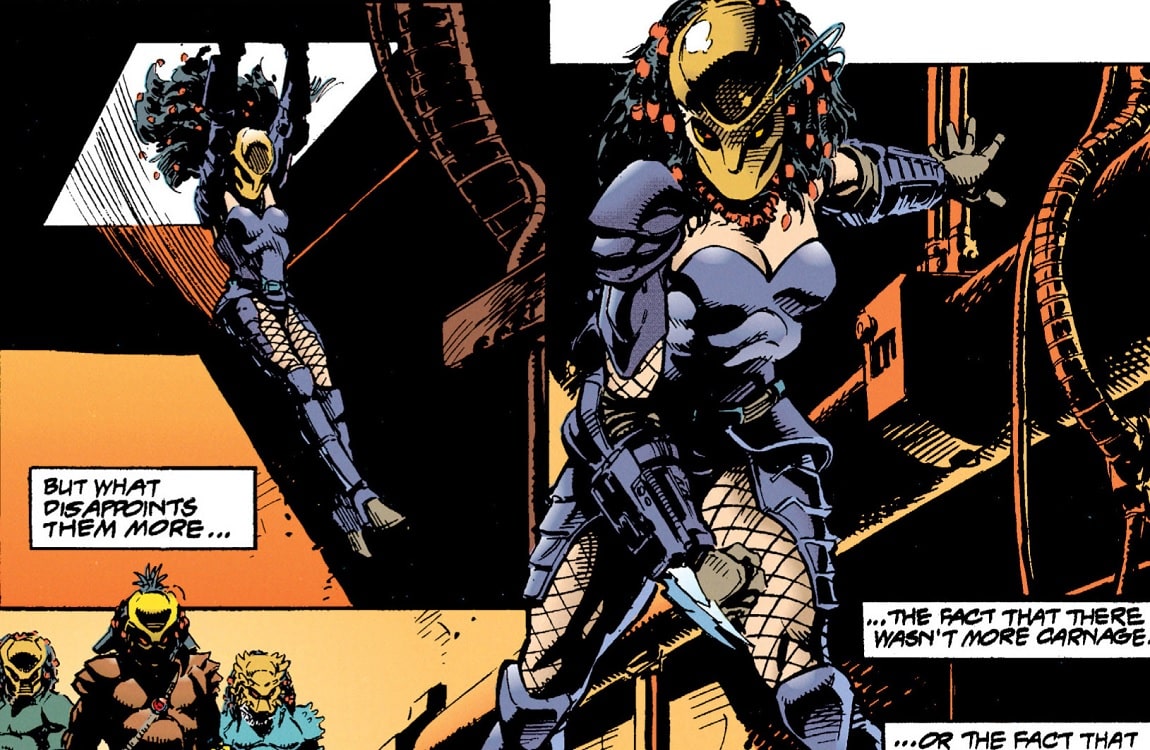 Machiko Noguchi was a human female who lived and hunted together with a Yautja clan for over a year. Although she was not a female Yautja per se, she was an accepted member of the group and went to several successful hunts with the Predators. She was blooded by a Yautja named Dachande on the colony planet Ryushi. Machiko Noguchi killed at least one Alien Queen and kept her head as a trophy on her wall. She used all the gear a normal Predator would but sometimes chose to use her trusty human pistol as well. Machiko Noguchi first debuted as the main character in the Aliens vs. Predator comic series, released in 1991. She had more adventures later in comics like Aliens vs. Predator: War and Aliens vs. Predator: Three World War. 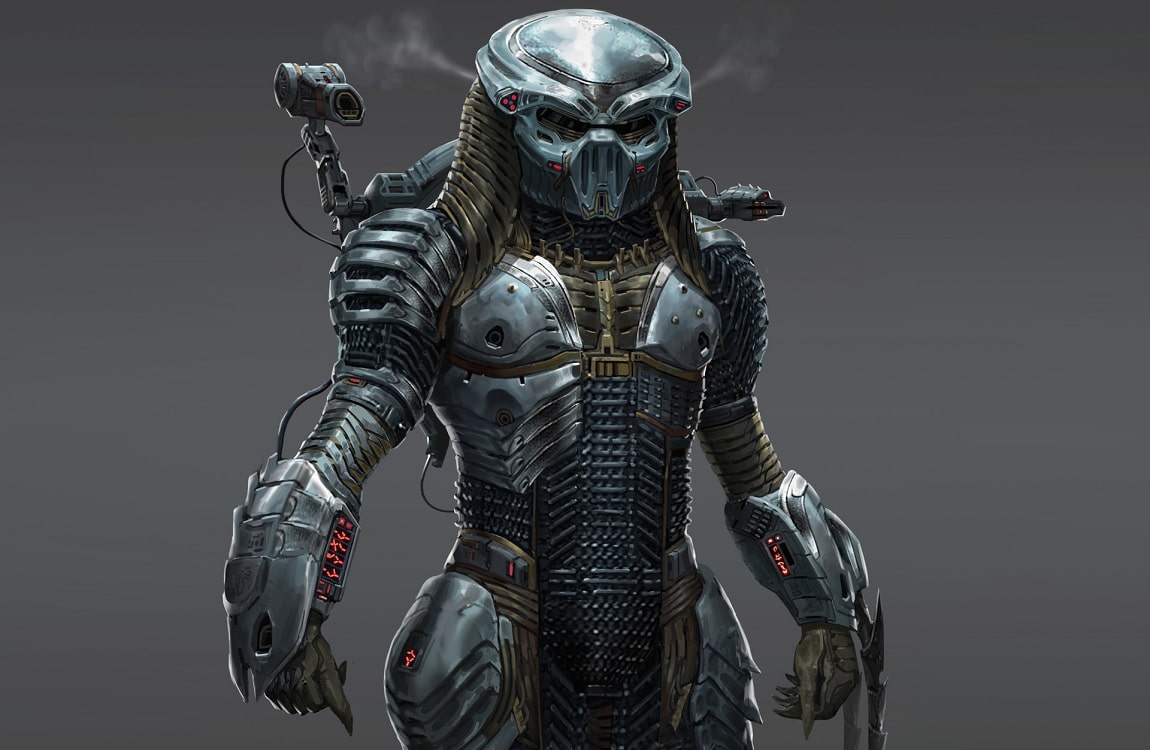 Hashori and Yaquita were female Predators from the Rage War trilogy of books, starting with Predator: Incursion. Hashori was a fierce and aggressive member of the Widow Clan, battling both humans and Xenomorphs with great anger. She took pleasure in torturing her enemies. One of the most memorable and sick sequences in the first book involves Hashori torturing a female android with a whip that contains bug larva that hatched in the wounds. However, Hashori later joined forces with the android and humans against a common threat. Yaquita was the only known Yautja to lose both legs and survive. She was wheelchair-bound and acted more like a scientist than a warrior. She too joined forces with humans and was much more level-headed than Hashori. 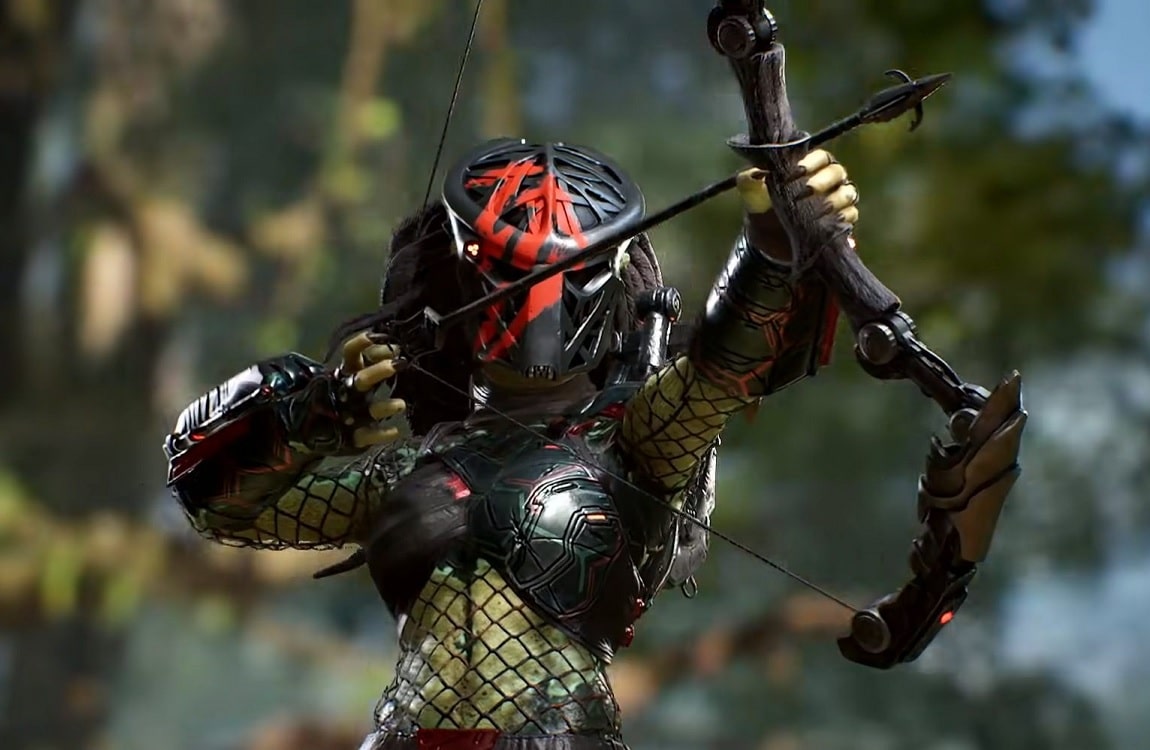 When Predator: Hunting Grounds was released in 2020, it finally introduced Female Predators into video games as well. All initial Predator classes, including the Berserker Predators, were available as females, with sophisticated customization options. Although the game was multiplayer only, it shared some story details as well. Supposedly, a female Yautja huntress fought Dutch Schaeffer years after the first movie and again killed his whole team. Dutch was wounded in the face with a netgun, but left alive to ponder about the futility of fighting the Predators. 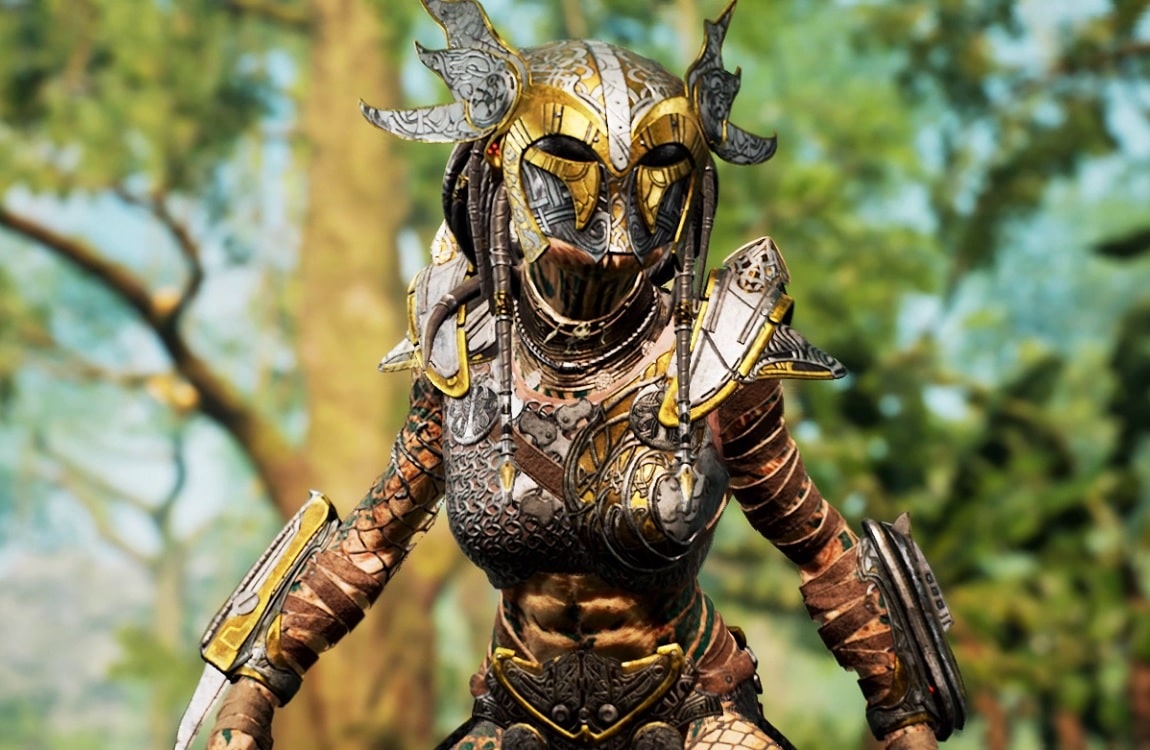 Recently, the Valkyrie Predator was released as a DLC pack for Predator: Hunting Grounds, introducing a female Predator avenger who fought the Vikings hundreds of years ago. Similar to the female Predators introduced later in the franchise, she was lean and agile, but nonetheless very ferocious. The character came with a Norse hammer and her armor was customizable with both gold and silver colors. In the Yautja lore, she came to Earth to avenge her fallen brothers and send Viking warriors to Valhalla, giving them an honorable death that they often sought.

The Cleopatra DLC pack for Predator Hunting Grounds revealed that the female Predator who attacked Dutch was a Cleopatra Predator. She killed Dutch's second team and left him alive for unknown reasons, showing mercy, a rare trait for a Predator. Cleopatra came with golden armor and a specialized smart disc, resembling a chakram. She had very short dreadlocks that ended with golden ornaments. Like other females, she was fierce, direct and did not mess around with her prey. Unlike the Valkyrie Predator, there is no mention of Cleopatra having any historical hunts, she most likely only hunted during modern times. 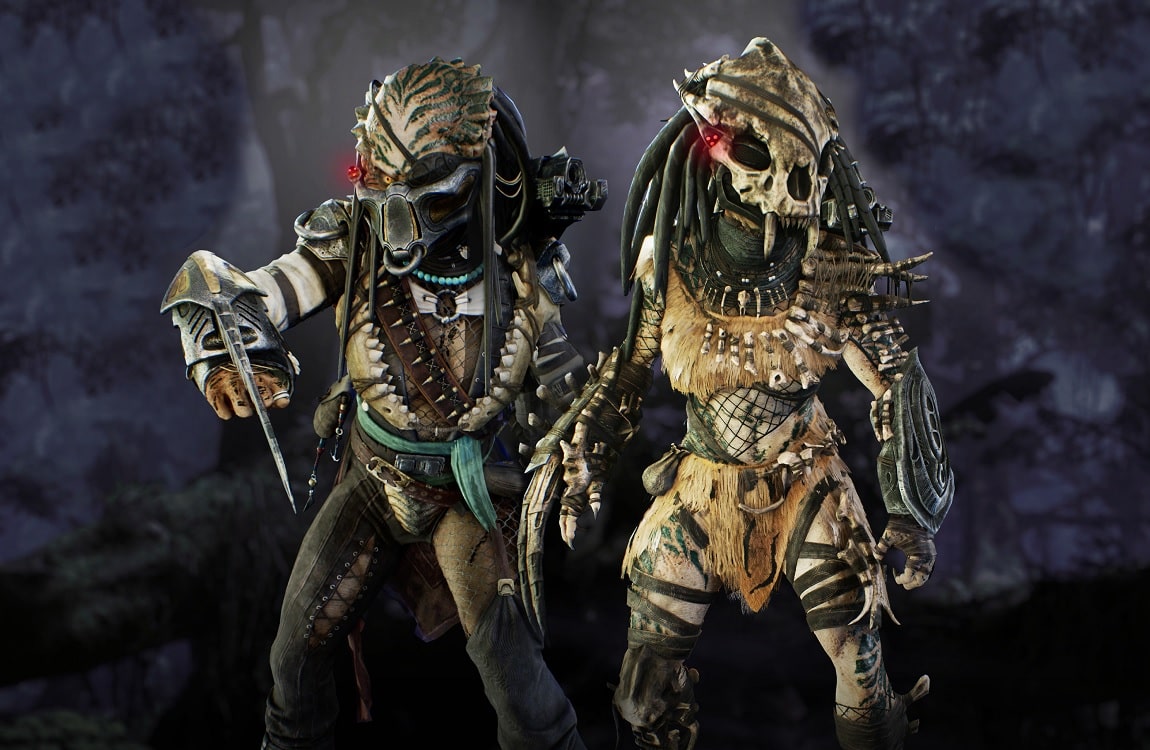 The Pirate Predator and Amazon Predator were the last and final Female Predators released to Predator: Hunting Grounds. Although they were in a single DLC, it is unlikely that they ever hunted together or even met each other. The Pirate Predator was one of the few Predators to hunt on the seas, being active during the Golden Age of pirating. She was made distinct with an eyepatch (after losing an eye), a bio-mask over only the lower part of her face, a single cutlass-like wristblade, and the jaws of a large sea-creature around her neck. On the other hand, the Amazon Predator hunted in the jungles of Brazil, and was similar to the Feral Predator in design, especially with the bone-shaped bio-mask. She was said to hunt mostly jungle wildlife. 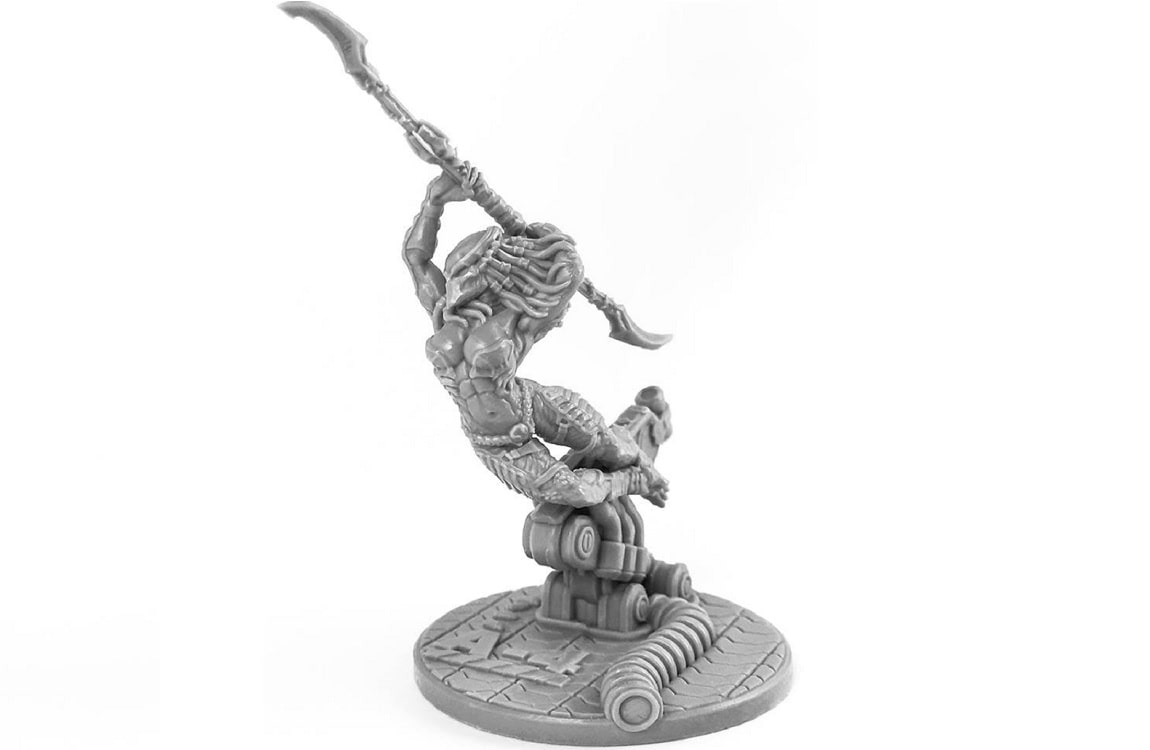 Female Predators were also featured in the Alien vs. Predator: The Hunt Begins board game by Prodos Games. They were not part of the initial game but released as miniatures in an expansion pack. Like in the case of Big Mama, the game makes a point of the females being larger and stronger than males. In 2017, Prodos Games launched a new rulebook for the existing miniatures, offering more details about the AvP universe. In this lore expansion titled AvP: Unleashed, a fearsome female named H'chak was mentioned, meaning "Mercy" in the Yautja language. H'chak followed a crashed human vessel to an unnamed barren planet with the intention of a good hunt, although its final outcome is up to the player. 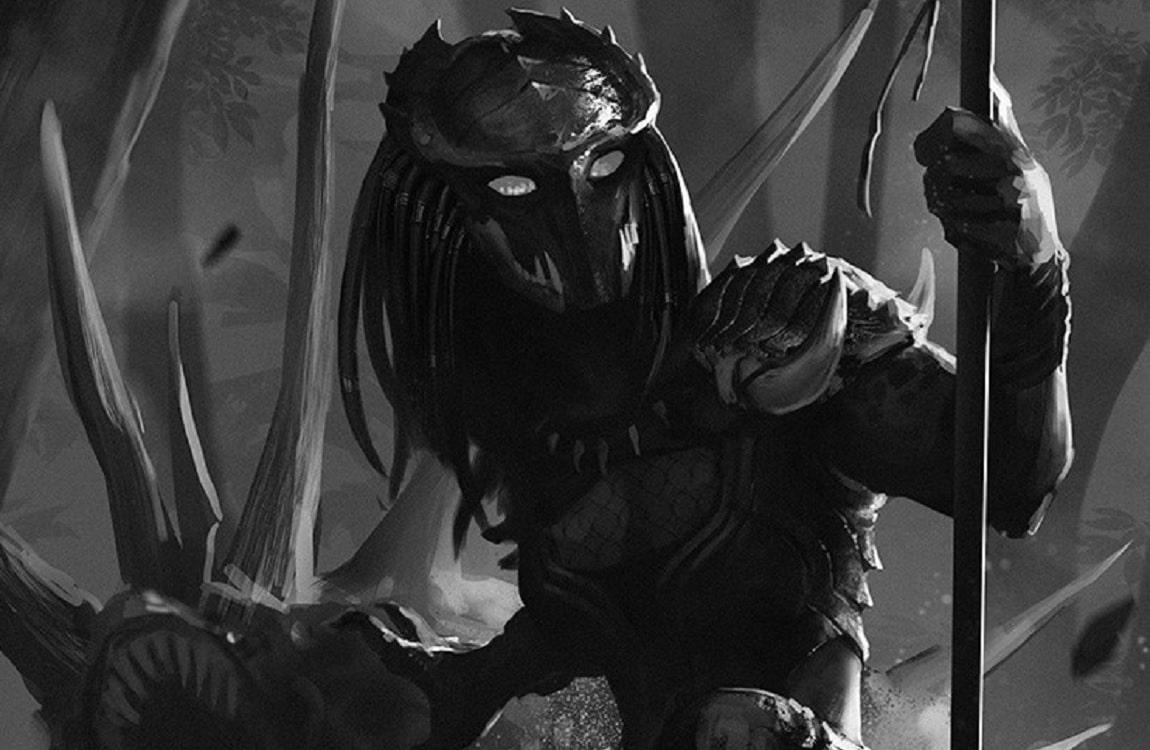 Female Predators are a popular topic in the Predator fan art community, spanning DeviantArt, ArtStation, and Pinterest. The females are often sexualized with exaggerated breasts and very feminine features. Not often are they seen with children or being larger than males, like Big Mama. One of the most prominent artists to draw great-looking female Predators is mist XG who usually creates black and white images. His female Yautja are depicted as aggressive hunters with lean bodies, but not oversized breasts. Predator: Hunting Grounds took a very similar route with its female Predators.

Want to know more about Predators? Check out the list of the best Predator books and the different Predator types.