Much like the Yautja females, there is not much know about the Yautja children. There are only a few glimpses in the comics and references in the books. Most likely, their childhood takes a longer time than humans as their lifespans can be hundred of years. They begin training at an early age and keep close relations with their parents. It is interesting to note that most of the Predator society and culture lore is explained in crossover comics, and very little in Predator specific books and comics. Here is an overview of the information about the Predator children. 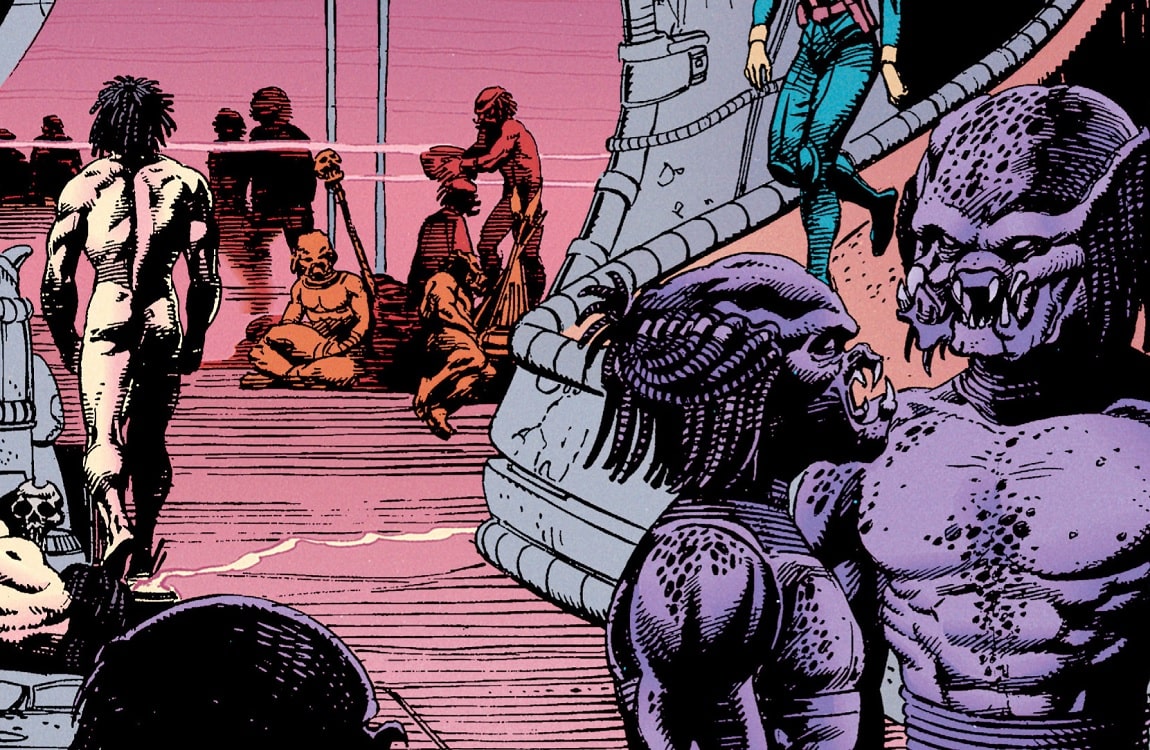 The first glimpse of a Predator society with children was provided in the Aliens vs. Predator: War series. A human hunter called Machiko Noguchi lived together with the Predators for about a year and was able to observe their daily life. Groups of Predators of different ages mingled around on the Predator ship. She was able to see young Predators with short dreadlocks conversing together. The taller one was probably a teenager while the shorter was just a child. They most likely trained together as well and were not using any bio-masks yet. 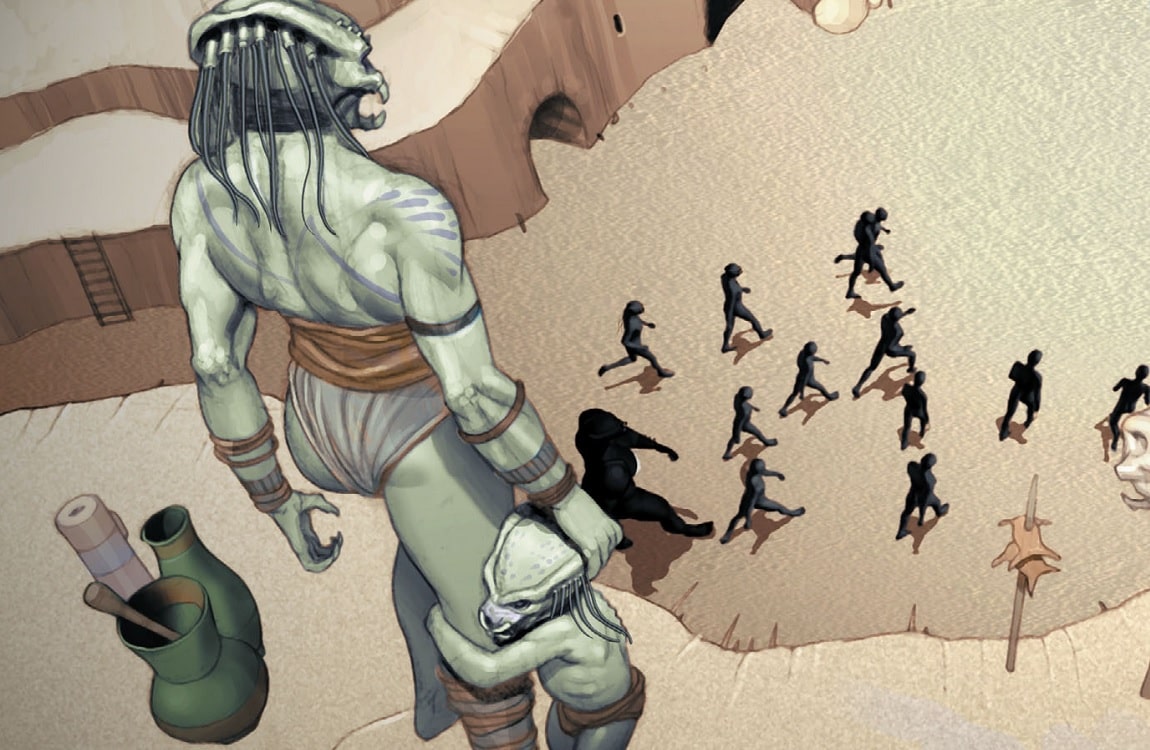 Another depiction of Yautja children comes from the Superman and Batman vs. Aliens and Predator crossover series. A group of Predators was living in secret caves under the Andes mountains on Earth and was discovered by Batman. They lived a tribal life with little technology involved. A Predator toddler was seen clinging to a leg of a parent Predator (probably a female). Compared to the children from AvP: War, these Predator children don't have shorter dreadlocks, but thinner instead. 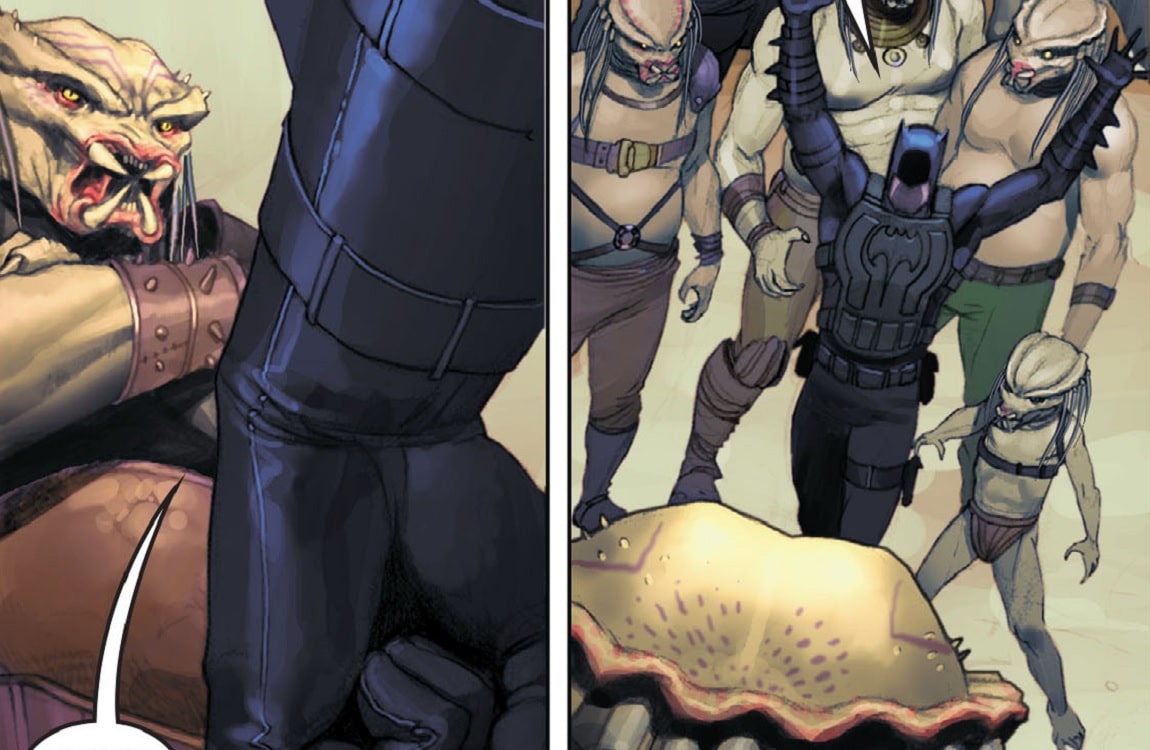 An older child wearing a chest strap joined a group of Predator warriors to challenge Batman. This one was probably already being trained in the arts of the hunt, similarly to the Spartan Agoge program.

The Hish-Qu-Ten are a weird offshoot of the Yautja that appeared in the Predator: Forever Midnight book. The Hish-Qu-Ten children are called spawnlings and a Predator can have half a dozen of them at once. The spawnlings are born from a female Predator, but a Hish-Qu-Ten can change their genders involuntarily at random times. Instead of taking their children to educative hunts, the Hish-Qu-Ten use remote-controlled humans that their spawnlings can use to attack others. The children see through the eyes of the humans and can control their movements. These humans can even be women and children. The spawnings take one of the Predator names of their parents, ie. one of the sons of Shesh-Kuk was Shesh-Terk.


The Children of Big Mama

In Aliens vs. Predator: Deadliest of the Species, a female Predator named Big Mama had her teenage children kidnapped by the employees of a greedy mega-corporation named Montcalm-Delacroix et Cie. She had great affection for her children and this was the driving her to join forces with Ash Parnall to fight the corporation. She was compared to a fierce female lion fighting for offspring by Ash. In the end, she gains them back although the reunion is never shown. There seemed to be four of them sleeping peacefully in stasis pods, while their mother watched over them. 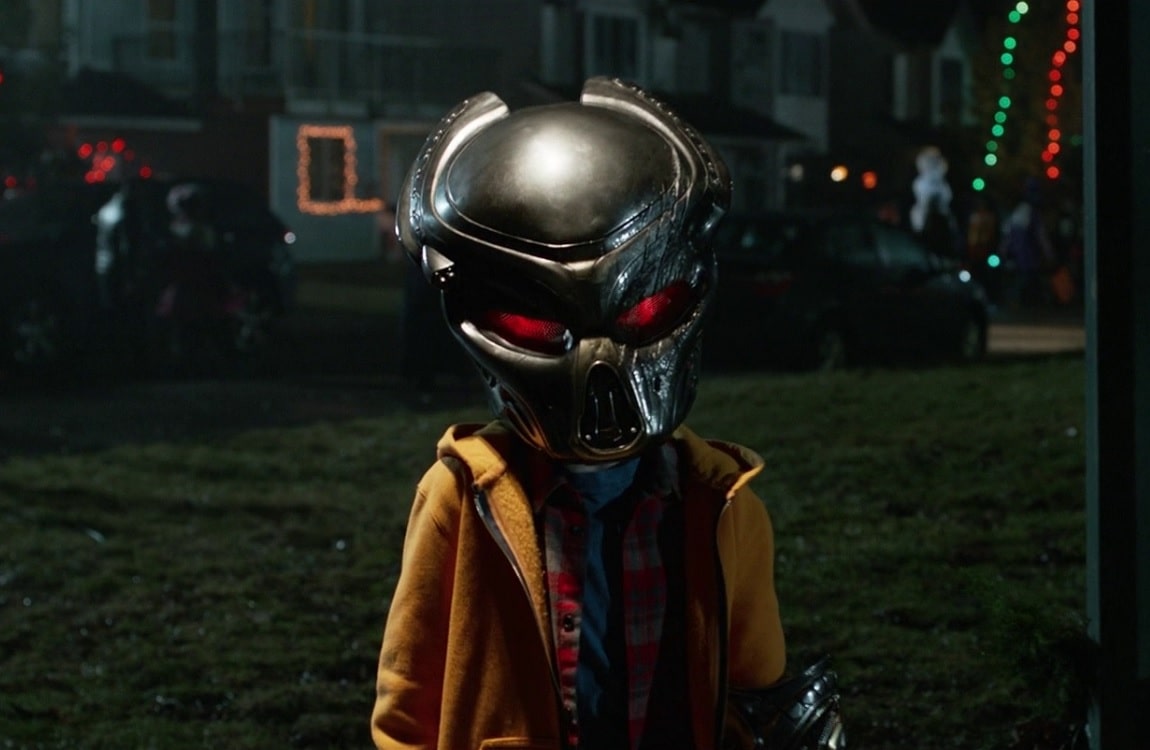 In Predator, Rory McKenna, the son of Quinn McKenna, acquired a Predator mask and wore for Halloween as a costume. Of course, that didn't make him a Predator child. However, it was later revealed that the Predators are prone to kidnap human children and harvest certain DNA traits for their own species. In this case, the Predators were interested in the high intellect of the boy, or his Asperger's syndrome. It makes little sense, but maybe they wanted to enhance their intelligence by leaving the negative traits of the syndrome away.