In addition to advanced weaponry, the Predators employ a wide range of non-lethal gadgets and equipment to aid them on their hunts. This consists of healing devices, different forms of protection, energy recharge devices, and much more. The question of who exactly built all this technology is up for debate, but the Rage War book trilogy indicates that it has been stolen or absorbed from other races. Here is an overview of all the known Predator hunting tools and gear. 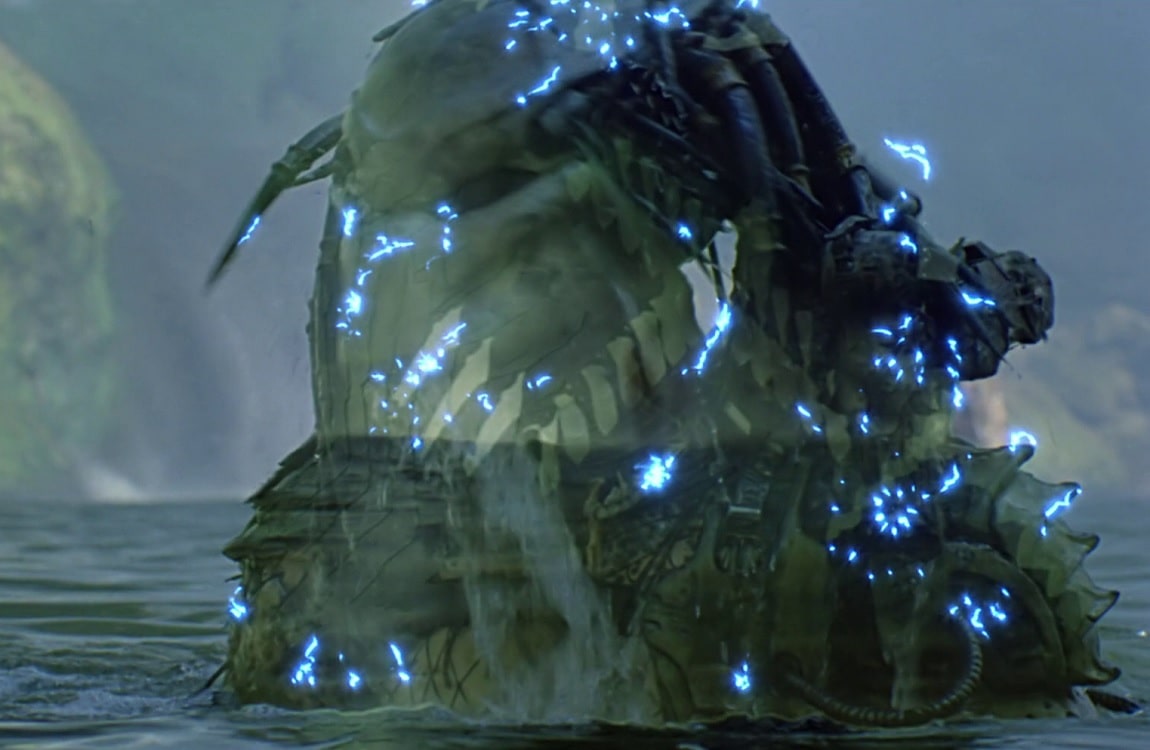 The cloak allows the Predator to render himself almost invisible to the naked eye, giving a close to perfect camouflage in most environments, including the jungle. The cloak "bends light" around the Yautja, showing distortion in the place of the Predator, but the distortion is almost impossible to see if the Predator keeps still. The drawbacks of the cloak include the fact that it drains the shared energy of the Predators power pack, so it cannot be used indefinitely. It will also malfunction in the water, and would also likely not work during rainfall. The Yautja like to stalk their prey with the cloak enabled but often choose the show themselves just before the kill. 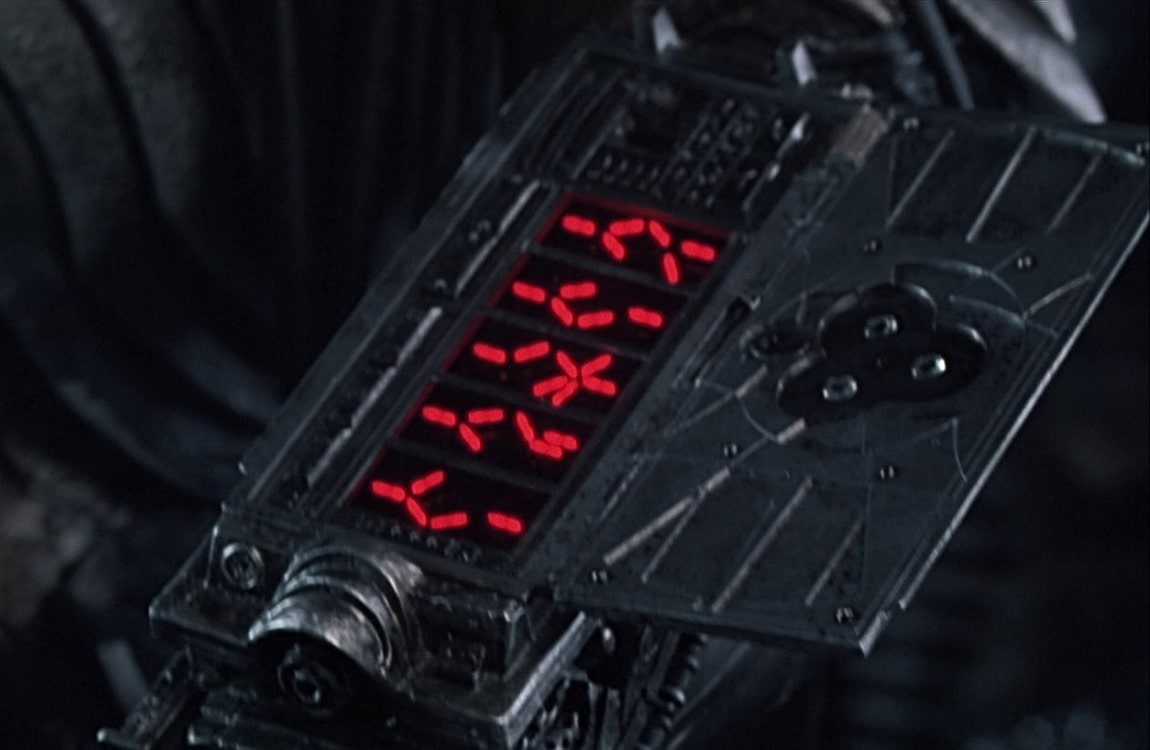 The wrist gauntlet is like a portable mini-computer that is usually attached to the left arm of the Predator and operated with the right. It contains many useful tools, like the ability to remote-control Predator ships, activate the self-destruct, check the power level of its weapons, and in more recent cases, show holograms. The Aliens vs. Predator 2 game pointed out that the gauntlet is difficult to remove and taking it off might actually kill the Predator. This was contradicted later by the first Alien vs. Predator movie where Scar removed it easily and used it as a portable bomb to take out the Alien-infested temple. The gauntlet shows Yautja symbols, and these will "count down" in case of self-destructing. 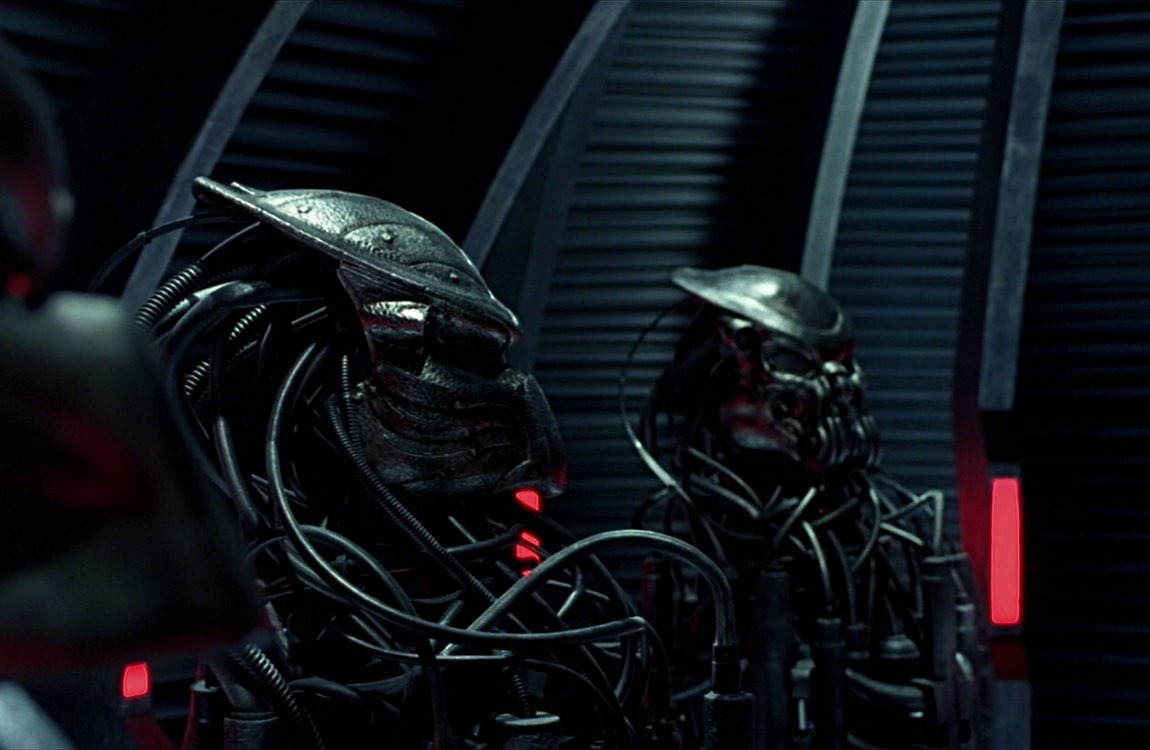 Besides the wrist gauntlet, the bio-mask is perhaps the most important piece of Predator technology and often a prized trophy for anyone killing or capturing a Predator. It allows the Predator to breathe in hostile environments, probably including space, and provides the ability to see in different vision modes. These include most famously thermal vision, but also Xenomorph vision, ultraviolet vision, and tech vision. Almost every Predator has a unique bio-mask design and these are sometimes further decorated by paint, carved symbols, or just scratches and marks from different battles. The bio-mask provides some protection for the Predator's face from bullets and stabbing weapons, but surprisingly is unable to stop a Xenomorph head-byte. 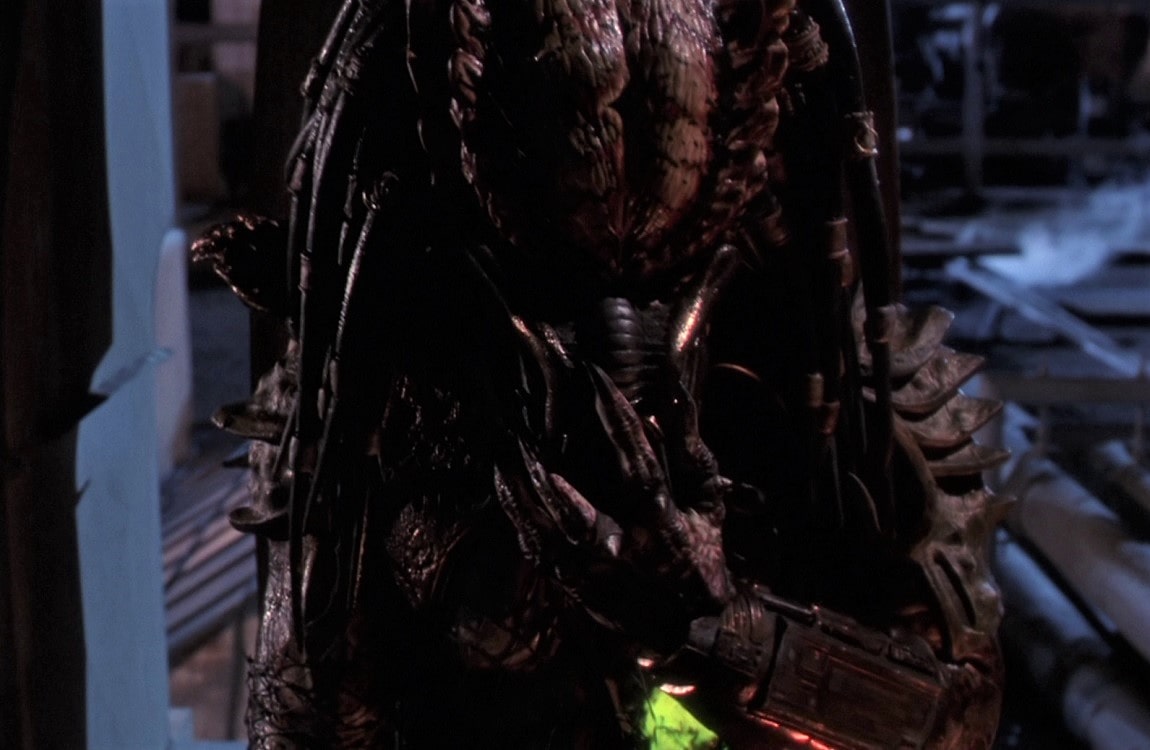 In addition to the bio-mask, the Predator has an additional backup breathing mask for emergency situations. Although the Predator can breathe more or less fine in Earth's atmosphere for a time, this can become difficult while wounded. After losing the bio-mask, the Predator can use this breathing mask as a backup to reach his ship to acquire new gear. The mask is similar to a scuba diving second-stage octopus, meaning it can also be shared with other Predators if needed. The mask provides a more nitrogen-rich breathing mix that the Yautja are used to, possibly very similar to the atmosphere of the Predator homeworld. 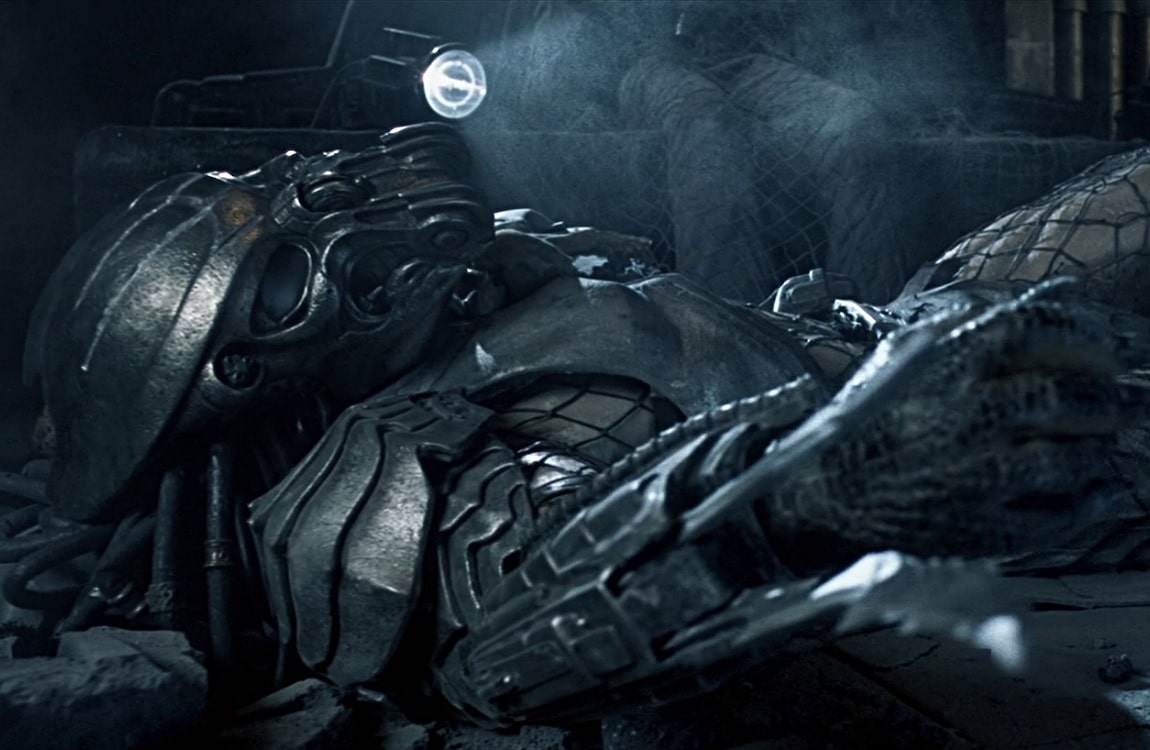 The Predators use a different variety of armor, ranging from totally unarmored to heavily armored or even using a full body suit, like the Predator Killer. The first Jungle Hunter used armor which was a bit randomly scattered around the body, with the most heavily armored parts being the crotch and the left chest area, possibly protecting the Yautja's most vital organs. The Young Blood Predators from the first Alien vs. Predator movie were one of the most heavily armored Predators seen in the lore. They had chest armor on both sides and the arms were almost completely covered. This certainly restricted mobility and hindered their fighting abilities. Furthermore, as it turned out, it only provided limited protection, as the Xenomorph acid was able to eat through at least part of the armor. 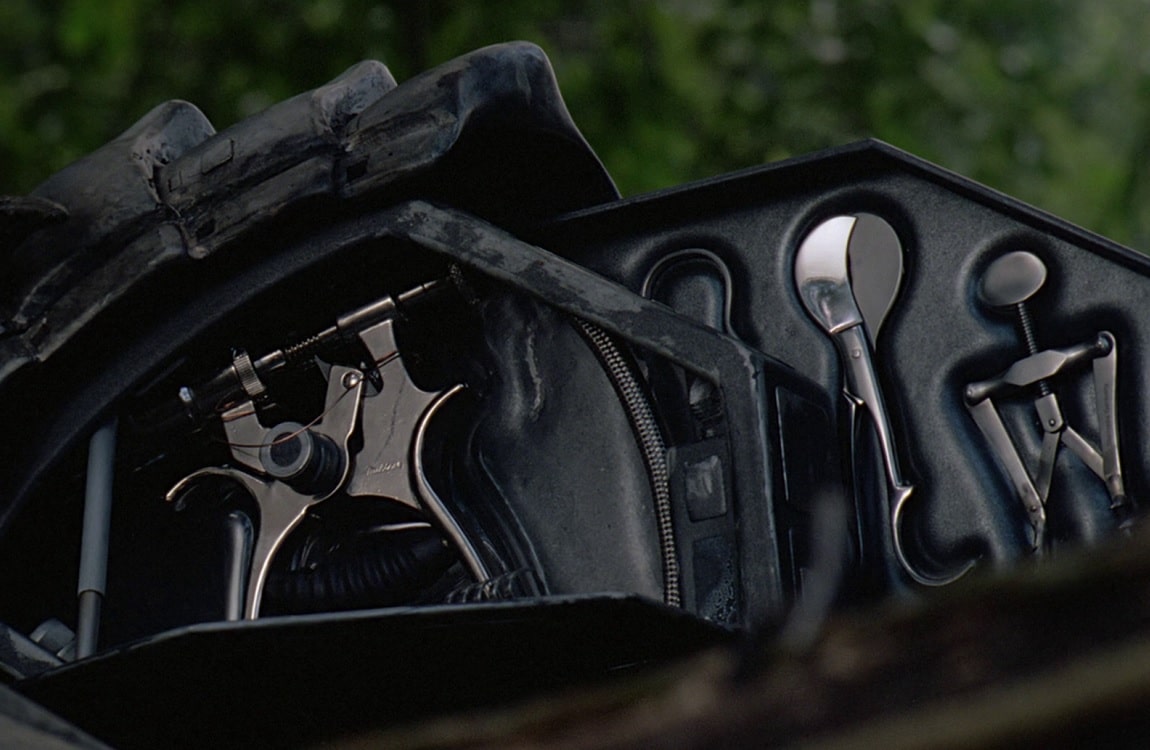 The medicomp (also known as medikit) is the Predator's primary healing device in the field. It contains many medical devices to provide quick first aid, stop bleeding, administer painkillers, and even cauterize wounds from severed limbs. The Jungle Hunter had a basic medicomp in his shoulder satchel that he used to recover from a bullet wound received in the leg when shot by Mac. The City Hunter had a bigger medicomp with more devices that allowed him to create blue healing goo by burning random substances. He then administered the goo on his bleeding stump where Harrigan had sliced off his left arm. The Predators have more healing devices like the two healing syringes from Aliens vs. Predator Classic and the health shards from Aliens vs. Predator 2010. 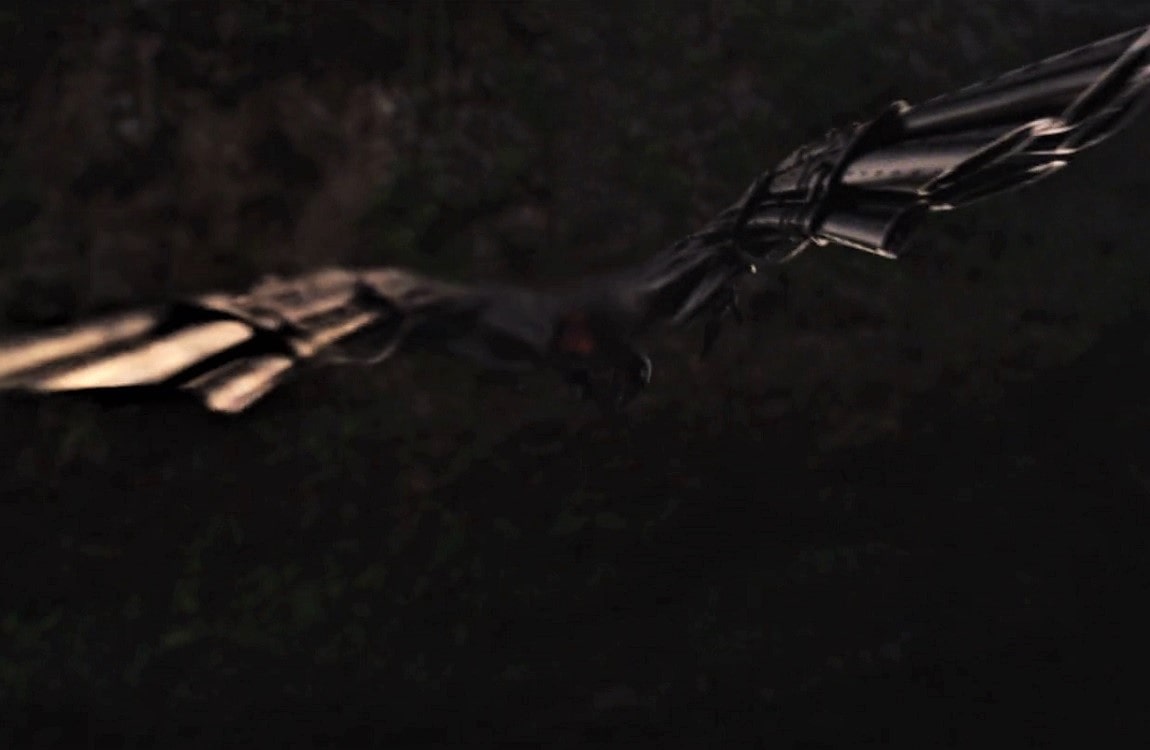 Like modern human armies, the Yautja sometimes employ automated drones to scout their prey. The falcon drone is such a device, used by the Super Predators to track down and spy on the Game Preserve outcasts. Like the Predators themselves, the drone had multiple vision modes suitable for different situations and environments. The drone attached to the shoulder of the Falconer Predator, who also had a link connected with his bio-helmet. The falcon drone was non-lethal and used only for tracking, the killing would be left for the Predators themselves. 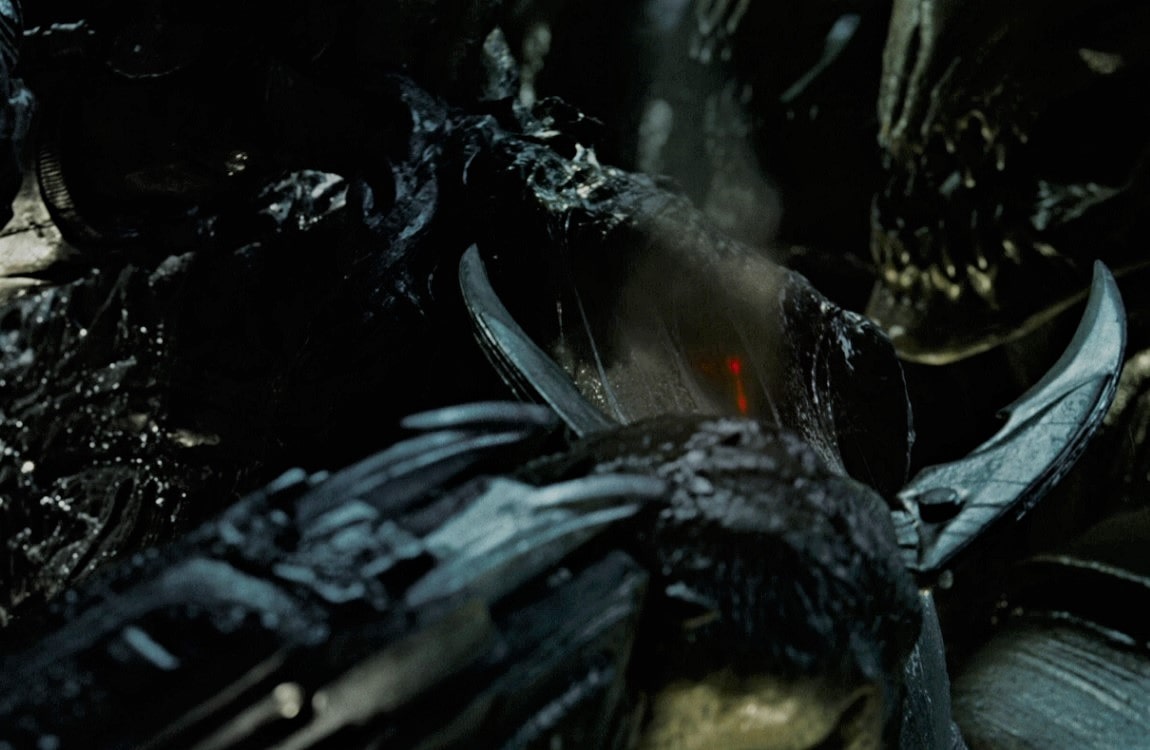 Skinned bodies often show up in the Predator movies, games, and comics but how the process works is almost never shown. In the very dark Aliens vs. Predator: Requiem, a Predator was seen flaying a Xenomorph head with a flaying tool, just before being attacked by the Predalien. The tool looks like a double-bladed knife with a red laser in the middle. The laser possibly neutralizes the Xenomorph acid and helps to remove the Exoskeleton skin from the skull by burning the membrane between the layers. It is unknown if the Yautja use the same tool for flaying humans.

While most Predators wear the medicomp case behind their left shoulder, Wolf Predator had another bigger case behind his right shoulder. This was the cleaner case which included many tools to help him clean up a Xenomorph infestation and remove any evidence of it. First of all, it contained the tracking syringe, which analyzed the DNA of facehuggers to make their tracks visible on the bio-helmed display. The next item was the dissolving liquid, that was a blue substance that melted anything it came into contact with. Wolf melted the bodies of facehugger with this liquid. In addition to some unidentifiable gadgets, the case contained another self-destruct device, to avoid any Predator tech to fall into wrong hands. 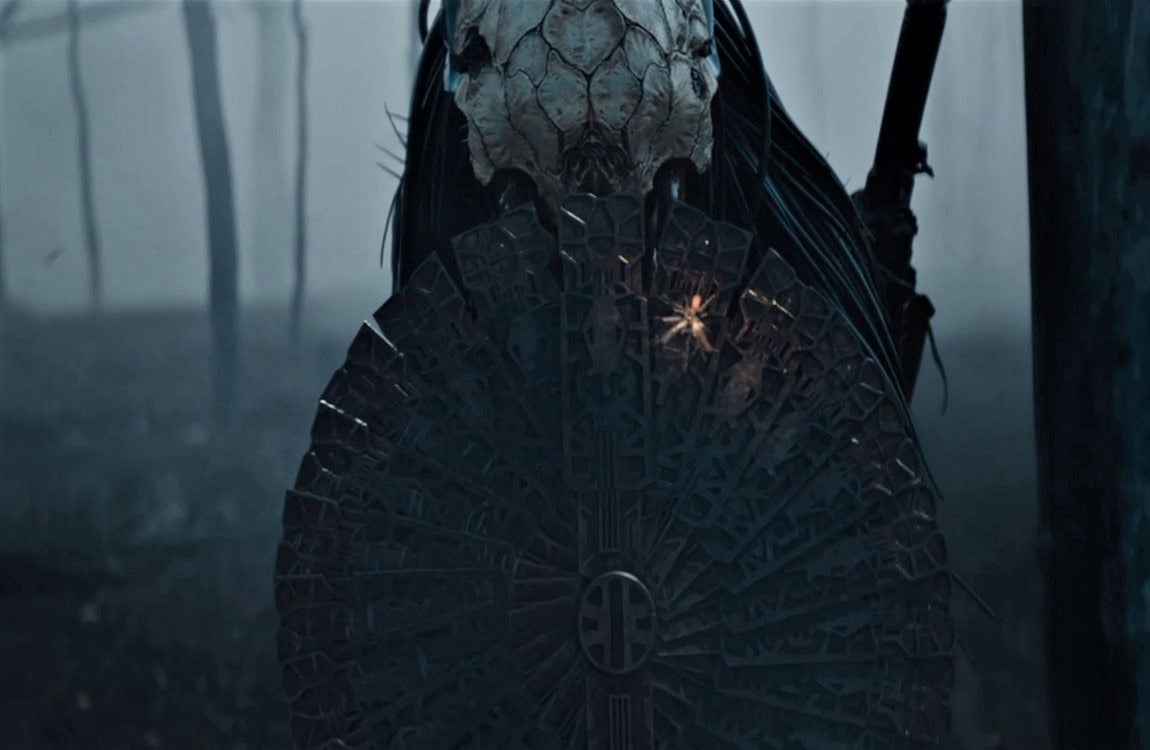 The gauntlet shield is one of the newest types of Predator equipment, used by the Feral Predator in the recent Predator: Prey movie. The shield expands rapidly from the gauntlet like a flower, allowing the Yautja to block incoming projectiles, like bullets. The gauntlet shield covers about half of the Predator's body, leaving the legs still exposed. Most likely the shield also snaps back into the gauntlet in quick order, allowing the Predator to press on with his attack once the incoming volley is blocked. Like all pieces of Predator technology, it is very lightweight and made from an unknown metal. 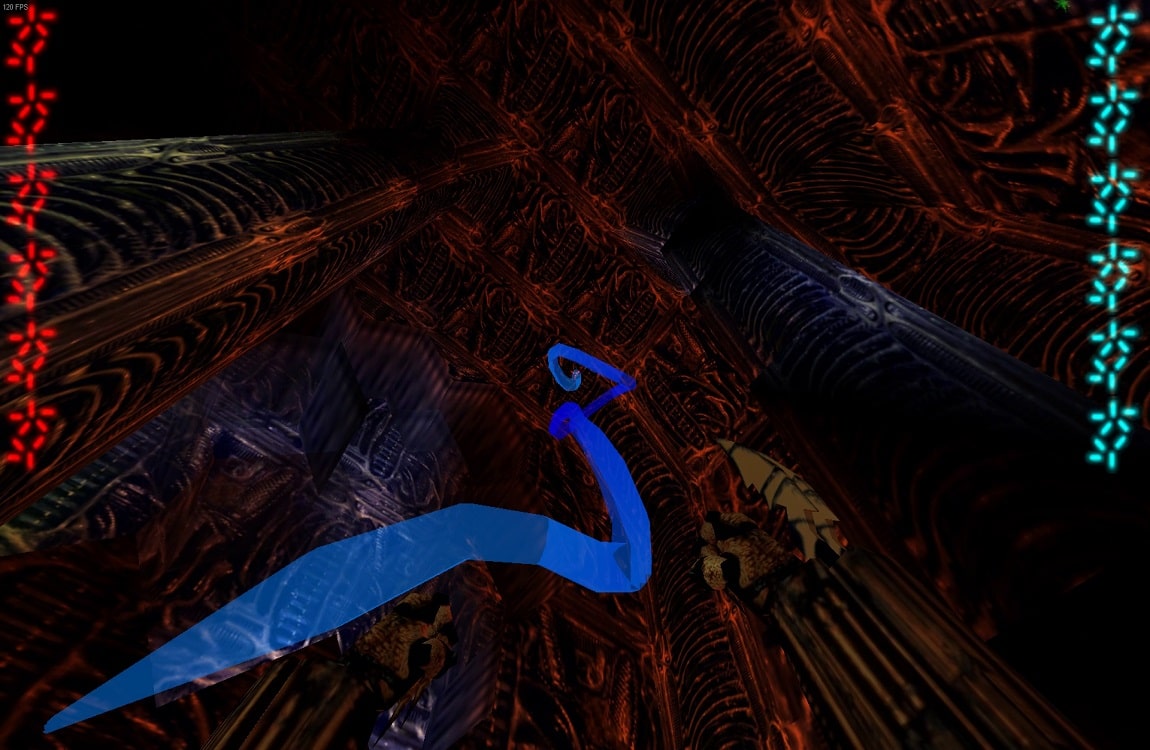 The grappling hook is one of the most unique and exotic Predator tools. Available only in Aliens vs. Predator Classic in certain Predator bonus levels that were originally designed for Xenomorphs. The grappling hook allowed the Predator to rapidly climb to otherwise inaccessible areas, like high ledges. It worked by shooting a blue flexible rope out of the wrist gauntlet which then pulled you in after a few seconds. This also allowed the Predator to dangle in the ceiling and snipe Colonial Marines and Xenomorphs, although the Aliens usually reached the ceiling quite fast.

One might be wondering how the Predator could recharge its tools and weapons in the field and if just waiting long enough would do the job. In Aliens vs. Predator 2, the Yautja had a portable energy shift device, that could replenish all the energy in just a few seconds. This made the Predator almost invincible, as the energy could be then used for the medicomp and quickly replenish both energy and health. The only drawback was that Predator became very slow during the recharge and it had a somewhat blinding effect. AvP 2 was the only game that featured this device, but Aliens vs. Predator Classic had field energy unit pick-ups at random locations on the map that looked somewhat the same as the energy sift device.

Want to know more about the Yautja? Check out the list of the most incompetent Predators and look over the Predator and Viking encounters.