The Colonial Marines use small and mobile units to protect the colonies and wage warfare. These units are the maximum size of a battalion, but usually only a few squads are sent into action. The marines arrive in gigantic ships, which are often fully automated. Here is an overview of different Colonial Marine teams, including the one commanded by Lieutenant Gorman in Aliens. 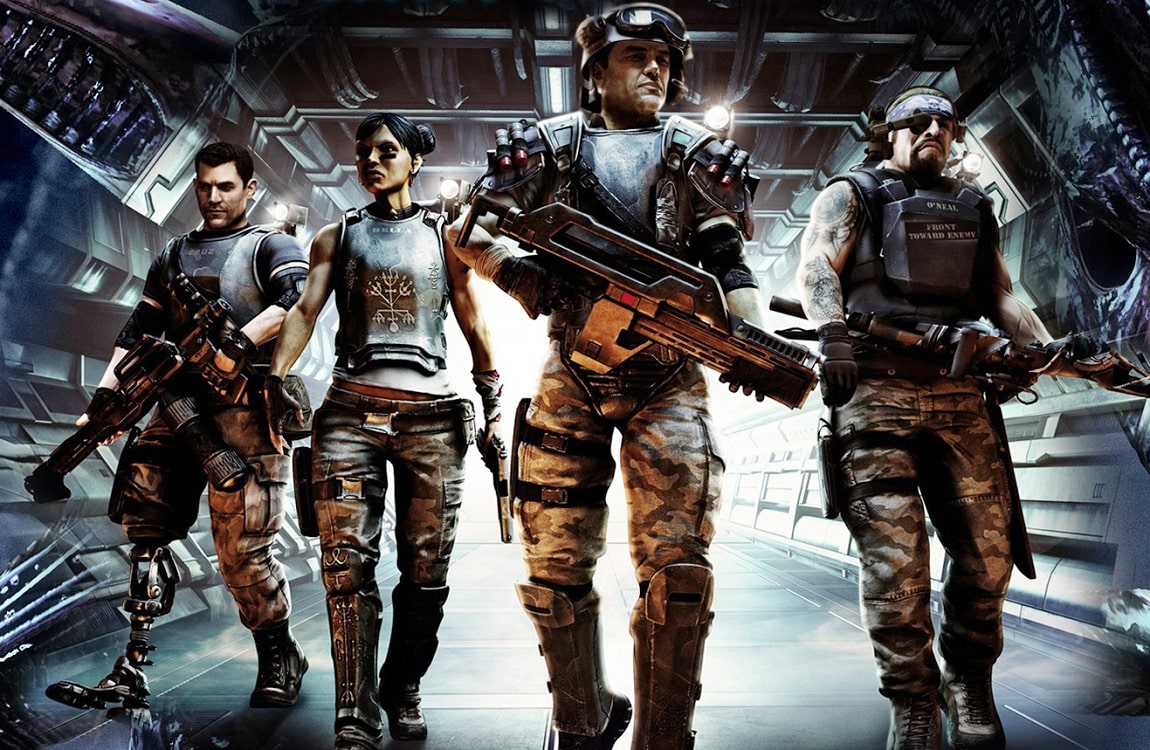 The Colonial Marines from the USS Sephora were from the 118th Battalion and had the complement of about 400 soldiers. In the much-hated Aliens: Colonial Marines video game, the ship was sent to investigate the reappearance of the USS Sulaco in orbit of LV-426 under the command on Captain Jeremy Cruz. In the ensuing battles on board the USS Sulaco and on the surface on LV-426 most of the 400 marines died, either by Xenomorphs or hostile Weyland-Yutani forces. The motto of the 118th Battalion was "Oorah to Ashes" but they often uttered the lines "leave no marines behind". After saving Corporal Hicks from Weyland-Yutani commandos, the surviving marines headed by Corporal Winter left LV-426 in a mysterious FTL ship, breaking their promise to not leave any marines behind. 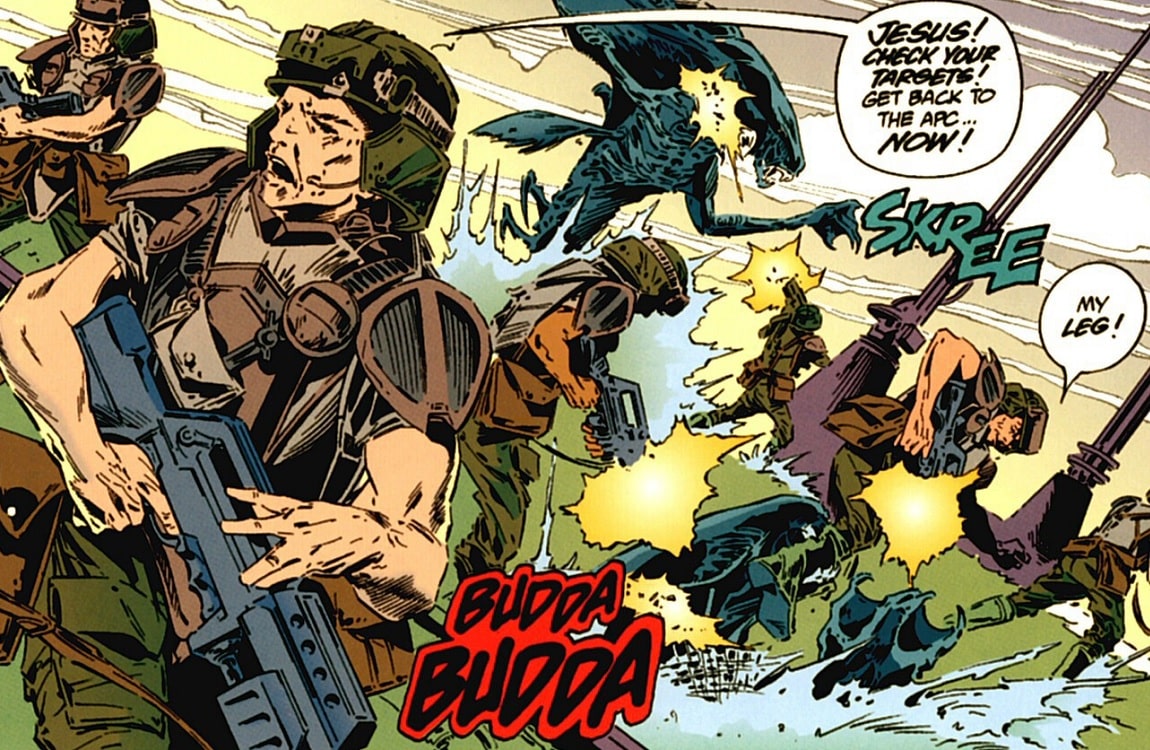 Lt. Henry, a son of a famous politician on Earth, was put in charge of a ragtag platoon of soldiers in the classic Aliens: Colonial Marines comic series. The platoon was stationed on the USS Melville, which also included the sister of Jeanette Vasques from Aliens - Carmen Vasquez. This "Bad batch" of Colonial Marines did some planet-hopping, which included Brackens World, a backwater world with a bad case of aquatic Xenomorph infestation. Lt. Henry's group wasn't very competent - some marines even managed to shoot themselves in the foot. Their adventures were cut short, as the originally planned 12-part series was wrapped up in 10 issues. The whole group was wiped out when the Alphatech research station exploded, taking out all the Xenomorphs and Bug Men as well. 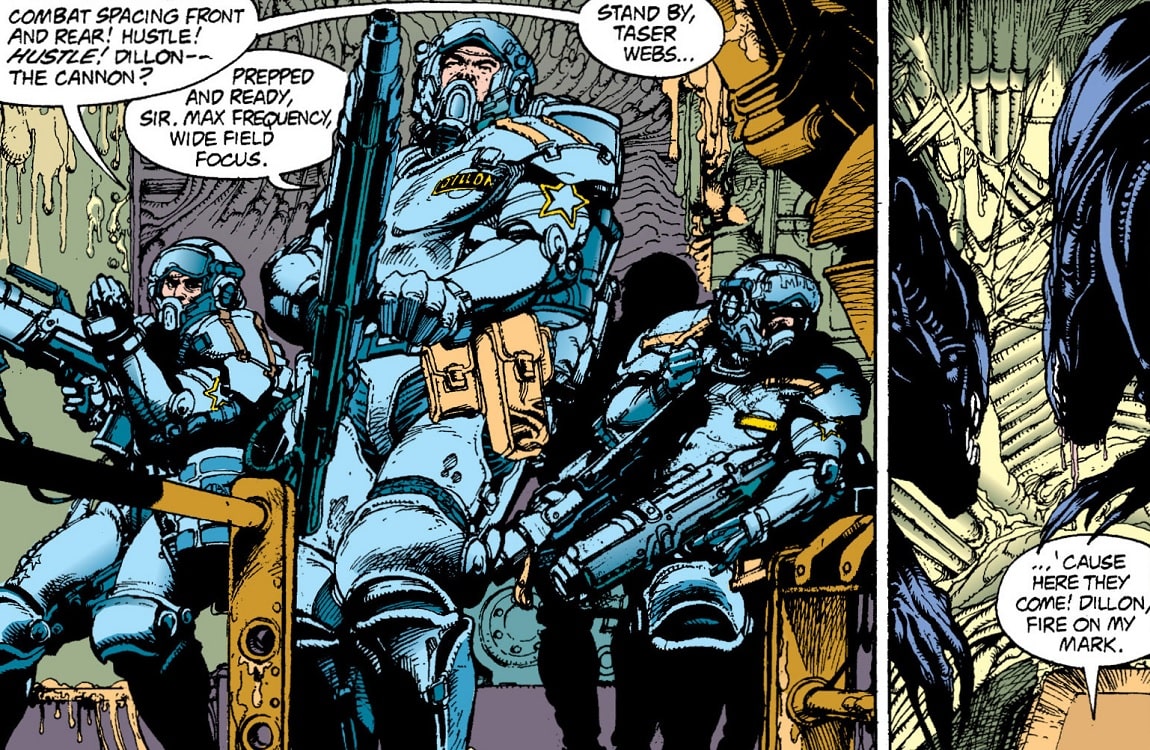 Not all Colonial Marines were stationed on warships, some were ordered to less spectacular guard duty. Such was the case with the marines on Charon Base, a research station on a remote asteroid owned by the Z.C.T. Corporation. Although the corporation owned its own private security force, the marines headed by Sargent Green worked under contract and had to take commands from Dr. Ernst Kleist. When the marines discovered too much about the shady dealings of the mad doctor, they were betrayed and banished to a remote part of an Alien hive. Depending on which version of Aliens: Rogue to read (book vs. comic), most of the marines either survived or only Sargent Green made it out alive. In the book, the marines were much more competent. 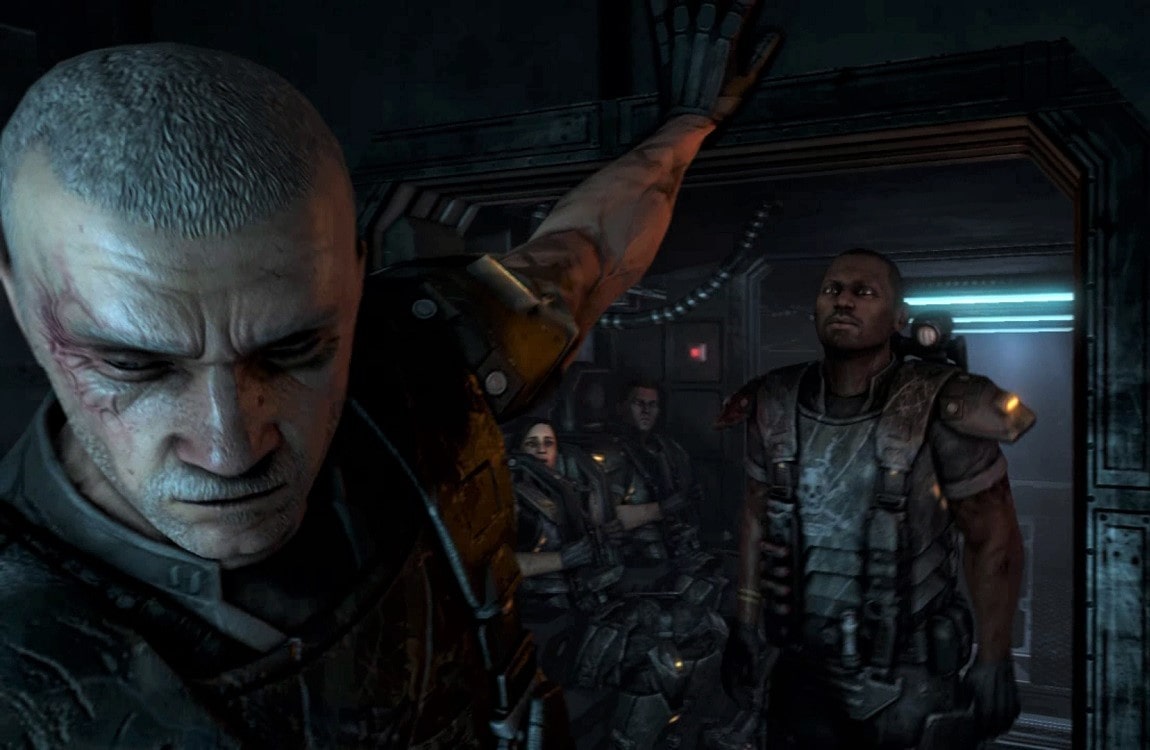 When the Colonial Marines arrived on BG-386 to answer a distress call in Aliens vs. Predator 2010, their ship (the USS Marlow) was immediately blown up by a cloaked Predator mother ship. Fortunately, a few dropships escaped from the blast and landed safely on the planet. The marines continued to struggle on the planet against Xenomorphs and Predators, even losing their commander, major Van Zandt, to a facehugger and resulting chestburster. Other marines, including Private "Rookie" and Corporal Tequila, had more success and managed to take down hordes of Xenomorphs, even killing a few Predators and Weyland-Yutani commandos. In the end, the two marines escaped the planet on a Weyland-Yutani ship, carrying Karl Bishop Weyland's datapad with the location of the Xenomorph homeworld. 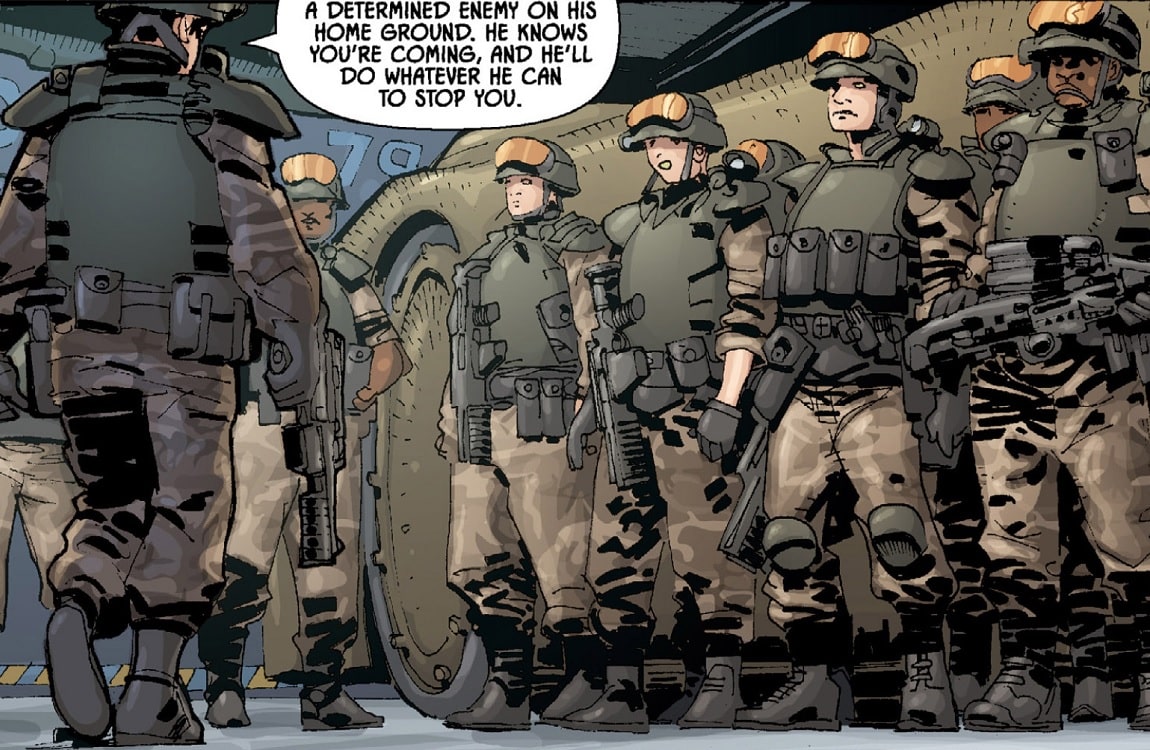 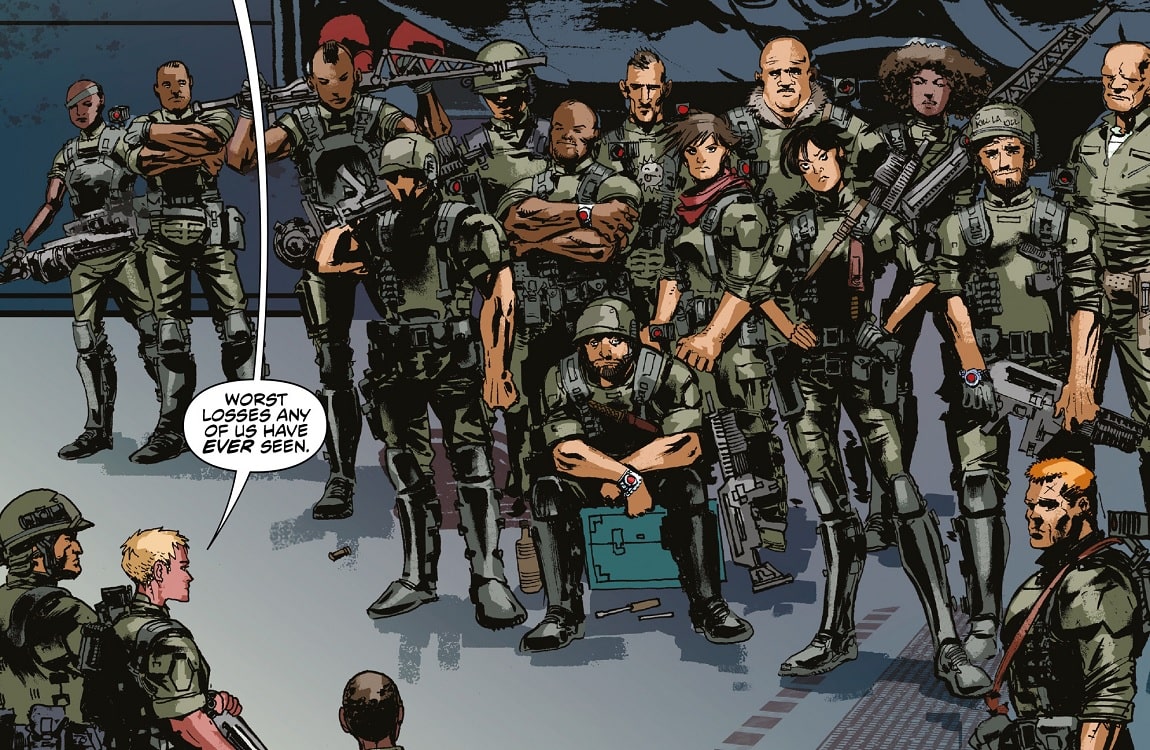 One of the most recent Colonial Marine teams in the Alien lore were the soldiers from the USS Hasdrubal in the epic Life and Death comic saga. The team consisted of 33 marines and was commanded by Captain Paget. The USS Hasdrubal was sent to LV-797 where the marines encountered a clan of aggressive Predators, which wiped out several of their members while inflicting losses on the Yautja as well. They were then rerouted to LV-233 (the planet from Prometheus) where they teamed up with Ahab Predator to battle both Engineers and Xenomorphs. The USS Hasdrubal marines had a competent commander and gave their best in the fight, however, they were quite overwhelmed and suffered terrible losses, with only about half a dozen marines surviving in the end. 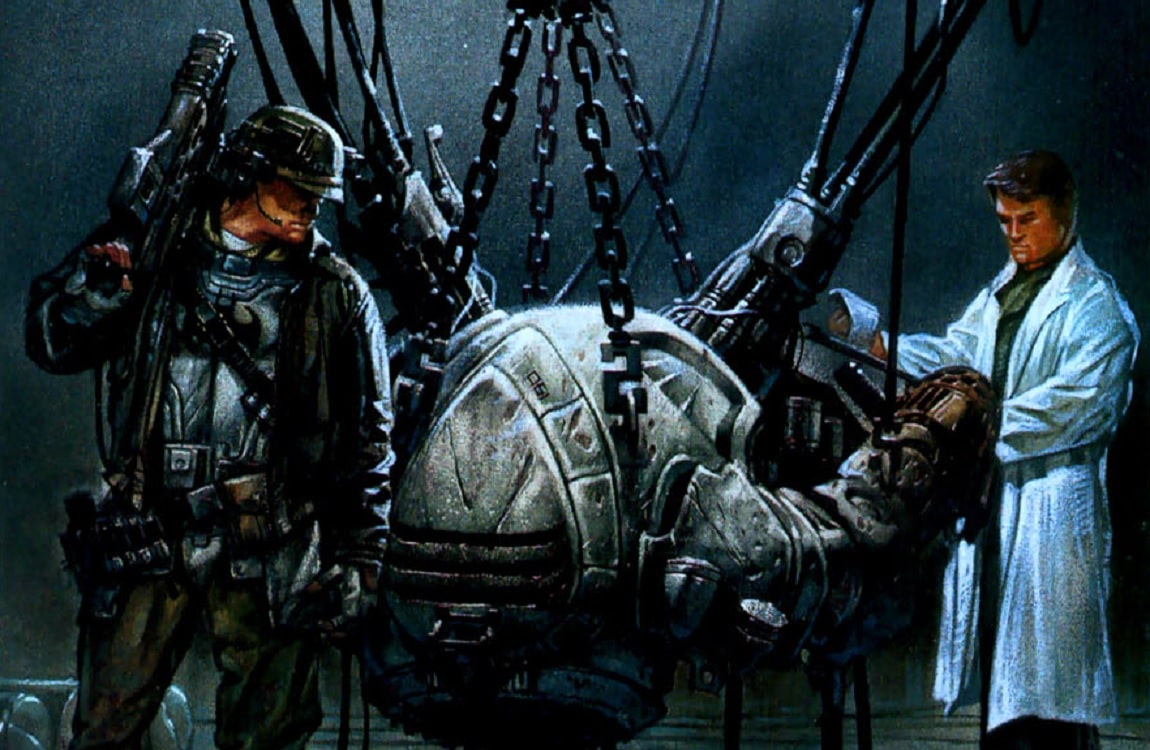 The Colonial Marine Berserker team from Aliens: Tribes employed the MOX (Mobile Offensive ExoWarrior) power suit - a heavily armored and armed mech suit with an enclosed person inside. In combat, the person was injected with stimulants to make his reflexes and senses to be hyper-alert. Other members of the team included hardened convicts who had volunteered to reduce their sentences. The team often let one of their own be captured by Xenomorphs and taken deep into an alien hive. The armored suit would then follow his signal and get close to the Queen and her eggs. Private Shitkicker, a member of the MOX team, successfully killed the Xenomorph Queen on TodLab LXI this way. However, Shitkicker had an overdose of stimulants and his rampage ended with the total destruction of the station. 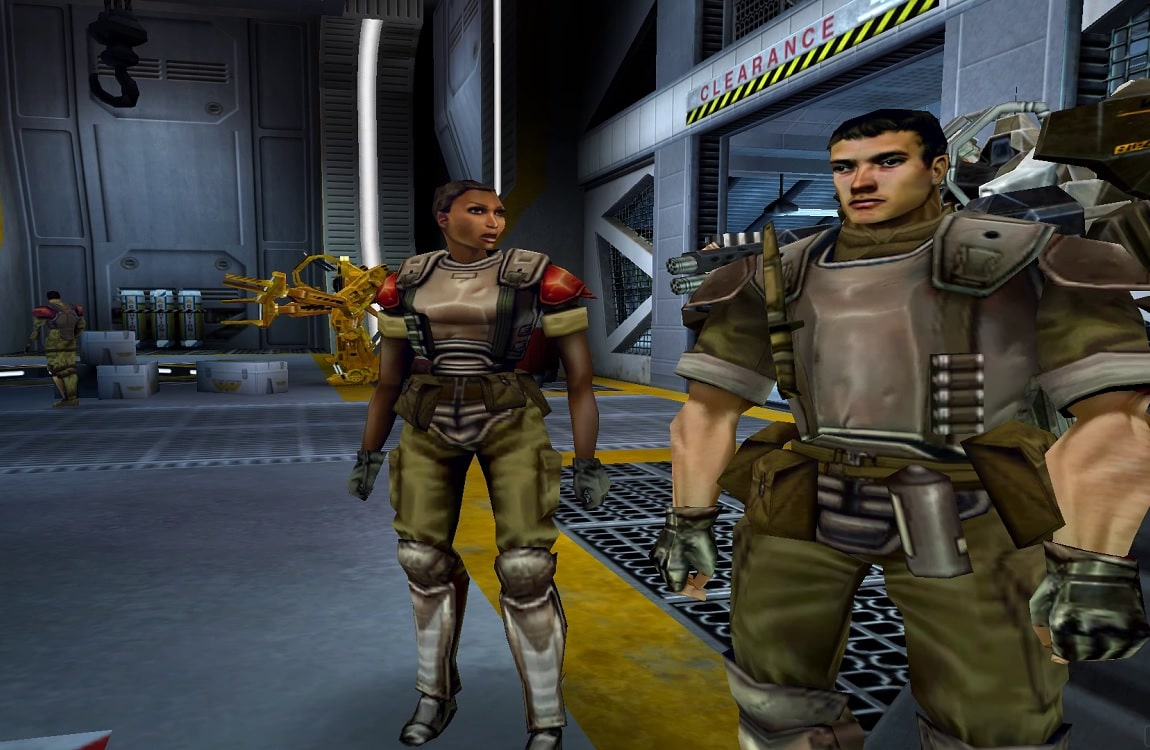 From the Alien and Aliens vs. Predator games, the Colonial Marines from the USS Verloc were probably the most successful. In line with the Colonial Marine doctrine, they had a relatively small team, consisting of about two dozen soldiers and a few dropships. Similar to other games, they had a standout hero in the form of Corporal Harrison who did most of the grunt work. However, the other marines did not just stand around and die. They did their share of Xenomorph killing and most even made it off the planet, including their commander - Major McCain. Furthermore, even the USS Verloc survived intact and was ready for more missions, which unfortunately never came. 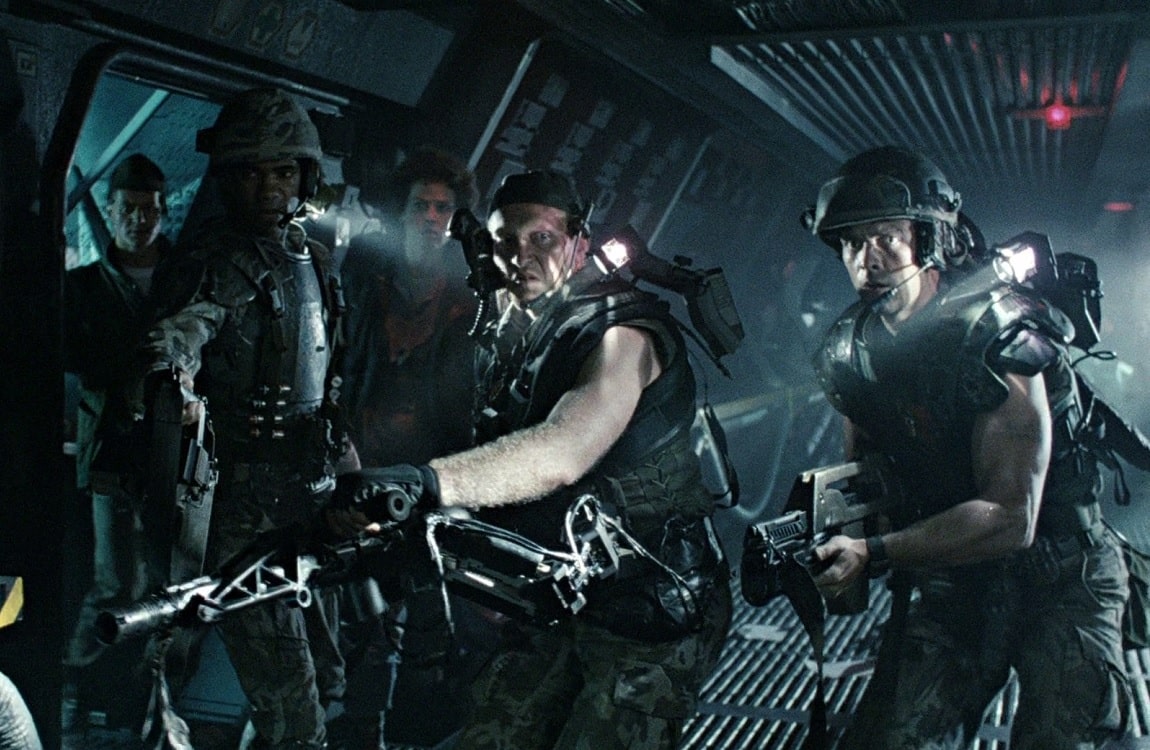 The Colonial Marines from the USS Sulaco were experienced bug hunters even before the events of Aliens, as hinted by Hudson and Hicks. The exploits of most of the members of the team were described in the book Aliens: Bug Hunt, including fighting light-sensitive and flesh-eating insects. The mission to LV-426 would have gone better with a more competent commander, as Gorman was an inexperienced officer straight out of school. Besides the fact of most of the marines were killed, Hicks and Bishop managed to survive, although in a wounded state. Furthermore, the Aliens: Space Marines comics by Kenner feature an alternate reality of all the main marines surviving and forming a group of Alien killers, this time headed by Ellen Ripley. 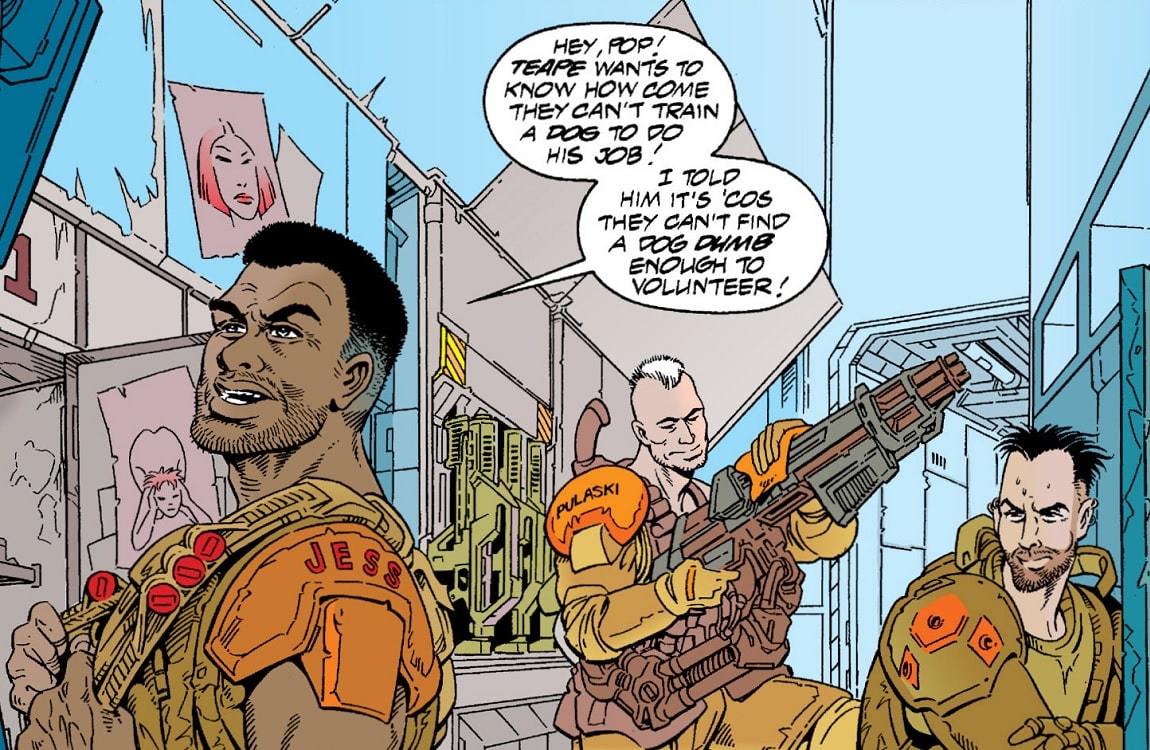 The Berserker MAX unit was the second known Colonial Marine Berserker team and probably the most successful one as well. On one of its last missions in Aliens: Frenzy, the MAX unit was sent to DS-949, a space station with about a thousand Xenomorphs. When they discovered that Weyland-Yutani was behind the infestation, their commander turned against them, and about half of the team was killed. Soon after, DS-949 was rightfully destroyed, but so was the Nemesis. The survivors - Lara, Jess, and Ellis made it out on a dropship and had further adventures in the Aliens vs. Predator: War comic. This time, the MAX suit was deployed not only against the Xenomorphs, but the Yautja as well. Joining up with Machiko Noguchi, they headed back to Earth.