The Colonial Marines vs. Alien Queen fights only happen in the Alien games and comics, where usually a small group of Marines battles a single Alien Queen and defeats her. In the games, the Alien Queens are used as boss fights, often appearing at the end of the game and requiring puzzle solving as well. In only a few cases, the Queen manages to survive and fight another day.

Much like the game itself, the final level of Aliens: Colonial Marines was lackluster. After crashing into a Weyland-Yutani FTL ship with a dropship, Corporal Winter encountered the second LV-426 Queen in the hangar. All other marines accompanying him (including the resurrected Corporal Hicks) hightailed it out of the hanger and left Winter alone in the fight. Shooting the Queen had to effect, although incendiary grenades put her on fire for a short while. Fortunately for him, Whiter only had to pull 5 switches in short order to jettison the Queen with a catapult mechanism. As the Queen still hanged on, Captain Cruz then flew the dropship into the Queen, killing both himself and the big Alien when they crashed back to the planet. 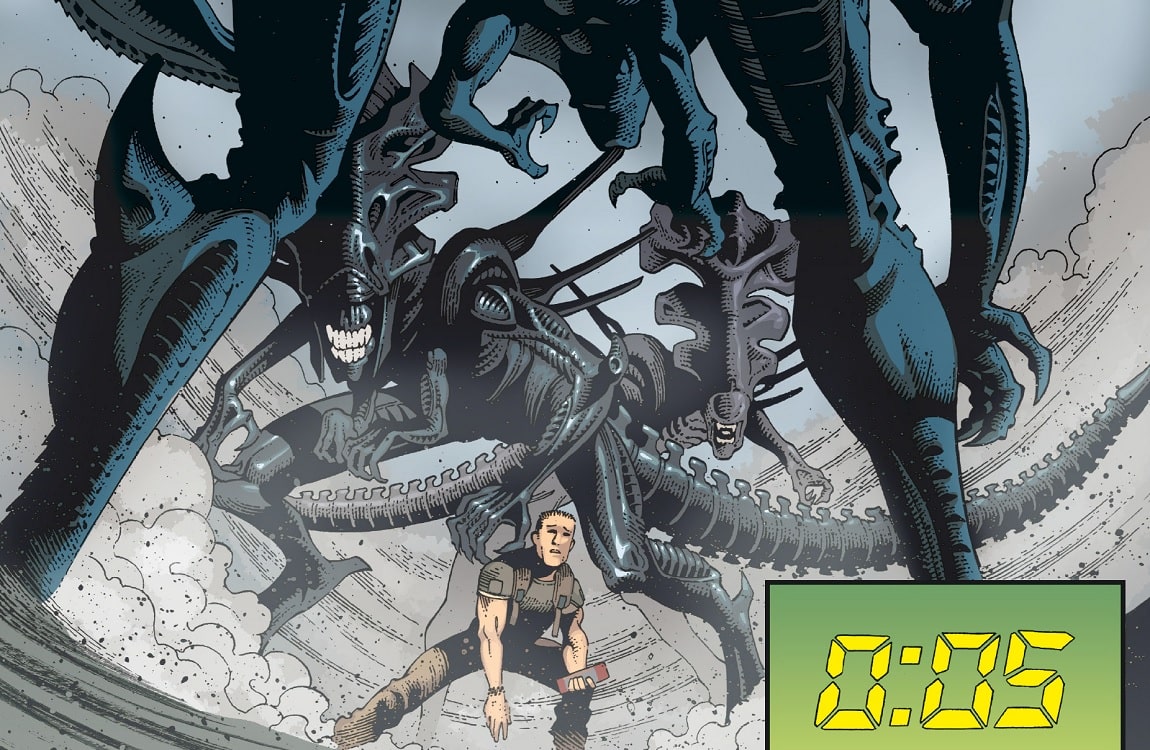 The Colonial Marines from Aliens: Rescue led by Zula Hendricks and Amanda Ripley had the unique challenge of facing three Alien Queens at once. These Queens were possibly born from the same victim, as depicted in Aliens: Resistance. They had a unique bond from the start and created their hive together as well. One of the marines named Brand placed seismic charges around the cave in the hive and set a timer while Zula distracted the Aliens together with the other marines. Miraculously, the marines made it out in the last second and even Brand managed to climb out of the collapsed rubble alive. 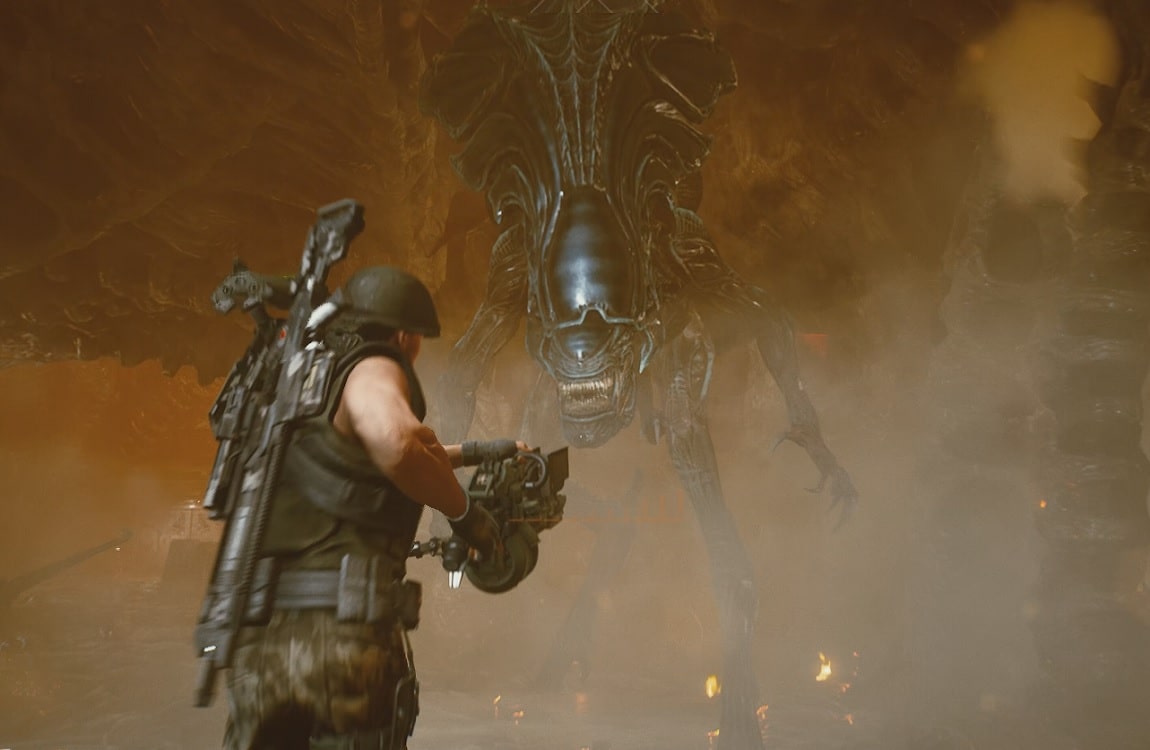 Like the fight from Aliens: Colonial Marines, the final battle of Aliens: Fireteam Elite is a disappointment, although a bit better. The Katanga Refinery was heavily infested by Xenomorphs and a three-member fireteam from the USS Endeavour was sent to trigger a self-destruct from the inside, by lowering the coolant and turning on all the power levels. After mowing down hordes of Xenomorphs, which the game handles great, an Alien Queen appeared. However, it was more like a set dressing and could not be killed by normal weapons. It also followed a scripted path, sticking her head out of pre-defined holes of the refinery. Before the self-destruct timer ticked to zero, the marines reached an elevator and evacuated, leaving the Queen to die in a fiery explosion. As the game has no cutscenes, this was never to be seen.

In Alien vs. Predator: Three World War, the Colonial Marines joined forces with the Jungle Hunter Predator clan to fight against the Killer Predators who had gained control over a breed of tusked Xenomorphs. For that, they had to capture the Ryushi Queen, a new Queen that had emerged on the planet after Maghiko Noguchi had killed the first one together with Dachande. Capturing the Queen wasn't easy and many marines and Yautja perished. However, this is one of the very few fights in the series where the Alien Queen manages to survive. The big Xenomorph was then released on the planet Caparis VII and regained control of the tusked Xenomorph breed and leading to the defeat of the Killer Predators. 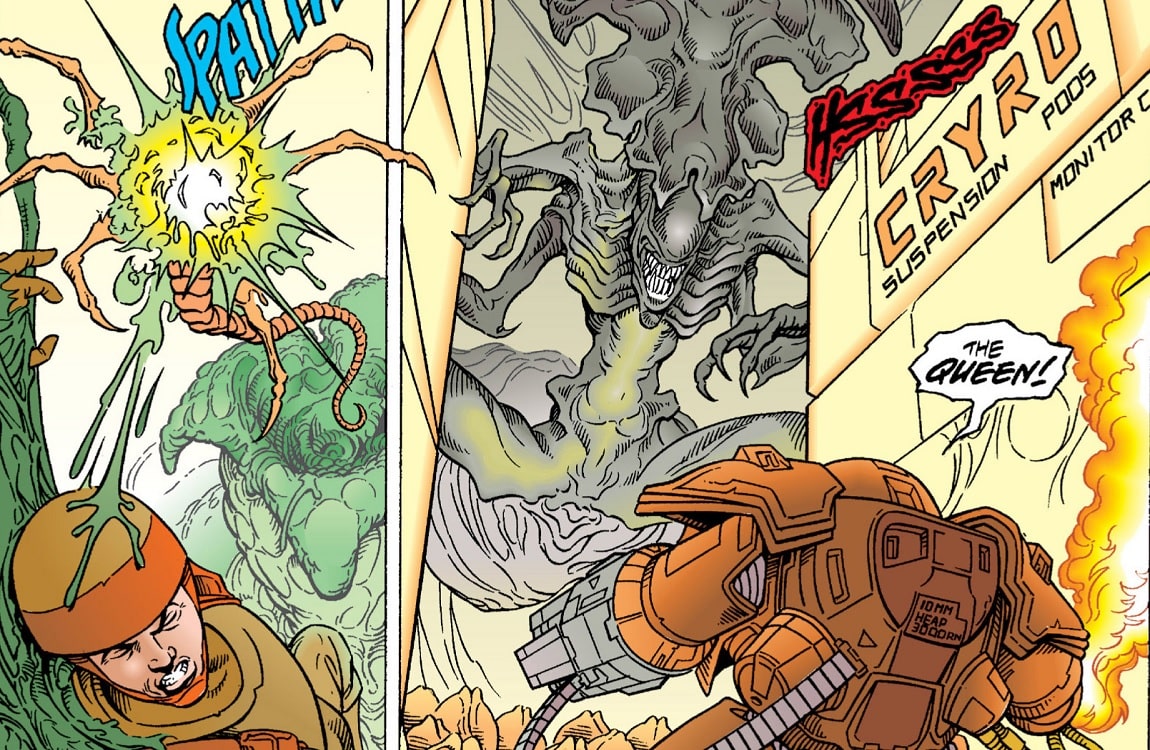 After the Alien-Earth War, the Berserker Squads were introduced, specializing in taking down Alien hives and killing their Queens. One such squad landed DS Service Terminal 949, containing one of the largest Alien hives ever. The point man of the squad let himself be captured and carried to the egg chamber. The MAX armor then homed into that location, killing everything in its way, including the Queen. In a surprising twist on events, the DS 949 contained a Weyland-Yutani ship where the original infestation had spread from. Private Ellis took over the command of the MAX suit and lead another assault into the ship, killing a second Queen inside with its hand-mounted minigun.

Rookie vs. The Matriarch 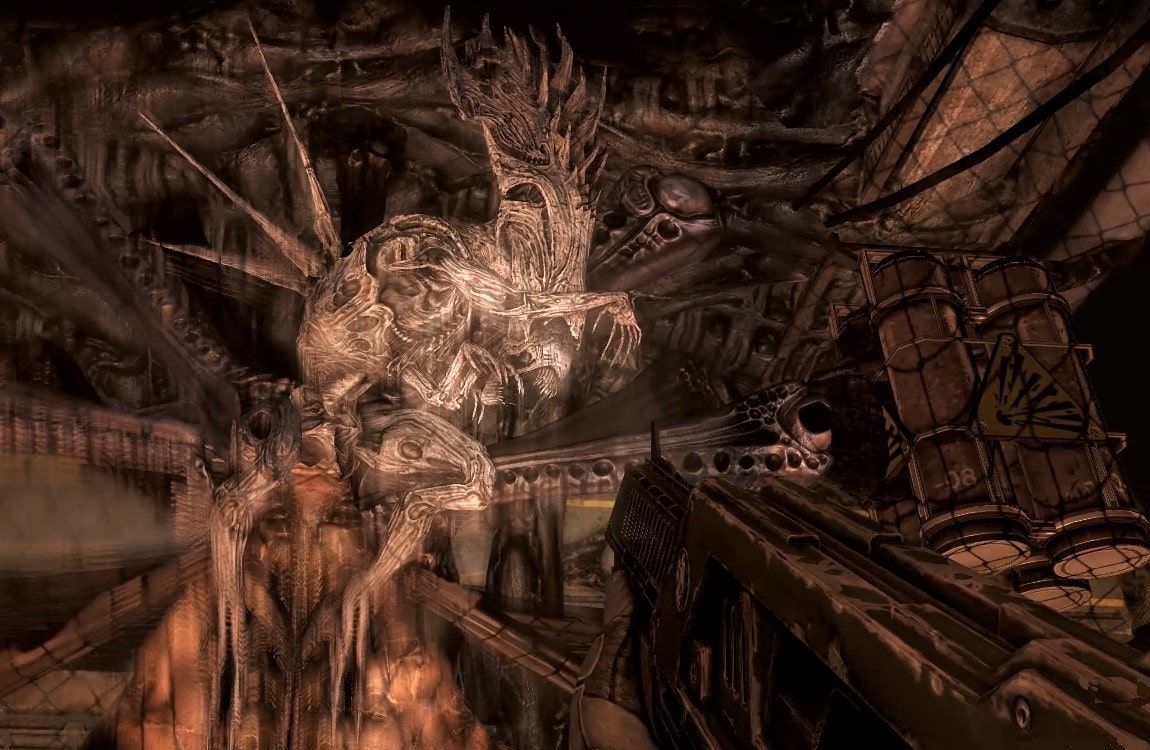 Contrary to other Alien games, the Private Rookie vs. Matriarch fight from Aliens vs. Predator 2010 was in the middle of the game, not as a final boss. Furthermore, the Queen was immobile, sitting attached to her egg sack and producing new eggs while commanding her Xenomorph warriors. Perhaps the Queen was so old that she had become too tired to move. Conveniently, she was sitting inside the refinery next to big explosive barrels. All Rookie had to do was shoot these and burn her, while fighting the facehuggers and Xenomorphs at the front.

General Spears vs. The Third Base Queen

General Thomas Spears did not plan on battling the Alien Queen he had bred, engineered to be under his control, and brought to Earth from his secret base. He wanted the Queen to help him reclaim Earth from the Xenomorph infestation that was already raging there, an aftermath of the Alien-Earth War. As soon as they landed on Earth, the Queen disobeyed him and had her warriors attack the General. Spears fought back with his sword and flamethrower. The Queen then headbit Spears through the forehead and at the same time was torched with the flamethrower. Distinct from the others, this fight had no clear winner as both combatants died in a deadly and burning embrace. 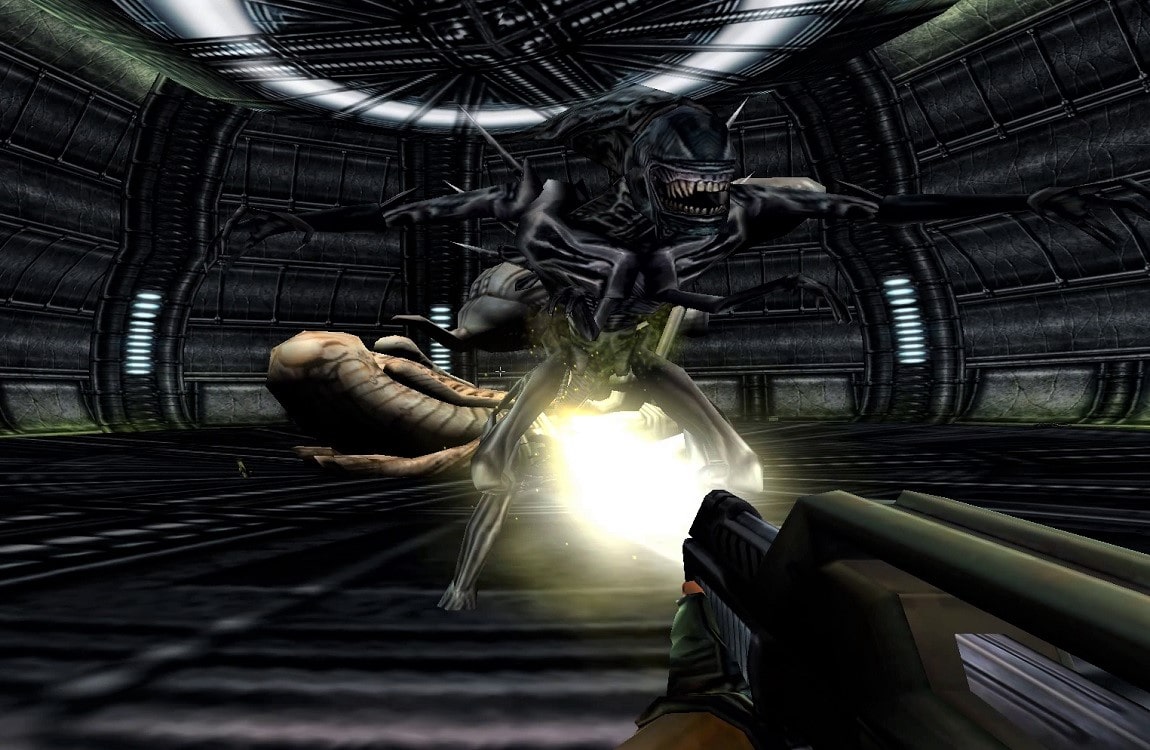 The Xenomorph Queen at the end of the epic Aliens vs. Predator 2 Colonial Marine game could be refreshingly gunned down by conventional weapons. The best tool for this was the minigun that Corporal Andrew Harrison could pick up next to the dead Space Jockey sitting in the center of the chamber. The LV-1201 Queen was perhaps the fastest of all the Xenomorph Queens in the Alien games and gets in the player's face. However, she did not do a lot of damage and could be circled around. It is interesting to note that killing the Queen triggers Praetorian guards to chase Harrison to the dropship which did not show up earlier to defend their Queen. 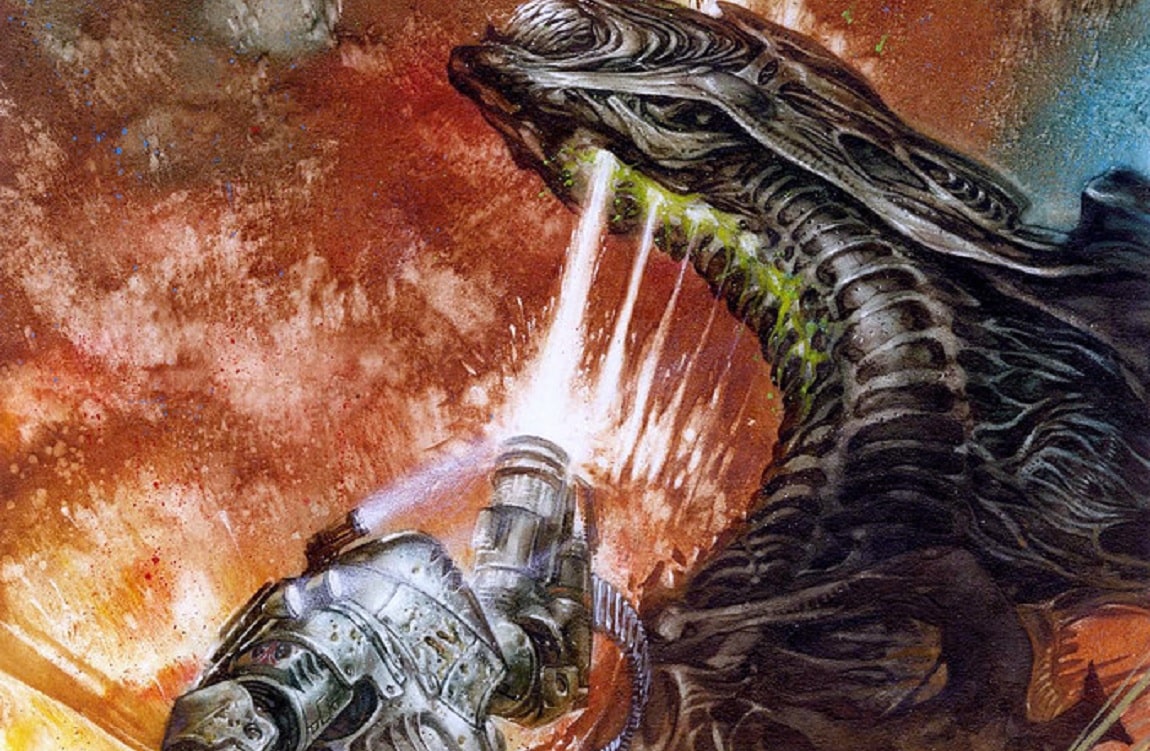 The underrated Aliens: Tribes offered an iconic scene of a Colonial Marine in MOX 16 power armor taking down a Xenomorph Queen. On a routine Berserker Squad rescue mission on TodLab LXI, Private Shitkicker was so spliced up on drugs (injected automatically by the armored suit) that he went into a blind rage. This was beneficial at first, as he mowed down waves of Aliens and reached the Alien Queen, shooting her through the head in quick order. The Xenomorph warriors then swarmed to their queen, in a sad scene where they seemingly try to lift her corpse from the ground. This didn't end Shitkicker's rampage, as he continued to destroy the station from the inside out, killing himself in the process. 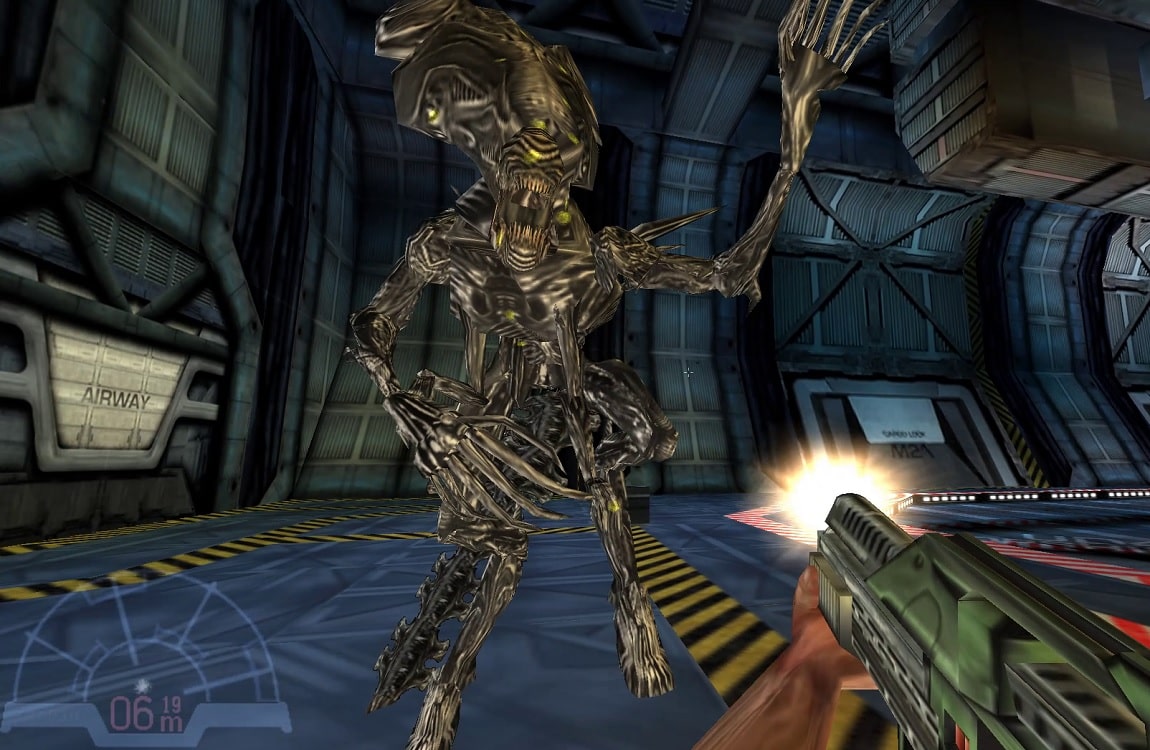 The fight between Private Anderson and the Alien Queen in the hangar of the USS Tyrargo is a memorable one and heavily resembles the end of Aliens. This was the final level of the Colonial Marine campaign and Anderson stumbled in the hangar after it had reported extensive damage to the ship's infrastructure. The Queen hurled boxes at the marine and the player could shoot her in the face with a Pulse Rifle, creating small acid dripping holes. Unfortunately, it was impossible to take down the Queen with normal weapons without using a cheat code. To defeat the Queen, Anderson had to override the safeties of the inner and outer airlock (by shooting some cables underneath the floor). He then enclosed himself in a small compartment with a glass window and jettisoned the Queen, triggering the ending cutscene.