The mysterious Black Goo pathogen first seen in Prometheus reacts in unpredictable and violent ways with different organisms, producing wild mutations and new creatures. Here is an overview of these different mutations, including a mutated Predator and even a mutated Android. 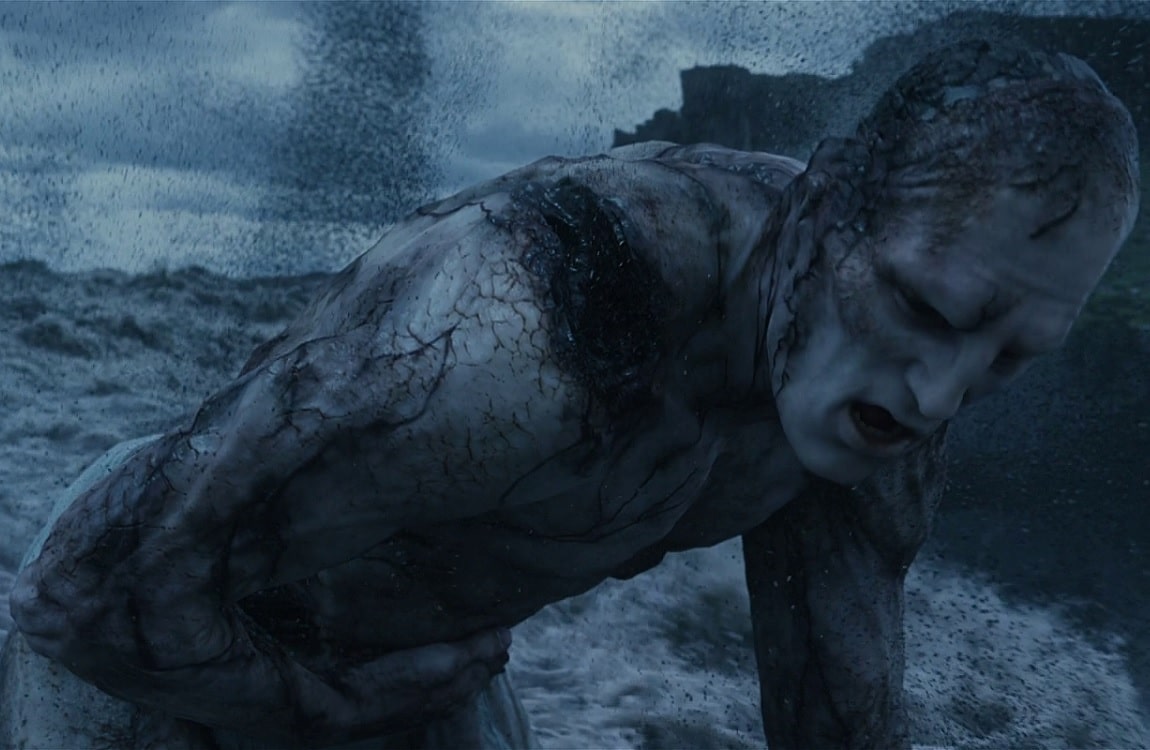 The Black Goo Pathogen had different effects on the Engineers based on what was shown in Prometheus and Alien: Covenant. In the first movie, the Sacrificial Engineer drank a drop of the pathogen and quickly began to dissolve, falling into the waters of a river and causing new life to emerge, either immediately or during a longer period. The planet this happened on was presumably Earth, so the Engineers seeded new life with the Pathogen. In Alien: Covenant, David unleashed a big payload of the Black Goo Pathogen on an Engineer city. As in Prometheus, the Engineers dissolved, but perhaps in a more violent way. The pathogen presumably also wiped out all wildlife on the planet and was meant to be used as a weapon. 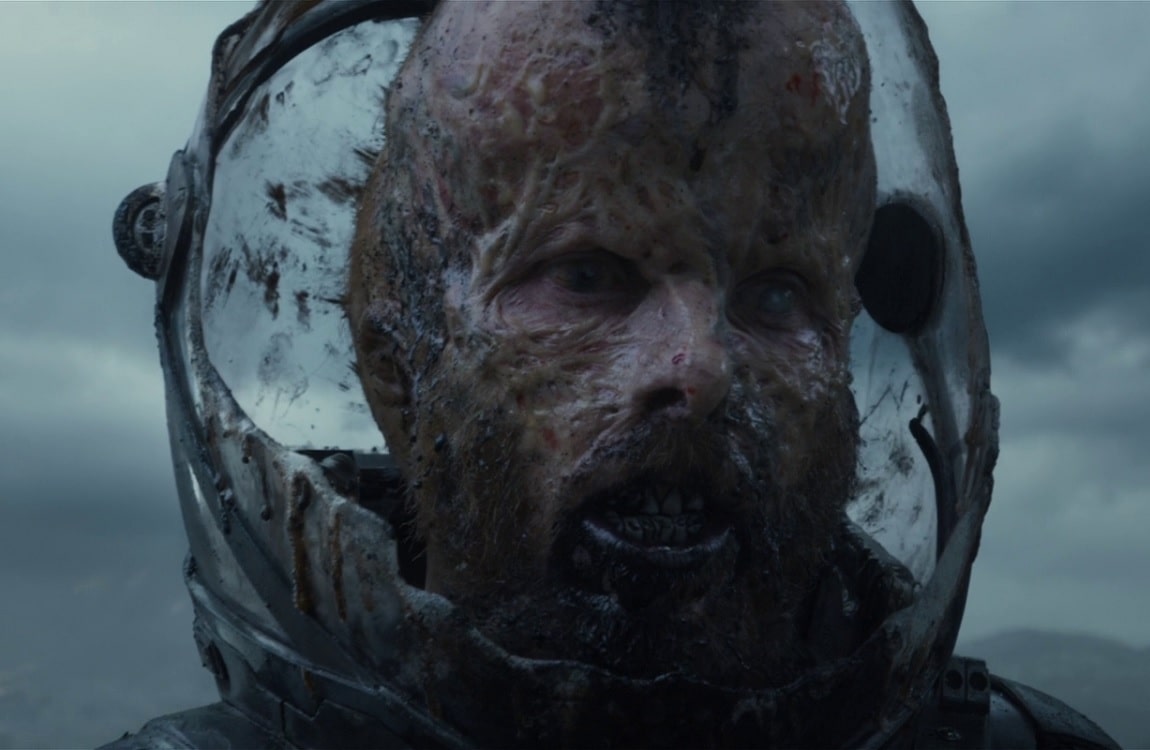 The Black Goo had various effects on humans as well, but presumably due to the amount of the pathogen the human was exposed to. Charlie Holloway was exposed to just a drop and took about a day to show serious symptoms, including growing small worms in the eyes. Still, he regained his humanity until the end and was content being burned alive by a flamethrower. Fifield the "geologist" dived head first in the pathogen and started mutating faster than Holloway. His head elongated and he turned into a mindless zombie, attacking the crew of the Prometheus soon after. Again, the threat was removed by using a flamethrower. 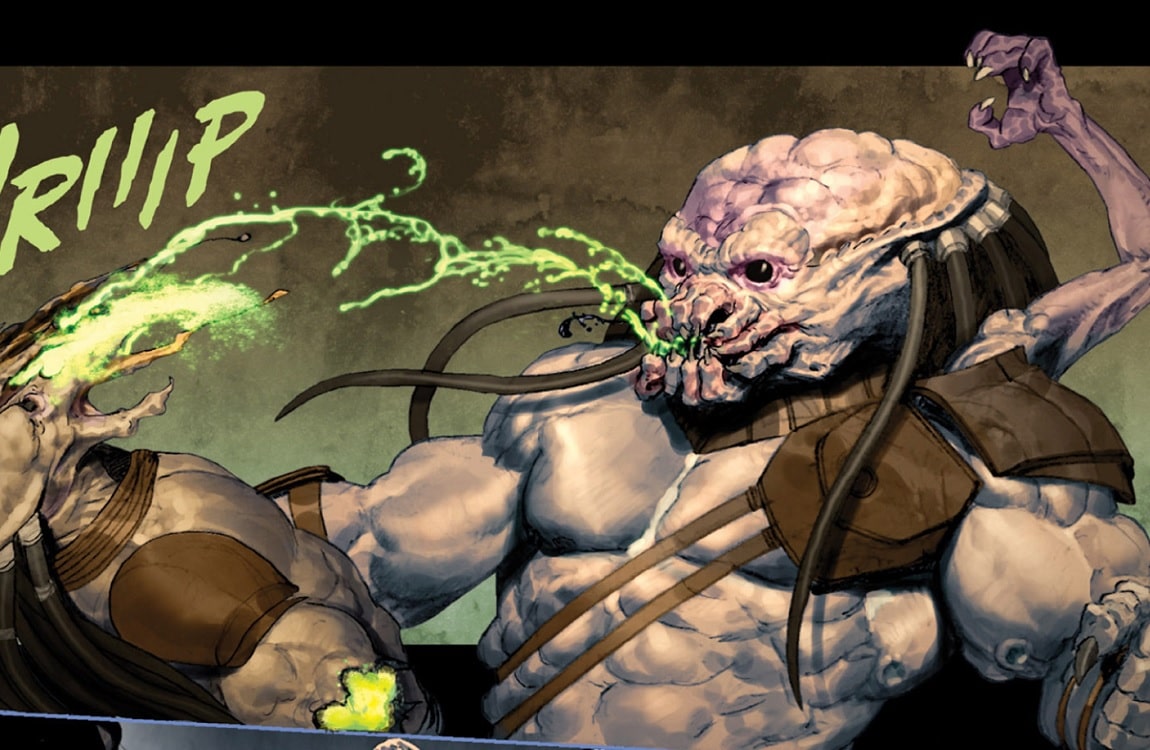 The Fire and Stone comic series answered the interesting question of what would happen to a Predator if it was infected with the Black Goo. In a big brawl of Predators and Xenomorphs on a spaceship, a Predator hunter was bitten in the arm by the Black Goo infested android Elden. He then retreated from the battle and started to transform in few minutes. The mutated Predator expanded in size, grew a new arm on his shoulder and doubled the amount of tusks in his mouth. Like an infected human, he became a mindless zombie with enhanced strength, attacking anything in sight, including his own comrades. The crazed Yautja was finally taken down by Elden. 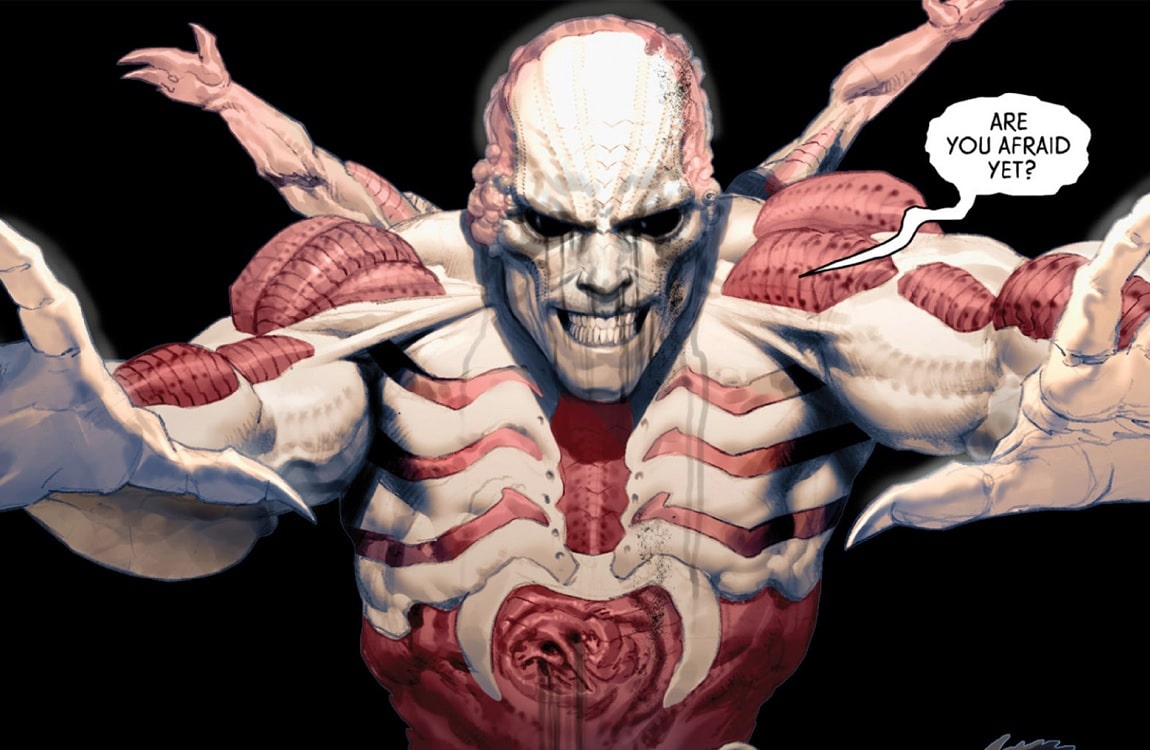 In Prometheus, it seemed that the Black Goo would not react with androids as was the case with David who held a drop of Black Goo on his finger. However, this was not the case in Fire and Stone, which featured a fully mutated android named Elden. Elden was injected by the Black Goo into his arm by a fellow scientist who wanted to test the effects and the possibility of the pathogen curing cancer. Elden started changing immediately and went through several stages of mutations, having his skin turning white with red stripes and growing two extra arms on the back. He seemed to retain most of his consciousness but he became more violent and cynical in the process. After feeling betrayed by humans, he found new companions in Xenomorphs, who did not attack him and even followed him around. During his misadventures, he even became blooded by the Predators. 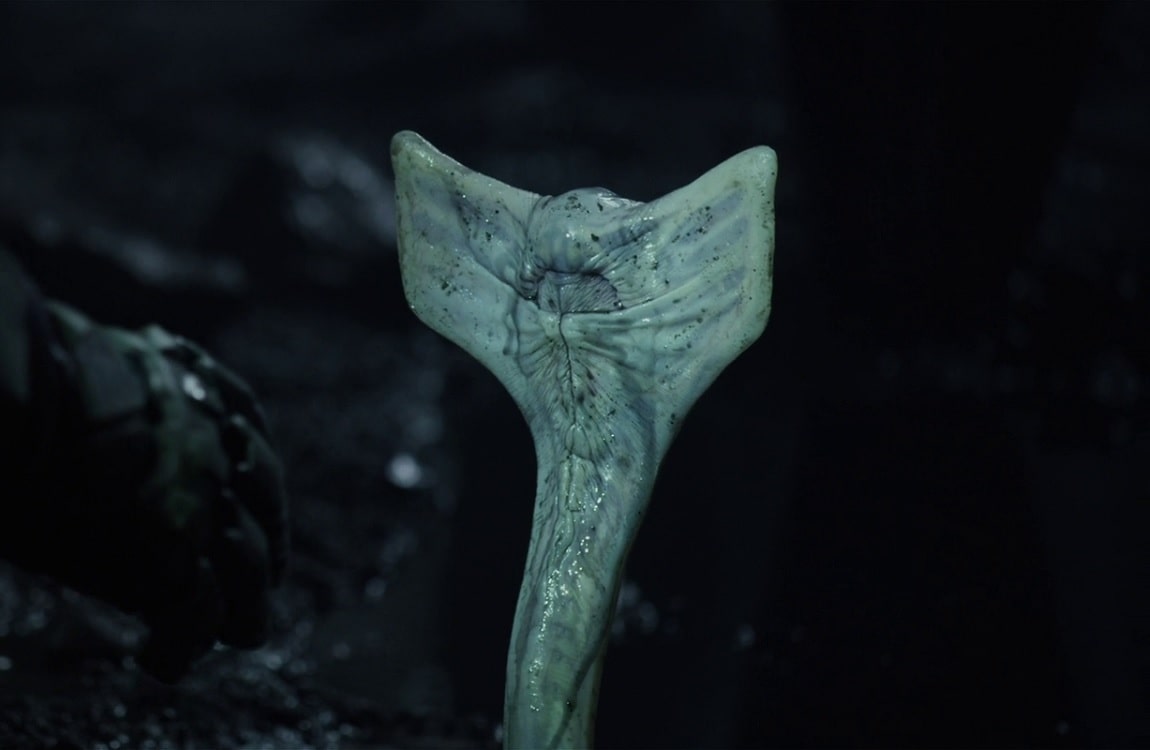 As the Black Goo seems to transform everything it touches, the Hammerpede worm from Prometheus was most likely the result of another mutation. It is possible that the small worms from the feet of the crew of the Prometheus were transferred to the ampule chamber and reacted to the pathogen that was leaked from the canisters. The resulting creature was kind of a prototype facehugger, with white skin and acid for blood. It had good reason to attack Milburn due to his stupidity and force itself inside his mouth. However, this did not cause a new creature to be born as one might expect. 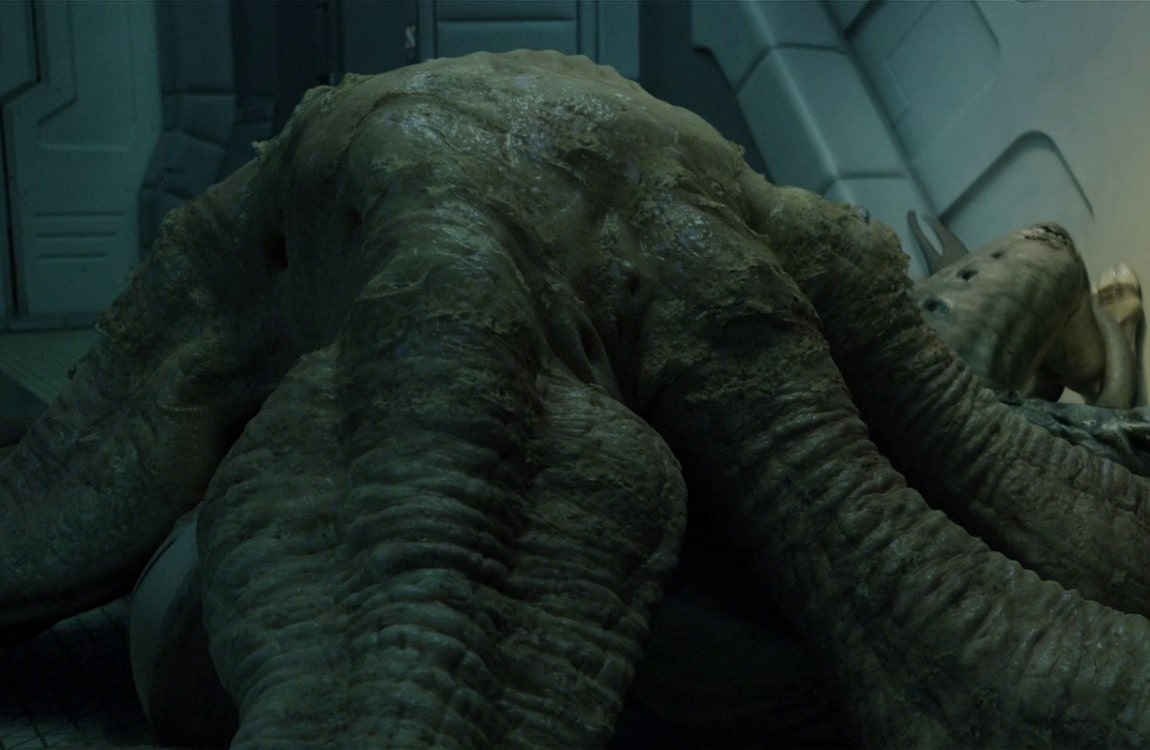 The Trilobite and the Deacon probably had the most complex life cycle in the Alien franchise, which started out with the Black Goo. As mentioned, Charlie Halloway was infected by a drop of the Black Goo by David to experiment on its effects. He then had sex with Dr. Shaw, who in turn was infected, but in a different way. Dr. Shaw then had the Trilobite creature cut out of her by the autodoc. The creature crew rapidly and attacked an Engineer that had come to kill Shaw. The Engineer was overwhelmed and the Trilobite hugged him in a big embrace, infecting him with the Deacon creature. 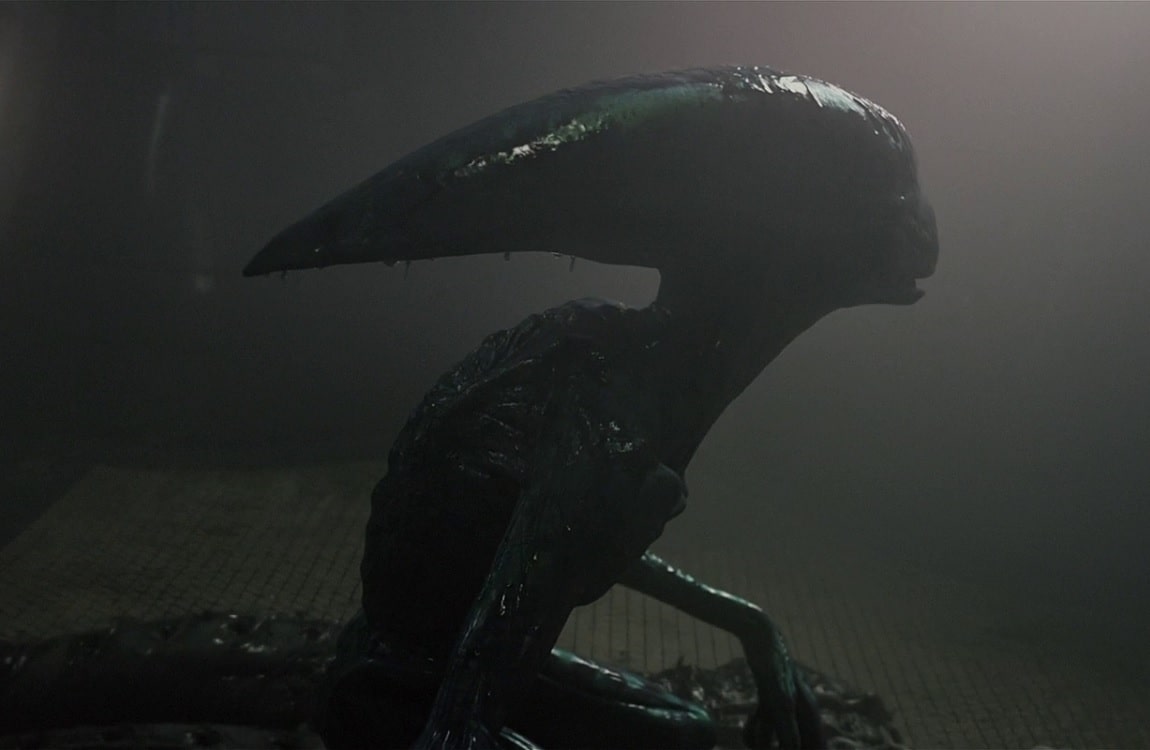 The Deacon born from the Engineer was quite large from the start and different from other chestburster types. It had a sharp-tipped head and blueish skin. Sadly, the Deacon was left stranded on LV-223 with no other lifeforms around. Although its fate is left open in the movie, the Fire and Stone series did offer some hints of its whereabouts. Presumably, the Deacon transformed into an organic mountain due to the effects of the Black Goo contagion of the planet, forming its mass around the wreck of Weyland's ship. 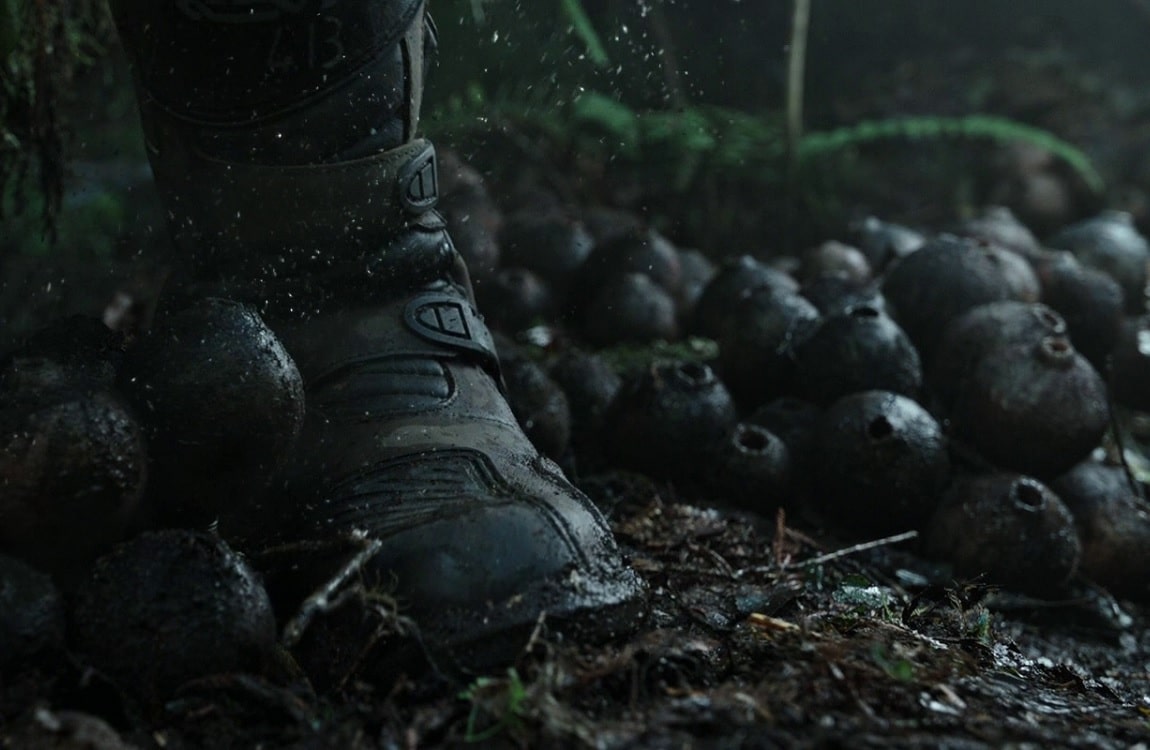 When David released the Black Goo pathogen over the city in Alien: Covenant, he killed off the whole Engineer population on the planet. However, the pathogen didn't only react with the Engineers and wildlife (if there was any), it also mutated the plant life. In various locations around the city, a new type of fungus formed which emitted airborne motes when disturbed. These infected 2 different crew members of the USCSS Covenant and were the basis of the Neomorphs. This lifecycle was actually much more efficient than the facehuggers, although the Xenomorph was probably a more perfect creature than Neomorph. 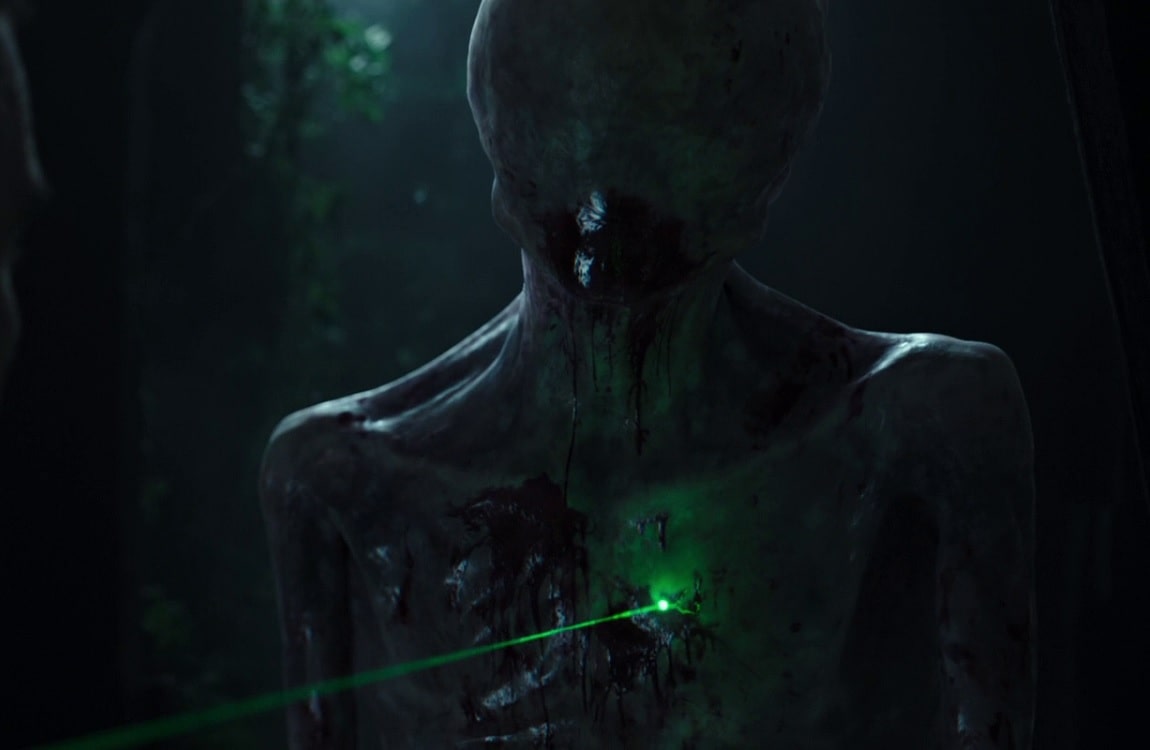 As mentioned before, the Neomorphs were the result of airborne motes infecting humans and an embryo growing rapidly inside them. Unlike the Xenomorph chestbursters, the process seemed to affect the host more, with them feeling and looking worse by the minute. The Neomorph young did not erupt from the chests, but from either the back or the mouth of the victim. Again, the just born Neomorph grew rapidly, was aggressive from the start and became deadly in seconds, using its mouth and claws to attack. There have been only two known Neomorphs from Planet 4, and one of them surprisingly survived. The original fate of the second Neomorph was to have a fight with the Protomorph and lose, but this was cut from the movie. 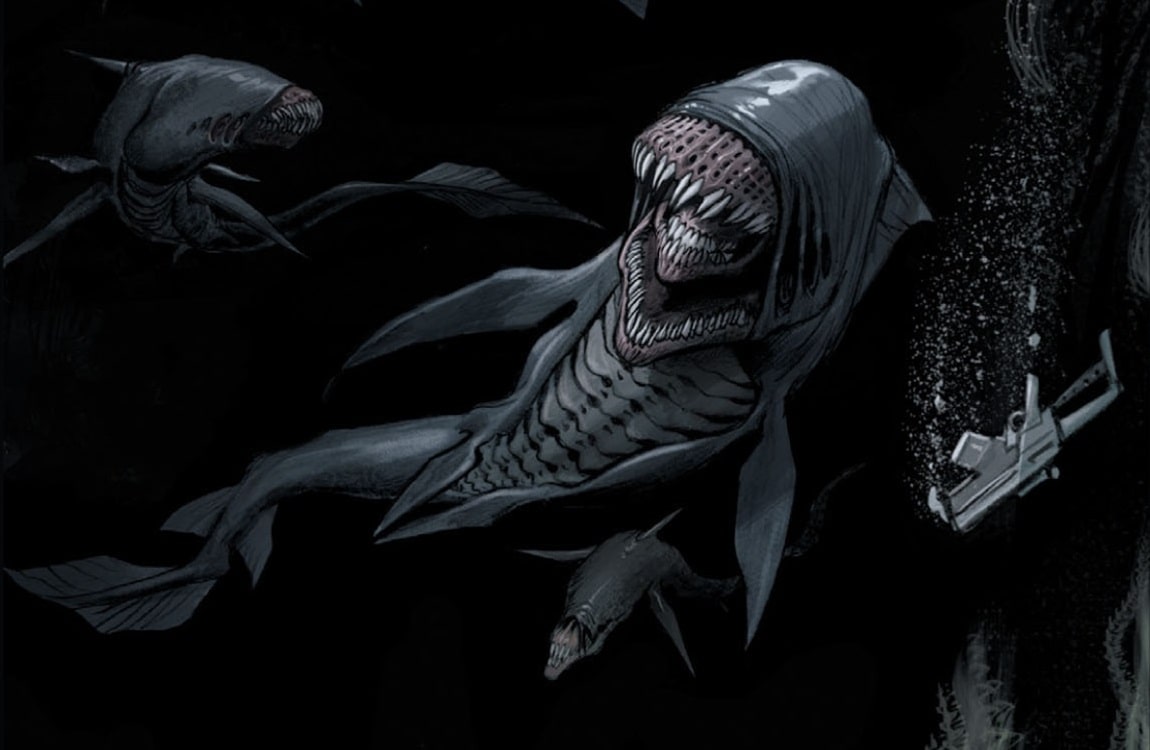 After the USCSS Prometheus smashed into the Juggernaut ship, it crashed to the surface and started leaking the Black Goo pathogen. During several decades, this transformed LV-223 into a lush world of jungles and wildlife, at least in the area around the crashed ships. In Prometheus: Fire and Stone, a research and recovery vessel named Geryon visited the planet and encountered this strange phenomenon. The small bodies of water on the surface became home for double-mouthed fish, resembling the Deacon mixed with a shark. The fish were aggressive and tried to eat a crew member of the Geryon who fell into the waters. 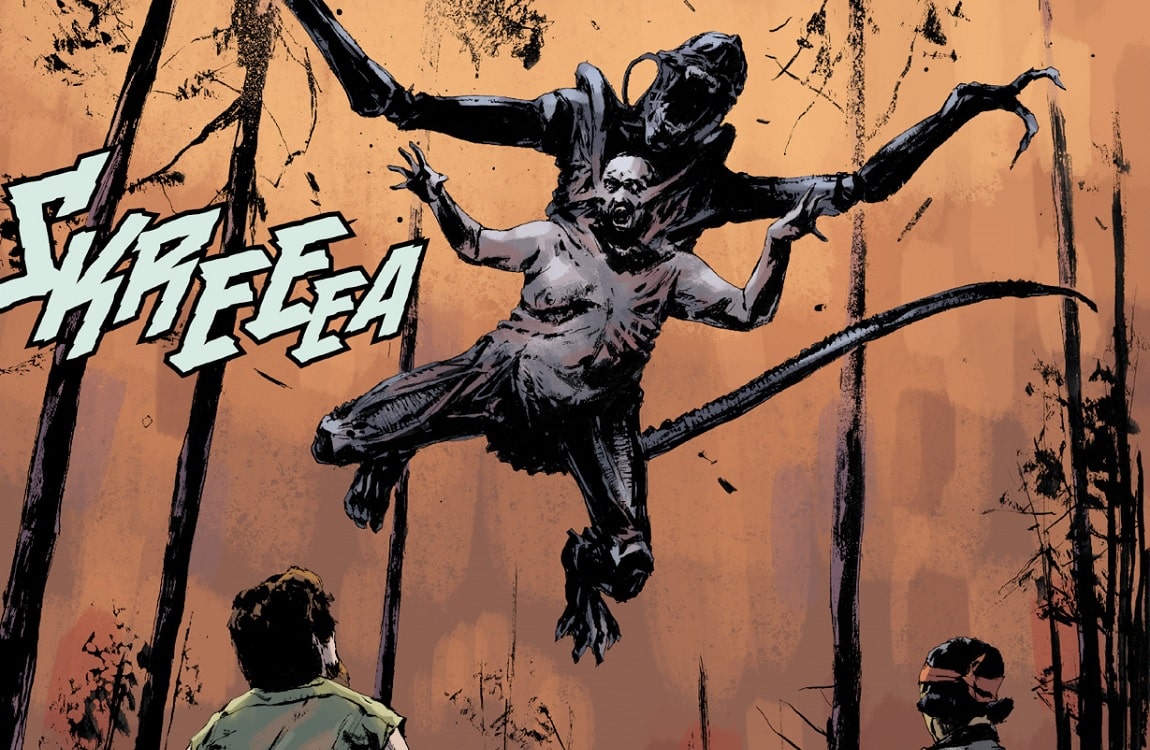 In a bizarre turn of events of Aliens: Fire and Stone, about half a dozen colonists from Hadleys Hope escaped onboard the Onager to LV-223 before the events of Aliens. Not only did they have to deal with the Black Goo leaking from the Engineer Juggernaut, they accidentally brought the Aliens with them from LV-426 in a cargo container. The Aliens started massacring them immediately, but some escaped to the mountains. Due to the effects of the Black Goo, one of the Xenomorphs fused together with a colonist to form a Xenomorph-human hybrid. This monstrosity did not lose much of the Xenomorph's mobility, it was still able to leap around with a fat colonist piggybacking on its belly. 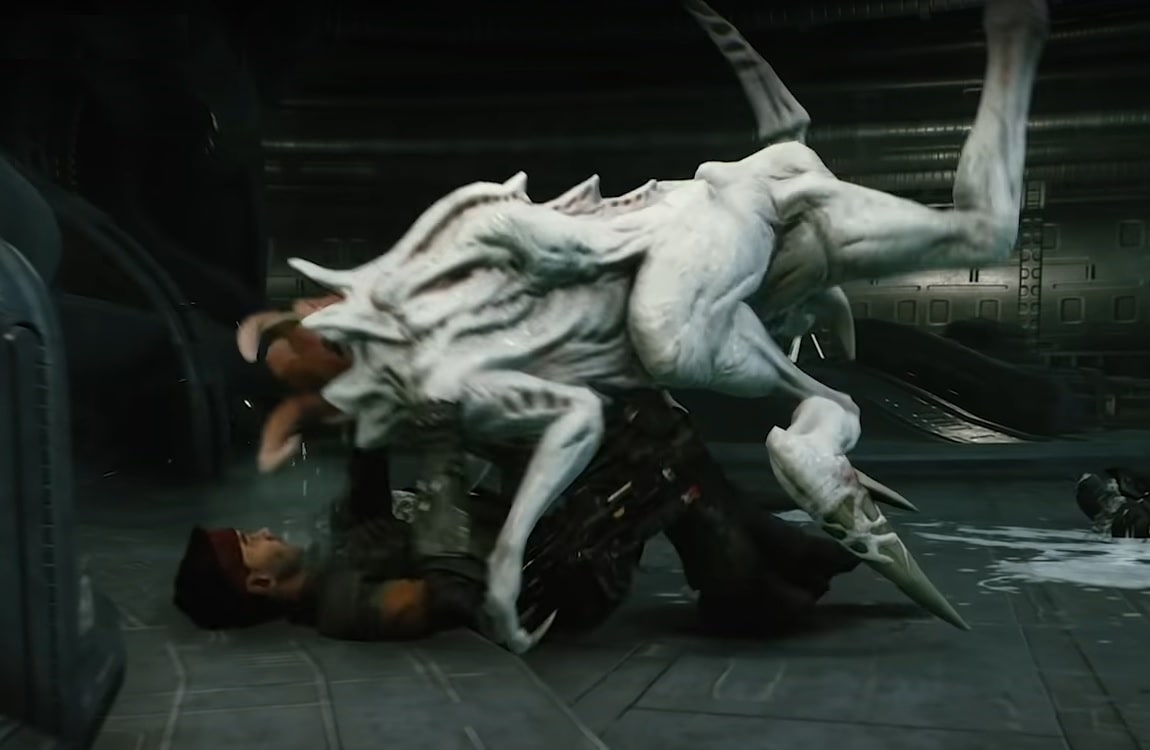 Aliens: Fireteam Elite introduces new Pathogen creatures in addition to regular Xenomorphs types. At least two such different creatures are featured in the game, serving as enemies. A bigger monster nicknamed the "Stalker" resembles a Neomorph crossed with a Hellhound and uses its claws and big mouth to attack. Supposedly, it has camouflage abilities which it inherited from its original host on the planet LV-895. A smaller creature looks like a headcrab from Half Life but has longer legs and white skin. These so called "Poppers" attack en masse and explode in rain of acid.

Want to know more about the Xenomorph expanded universe? Check out the prospects of surviving a facehugger and take a look at the white Xenomorph types.