The Space Jockeys (also known as Engineers) fly around in gigantic ships, containing a deadly payload of bioweapons. These ships often crash and are left in derelict state on some barren planet, ready to be discovered by helpless explorers. While most of these ships look like a horse-shoe, there are some more exotic designs from the Expanded Universe that look a bit different. 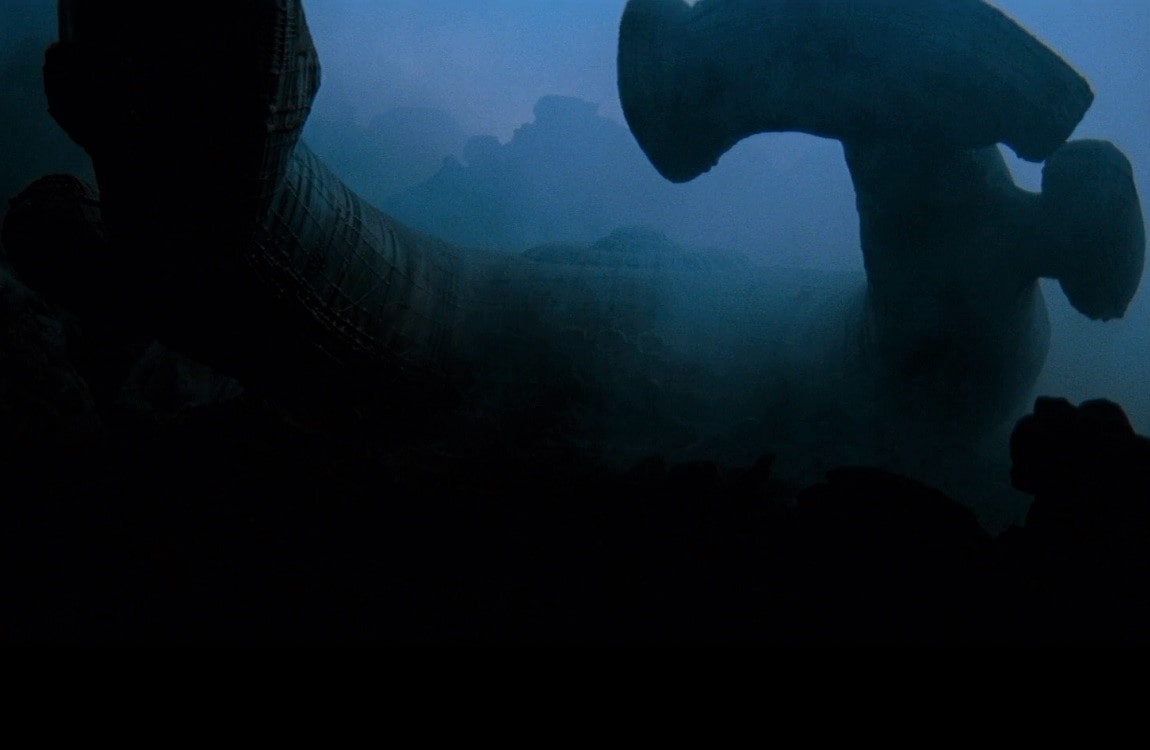 Presumably, the Space Jockey derelict ship from Alien crashed landed on LV-426 a long time ago and the pilot set up a warning beacon about the dangerous cargo of Xenomorph eggs. After Alien: Covenant, Ridley Scott hinted that the android David might be behind the Lv-426 ship and eggs and the ship might only be a few decades old. Regardless of its origins, the ship received lava damage between the events of Alien and Aliens and one of its appendages broke off. The warning beacon was also switched off, either by Dallas (in Alien Illustrated Story), the crew of the USCSS Anesidora (in Alien: Isolation) or the result of the seismic damage. According to both the Colonial Marines Tech Manual, the ship survived the atmosphere processor explosion from Aliens, presumably being shielded by the Ilium mountain range. In AvP: Classic, about 10 years after the events of Aliens another colony and research facility was set up around the ship. Again, an atmosphere processor went critical, but as it was so close to the ship, it wiped it out as well. 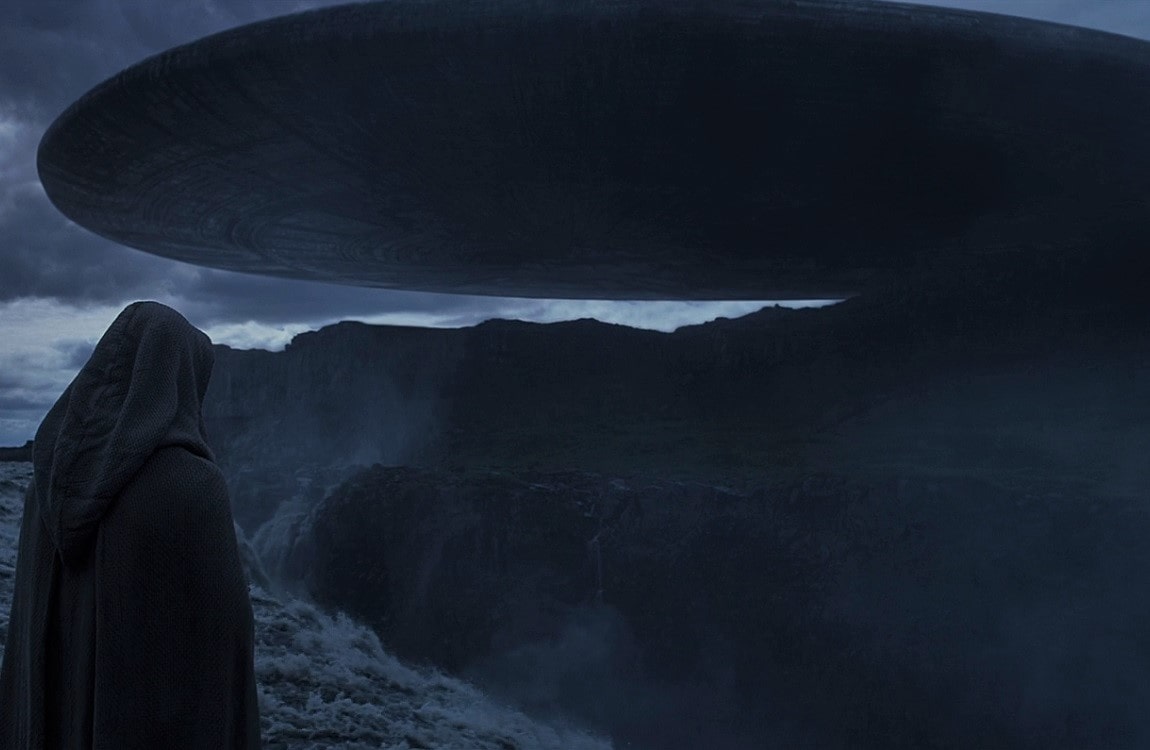 Not much is known about the Engineer mother ship, except that it hovered over the planet which we can assume was Earth at the start of Prometheus. It had an uninspired design of a flying saucer and was missing the weirdness of H. R. Giger that was proposed at least in some concept art. This giant black ship most likely monitored the terraforming of barren planets and transported the sacrificial Engineers to their final location. The ship had no trouble with entering the atmosphere and was presumably very fast like that the Juggernauts seen later in the series. Possibly the Engineers switched to smaller craft later in the series when they started to weaponize the black goo. 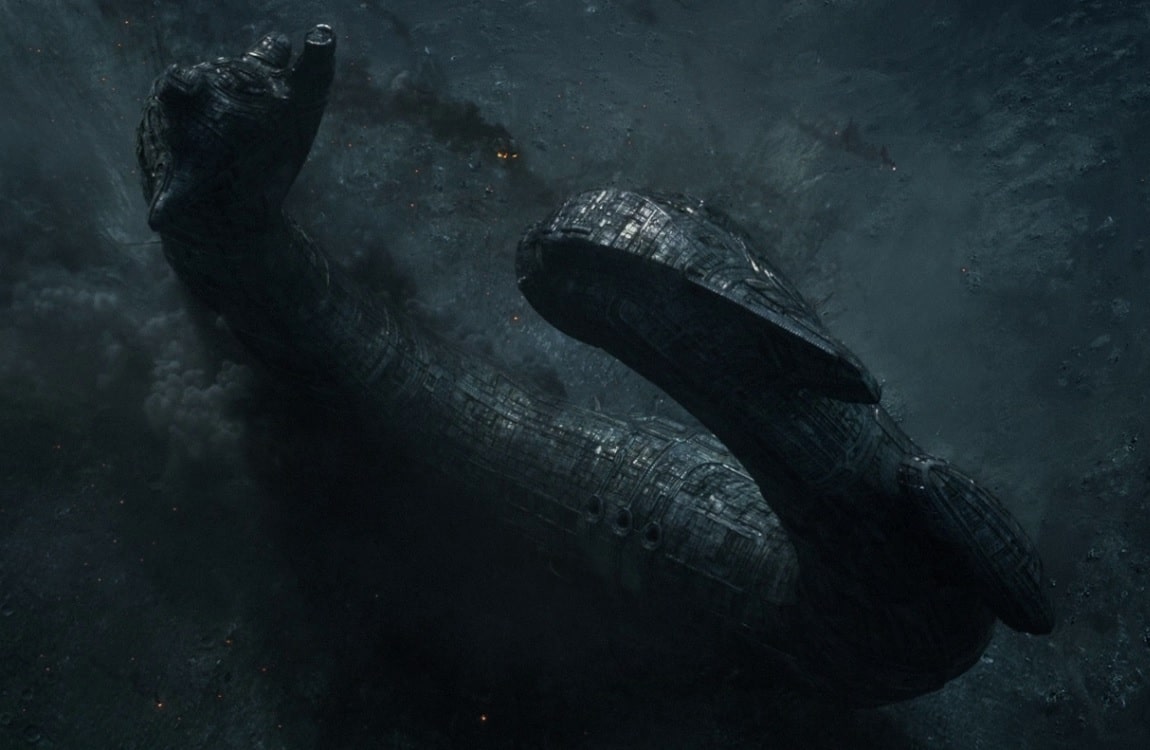 The LV-223 Engineer bio-engineering facilities contained many ships, nicknamed the Juggernauts. At the end of Prometheus, the awakened Engineer activated one of these, and presumably set a course to Earth to unleash the deadly cargo of black goo. This was stopped by Captain Janek, who crashed the USCSS Prometheus into the Juggernaut. Although it seemingly received no damage, the Juggernaut crashed to the surface, rolling around and crushed the hapless Meredith Vickers in the process. Like the ship, the Engineer pilot survived intact and set out to exact revenge on the surviving humans, whom only Dr. Shaw remained. The now derelict ship also showed up a hundred years later in the Prometheus: Fire and Stone comic series, where the surface of LV-223 had been transformed to a lush jungle. 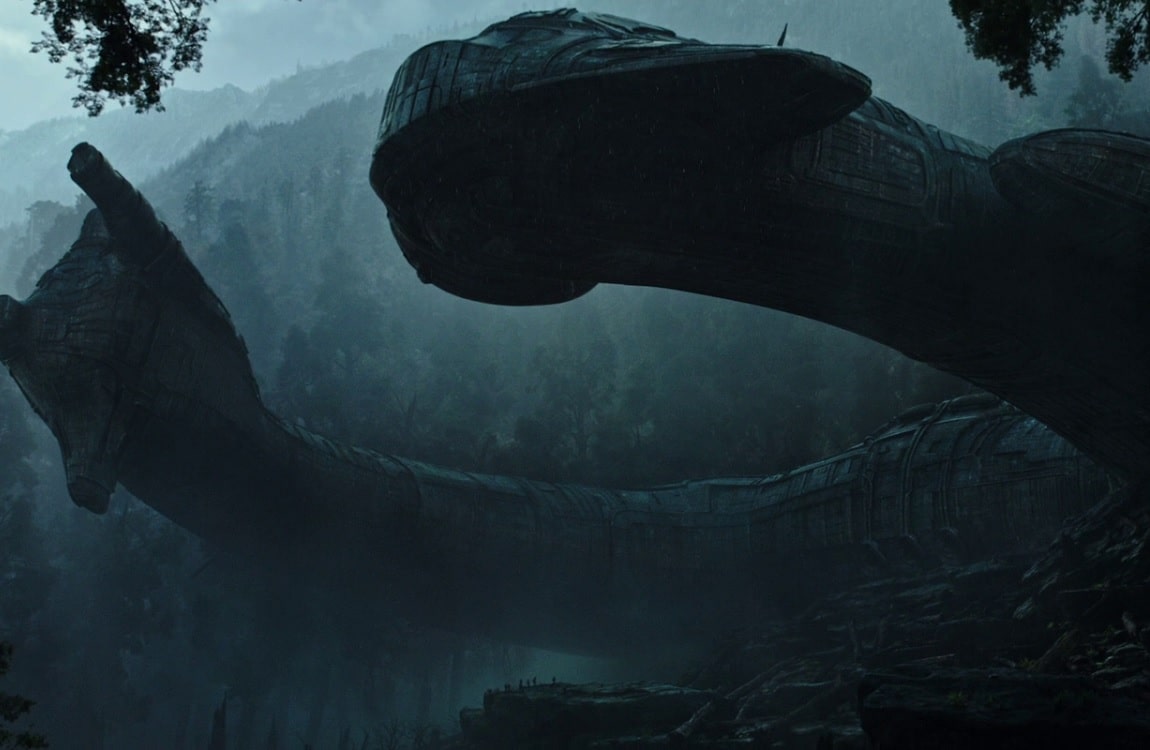 While the LV-223 Engineer wanted to take the first Juggernaut to Earth, Dr. Shaw on the other hand wanted to take the second Juggernaut to the Engineer home planet. The ship was piloted by the head of David the android, who had learned both the language and the technology of the Engineers. Before the events of Alien: Covenant, the ship reached an Engineer planet (unknown if the home planet) and David unleashed its deadly cargo of black goo, eradicating all life in the vicinity. Probably the city defenses then shot the ship down and it crashed in a nearby forest. Dr. Shaw then released a distress signal that was picked up by the USCSS Covenant and the ship was soon discovered thereafter. 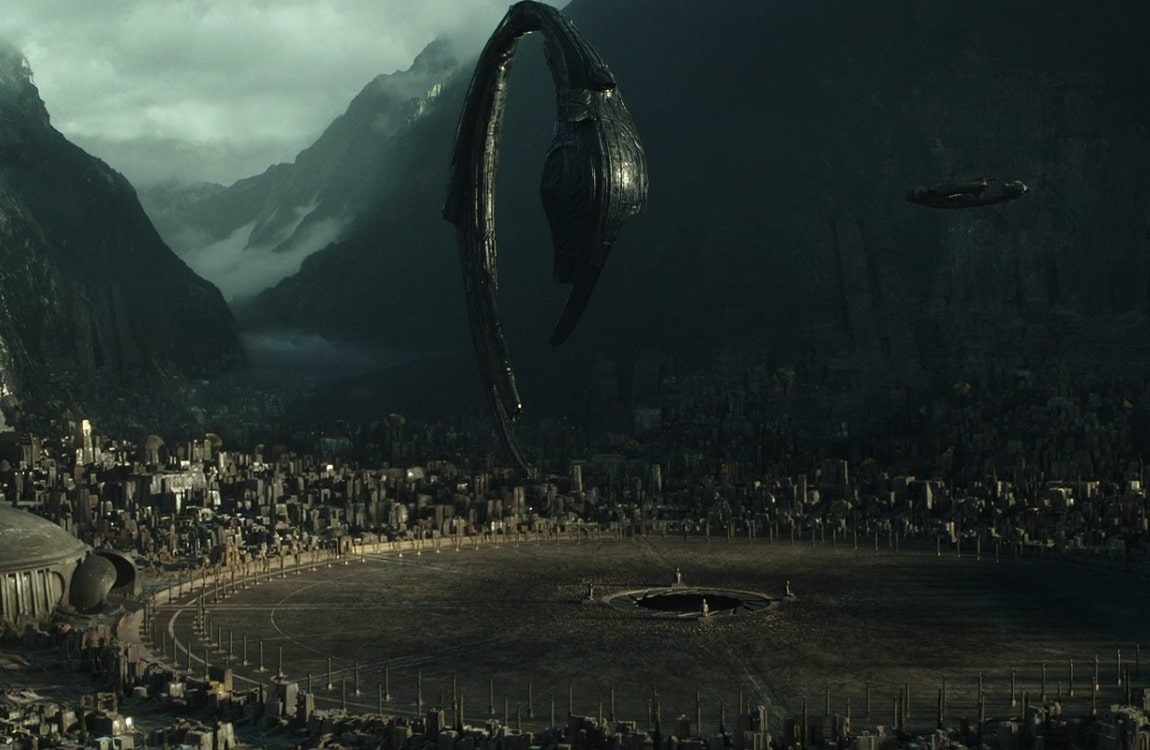 The Docking Claw was a mysterious ship that hovered over the Engineer city in Alien: Covenant, presumably taking in incoming ships. Its design was true to H.R. Giger, something that was lacking in the Mother Ship from Prometheus and the Romanesque city where it hovered as well. It is lesser-known fact that the Docking Claw is later seen crashed in the forest behind the city for a brief second when the Covenant crew escaped onboard the cargo lift lander. Presumably, the craft had a short battle with the Juggernaut piloted by David and both ships crashed in the forest, but on different sides of the city. Most likely it had some hidden offensive capabilities and served to protect the naive citizens underneath it. 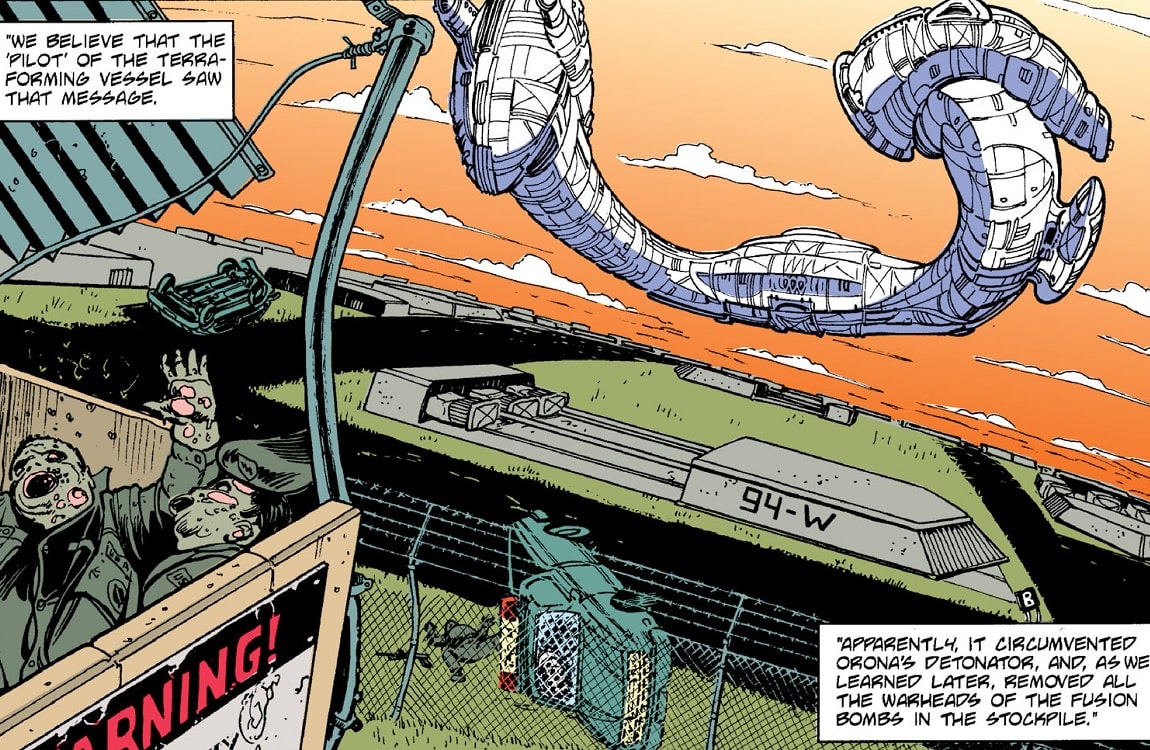 The Emissary Space Jockey ship observed the infestation of Earth and its aftermath during the Alien Earth War comic saga. In a convoluted plot, the Space Jockey tried to make Earth habitable again and altered the size of the nuclear explosions that wiped out most of the Xenomorphs. Using his ship, he then applied terraforming capabilities on the surface of the planet. In an elaborate scheme, the US government sent a delegation to the ship to negotiate with the Space Jockey. However, most of the delegation were androids set out to kill the Emissary and disrupt the operation of the ship. The white boneship was then destroyed by more nuclear missiles sent from Earth. 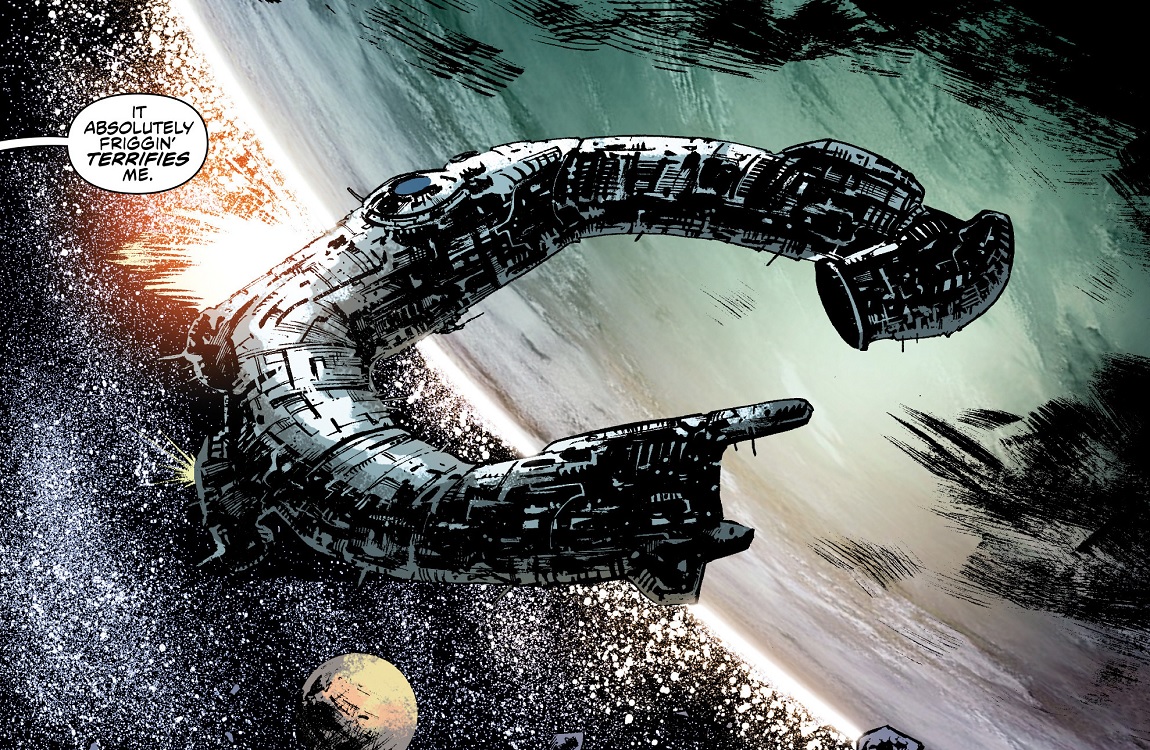 The LV-797 ship from the Life and Death series was an ordinary Juggernaut but unique in the sense that it was first discovered by the Yautja and guarded by them as a trophy that would unlock ancient secrets. The Colonial Marines from the USS Hasdrubal under the command of Captain Paget contested this ownership and fought the Predators over the ship. There were losses on both sides, including the killing of the Hive Wars Predator, but the Colonial Marines were successful and gained access to the ship. With the help of an android, they hotwired the ship to fly back to a human starbase. During the journey, an Engineer woke up from a damaged cryopod and set the course to LV-223 (the planet from Prometheus) instead. Later, the ship left LV-223 and flew to an unknown planet with plant life and presumably an atmosphere as well. 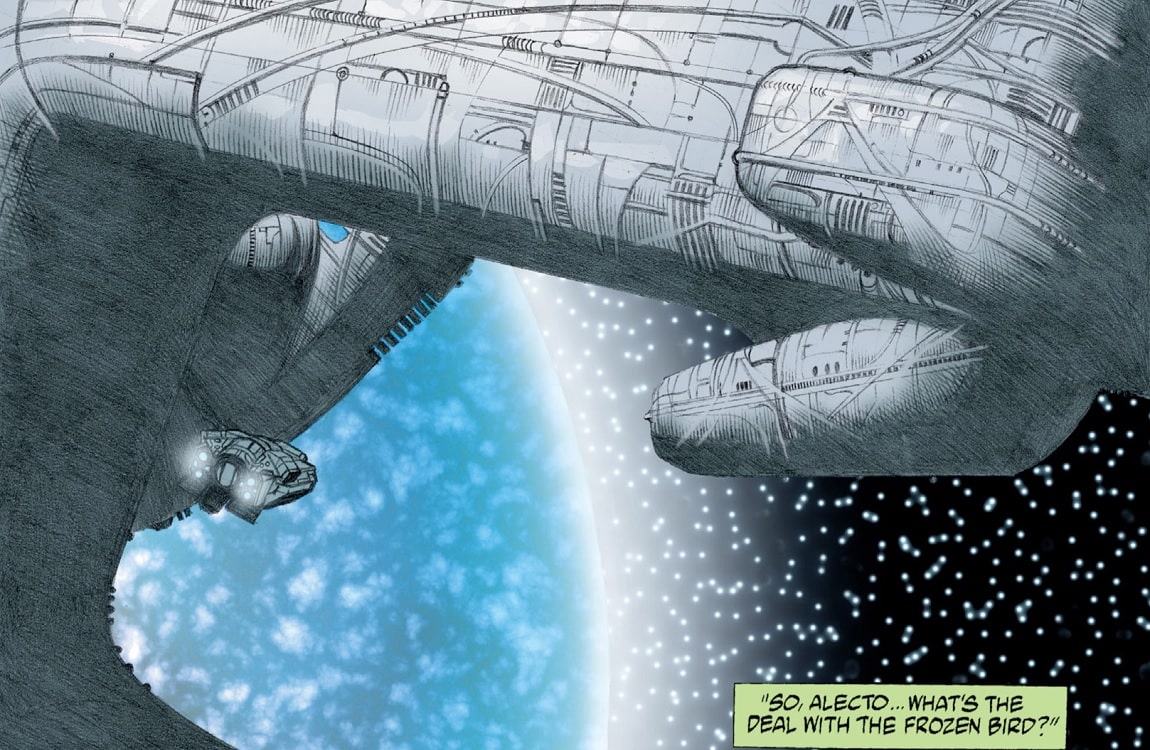 The derelict ship from Aliens: Apocalypse (an underrated comic with a very similar story to Prometheus) was discovered in orbit of a planet in the Shambleau system. It was perhaps the only ship that was discovered in space, and not crashed on some barren world. Although it was still shaped like a horseshoe, one of the appendages was much larger than the other, making it appear more like a floating pistol. The first team sent to the ship was headed by Dr. Lucien Keitel and set out to research the ship. When the team stopped responding years after, a rescue mission was mounted by Throop transport, a small company headed by Alecto Throop. Onboard the ship they encountered another dead Space Jockey and evacuated after being attacked by a Xenomorph. Data from the ship pointed them to a planet with further Engineer installations and the location of Dr. Keitel. 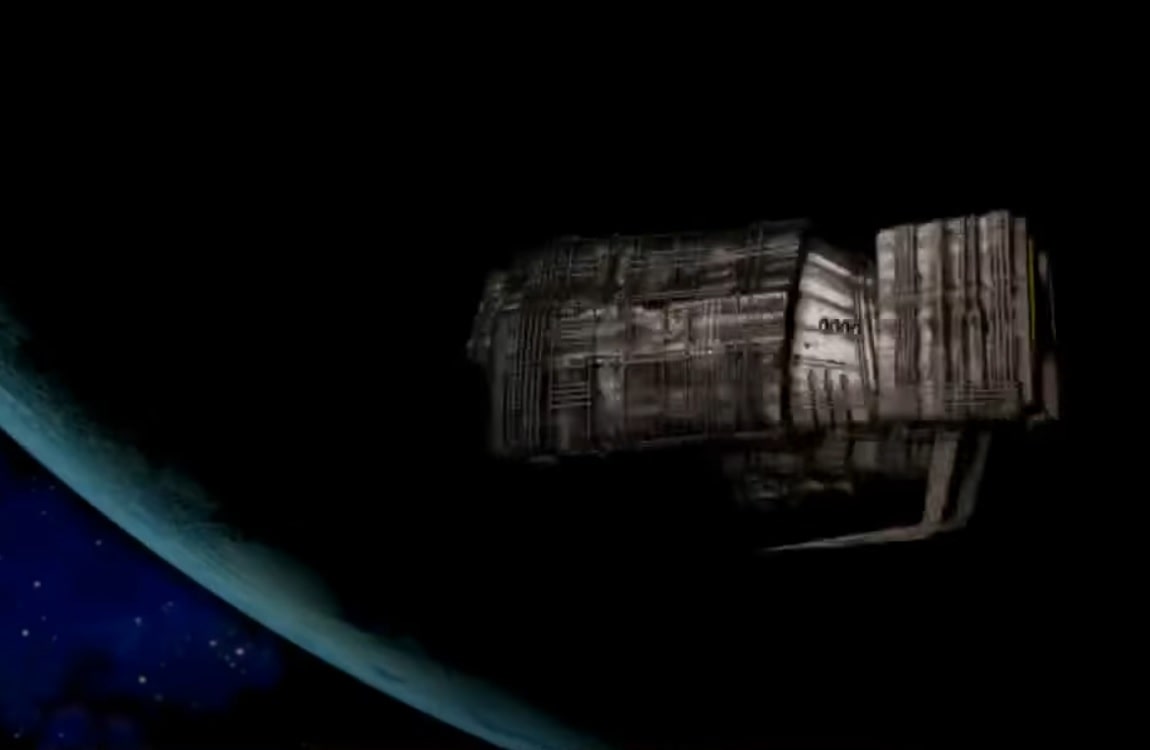 The Space Jockeys from the lesser-known Alien: The Comic Book Adventure game were a bit different from the ones seen in the movies and comics. They flew around in a rectangular ship that still held the Giger markings on the surface, but the shape was different from all the others. The ship's purpose was to purify planets infested by Xenomorphs, a feat similar to a Death Star or one of the Protoss ships from Starcraft. The purification happened by shooting two red laser missiles into the surface of a planet. This would cause a chain reaction and an explosion, which either destroyed the whole planet or left it in a barren state (it is unclear in the game). The Space Jockeys themselves looked different as well, being similar to space bikers with their leather outfits and high boots. 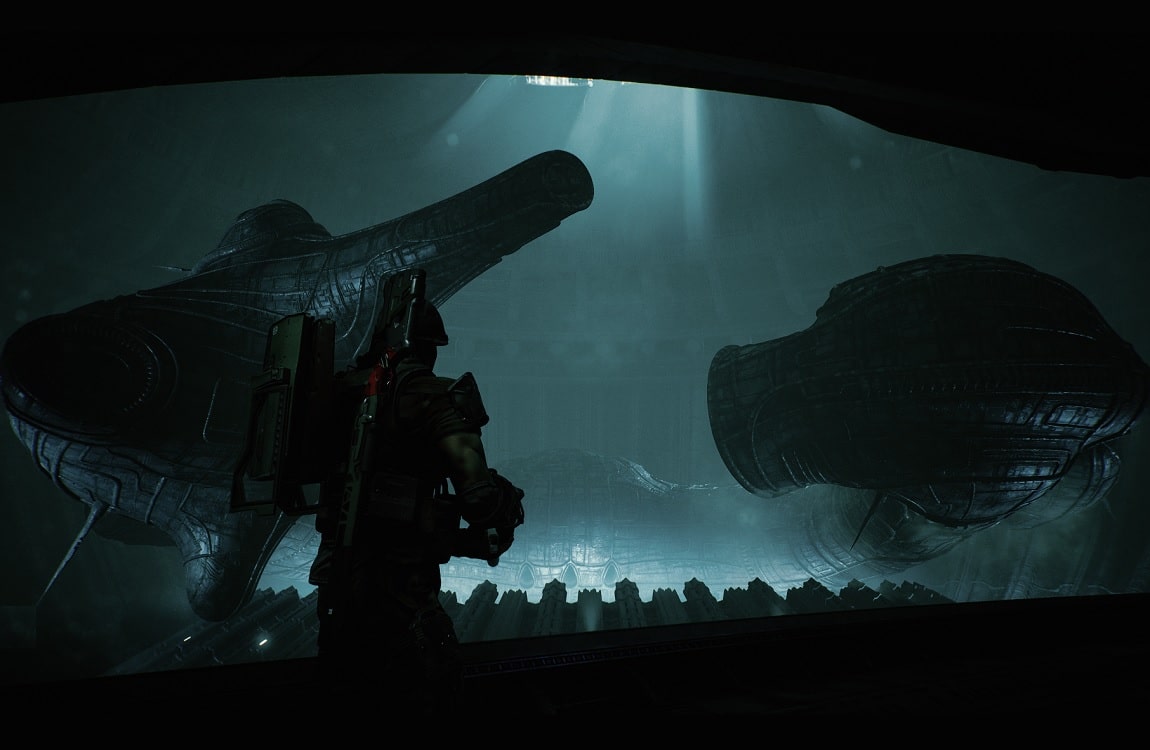 Asset Zero was a codename given to a Juggernaut ship on LV-895 which was discovered and disabled by a Colonial Marine team from the UAS Endeavor. The Colonial Marines weren't the first humans on board, Weyland-Yutani had already secured it and conducted research onboard the ship. When a rogue Weyland-Yutani AI named SN/TH/YA wanted to send the ship to the Gateway Station in the Solar System, the marines did everything to stop it from launching. Instead of blowing it up, they disabled the ship's engines while fighting hordes of Pathogen creatures, stopping them from reaching Earth. These events occurred in Aliens: Fireteam Elite, in one of the best levels of the game named Gift of Fire: Boarding. 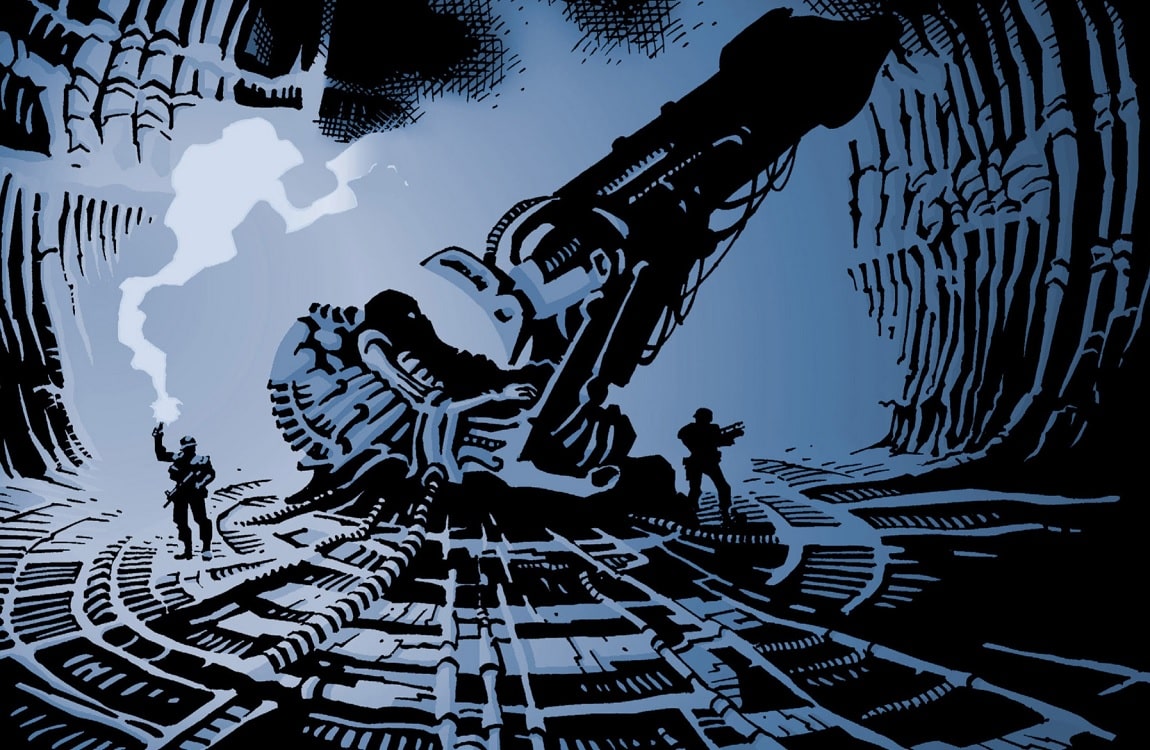 In Aliens: Wraith, an ancient Engineer Derelict Ship is fused with underground caves and we never see the exterior of it. The craft was located on an agri-colony on Tirgu-Mires, where a gang of local teenagers ventured into the caves to escape boredom. More than twelve of them did not come back, as a lone Xenomorph Warrior was stalking the ship and taking hosts. When the Xenomorph ventured outside the caves to chance another group of teenagers, a squad of Colonial Marines arrived and blew the Alien apart. In a surprising twist-ending, the Colonial Marines killed the surviving gang of teenagers, wiping out any witnesses. The marines then descended into the caves and discovered another Space Jockey chamber, with a dead Engineer sitting in the pilot's chair. 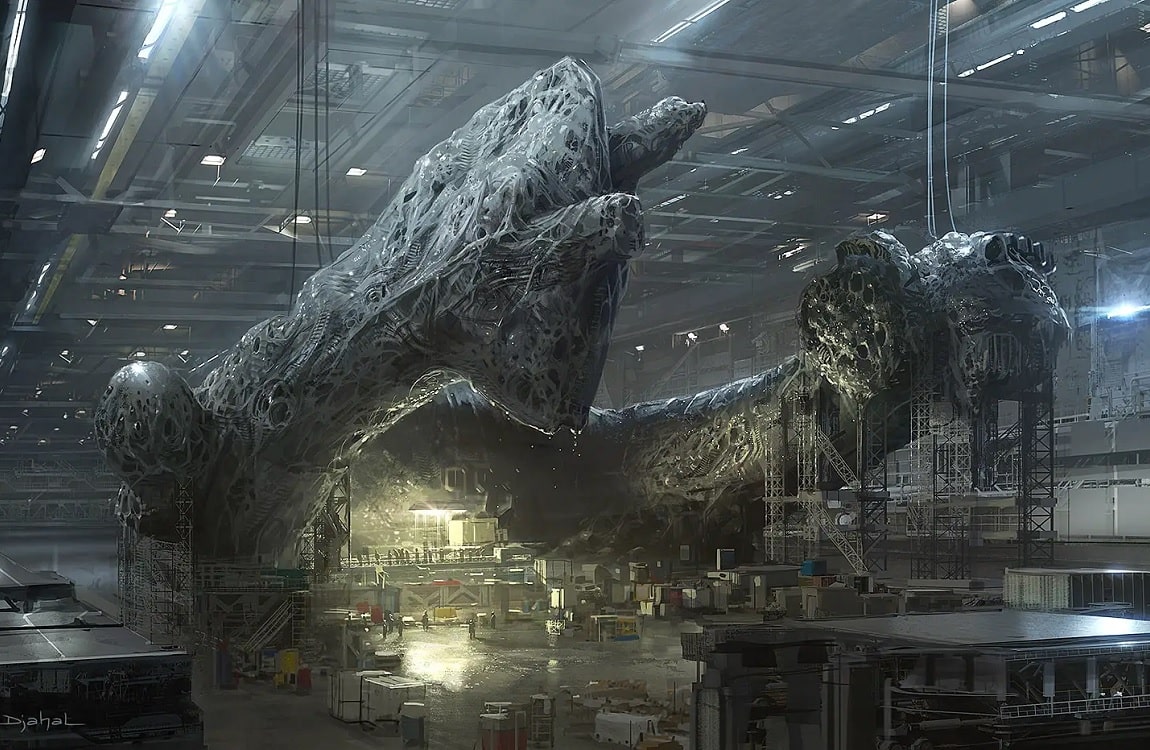 Neill Blomkamp's proposed Alien 5 project would have involved a Derelict Ship in an important way as seen in official concept art. It is unclear if it would have been the same Derelict from LV-426, or a completely new one. The ship looks somewhat different, with the outer layer having grown outwards or having been melted, possibly a result of the atmosphere processor explosion. Regardless, Weyland-Yutani had built a research complex around the Derelict, similar to the AvP Classic and Colonial Marines video games. Ripley, Hicks, and Newt (in an alternate reality from Alien 3) would have joined forces to take down the company and destroy the ship, along with any Xenomorphs. Unfortunately the movie was canceled and Fox went along with Ridley Scott's Alien: Covenant instead, with mixed results. 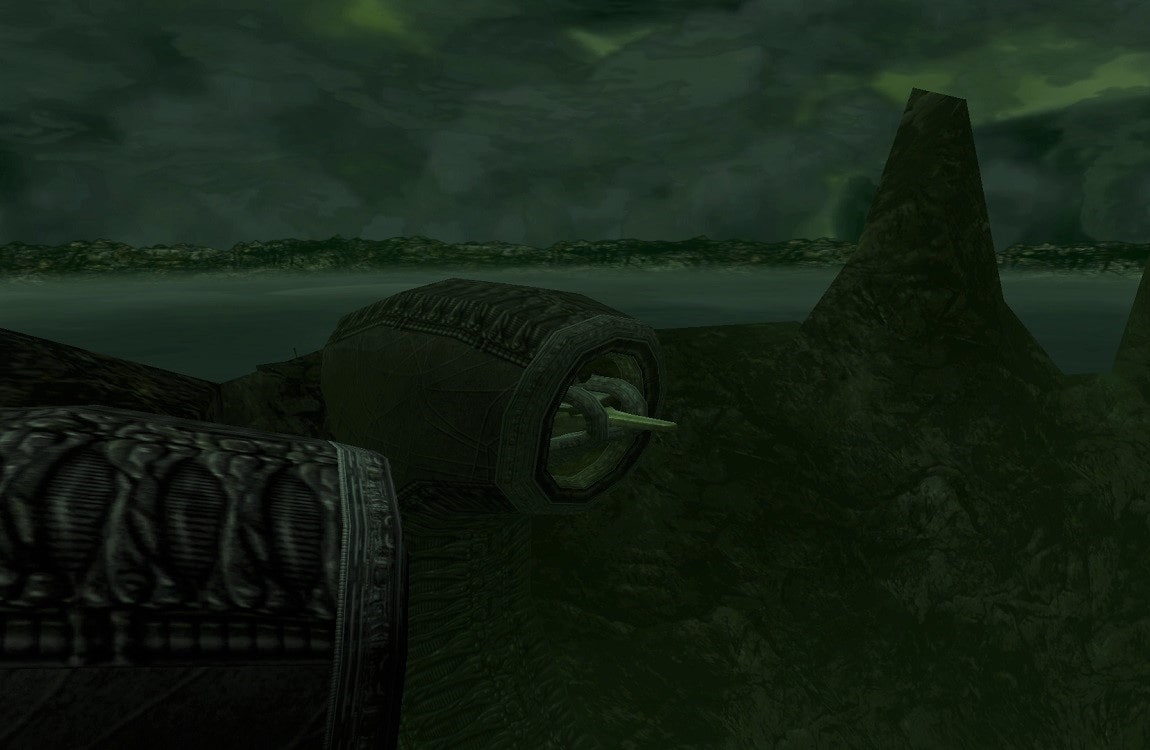 The Space Jockey installation from LV-1201 wasn't necessary a ship, but parts of it could have been made for space travel. Featured in Aliens vs. Predator 2, the installation contained at least one dead Space Jockey pilot, sitting in a similar chair like the one on LV-426. The Space Jockeys had inhabited LV-1201 thousands of years ago and embedded their installation in deep underground caves, while parts of it were still on the surface as well. When a Xenomorph infestation broke out, the Aliens infested all the tunnels and converted them into one of the biggest known Xenomorph hives ever.

Want to know more about the Space Jockeys? Check out the list of Predator vs. Engineer fights.