Besides their famous APC and the Power Loader, the Colonial Marines don't employ many ground-based vehicles. The Colonial Marine Technical Manual has introduced tanks and self-propelled guns, while the comics and Kenner toys have also brought to light a few new vehicles. This overview does not include mech suits as they have been covered by another list. 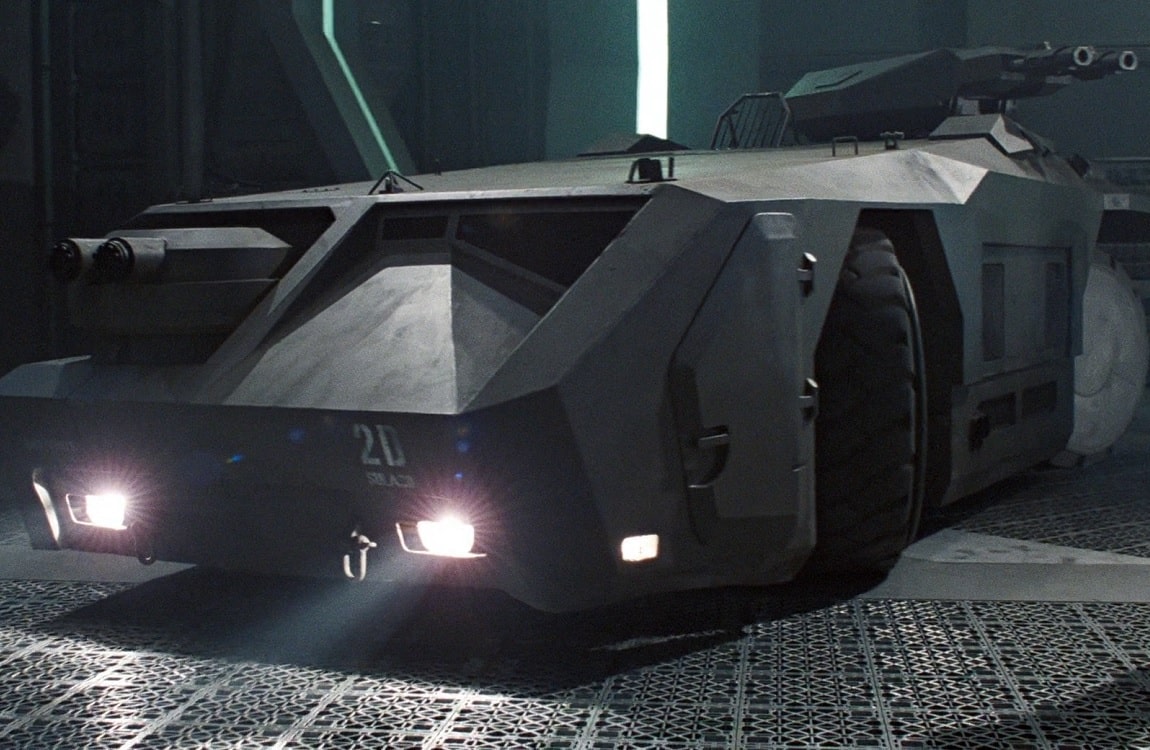 The M577 APC is one of the most iconic symbols of the Colonial Marines, including the M41A Pulse Rifle and the UD-4 Dropship. The main purpose of the APC is to transport troops into and out of battle, but can also give supportive firepower. The roof turret is the vehicle's main weapon, and it's possible to move it to the back of the APC for a leaner height. The RE700 rotary canon is located in the front and offers a limited arc against infantry targets. Besides the sitting arrangments for the Colonial Marines and stores for their weapons, the inside mounts the command center for the commander. It is not entirely clear who built the M577 APC-s, but some expanded universe signs point to Weyland-Yutani. 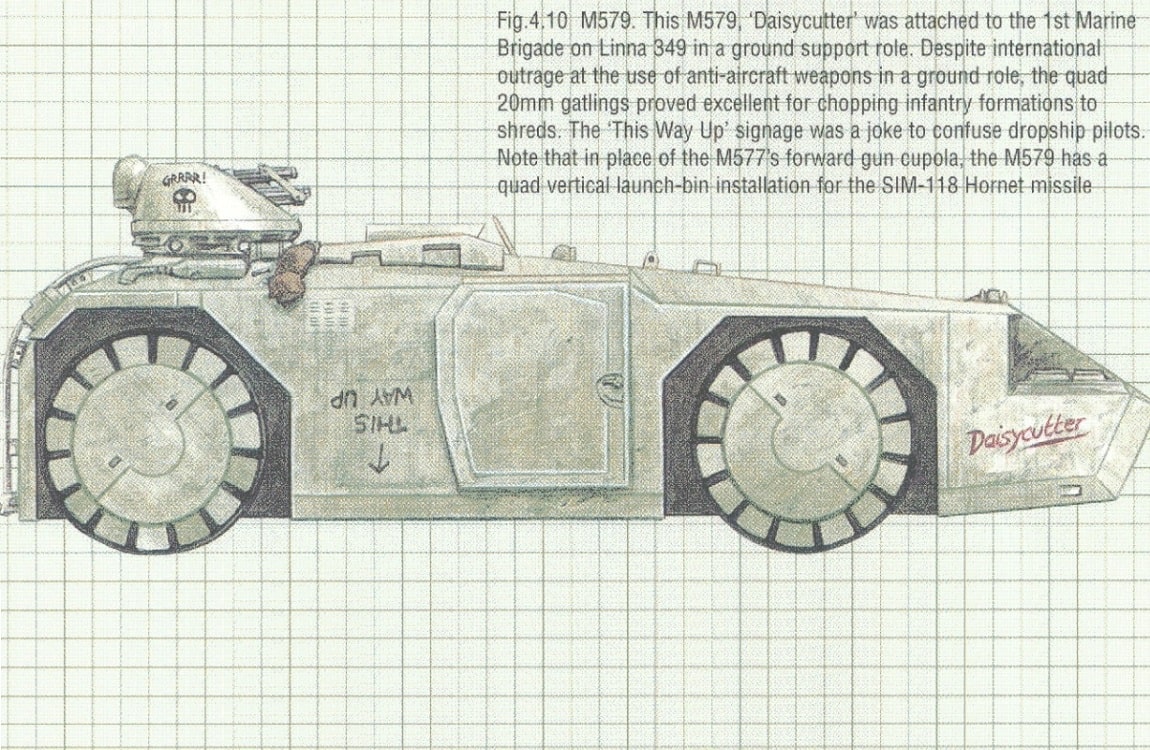 The M579 is one of several APC variants introduced in the Aliens: Colonial Marine Technical Manual, but the only one pictured. The main difference with the M577 is that the roof turret has been replaced with an anti-aircraft gatling gun. It was used for great effect against infantry in the Linna 349 campaign, a major engagement that the Colonial Marines fought before the events of Aliens. The forward RE700 rotary canon has also been removed in favor of a slot for the SIM-118 Hornet missile. Other APC variants in the book included the M577A and the M577A2, which even included "free electron" lasers for assault. 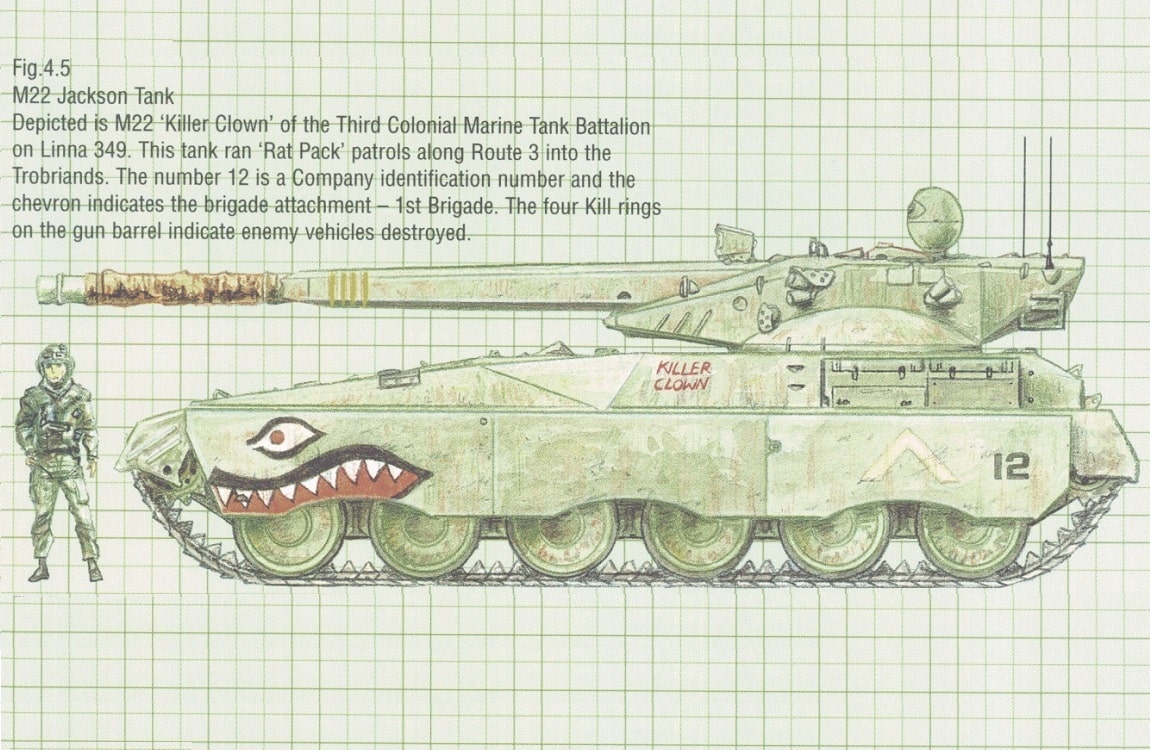 The Colonial Marines don't employ many tanks, focusing on a leaner and meaner infantry-based approach. The M22 Jackson tank is a medium tank and it needs a heavy dropship variant (UD-24) to carry it from orbit. The tank is lacking a futuristic look and seems like it drove off the desert of the Gulf War in the 1990ties, instead of being drawn by James Cameron for the 22nd century. Besides the visuals, the tank is heavily automated and takes the workload off the small crew. The M22 Jackson is used in an infantry support role and not en masse. The Tech Manual also brings out an M34A2 Longsheet light tank, taken over from the US army. 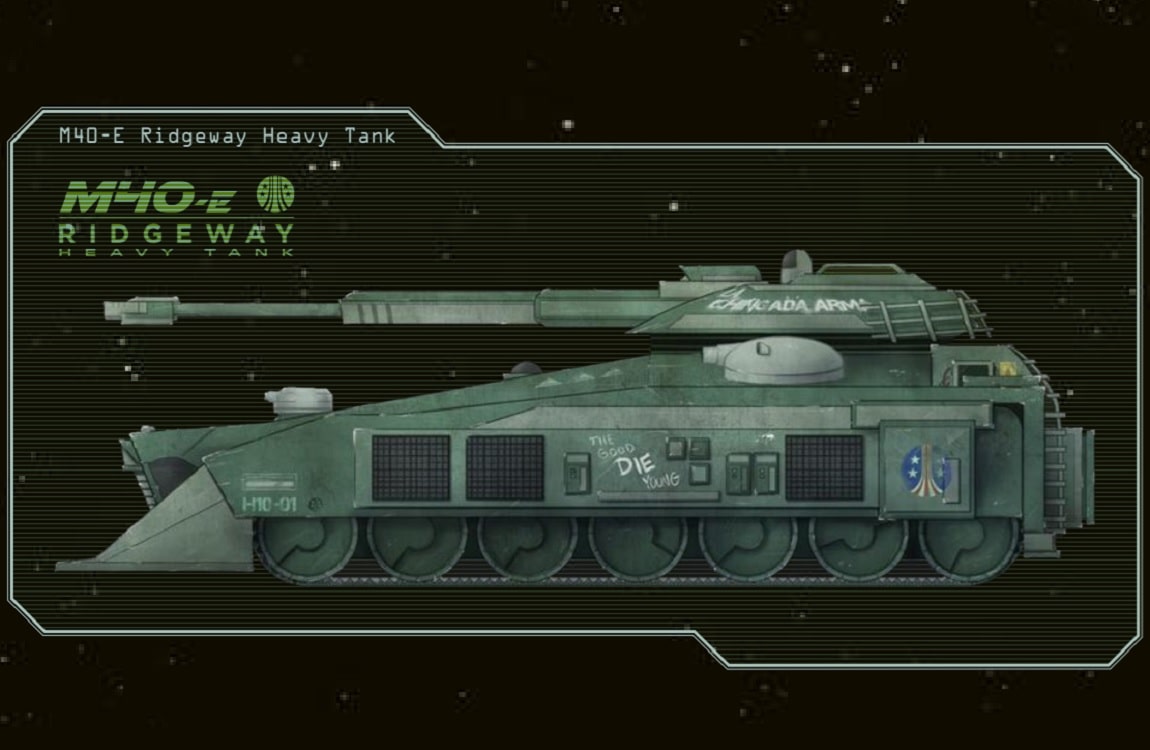 M40 Ridgeway is the heaviest tank in the Colonial Marines arsenal, providing thick armor which is well balanced by the speed and mobility of the vehicle. The tank can provide smoke support, drop mines and even fight against aerial enemies with its phased plasma point defense gun. The M40 Ridgeway appears both in the Colonial Marines Tech Manual and the newly released Alien RPG - Colonial Marines Operations Manual, which also illustrates the M40-E variant. The tank comes with a mine plow in the front and is capable of indirect fire with its 60mm mortar. Unfortunately, these tanks are yet to appear in any games or comic books, appearing only in the reference manuals. 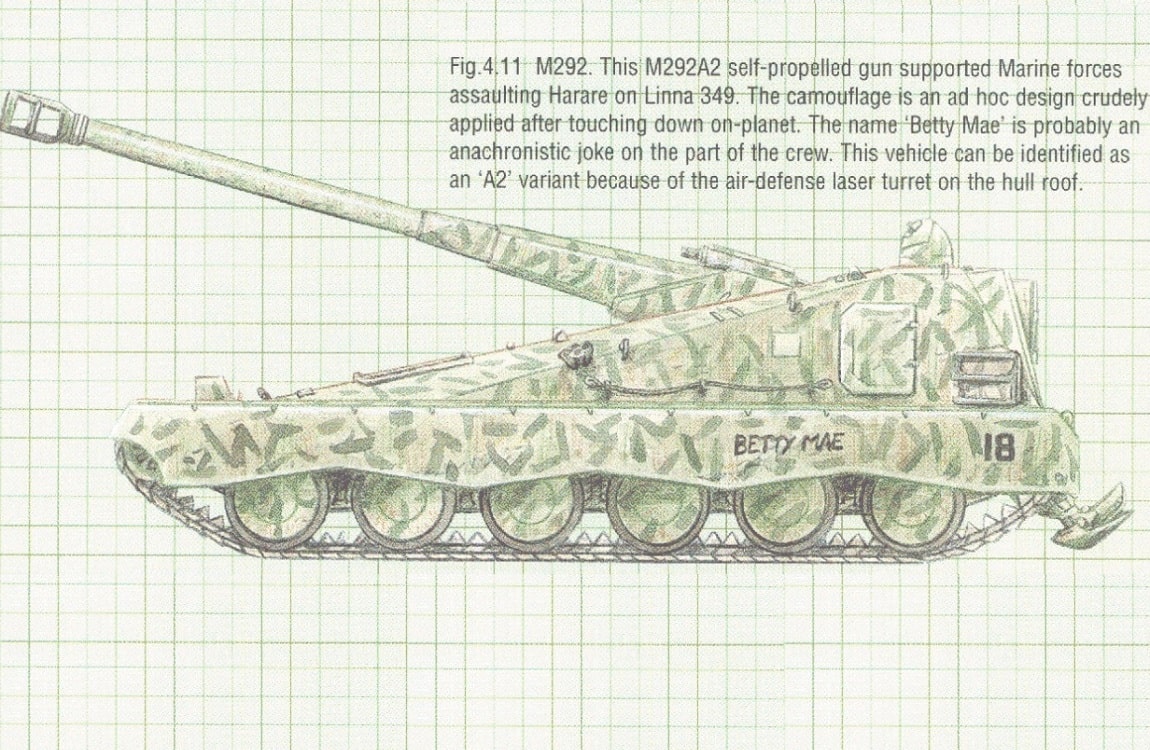 The M292 is a self-propelled artillery system. In simpler terms, it is a cheaper version of a tank, but with a more powerful cannon that is less mobile. It weighs 38 tonnes and comes with a single 41 caliber tube. The vehicle carries only 78 rounds and is able to shoot these off in an auto-loaded rapid-fire system. Some of the shell variants include smart tracking, being able to home in on vehicles and structures. Another shell variant is able to have a maximum range of 68 km. The Colonial Marines should probably have an easier time of nuking things from orbit. 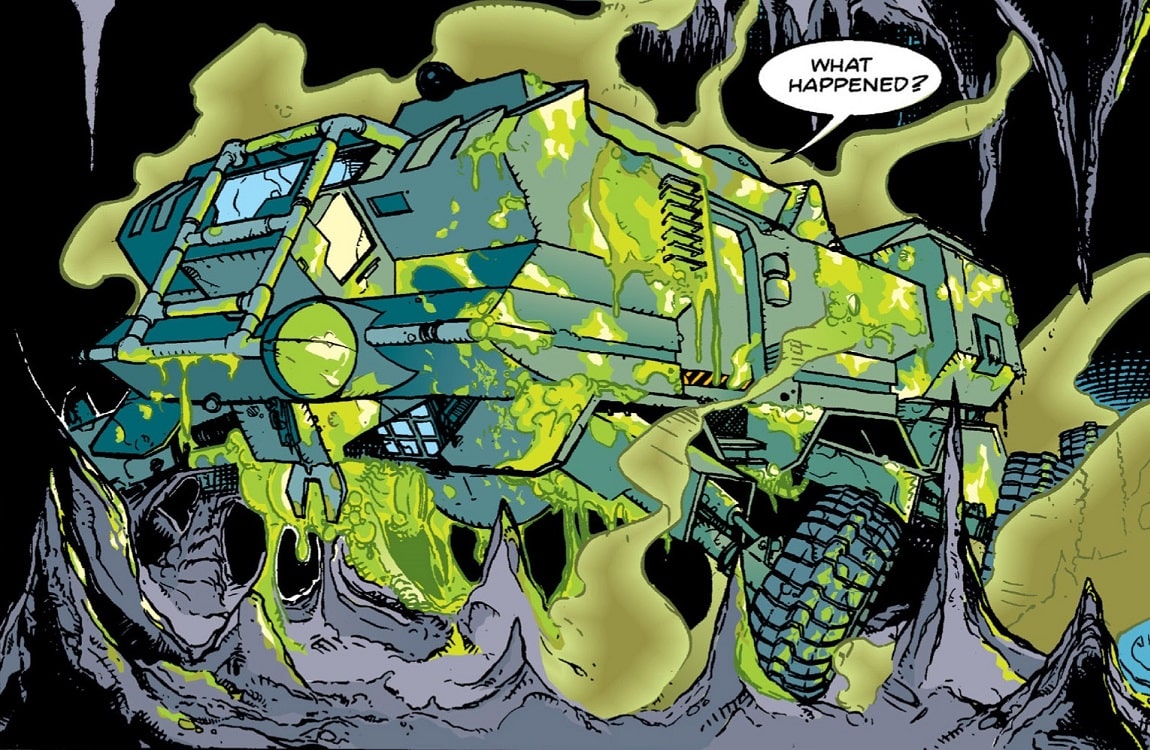 The Troop Transport Vehicle from the beginning of Aliens: Labyrinth isn't given an exact name, but it is one of the few occasions in the comic books where a new Colonial Marine vehicle is introduced. The transport acts as an APC, carrying a squad of marines to combat. However, it is able to traverse very rough terrain with its six wheels without worrying about blowing the transaxle. The vehicle doesn't have any weapons but is able to provide limited acid resistance. The vehicle is possibly built by Daihotai, the same company that built the eight-wheeled surveying vehicles on LV-426, one of which was used by the Jorden family in Aliens. 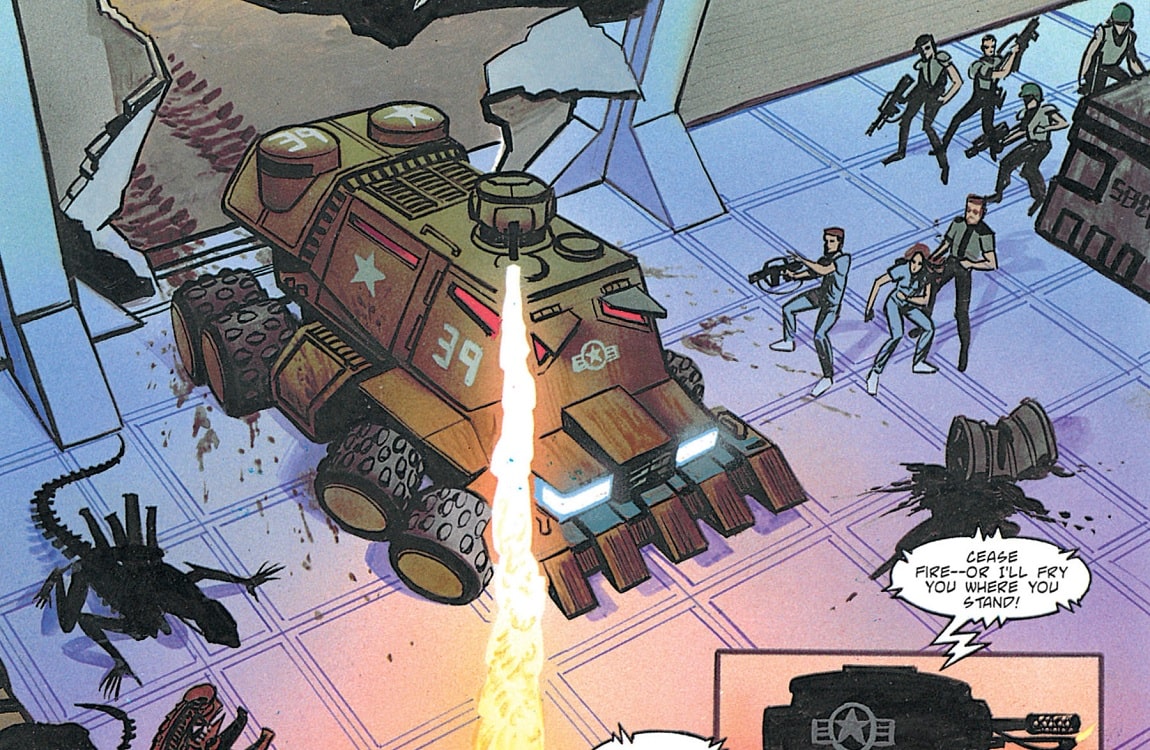 The Flame Tank made its only appearance in the acclaimed Aliens: Nightmare Asylum comic. In addition to the flame turret on top, it had a battering ram in the front. The mad General Spears used it to smash through a steel door and suppress the Xenomorphs who had escaped on Third Base, a secret research facility. He then threatened to execute Wilks and Billie (alternate versions of Hicks and Newt) who had a part in the chaos happening on the base. The design of the tank resembled the Troop Transport Vehicle, with seemingly rubber tires. Perhaps the tires were acid and flame resistant, but a tank with threads would have been more useful. 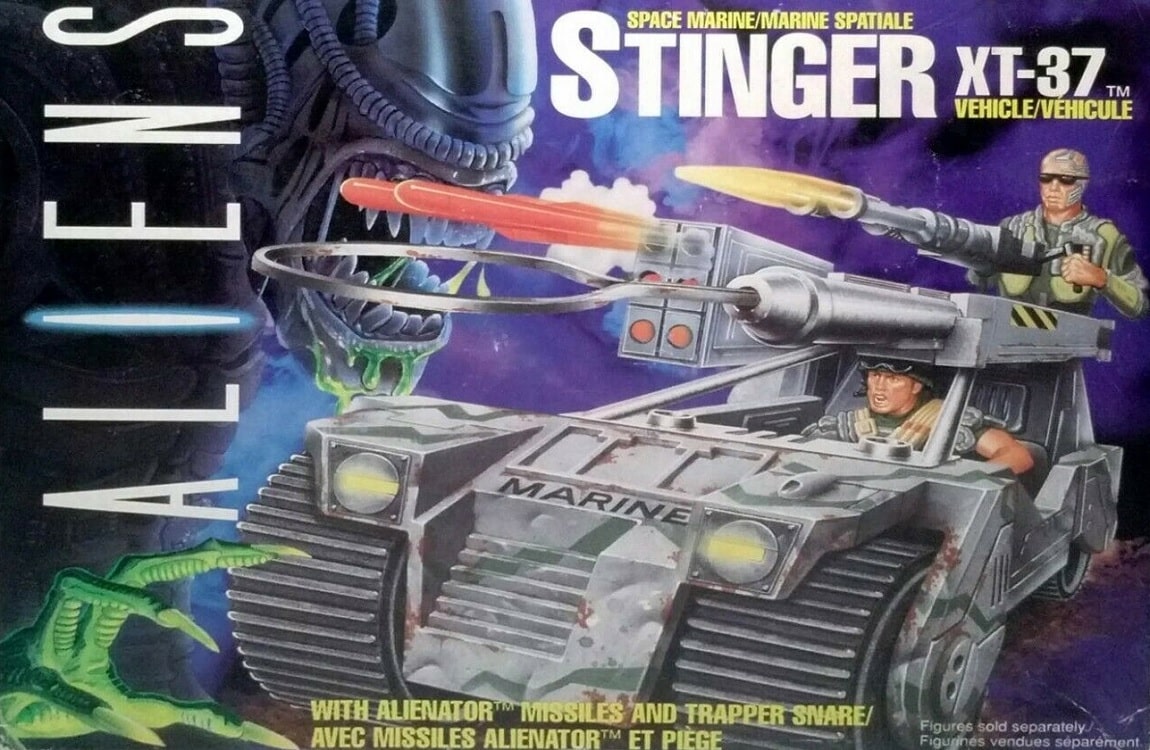 The Colonial Marines received some extra vehicular firepower from Kenner, who released the Stinger XT-37 armored assault vehicle as part of their Space Marines line. The Stinger XT-37 was armed with a 50mm injection-cooled cannon, Alienator missiles and a hydraulic Alien trapper snare, all manned by the peace-loving Bishop android. Arguably, the trapper weapon seems more like something the Weyland-Yutani bio-weapons division would love to employ. Corporal Hicks was at the wheel of this quick hit-and-run vehicle. NECA has remade many of the Kenner Alien and Predator figures, so this remains a possibility in the future.