The Colonial Marines are present in many Aliens comics, often serving the role of cannon fodder to be killed off by the Xenomorphs. In some of the Alien vs. Predator comics, they even square off against the Yautja. Here is a list of the best Colonial Marine comics spanning over 30 years, including stories where they play a more prominent role. 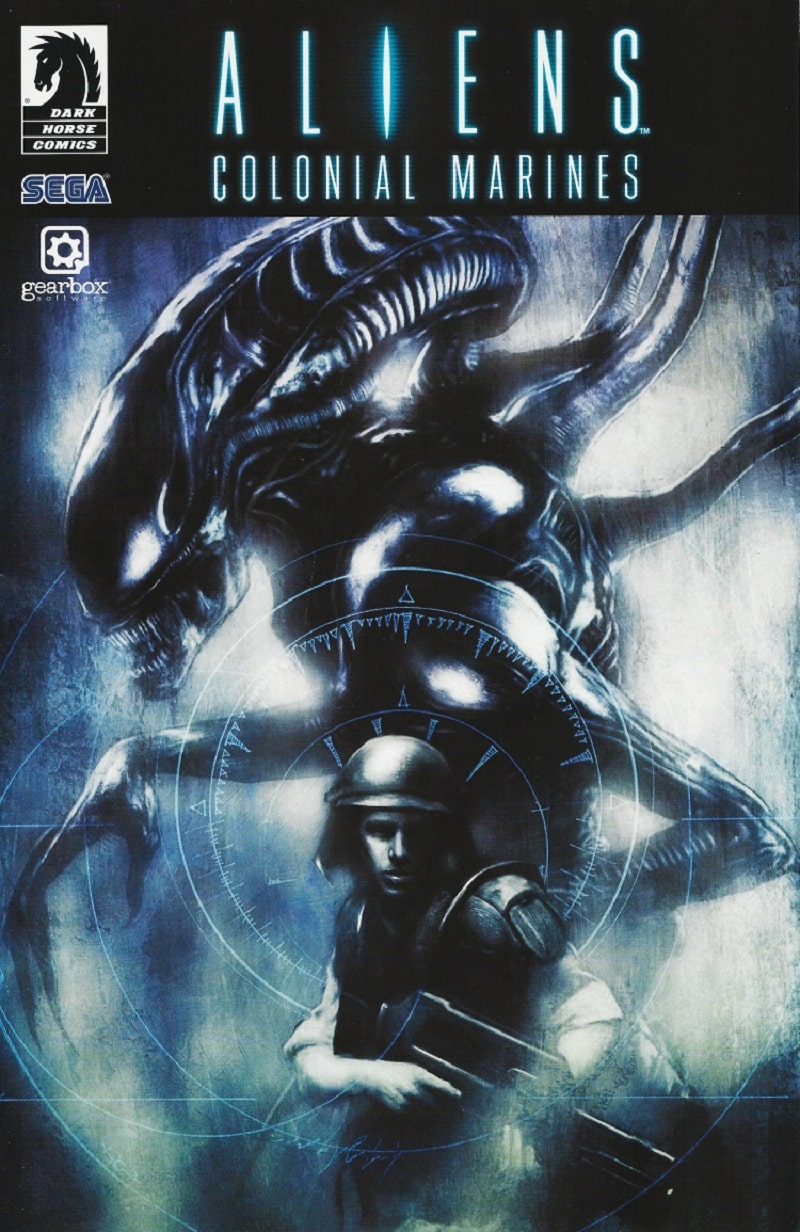 Aliens: Colonial Marines - No Man Left Behind is a rare comic released together with the Colonial Marines video game by Gearbox. It served as a short and action-packed prequel to the game and introduced some of the characters on board the USS Sephora. In the comic, the USS Sephora was mysteriously infected by Xenomorphs (instead of the Sulaco), and O'Neill (the smartgunner marine from the game) together with a medic nicknamed "Doc" tried to save some of their fellow marines from another section of the ship. As marines were killed around him, Doc had to step up and start using weapons himself, seemingly ditching his medic specialty and becoming a regular marine at the end. The comic isn't that great but it has become a rare collector's item that is very difficult to acquire. 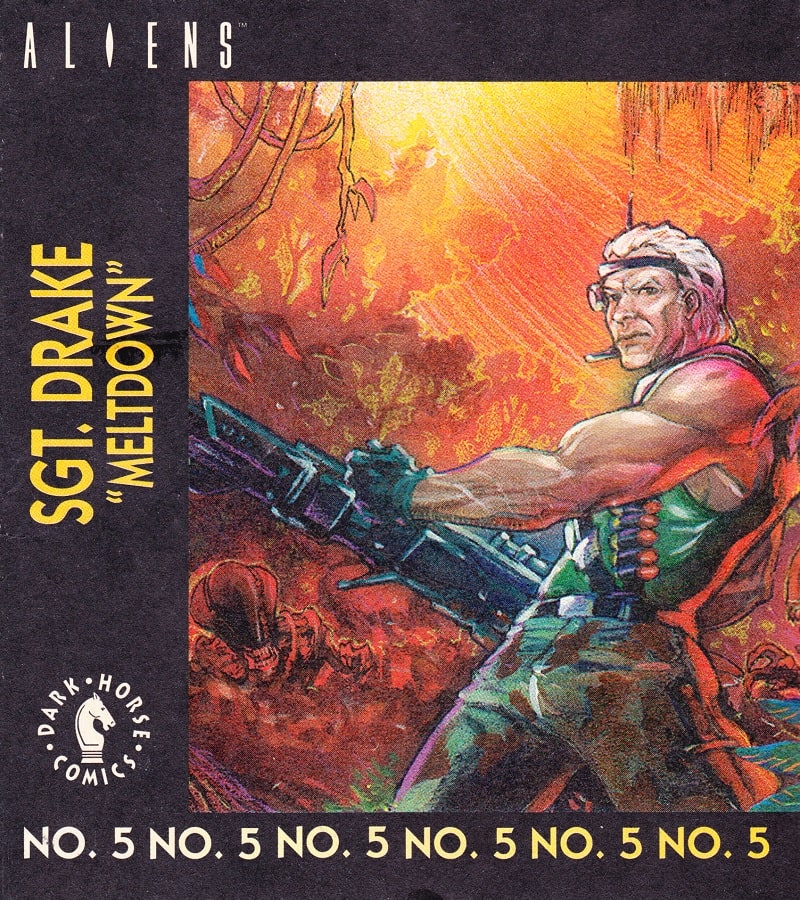 Aliens: Space Marines were small comic strips that were attached with Kenner's Colonial Marine and Alien figures, released in the 80ties. These are the most fun and colorful of all the Colonial Marine comics, and targeted mostly at a younger audience. The series even managed to resurrect most of the marines from Aliens, including Drake and Apone. As Hicks and Ripley had not died yet in Alien 3, their inclusion here is just another alternate fate for them. The stories in the 12 part series were short and action-packed, with the group of marines usually fighting an exotic Xenomorph type, like a Rhino Alien or a giant facehugger. The Aliens: Space Marines series was finally collected in the Aliens: The Original Years Omnibus, released in 2020. 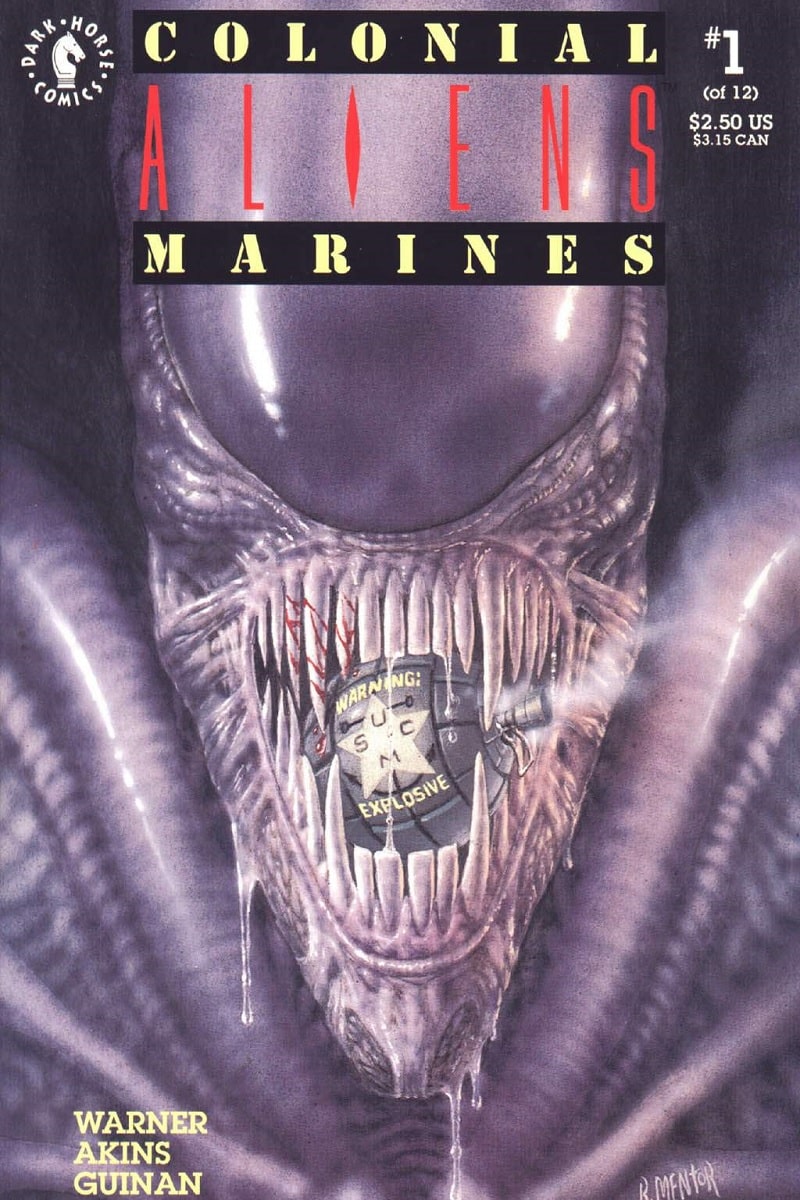 Although Space Marines was released before, Aliens: Colonial Marines was the first comic series named after the beloved soldiers. It was another fun and colorful story, which described the adventures of a misfit team of Colonial Marines under the command of Lieutenant Henry. However, the series took a darker turn as it went on, becoming more weird and disjointed in the process. This was mostly due to the fact that the comic was ended 2 issues sooner, and had to wrap up quickly in the 10th issue. Instead of ending on a cliffhanger to allow future stories, the writes killed off all the characters in a space station explosion. One of its strangest additions to the Alien lore are the mutated bugmen and survival of Dr. Ernst Kleist from Aliens: Rogue.

Aliens: Rescue is the last in the series of Dark Horse comics concentrating on Zula Hendriks, a former Colonial Marine and friend of Amanda Ripley, the daughter of Ellen Ripley. In this comic, Zula and Amanda teamed up with Alec Brand, a survivor of Aliens: Resistance and a newly joined Colonial Marine. Together they tried to find more evidence of the illegal research of Xenomorphs by Weyland-Yutani and battle hordes of Aliens. The four-part comic series feels a bit rushed and probably had to end quickly because of the rights moving to Disney and the allegations of misconduct of the writer, Brian Wood. The Colonial Marine members in the comic don't say much and are indistinguishable, except for the 3 main characters. 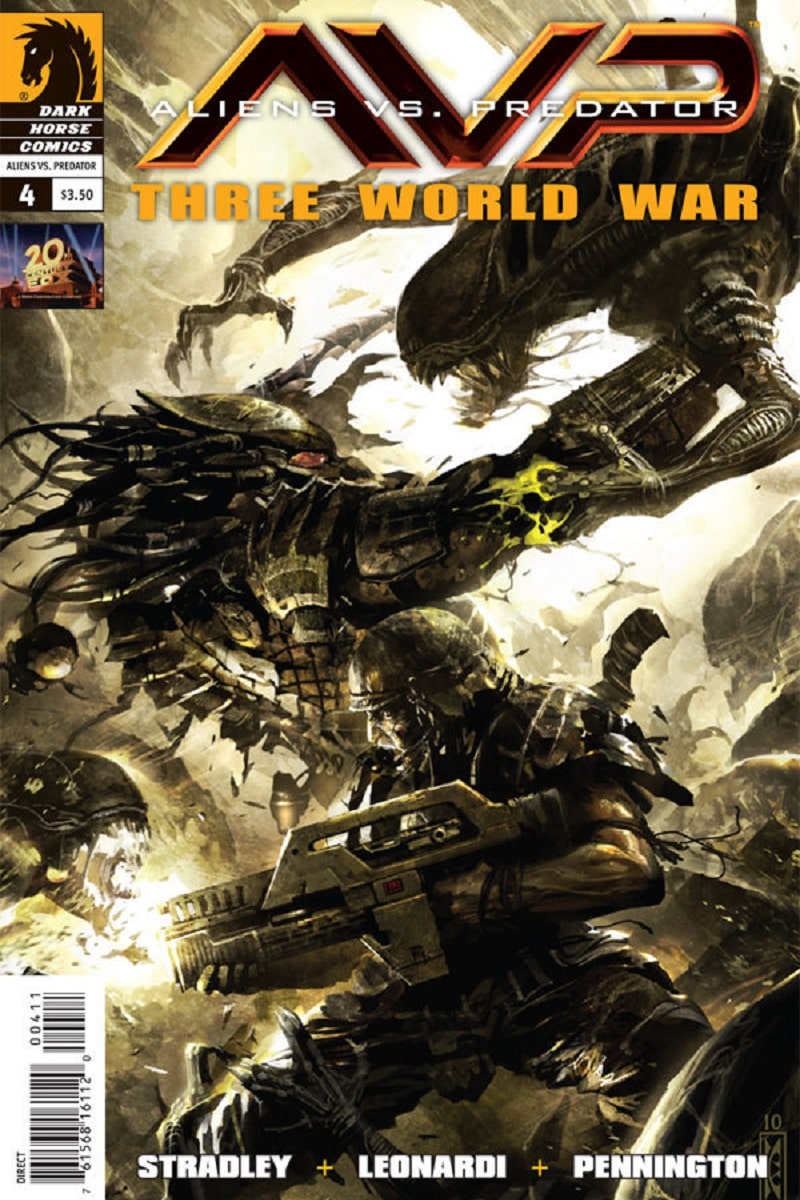 Aliens vs. Predator: Three World War contains the biggest Colonial Marine force ever assembled in the Alien comics, with several Conestoga class warships attacking at once. The comic features great artwork and has one of the best covers in the entire series by Raymond Swanland. In the story, Machiko Noguchi joined up with Colonial Marines and the Jungle Hunter clan of Predators to take down the Bad Blood Killer clan. Together they captured an Alien Queen from Ryushi, the planet from the first Aliens vs. Predator comics. The Queen was then brought to Caparis VII to try to wrestle the control of Xenomorphs away from the Killer Predators. The result was an all-out brawl of multiple races and a spectacular showdown where the Colonial Marines prevailed. 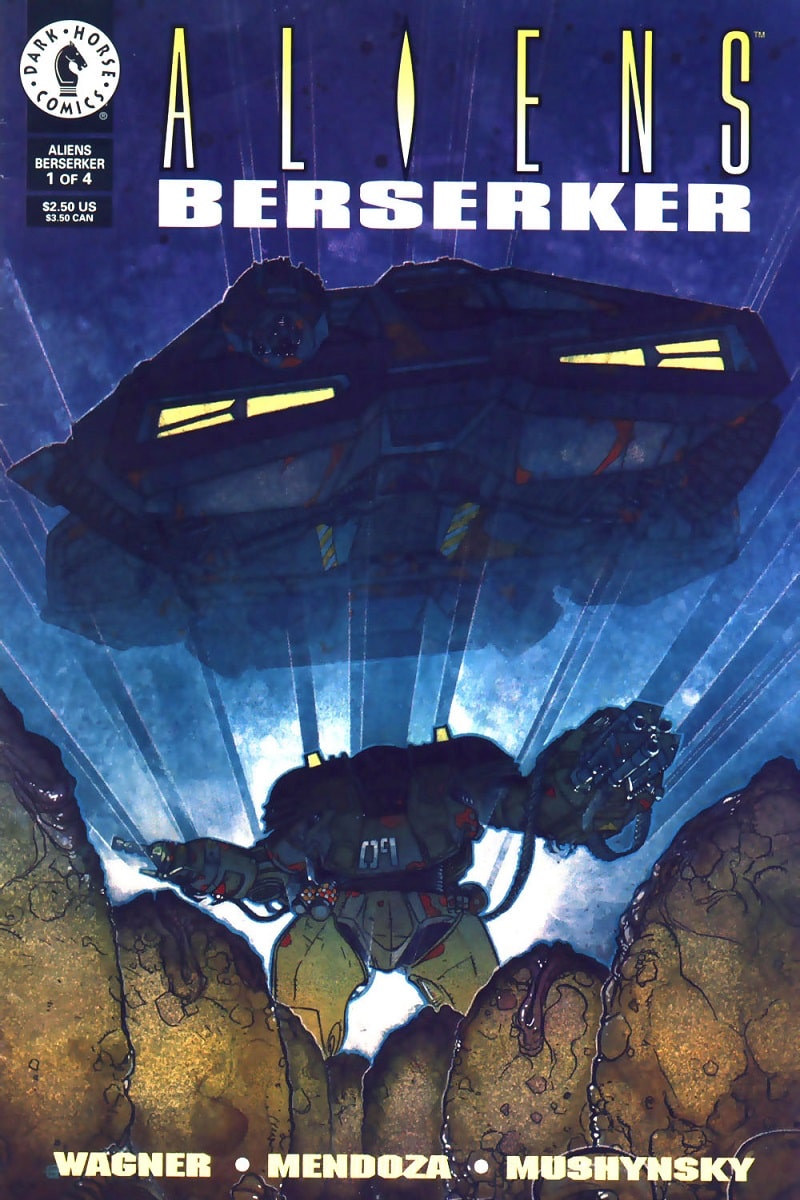 Aliens: Berserker is one of the two Aliens comics concentrating on a Berserker hunter-killer team dispatched to wipe out Alien hives with the help of a power armor mech suit. In Aliens: Berserker (also known as Aliens: Frenzy) the Colonial Marine team is sent to the space station DS-949 to wipe out one of the largest known Xenomorph hives. When their commanding officer betrayed them, they lost about half of their numbers to escape the Xenomorph swarm. A technician named Ellis stepped up and took control of the MAX mech suit, risking his life because of the strain the suit had on the human mind and body. The survivors made it out of the station in a dropship and had further adventures together with Machiko Noguchi in the Aliens vs. Predator: War comic. 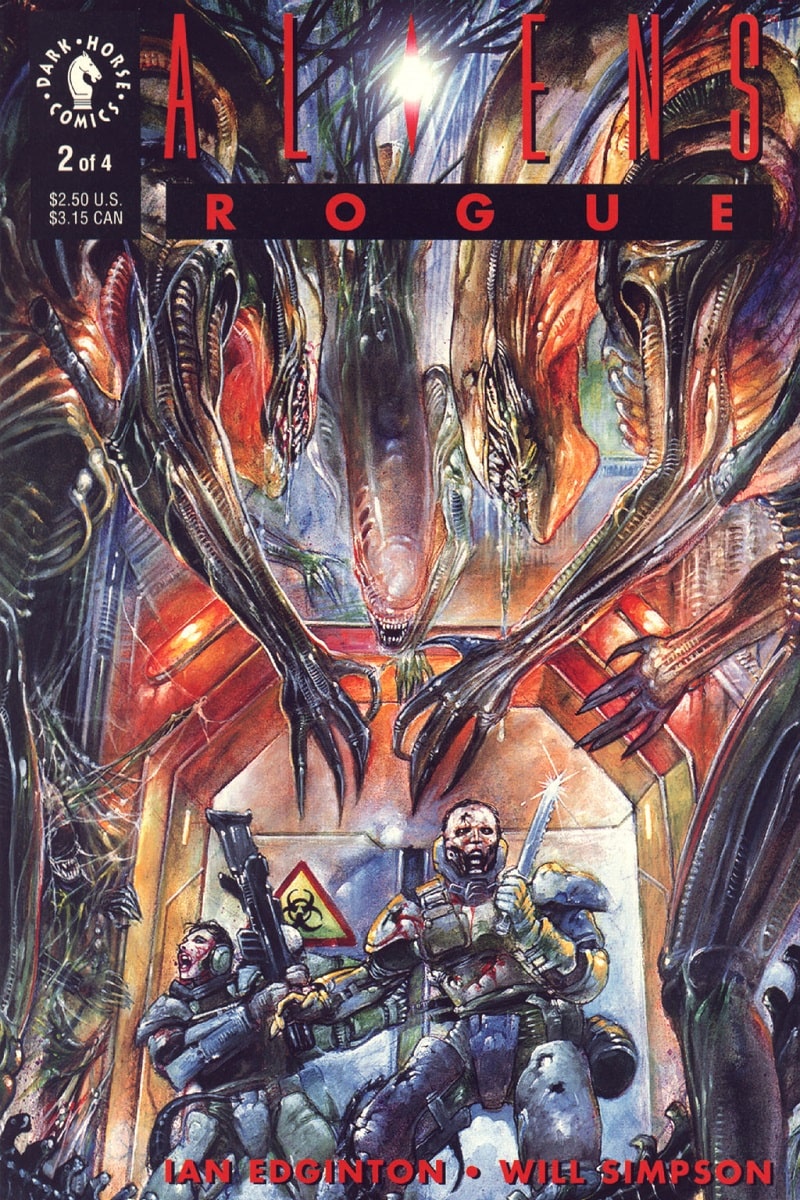 The Colonial Marines weren't the main focus of Aliens: Rogue, but they played an important role. In the story, the marines were stationed on guard duty on Charon Base, a research station on an asteroid under the command of Sargent Green. When the mad doctor Ernst Kleist created the Alien King as one of his crazy experiments, all hell broke loose on the base. The marines were betrayed by forces loyal to the doctor but managed to overcome the odds and help civilians escape the base. The novel based on the comic is even better and makes the marines more competent - most of them die in the comic but almost all make it out alive in the book. 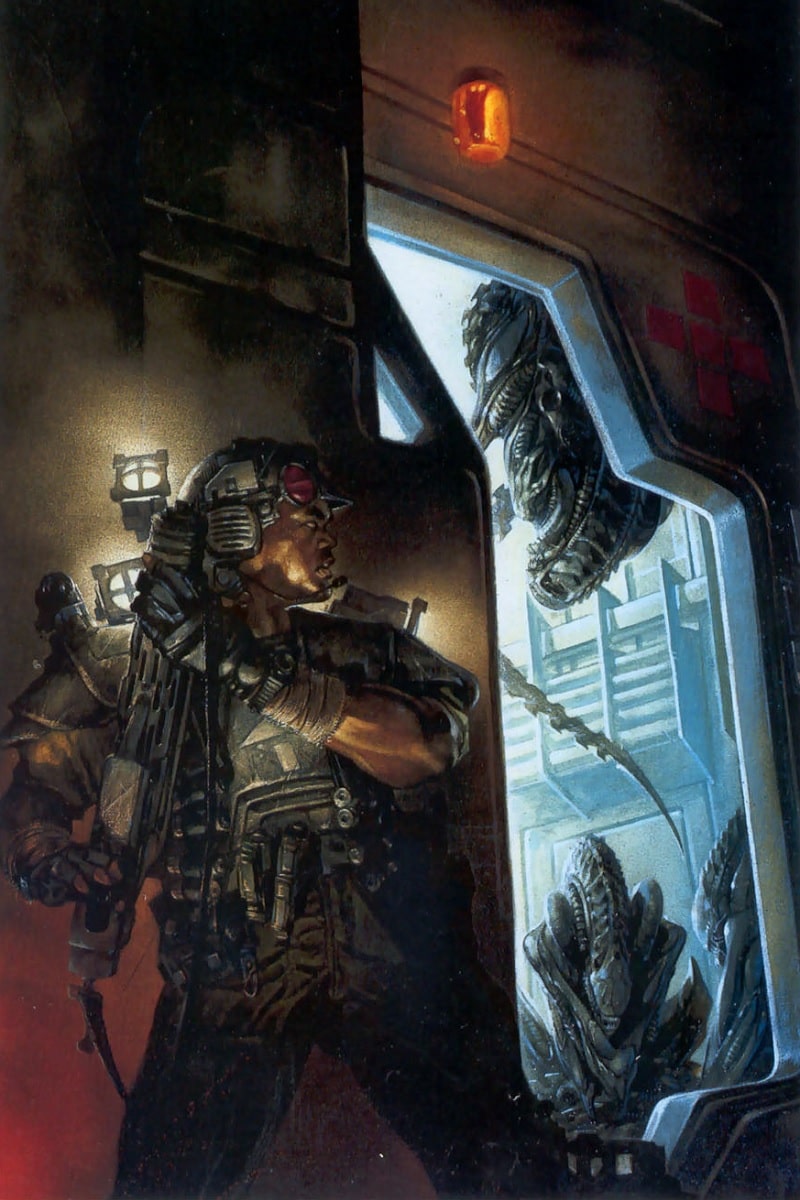 Aliens: Tribes is not actually a comic book, but more like a graphic novel. It reads like a book, but on every second or third page is filled by great artwork by Dave Dorman. The story is about a Colonial Marine berserker squad being sent to a medical facility infested by Aliens. As in Aliens: Berserker, a mech suit (this time a MOX armor) was used to rip apart an Alien hive and kill the Alien Queen. However, things didn't go so smoothly as the marine operating the suit went crazy and started to destroy the station itself. Both the artwork and storyline are gritty and atmospheric and it's set apart from the first colorful incarnations of Colonial Marine comics. 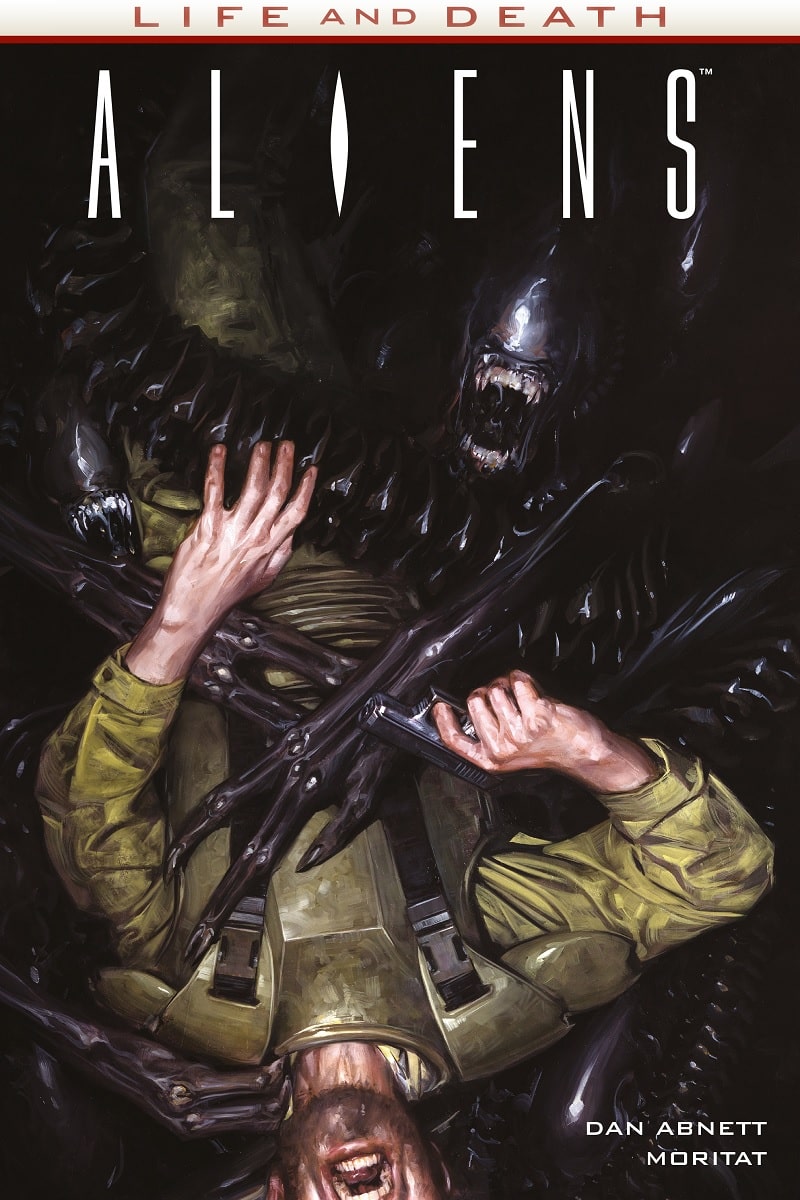 The Colonial Marines fighting Yautja happens mostly in the Aliens vs. Predator video games, and a few times in the comics. The epic Life and Death series contains several of these fights, with the marines taking down some legendary Predators based on old Kenner figures. The comic series is a sequel to the Fire and Stone saga, but is much more coherent compared to it. It focuses solely on the Colonial Marines sent to rescue the few survivors from the first series, and their exploits against the Yautja, Xenomorphs and even Engineers. The marines are quite competent, with their experienced leader Captain Paget being a great contrast to Gorman from Aliens. The series ends on a cliffhanger, but as the comic rights moved to Disney, a sequel is probably never happening. 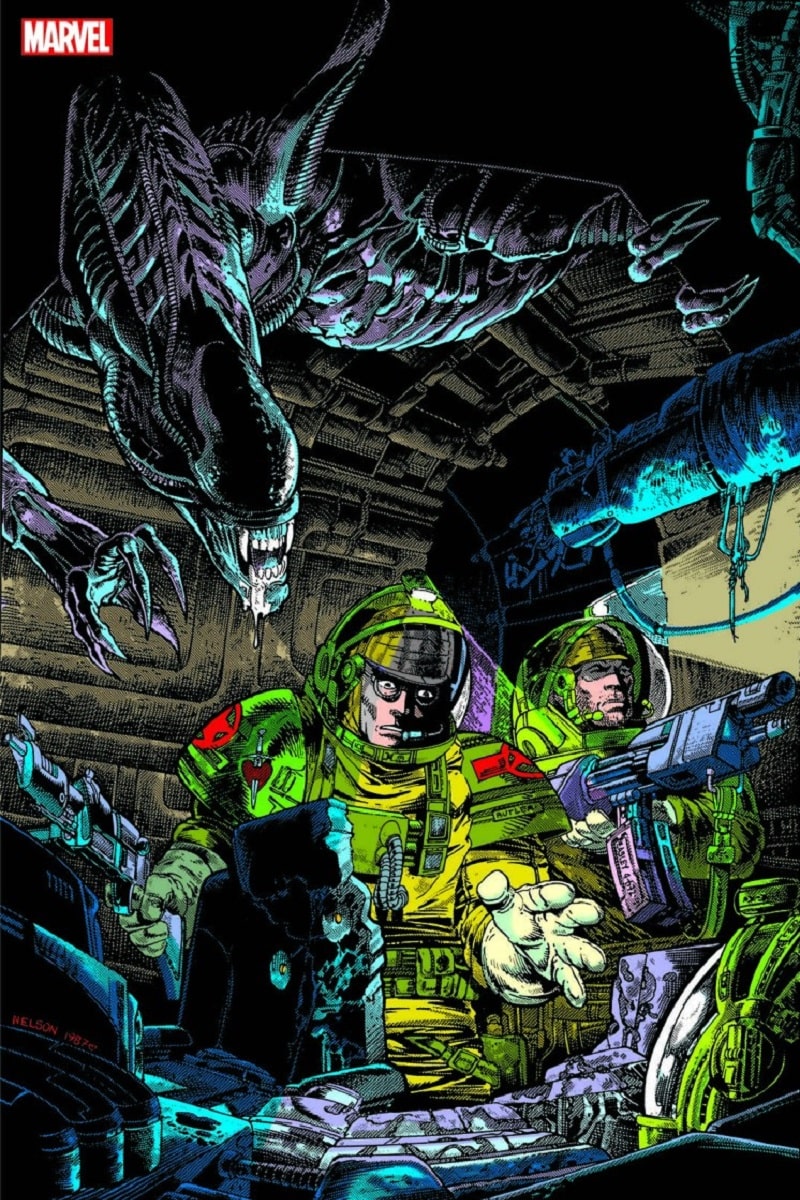 Aliens: Outbreak and its two sequel series, Nightmare Asylum and Female War, were the first Aliens comics ever and also the most famous ones. Although the series focused on the alternate fates of Hicks and Newt after Aliens, Colonial Marines played an important part. In Aliens: Outbreak, the Colonial Marine Corps funded a mission to Xenomorph Prime headed by Corporal Hicks (named Wilks in some incarnations of the story). Before the mission left Earth, Hicks broke Newt out of an insane asylum and took her with him. On Xenomorph Prime, most of the marines were revealed to be combat androids and were killed by the Xenomorphs. The comic had great artwork and the likeness of Hicks and Newt was spot on. Ripley joined their adventures at the end of Nightmare Asylum.

Want to know more about the Alien vs. Predator comics? Check out the list of the best Alien comics and look over the different Predator crossover comics.