The Predator Killer mech suit in The Predator was not the first instance of weaponized mech suits being used in the Alien vs. Predator universe. We take a look at several different mech suits and power armor from the movies, games and comic books. The mech suits are ranked by their usefulness in combat, the power of their weapons and resistance to acid and other combat damage. 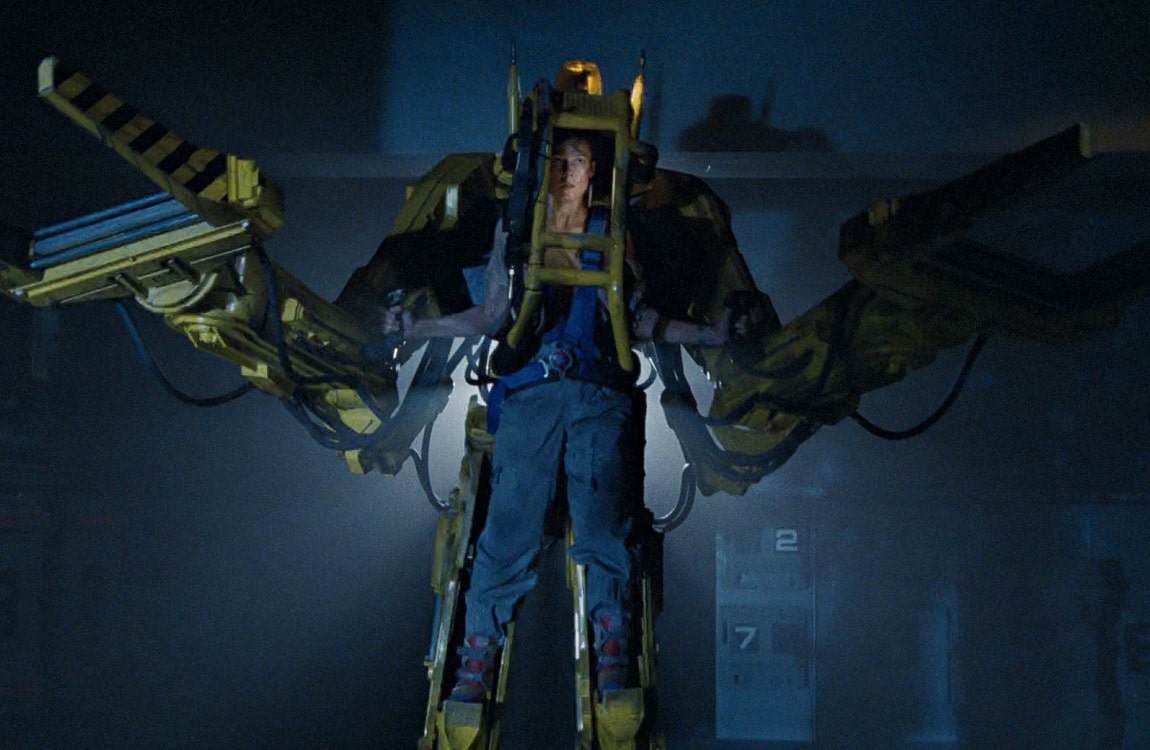 The P-5000 Powerloader was a standard issue mech suit used in construction and logistics operations produced by Caterpillar. It could also be used remotely thanks to an onboard camera without using an onboard driver. The P-5000 was also known to be used by Colonial Marines, but not directly in a combat role. It's only offensive capabilities was its welder and its powerful arms. However, several individuals have been known to use it effectively against the Xenomorphs in a last-ditch effort. Ellen Ripley used the Powerloader against the Queen Alien in Aliens and Blue Marsalis used one remotely to kill many Aliens in Alien: Cold Forge. It did not come with any acid resistance and its arms are known to break down under a lot of strain. 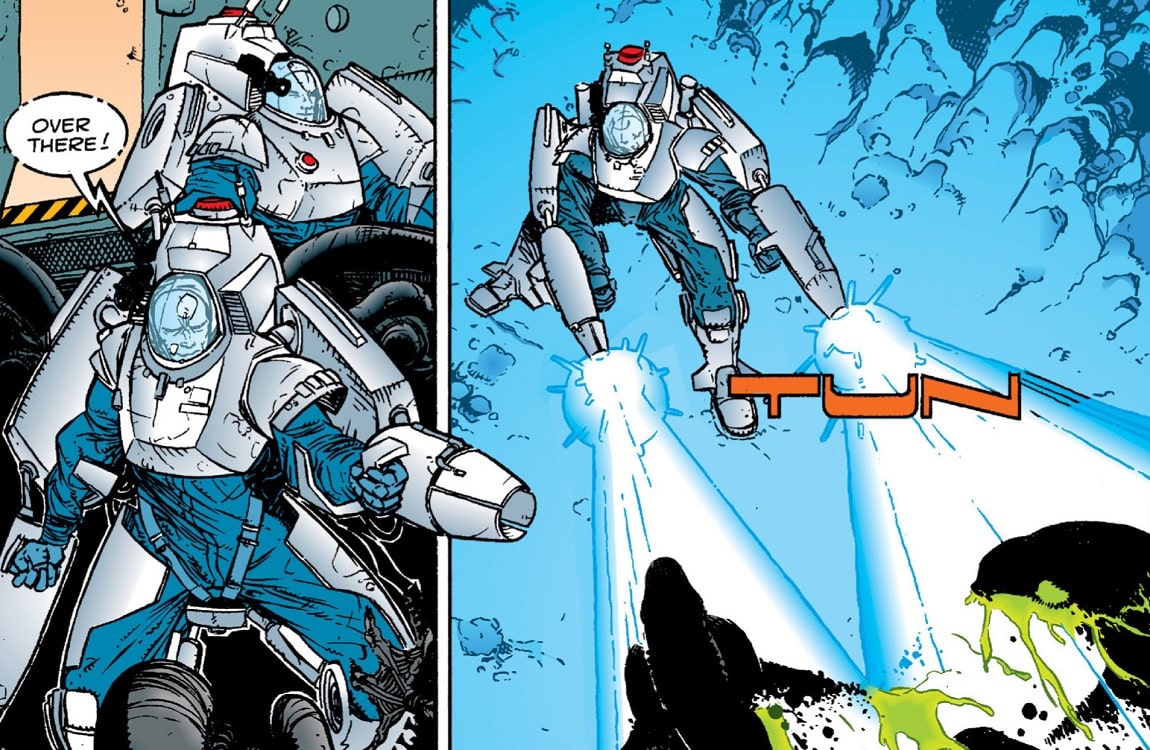 The Particle Plasma Projector Suit was an experimental mech suit deployed by the Colonial Marines in Alien hive sterilizing missions. They worked in pairs and had a support APC on standby. While their weapons melted Aliens in quick fashion, the acid protection of the suits was lackluster. Being acid resistant and not acid-proof, a big dose of acid started to slowly melt into the suits. This often leads to the mech operator to panic, start having trouble breathing and removing parts of the suit. The reaction of the operators was very similar to actual SCUBA diver panic. These suits were seen in the prologue of Aliens: Labyrinth. Col. Anthony Crespi was the sole survivor of a hive sterilizing mission, although he did not operate the suit himself.

The Pig suits were custom built mech suits used by mercenaries and space miners to clear out Alien infestations. They employed flamethrowers and miniguns on the arms and proved to be very effective against large numbers of Aliens. The mech operator was partly exposed so the acid resistance was not that effective. Therefore the mechs had to keep a distance from the Aliens. The mechs worked in pairs and had to cover each other's backs. Although the mechs were useful, the downfall of the space miners often came because of their own stupidity and over-confidence, as happened in Aliens: Pig. 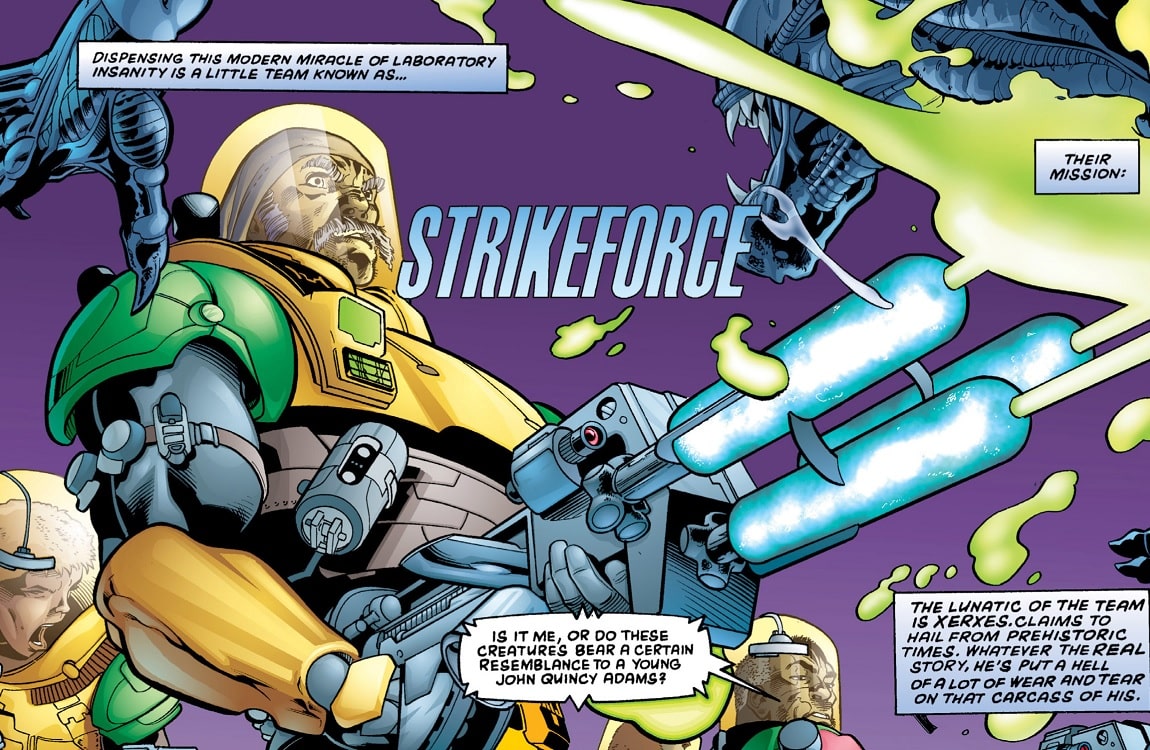 The Strikeforce units were special squads formed by Weyland-Yutani for search-and-rescue missions. Their members were often former Colonial Marines. The suits these units deployed had good acid resistance but were otherwise rather lightweight and not heavily armored. The suits were equipped with a green concoction nicknamed "The Juice" and "Bug Spray". Completely toxic to the creatures, it turns their metabolisms against them, so they are basically being eaten alive by their own bodies. One of the most famous missions of the Strikeforce unit was the reclaiming of Salazar VII, the once thriving colony world. These events happened in the Aliens: Xenogenesis comic book. 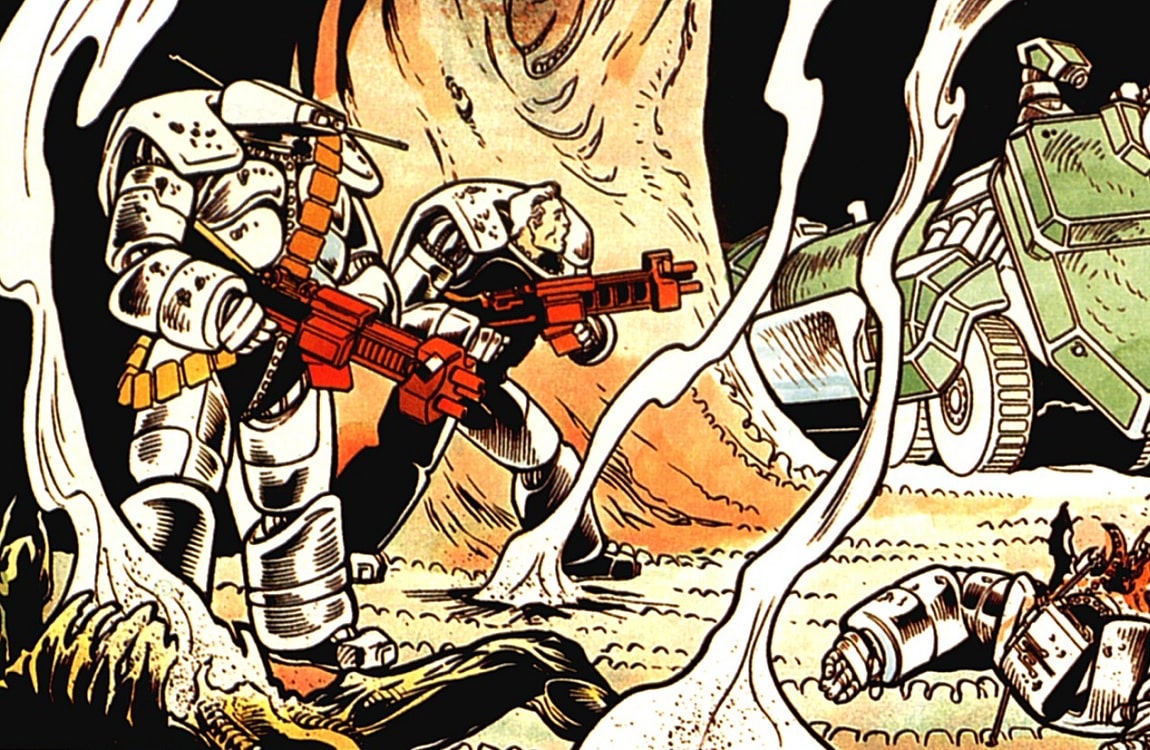 Before the events of Aliens: Genocide, efforts to produce an armor resistant to intense acidity of the alien blood proved impractical. The moment the Alien blood touched the Z-110 wardrobe, the acid is eliminated altogether. The suit was lined with gelatinous substance can neutralize the acid, giving it the PH balance of water. The suit came with no built-in weapons but the suit gave the wearer the ability to yield much bigger and heavier weapons than without it. The suit was mainly used by Colonial Marines on the Xenomorph Homeworld during a mission to bring back Royal Jelly. Many Z-110 users chose to use it without a helmet and several paid with their lives for that. 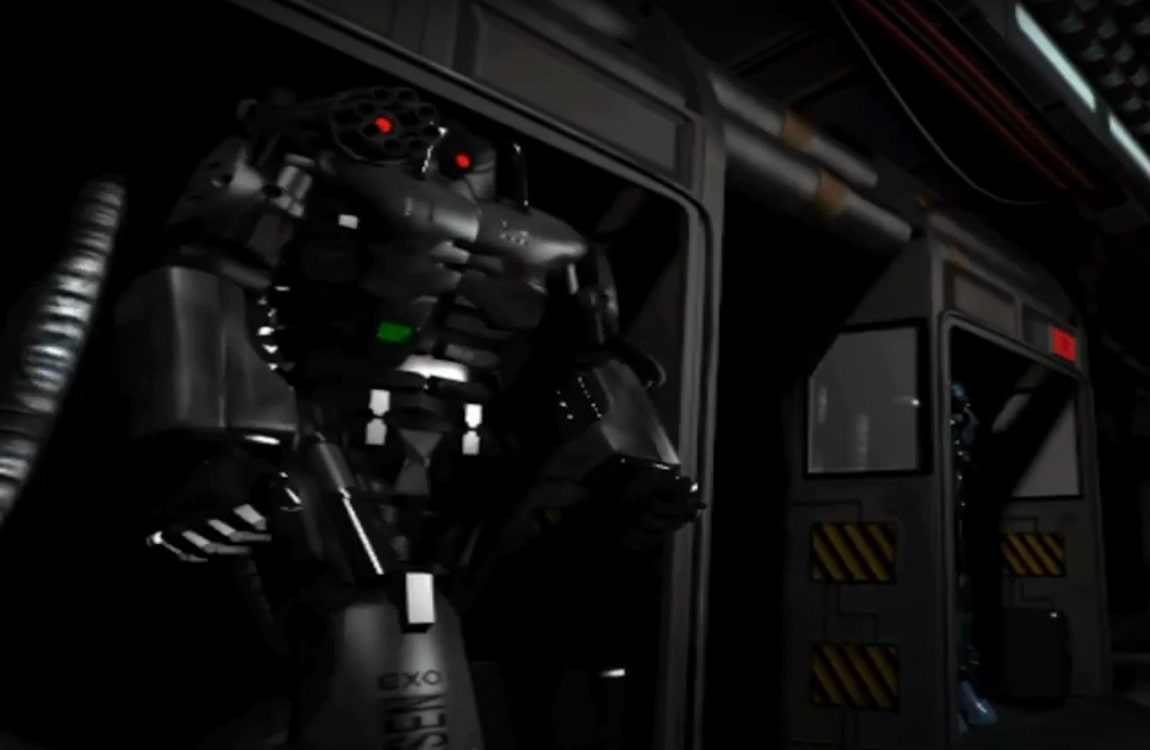 The Command Type Heavy Exoskeleton was the leader of a 4 member Colonial Marine team. The other mechs in the team were MK4 Maintenance, the MK2 Communication and MK3 Light Exoskeletons. The Command Type Heavy was enhanced with strategic software and a shoulder mounted gatling laser. All these 4 mech suits appeared in the Aliens: Comic Book Adventure and the team was led by Lt. Colonel Hendricksen, an experienced Colonial Marine and the main character of the game. Unlike many of the other mechs in the list, the Exoskeletons were very agile and allowed the operators to make big jumps. The suits appeared formidable in combat against the Aliens and all members of the team survived their "adventure". 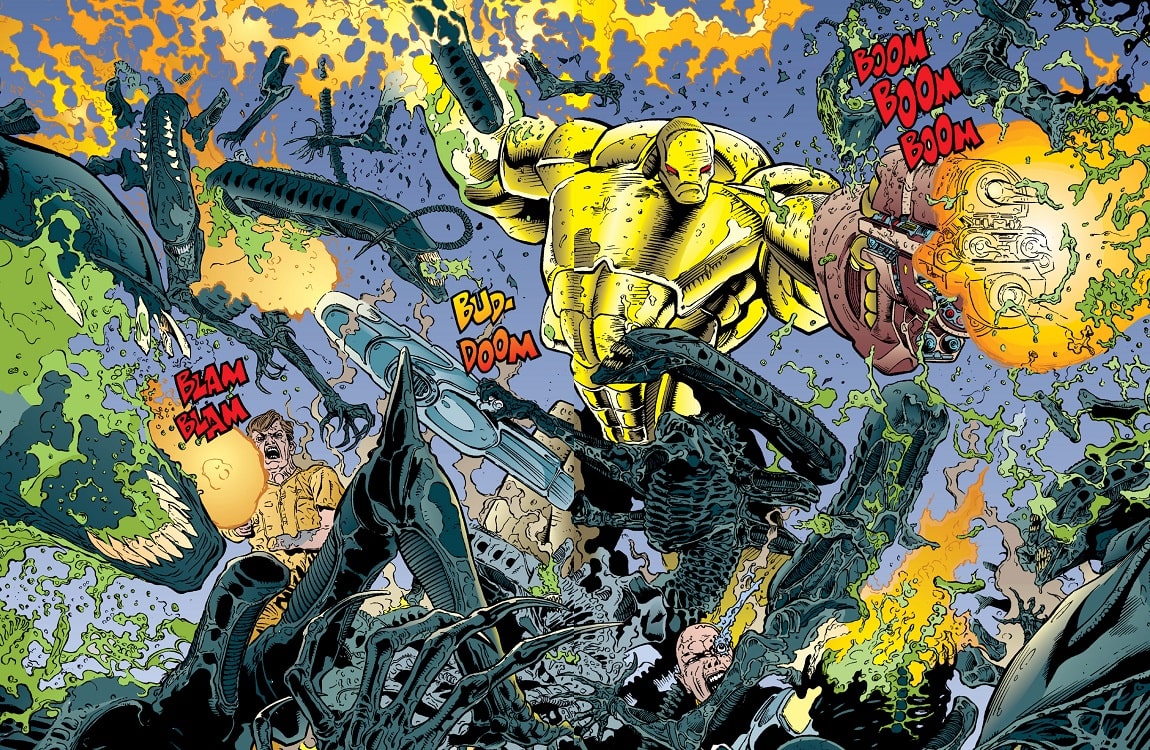 Dean wasn't a mech suit per say, he was actually an armored android. Dean was custom built under the supervision of Professor Nordling on a secret research base. He had a three-ton titanium exoskeleton, fully armored and covered with neutra-gel for acid resistance. Being an android, he probably had white blood and organs underneath his combat chassis. So theoretically it should be possible to retrofit that kind of suit to a human being as well. Dean was one of the most efficient Xenomorph killers, being able to take down waves and waves of Aliens with relative ease. Dean had a built-in flamethrower on the right arm and used a hand-held plasma-rifle on the left arm. Still, Dean was overwhelmed and destroyed in the end by hundreds of Aliens while possibly running out of ammunition for his weapons. Dean appears in the Aliens: Stronghold comic. 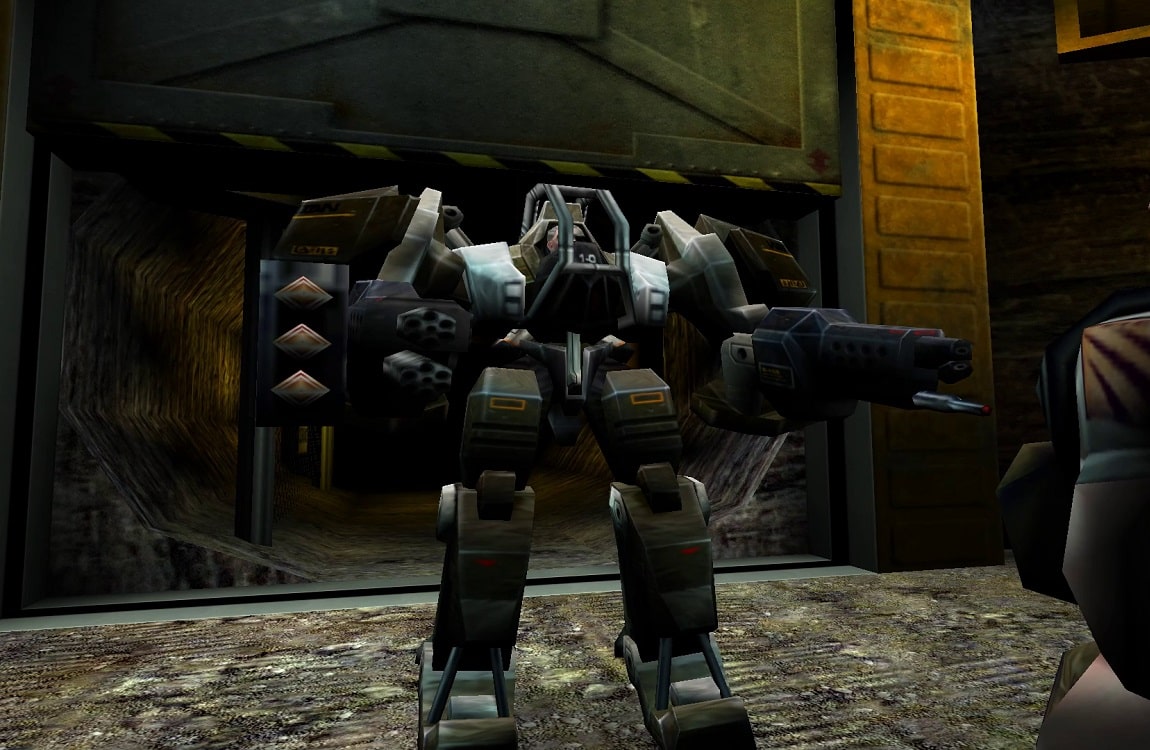 The Exosuit was an upgraded version of the P-5000 Powerloader produced by Weyland-Yutani. It was used both by Colonial Marines and Weyland-Yutani mercenaries known as the Iron Bears. It came with a flamethrower in the left arm and a rocket launcher and minigun in the right arm. The Exosuit comes in green camouflage colors, although marines have known to customize the look, like their own armor. The Exosuit was used both by corporal Andrew Harrison and General Vassily Rykov on LV-1201 with varying degree of success. The suit proved more formidable against Aliens than Predators. The Exosuit appears in the Aliens. vs Predator 2 video game by Monolith. 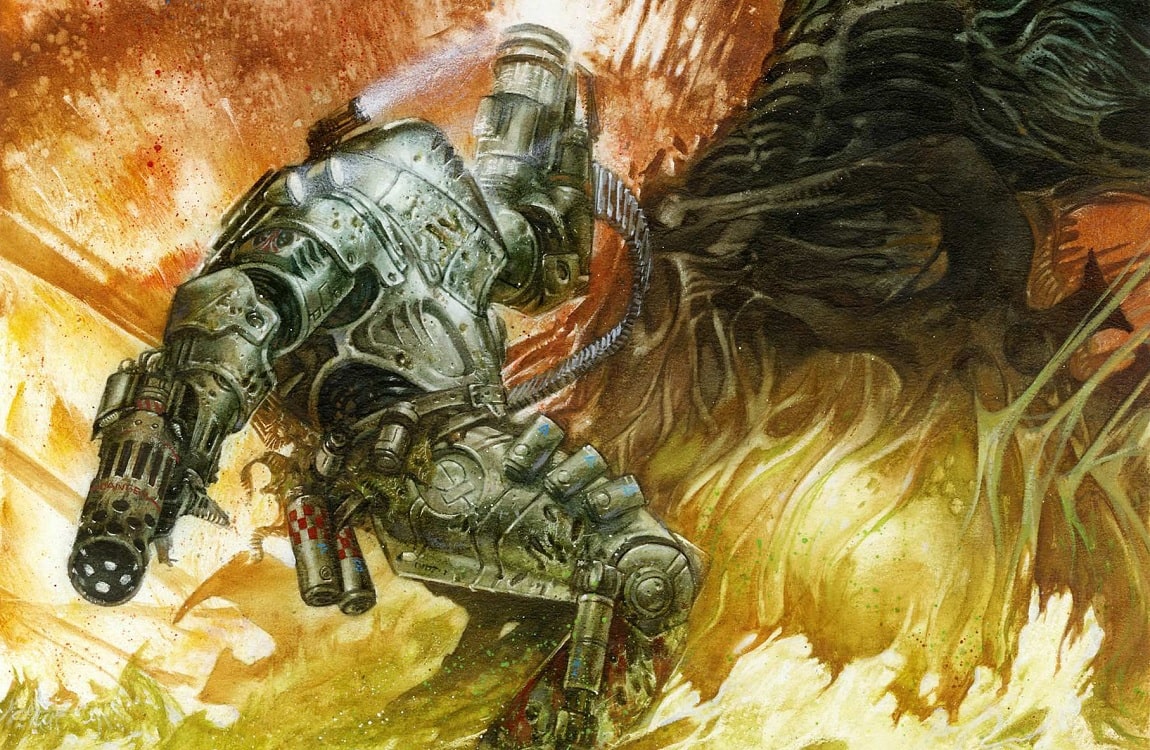 The Berserker Units were powerful cyborg combat suits first developed by the Colonial Marines to clear out large Xenomorph infestations. The MOX (Mobile Offensive ExoWarrior) units were the first experimental deployments of these units. What makes the Berserker units different from other mech suits is the neural interface and mind-altering drugs the suit administers the user. The drugs are meant to make the machine-human interface smoother and also to make the operator hyper-alert. However, the drugs would become addictive and an over-dose was also possible. The MOX units showed up in the Aliens: Tribes graphic novel, with it's most memorable member being Private Shitkicker, one of the most badass Colonial Marines ever. 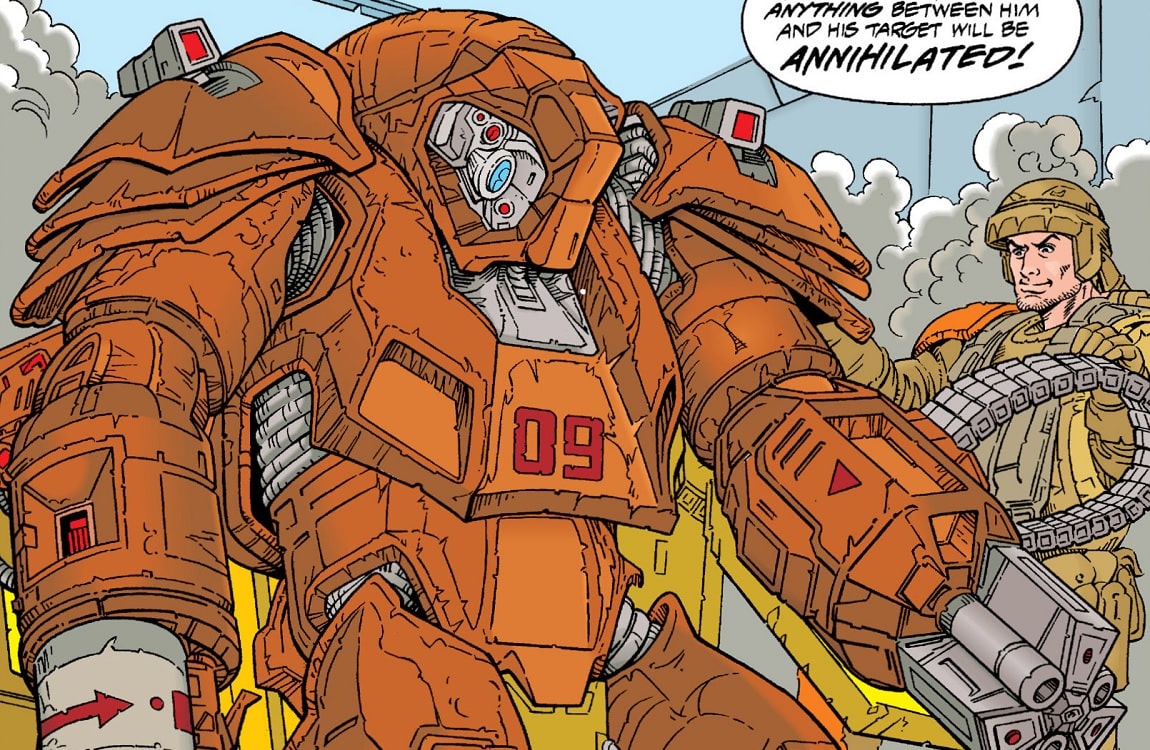 The Berserker MAX (Mobile Assault Exo-Warrior) units were later refinements of the initial MOX units. While the MOX suits were employed by Weyland-Yutani, the MAX suits were sent to combat the Aliens directly by Weyland-Yutani. Like the MOX units, the MAX suits were highly acid resistant and employed thick armor. The armaments included flamethrowers, Pulse Rifles and grenade launchers. While the MAX unit operators were closely linked their suits, it was still possible for another driver to take over the suit like happened in the Aliens: Berserker comic. When Berserker operator Max was killed on the mission to DS 949, technician Brian Ellis took over operating the suit with great success.