The Predators occasionally team up with humans due to circumstance and the need to battle against a common enemy - most often the Xenomorphs. Here is a ranking of such uneasy alliances, ordered by the magnitude of the collaborations between the two species. 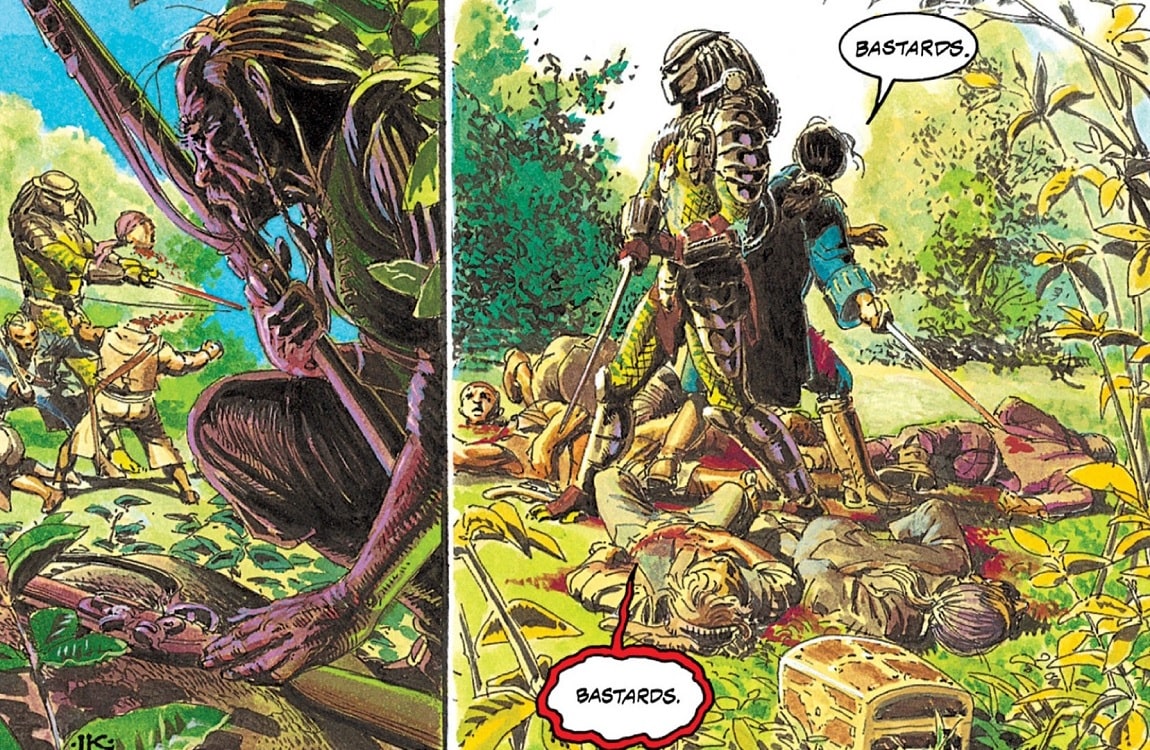 The Greyback Predator (also known as the Golden Angel) from Predator 2 had a short alliance with a human named Raphael Adolini during his youth. Adolini was a leader of a band of pirates who mutinied against their captain over an argument about what to do with a chest of gold. The Golden Angel joined the battle and fought together with the captain back-to-back. After their enemies were seemingly defeated, a surviving mutineer shot Adolini in the back. Before his death, he gave Greyback a flintlock pistol and said "Take it", mirroring the end of Predator 2. 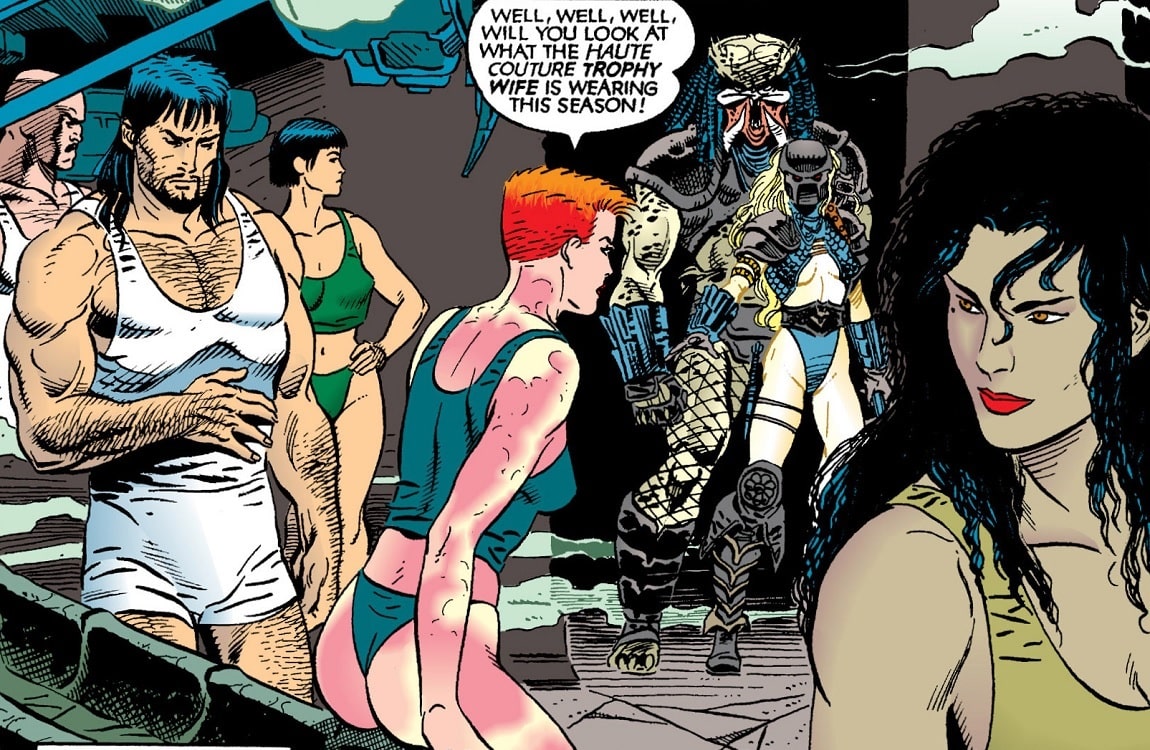 Aliens vs. Predator: Deadliest of the Species features the only known case of a three-way team-up of a Predator, human and an Alien. At the beginning of the story, the female Predator called Big Mama was hunting Caryn Delacroix, but soon joined forces with her when she was revealed to be the mysterious Ash Parnall. More human mercenaries link up with them, but there is also an unlikely alliance - the Alien Queen of Samara station also joins the band of misfits to fight against a rogue AI called Toy. At the end of the story, a human-Predator-Xenomorph hybrid is born and also shows sympathy for joining Big Mama and her allies. 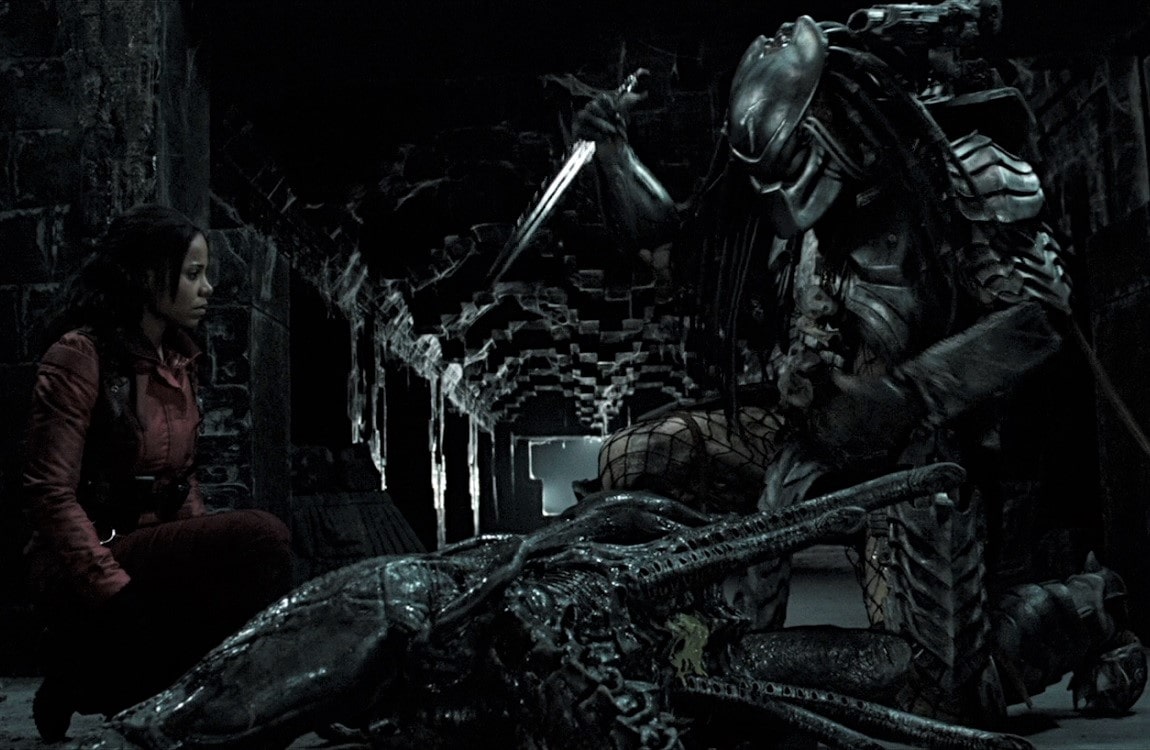 Scar Predator teaming up with Alexa Woods in AvP 2004 is one of the few cases in the movies where a Predator works together with a human. After sparing Alexa's life, Scar noticed that the woman is formidable and has killed a Xenomorph by herself. They help each other escape the temple and Scar even decided to burn the blooding mark on her cheek. Together they fight and defeat the Alien Queen, during which Scar is killed. It would have made for a more interesting ending if Alexa joined and left with the Predators at the end, mirroring the comics it was partly based on.

When Judge Dredd investigated the crimes of Dr. Reinstöt in Cursed Earth during the Splice and Dice series, he encountered a trio of Predators hunting the same man. While they had a harmless brawl at first, they quickly realized the potential of joining forces. Among other crimes, Dr. Reinstöt had sent his mutant minions to hunt and capture a fourth brother of the Predators, who was then used as a host for a Predalien. In the end, Judges Dredd and Anderson together with the Yautja caught up with Dr. Reinstöt, who had at that point mutated into an Alien Queen. He died in a fiery explosion and the remaining Predator left Earth thanking and praising the Judges for helping him. 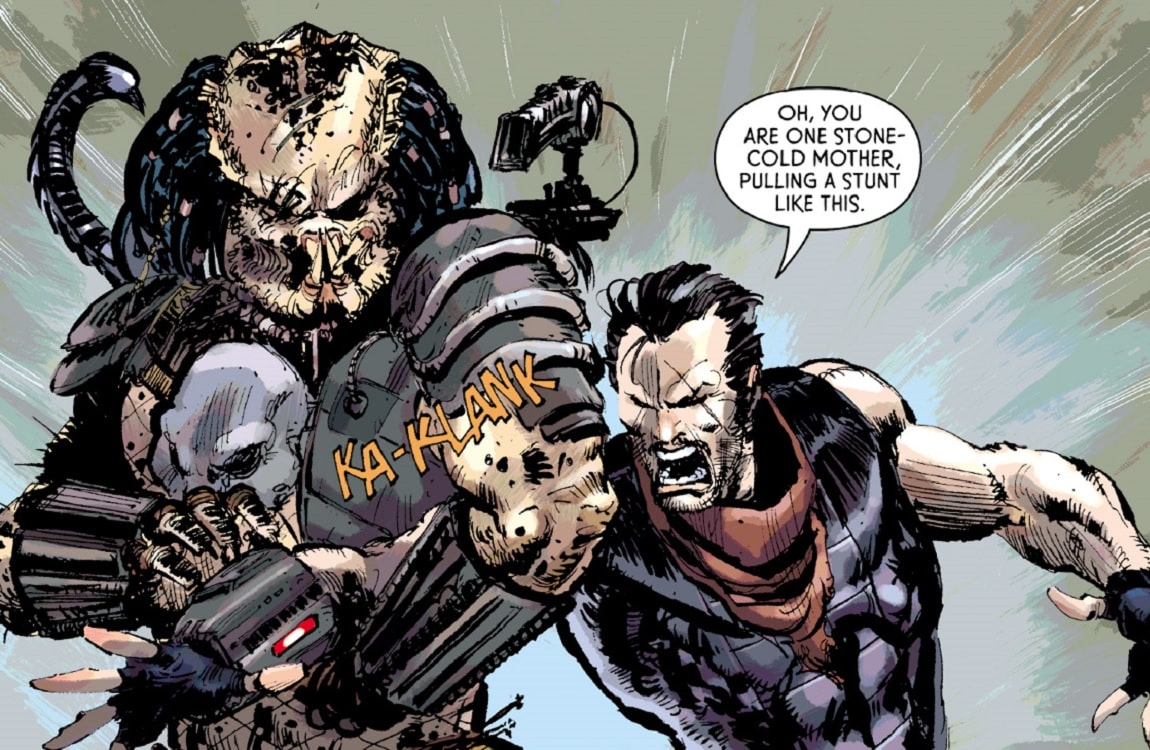 Ahab and Galgo were two rogue warriors from opposing species who joined up together to form a kind of buddy-cop duo in the epic Fire and Stone saga. At first, Ahab needed Galgo for his ship and knowledge, but later came to appreciate him as a soldier and comrade. Ahab dreamed of hunting and killing an Engineer and together they reached that goal on LV-223. After taking the trophy of the Engineer, Ahab and Galgo lived on the planet for more than a year, even establishing a settlement. In the subsequent Life and Death series, they fight more Xenomorphs and Engineers. The duo finally parted ways after Ahab found a new clan for himself. 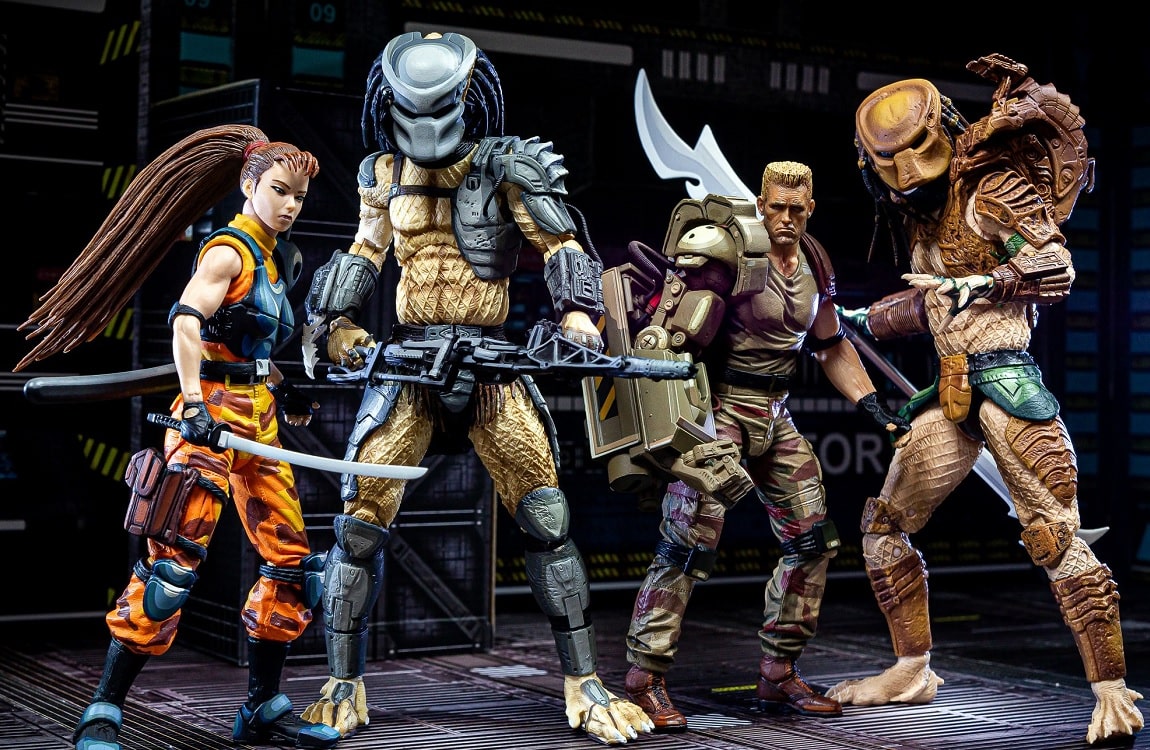 The only considerable Predator-human team up from the video games occurred in the Alien vs. Predator arcade game from 1994, although Predators have helped and spared humans in other games as well. In AvP arcade, a city in California (San Drad) was overrun by Xenomorphs escaping from a secret Weyland-Yutani facility. Leading the fight against them were Lieutenant Linn Kurosawa and a cyborg version of Dutch Schaeffer. They were joined by two Predators - Hunter and Warrior, who had come to Earth to enjoy a hunt. Together they battled waves of Xenomorphs, infested humans and even a Mad Predator. In the end, they helped clear the infestation by remotely crashing a Weyland-Yutani ship into the facility. NECA recently made some great looking figures from these characters. 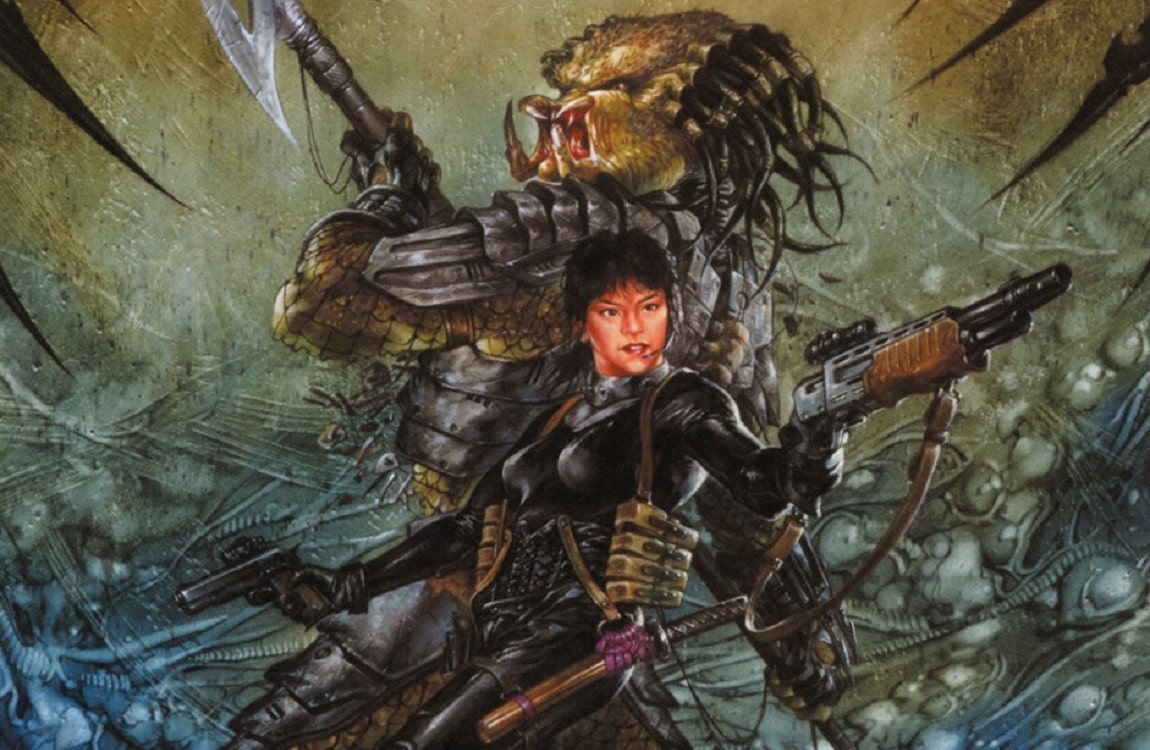 Dachande a.k.a. Broken Tusk teaming up with Machiko Noguchi to fight Xenomorphs is the first and probably the most legendary human-Predator team-up. This alliance occurred in the first Alien vs. Predator comic released in 1989. Dachande was the leader of a hunting party on the planet Ryushi when things went terribly wrong and he lost the support of his clanmates. He saw the potential of Machiko, a survivor and probably the best human warrior of the human colony. Together they fought waves of Xenomorphs and took down the Alien Queen, although Dachande was mortally wounded in the process. Dachande blooded the woman and she joined the Predators for a year of further adventures.

The Emissary Predators were cut from the final version of The Predator and would have been featured in the last act of the movie. The Predator Civil War had spilled onto Earth - the Emissaries were two Predators allied with Stargazer, and later the Loonies, against the Upgrade Predator. While we have seen humans donning Predator weapons and armor several times, this is a unique case of Predators using human weapons and even military clothing. Their scenes were filmed and some footage is seen in the initial trailers, but there is no trace of them in the movie novelization. The Emissary Predators were made semi-canon by the NECA figures produced in 2019. 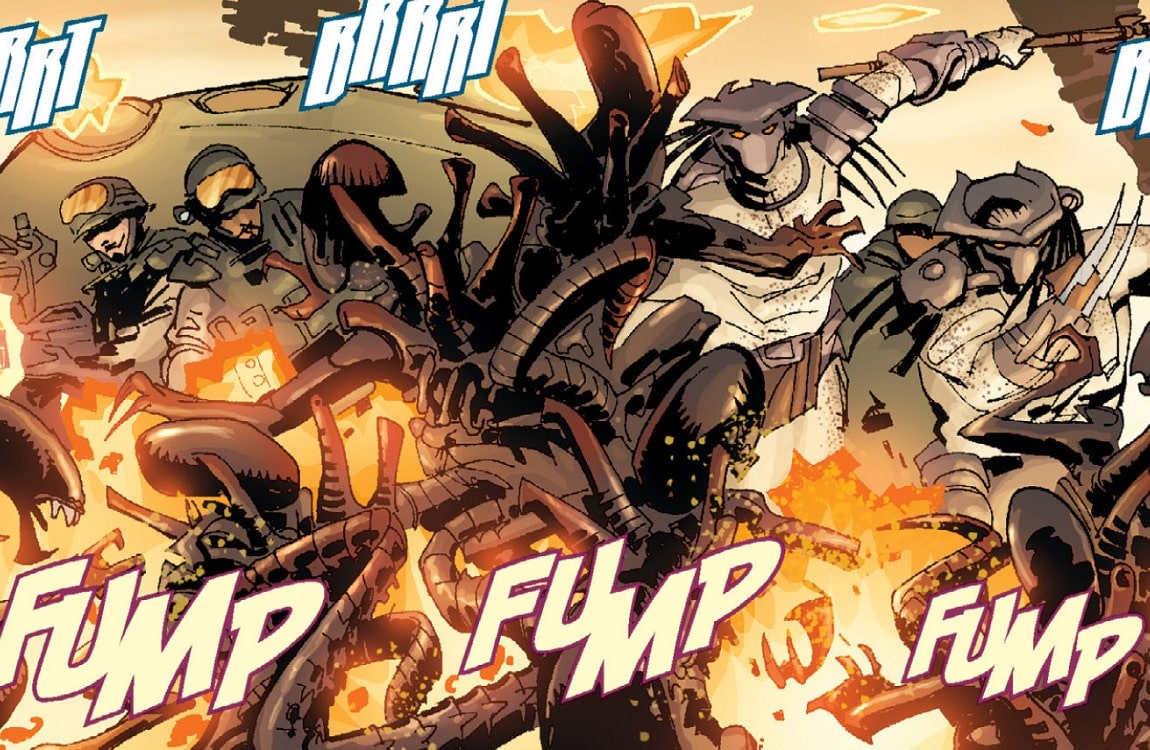 Years after leaving the Predator hunting party, Machiko Noguchi was involved with another team up of humans and Predators in the epic Three World War comic series. This time, a clan of Killer Predators was using captured Xenomorphs as war slaves and causing trouble both for Colonial Marines and regular Predators. Machiko facilitated the team up and the two sides converged on Ryushi to capture a Xenomorph Queen and use her against the Killers. After this, the shaky alliance hit a beachhead on Caparis VII with multiple ships and used the Queen to gain control back for the Xenomorphs. The Colonial Marines and Predators were victorious and the Predator Killers defeated. At the end of the story, Machiko Noguchi lost her blooding mark on her forehead, as punishment for disrespecting the Predators. 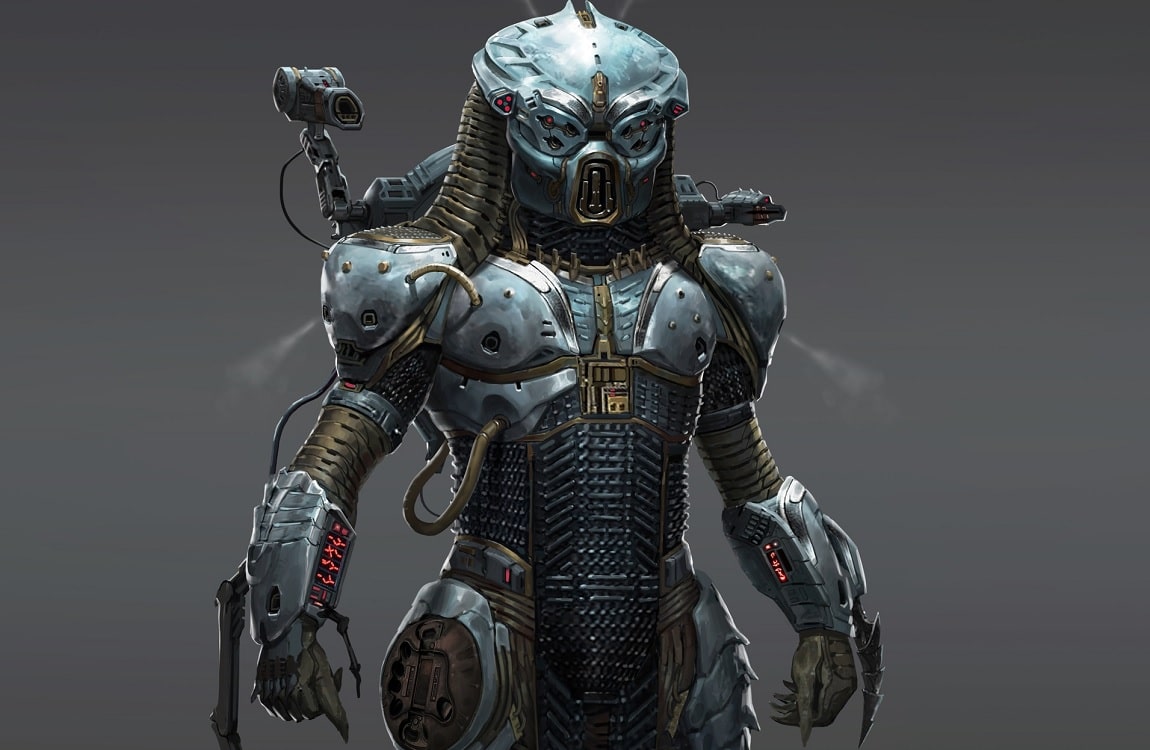 The biggest Predator-human team-up occurred during the Rage War in the 27th century, depicted in the trilogy of novels by Titan Books. Hundreds of Predator ships, including dozens of clans formally joined the Colonial Marines and Weyland-Yutani in an all-out war against the elusive Rage. The deal was brokered by Kalakta, a sort of Predator King and leader of the entire species who was thousands of years old. The Rage was an offshoot of humans who left human colonies hundreds of years prior and chose to return in advanced ships and tamed Xenomorphs to invade the Solar System. The alliance started out uneasy but became very successful as the Rage was defeated.