Although the Predators have a wide arsenal of other-worldly weapons, they sometimes resort to using human arms. This is often an act of desperation when being outnumbered and only having melee weapons available. Here is an overview of such cases, including the Yautja using M41A pulse rifles and M56 smart guns. 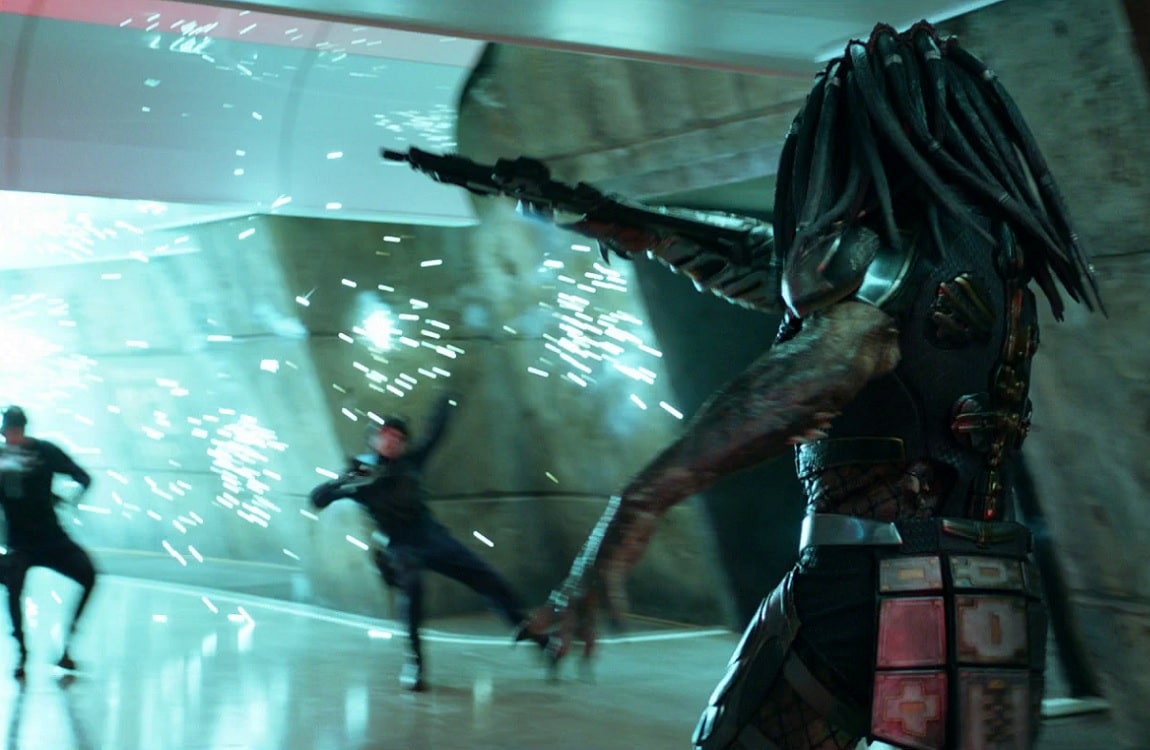 In the movies, the Predators rarely used human weapons. In Predator 2, the City Hunter disapprovingly smashed a shotgun like a toy, and the Elder Predator held an ancient flintlock pistol as a trophy, giving it to Mike Harrigan. This changed in The Predator, where the Fugitive Predator had to use the SIG SG 552 as a means to escape the Stargazer facility. He had no issue with shooting the small weapon and killing at least two security guards. Soon after, he recovered a bio-mask and shoulder cannon from a window display and ditched the primitive human assault rifle. 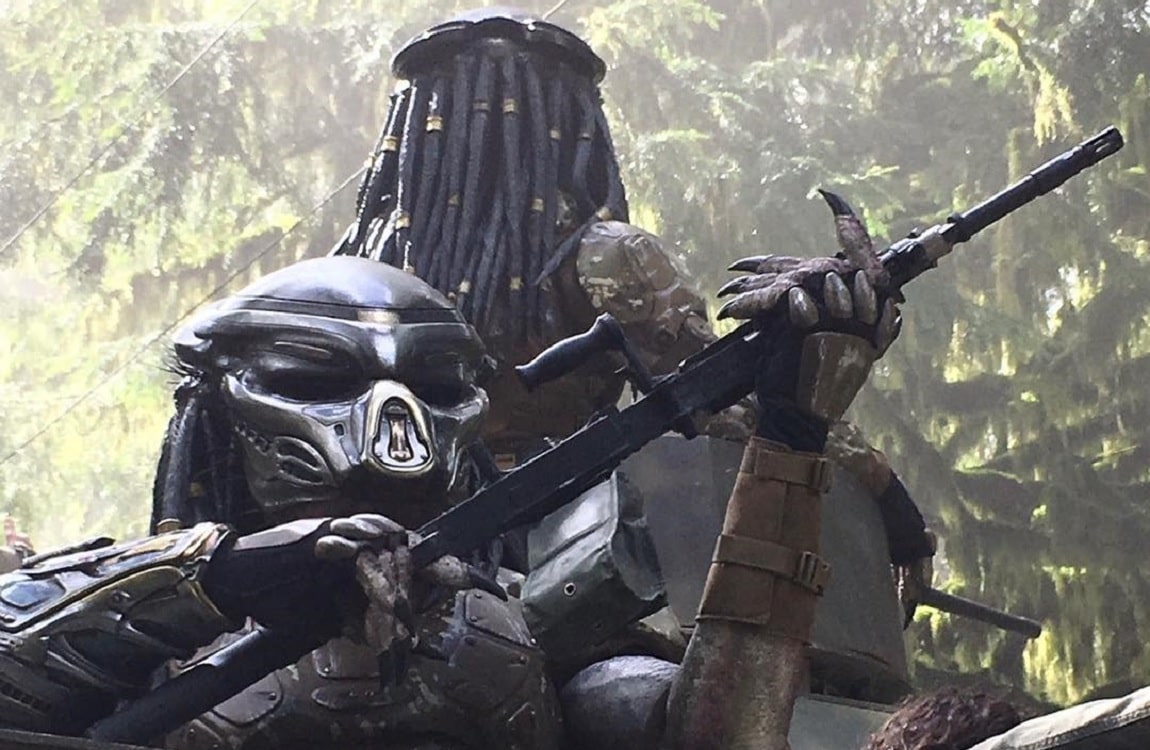 The Emissary Predators were removed from the final cut of The Predator, but somehow they made an impression on people. These two Yautja had joined humans in the fight against the Assassin Predator after the Fugitive Predator was killed. Seemingly having lost their weapons and armor, they restocked themselves from the provisions of the US army. They wielded M240 machineguns and body armor with desert camouflage patterns. In the alternate third act of the movie, one of them was driving on top of a human light tank, shooting a 50 cal. machinegun. NECA released figures for the Emissary Predators, making them somewhat canonical. 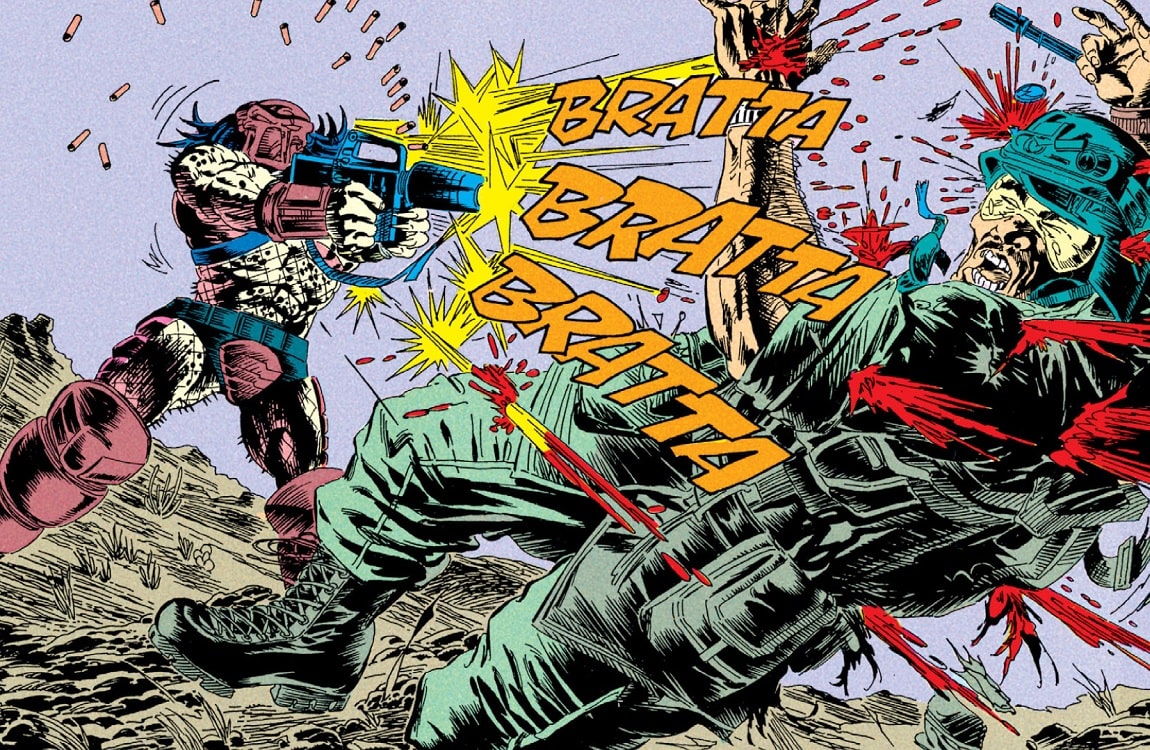 In Predator: Big Game, a crazed Yautja had several run-ins with the US military in the New Mexico desert. After blowing up a US army base with his ship's self-destruct, the army sent several squads of soldiers to hunt the Predator down. In one of their encounters, the Yautja grabbed an M16 rifle from one of the killed soldiers. He quickly learned to use it, even managing to toggle the weapons safety on and off, attracting others soldiers in the night. A private named Corales came forward, thinking it was his friend using the rifle but was blasted by the Yautja with the M16 instead. 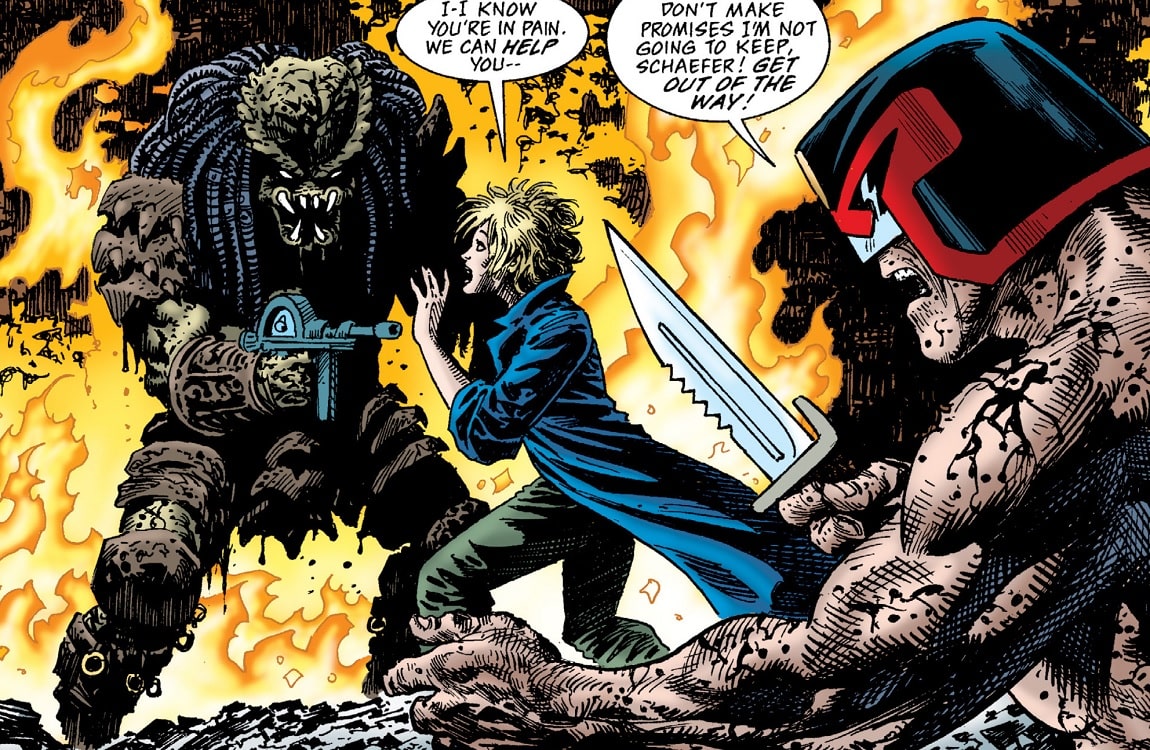 The Mega-City One Predator was a vicious Yautja who lost his life due to using a human weapon in the Predator vs. Judge Dredd comic book. Judge Dredd tracked him down to the undercity of Mega-City One in retaliation to the killing spree caused on the upper levels of the city. After dispatching several Judges and having a stand-off with Judge Dredd, the Predator grabbed the famous Lawgiver Pistol that Dredd had dropped. However, it was hardwired to work only with Judge Dredd's heat signature and exploded in the Predator's hand. Being dazed by losing his hand, Dredd stabbed him in the chest, killing him. This case shows that perhaps the Predators should stick to using their own weapons. 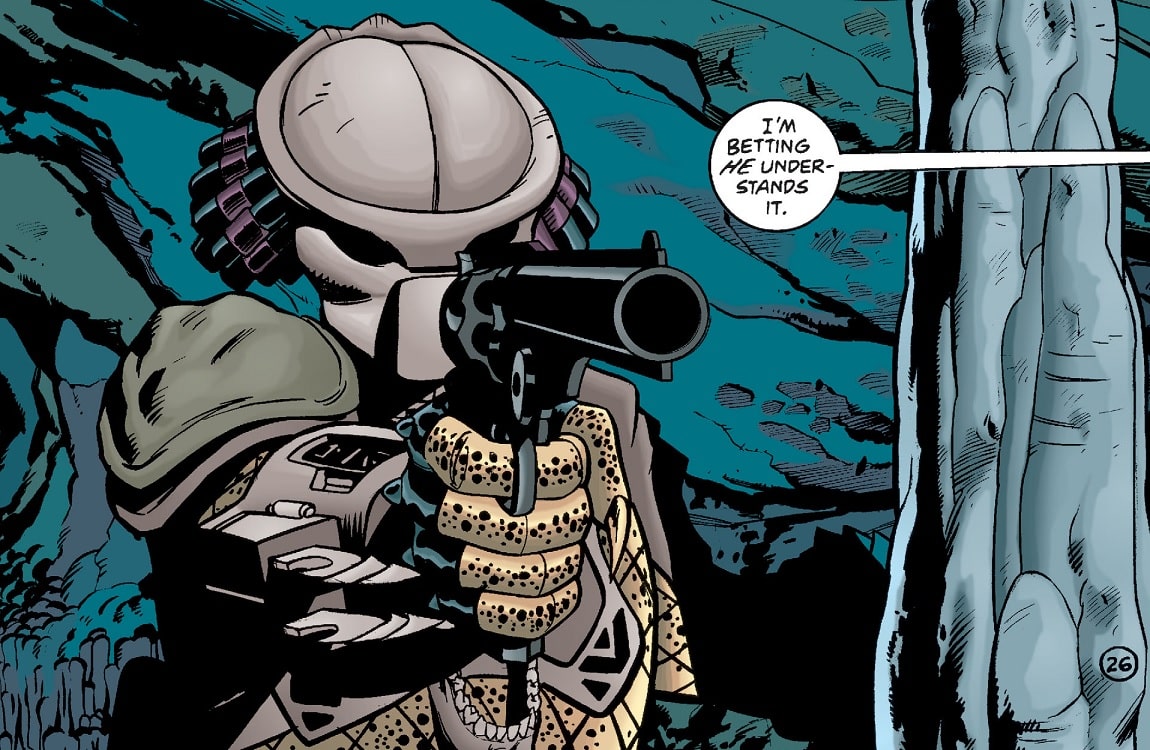 In Batman versus Predator III: Blood Ties, a Young Blood Yautja shot Batman's butler Alfred in the shoulder with an old pistol. The pistol wasn't as old as the flintlock one from Predator 2, and still functioned well. The weapon was a trophy but didn't belong to the Predator as one might think. It was actually taken from Batman's trophy room, which included numerous display cases of old weapons. Robin kicked the pistol from the Young Blood's hand and their fight ended with a stalemate. The young Predator then left Gotham City together with his father. 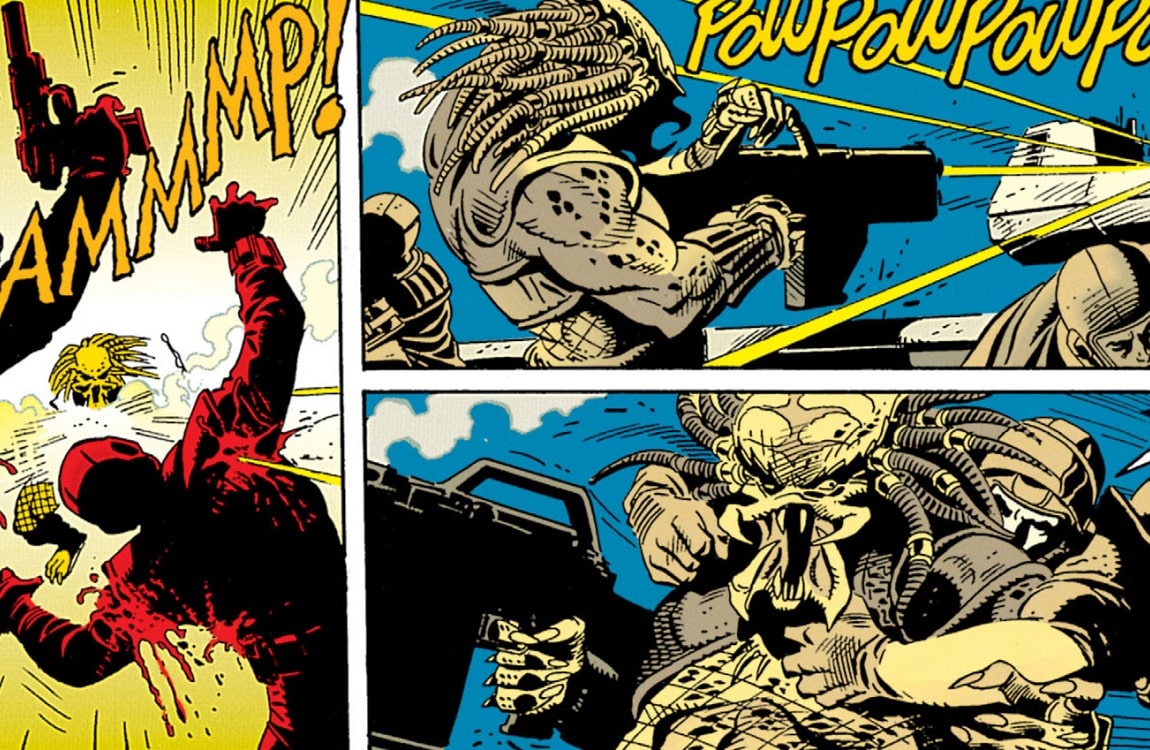 As the name suggests, Aliens vs. Predator: Deadliest of the Species features three fearsome members of human, Predator, and Xenomorph, all being female. In the comic, the female Yautja nicknamed Big Mama joined forces with Ash Parnall and assembled a crew of Xenomorph hunters. Their arsenal consisted of a combination of Yautja and human weaponry. Although Big Mama mostly used her spear, shoulder cannon and wrist blades, she occasionally resorted to using the trusty M41A Pulse Rifle. She did not only use it against Xenomorphs, hostile security forces of Lucient Delacroix were killed by her as well. 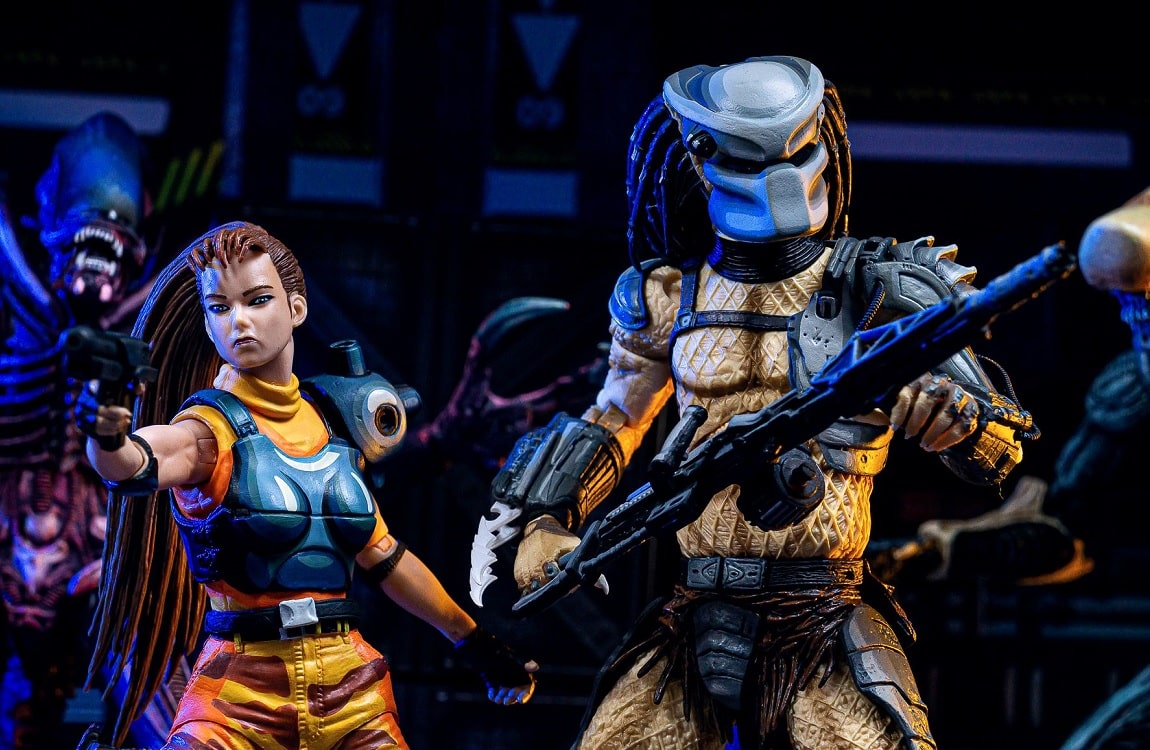 Aliens vs. Predator Arcade was probably the only video game where the Yautja could use human weapons. Having both human (Linn Kurosawa and Dutch Schaefer) and Predator (Hunter and Warrior) playable characters, the game dropped both Yautja and human weapons at your feet, ready to be picked up. This resulted in quite awesome scenes of Predators using pulse rifles and smart guns. Although the weapons are reasonably big, they looked small in the hands of the Yautja. As NECA has done with most Predators, they released figures for all the playable characters of the game. Perhaps the more memorable figure is the Warrior Predator with the M56 smart gun, understandably missing the robotic hand that should be attached to the waist of the marine carrying it.

Want to know more about the Predator expanded universe? Check out the list of the times that Batman encountered Predators and take a look at the most vicious bad blood Predators.