Top 10 Alien books ranked in ascending order. The list contains only books that are considered "in-universe". Any "Making of Books" like Giger's Alien are not included. Graphic novels are also excluded and will appear in an upcoming list. 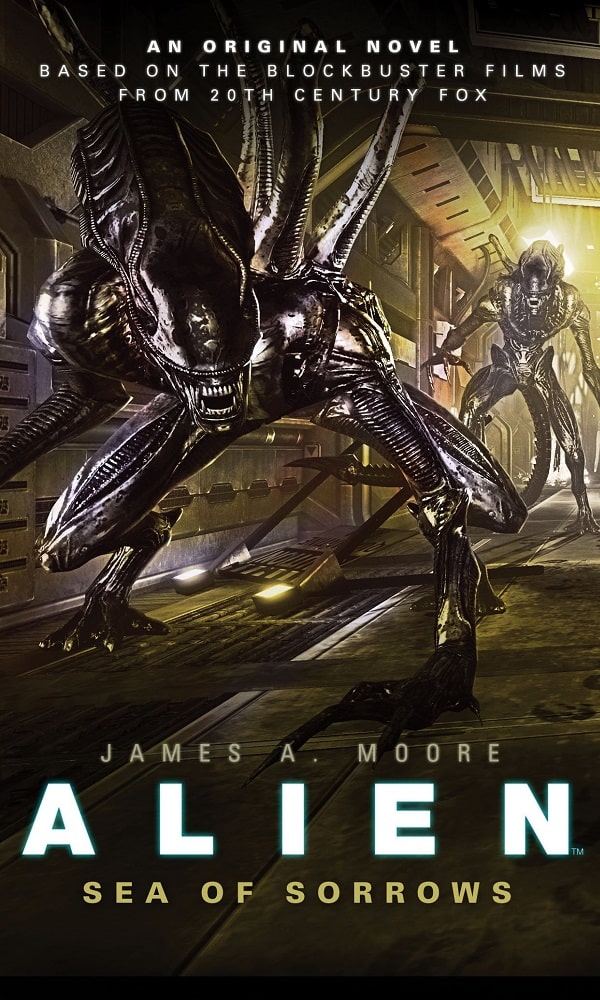 Alien: Sea of Sorrows is a 2014 novel written by James A. Moore and published by Titan Books. A sequel to Alien: Out of the Shadows, the book deals with the rediscovery of dormant Xenomorphs in the abandoned mines of LV-178, which has now been terraformed and renamed New Galveston. The Weyland-Yutani Corporation, reformed after the collapse of the United Systems Military, continue their unceasing efforts to weaponize the creatures, eliciting the help of Alan Decker, an unknowing descendant of the long-dead Ellen Ripley. 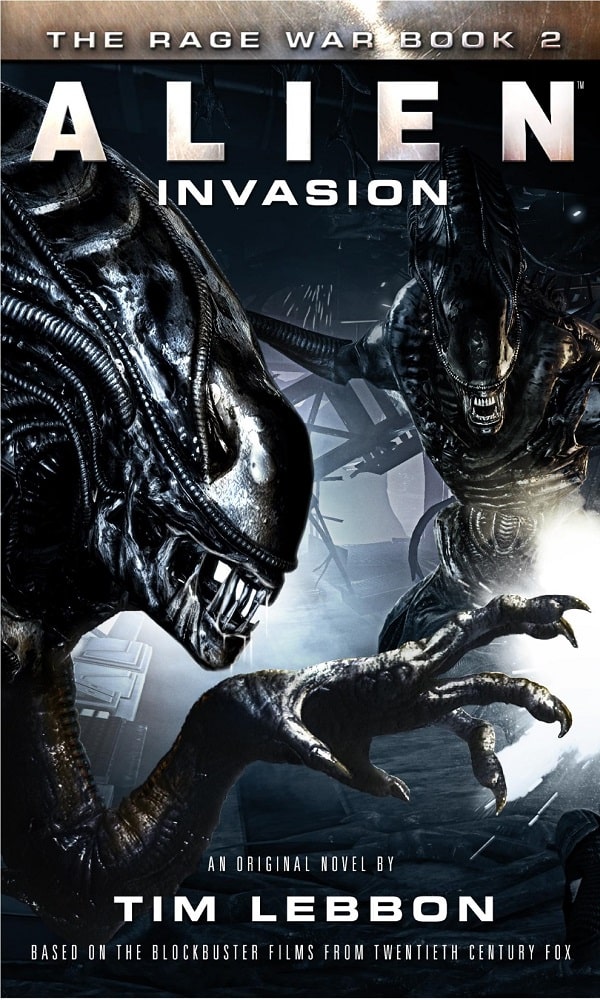 Alien: Invasion is a 2016 novel written by Tim Lebbon and published by Titan Books. It was released on April 26, 2016, as part of Alien Day. Alien: Invasion is the second novel in the Rage War trilogy, preceded by Predator: Incursion and concluding with Alien vs. Predator: Armageddon. Faced with the overwhelming forces of the Rage, Earth envoys forge an unprecedented alliance with the Predators. Yet even the combined might of two races may not be enough to stop the carnage, as an unstoppable swarm of Xenomorphs topples planet after planet, penetrating ever deeper into the Human Sphere. 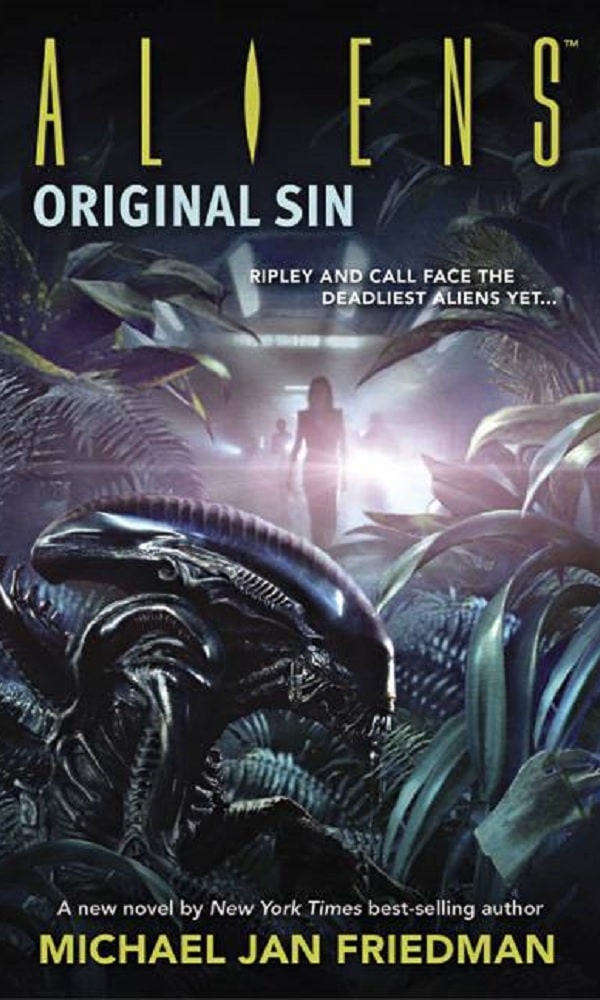 Aliens: Original Sin is a 2005 novel written by Michael Jan Friedman and published by DH Press. It continues the story of Ripley 8 and the surviving crewmembers of the Betty after the events of Alien Resurrection. In 1979, science fiction and horror were brought together in director Ridley Scott's classic film Alien. The film follows the crew of a space cargo ship, the Nostromo, who land on a hostile planet in response to a faint SOS only to discover an abandoned ship with a ravenous alien on board. Alien inspired three movie sequels, and now Aliens: Original Sin expands further on this classic story, bringing back characters like Ripley 8, the clone of Lt. Ellen Ripley, and android Call. It also sorts out unanswered questions from the movies and raises entirely new ones. Was it just a coincidence that the Nostromo happened to pass by the desolate planet? Why was the alien on the crashed ship in the first place? The answers, along with intense action, chilling horror and even deeper questions await in suspense virtuoso Michael Jan Friedman's Aliens: Original Sin. Original Sin is included in the Complete Aliens Omnibus Volume Five. 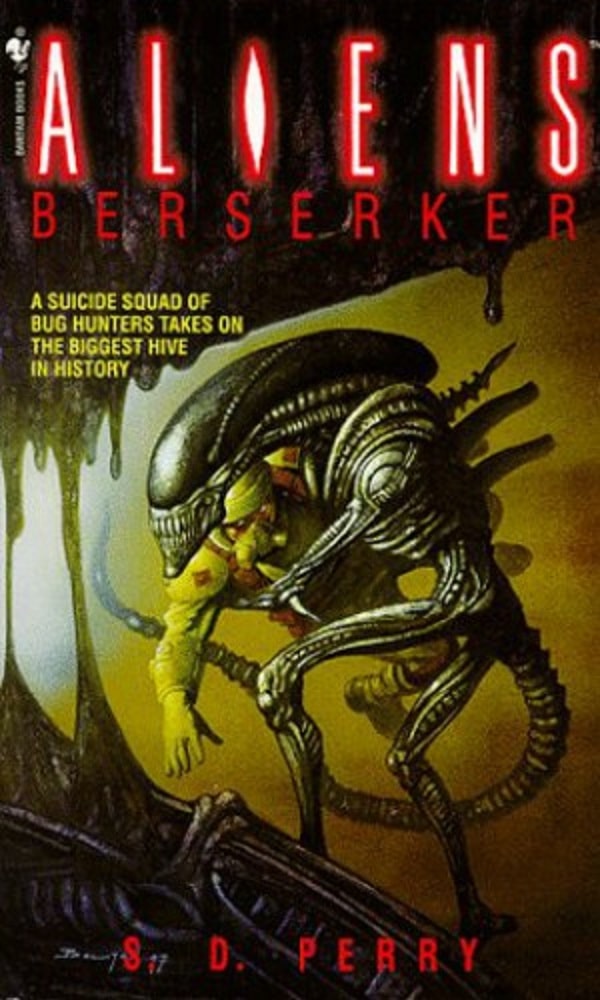 Aliens: Berserker is a 1998 novelization of the comic series Aliens: Frenzy, written by S. D. Perry and published by Bantam Spectra. The book follows a Weyland-Yutani "hunter/killer" team, a squad consisting of hardened convict volunteers and a lethal Berserker combat mech specializing in Xenomorph clean-up operations, as they tackle the largest Hive in history aboard the space station DS 949. Aliens: Berserker is included in the Complete Aliens Omnibus Volume Four. 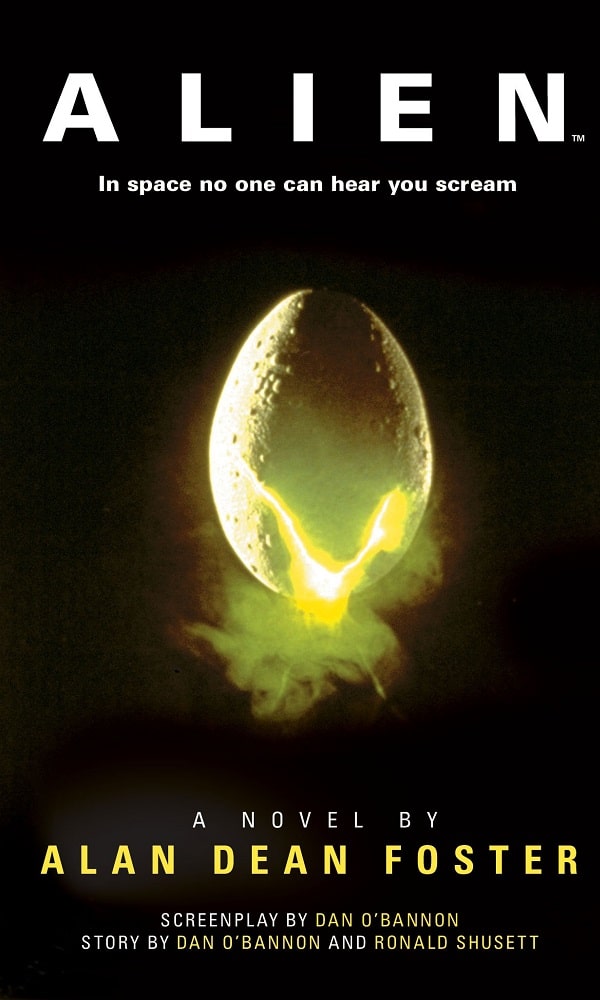 Alien: The Official Movie Novelization was written by the legendary sci-fi author Alan Dean Foster and based on the screenplay by Dan O'Bannon. Although Alan Dean Foster went on to write more novelizations of the Alien films, this is the first and most important one. Even if you know the plot of the film, the book is hard to put down and really enjoyable. The book has some interesting differences from the movie, like the crew is in hypersleep naked, the chestburster has arms and legs and the fully-grown Alien has eyes. If you plan to pick up only one novelization out of all the Alien films, then choose this one. 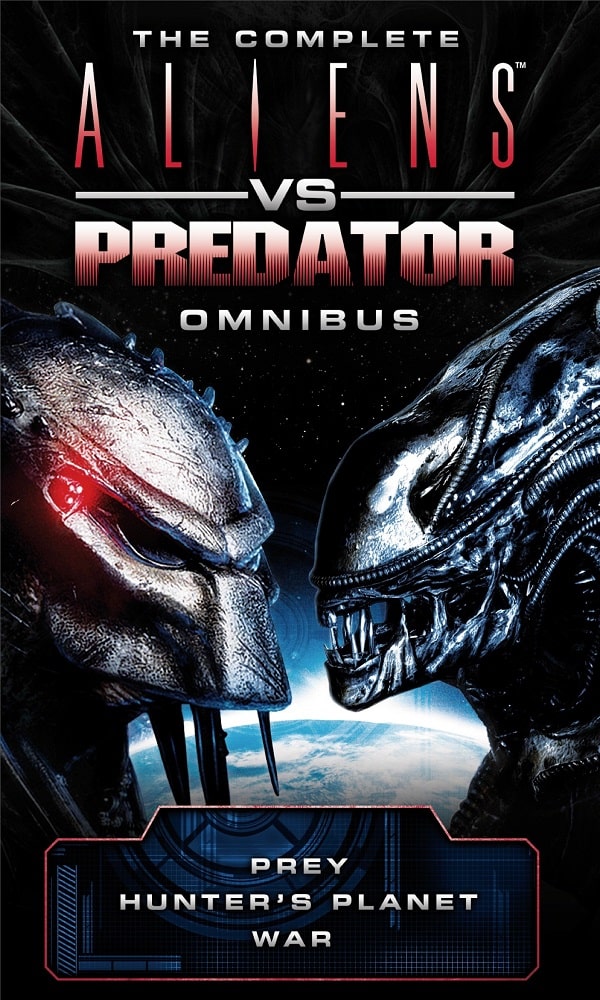 Aliens vs. Predator: Prey is a 1994 novelization of the first Aliens vs. Predator comic book series, written by Steve Perry and Stephani Perry and published by Bantam Spectra. In the story, human colonists on the planet Ryushi are caught in the crossfire between a band of wayward young Yautja and the Xenomorphs they are hunting. In order to save the survivors, the colony's leader Machiko Noguchi is forced to team up with a Predator she christens Broken Tusk in order to put an end to the carnage. Prey is included in the Complete Aliens vs. Predator Omnibus. 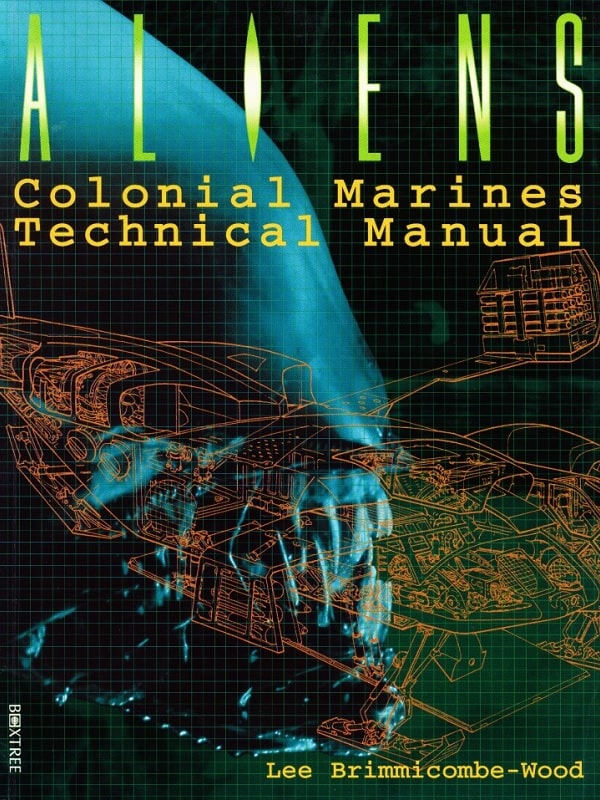 Aliens: Colonial Marines is one of the best Aliens-based book ever for a person interested in small details. First released in 1995, it covers all aspects of the Colonial Marines weaponry, armor, vehicles, ships, and tactics. In addition to the weapons seen in the movies, it invents some new ones like the M83 rocket launcher, later used in the AvP 1999 and AvP 2 video games. One of the most impressive pages is the inner and outer schematics of the Sulaco. It even involves some interviews by fictional Colonial Marines soldiers and offers an analysis of what happened on LV-426. It is highly recommended for all Aliens fans. 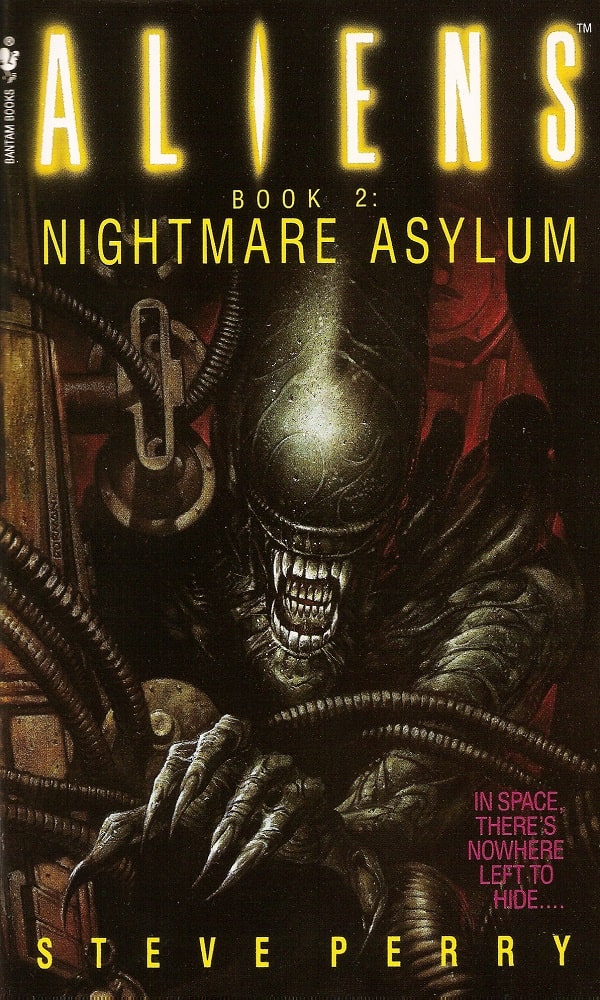 Aliens: Nightmare Asylum, also known as Aliens Book 2: Nightmare Asylum, is a 1993 novelization of the comic book series of the same name, written by Steve Perry and published by Bantam Books. A sequel to Aliens: Earth Hive, the book follows Sergeant Wilks and Billie as they encounter General Spears, a psychotic Colonial Marine commander seeking to "train" an army of controllable Xenomorphs to help retake an Earth ravaged by Alien infestation. Nightmare Asylum is included in the Complete Aliens Omnibus Volume One. 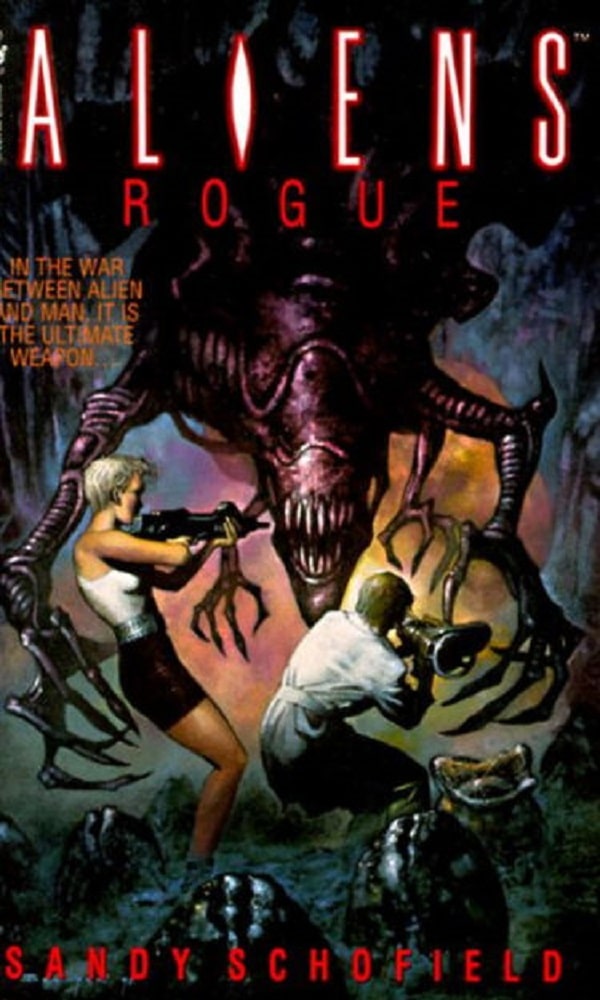 Aliens: Rogue was released in 1995 and is based on a comic book series with the same name. Taking place on a remote asteroid in Charon Base, it follows a mad scientist Ernst Kleist's attempts to create a new breed of Alien - a hybrid king. Things don't go as planned and all hell breaks loose. Caught up in the chaos is a squad of Colonial Marines led by sergeant Green and a starship captain Joyce Palmer. There is a great chapter about a scientist trying to spy on Kleist but it ends with his living head being placed in a jar on a shelf. Compared to the comic, it fleshes out the characters more and makes the Colonial Marines more competent. The book is action-packed and great fun. Aliens: Rogue is included in the Complete Aliens Omnibus Volume Three.

Alien: Cold Forge is one of the most recent Alien novels and possibly the best one as well. The story is nothing special - there is another secret research lab experimenting on Xenomorphs. What makes it great is the deeply developed characters and their fleshed-out motivations. Dorian Sudler makes a great villain in the auditor sent to the research facility to cut costs. He slowly descends into madness while becoming more ruthless and getting fascinated by the Aliens. The novel takes some cues from Alien: Isolation as well, with several characters sneaking around the Xenomorphs with great tension.

Interested in more books from the Alien vs. Predator series? Check out the list of the best Predator books and the best Alien graphic novels.