The smartgunners are an important part of any Colonial Marine squad, offering powerful support fire from the sides or leading from the front. The smartgunners tend to have many kills and are often memorable for their bad attitude, including the likes of Vasquez and Drake from Aliens, and Jones from Aliens vs. Predator 2. 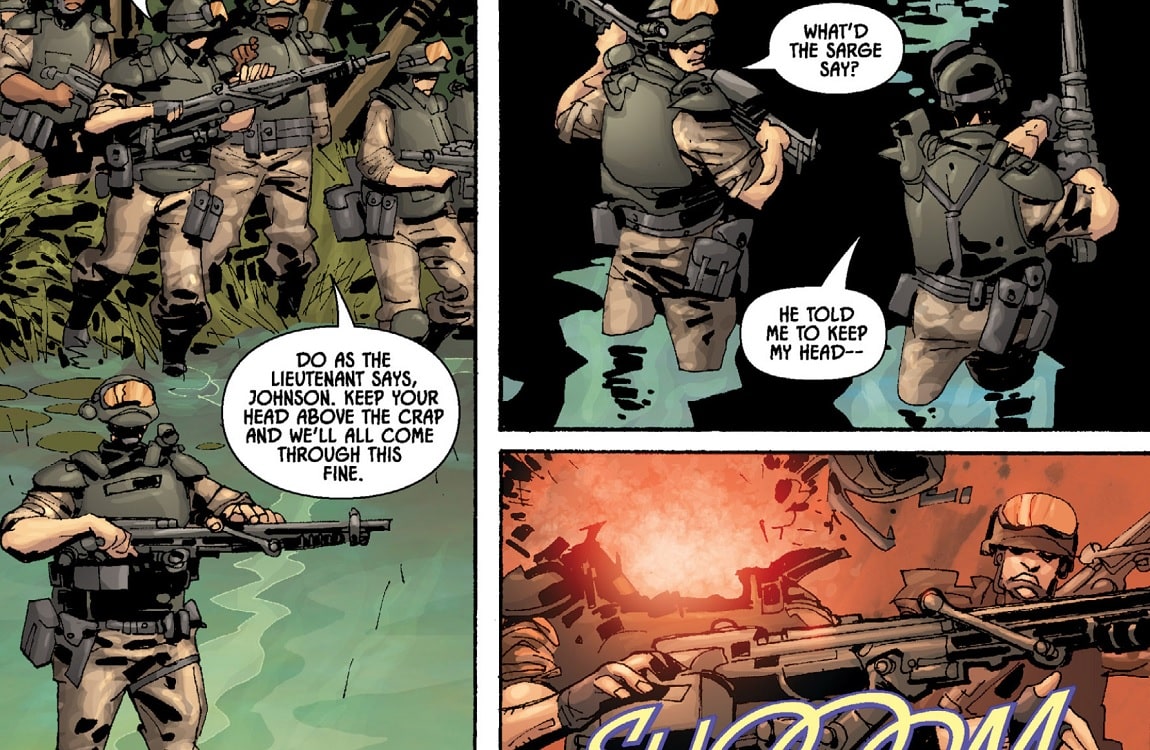 Private Johnson from Alien vs. Predator: Three World War did not have a long career as a USCM smartgunner. He was stationed on the USS Tarawa and was part of a squad of marines sent to capture an Alien Queen from the planet Ryushi. Their goal was to bring the Queen to another planet conquered by the evil Killer Predators to loosen their control over the tusked Xenomorphs. After successfully capturing the Queen together with Machiko Noguchi and landing on Caparis VII, private Johson's head was blown off by a shoulder cannon of one of the members of the Killer clan. However, his sacrifice was not in vain, as the marine squad was victorious in the end. 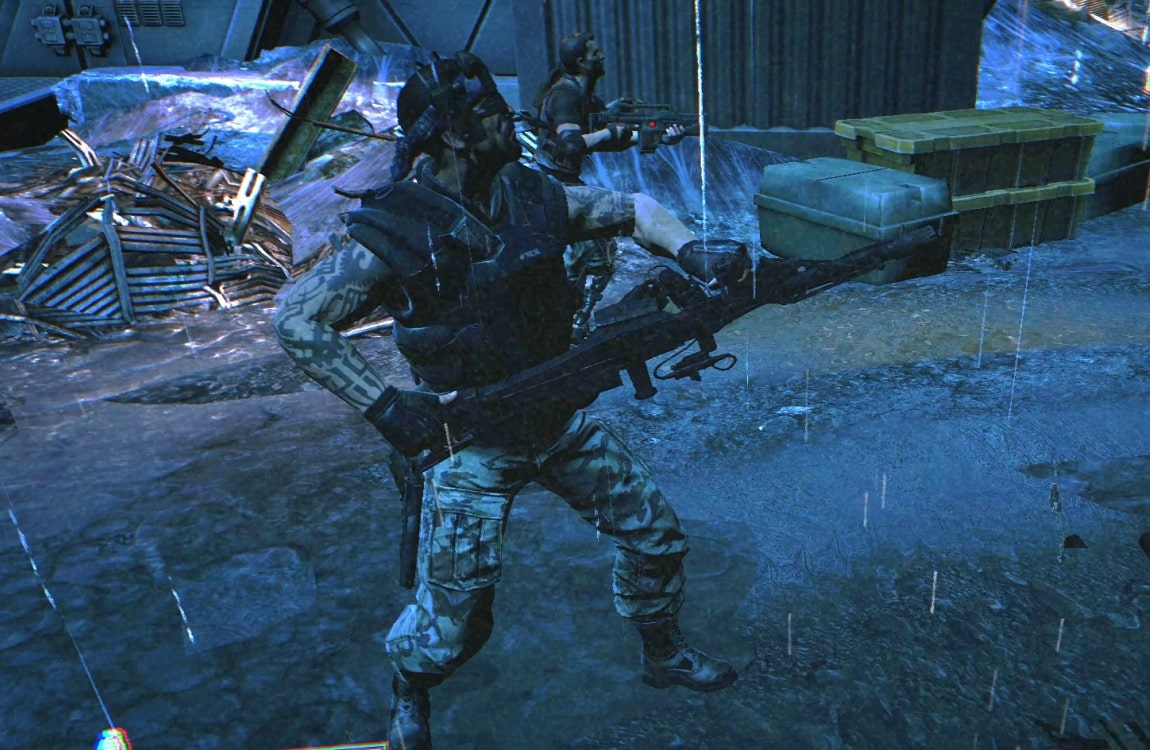 Private Peter O'Neal was a somewhat annoying sidekick to Corporal Winter in the ill-fated Aliens: Colonial Marines video game. He tagged along with the protagonist through most of the missions and often got in the way of the player. Early on, he gained access to his trusty smartgun and provided fire support, which was often low-damage so kept shooting the same Xenomorphs over and over. In the end, he did survive his mission, managed to avenge his girlfriend Bella, and escaped with his fellow marines from LV-426 on a Weyland-Yutani FTL ship.

Private Phil Sandberg was one of the few Colonial Marines whose perspective we see on Earth during the Earth-Alien war that started in Aliens: Outbreak. Smartgunner Sandberg and two other fellow marines were stranded in an abandoned police station in New York. First, they tried to find answers to the cause of the invasion from a nearby bio-research company. Unfortunately for them, a dying employee sets off a nuclear bomb, mirroring the title of the story - Aliens: Countdown. Fighting through Xenomorphs and hostile marines, they try to reach a ship but are eventually overwhelmed. 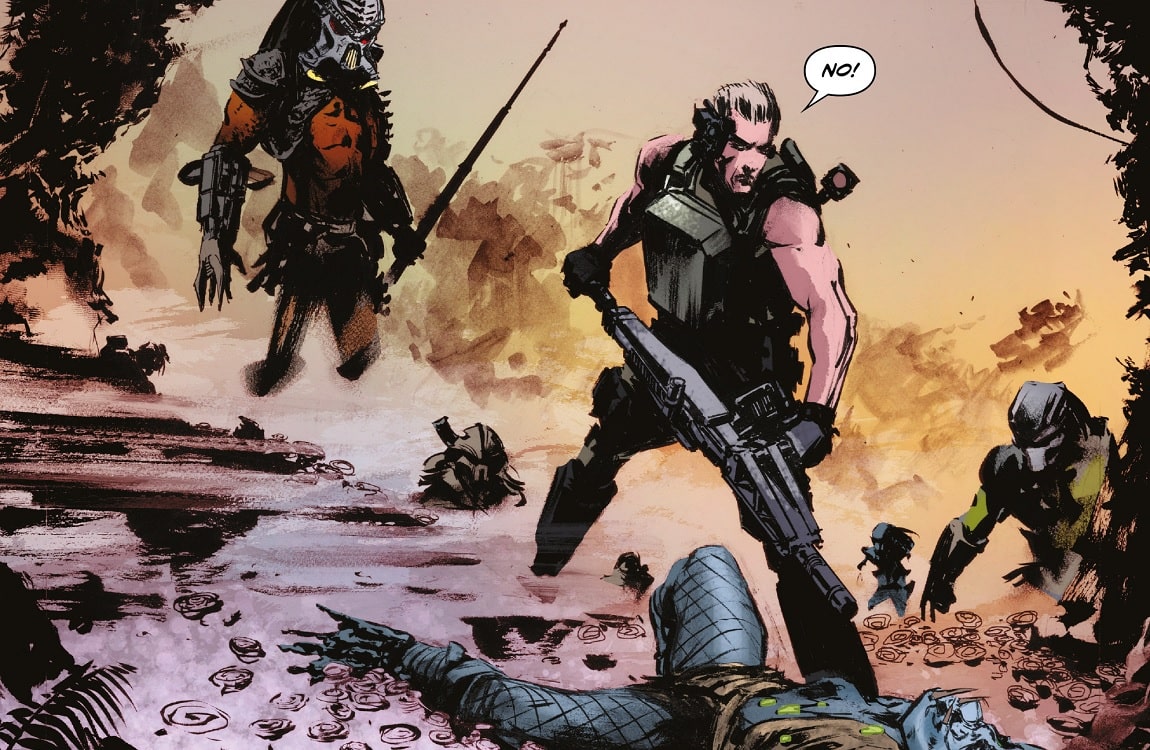 Rucker was one of the two Smartgunners from the USS Hasdrubal as depicted in the epic Life and Death comic series. He was one of the few Colonial Marines who fought against the Yautja, fighting over the ownership of a Derelict Ship on LV-797. Rucker killed the legendary Hive Wars Predator, but accidentally shot private Lee in the head. Later on LV-223, the smartgunner walked into a Xenomorph ambush, being dragged into the bush while the other marines were attacked. Rucker died in an Alien hive when a chestburster emerged from his chest. 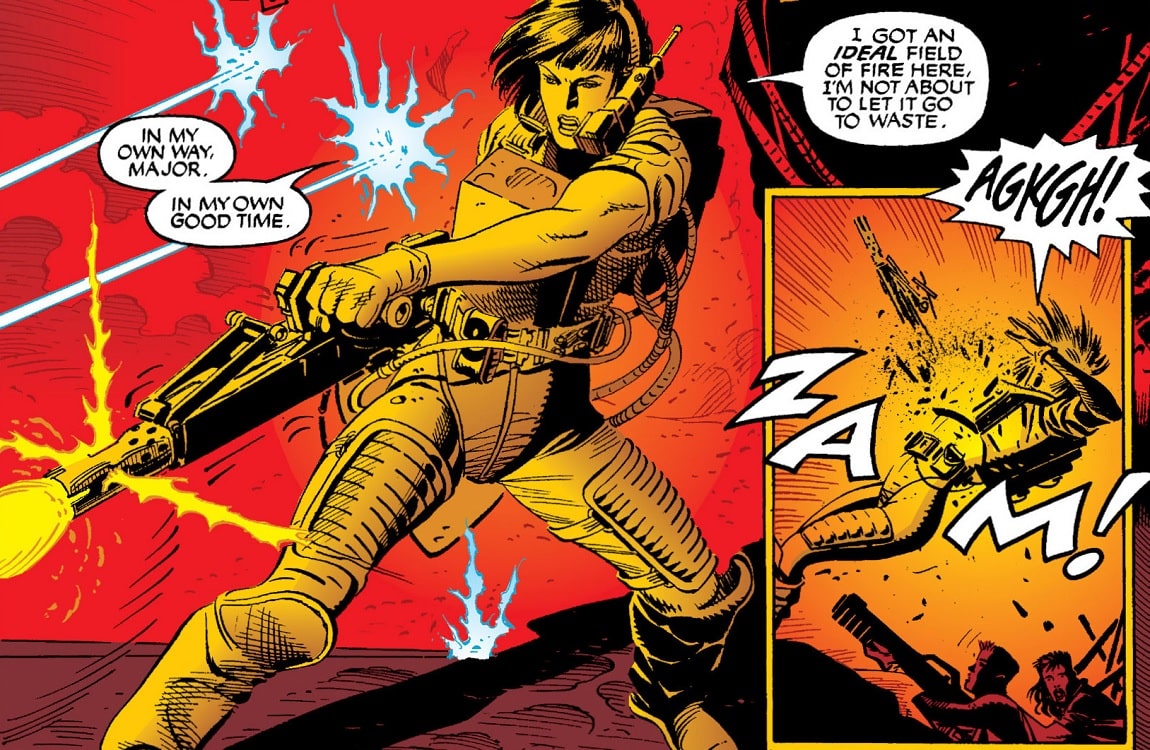 Genna from Aliens vs. Predator: Deadliest of the Species was a Colonial Marine smartgunner providing security on the Samara Station. When a female Predator named Big Mama arrived on the station, things escalated quickly and soon there was an all-out brawl between a Xenomorphs, humans and robotic Xenomorphs. Genna ended up joining Big Mama's gang of misfits, which included Ash Parnall. Together they fought the poor-mans version of Weyland-Yutani, a company called Montcalm-Delacroix that created White Hybrid Xenomorphs. While initially using the smartgun, she later switched the using Predator gear instead, provided by Big Mama. 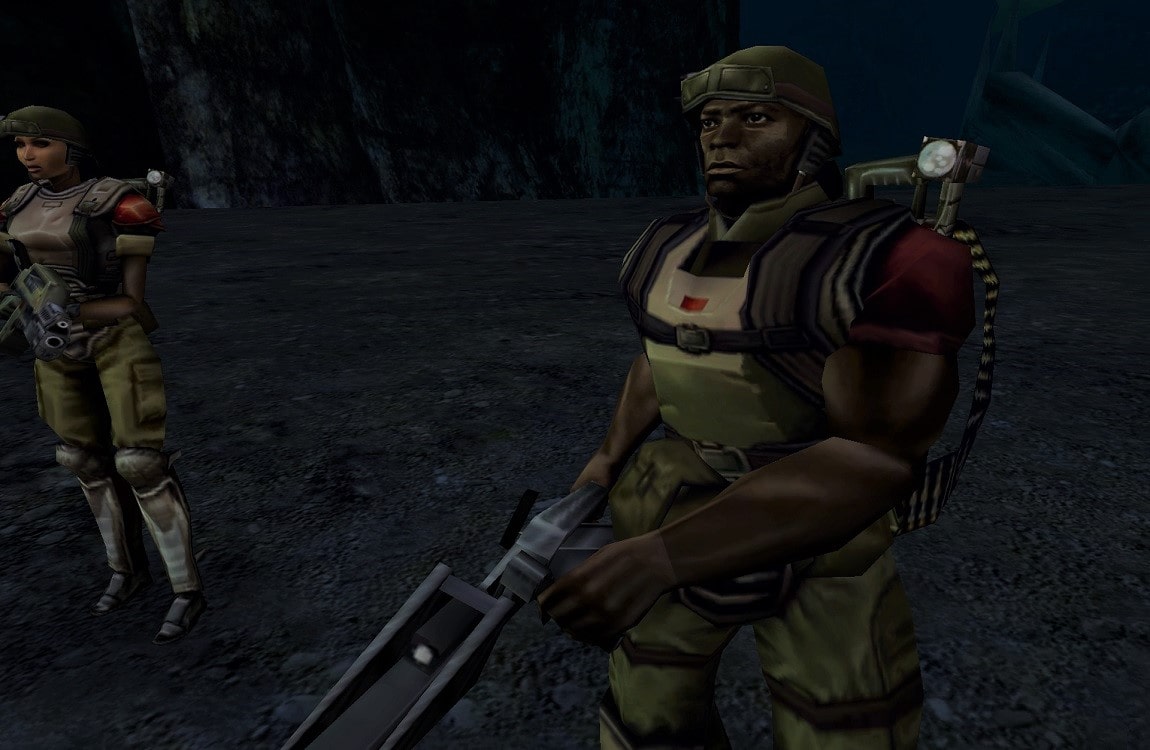 Jones was a heavy weapons specials onboard the USS Verloc, which answered a distress call from LV-1201 during the events of the Aliens vs. Predator 2 video game. His marine unit was largely successful, taking only a few casualties during the mission. Jones was heavily built and kept to himself, having only a few lines during the campaign led by Corporal Andrew Harrison. Besides the smartgun, he used other heavy weapons like the Sadar and minigun, managing to mow down multiple Xenomorphs. He escaped with his fellow marines onboard the Verloc, being followed by a Predator ship. 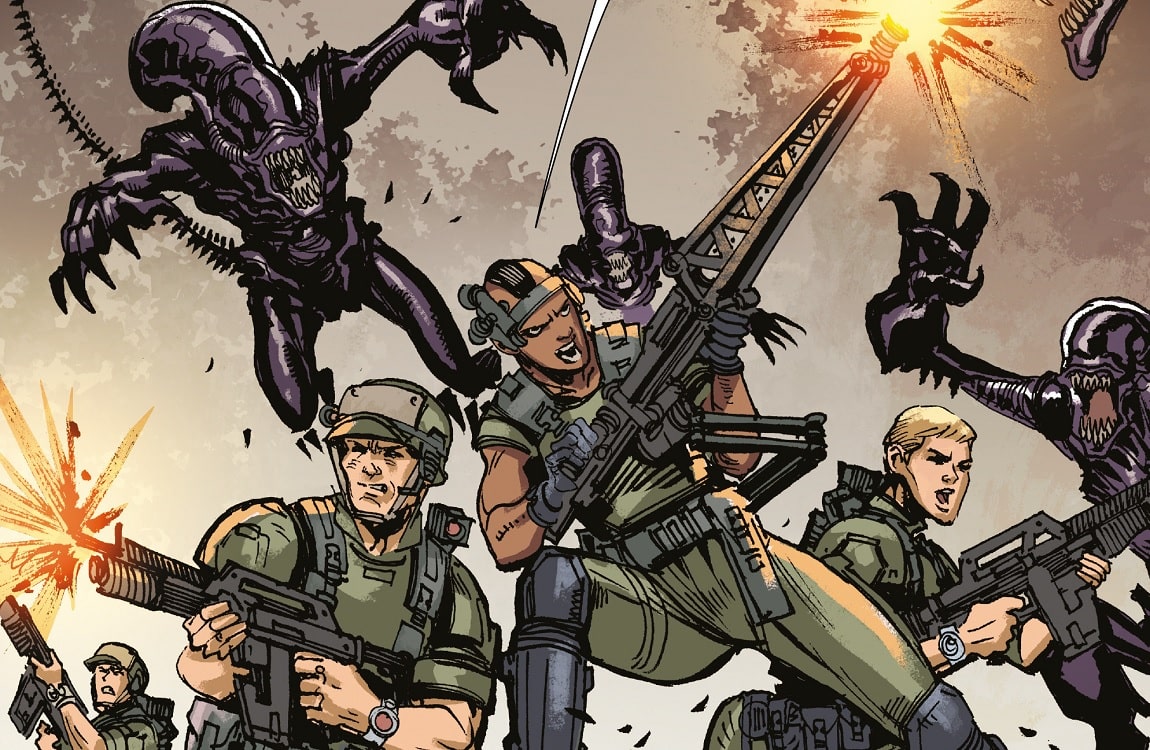 Freebody was the second smartgunner from the Life and Death series and can be considered to be the more successful one. Like Rucker, she survived the Yautja attack on LV-797 but managed to avoid any friendly fire incidents. On LV-223 she successfully fought off hordes of Xenomorphs that attacked the shrinking squad of marines. She wounded an Engineer with her smartgun which enabled Captain Paget to kill the giant later. Freebody was one of the few surviving marines from the LV-223 incident but her final fate onboard the Engineer Derelict Ship is left open.

Captain Kylie Duncan is the only villain in the list, but that does not make her less awesome. Appearing in the acclaimed Alien: Into Charybdis, she was the commander of a platoon of marines sent to an Iranian research facility to take it under US control. She was a veteran of numerous Alien encounters, receiving several wounds, including a big scar on her jaw. Although a high-ranking officer, she did not shy away from fighting Xenomorphs herself. Taking a half a dozen marine comrades with her, she descended into an Alien hive and wiped out about 300 Xenomorphs with smartguns. After her fellow marines died, she received horrible acid damage and fell into a pit of Black Goo. 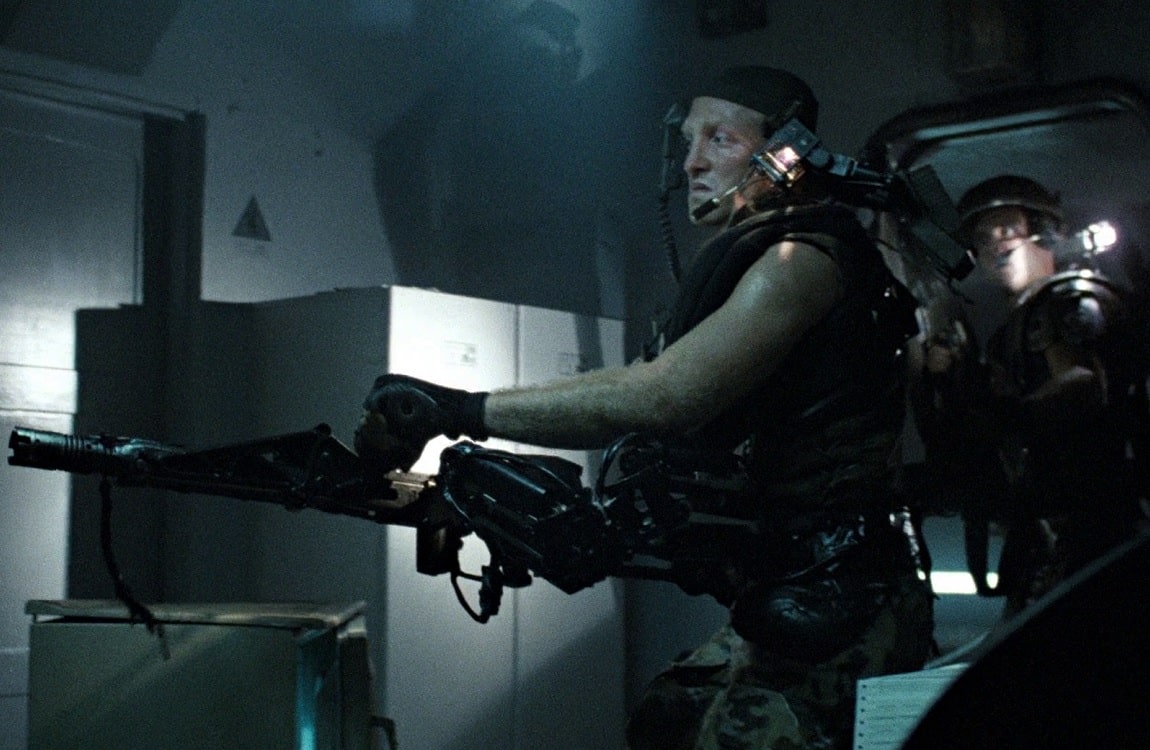 Drake was one of the two smartgunners stationed on the USS Sulaco. He had a special relationship with PFC Vasquez, with them sharing a past together and being possible lovers as well. James Cameron hinted that they were together in a juvenile correctional facility, and joining the Colonial Marines was a chance for a new life for them. Drake followed Vasquez's lead in the atmosphere processor battle and covered their retreat. When his smartgun ran empty, he grabbed a flame unit out of nowhere and continued firing. He almost made it to the APC and would have been a viable asset in the Ops battle, but the acid splash from a Xenomorph killed him. 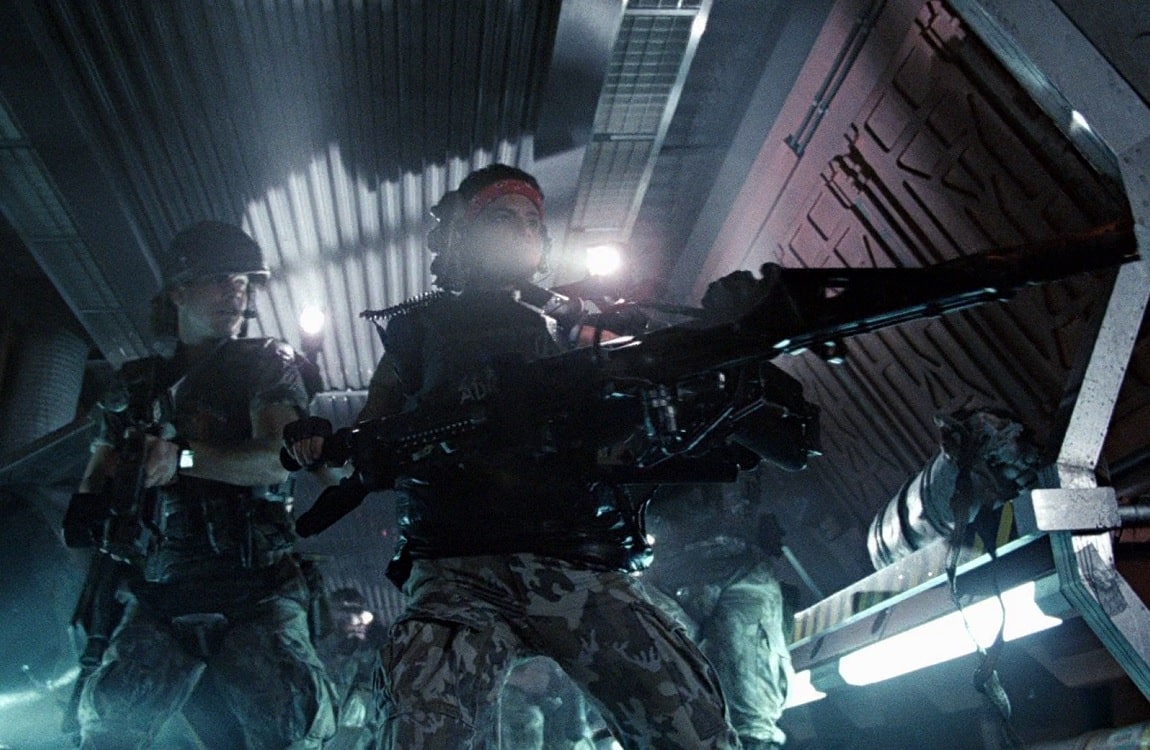 PFC Vasquez is the most well-known smartgunner in the Alien franchise and rightfully so. She played a crucial part in the Colonial Marine operation on LV-426 and perhaps killed the most Aliens out of all the marines. She was handy not only with the smartgun but the pulse rifle as well, preferring to use the grenade launcher to great effect. Although her actions doomed the atmosphere processor and her friendly fire killed Drake, she redeemed herself in the Ops battle and sacrificed her life together with Gorman, taking more Aliens with them in the explosion.