Although it is unclear if the Engineers were the original creators of the Xenomorphs, they were at least involved in the process. As is the common theme in the franchise, the Xenomorphs can not be controlled and have become a hated enemy of the Engineers. Here is an overview of the different clashes between Xenomorphs and Engineers, some happening even thousands of years ago. 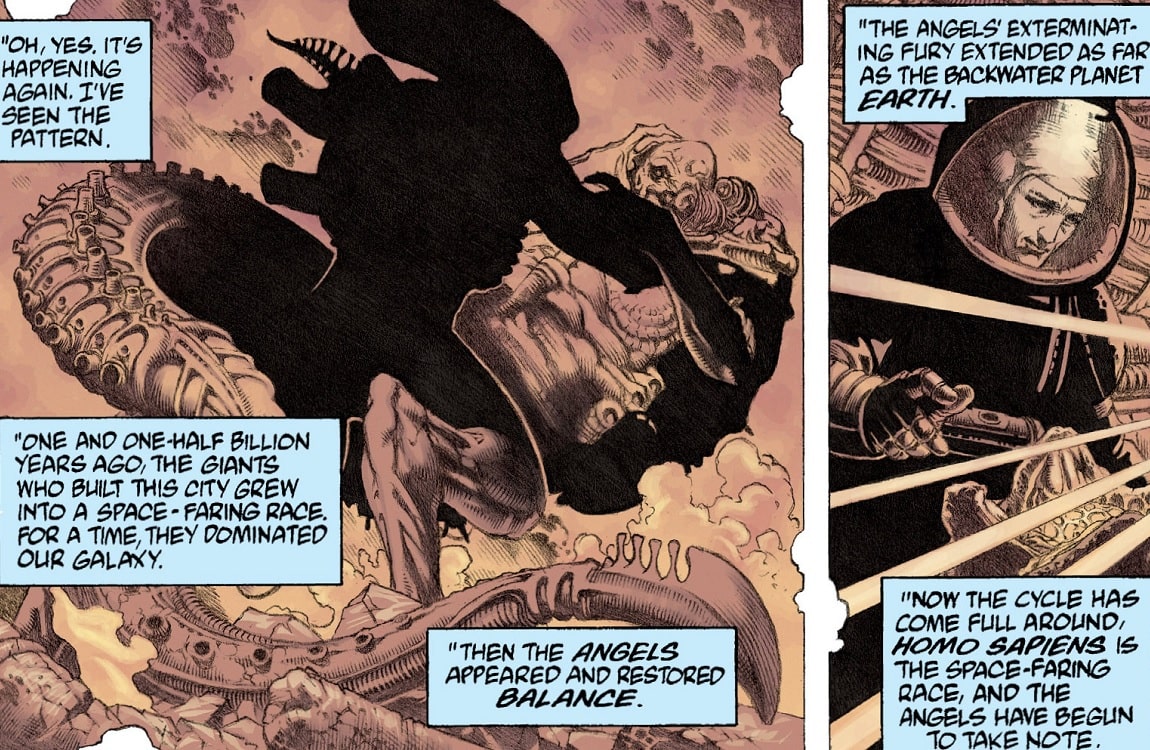 Before Prometheus came along, the Space Jockeys were described differently in the Alien expanded lore, with giant elephant-like features and not a man in a suit. One of the comics to go deepest into the Space Jockey lore was Aliens: Apocalypse, set between the events of Alien and Aliens. In the comics, a group of scientists discovered a Space Jockey ship and explored their original origins. About half a billion years ago, the Space Jockey race dominated the galaxy until the "Avenging Angels" (Xenomorphs) came upon them and wiped out most of the race. Being big and slow, the Engineers were too slow to put up a good fight against the creatures. The characters in the comic speculated that the same fate would fall on Earth, which it kind of did in the Alien Earth War epic saga. 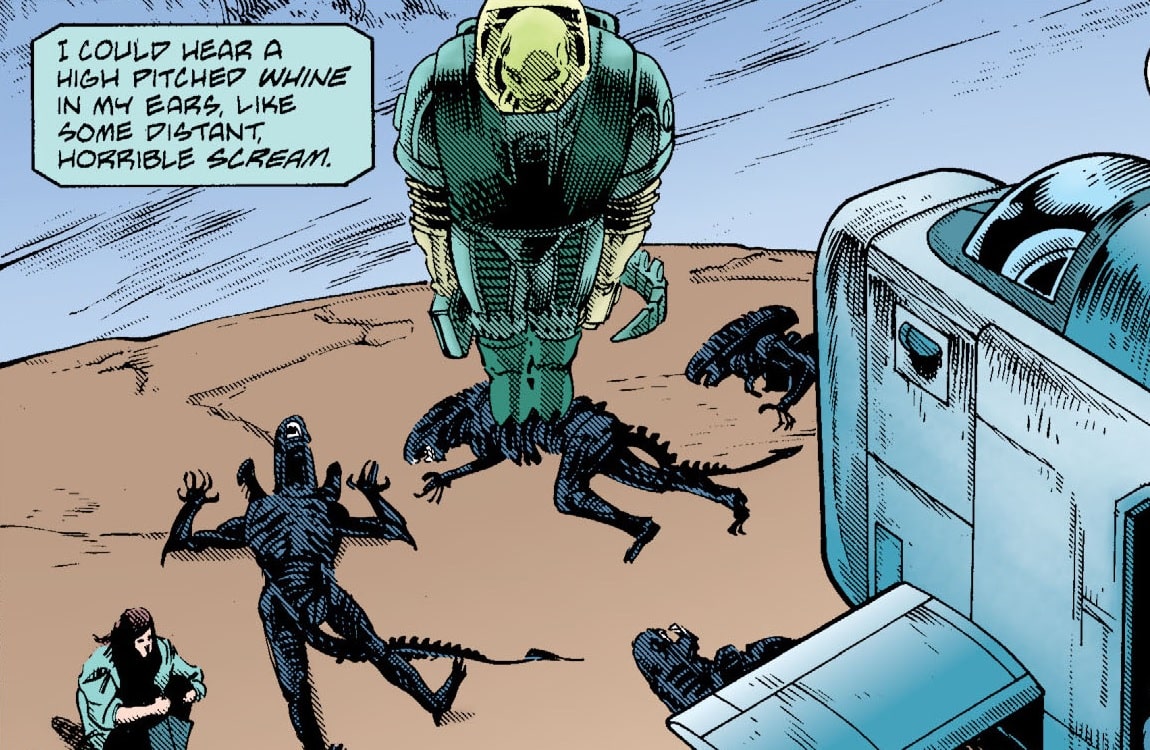 One of the few remaining survivors of the ancient Space Jockey apocalypse appeared in the Aliens: Outbreak comic on the Alien hiveworld. He seemed wiser and better prepared to deal with the Xenomorphs. In the comic, Wilks and Billie (alternate versions of Hicks and Newt) got in trouble on a mission to the Alien homeworld to obtain a Xenomorph specimen. When their squad was wiped out and the ship surrounded by Xenomorphs, the lone Space Jockey suddenly appeared and killed all the Aliens in a few seconds. He was wearing special space-suit-like armor and used a laser weapon to obliterate the Xenomorphs. While hovering above the ground with his telekinetic ability, the Jockey made a telepathic link with Billie and projected his thoughts about his hated enemy. 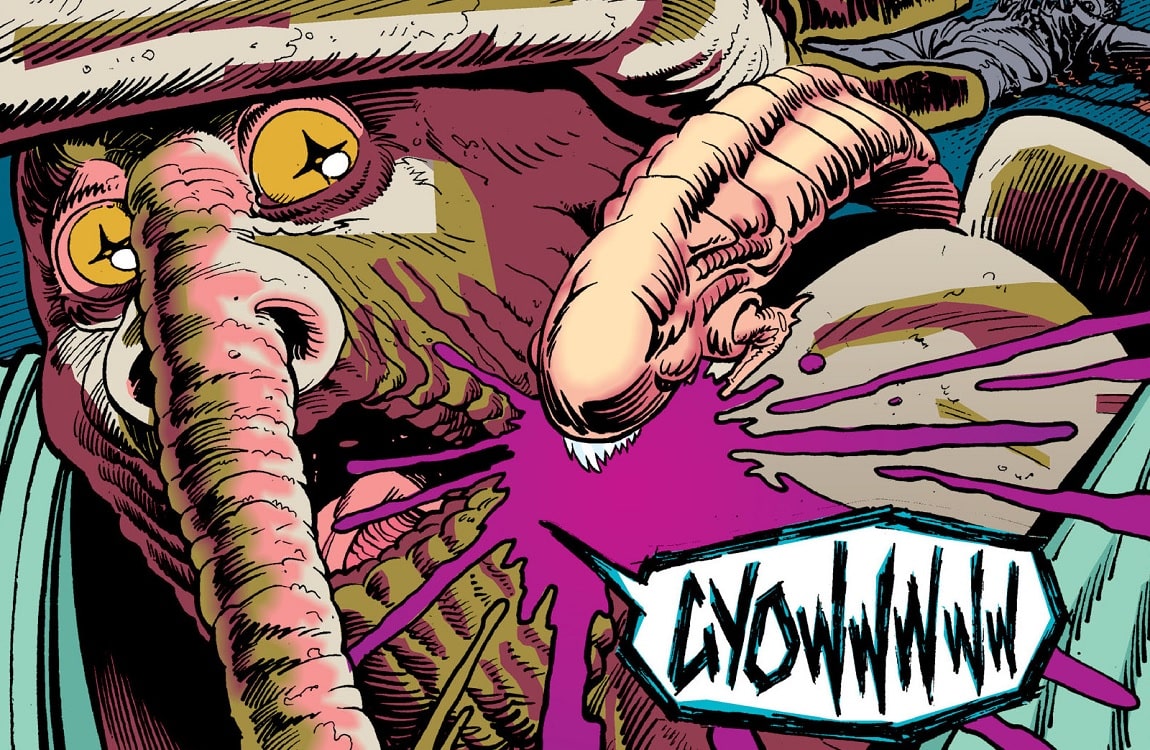 The Emissary Space Jockey from the aftermath of the Alien Earth War comic trilogy had a brief fight with chestburster on board his ship. This was part of a convoluted plan of the humans to get rid of the remaining Space Jockey who was terraforming Earth. They sent a group of androids disguised as representatives of the government of Earth to discuss the future of the planet. After the Space Jockey figure out the deception, he had a brief scuffle with the androids and dispatched them with relative ease. However, the only human of the group then gave birth to a chestburster, which immediately attacked the Jockey and bit into its neck. The Space Jockeys were terrified of the Xenomorphs, so this distracted him enough for the military to be able to destroy his ship with missiles. 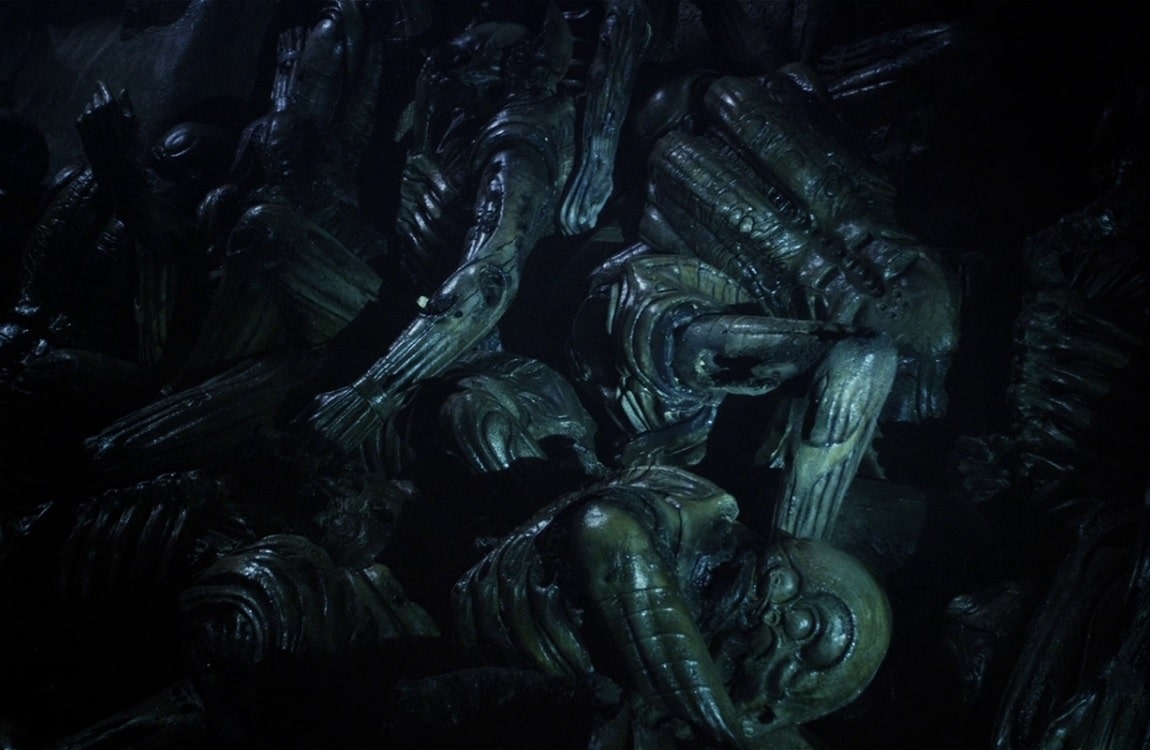 Thousands of years before the events of Prometheus, the Engineer research facility on LV-223 had a biocontainment outbreak. The holograms seen by the crew of the Prometheus revealed Engineers running in the corridors from an unknown threat. Later, a pile of Engineer bodies are discovered, some of them with ribcages opened from the inside. One of the panicking Engineers had run to the room of the black goo containers, but fell under the door, which decapitated him. This would suggest that at least a preliminary form of Xenomorph was involved and that the Engineers didn't just succumb to a black goo infestation. Perhaps like in the comics, the Engineers were afraid of the Xenomorphs because they wiped out most of their race after their creation. 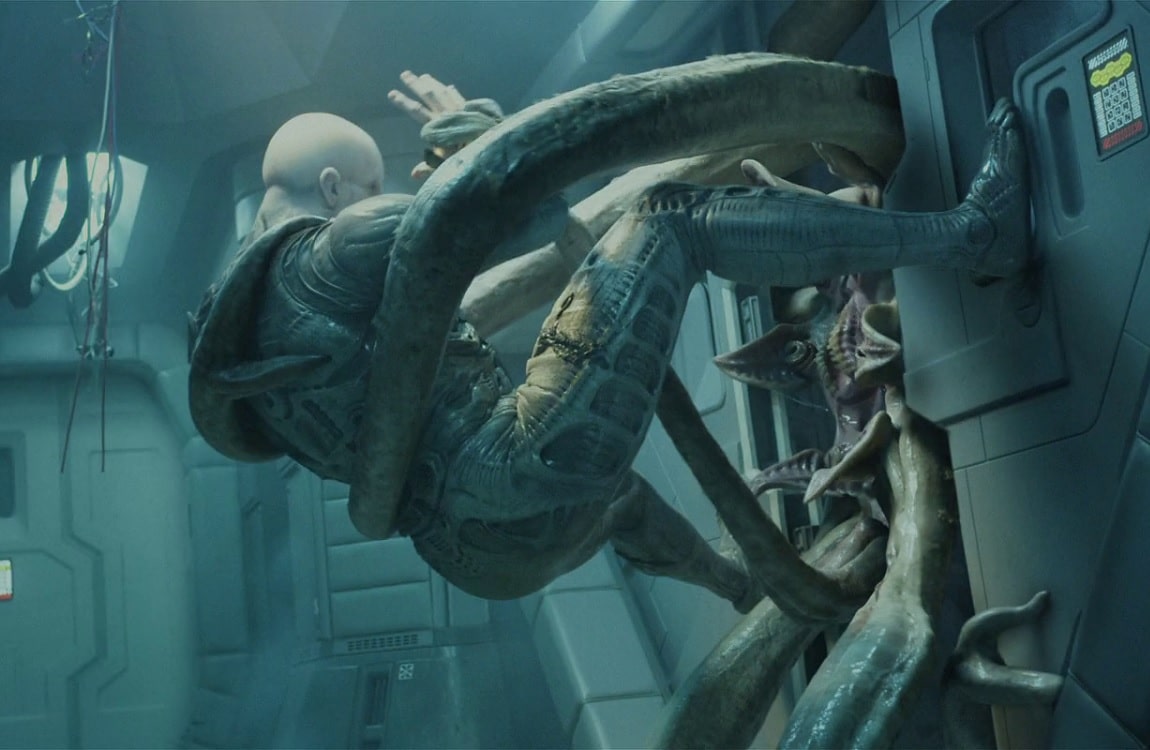 Although not fully a Xenomorph, the Trilobite was a preliminary type of facehugger that emerged out of Dr. Elizabeth Shaw during the events of Prometheus. After being extracted by an autodoc, it was left stuck in the operating room of the Prometheus, which was conveniently part of the capsule. When the awakened Engineer came to kill Shaw, she escaped to the capsule and lead the mad giant to the operating room, releasing the trilobite. The ensuing fight was a short one, where the trilobite quickly overwhelmed the Engineer, pulling his face into its big mouth. Having no weapons but it's bare hands, the Engineer could only struggle. It then fully covered the Engineer's body and inserted the embryo of the Deacon, who was born soon after. 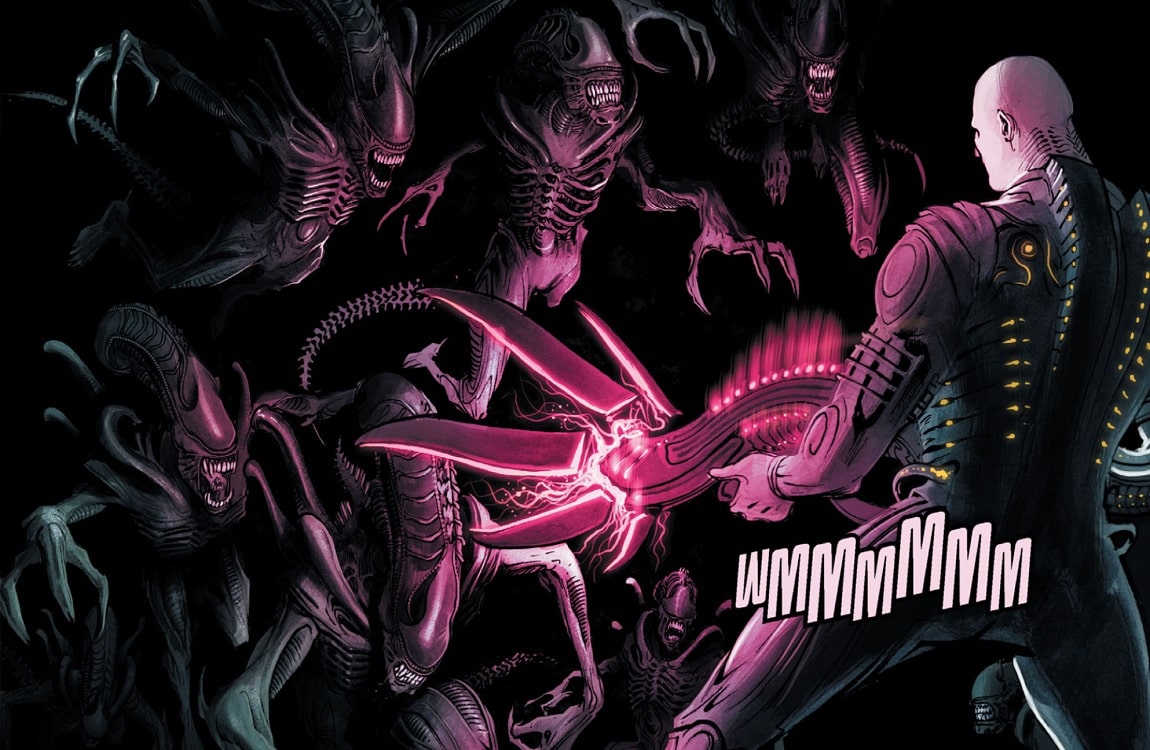 In the Fire and Stone comic series, a second engineer woke up decades after Prometheus and started to cleanse LV-223 of Xenomorphs. By this time, the surface around the Engineer facility had transformed into a jungle with wildlife and strange creatures. The Xenomorphs weren't the result of the bio-transformation but had traveled on board the Onager from LV-426 with some of the survivors of the Hadleys Hope colony. This Engineer used a powerful energy rifle against the Xenomorphs and killed them in the dozens, piling up their bodies in a forest. Similar to the Engineer in the movie, he did not care for humans and killed a few with his rifle. Soon after, the angry humanoid met his match in a Predator - Ahab had come to hunt him down and successfully took his spine as a trophy. 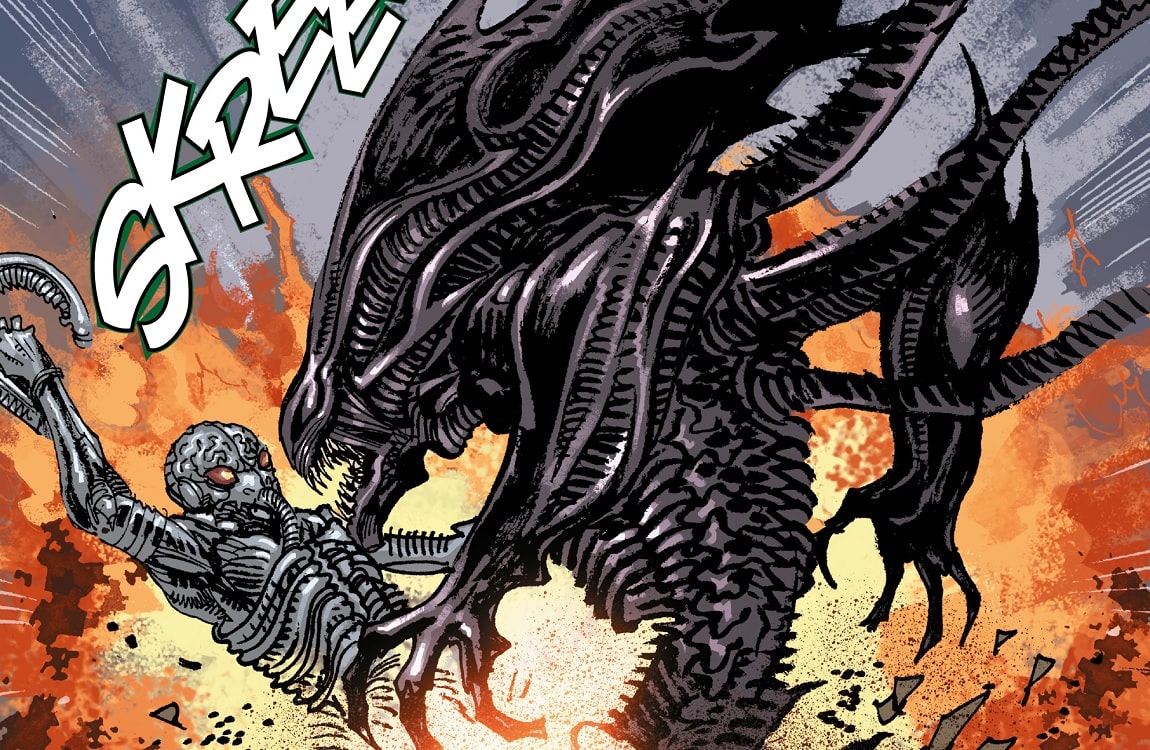 The fight between the third LV-223 Engineer and Xenomorph Queen in the Life and Death series was perhaps the biggest fight between the two species seen in the franchise. Like the 2 Engineers previously, the third Engineer was awakened in one of the LV-223 bioengineering facility stasis pods. As before, he set his sights to kill everything in sight, including Colonial Marines, Predators, and Xenomorphs. Wearing two Engineer laser rifles and standing at a mouth of an Alien hive, he was suddenly ambushed by an Alien Queen. While the Queen tried to bite him, the Engineer punched her with her fist until getting stabbed in the chest by the tail. The Queen can be considered the winner in this fight, although seemingly dead, the severely wounded Engineer returned later to exact revenge on the humans. He was finally killed with a Pulse Rifle by Captain Paget of the Colonial Marines. 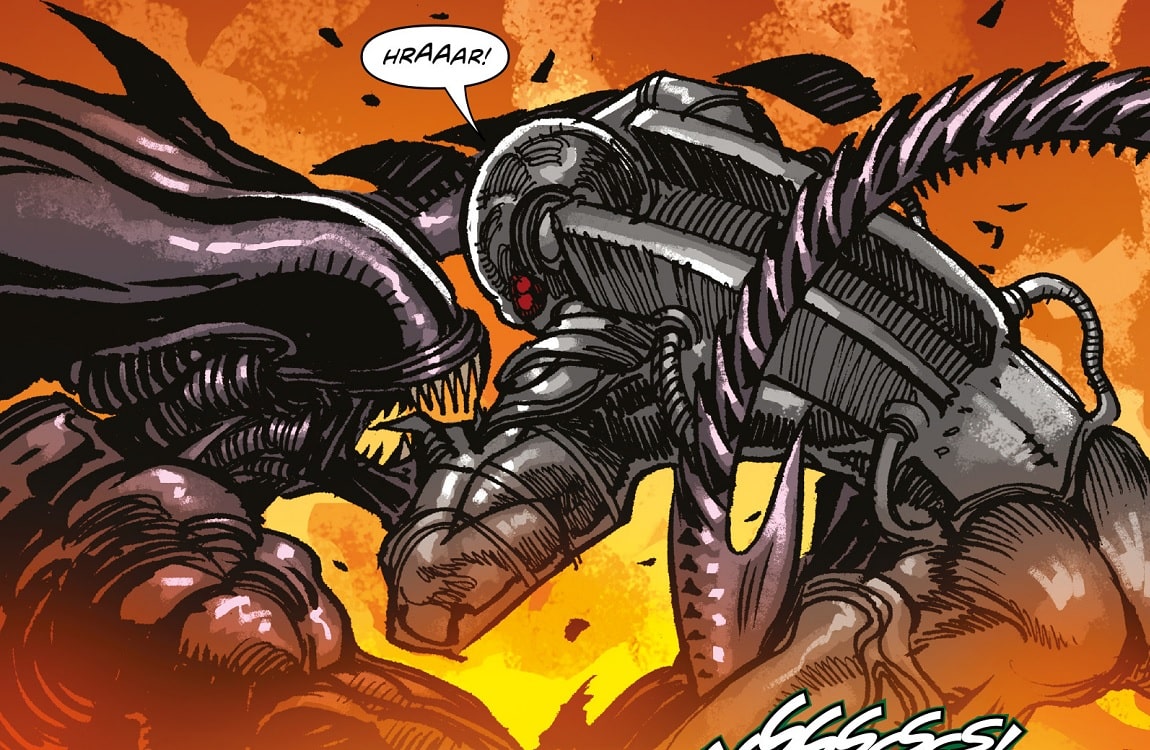 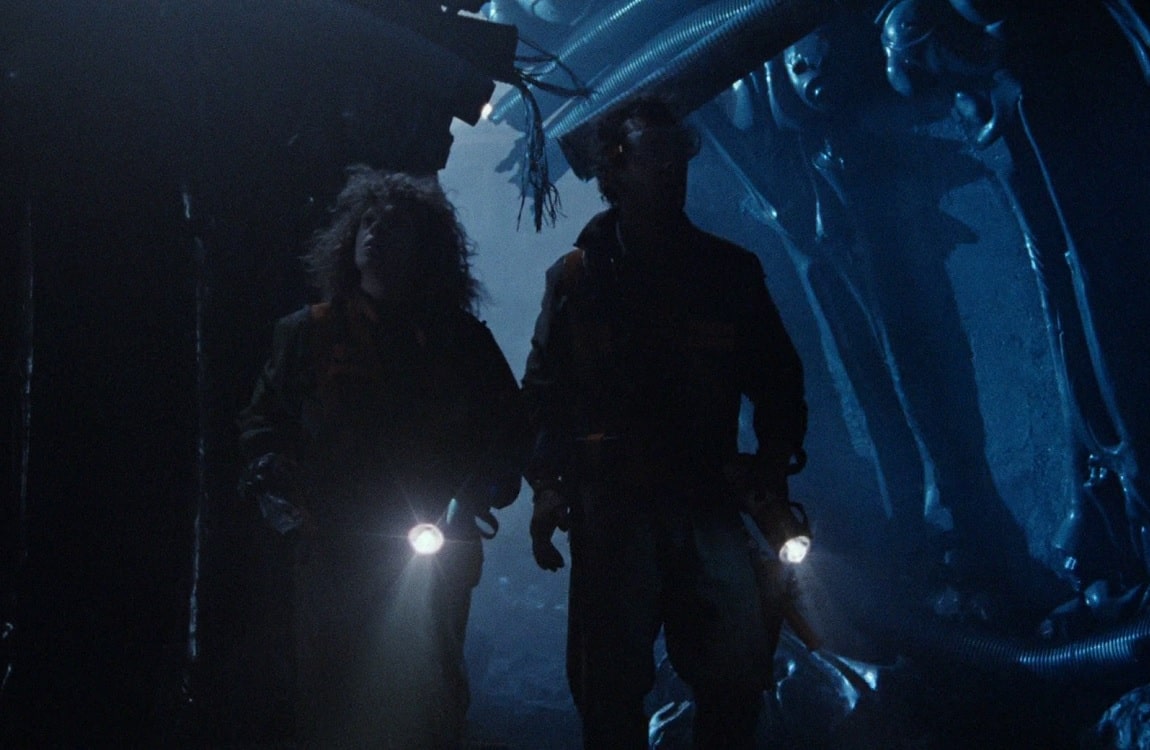 In Aliens: Special Edition, Russ and Anne Jorden explored the Derelict ship on LV-426 but we never got to see what they found inside. In the Alien: River of Pain book, it was revealed that they discovered many more Space Jockeys in the hallways, not only the dead pilot seen in Alien. One of these Space Jockeys was locked in an eternal embrace with a Xenomorph Queen, both being dead for thousands of years. Supposedly they both killed each other in a struggle. It can be speculated that the Queen was born from the pilot and rampaged through the ship, finally being killed by a remaining Space Jockey. Russ and Anne found regular Xenomorph bodies as well, until being attacked by a facehugger. 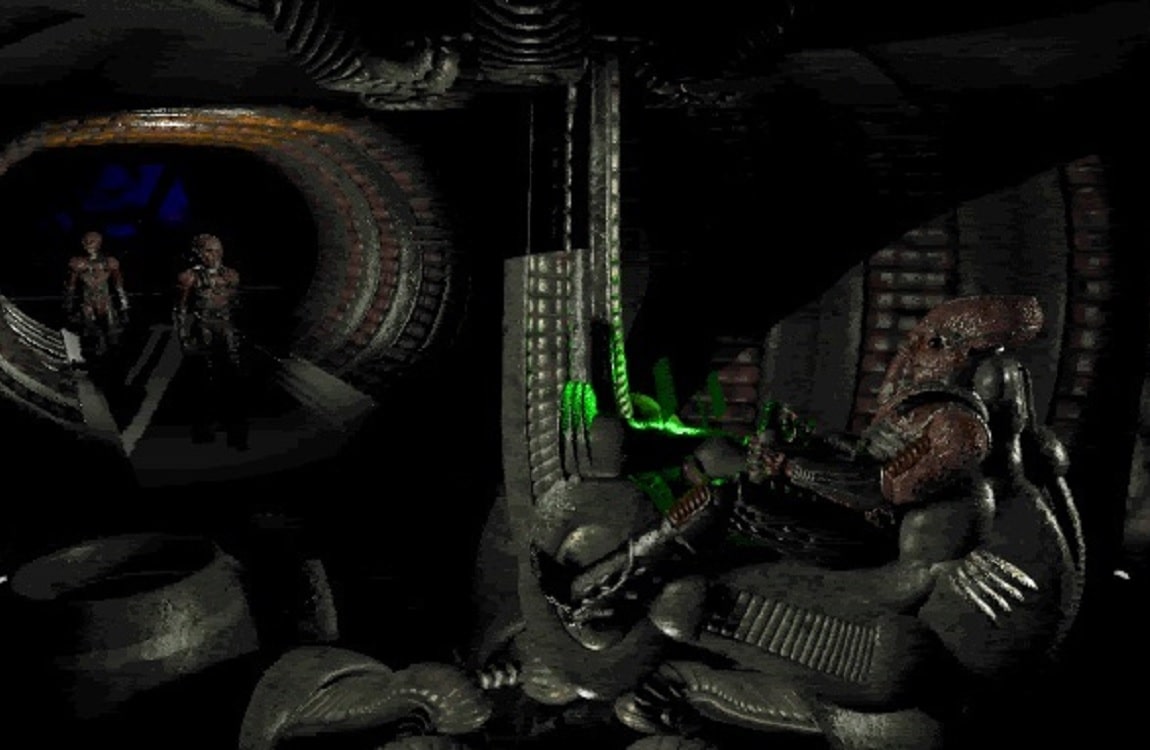 The Space Jockeys from the Aliens: Comic Book Adventure PC game didn't mess around fighting Xenomorphs in one-on-one duels. They just purified the whole planet with their powerful ship, choosing to nuke the site from orbit instead of having petty skirmishes. Probably they knew of the dangers of the Xenomorphs and their ability to survive. They were even nice enough to let the human survivors leave the planet before the purification. In the game, the Jockeys looked like space bikers and only showed up at the end, making this one of the most unique Space Jockey representations.

Want to know more about the Space Jockeys? Check out the list of Space Jockey ships and view the times that Predators fought Engineers.