In addition to human-friendly synthetics with behavioral inhibitors, several series of combat androids have been produced in the Alien series by different mega-corporations. Here is a list of androids developed for the purpose of expanding the military power of the company. Some of them are a series of mass-produced models, others are advanced and unique prototypes with more capabilities. 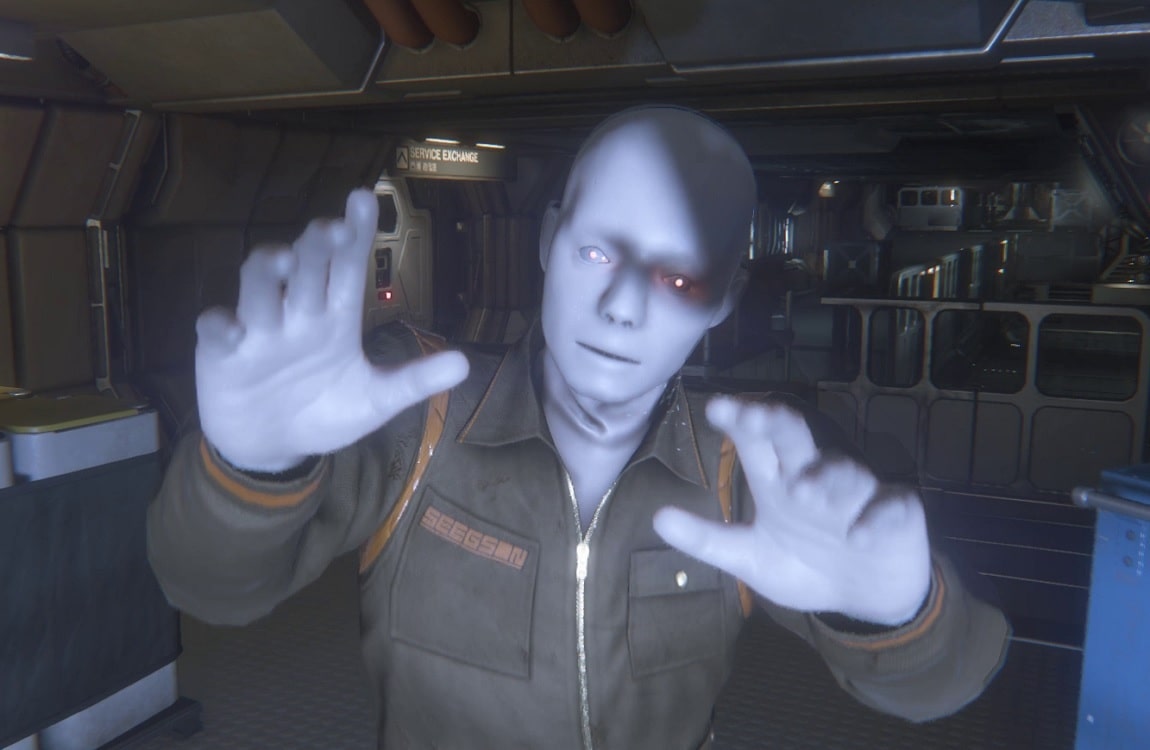 The Working Joes are not really combat androids, but rather synthetics developed for various purposes, including security. Mass produced by the Seegson Corporation, they were less advanced than the Weyland-Yutani and Hyperdyne androids. They are most well known for the Sevastopol station incident when the station Apollo AI turned them against humans. They started killing people on sight, mostly using their bare hands. The toughest Working Joe variant was the hazardous environment gear version, having extra resistance to fire and EMP blasts. They are the slowest androids on the list, and probably the dumbest as well.

The Weyland-Yutani security synthetics provided security for some of their research projects during the late 22nd century. They were armed with shotguns and could continue fighting even with severed limbs. The shotgun blasts were especially deadly to the Xenomorph player during the Aliens vs. Predator 1999 PC game. The security synthetics looked like regular humans but did not have the human aura that would have been visible to the Xenomorphs. 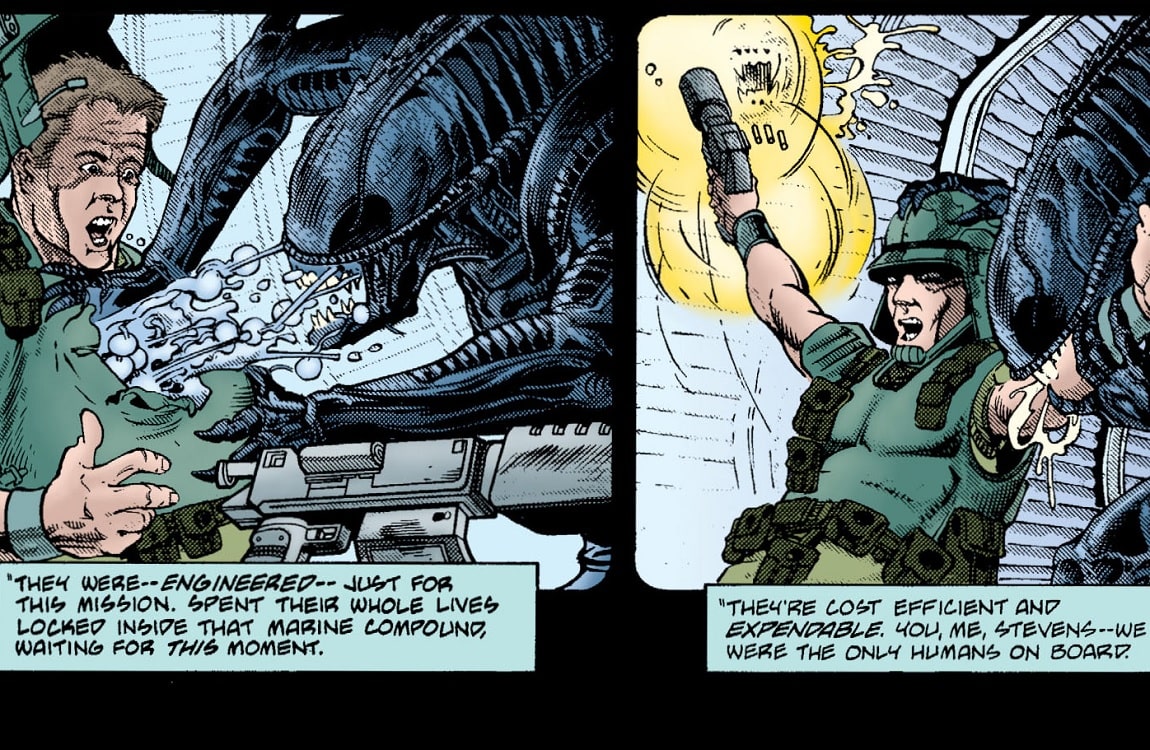 Similar to Weyland-Yutani security squads, the Colonial Marines employed their own combat androids. This was in addition to the support androids that avoided combat, like Bishop in Aliens. The combat squads used regular Colonial Marine equipment and were actually not extinguishable from regular troopers. They knew themselves that they were androids, but others often did not. Mitch Bueller from the Aliens: Outbreak series was one such android. He was ripped in half in an Aliens hive which revealed to his girlfriend Billie that he was an android. His upper body survived and provided non-combat support later in the series.

Integer 3 was a combat android released as a figure in the Aliens: Hive Wars line by Kenner. There is not much backstory for him, but he seems to be fighting along the Colonial Marines against the Alien swarm. The figure was released together with a spring-loaded harpoon gun, a face-guard and a drone-like "cyborg bug". Integer 3 is also equipped with a shoulder cannon, possibly stealing the technology from Predators. It is worth noting that the combat androids in Aliens vs. Predator 2010 look suspiciously like him. 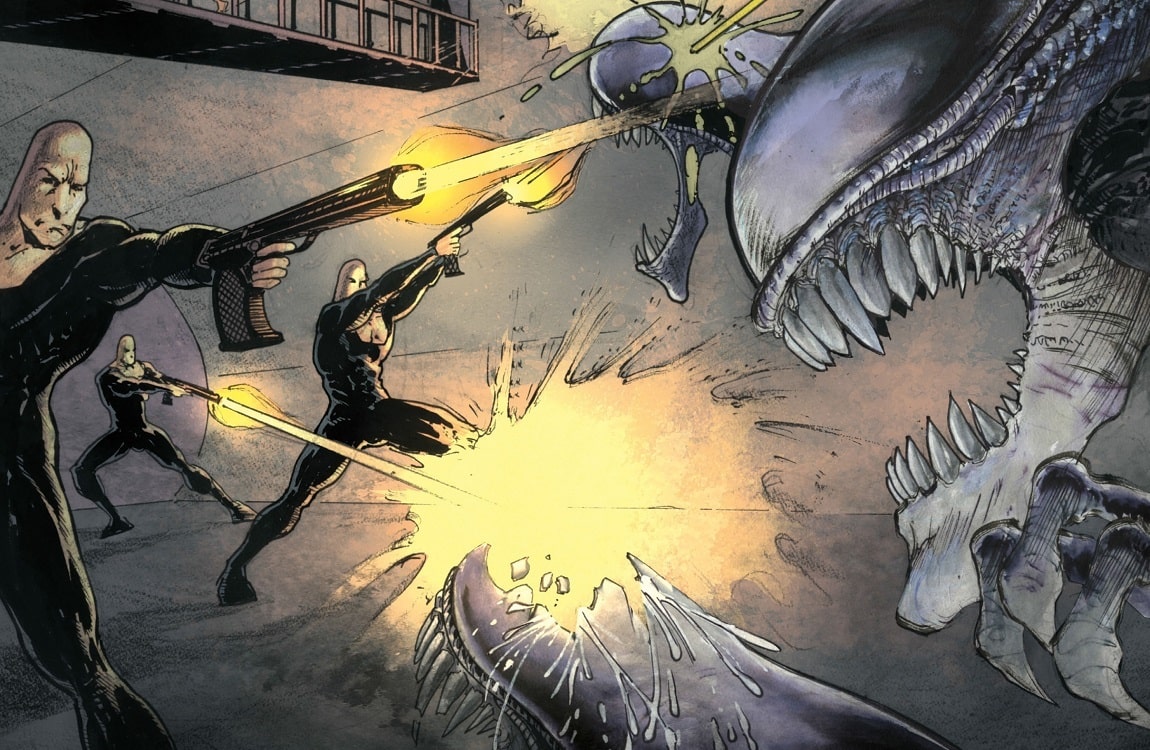 Weyland-Yutani used psychologists to teach the GB series security androids to be more emphatic and human-like. The androids were developed at the Artificial Humanoid Fabrication Plant on the planet Nivalis-4. Socialization specialist Jean DuPaul felt that the androids were treated unfairly, for example making them fight each other and being sent into Alien hives. She started an android rebellion against Weyland-Yutani and the manufacturing plant was ultimately destroyed. The GB series androids made their only appearance in the Aliens: Inhuman Condition graphic novel. 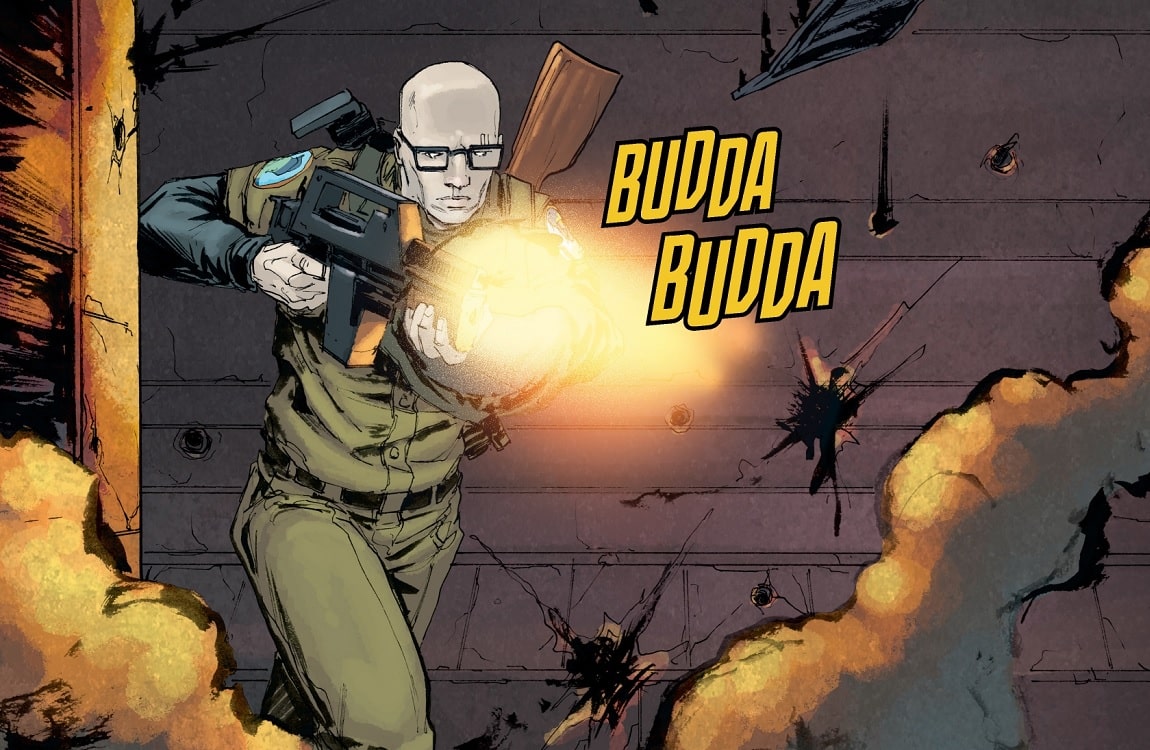 Davis One was part of the Davis series of corporate security drones employed by Weyland-Yutani. He broke through his core programming to gain free will and become more human. What is more, he became friends with Colonial Marine Zula Hendricks and turned against the company. Although he wasn't as tough as some of the other combat synthetics, he was possibly the smartest. He even survived without a body for several months when Zula uploaded him onto a memory disc until she could secure him a new body. Davis One shows up in several works from the Alien lore, including Aliens: Defiance, Aliens: Resistance and Alien: Prototype. 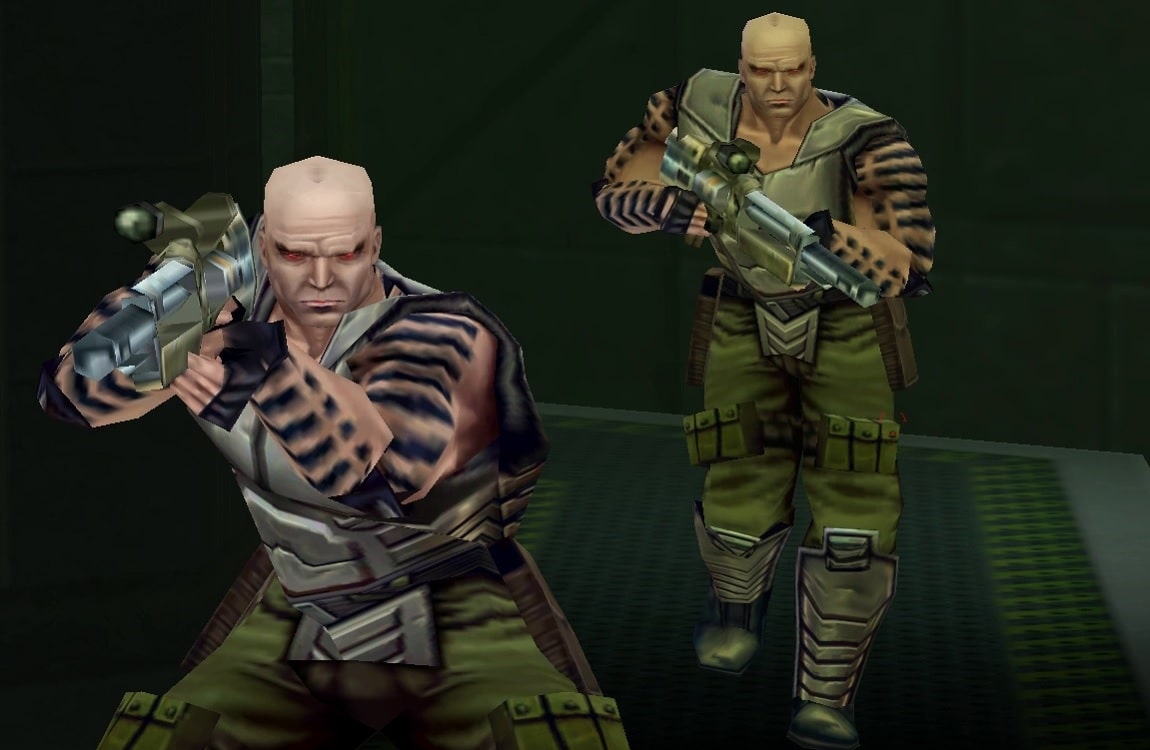 The first generation Weyland-Yutani combat androids accompanied Dr. Eisenberg on his research mission on LV-1201. They were bulky, tough and mostly employed heavy weapons like miniguns, sniper rifles and SADAR launchers. The synthetics had no issues shooting at humans when ordered to do so by their commanders. The androids are easily distinguished by regular humans by their bald heads, monotone voices, red eyes, and tattoos on their arms and heads. On top of their tough skin, they wear metallic armor as well. 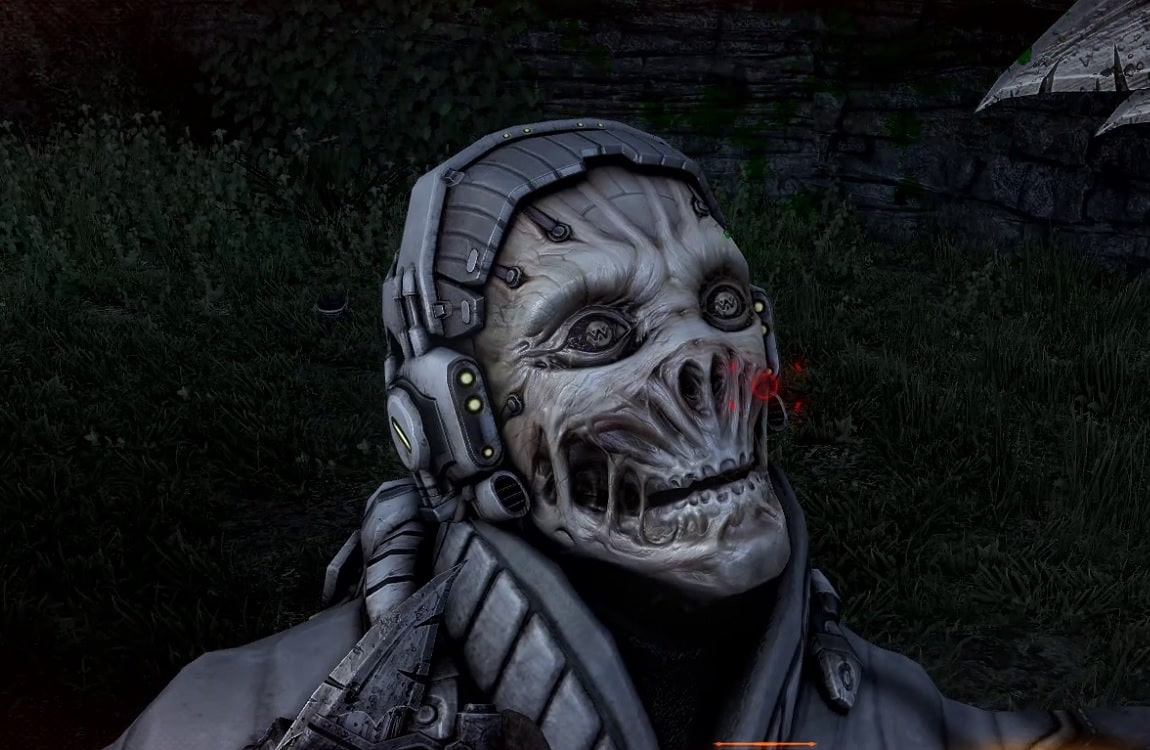 The second-generation Weyland-Yutani combat androids made their appearance in the Aliens vs. Predator 2010 video game. They were tough adversaries for the Predator and Alien players, wielding a variety of powerful weapons. Some variants of synthetics even came with a cloaking device, technology harvested from captured Predators. They continued fighting with severed limbs, even decapitations didn't not stop them from being a threat. The combat androids were part of a private army of Charles Bishop Weyland, the head scientists on BG-386 and secret android himself.

Liston was a gigantic synthetic built by Alphatech that accompanied a squad of Colonial Marines aboard the USS Melville. in the first Aliens: Colonial Marines comic series. While being passive during most of the series, he turned out to be an efficient Xenomorph killer. He was able to rip them apart by his bare hands while being resistant to Alien acid by exuding a base compound from his sweat glands. When the base of Dr. Kleist blew up killing everyone on board, Liston's damaged body was all that remained. He was able to log a final report while drifting aimlessly in space. 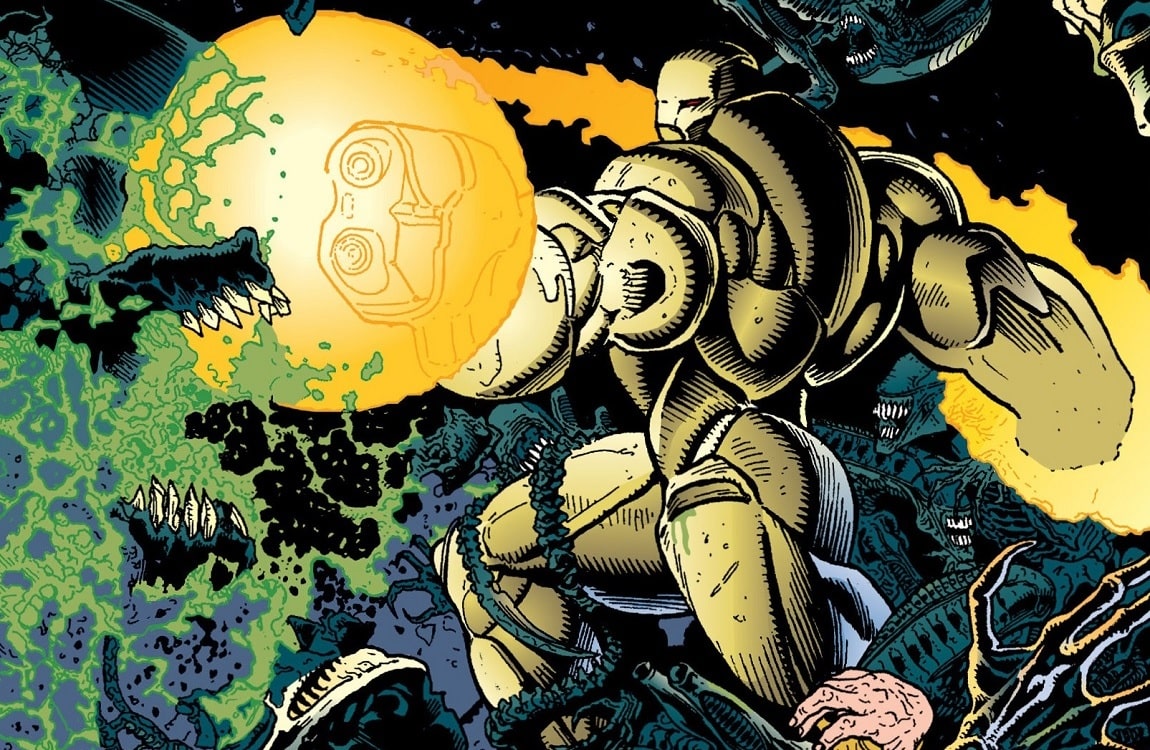 Dean made an appearance in the top 10 mech suits list, but is actually more of a combat synthetic than a fighting suit. He was a one-time prototype who was built by Dr. Nordling in the Aliens: Stronghold comic series. Dean is quite possibly the most powerful combat synthetic in the whole Aliens vs. Predator franchise, being resistant to acid and having a built-in weapons system. He didn't talk much but still had a developed personality. He even became friends with the android Xenomorph named Jeri.