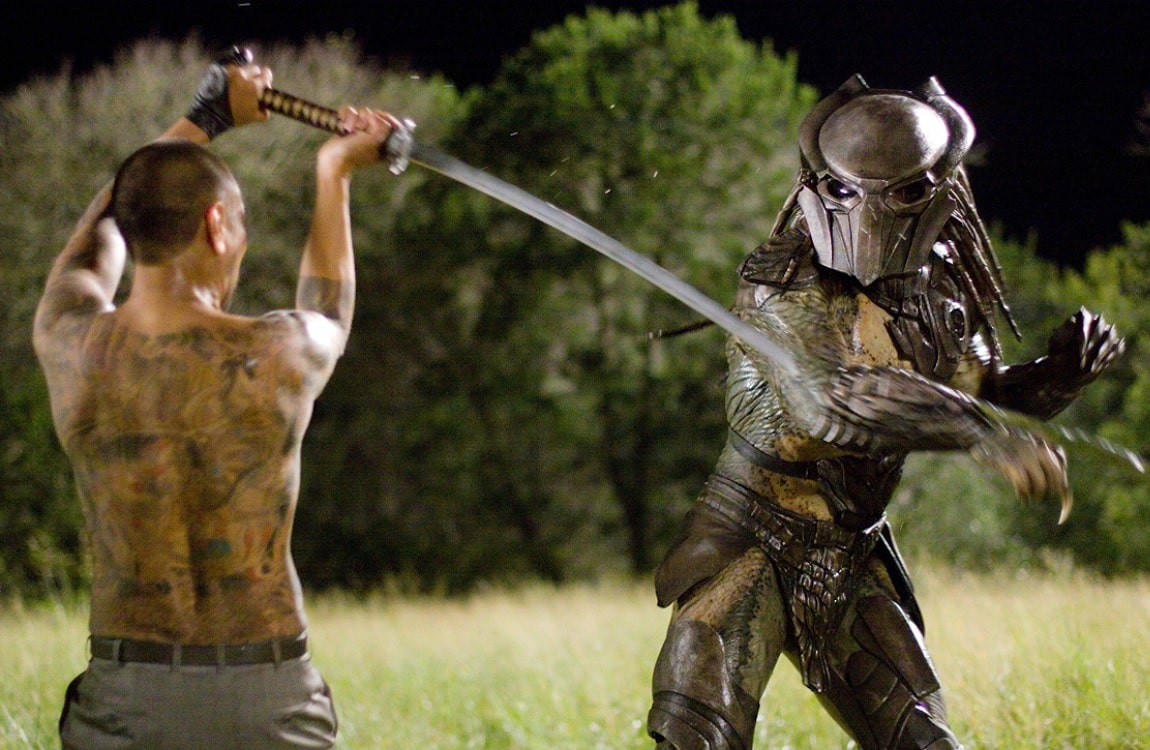 In the third Predators movie, a group of mercenaries and killers were dropped on Game Preserve Planet to be hunted by the Super Predators. One of these killers was Hanzo, an enforcer for the Yakuza and a namesake of Hattori Hanzō, a famous Samurai warrior from the 16th century. Although Hanzo wasn't necessarily a Samurai, the Yakuza do follow similar warrior principles, including wielding a katana sword. He fought the Falconer Predator on an empty grass field, giving others time to escape. He had the upper hand in most of the fight, wounding the Falconer several times. After his death blow to the Yautja, Hanzo fell to the ground dead, seemingly receiving a mortal chest wound. 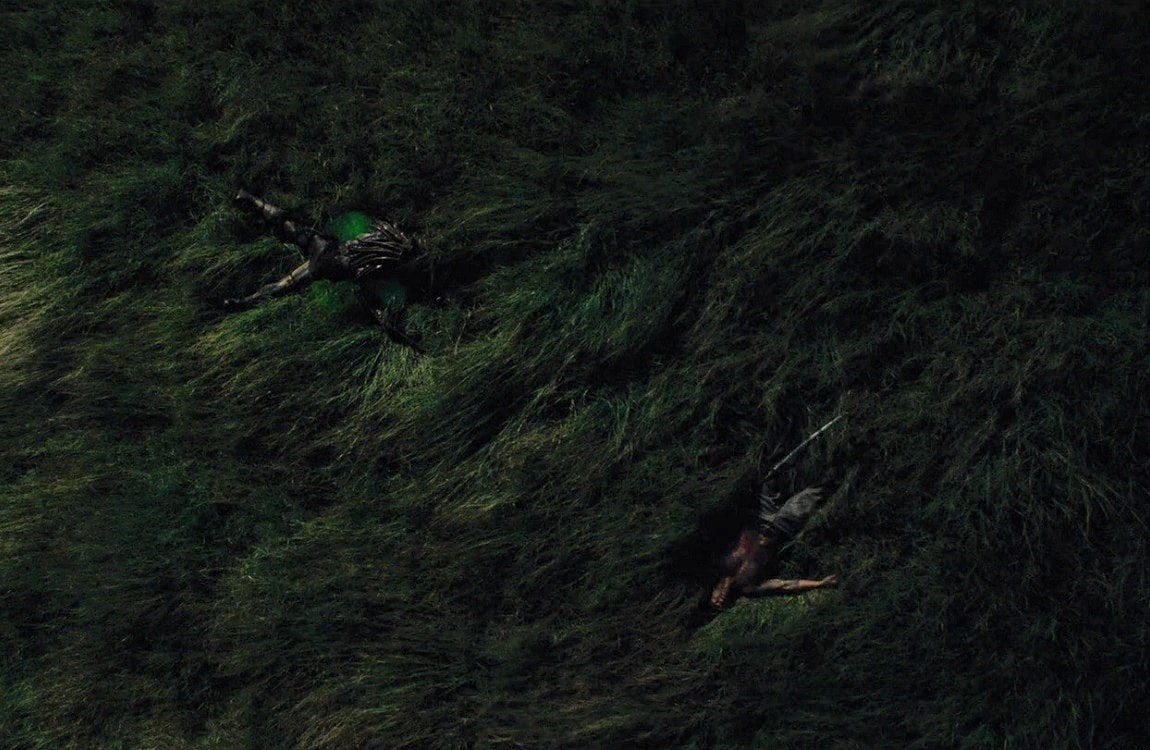 Although Hanso died dueling the Falconer Predator, his story did receive a sequel in the Aliens vs. Predators: Ultimate Prey anthology novel. In the last story of the book titled Kyōdai and written by Louis Ozawa himself, Hanzo's brother Eiji Kawakami was also kidnapped by the Super Predators and transported to the Game Preserve Planet a few weeks later. He retraced the steps of Hanzo and even reached the place where he had died while reminiscing some details from their shared past. The spot on the field now contained a shrine of sorts dedicated to the worthy warrior, including the Samurai sword that Eiji now armed himself with. Hanso's brother then had a run-in with a Xenomorph that the Berserker Yautja used as a Predator dog. He managed to kill a Super Yautja and free the Xenomorph, a rare case of an Alien shown in a more positive light than a Predator.

Predators vs. Samurai in Feudal Japan 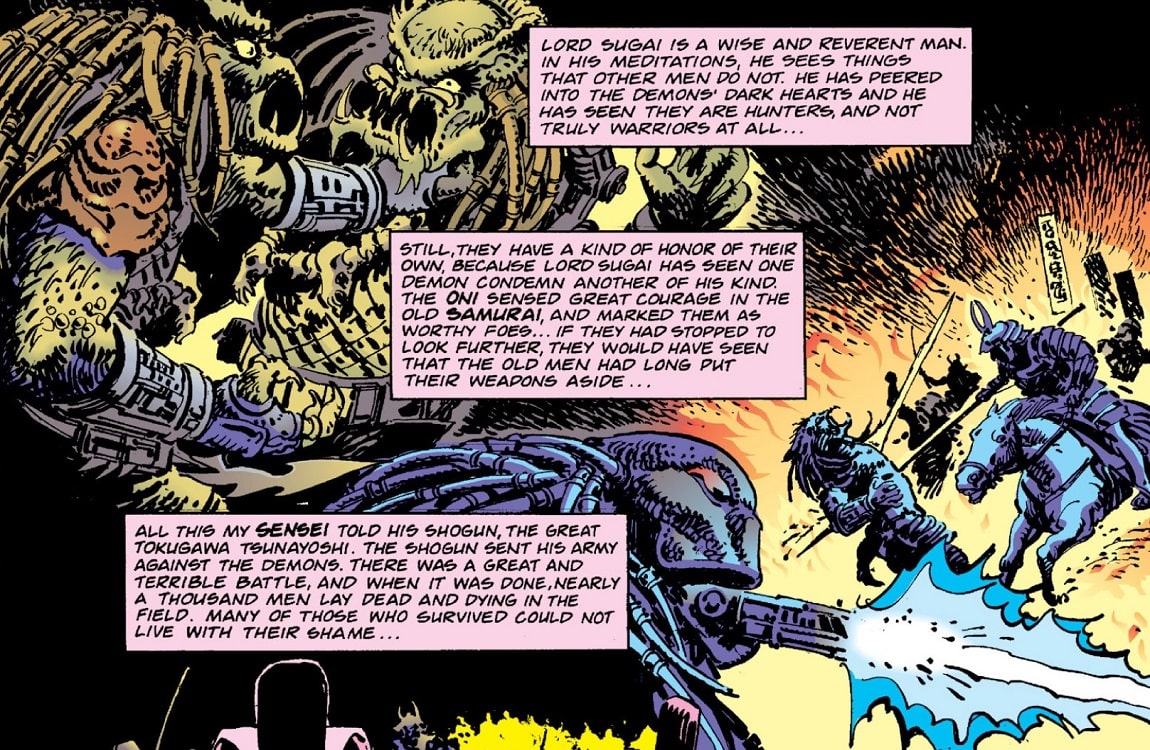 During the feudal period in medieval Japan, a clan of Predators took a big interest in the samurai, as depicted in Predator: Blood Feud. They first descended on a group of older warriors, who had already laid down their swords to pursue gentler arts. The old men fought well before they all died. To stop this great insult, a great shogun sent his army of thousand samurai warriors against dozens of Predators in battle. Almost all of the humans perished in the massacre on the plains, and so did some of the Yautja. Further steps were taken to stop any more bloodshed, which involved Juta Tanaka in the present day. 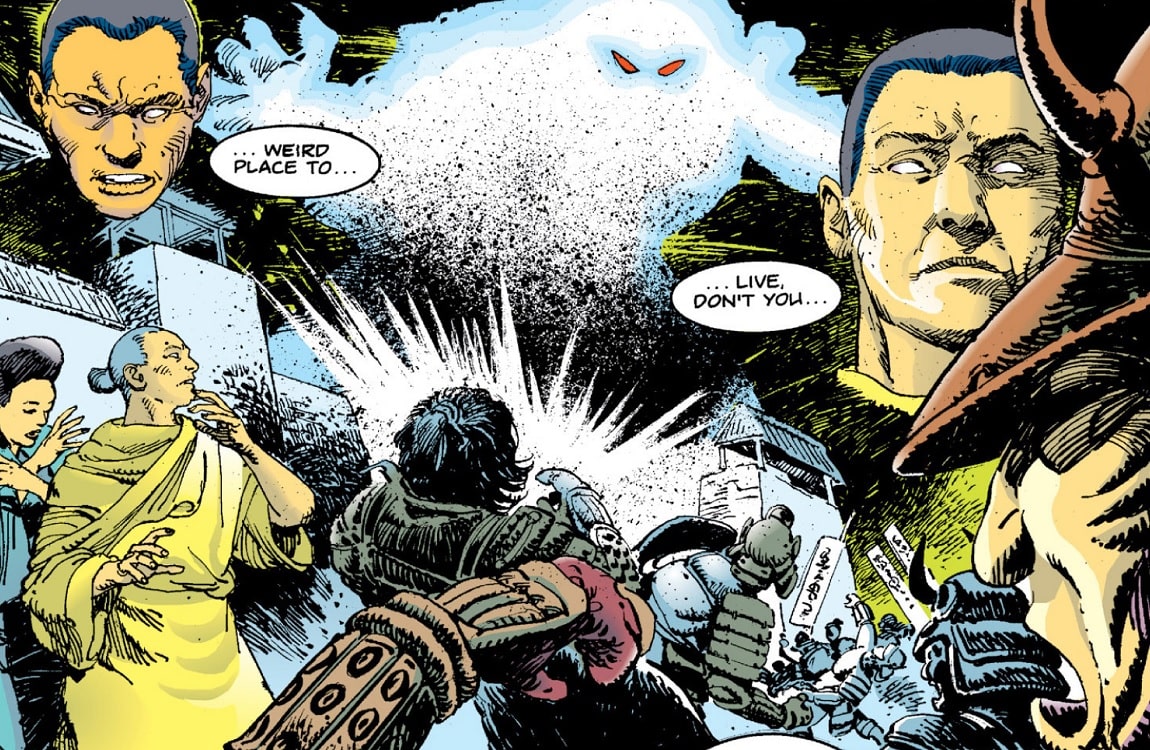 Juta Tanaka was a martial arts instructor who was blinded at the age of ten. When his students were massacred at his dojo, he started to have visions about the Predators and the samurai from the 18th century. It turned out that he had a spiritual connection to the Yautja, similarly to Enoch Nakai, a native American from Predator: Big Game. Juta Tanaka was an ancestor to the ancient Samurai and chosen to be the one who defeats them in single combat, to end the big massacres that occurred during the centuries. Soon after, he was attacked by a chosen Predator and they engaged in a katana duel. Although blind and wounded, Juta emerged victorious and was greeted by a band of Predators who indicated that the old blood feud was over. 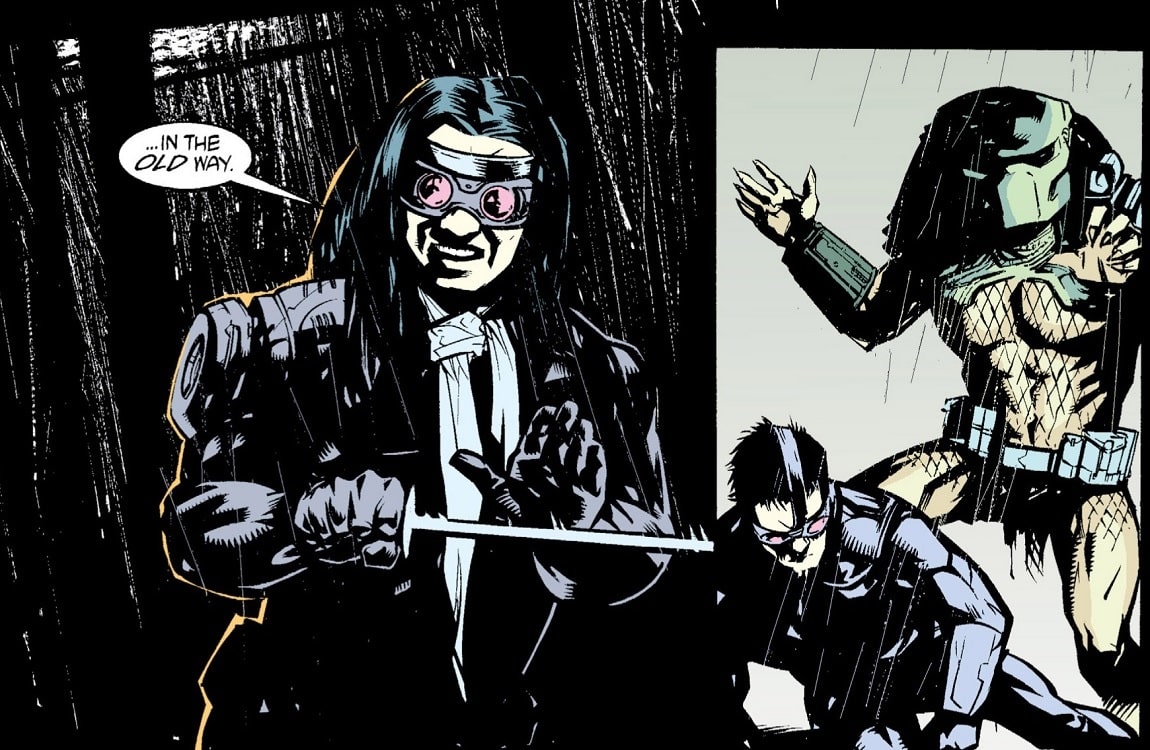 Gideon Suhn Lee from Aliens vs. Predator: Eternal was a Japanese techno-baron living in Tokyo in the near future. Secretly, he was 700 years old and had managed to prolong his life by eating body parts of the Yautja, especially their hearts. During his long life, he had embraced the Samurai warrior ways, wielding a Katana and collecting old Ronin artifacts. Gideon assembled a team of Predator hunters, to capture another Yautja, either dead or alive. Joining the team in the sewers of Tokyo, they encountered both Xenomorphs and Predators. After having a short fight with a Predator using his samurai sword, Gideon's head was taken as a trophy and his long life ended in the gutter. 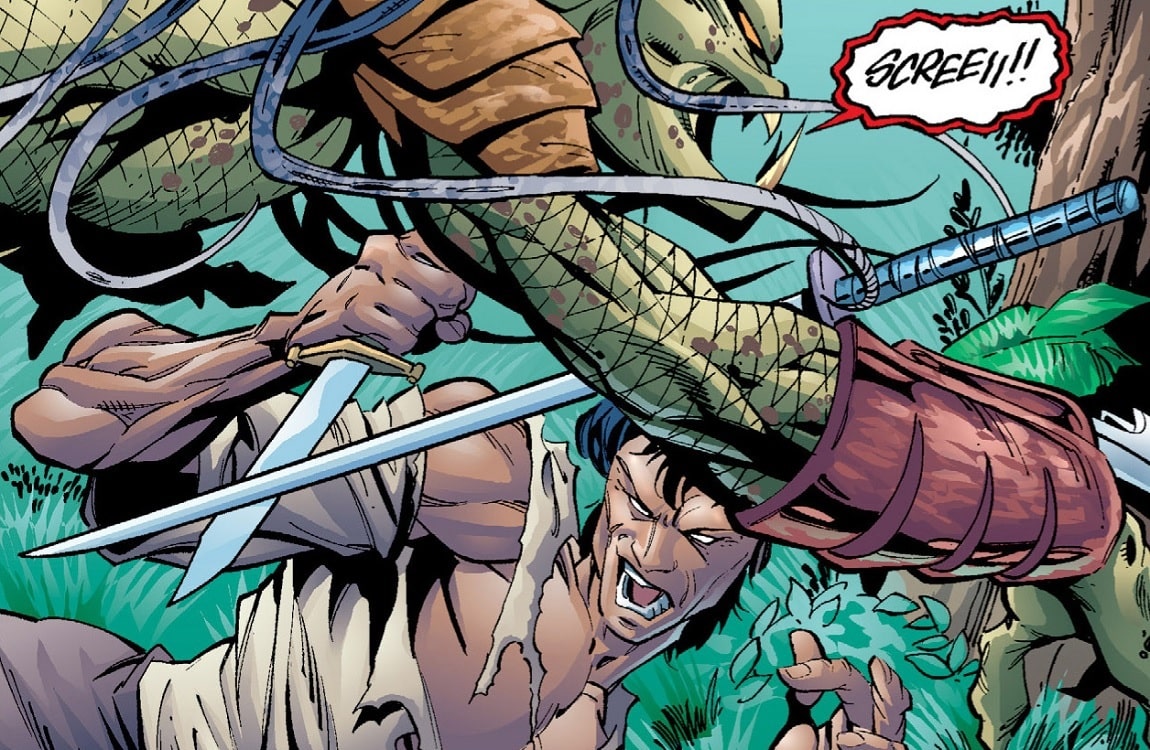 Subatai was another centuries-old samurai with connections to the Predator race, nicknamed the Dragons. As a young man, he killed a novice Yautja but was gravely wounded by his master and left for dead. A wise sensei fed him a heart of a Predator, each being able to extend the life of a human by 200 years. While being almost immortal during the present time, he still wanted revenge on the Yautja. He had his chance in Predator: Xenogenesis, while helping out the Predator hunter team named Spearhead. Subotai and the master Predator had a duel with katanas in an ancient forest. Surprisingly, the duel did not end with a death, Subotai sliced off the Yautja's hand and the Dragon escaped. 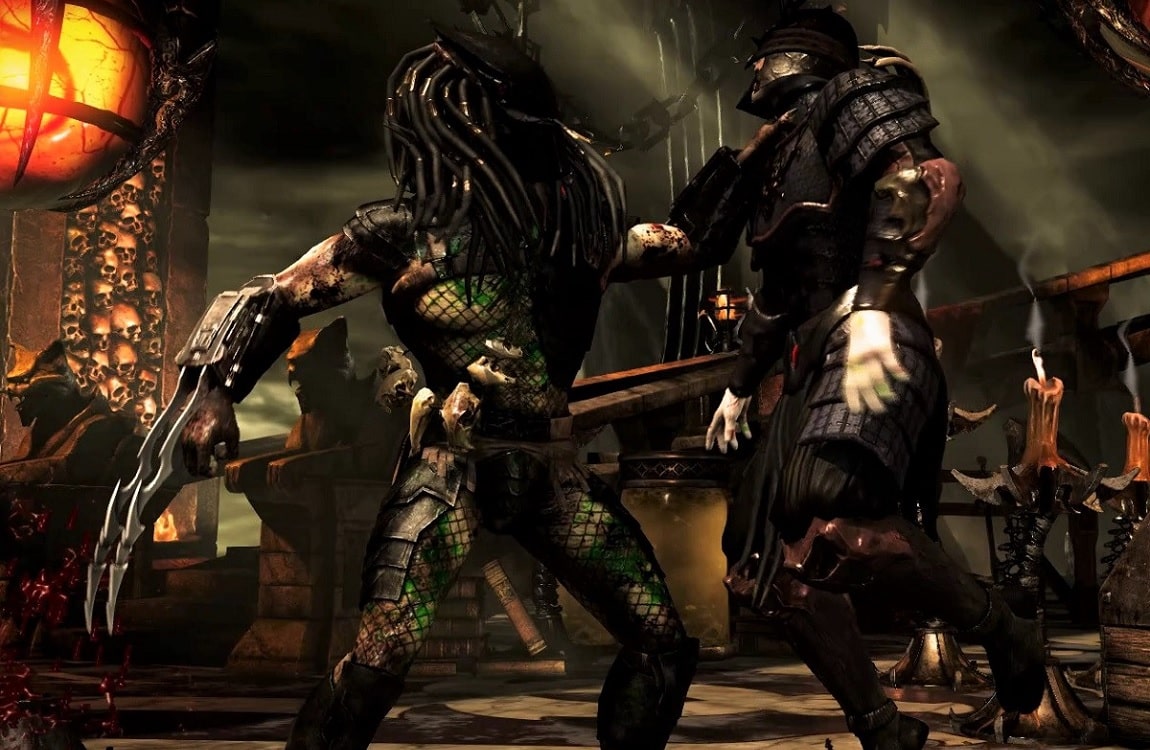 The Mortal Kombat Predator appeared as an add-on character in Mortal Kombat XL together with the Xenomorph. About the same time, the Samurai Pack was released, enabling Samurai and Ronin skins for Shinnok, Kenshi and Kitana Jingu. In the storyline of the game, the Predator fought through the bloody tournament to reach Shinnok, an Elder God of Death. After defeating him in a brutal duel, the Yautja became the Apex Predator, gaining the power of sorcery and starting a mass slaughter through all the realms. 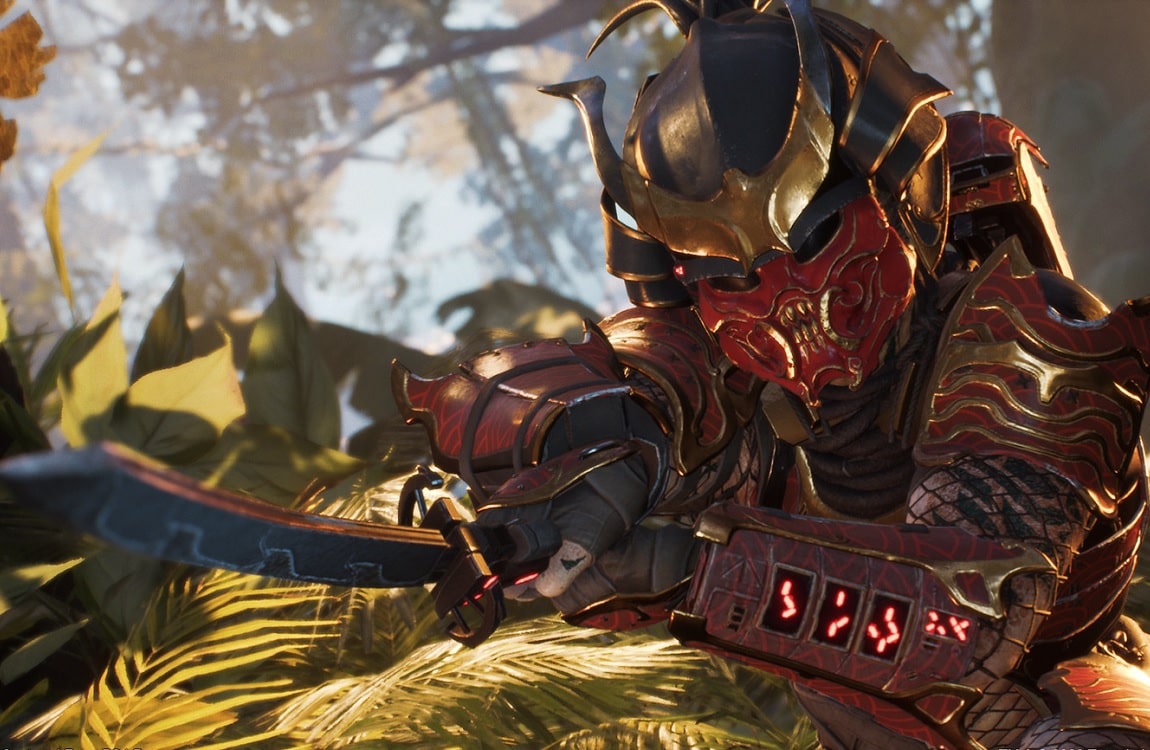 At one point, the Predators loved the Samurai so much that some of them started to dress up like them. The Samurai Predator appeared in Predator: Hunting Grounds as a playable character class in a downloadable content pack (DLC). The game is multiplayer-focused, and the little back story there is hints at a Japanese legend of a demon falling from the sky on the hottest days. Each year, scores of Samurai warriors would fall to this demon and these hunts would last for centuries. The Samurai Yautja came with the Predator Katana, a weapon built specially by the species, and not a trophy that was taken from a fallen human. 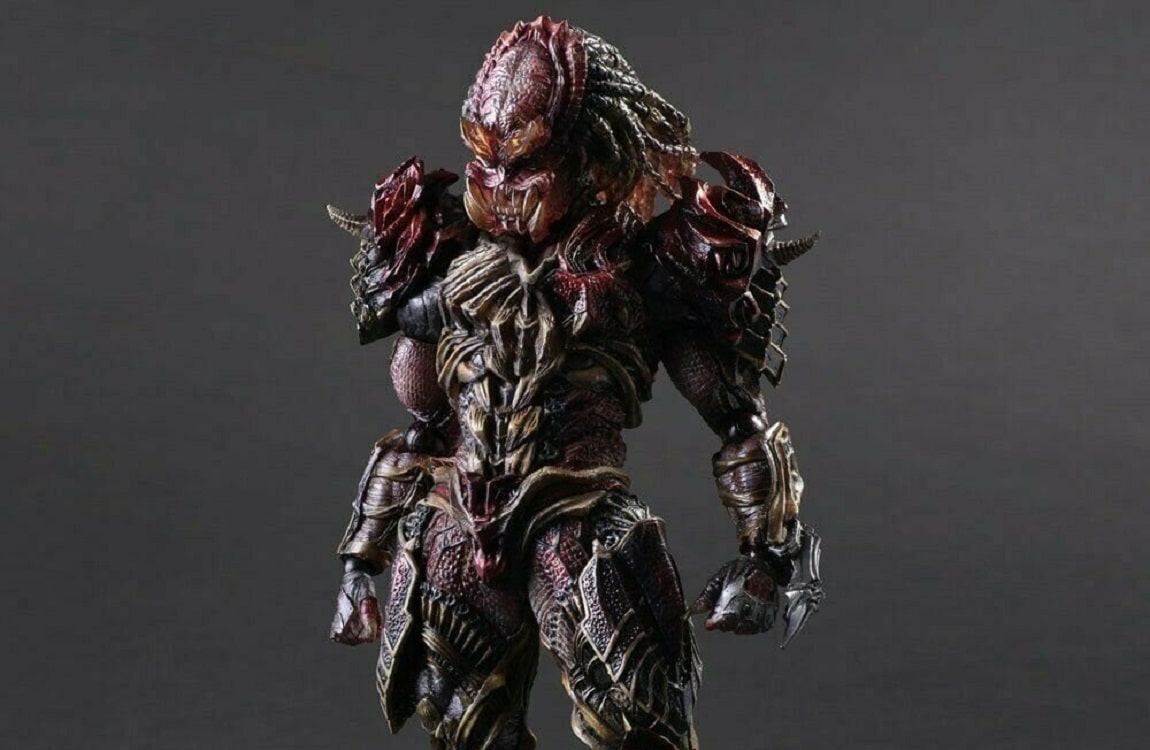 The Predator: If It Bleeds anthology book contained many stories set in Earth's past, one of which was Three Sparks, which was set again during the period of feudal Japan. An oni (demon) had been terrorizing an area near a forest, butchering any warriors sent to stop it. Minamoto Yoritomo (a real person from Japan's history) sent a disgraced samurai named Nasu Hiroto to investigate. In an epic battle that involved a forest fire, being shot by arrows and being covered in mud, the Predator was stopped and sliced to death with a katana. Yoritomo was pleased with Hiroto's deeds and promoted him to lead a new order of assassins using the oni's tactics - the ninja. Sideshow Collectibles also released a Predator figure called the oni, connecting to this story. 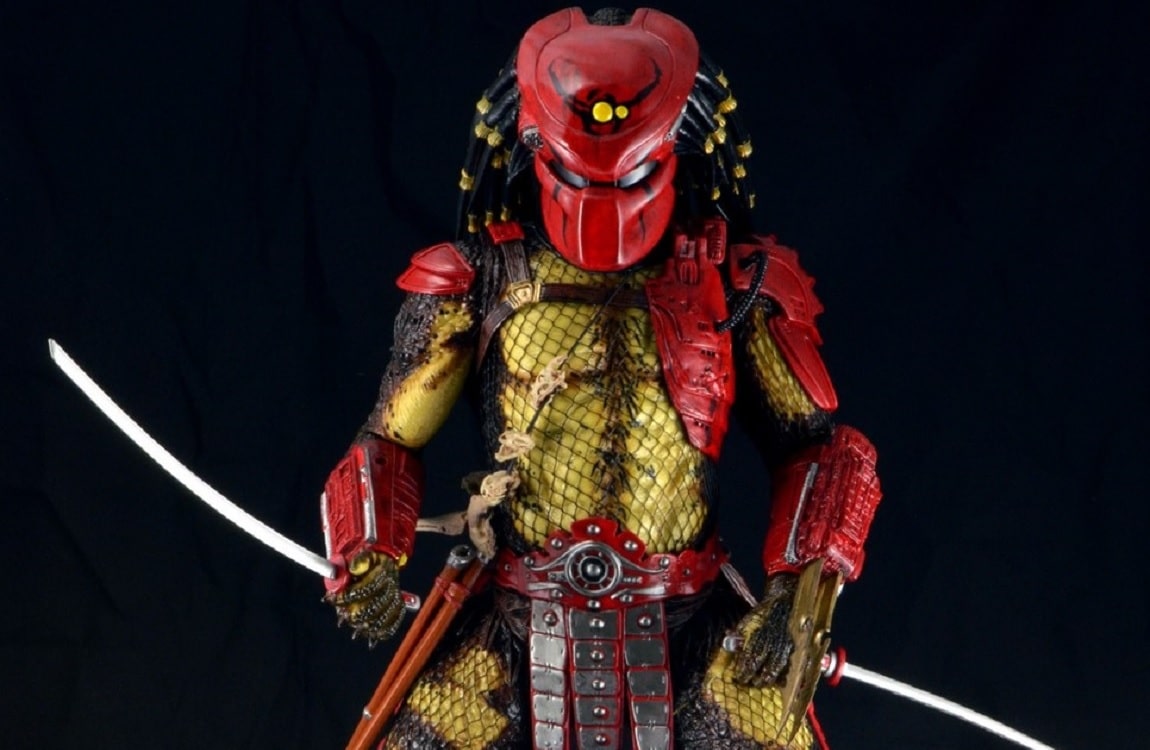 The Big Red Predator was another Yautja who loved to cosplay as a Samurai, having an affinity for the Japanese warrior culture. He first appeared at the end of an unofficial fan film titled Batman: Dead End, seemingly coming to Gotham City to fight the Dark Knight. NECA later released a figure out of this popular Predator, making him semi-official. Big Red came with two Katana swords, an ornamental belt and, golden wristblades, which were untraditionally placed on his left gauntlet. 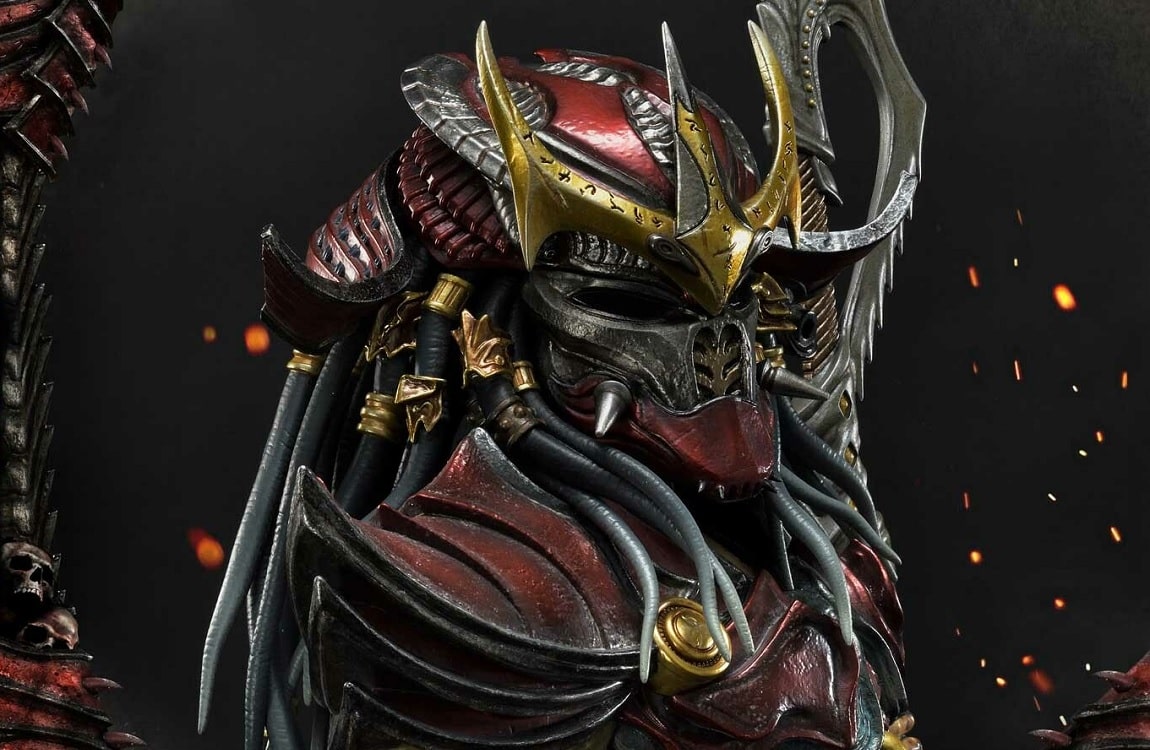 The Sengoku period in Japanese history was of near-constant civil war, social upheaval, and intrigue, lasting from 1467 to 1615. The Sengoku Predator was another Samurai obsessed Yautja who was particularly interested in that period, wearing a fanciful and heavily decorated armor. This Predator was released by Prime 1 Studio as an expensive but highly detailed statue. He came with a spinal cord in his right hand, a huge spear in his left, and a removable mask. He was supposedly based on a Dark Horse comic series, but this specific Predator has not appeared in any graphic novel story. 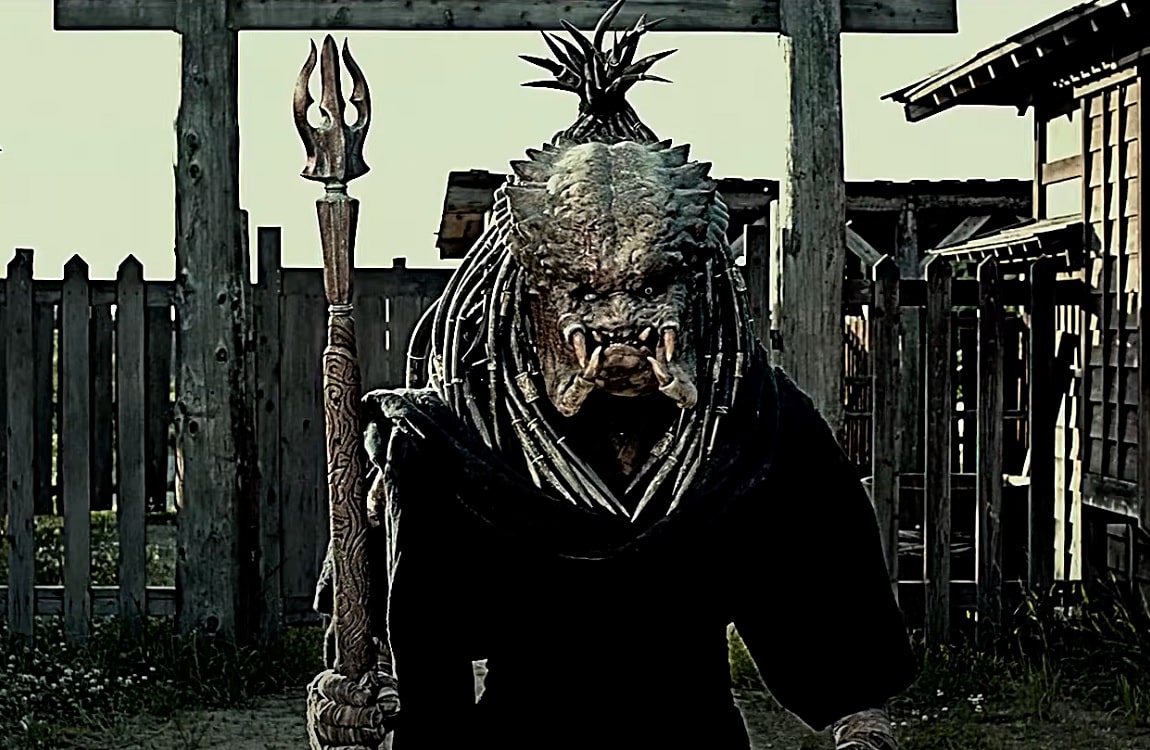 One cannot describe Predator and Samurai encounters without mentioning the awesome fan film Zatoichi vs. Predator (also titled ZvP). Produced by Blast Inc. and released in 2017, this short film trailer is a mixture of a historical samurai film from the 50ties and a sci-fi actioner. In the story, a blind samurai named Zatoichi is attacked by a group of crazed assassins, including a cyborg and a special force ninja nicknamed Binocular. At the end of this fight, another mysterious assassin appears, wielding superior speed and strength. This is revealed to be a Predator, wearing a Samurai disguise. Somehow it even gets crazier, when Zatoichi grabs a lightsaber sword, and the Predator attacks in his full Yautja armor. Unfortunately, the fight ends in a cliffhanger fashion as common for a trailer, however, the full movie would never be released.

Want to know more about the Predator expanded lore? Check out the list of the times that Batman fought Predator and take a look at the most effective young blood Predators.