In addition to the question of chestburster removal possibilities, the matter of facehuggers being removed before embryo implantation has been intriguing from the first movie. This procedure has been attempted in several cases with mixed results, depending on the capabilities of the host and the speed of the removal. Here is a list of notable facehugger removals, including both successful and unsuccessful attempts. 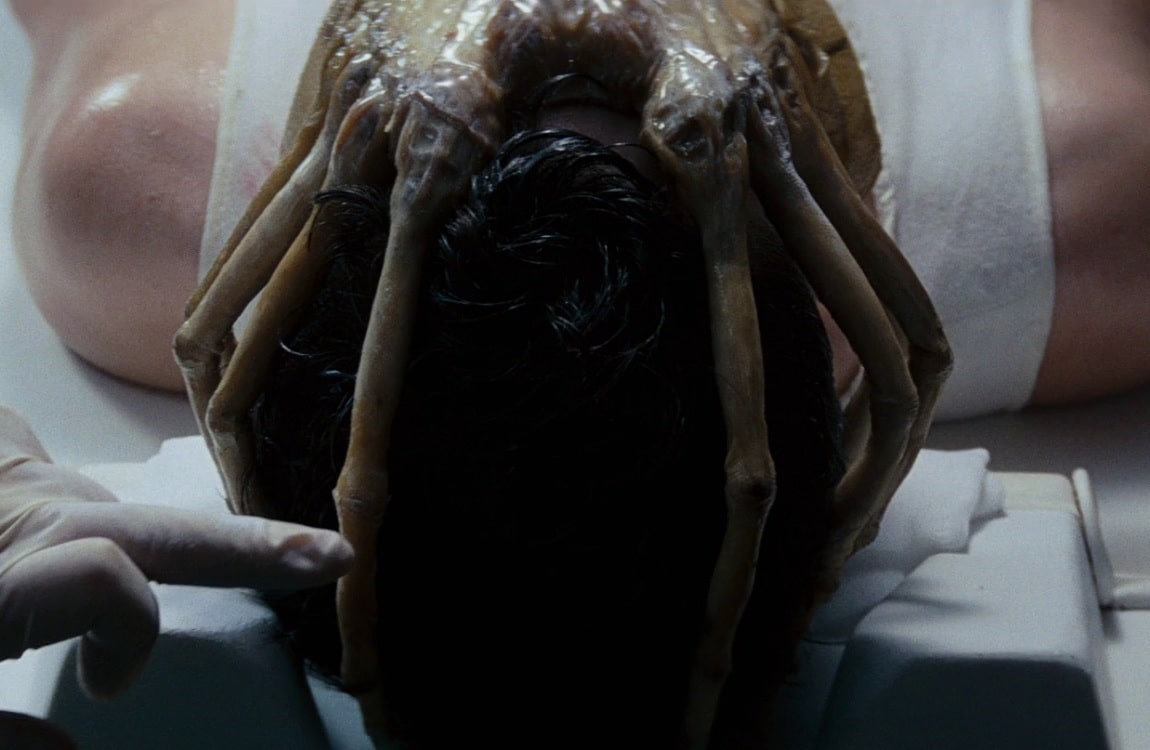 The first and most well-known facehugger removal attempt from the franchise happened in Alien. Dallas and Ash tried to cut off Kane's facehugger with a laser scalpel, starting with one of the finger joints. It immediately bled acid that burnt through several decks of the Nostromo. Any further attempts were aborted in fear of hurting Kane and the creature came off itself soon after. The facehugger died, having served its purpose. It is doubtful it had made a difference if Ash and Dallas would have been successful with cutting the facehugger off, it had already been on Kane a long time and most likely inserted the embryo already. 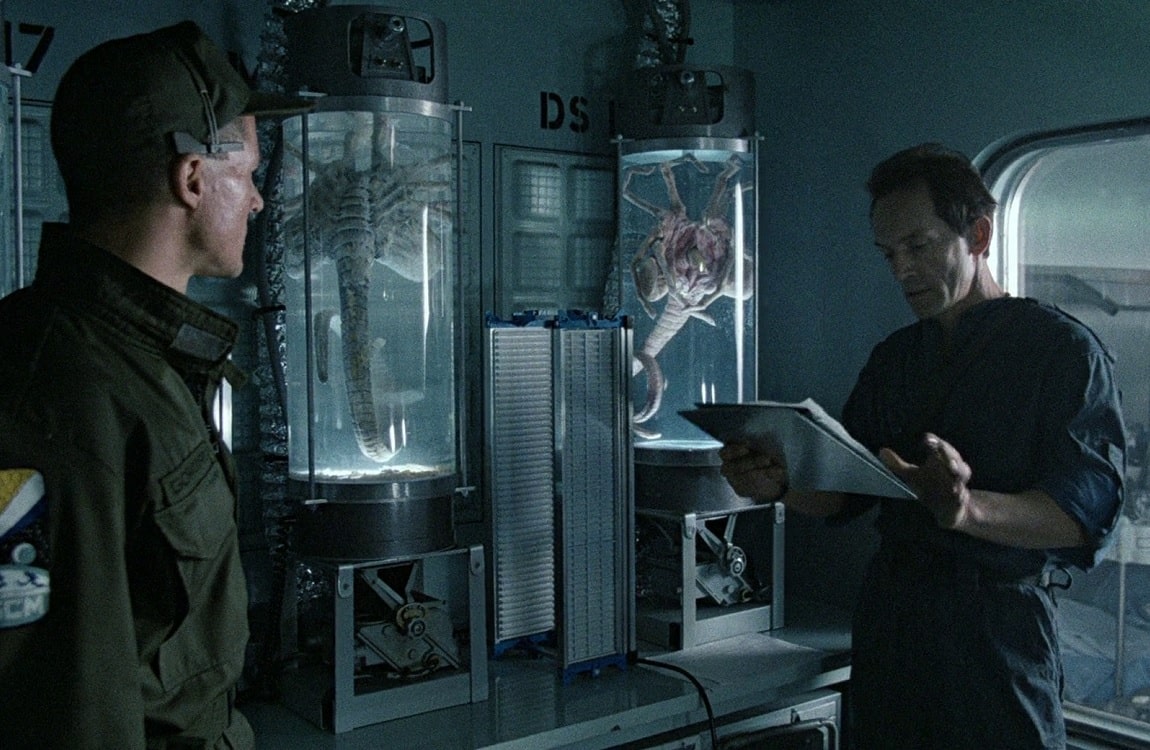 Before the main events of Aliens, the colonist at Hadley's Hope encountered multiple facehuggers originating from the Derelict Ship or the atmosphere processor hive. When a colonist named John Marachuk had one attached to his face, the medical team tried to take it off before embryo implantation. The facehugger either bled acid or choked the man with its tail, killing him. This information was read from a report later by Bishop in the medlab, establishing the near impossibility of removing a facehugger. It is also probable that this particular facehugger lived and was one of the 2 live ones in the stasis tank or more likely one of the dead ones. 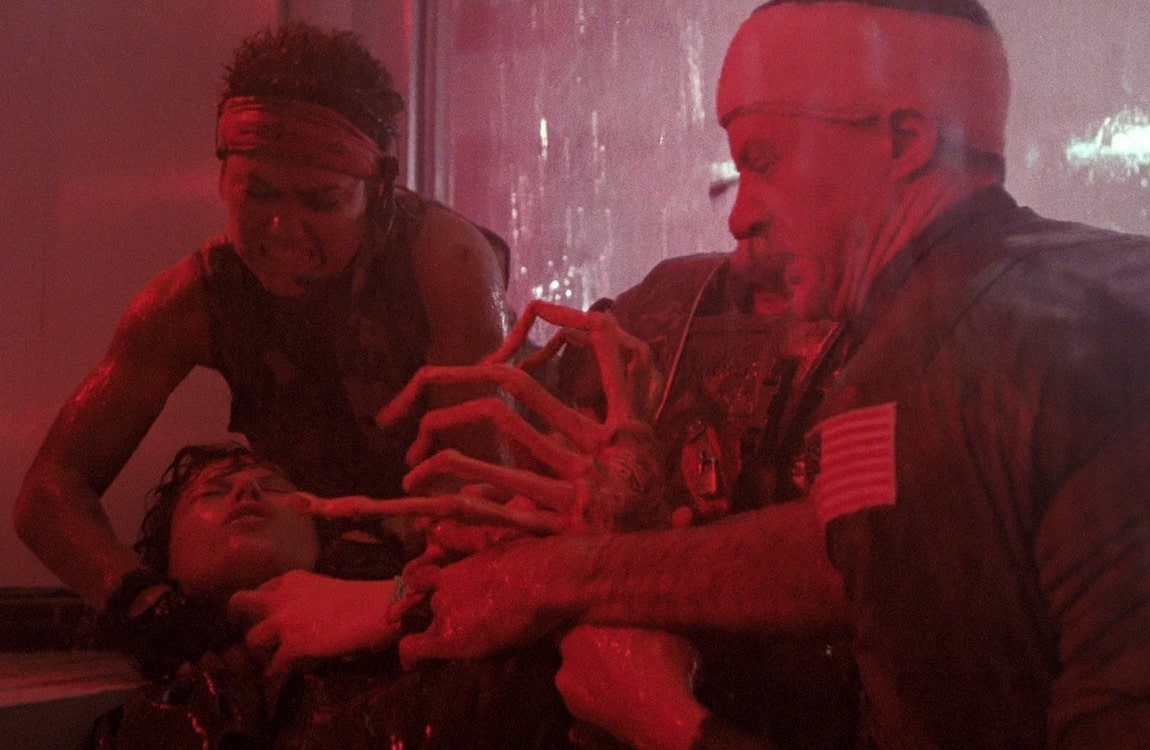 Ellen Ripley (and her clone) had several run-ins with facehuggers during the long Xenomorph killing career. After Carter Burke released two facehuggers in the Hadley's Hope medlab to go after Ripley and Newt, they fought back and managed to evade the creatures until help arrived. One of the facehuggers wrapped its tail around Ripley's throat and was close to hugging her face, but the trio of Vasquez, Hicks, and Gorman held it back. Altogether it took four people to remove this one facehugger that was close to succeeding. Vasquez shot the creature with her Pulse Rifle and Hudson blasted the other. 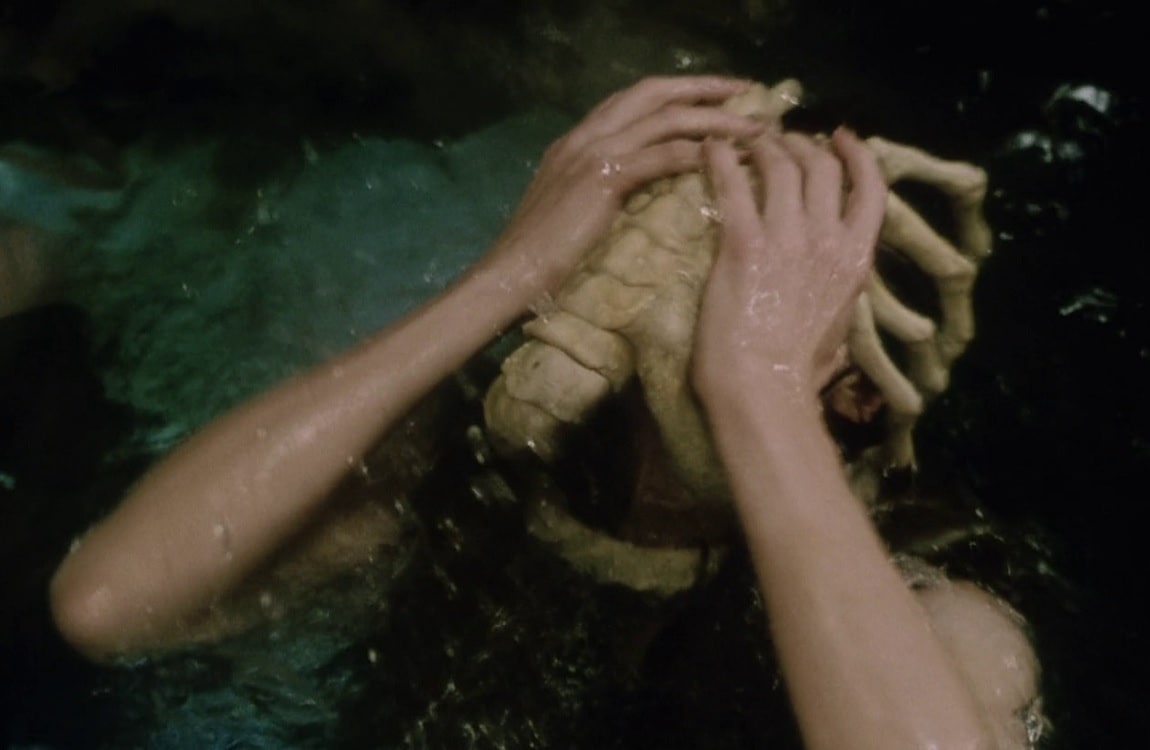 Being a human-Xenomorph hybrid with super strength (who had already carried a chestburster) did not stop Ripley 8 from being facehugged. In the underwater section of Alien: Resurrection, she was facehugged when submerging from the coolant water into the trap laid by the Xenomorphs. The facehugger was on her for about a minute and any ordinary human would have fallen unconscious. However, Ripley was able to bite its tail off and kill it (perhaps she also bit off its tongue). The facehugger certainly made a poor choice in choosing a victim and its efforts weren't enough to re-infect Ripley 8. 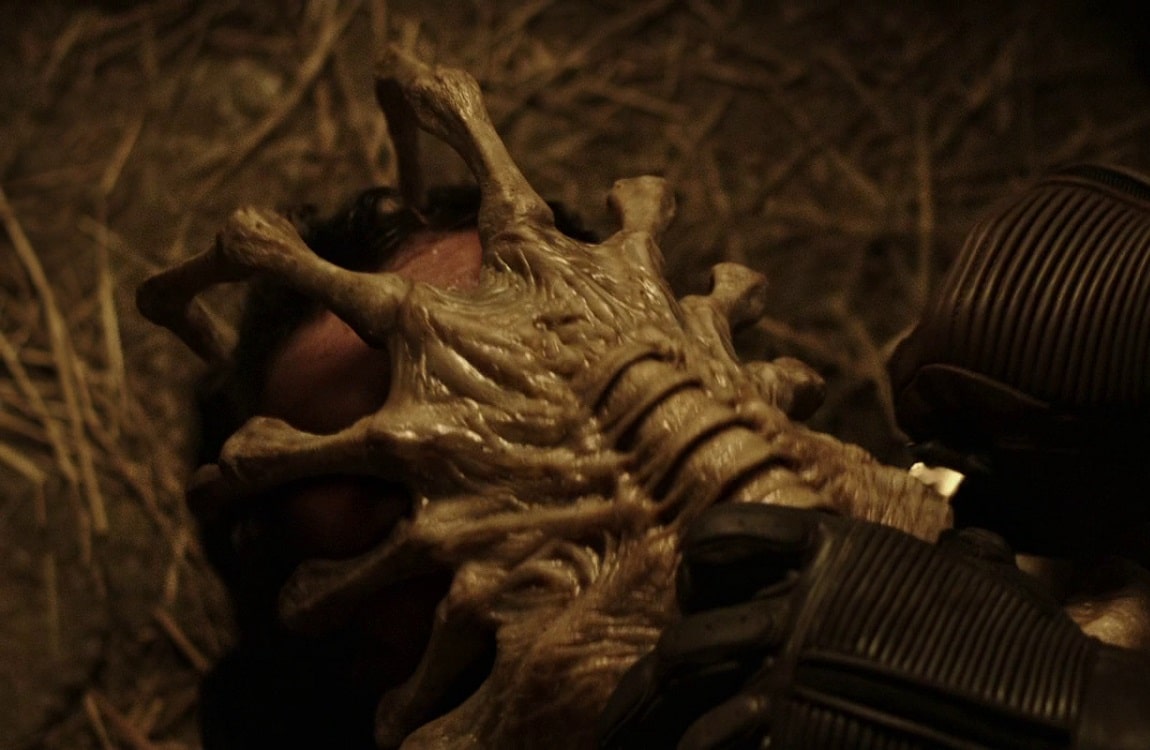 The facehugging case of Dan Lopé from Alien: Covenant was a controversial one. The facehugger was on him for less than a minute but had already managed to impregnate the man. Private Cole stabbed the creature with his knife, and it came off relatively easy, bleeding on Lopé's face in the process. The acid burns were the least of his problems, as a Protomorph chestburster was already growing inside him. The Alien was born on the USCSS Covenant soon after they escaped from the planet. This case shows that a facehugger can impregnate a host very quickly, but it was also a slightly different facehugger engineered by David. 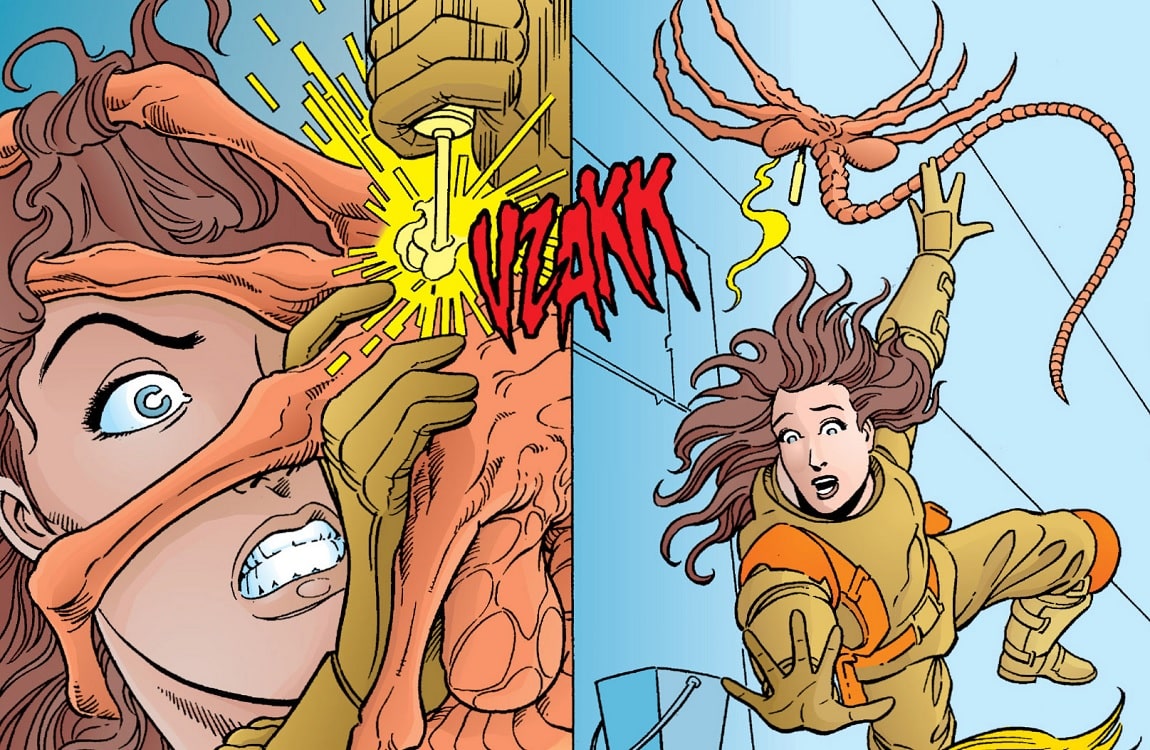 The Berserker units were small Colonial Marines squads with specialized equipment and tactics to deal with Alien hive sterilization. One of their way of operating was to let their pointman be captured and brought deep inside a Xenomorph hive, close to the eggs and the Queen. After being cocooned, another marine in power armor would home in on the pointman's location and rampage through the hive to get to him. The pointman had to hope that a Xenomorph would be unable to tear their acid-resistant facehugger prevention mask off. When not wearing their masks, the Berserker squad was great at evading facehuggers as well. Lieutenant Lara was able to push a facehugger off her face by burning it with a welder. These Berserker units appeared in both Aliens: Frenzy and Aliens: Tribes.

Facehugger Removal in Aliens vs. Predator 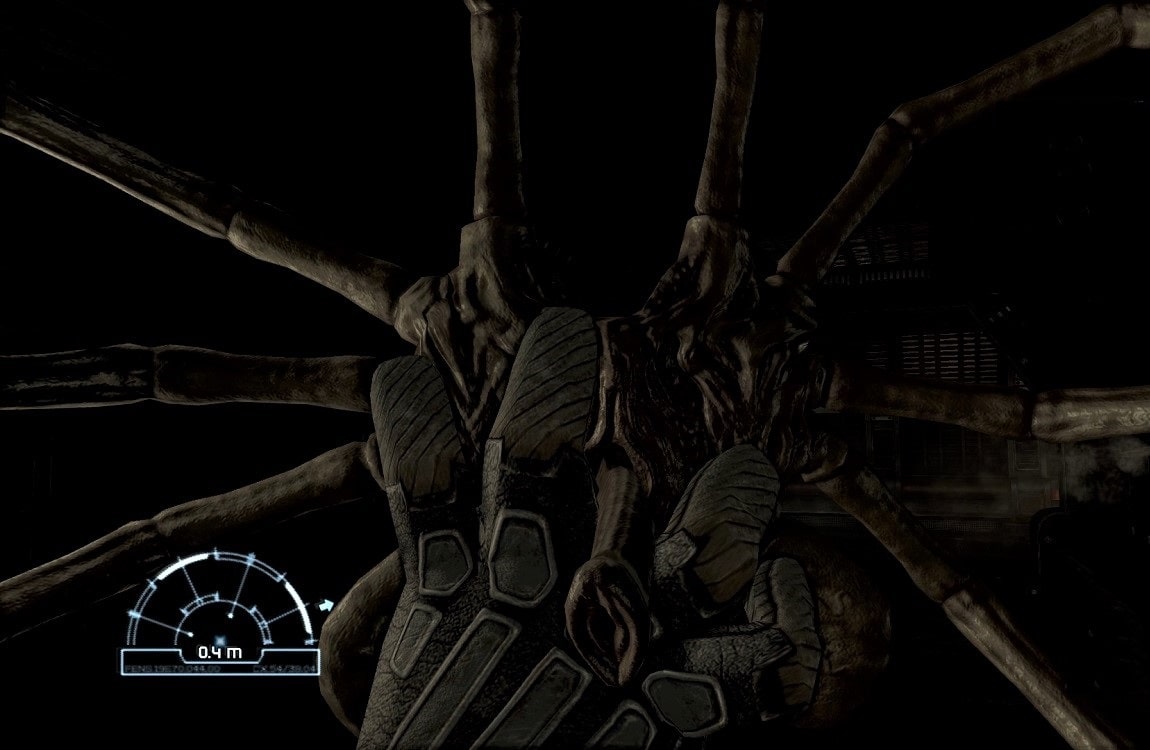 In the first two Aliens vs. Predator games on the PC, the facehugger embrace meant instant and scary death for the player. However, this changed in Aliens vs. Predator 2010, a game more friendly towards console gamers. When attacked by a facehugger, the player could quickly tap a key and push the facehugger off with the hand. This was exactly the same in Aliens: Colonial Marines, a game seriously lacking in scares. However, Alien: Isolation went back to the horrific franchise roots and had an instant death when being hugged.

Want to know more about the Alien variants? Check out the list about the different Xenomorph types and the android Xenomorphs.