Like regular Xenomorphs, the facehuggers come in different shapes and sizes. They all have the purpose of infecting a host with an embryo, which can depend on the type of the facehugger. A Facehugger could theoretically even impregnate a Xenomorph, if the need arises. Although the creatures are the beginning of the Alien life-cycle, they can also serve as an attacking force, as they can be even more expandable as regular warriors. The list includes the Queen facehugger, giant facehugger, and the white hybrid facehuggers. 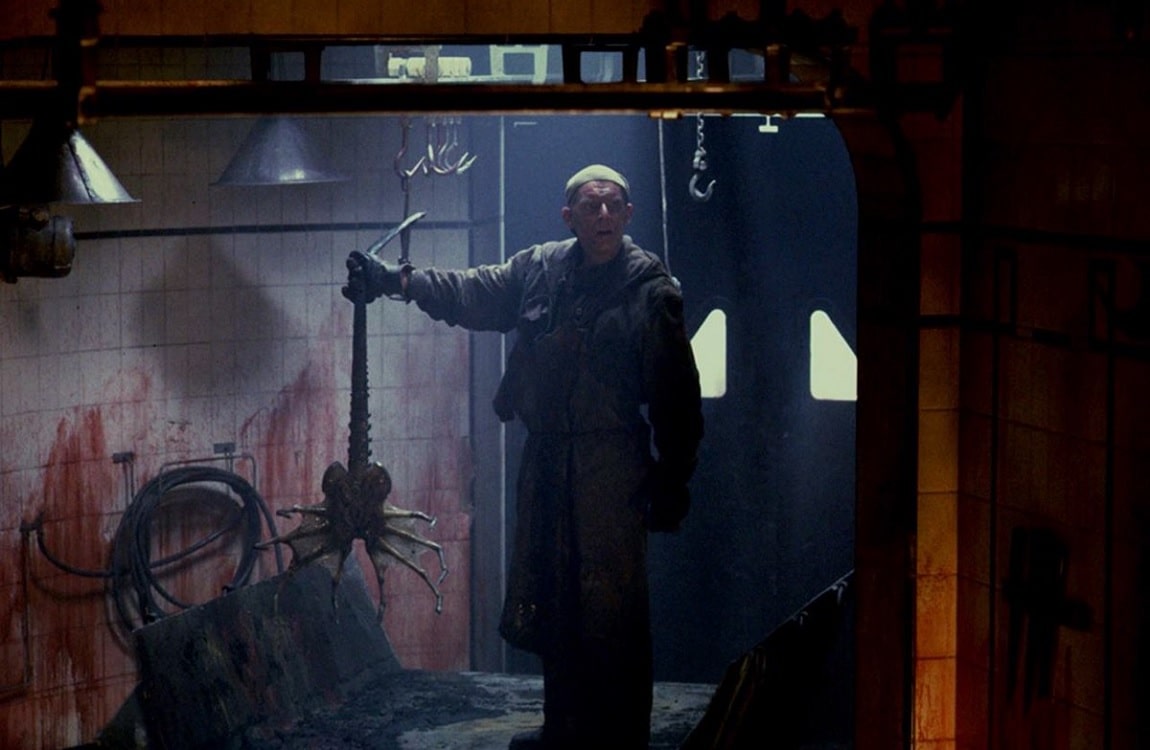 The regular facehugger is the most common facehugger type, and appears in almost all entries of the franchise, including movies, comics, and games. It emerges from an egg, either by leaping rapidly or crawling slowly, attaches itself to the face of the host, and wraps the tail around the throat. Having acid for blood, it is very difficult to remove. However, there have been some special cases of facehugger removal in the lore that ended successfully. After successfully inserting the embryo, it comes off and dies, seemingly harmlessly. In the expanded universe, the facehuggers have sometimes attacked en masse, with hundreds of them attacking at once. This is a good tactic in the case of an Alien hive having not many Xenomorphs warriors, but lots of eggs.

The royal facehugger is slightly bigger than the regular one and carries the Alien Queen embryo. In addition, there is some evidence that it carries a warrior Alien embryo, serving as a protector for the slowly growing Queen. The creature has webbing around its legs, possibly making it a more adept swimmer. The royal facehugger only appeared in the Alien 3: Special Edition and was discovered dead by prisoner Murphy in the abattoir. Carrying multiple embryos would explain the plot hole of Alien 3 only having one egg and one facehugger, but both the runner Alien and the Queen that grew inside Ripley. 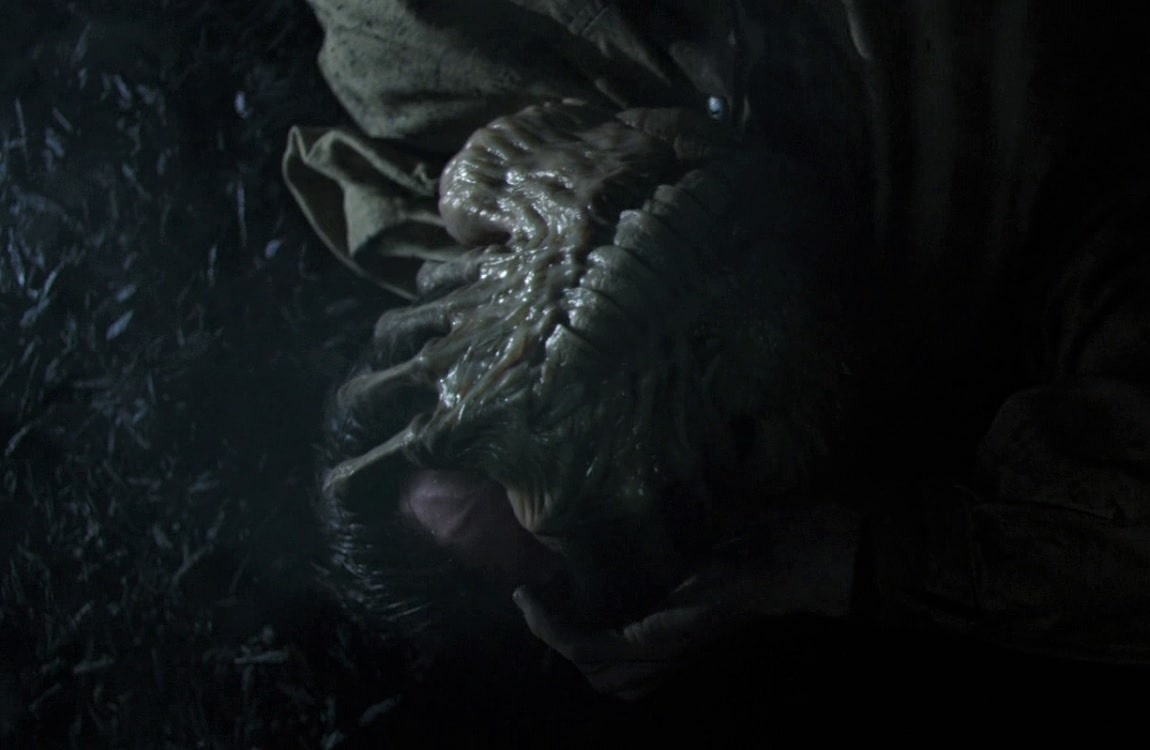 The Protomorph facehugger eggs from Alien: Covenant were created by David based on the original designs of the Engineers. While the eggs looked different from the traditional eggs (having 2 petals instead of 4), the facehugger's appearance was mostly the same. However, they had an accelerated life cycle, being able to inject an embryo in a matter of seconds, as it happened with Sergeant Dan Lopé from the USCSS Covenant. The Protomorph facehugger was very agile, but perhaps a bit more vulnerable, as it came off after being stabbed with a knife. Furthermore, the resulting Protomorph emerged relatively fast, both in the case of Captain Oram and Dan Lopé. 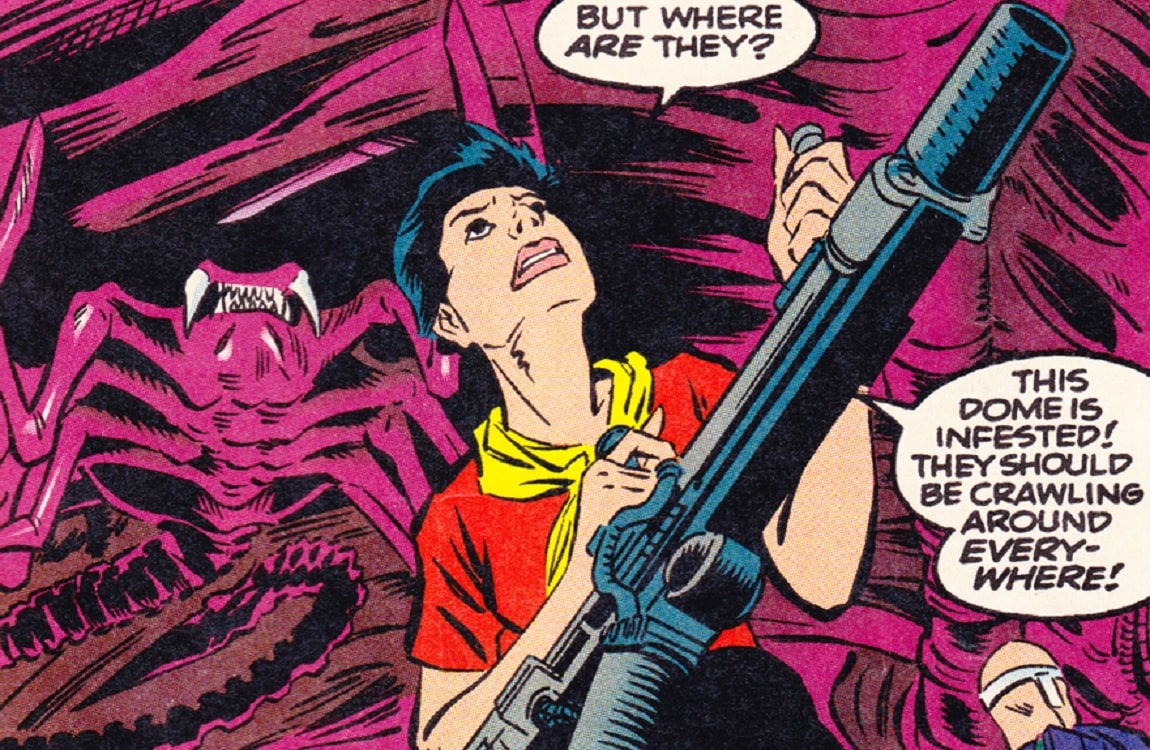 The giant facehugger was a toy released by Kenner as part of their Aliens product line. Accompanying the toy, was a mini-comic titled Aliens Space Marines: Terrordome. In the comic, most of the Colonial Marines had miraculously survived the movie and formed into a group of Alien hunters. Lead my Ripley, they traveled into an Alien hive, where giant facehuggers stalked on the ceiling. The giant facehuggers had red skin, fangs, and spikes on their legs. They didn't infect any hosts themselves, but rather incapacitated them and held down until a regular facehugger was ready to attach. NECA later released a reimagining of the creature, named the Queen facehugger. 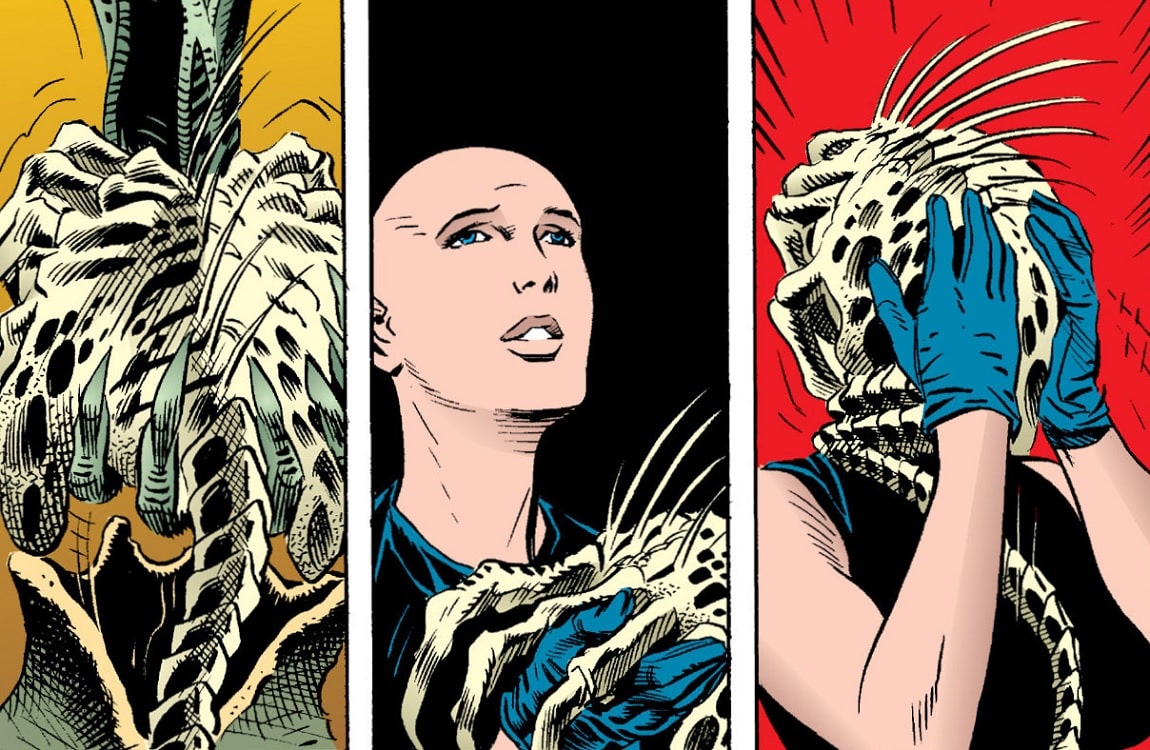 The white hybrids and their facehuggers appeared in the exotic Aliens vs. Predator: Deadliest of the Species comic series and were the creation of a Toy, a rogue AI serving one of the big mega-corporations alongside Weyland-Yutani. These white facehuggers had spikes on their backs, a form of extra protection lacking on the other types. However, the facehuggers seemed somewhat docile in the few cases where they were seen, being mostly offered from a hand and being non-aggressive. The resulting Xenomorphs had a mixture of human, Predator, and Xenomorph traits, some of them even being able to speak. The white hybrids were wiped out by Ash Parnall and her Predator ally - Big Mama. 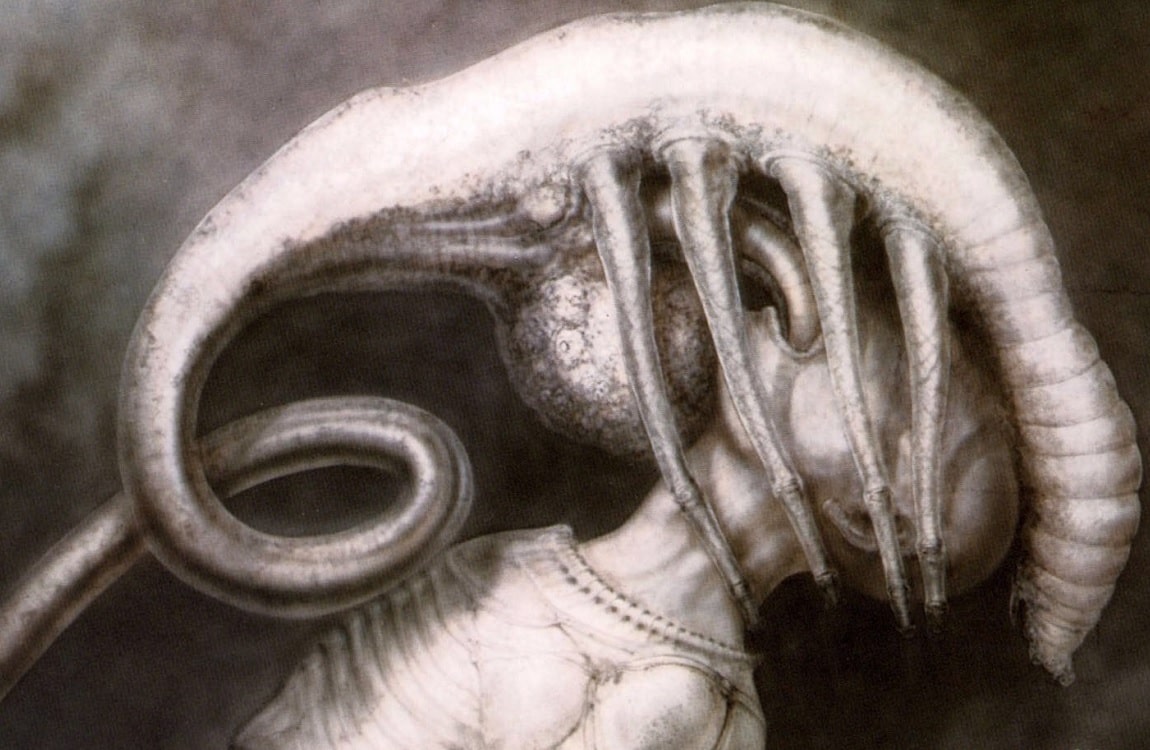 Like with the chestburster, Giger's original design for the facehugger was rather different from what we saw in the movie. The creature was much larger and longer, however, it did not cover the victim's face entirely. The phallic tongue that was shoved down the throat was also visible. A facehugger in this position would have been surely easier to remove, it did not even have its tail around the victim's throat. It is also worth mentioning that the victim in this picture does not seem entirely human, but more like an Engineer as seen years later in Prometheus. 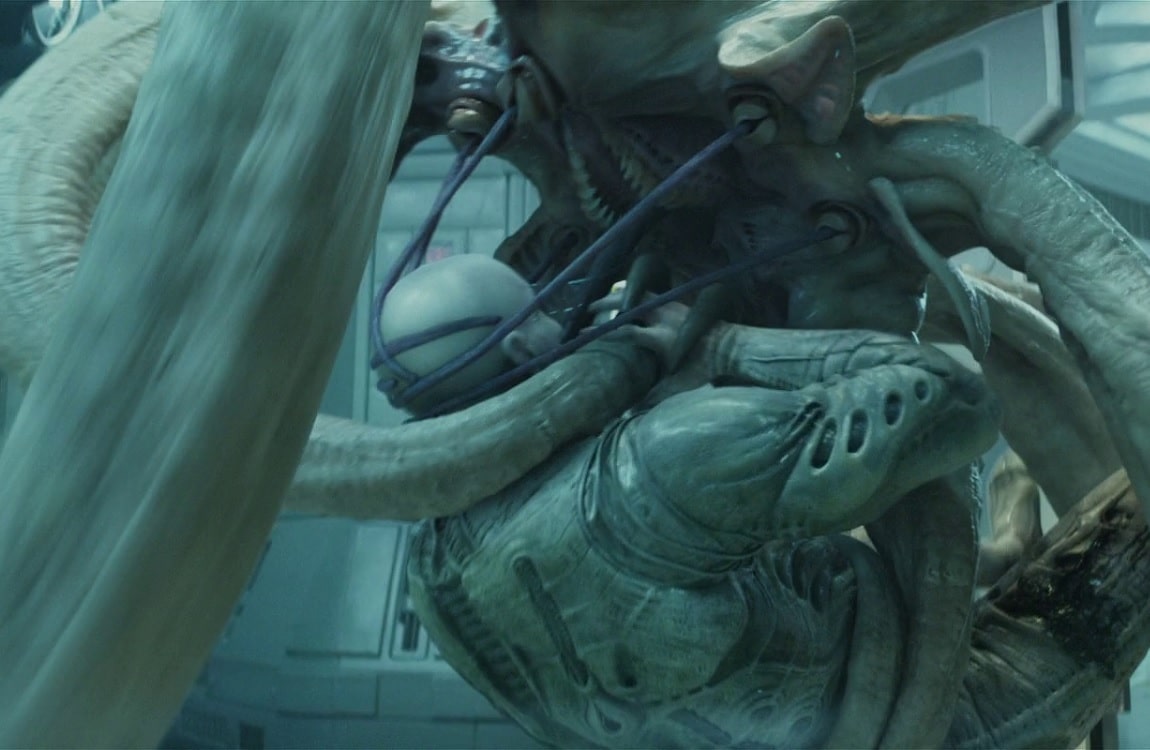 The massive trilobite creature from the end of Prometheus wasn't a classical facehugger, but can be considered its ancestor or close relative. Dr. Elizabeth Shaw managed to extract the creature from her stomach with the auto-doc, after being infected by having sex with Dr. Holloway, who in turn was infected with the black goo. It can be said that the trilobite had a reverse lifecycle, being born in a similar way as a chestburster. However, it did carry an embryo, which it successfully inserted into an Engineer by not only hugging his face but covering his whole body. The result was the birth of the Deacon, another close relative of the Xenomorph. 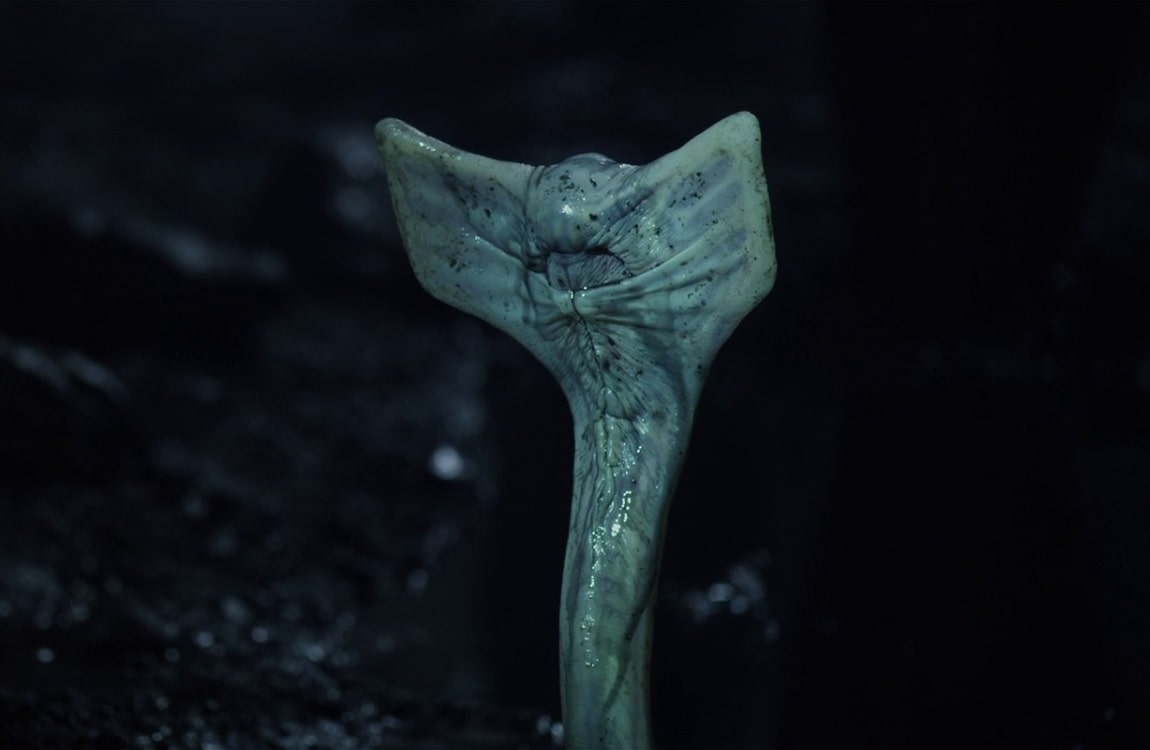 The hammerpede creature was another prototype facehugger from Prometheus. It had a smaller body with white skin and was able to stand on its muscular tail. The hammerpede probably formed when small worms carried by the feet of the Prometheus crew came into contact with the black goo, transforming them rapidly. The supposed scientist named Millburn found this space snake to be cute and tried to cuddle with it. However, it wrapped itself around his arm, slipped into his suit and forced itself down his throat. Like the regular facehugger, it had acid for blood, which was evident when Fifield tried to cut the creature but got a face full of acid, falling into the black goo himself. There is no evidence of the hammerpede carrying any embryo, as Millburn was just killed. 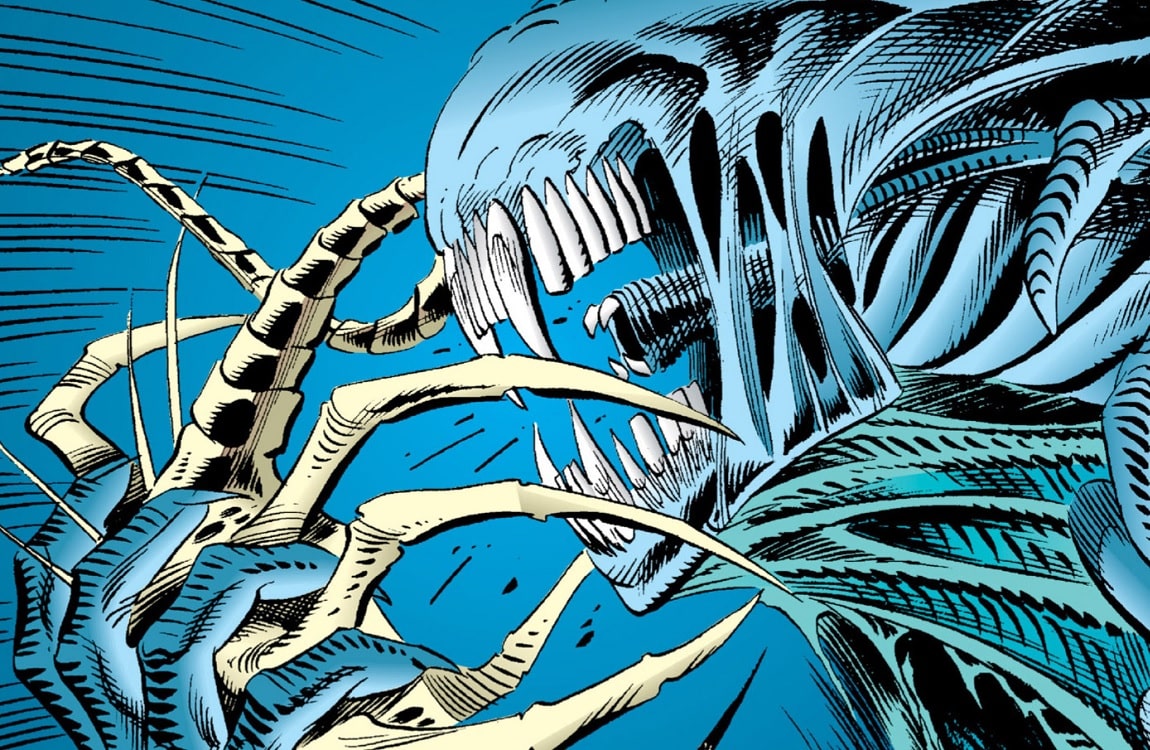 A facehugger impregnating a Xenomorph is possible but very rare and has happened at least once in the Alien expanded universe. No special type of facehugger is required for this, although it is an inefficient way to produce more Xenomorphs, as two eggs are required in the end. Facehuggers are not attracted to Xenomorphs, and could only be commanded to do the act by the Queen when a special need arises. One such need could be the requirement for a new Queen when the old one is sick or a new hive location is discovered but there are no hosts yet. The Samara Station Queen from Aliens vs. Predator: Deadliest of the Species was impregnated by a Facehugger. The Queen used the birth of the chestburster to kill the Hybrid King Alien, holding him against her chest while it punched through.

Want to know more about the Alien expanded lore? Check out the list of the times that the chestburster was successfully removed and take a look at the biggest Xenomorphs.