The M41A Pulse Rifle is probably the most iconic human weapon in the Alien vs. Predator series. Used by the Colonial Marines across the universe, it gives adequate protection against the Xenomorph and Yautja threats. Here is an overview of some of the Pulse Rifle variants that have been used in the movies, games and books. 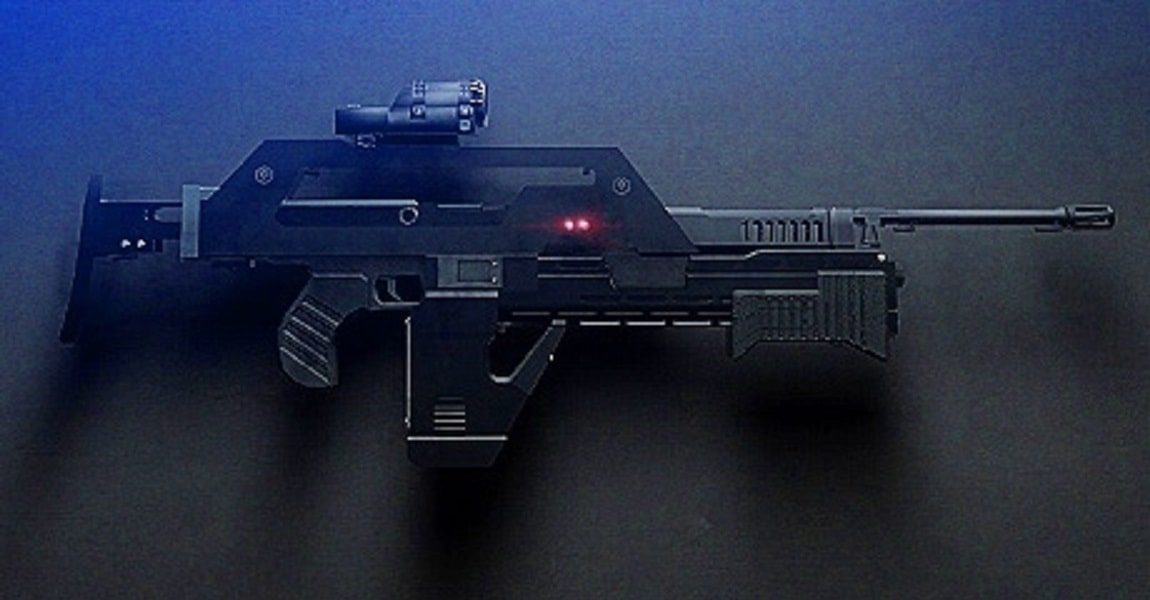 The Weyland Storm Rifle was a technologically advanced rifle manufactured by Weyland Corp in the 21st century and used heavily by off-world security forces. Introduced on September 10, 2024, the Storm Rifle is notable for being the first rifle able to track targets from over 500 kilometers away. Although not directly a variant of the Pulse Rifle, it is a precursor to the M41A Pulse Rifle used by the United States Colonial Marine Corps in the 22nd century. The weapon had a lot of electronic parts and had reliability problems. This information and image were released as promotional material for Prometheus. 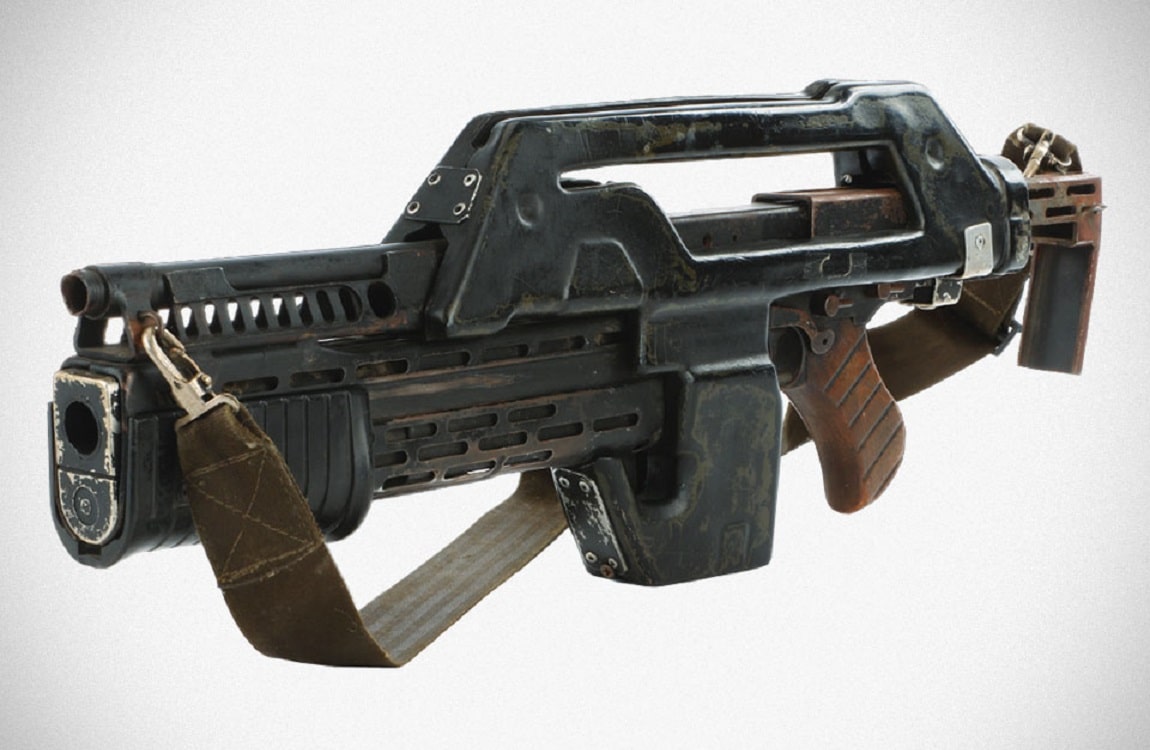 Developed by retired Colonial Marine Jonathan LaForce, the M41 was another predecessor of the M41A. Although he lived a quiet life serving a BBQ cart, LaForce was able to put together one of the best weapons ever made. Being much more versatile and robust than the Weyland Storm Rifle, the M41 gained a lot of popularity by marines and went into production by Armat. The M41 was taken into service by the Colonial Marine Corps in the year 2171. The weapon was soon upgraded to the M41A which solved some problems with the weapon jamming and overheating. The M41 prototype was referenced in the Aliens: Bug Hunt anthology book story "Episode 22", released in 2017. 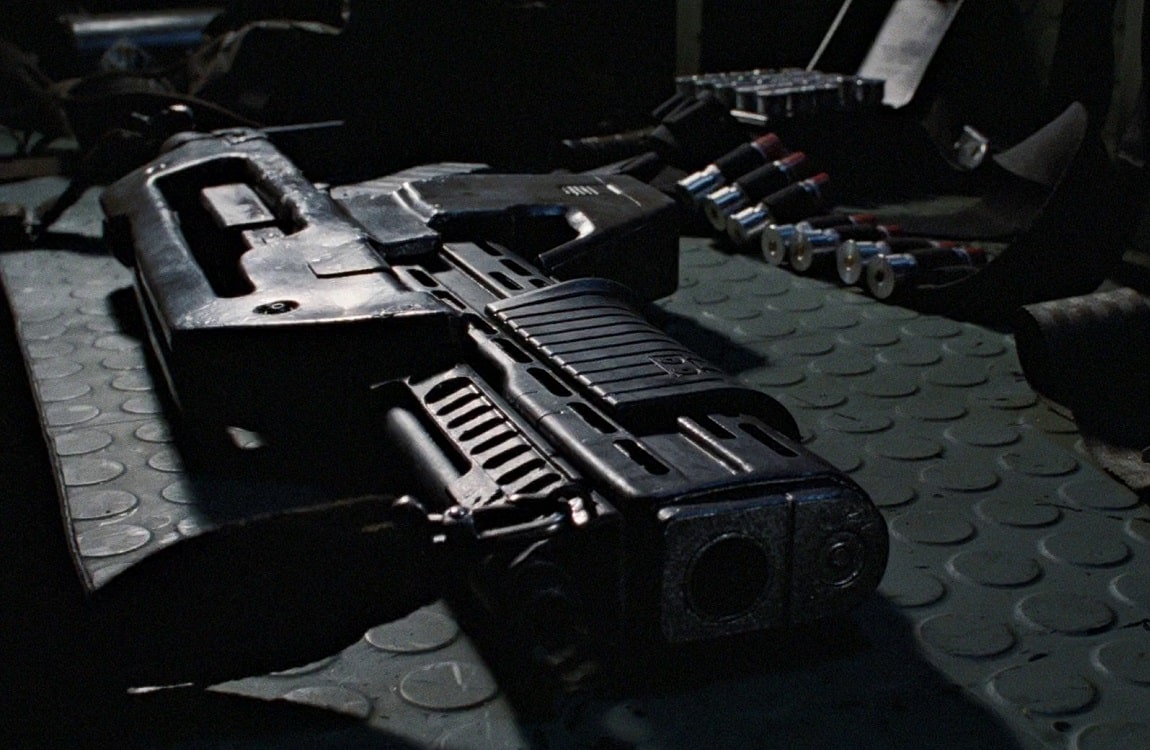 The M41A is the most well-known and widely used Pulse Rifle, appearing heavily in Aliens and at the end of Alien 3, in use by the Weyland-Yutani commandos (a black variant). Aliens vs. Predator Classic was one of the few games that did not introduce a new Pulse Rifle variant and relied on the trusty M41A. Following continuity with the Tech Manual, it sometimes jammed in combat and had to be reloaded. Although the magazine held 99 bullets, it was often loaded with 95 to avoid jamming altogether. When running out of ammo, it could be swung like a club, even against the Alien Queen at the end of the marine campaign. 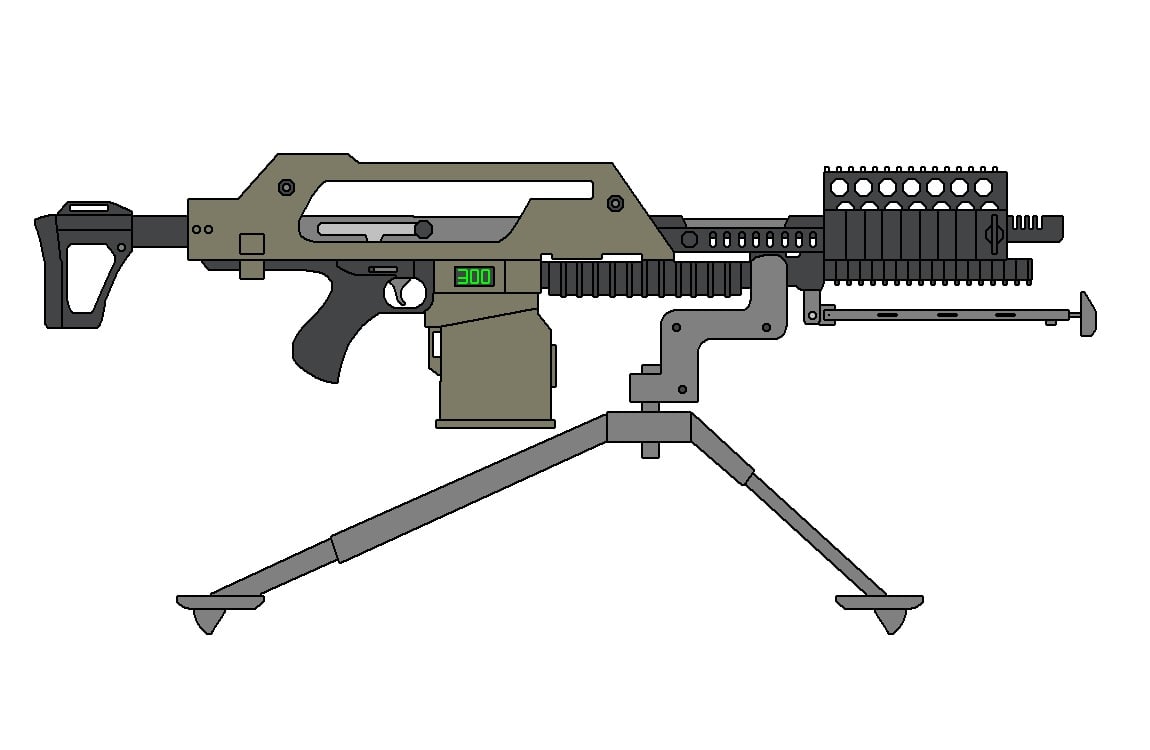 Used mostly with recon platoons, the M41AE2 is essentially a standard M41A with the grenade launcher removed and replaced with an 8cm longer, removable barrel, an elongated barrel shroud and a folding bipod. The M41AE2 is intended to function as a light support weapon, providing greater rates of sustain fire at longer ranges, feeding on an 'L' bend 300-round ammunition clip. It also has limited anti-air capability. The only references to the M41AE2 Pulse Rifle are from the Colonial Marines Tech Manual, released in 1995. 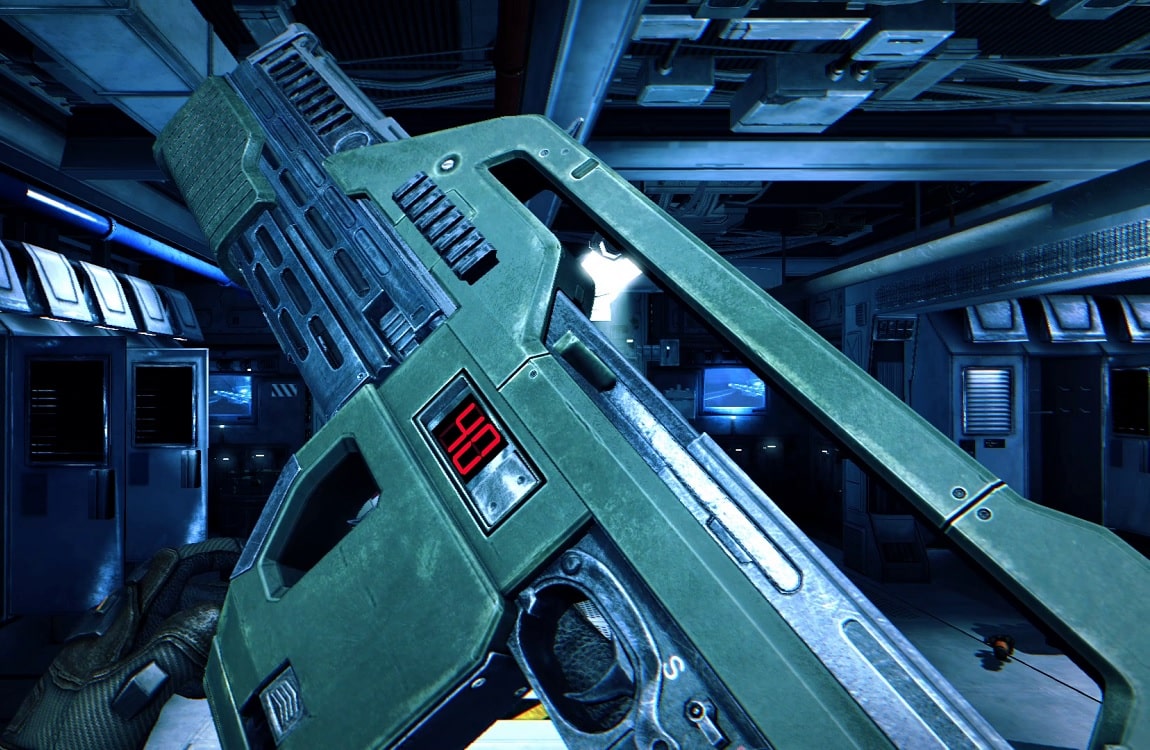 The Armat M41A Pulse Rifle MK2 is an American-made pulse-action assault rifle chambered for 10×24mm Caseless ammunition. It is the successor to the venerable M41A Pulse Rifle, and was employed by the United States Colonial Marine Corps as their standard-issue infantry weapon during the late 22nd century. The Colonial Marines of the USS Sephora were notably armed with M41A MK2s. It was also used by Weyland-Yutani security forces. It is customizable with attachments like a sound suppressor, reflex sights, laser targeting and extended magazine. This was included in the Aliens: Colonial Marines video game released in 2013. 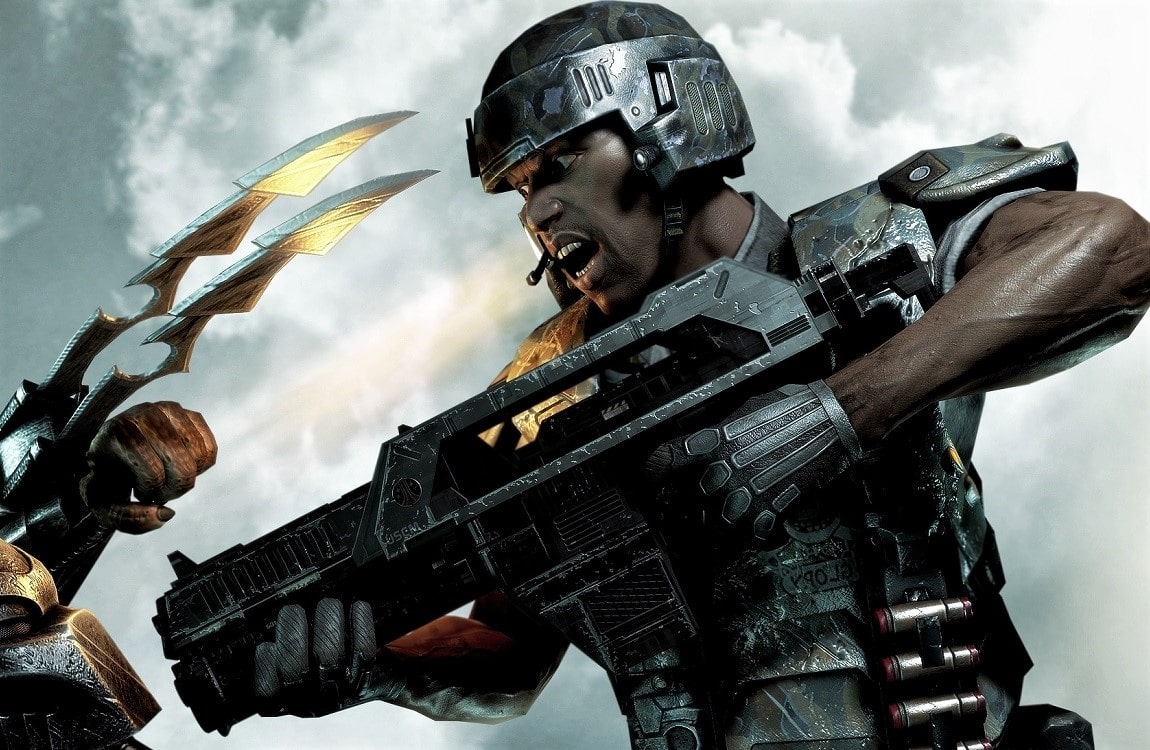 The Armat M41A/2 Pulse Rifle is an American-made pulse-action assault rifle used primarily by the United States Colonial Marine Corps. Part of the M41 series of Pulse Rifles, it was designed as a replacement for the aging M41A Pulse Rifle and M41A Pulse Rifle MK2, incorporating several improvements over the earlier designs. The M41A/2 notably saw widespread use during the Freya's Prospect Xenomorph infestation on BG-386. The handle is lower than the other variants, the weapon is considerably darker and there is a small Colonial Marines logo on the handle. This weapon was included in the Aliens vs. Predator 2010 video game. 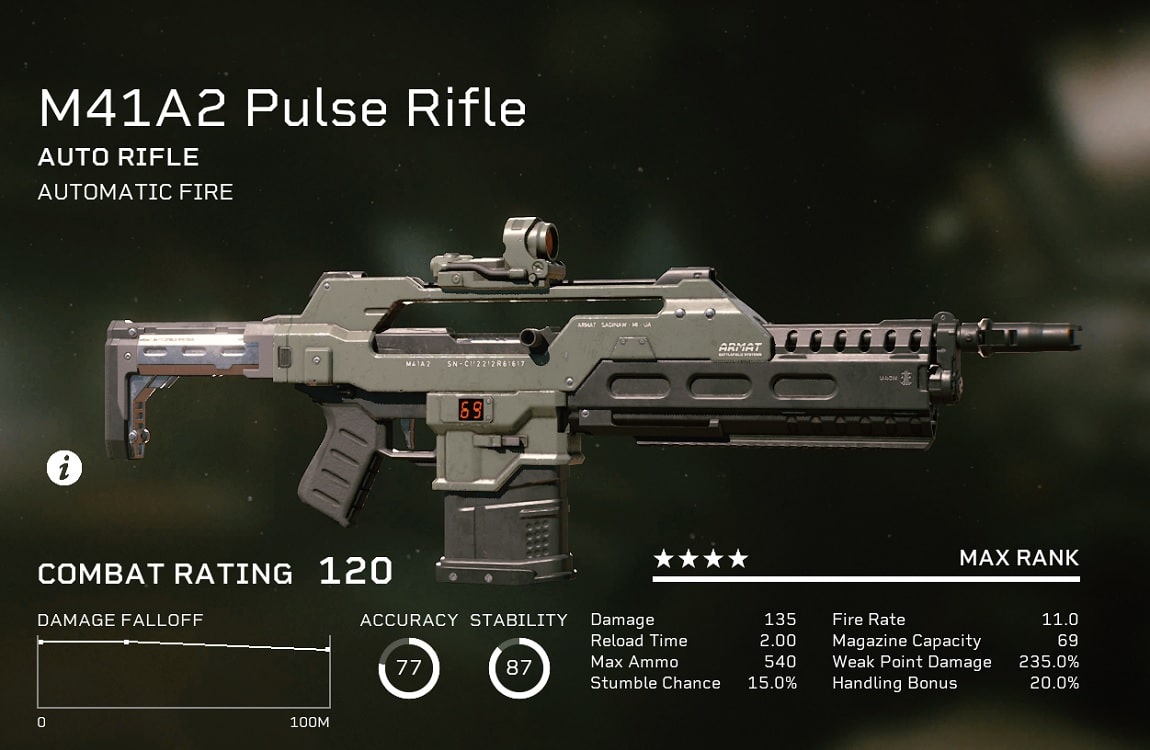 The M41A2 was introduced in Aliens: Fireteam Elite and is not to be confused with M41A/2 (appearing in Aliens vs. Predator 2010). The M41A2 came into use a few decades after the events of Aliens and was heavily customizable. However, it was lacking the grenade launcher underneath the barrel but it is possible it will be released as a future DLC. Furthermore, the standard M41A2 Pulse Rifle only came with a smaller magazine - 69 compared to the 99 of the M41A9. The Colonial Marines of the UAS Endeavor used the rifle while taking down the Katanga refinery. 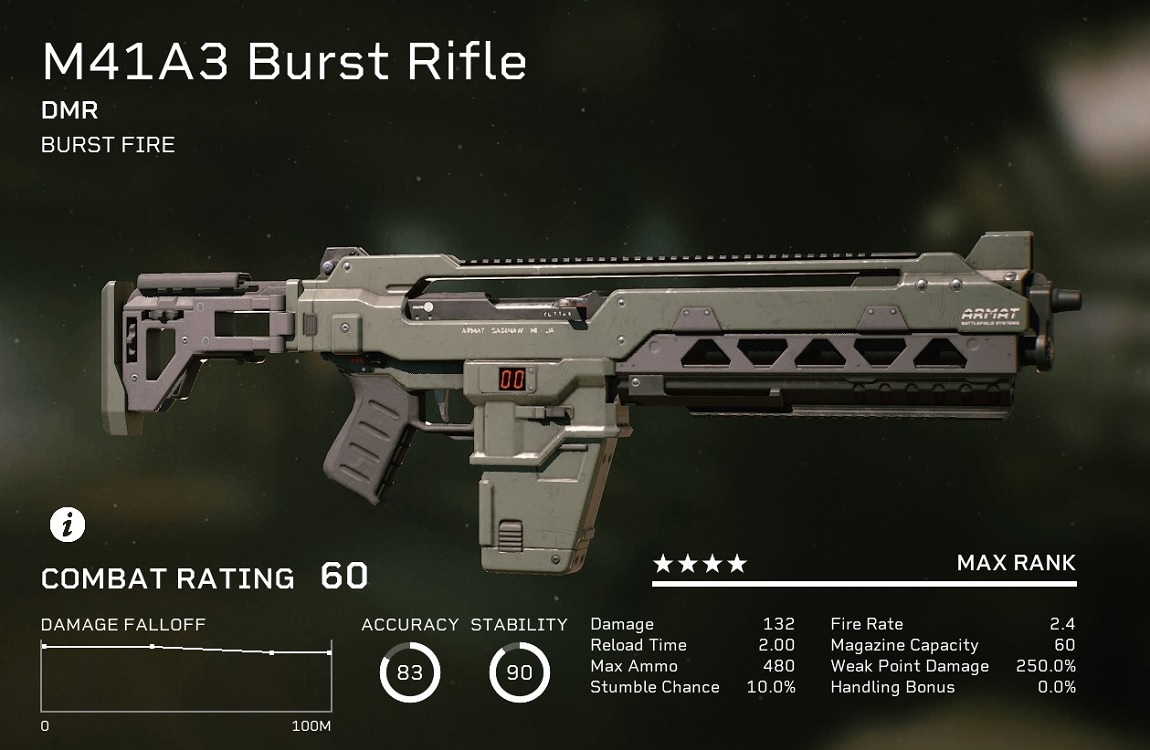 Aliens: Fireteam Elite established another M41 variant into the Alien lore - the M41A3 Burst Rifle. The weapon came into service in 2186 (about 7 years after the events of Aliens) and only fired in bursts of 4-rounds. The purpose of this variant was to conserve ammo, as the M41 in full auto mode depleted the 99 round magazine quickly, especially when the user panicked. Inspiration for the rifle was found in the guns of the Three World Empire, many using burst modes. In practice, the M41A3 Burst Rifle proved less useful than hoped. It did conserve ammo, but with the loss of accuracy. Furthermore, it was missing the grenade launcher like its M41A2 counterpart. 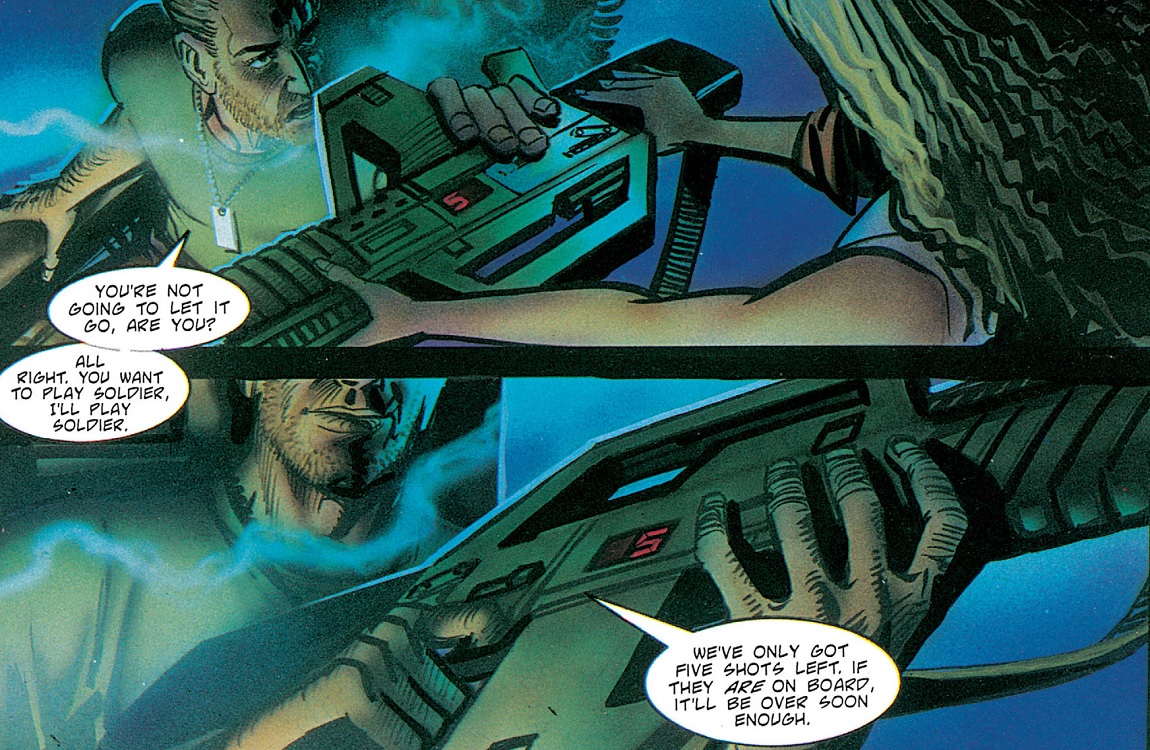 The epic Alien/Earth War trilogy of books and comics introduced another Pulse Rifle variant - the M41E. The weapon had an effective range of about 500 meters, although the underslung grenade launcher was limited to 100 meters. It was a lighter and more compact version of the M41A, allowing various types of rounds to be used against different opponents. David Wilks (an alternate version of Dwayne Hicks) famously used the weapon against a lone Xenomorph on the Benedict when escaping Earth at the start of the Nightmare Asylum comic. He only had 5 rounds left in the weapon, but 1 round was enough to penetrate the neck and ribcage of the creature. 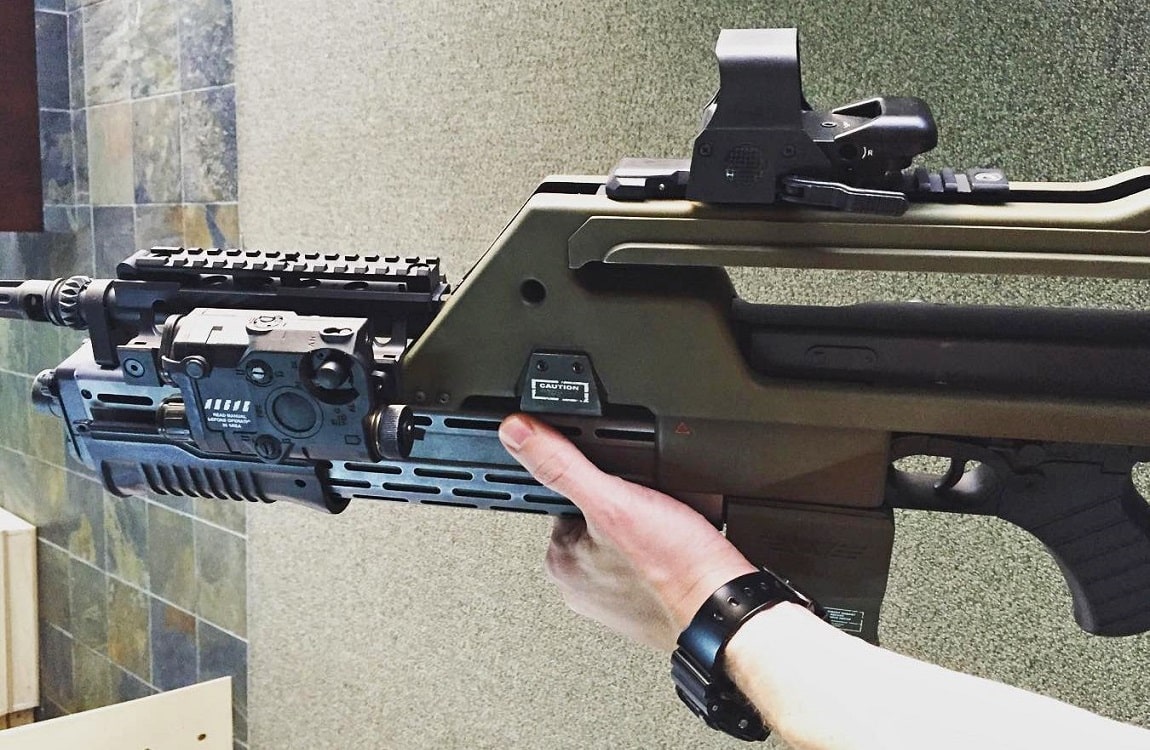 Released as an image by Neill Blomkamp for his planned Alien 5. The movie was going to be set about 30 years after Aliens, so about the year 2210. Unfortunately, the movie was canceled due to Ridley Scott making Alien: Covenant instead. We see from the image that this Pulse Rifle has adapted the RIS system of attachments (similar to Aliens: Colonial Marines M41A Pulse Rifle MK2). Tom Woodruff Jr. also posed with the rifle as a stand-in for Michael Biehn (he was going to return as Hicks). 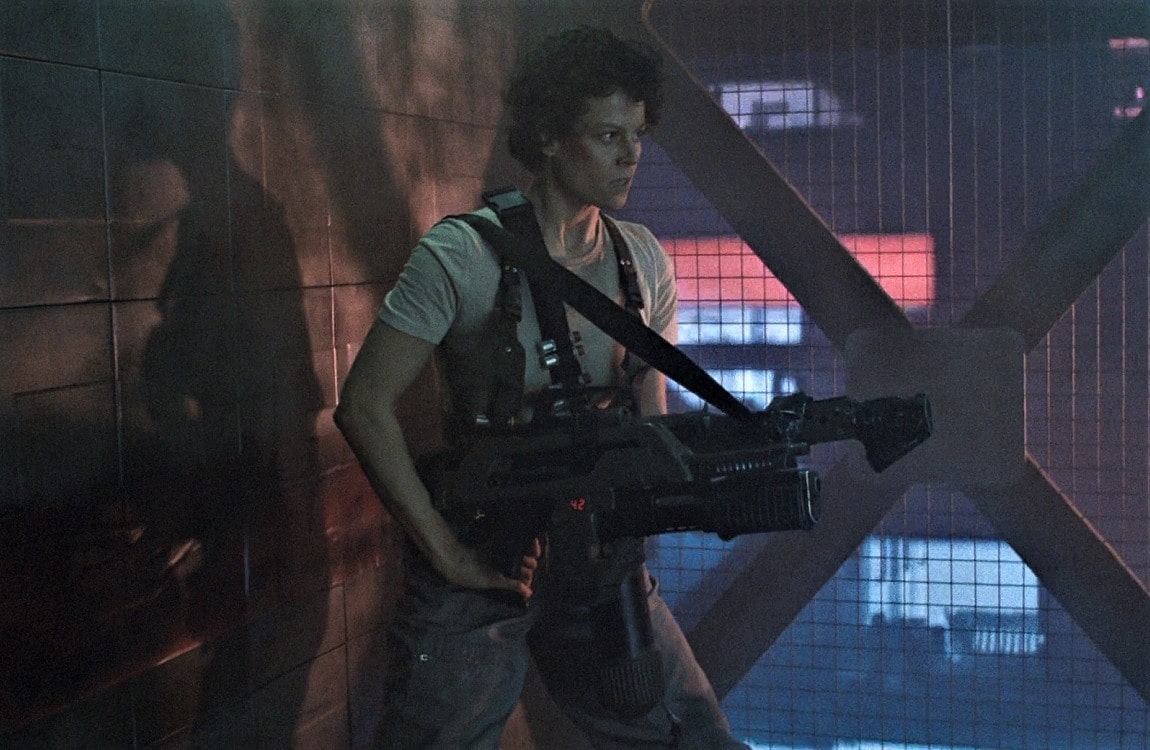 Ellen Ripley famously created a custom variant of the M41A Pulse Rifle just before descending into the LV-426 Atmosphere processor hive. She strapped the M41A together with the M240 Incinerator unit using duct tape. The weight of the two guns must have been considerable, but the adrenaline and the gun sling helped to hold it. This combination of two weapons proved to be effective, as Ripley accurately shot several Xenomorphs and torched dozens of eggs at the same time. Ripley did not bring any spare magazines or flame tanks, so the double weapon ran out and had to be left behind at the edge of the hive while retreating. 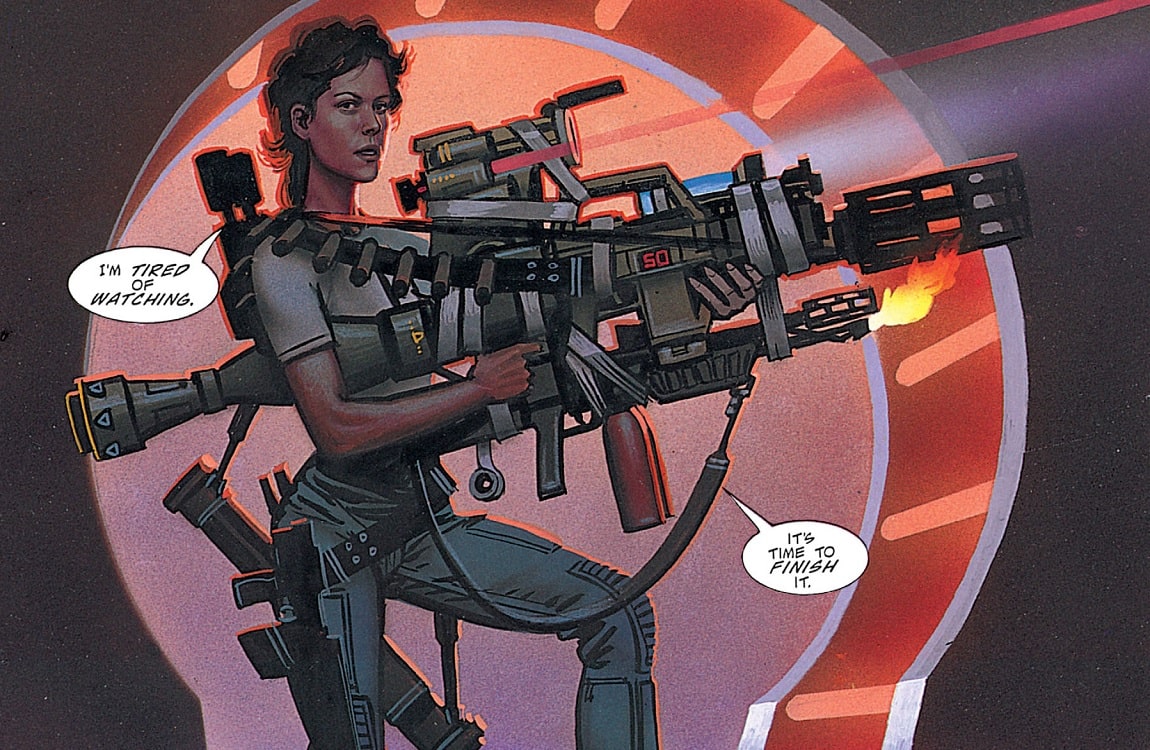 Using her prior experience, Ellen Ripley built an even bigger concoction of weapons at the end of the Aliens: Nightmare Asylum comic. This time, the Pulse Rifle was not only combined with a flamethrower but an RPG rocket launcher was attached as well. Although the comic was hailed for its realism and being true to Aliens, this part at the very end felt too over the top. The weapon itself would not be effective as it tries to do too many things at once and would just be too heavy. However, in the reprinted version of the comic, Ripley was revealed to be an android, which would explain able to hold all that weight. Ripley planned to use the weapon on a mission to Xenomorph Prime but opted to use a regular Pulse Rifle instead. 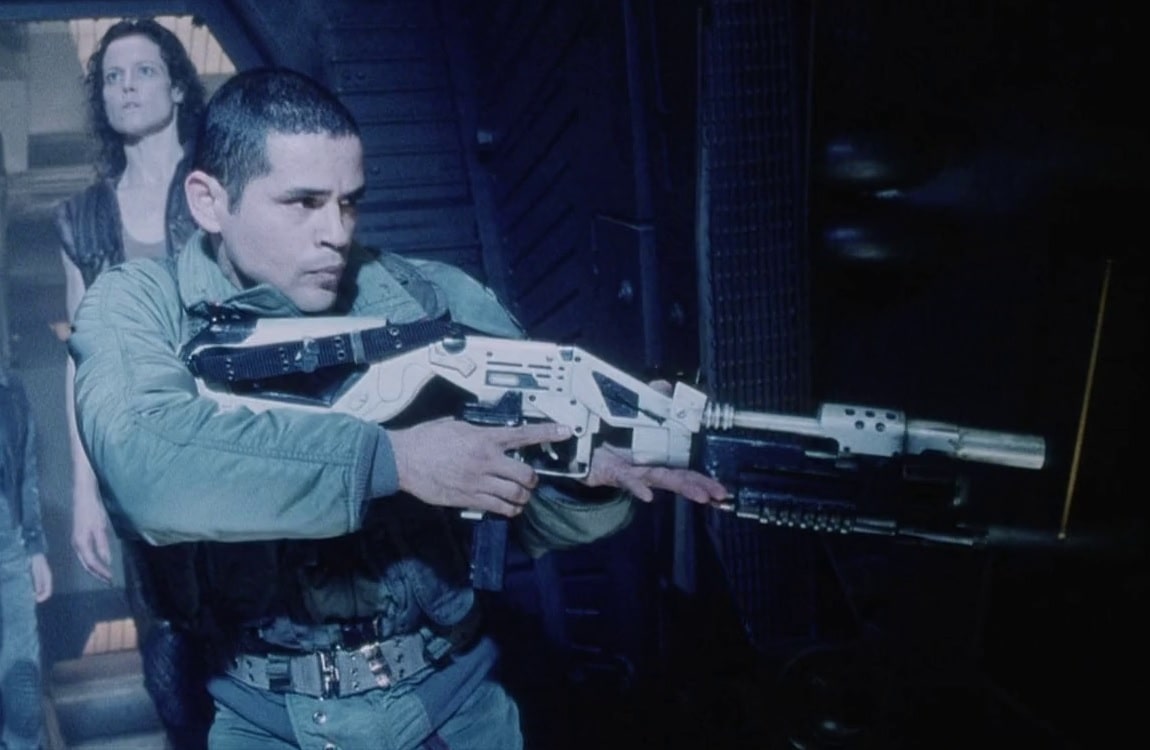 The Lacrima 99 is a descendant of the Pulse Rifle and was widely used 200 years after the development of the M41A Pulse Rifle. Although a slightly different weapon and not developed by Armat, it is still nicknamed the "Pulse Rifle" by the soldiers using it. The Lacrima 99 is mainly used by the United Systems Military, although it is also popular by mercenaries. It has a similar mechanism as the M41A Pulse Rifle, with electronic pulse action. The weapon does not work underwater, although it is known to work when wet. It comes with an attachment lamp underneath. The Lacrima 99 shows up in Alien: Resurrection and the video game based on the movie.