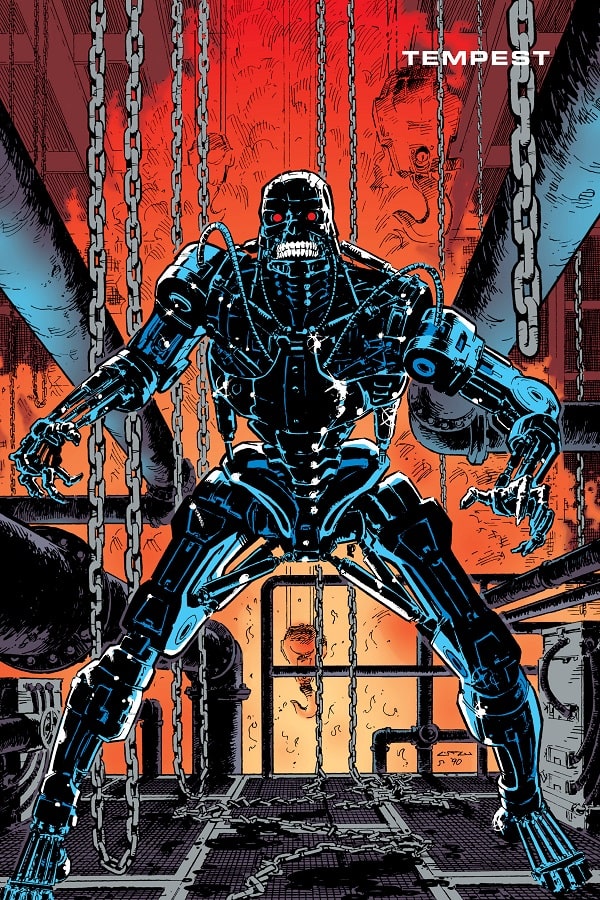 Terminator: Tempest was a comic released before Terminator 2 and builds on the first Terminator in interesting ways. A new group of Terminators is sent back in time and a squad of resistance soldiers follows them. Some elements of the story are very similar to Terminator 2 in the sense that Cyberdyne and its programmers are targeted to prevent the future war. Tempest has several sequels that continue the adventures of the increasingly diminishing number of surviving characters. And one of the Terminators grows horns.

9. Terminator 3: Before The Rise 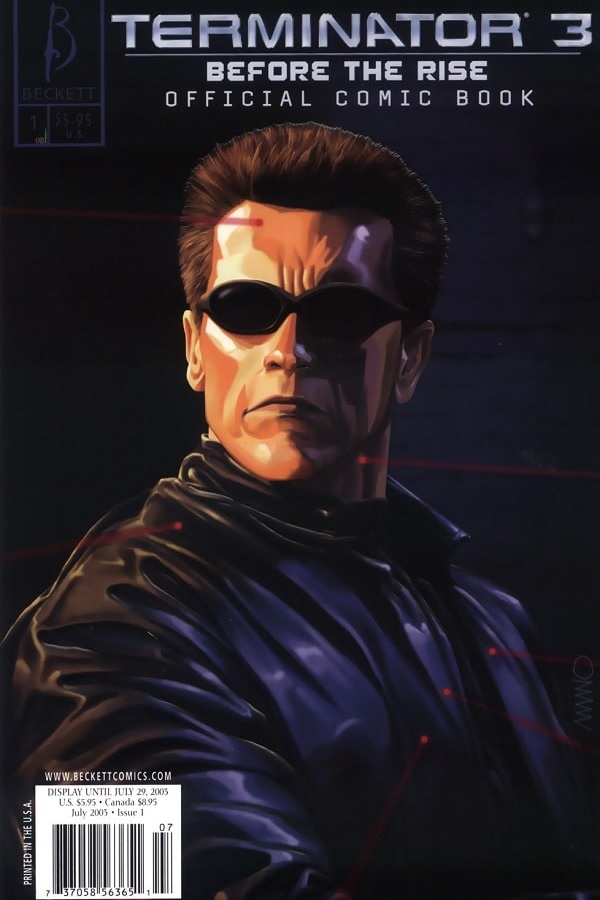 Terminator 3: Before The Rise is a cryptic story set before the events of the third movie and the first chapter in several series based on Terminator 3. The comic focuses on a group of resistance fighters capturing a T-850 Terminator and reprogramming him for the mission in the past. The story features several chapters inside the mind of the T-850 which was very unique. The series acquired the rights for Arnold's likeness so he features heavily in all the T3 comics.

8. Alien vs. Predator vs. The Terminator 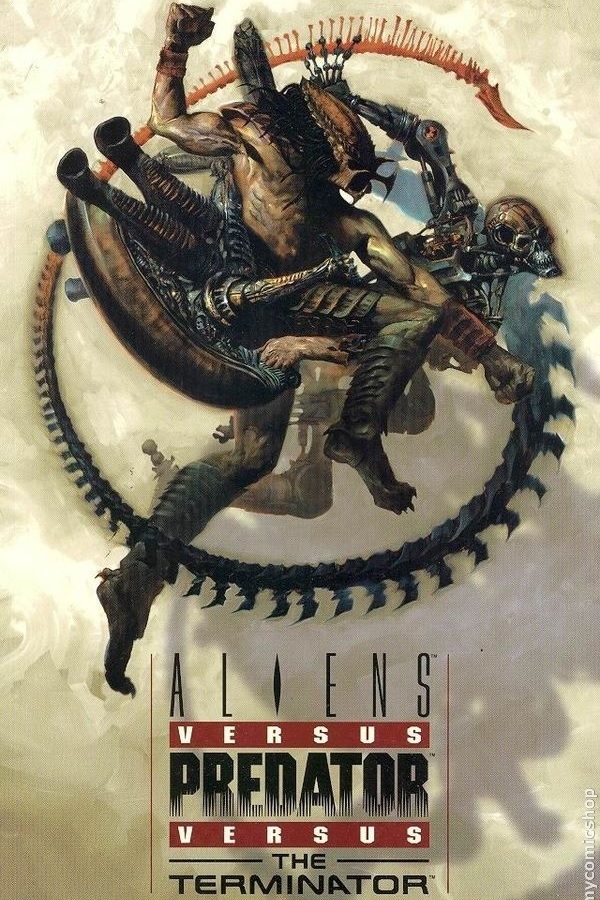 Alien vs. Predator vs. Terminator is a 4 part comic series that finally brought the 3 franchises together. While most of Terminator stories involve traveling to the past, this crazy series takes place centuries in the future. It even involves Ripley 8 and Call from Alien Resurrection, one of the few Expanded Universe stories to do so. There are insane things like a Terminator-Alien hybrid, supersoldiers and Crypto-Terminators. You have to read it to believe it. 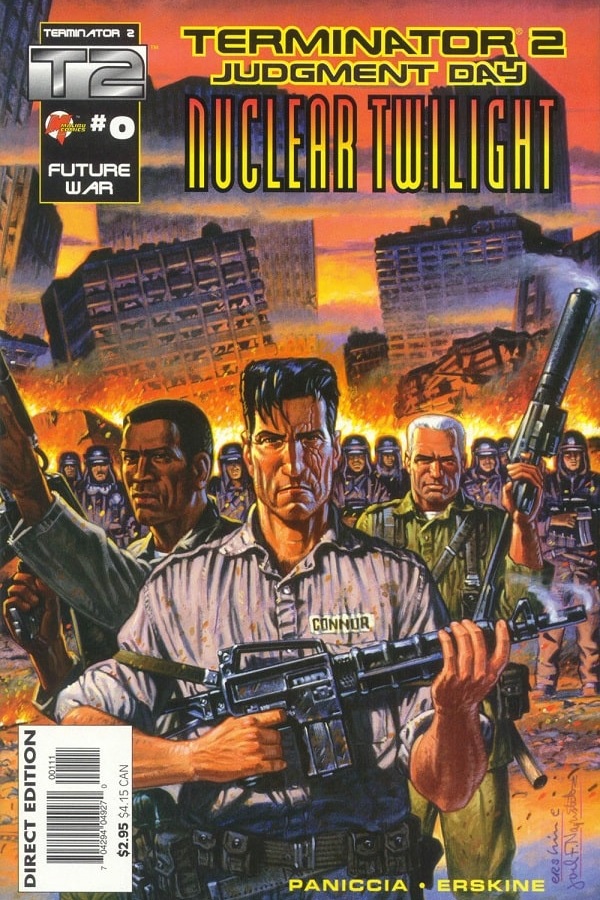 Another comic set during the Future War, Nuclear Twilight is a 5 part series depicting the events leading to John Connor sending Kyle Reese back in time to save Sarah Connor. Nuclear Twilight has a companion series called Cybernetic Dawn, which shows the events immediately after Terminator 2 and is also quite good. Both series were published by Malibu Comics who went defunct shortly after the Terminator comic series.

6. RoboCop vs. The Terminator 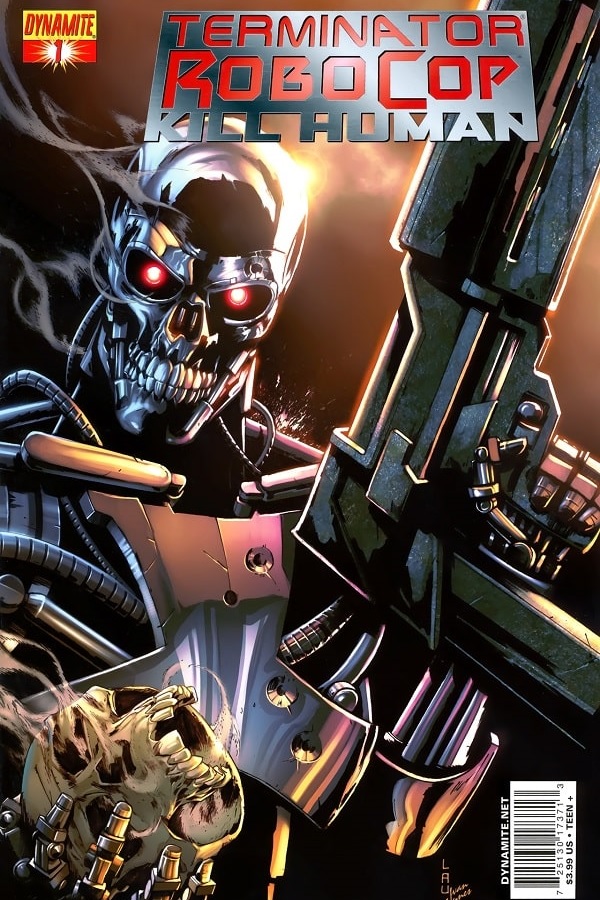 The RoboCop vs. Terminator project consisted of several video games released on different consoles and two separate comic series. The first was published in 1992 and was written by the legendary Frank Miller. In the comic, three Terminators are sent back in time to Detroit and battle RoboCop. The series received a sequel in 2011 and involves RoboCop traveling to the past to prevent the extinction of the human race. The Terminator and RoboCop make a good fighting pair and the series has some great action. 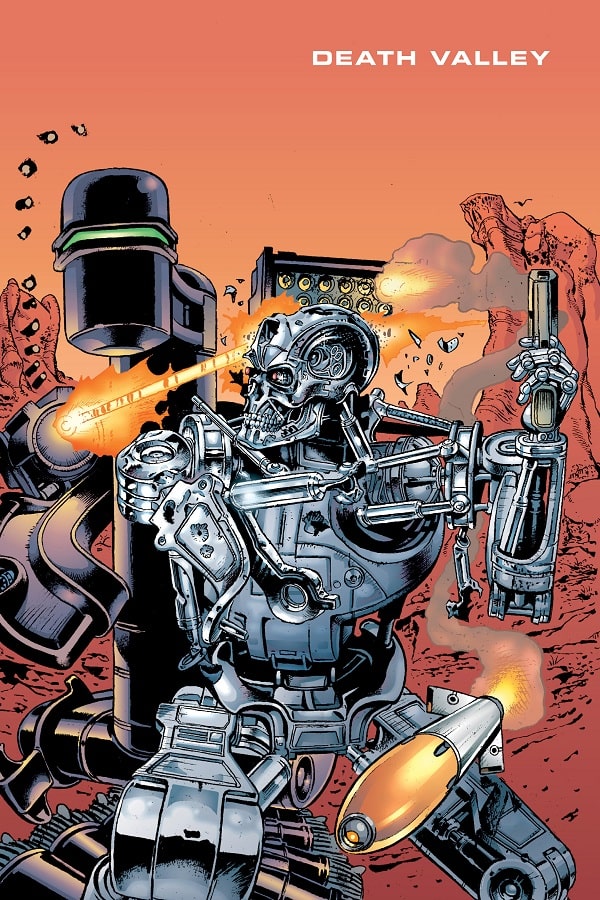 In Death Valley, a male and female Terminator are sent back in time to kill John Connor at the age of 5. So it is set between the events of Terminator and Terminator 2, a time period we don't know much about. A group of bikers, a family of false-Connors and a retired detective get caught in the fray that mostly takes place in the Nevada desert. The male Terminator starts contemplating his life and the purpose of killing. The action and artwork are great. 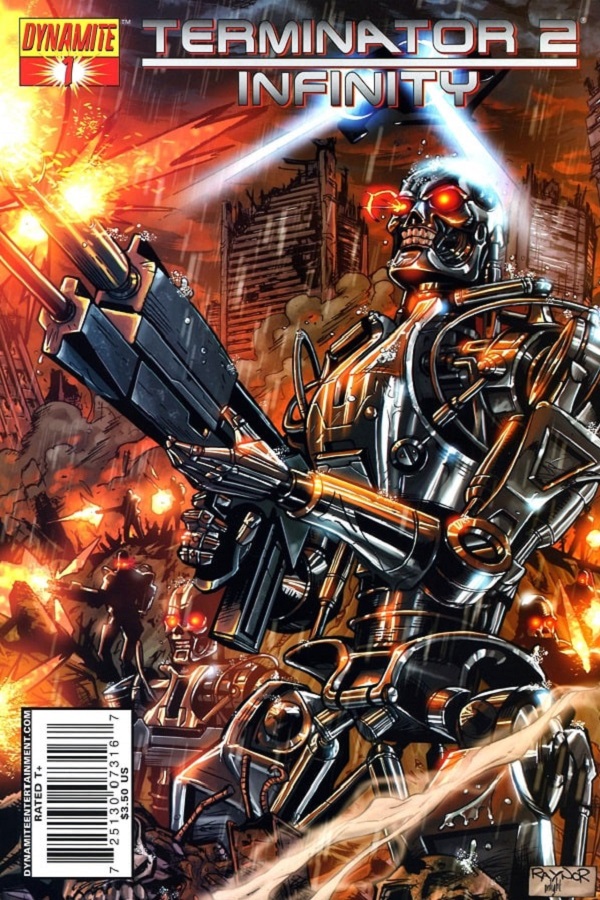 Terminator 2: Infinity, also known as just Terminator: Infinity is part of the Terminator 3 continuity that set Judgment Day in 2004. It follows John Connor and Kate Brewster leaving Crystal Peak and taking steps to form a resistance to the machines. They even meet a man named Uncle Bob. The comic has really great artwork and in heavy on the action side. The series later had two crossovers with Painkiller Jane as well.

3. The Terminator: One Shot 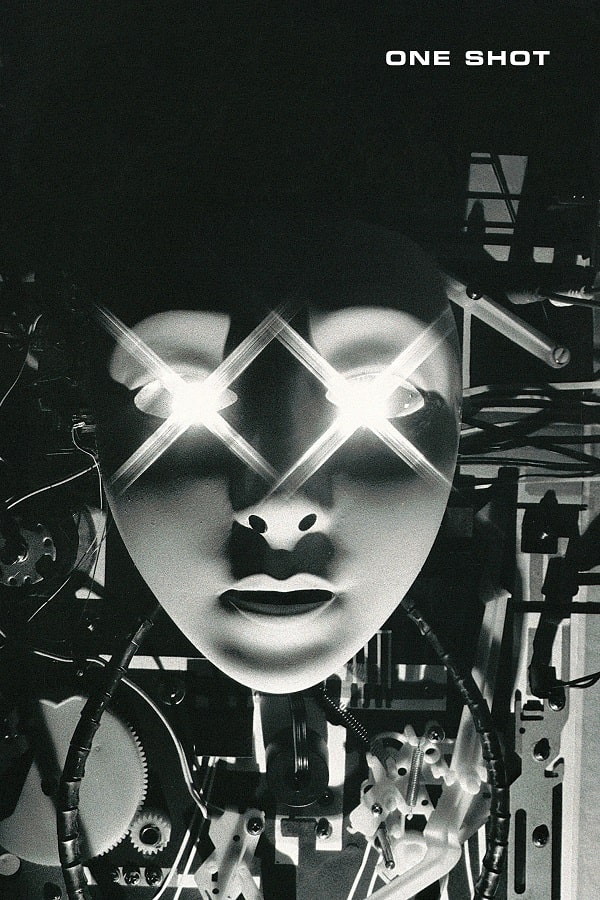 Terminator: One Shot tells the story of a fourth Sarah Connor and a female Terminator sent back in time to murder her. This Sarah Connor was located in San Francisco and stayed away from the events of the first movie. However, she was not an innocent victim, but an amoral woman who planned to kill her husband. The artwork is of the most unique and stylish for a Terminator comic and the twists in the story make it a great read. The female Terminator became a trope later stories but here she is a furious killer. 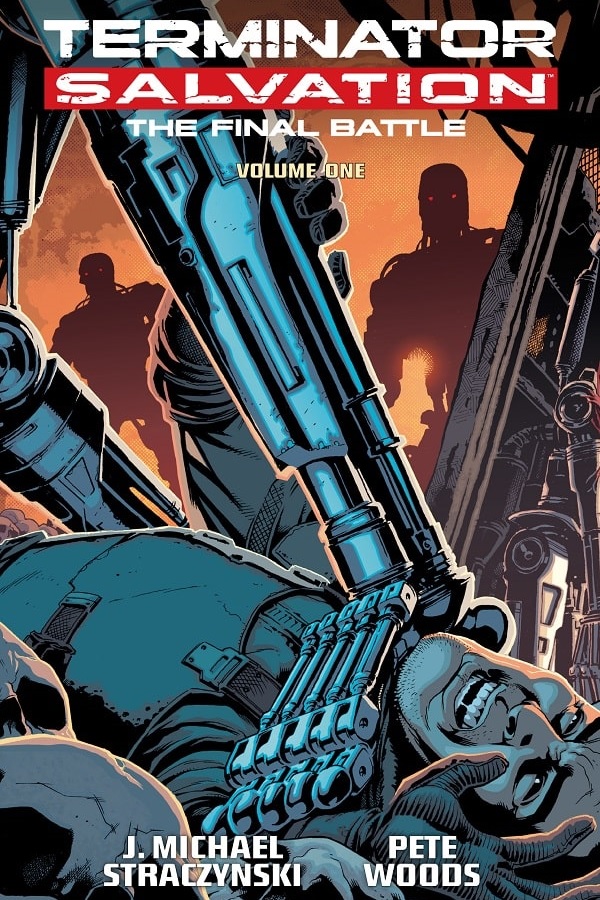 Terminator Salvation: The Final Battle continued where Terminator: Salvation left off. While the movie suffered from the writer's strike which caused inconsistent and convoluted plotting, the sequel was well written and expanded on the events of the movie. In the comic, Skynet experimented on a mind of a psychopathic killer to create a new breed on Terminators. John Connor is still alive and gaining more leadership in the resistance. Terminator: Salvation received 4 tie-in novels as well, which are quite good. 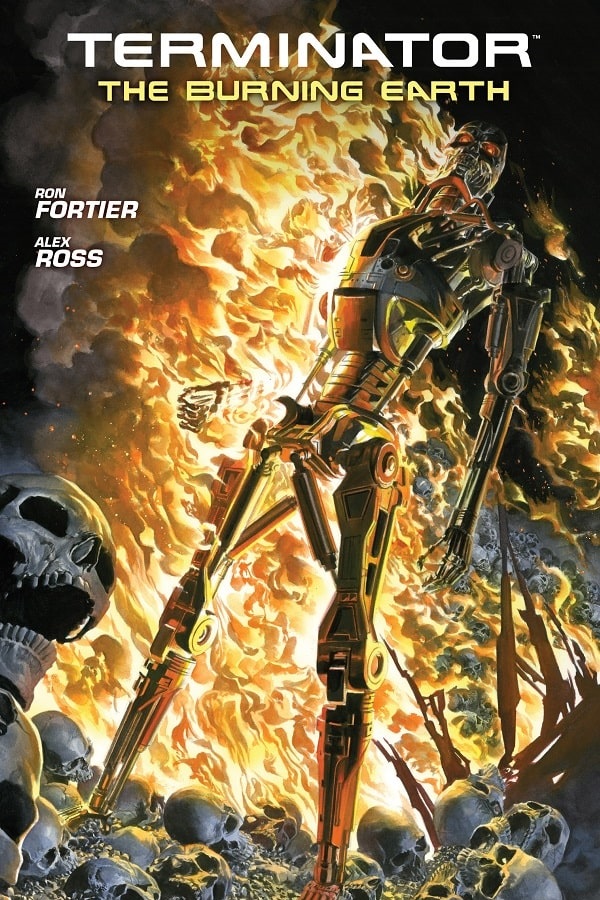 Terminator: The Burning Earth is probably the best Terminator comic ever made. It was published in 1990 by NOW comics before the second Terminator movie was even released. The five-part comic was written by Ron Fortier and art provided by Alex Ross. The distinctive art style by Alex Ross is really great and he met a lot of success later with Astro City and Kingdom Come. The story is set in the future war and there are several sections from Skynet's perspective, which has been very rare in the Terminator mythos.

Want to read more about The Terminator? Check out the list about the best Terminator books.