The Xenomorphs come in many forms and sizes, often depending on the type of the host. While the bigger Aliens can be more aggressive and stronger, the smaller counterparts can be more agile and just as deadly. Here is a list of Xenomorphs ranked by their physical size, including several Xenomorphs from the Expanded Universe like the Alien King and Crocodile Alien. 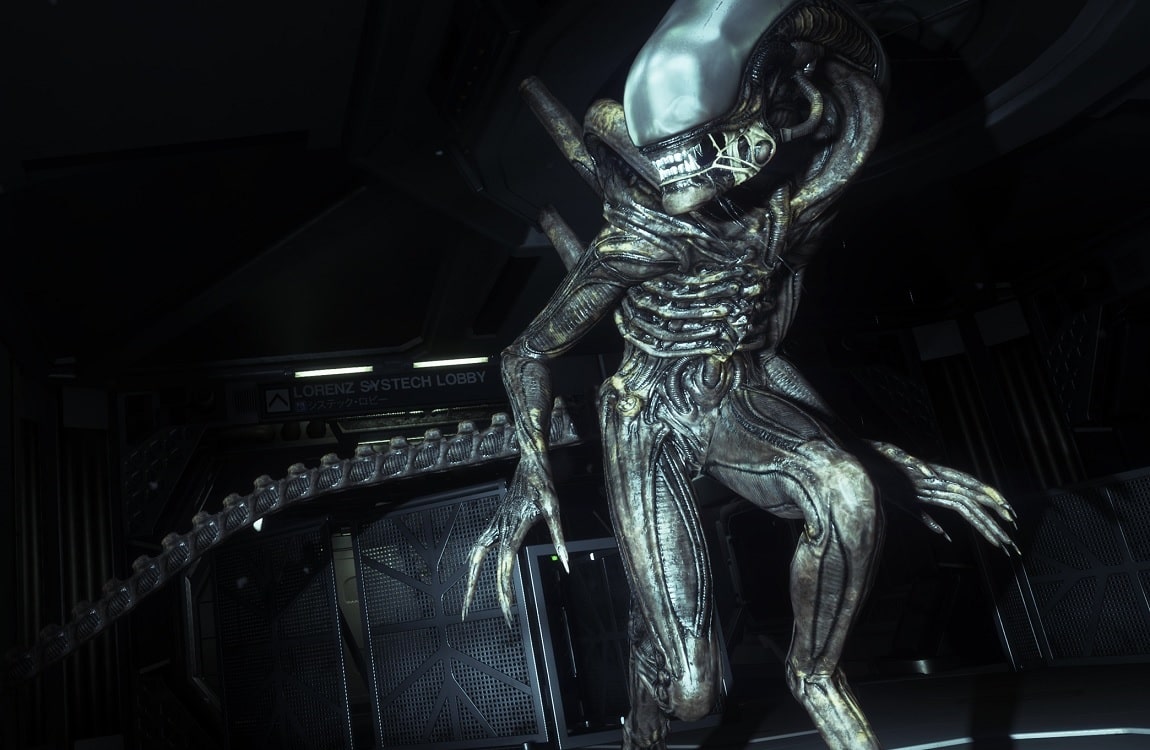 The Alpha Warrior is a large regular Xenomorph born from a human who has grown both in size and experience over a longer period than younger Xenomorphs. They are considered to be the leaders of smaller groups of Xenomorphs and often take on more dangerous prey, like Predators or Engineers. The Grid Alien from Alien vs. Predator can be considered to be an Alpha as it killed 2 Yautja and later was seen to head a group of others. The main Xenomorph from Alien: Isolation is another, being alive for several weeks and killing dozens, if not hundreds, of people on the Sevastopol Station. 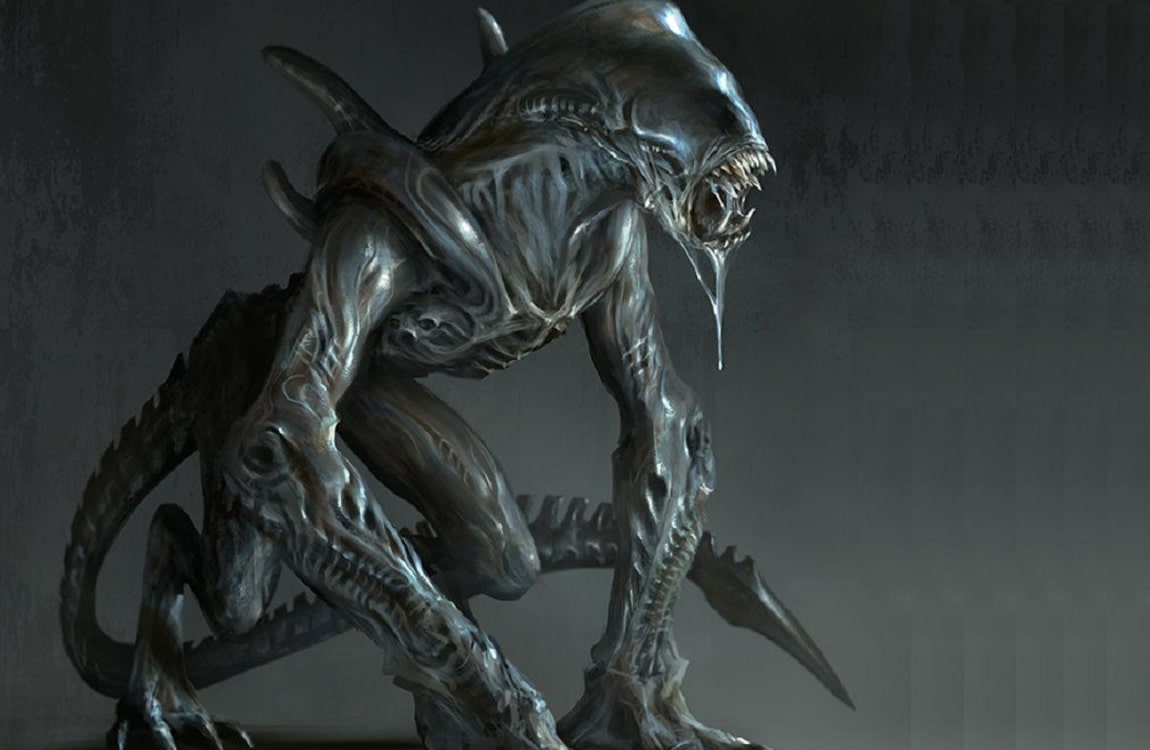 The gorilla is a close relative to humans and a viable host for the Xenomorphs. As they take traits from their prey, the resulting Aliens are larger, bulkier, and tend to walk on all four limbs. They have more physical strength than regular Xenomorphs but are possibly lacking in intelligence. The first gorilla Xenomorph appeared as a Kenner figure in the 90ties with an attached Space Marines mini-comic titled Aliens: Jungle Attack. NECA later made reimagining of the figure which appeared less bulky. The Gorilla Xenomorphs have also appeared in the Aliens: Infestation DS game and were mentioned in Alien: The Cold Forge book, although most of Xenomorphs there were bred from chimpanzees. 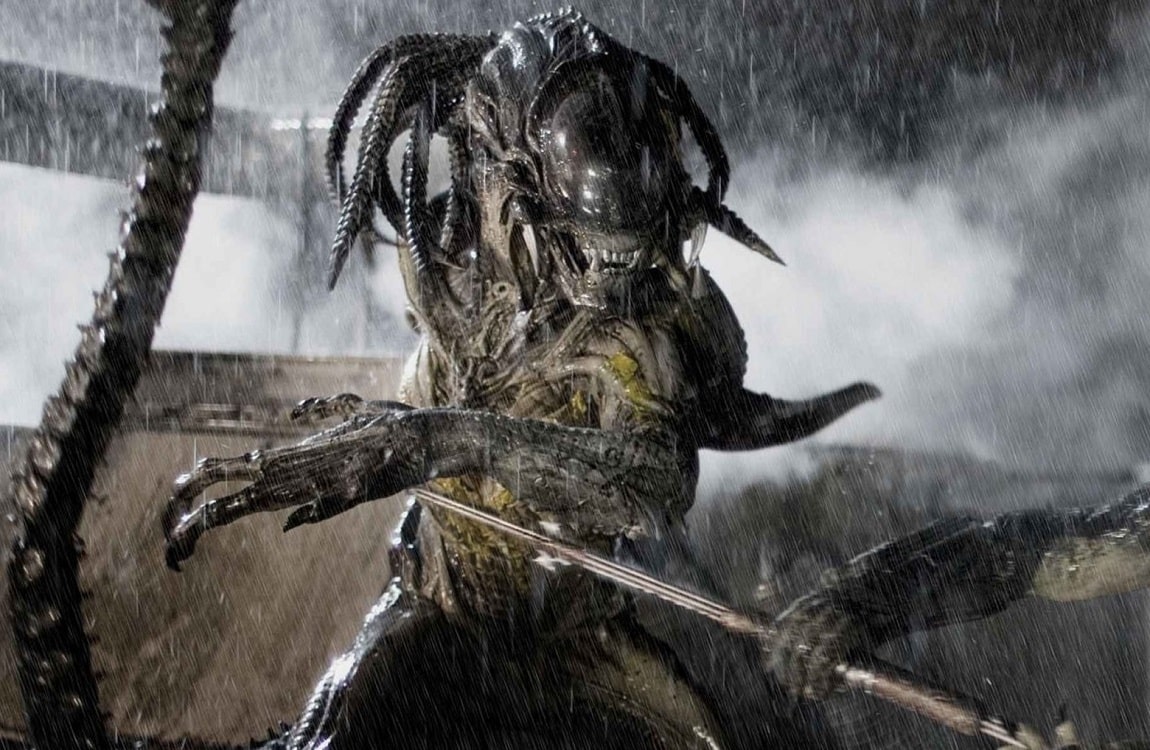 The Predalien is a Xenomorph born from a Predator. The resulting Alien inherits the Yautja's size, aggressiveness and in most cases - their dreadlocks and mandibles as well. The Predaliens are bigger and tougher than regular Xenomorps, but smaller when compared to the Praetorians - the Queens guard. They usually have a mutual blood feud with Predators, who find them to be the greatest insult and an abomination. Therefore they are hunted down in quick order. The Predaliens have appeared in most Aliens vs. Predator games and both movies, but only in a few comic books. 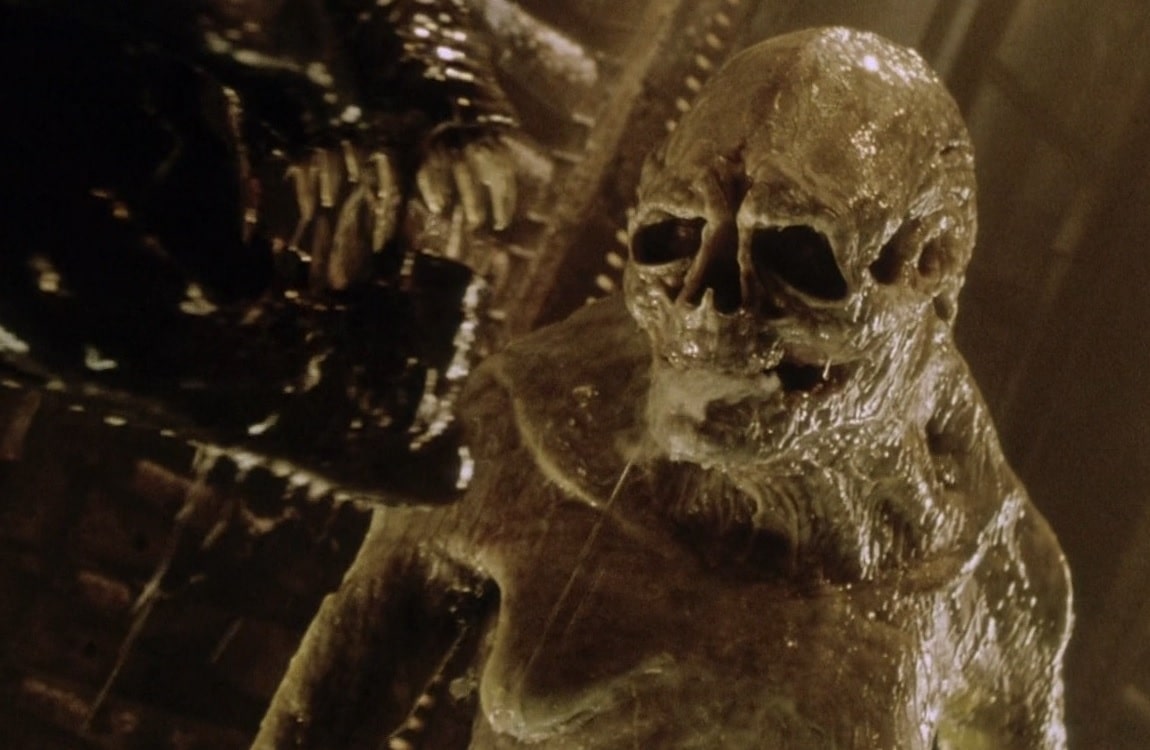 The Newborn was a unique type of Xenomorph only seen in Alien: Resurrection and its related media. It was born from the womb of the Auriga Queen, the cloned Xenomorph extracted from the chest of Ripley 8. The Newborn was huge from the start and was possibly still growing at the end of the movie. It's white skin supports that theory, as chestbursters usually shed their light skin before adulthood. The Newborn expressed great physical strength, but also affection for its presumed mother - Ripley 8. This abnormal Xenomorph never reached adulthood as it was killed by Ripley 8 by sucking it out the hull of the Betty. 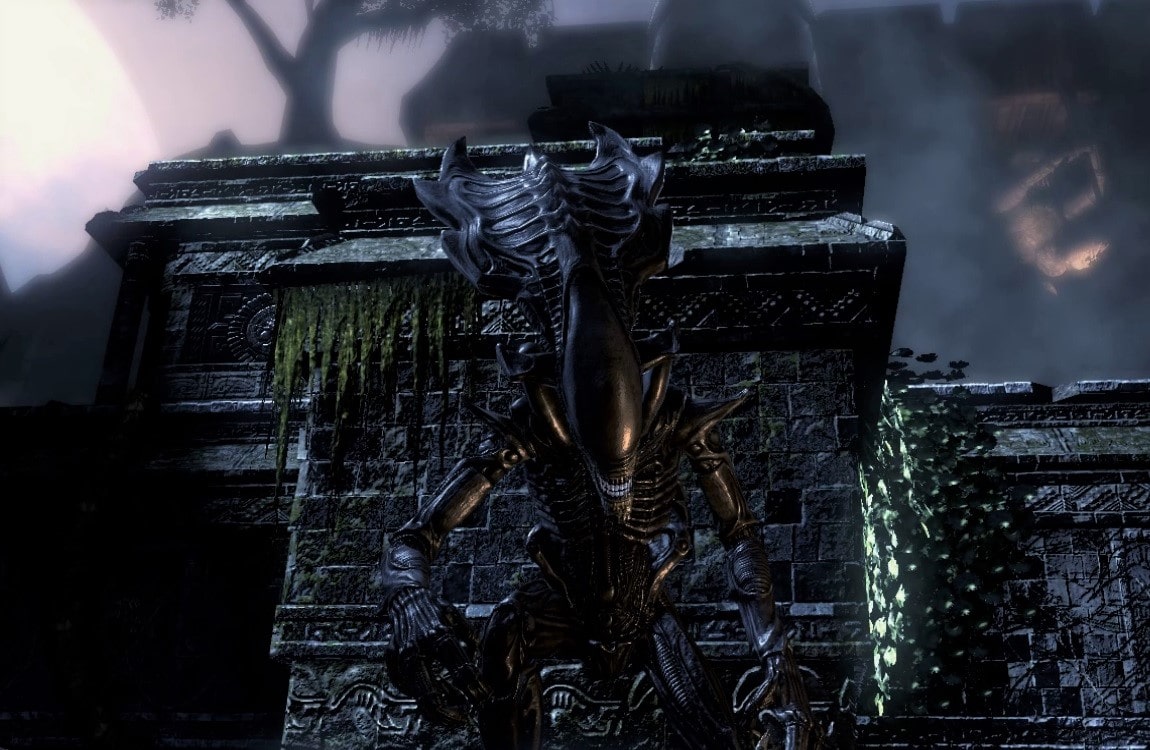 The Praetorian is the Queen's guard and almost matches the Queen in size. A couple of Praetorians are usually near the egg chamber and they need to be dealt with for one to kill the Queen. The Praetorians show up almost exclusively in the Aliens vs. Predator video games, where they are treated as tough enemies for the marines and Predators, and mid-game bosses. They briefly show up in the Aliens: Female War comic as well, guarding the Queen Mother. It is hinted that a regular Xenomorph can morph into a Queen or a Praetorian when the need arises. 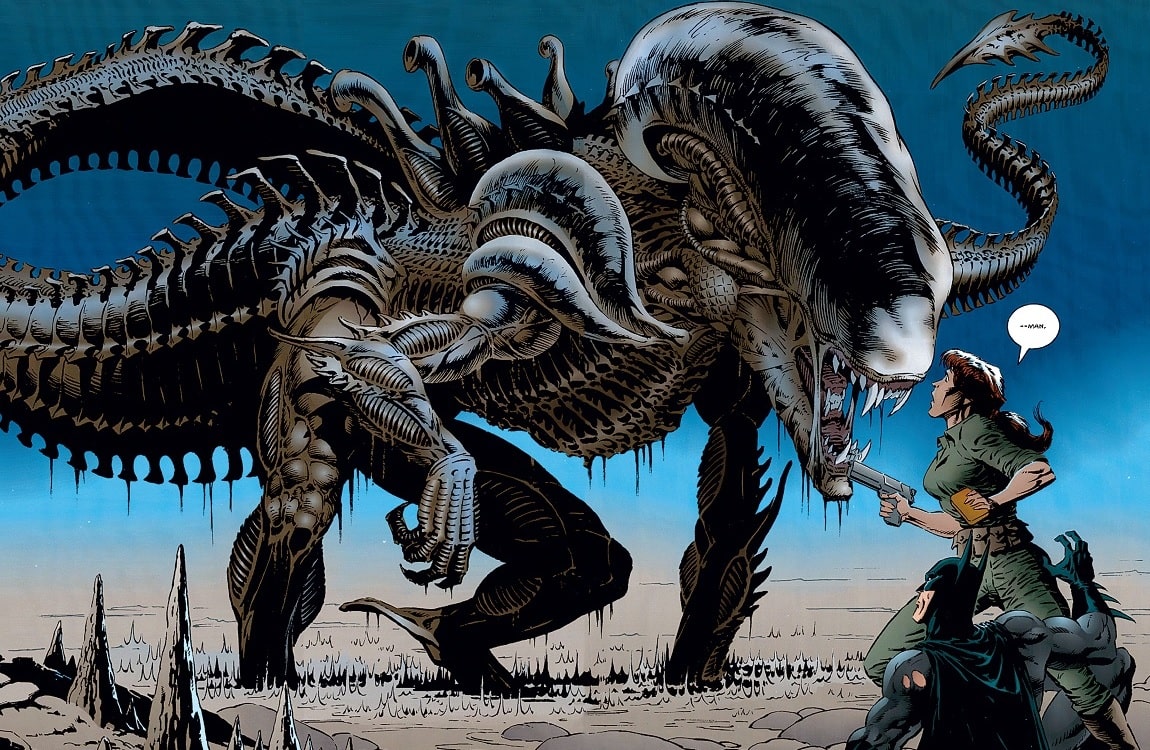 The Crocodile Alien from Batman vs. Aliens was ridiculously large and even bigger than the Praetorian. It inherited a massive tail and elongated jaws from the big crocodile that the facehugger infected. Although Batman vs. Aliens can not be considered canon, it does present an interesting what-if creature. Batman was in trouble fighting this beast in a cave system in the Central American jungles. He had to break his "no-kill" rule by dropping the crocodile Xenomorph into a volcano. 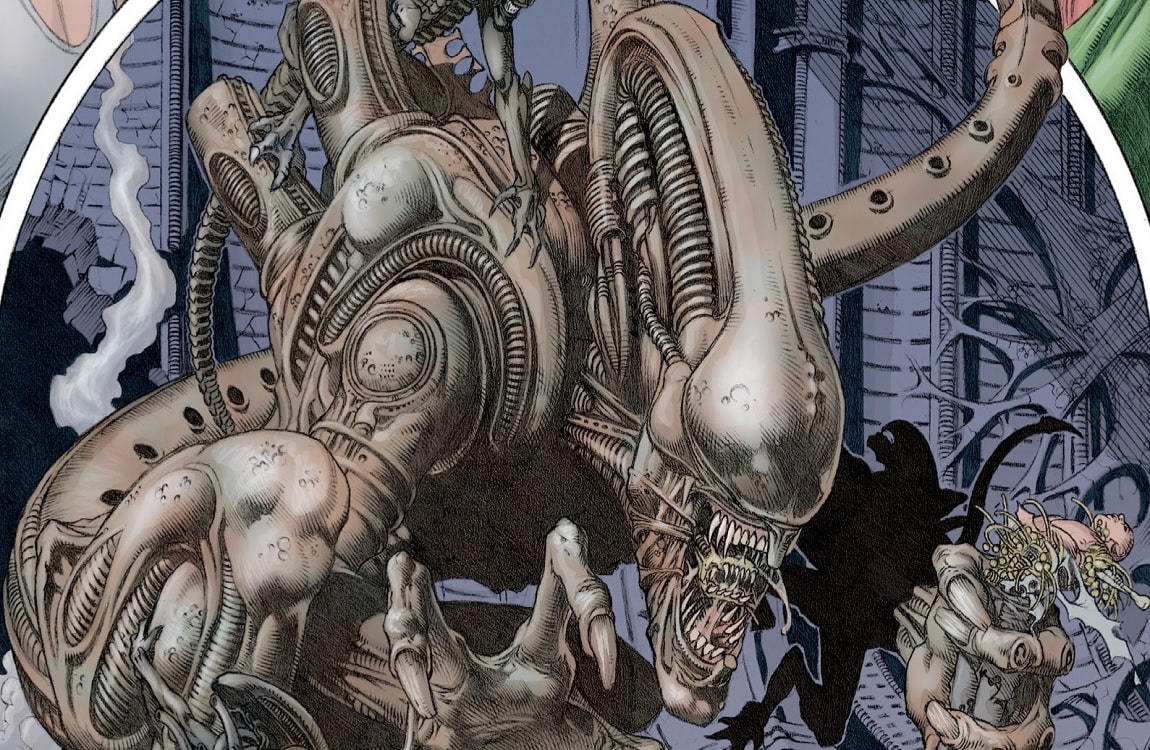 The Space Jockey Alien is a rare occurrence in Alien lore, and a creature with an aura of mystery around it. The first Alien movie already hinted at the creature, with the LV-426 Space Jockey having a big hole in the chest but the Xenomorph itself nowhere to be found. The Space Jockey Alien made a first appearance in the Aliens: Apocalypse comic, where it was a regular looking, but giant Xenomorph warrior. It went on a rampage and attacked both humans, androids, and other Xenomorphs as well. Another giant Space Jockey Alien appeared in the Aliens: Infestation DS game, this time with trunk hanging from its mouth, an inherited trait from the host. The Deacon from the end of Prometheus can also be considered a Space Jockey Alien, but it was born from a different breed of facehugger. 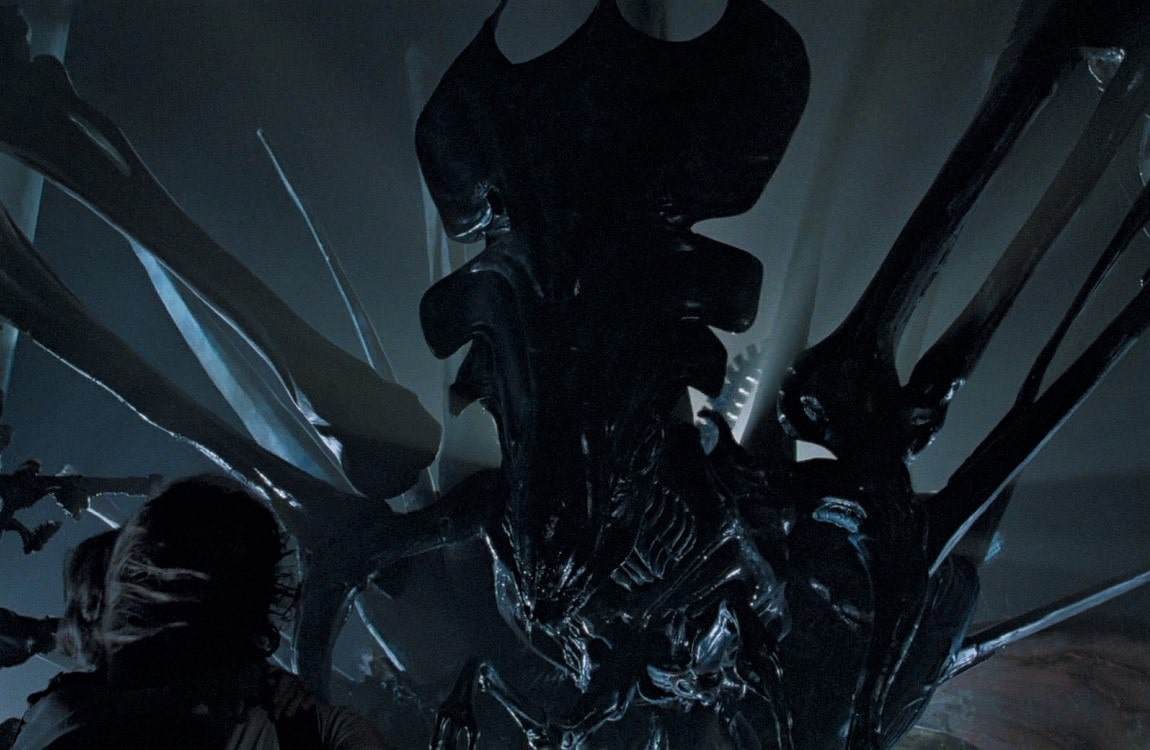 The Alien Queen was the biggest Xenomorph before the Expanded Universe appeared and introduced new Xenomorph types. The Queen Xenomorph is the leader of the hive but also the mother of the eggs and the facehuggers inside. She is even bigger in her egg-laying position, with the egg sack attached to her underside. There are also huge spikes holding them all together in place, which forms a throne-like appearance. When in need, the Queen detaches herself from the egg sack and becomes a formidable and agile fighter, ready to protect her young. The Queen first appeared in Aliens and was the invention of James Cameron. 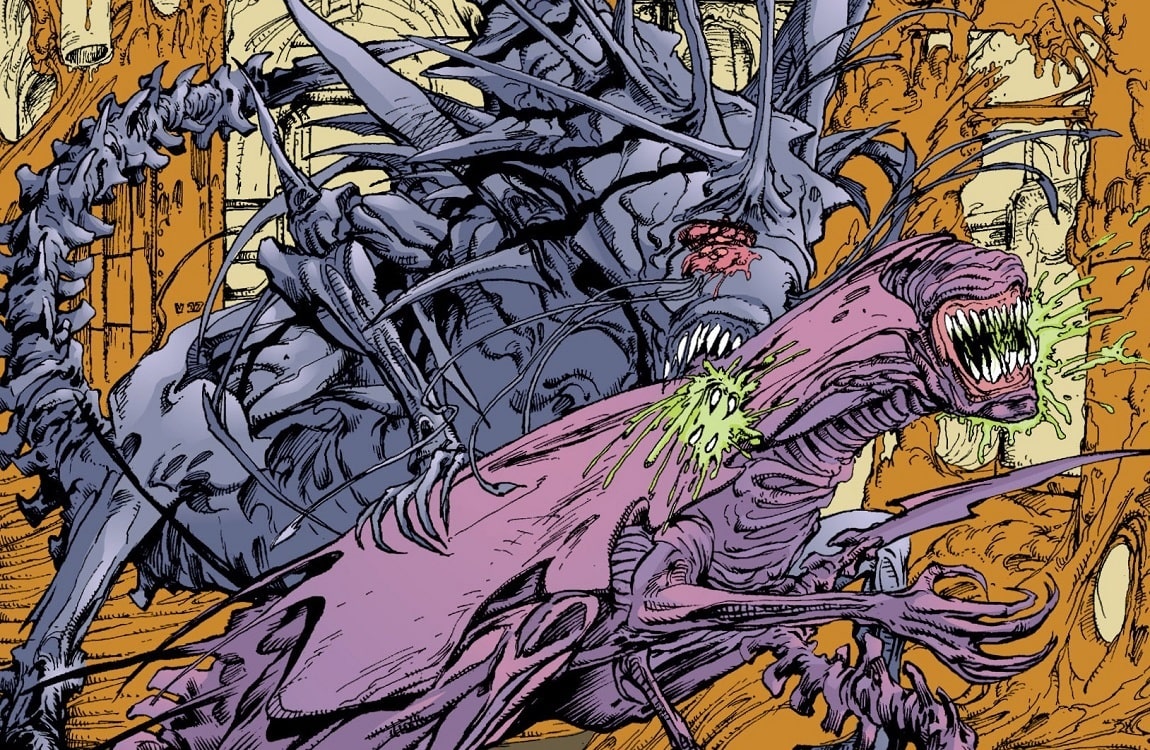 The Alien King is not a natural Xenomorph type, but an experimental creation of the mad doctor Ernst Kleist in Aliens: Rogue. It was bred on Charon Base to be a bigger and tougher version of the Alien Queen, and a new leader of the Alien hive. The Alien King soon escaped its holding cell and forced itself into an Alien hive, eager to meet the Queen. While it would have been interesting if the King and Queen decided to mate, these specimens had a fierce fight instead. The King had the upper hand at first, being stronger and more aggressive. However, the Queen was more intelligent and agile. The Queen won the fight, proving herself to be the true leader. Charon base was destroyed soon after, wiping out any trace of the Alien King. 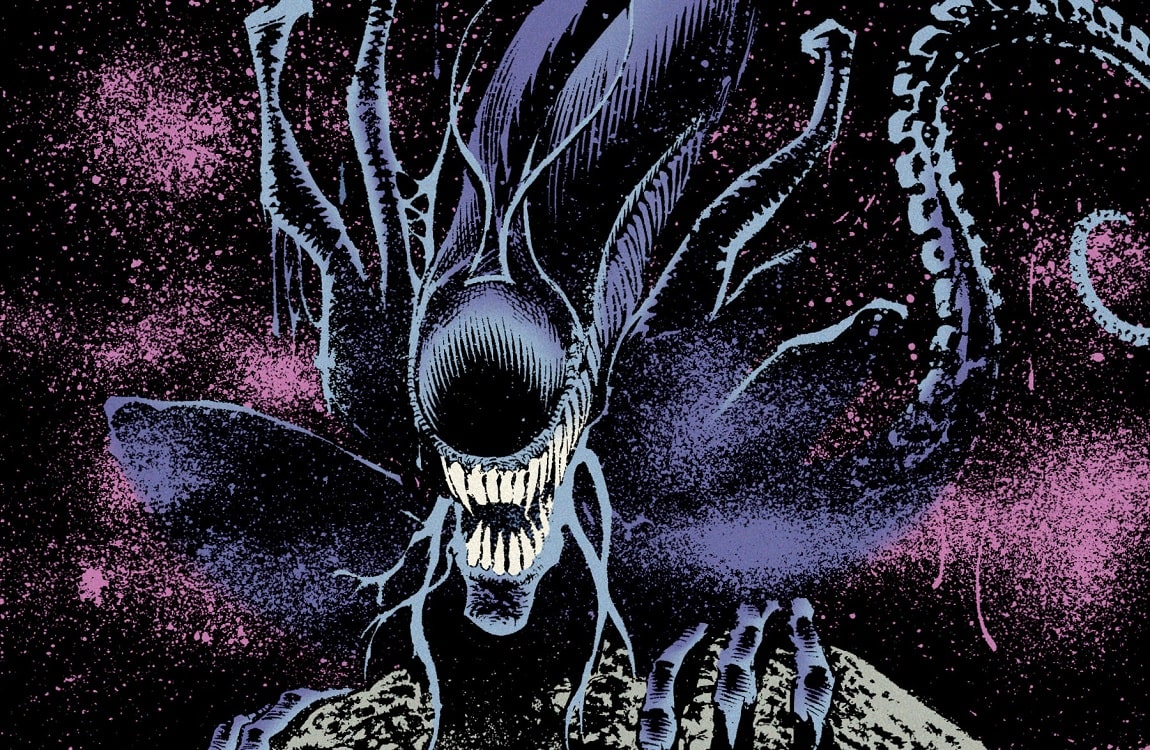 The Queen Mother was the presumed ruler of the entire Xenomorph species and was located on the Xenomorph homeworld. She was most likely the biggest Xenomorph ever and probably the most dangerous as well. She had a telepathic link to other Xenomorphs and could project her thoughts into the dreams of humans as well. In Aliens: Female War, the Queen Mother was taken from Xenomorph prime by a group of mercenaries and brought to Earth, which was already infested by an Alien invasion years before. As all the Xenomorphs flocked to see their mother, nukes went off beside the swarm and cleared Earth from the Alien scourge.

Did you enjoy the list and want to know more about the Xenomorphs? Check out the list of the best Aliens comics and look over the overview of Xenomorph vision.