The Xenomorphs have crossed over not just with the Predators, but with several other comic book characters, with most of them from the DC universe. In preparation for the upcoming Marvel crossovers, here is a ranked list of the best Aliens crossover comics, including old classics like Batman vs. Aliens and Judge Dredd vs. Aliens. 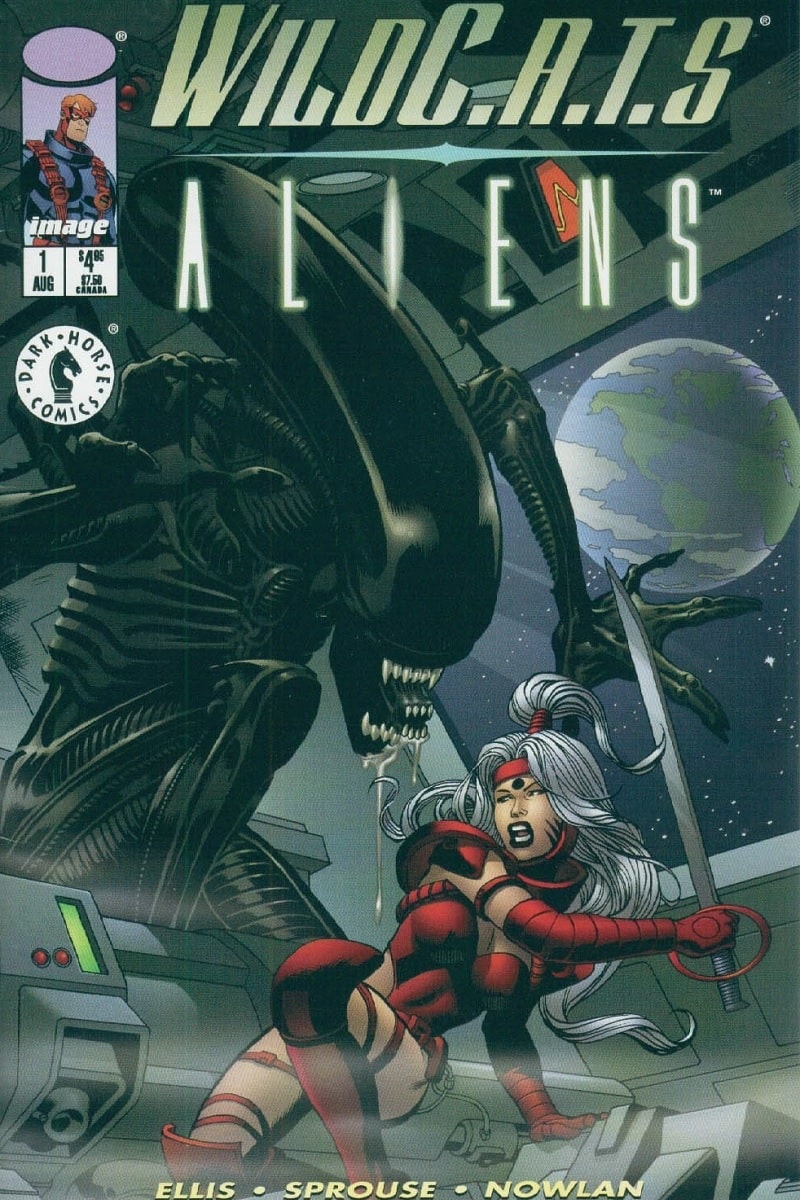 The WildC.A.T.S/Aliens crossover happened during the heyday of Image comics in the 90ties and the one-shot issue was written by veteran Warren Ellis. Ellis was not happy about the crossover but came around when he heard he could kill of any character of the WildC.A.T.S superhero team he wanted. In the story, the WildC.A.T.S board a space station in Earth's orbit and help to find any survivors of an Alien infestation. After several run-ins with the Alien swarm, one of the team members sacrifices himself to pilot the station into the Sun, saving Earth. This is probably the weakest of the Alien crossover series, with both generic story and artwork, and with a relatively unknown team of heroes.

9. Buffy the Vampire Slayer: In Space No One Can Hear You Slay! 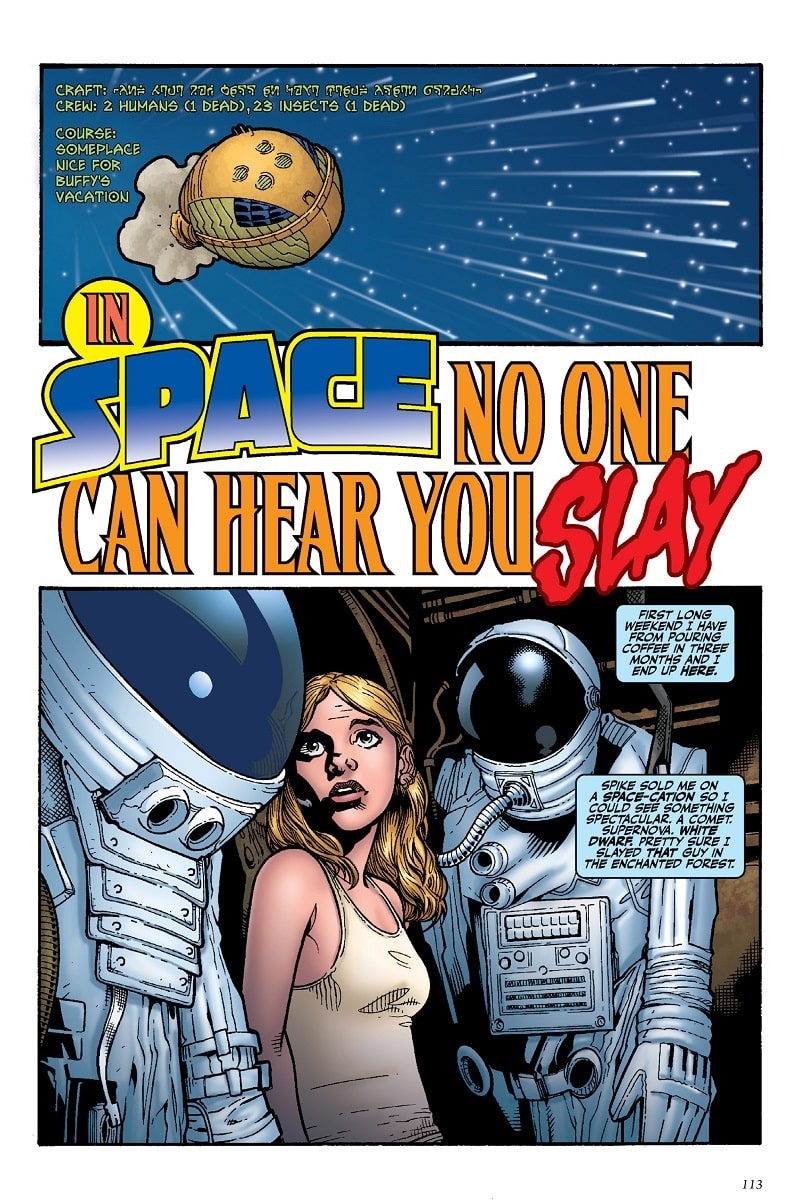 When the Buffy The Vampire Slayer tv show ended after 7 seasons, her story continued in the comics, still being written by series creator Joss Whedon. In the comic collection titled Buffy the Vampire Slayer Season Nine, she had a short crossover with a Xenomorph. Buffy took a vacation from Earth which was recommended by Spike and resided on a space station. She was soon stalked by an Alien, a crossbreed with a vampire. All Buffy had to do was expose the creature to sunlight in a space solarium, and it evaporated in a cloud of acid, not able to harm anyone. 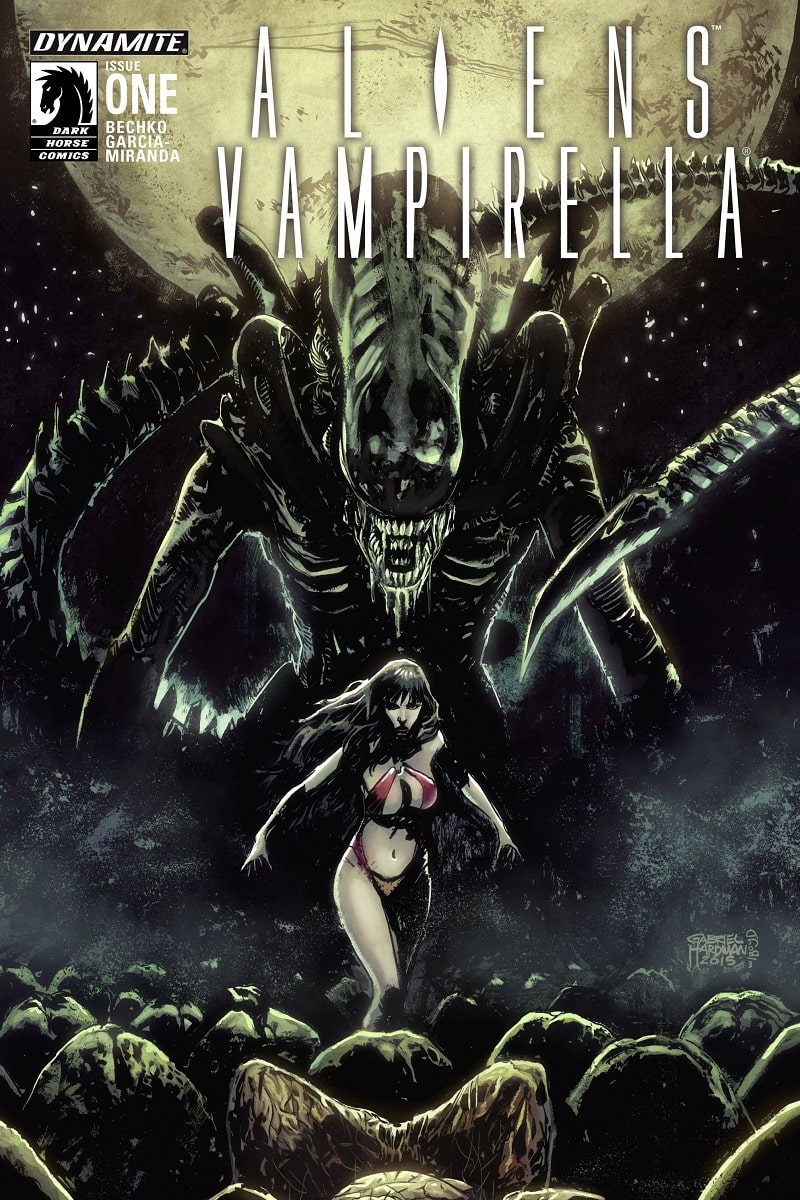 Aliens/Vampirella features the only known case of a chestbursting with the host living afterward (without any surgical procedures). In this crossover comic, Vampriella investigated an underground excavation on Mars after the humans successfully colonized the planet. Of course, a pile of Alien eggs is found, and Vampirella became facehugged. After the Xenomorph emerged from her chest, she drank the blood of a nearby human and fully healed the hole in the chest. The chestburster itself grew into a large mutated beast with wings, traits inherited from Vampirella. Vampirella helped a small group of survivors blow up the base and escaped in a spacecraft. 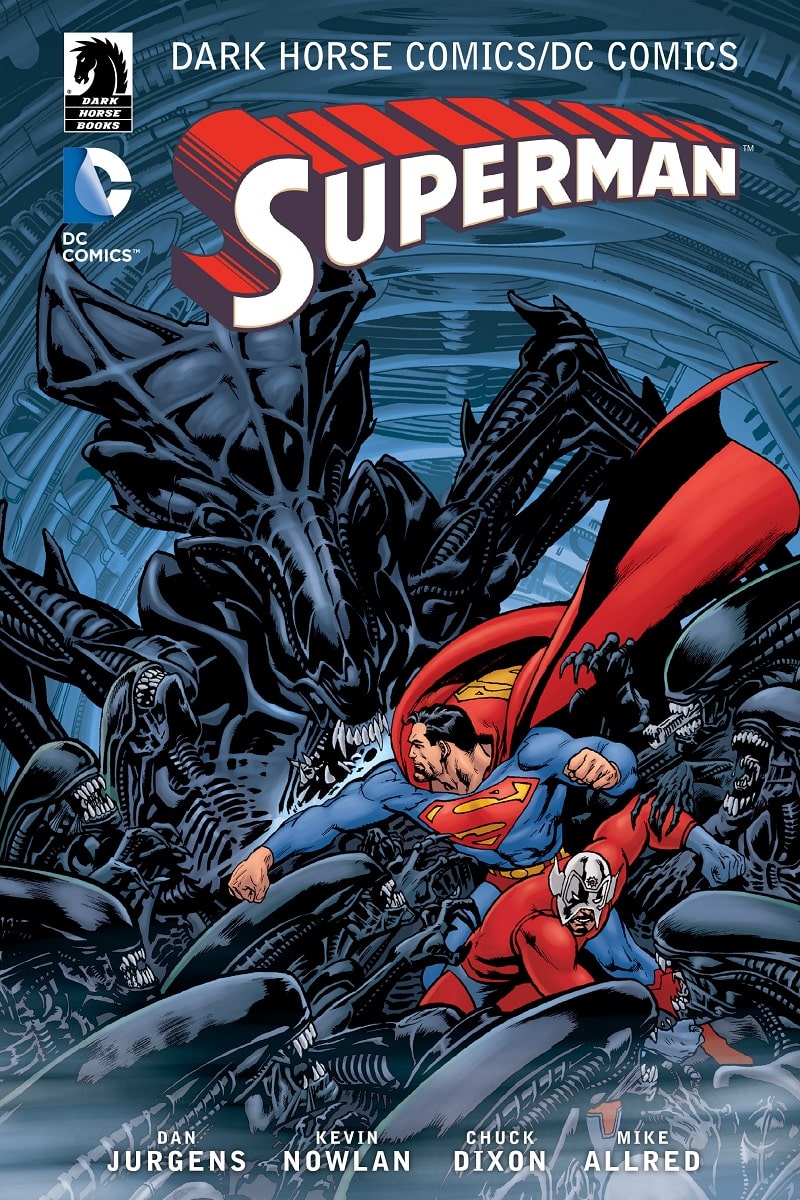 In order for Superman to fight Aliens or Predators, some kind of plot device needs to make him weaker. In Superman vs. Aliens, Superman loses most of his powers by being far away from the Sun visiting an old Kryptonian colony. The colony was obviously infested by Xenomorphs and the Man of Steel joins forces with Kara, a lone survivor. Superman was facehugged himself and carries an Alien embryo through most of the story. At the end, the colony is blown up, and Superman returned to Earth in an escape pod. Being close to the Sun, he immediately felt his powers return and his body ingested the Xenomorph parasite inside. 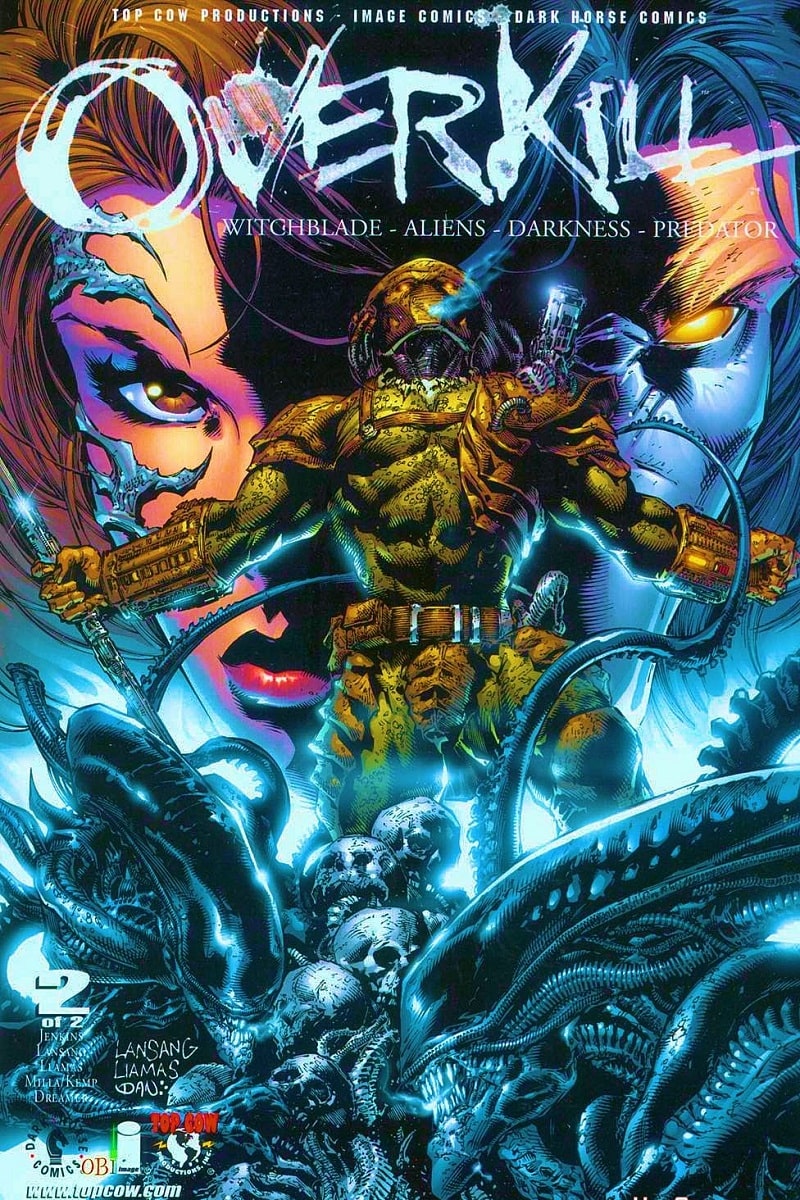 The Darkness series started out as a spin-off from Witchblade, with Jackie Estacado being a former mob hitman and become a host for Darkness. Of course, Alien and Predator crossed over before, so the Overkill: Witchblade/Aliens/Darkness/Predator crossover event does not seem so major as it seems. In this two-part series, Aliens were loose in New York City and the Predators came to hunt them down. Jackie Estacado joined forces with Sara Pezzini (Witchblade) to stop both of these forces from wrecking the city. The artwork in the series looks great, especially the Predators. 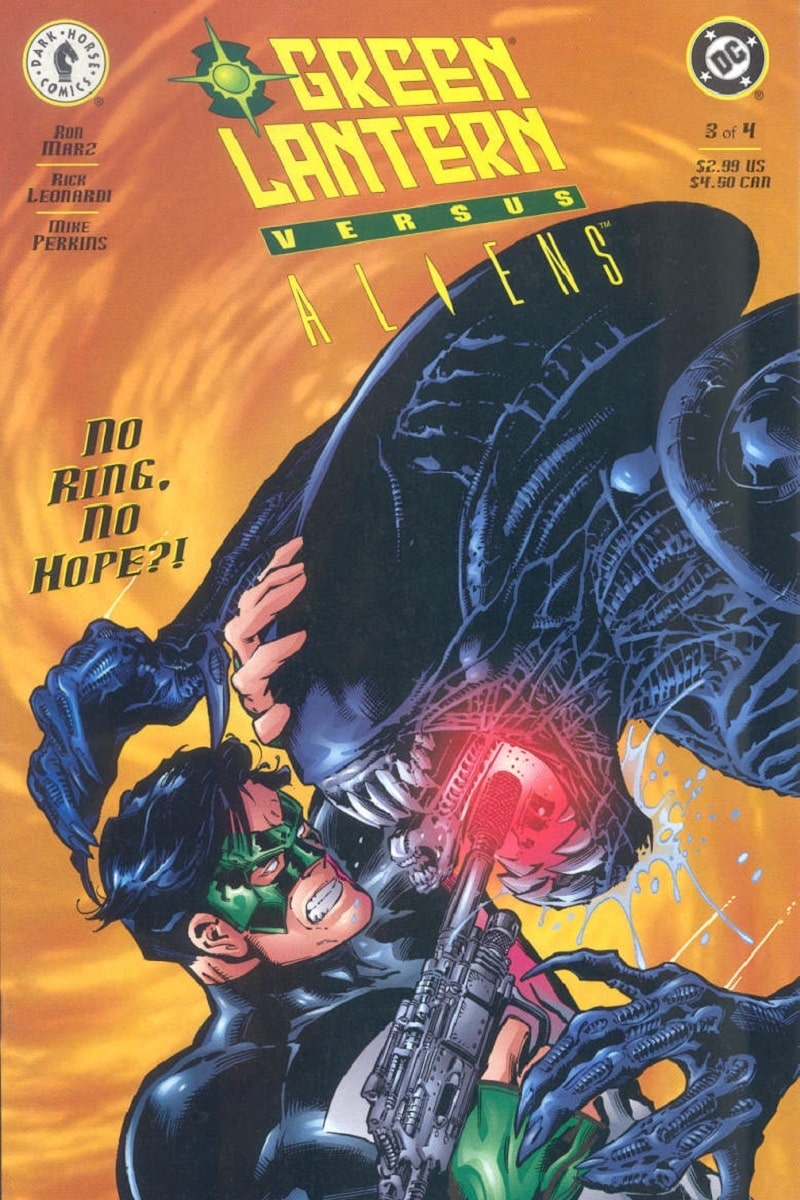 Green Lantern versus Aliens is the third time that Aliens fought a major JLA member, the others being Superman and Batman. Hal Jordan's space adventures seem to somewhat fit with the Xenomorphs, but his colorful style does not. The series proposes an interesting question - should Green Lantern use the power of the ring to destroy the Xenomorph race? Hal Jordan left them alive at the start of the series and stranded them on a remote planet. When they escape and cause havoc a decade later, Jordan decided to eradicate the Xenomorphs this time as they are too dangerous to be left alive.

4. Aliens vs. Predator vs. Terminator 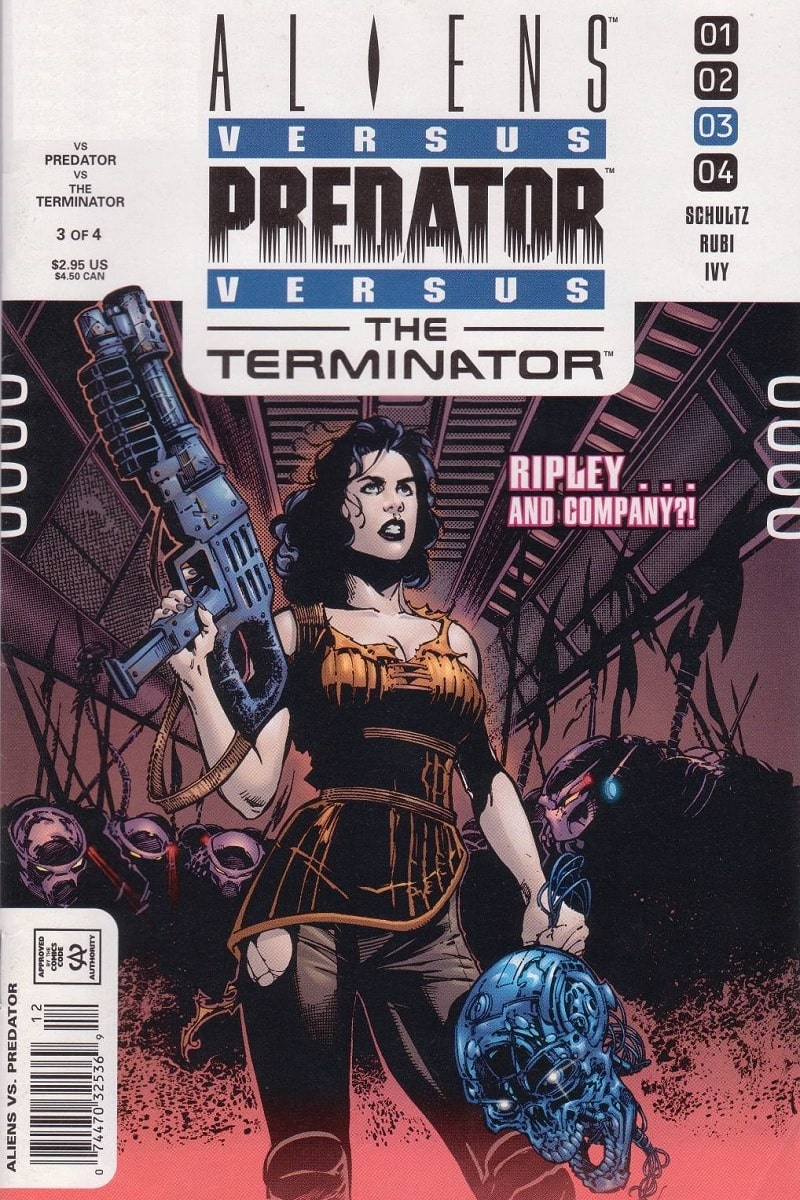 Alien vs. Predator vs. Terminator is a 4 part comic series that finally brought the 3 franchises together. While most of the Terminator stories involve traveling to the past, this crazy series takes place centuries in the future. It even involves Ripley 8 and Call from Alien Resurrection, one of the few Expanded Universe stories to do so. There are insane things like a Terminator-Alien hybrid, super soldiers, and Crypto-Terminators. You have to read it to believe it. 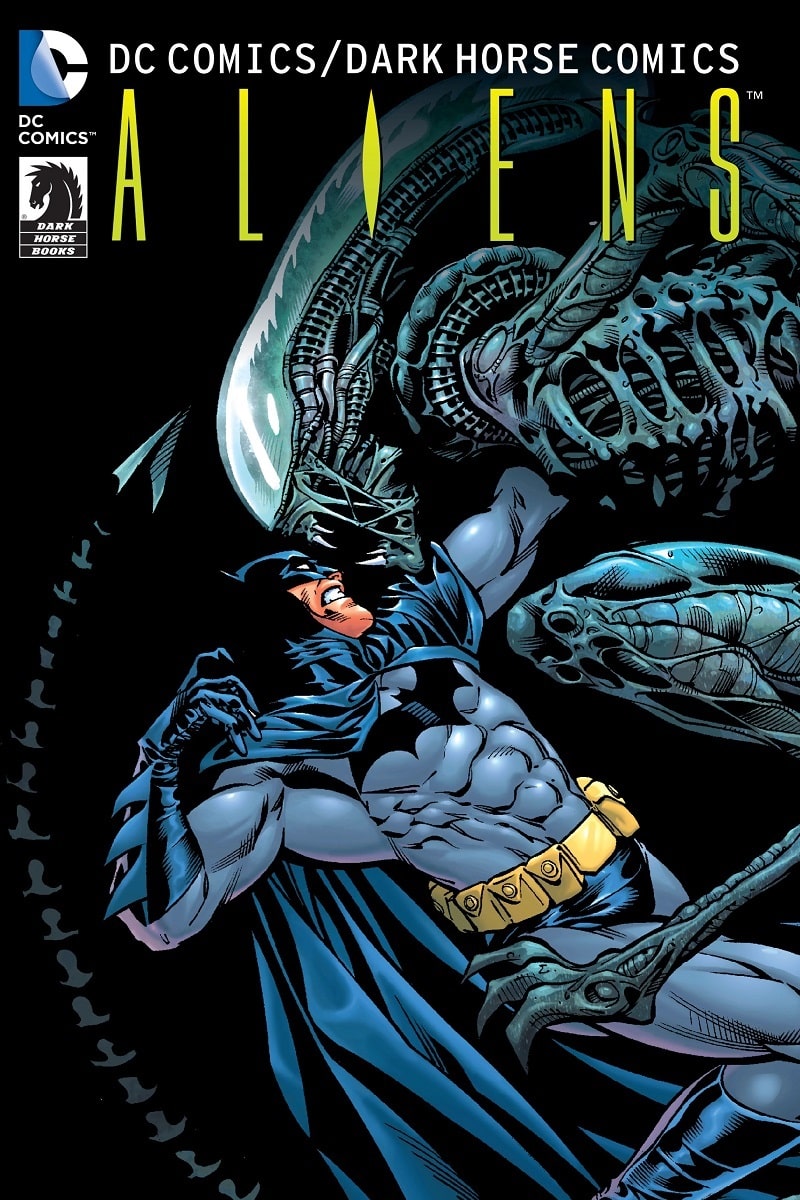 Batman vs. Aliens is not as good as Batman vs. Predator, but it is a worthy entry in the crossover line of comics. The story takes Batman to the jungles of Mexico in search of a lost Wayne Enterprises geologist. There he found a crashed ship with Alien eggs and soon several Xenomorps were hatched. Perhaps the most interesting thing in the comic is th Crocodile Alien, a giant beast almost as big as an Alien Queen. The Dark Knight had no choice but to drop into a volcano. A sequel, Batman/Aliens II was released years later, and took the weird route of having Xenomorph hybrids of Batman's villains, including the Joker Alien. 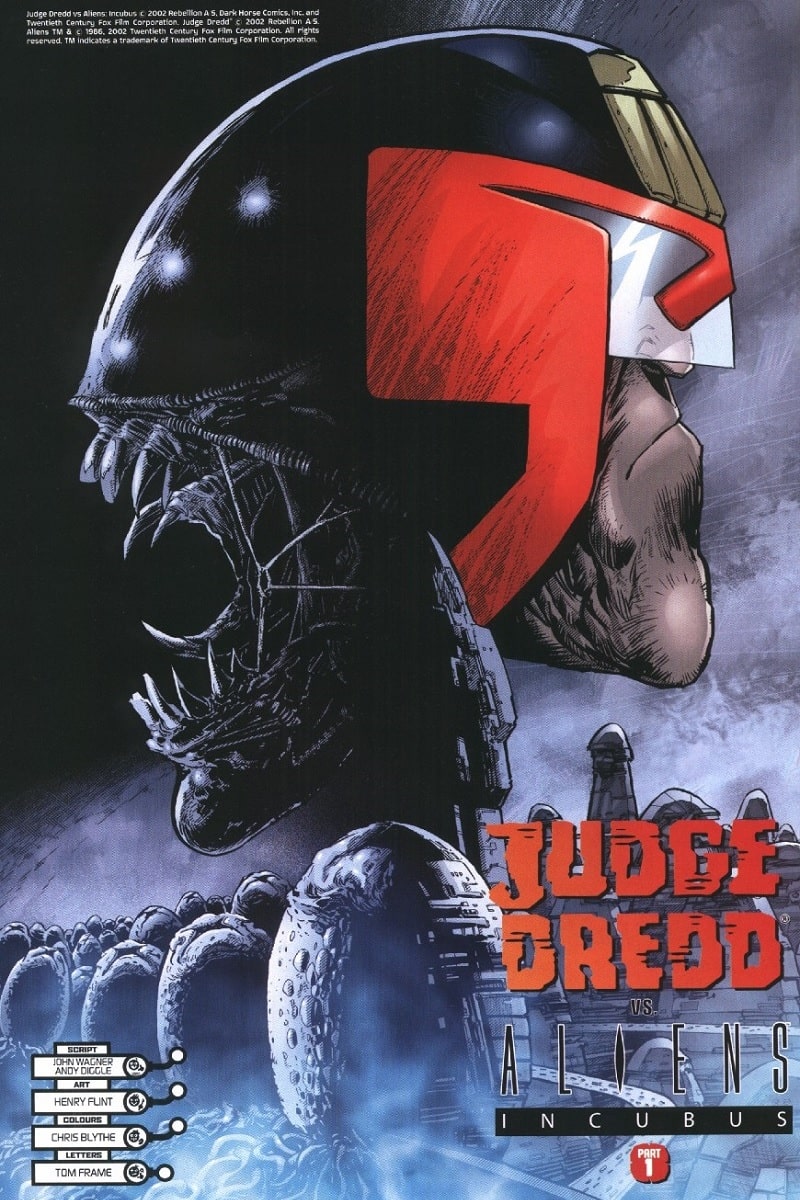 Judge Dredd killed and arrested all kinds of exotic creatures during his career, but he first met the Xenomorphs in Judge Dredd versus Aliens: Incubus. In the story, a crazed madman called Mister Bones raised an Alien army in the undercity, and unleashed it into the upper levels of Mega-City One. First the Aliens were loose in the Eisenhower General Hospital, and later threatened the Grand Hall of Justice. Judge Dredd descended into the undercity, got facehugged himself, fought the Alien Queen, and finally killed the Aliens with a giant lava flow. At the end, his embryo was surgically removed, one of the few cases this is successfully done in the Aliens series. The story is canon from the perspective of the Judge Dredd universe, but not from the Aliens universe. 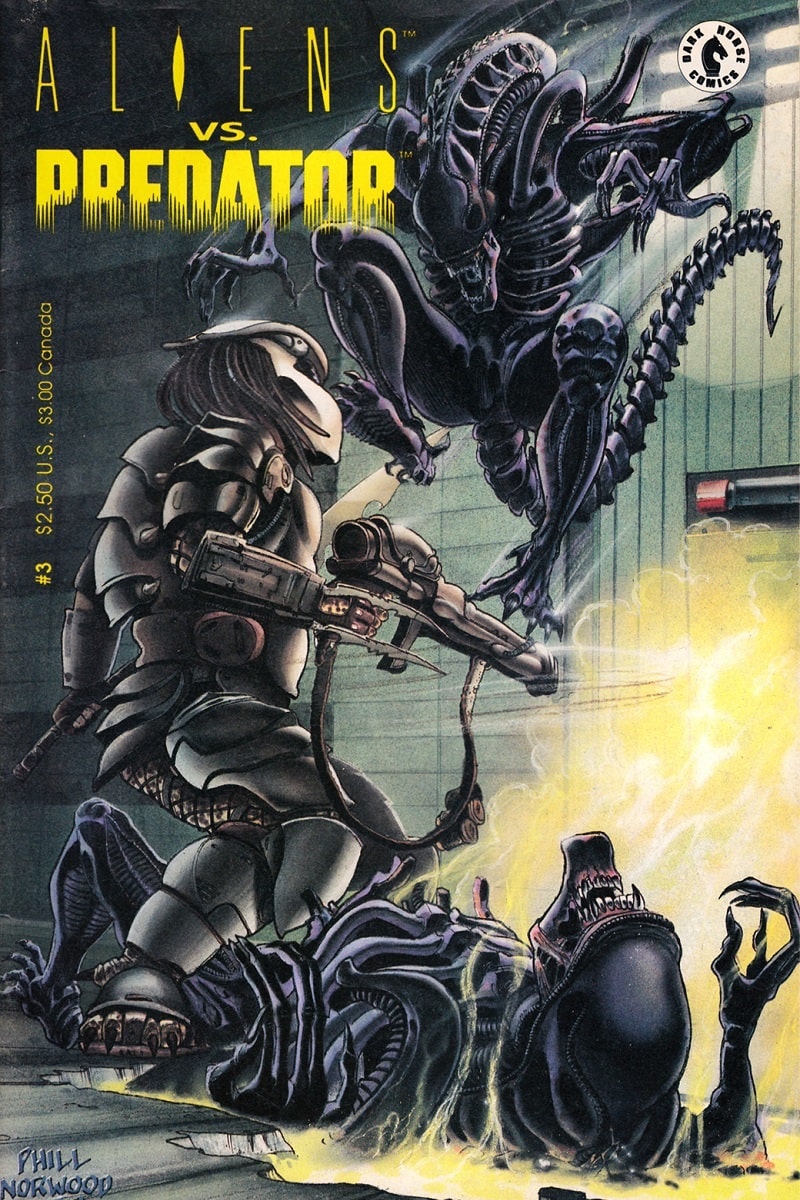 The Aliens vs. Predator comic series was the first crossover comic for both species and an important start for a new series. For the Alien series, it introduces some interesting concepts like a captured Queen laying eggs for the Predators and Xenomorphs being born from other species (the rhynth). The artwork is decent and the main characters - Machiko Noguchi and Dachande are quite badass and easy to root for. The comic was very influential and formed the basis of the first Alien vs. Predator movie released in 2004.

Want to know more about the Alien vs. Predator comics? Check out the list about the best Alien comics and look over the different Predator crossover comics.